designboom visited the quaint town of mikulov in the czech republic where the first křehký mikulov festival is taking place until august 15th, 2011. this inaugural event has been a collaboration between the regional museum of mikulov and křehký gallery, curated by křehký founders jana zielinski and jiří macek. their vision for this undertaking is to offer a celebration of ‘art design’ outside the chambers of the city, in a place where history, vineyards, a rolling landscape and creativity can come together on a different level. for this first presentation zielinski and macek wanted to represent their own personal selection of czech objects straddling the border between art and design, which have recently impacted them. the discussions of hosting an event in mikulov, approximately 250 km from the country’s capital prague, began two years ago, while zielinski and macek were visiting with good friend and mikulov native, czech ceramicist daniel pirsc.

on this occasion, the duo has curated 6 individual shows within the space of the historic mikulov castle: ‘křehký stories’, ‘1340 ℃’, ‘treasure hunt’, ‘miracles archive’, ‘ivan jelínek’ and ‘view’, each exploring the notion of story telling and the importance of maintaining personal memories, bringing together functional objects designed to convey a sense of emotion and which create a dialogue between the past and the present. 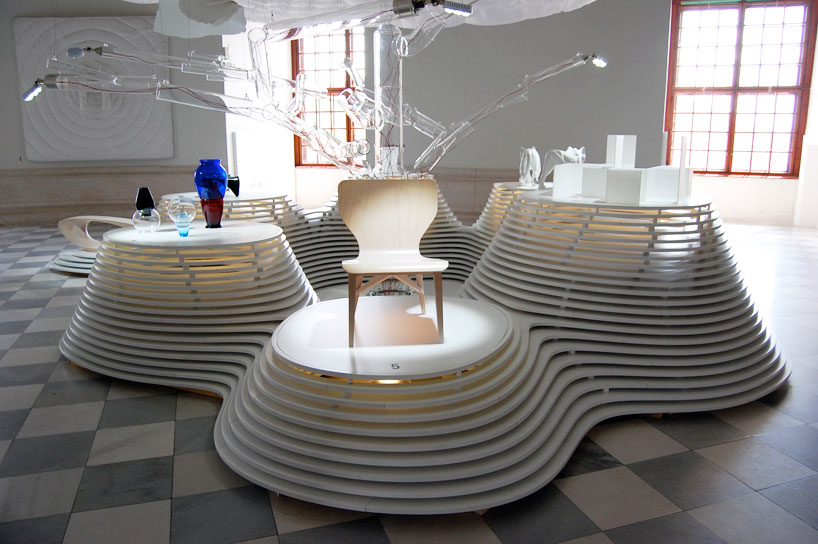 originally curated by zielinski and macek on the occasion of the shanghai expo 2010 for the czech republic pavilion, the ‘miracles archive’ presents ten selected projects by a range of creators from product and fashion designers, architects and a photographer, each one in someway meant to summarize our subconscious desires and dreams. the works on show explore such themes as childhood, flying, image, infinity, light, motion and silence from individual perspectives. 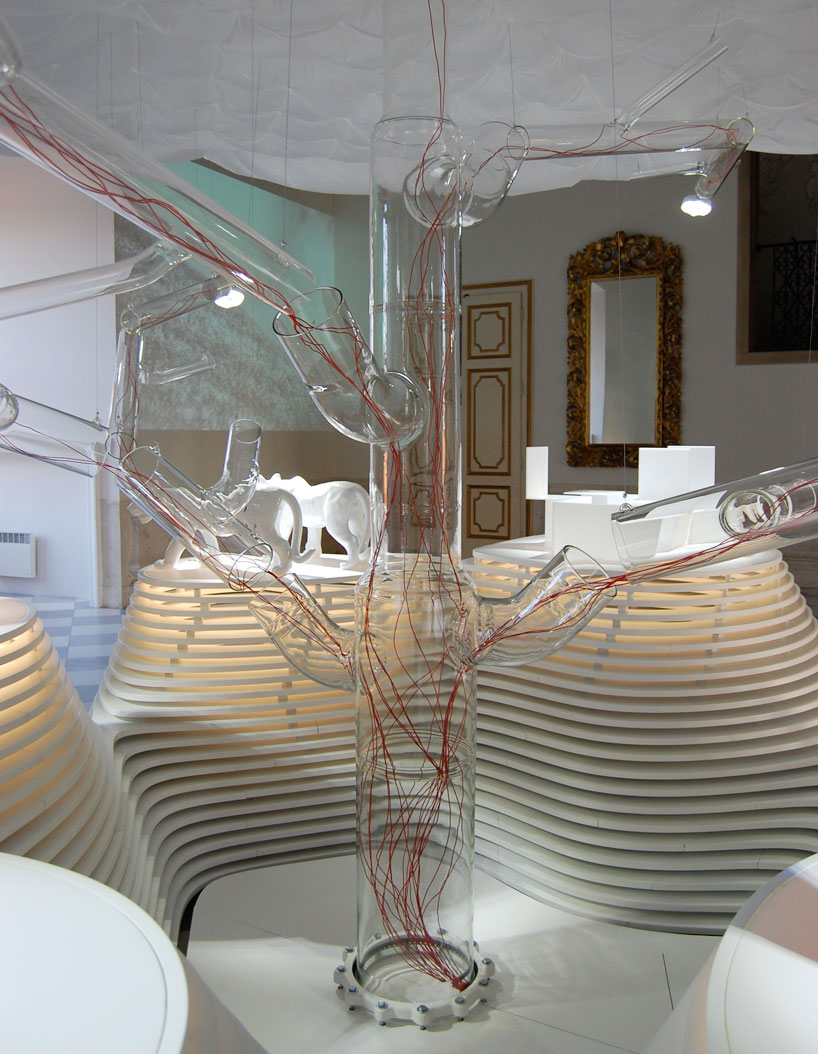 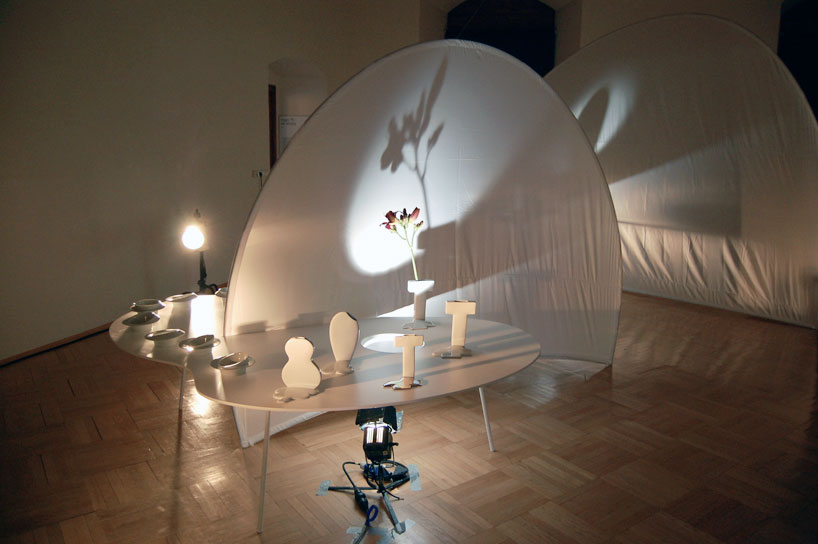 czech ceramist daniel pirsc‘s ‘1340 ℃’ in the shade exhibition is meant to lead viewers to the procedure of burning the porcelain mass. all the objects are hand-made by pirsc, and the show is a display of intricate vases, statues, interior sculptures etc., set against against large studio light reflectors which cast shadows of the objects, setting a moody atmosphere. while in mikulov, designboom visited pirsc’s studio. see the full story here. 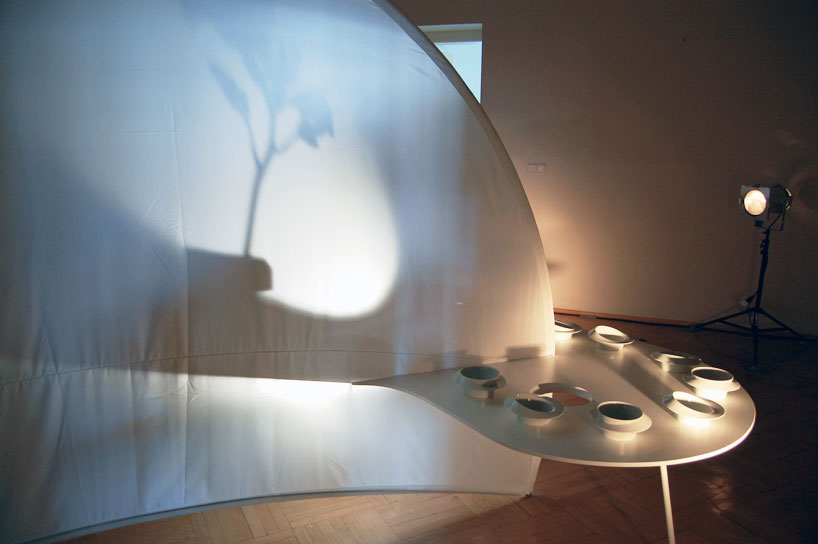 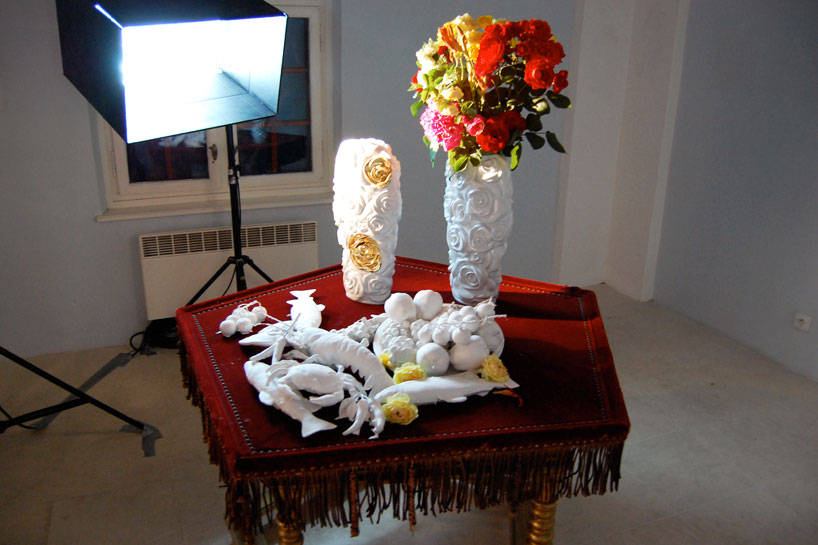 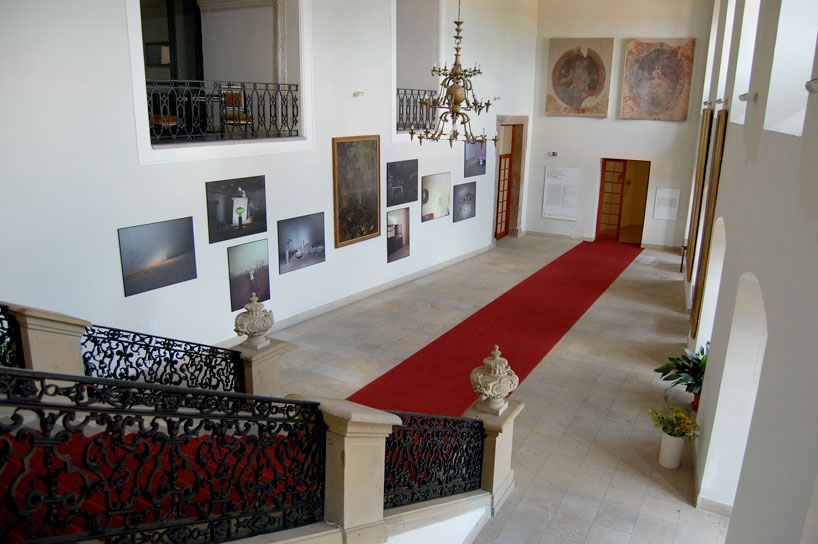 within the main hall of the venue, a series of photographs by salim issa under the title ‘view’, are hung along the wall amidst old, traditional paintings, blending contemporary art with the history of the region. for this body of work, issa approached the křehký gallery owners to borrow pieces from the collection and photograph them in settings in which it appears that they are ‘living their own lives’. 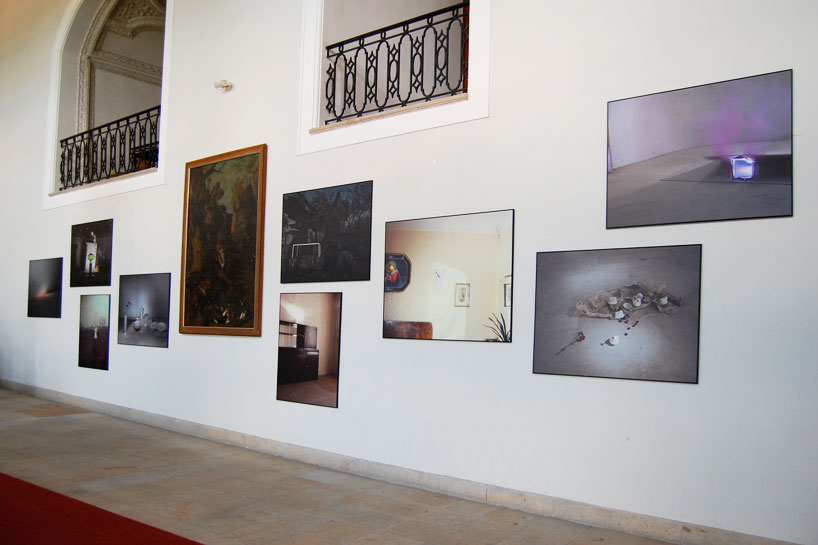 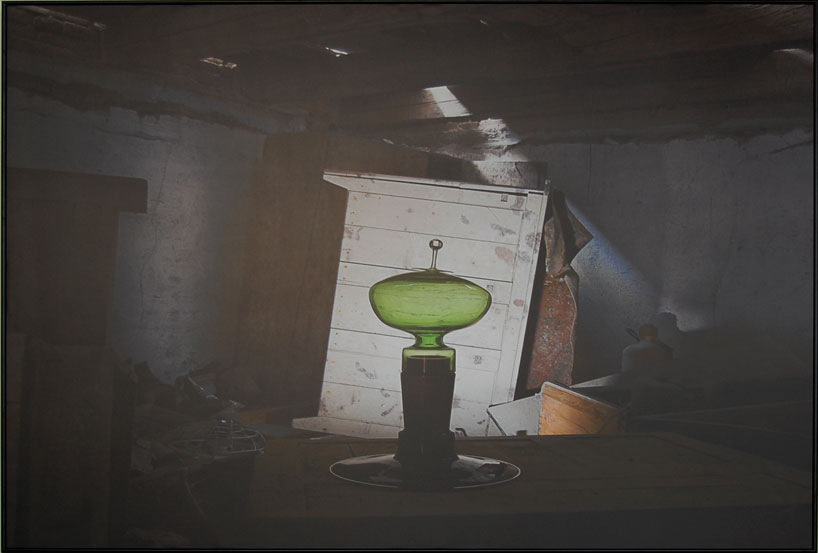 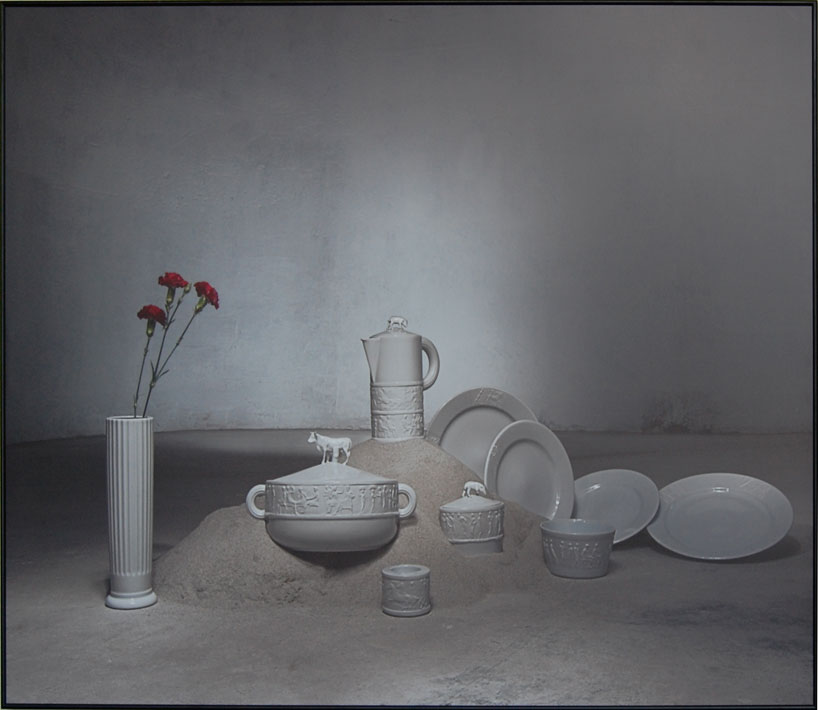 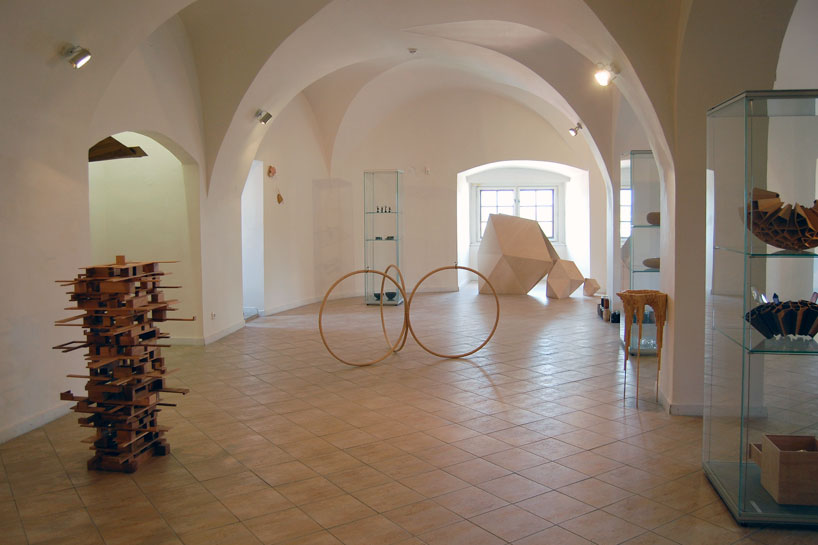 ‘treasure hunt’ was first conceived for the pinakothek der moderne in munich in spring 2011, centered on this idea of searching for the hidden and an endless quest for treasure. the pieces presented in this show have all been developed by students studying in the metal K.O.V. studio at AAAD, under the guidance of designer / architect eva eisler. designboom spoke with eisler about the project who stated that when working with the students, she wanted them to consider treasure, ‘not only as something tangible, but also the intangible… emotions, memories which are safe in our hearts. the treasures of humanity...’ 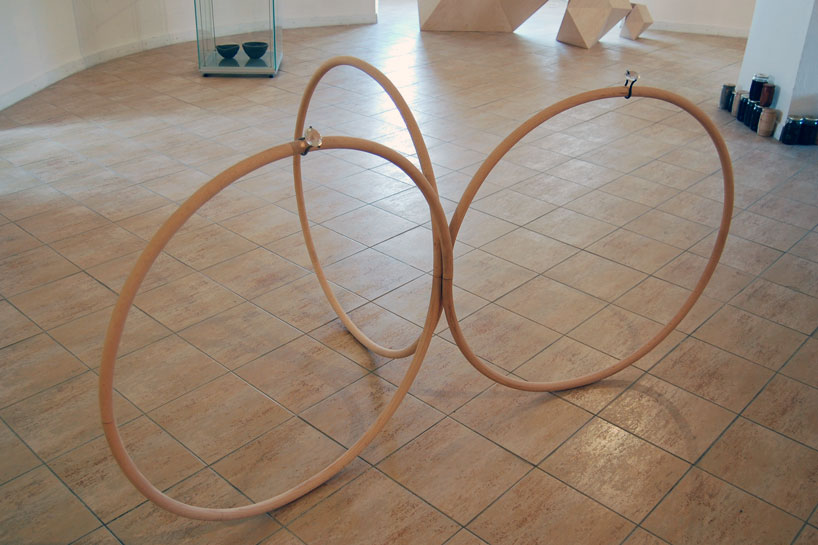 all of the pieces have been made from leftover wood which the students collected from a local workshop. 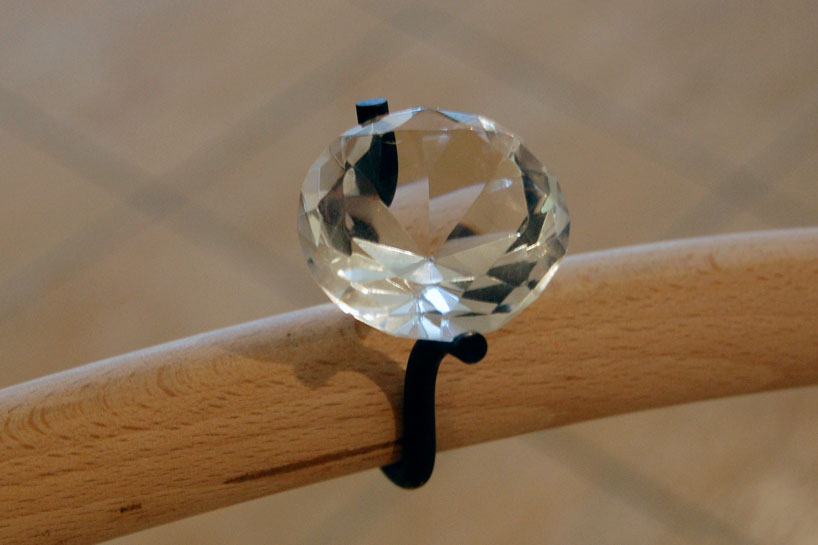 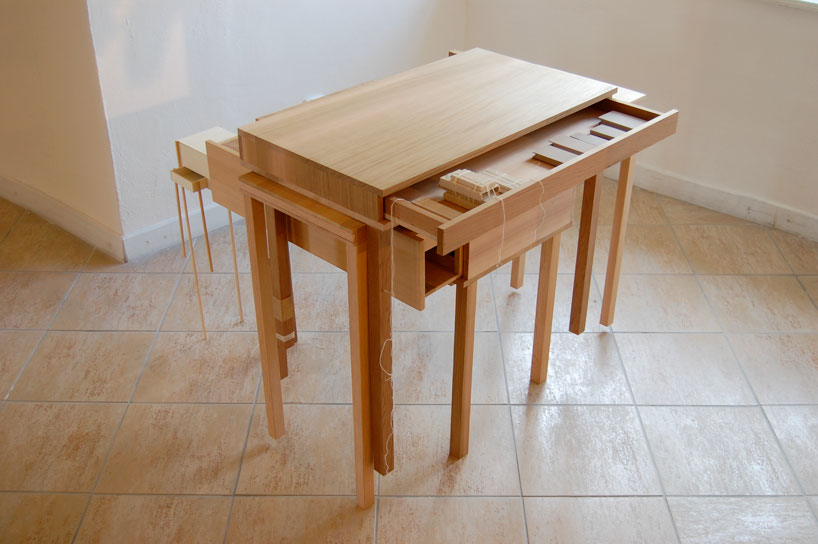 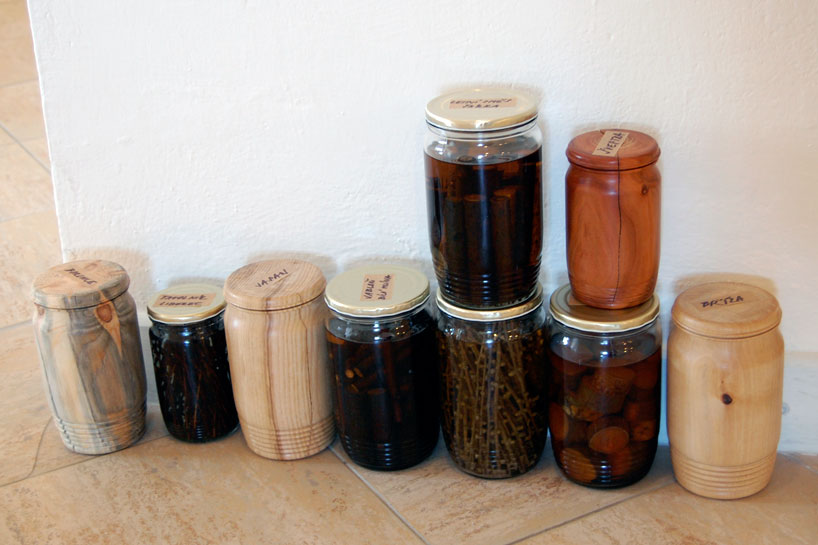 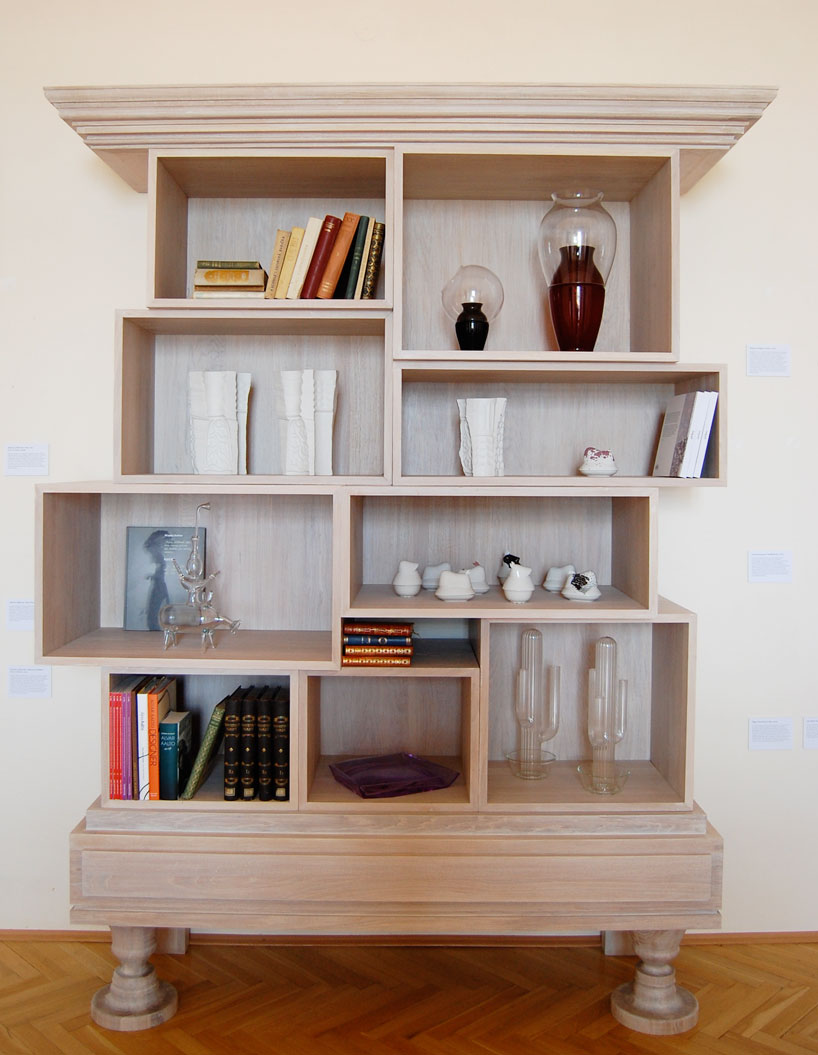 2007 marked the first year that křehký issued a limited edition of objects for the brand. in 2010, zielinski and macek founded the křehký gallery, to provide a space in which to showcase this special collection of international design. for the křehký mikulov festival, they present ‘křehký stories’ which for the very first time brings together the entire křehký limited collection in addition to new pieces which make their debut on this occasion including: ‘camoufleur’ by dutch designer richard hutten, ‘nudibranch’ by yveta kroupová and ‘panathenai’ by daniel pirsc. 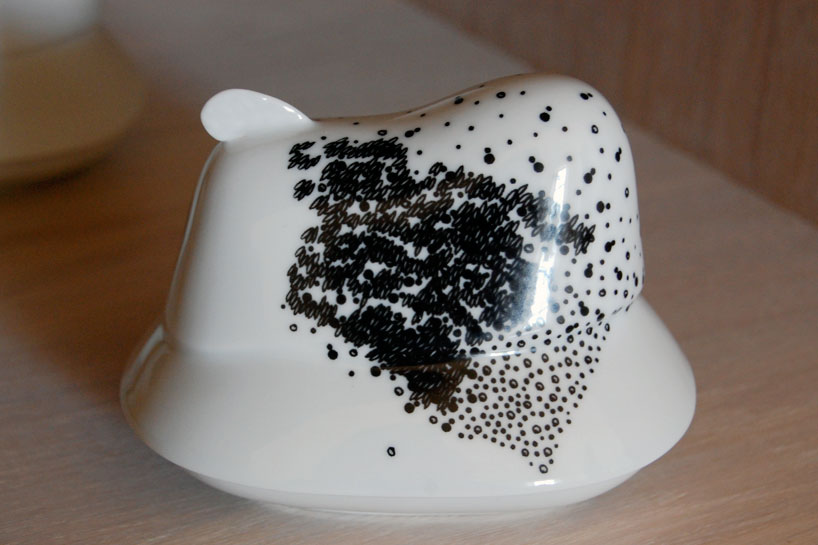 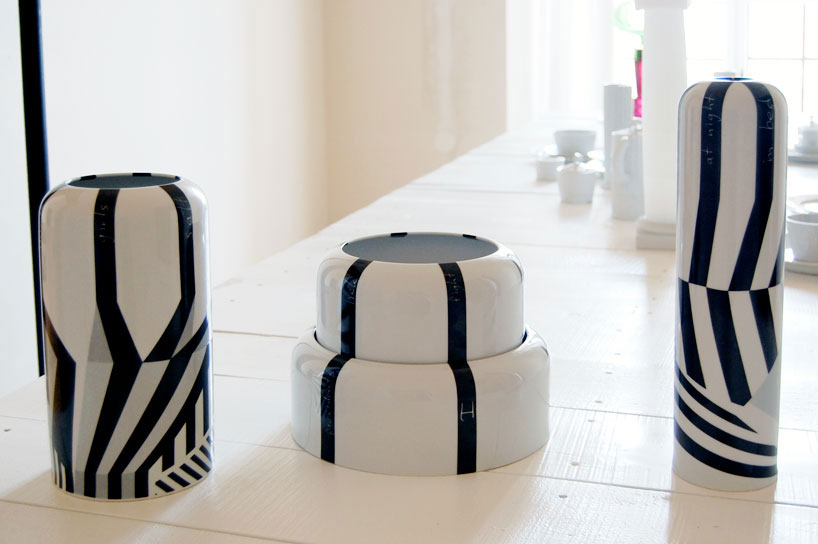 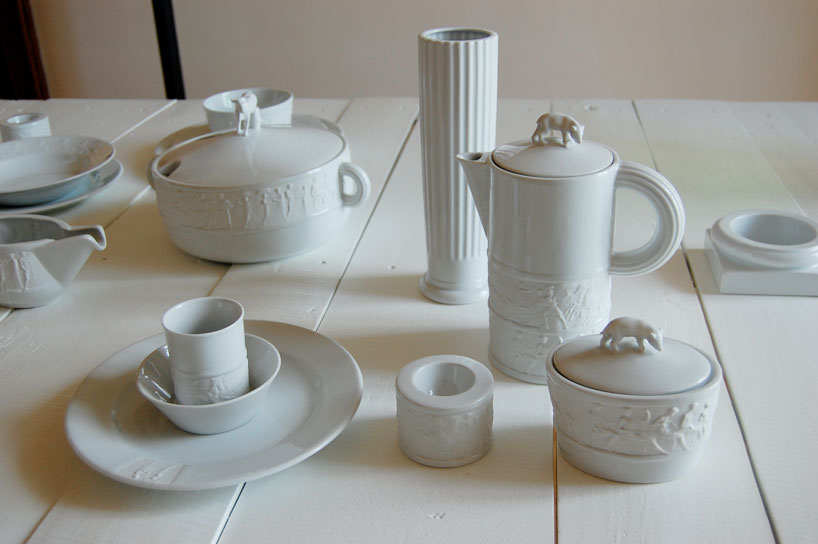 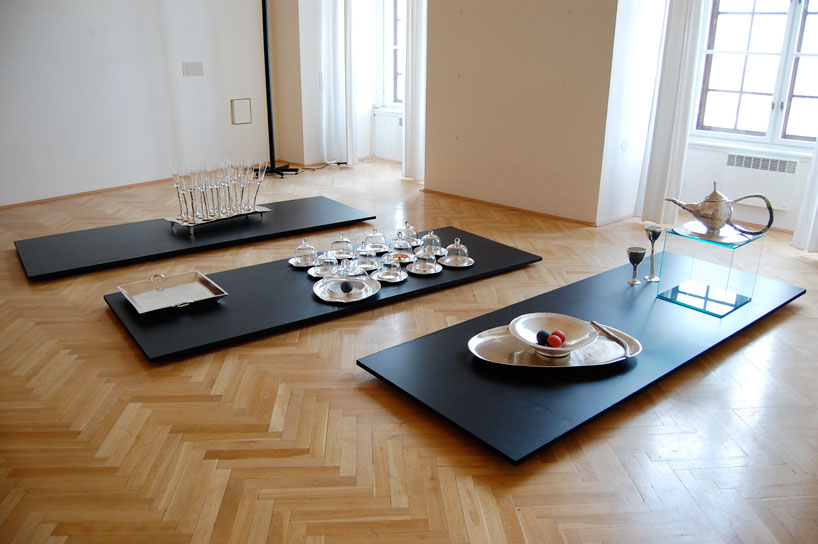 finally, a solo show of czech designer ivan jelínek’s glass, silver and gilding work presents his ventures into the unknown realms between design and art. producing a variety of vessels from bowls, carafes, cups, goblets, milk jugs and pots, his production includes custom-made sets, opening an alternative perception to the refined character of porcelain. 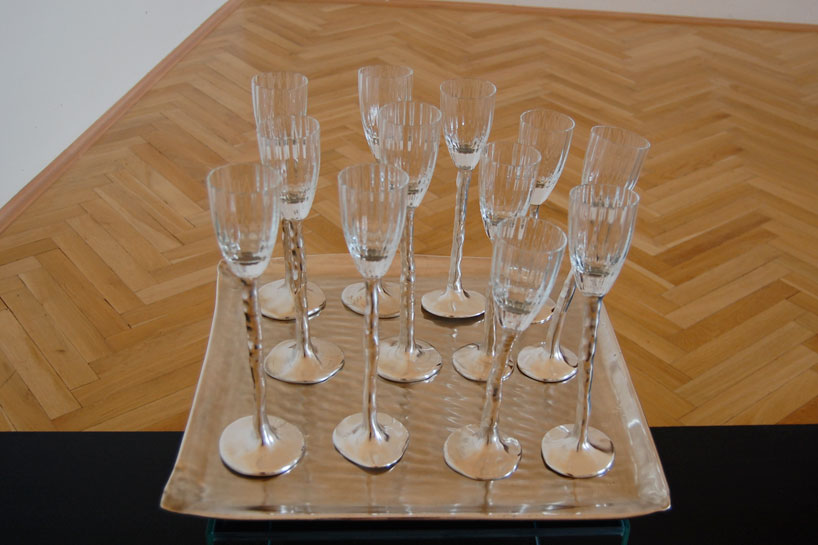 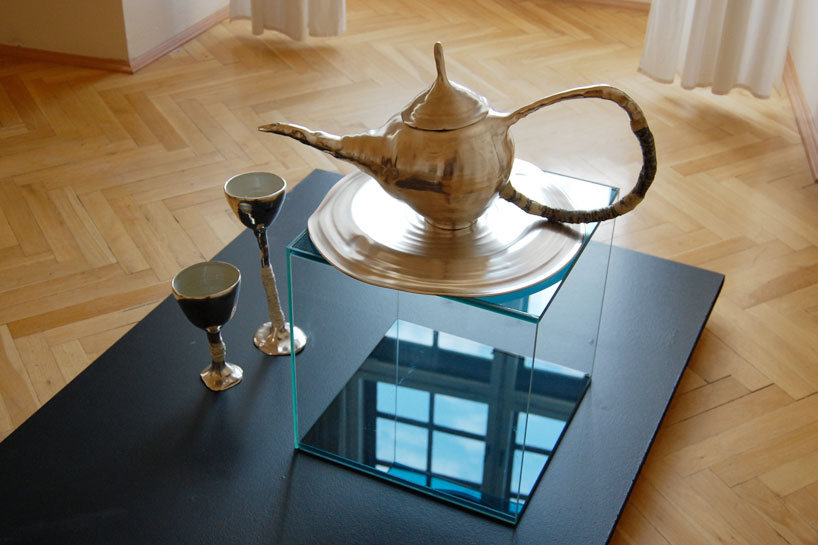 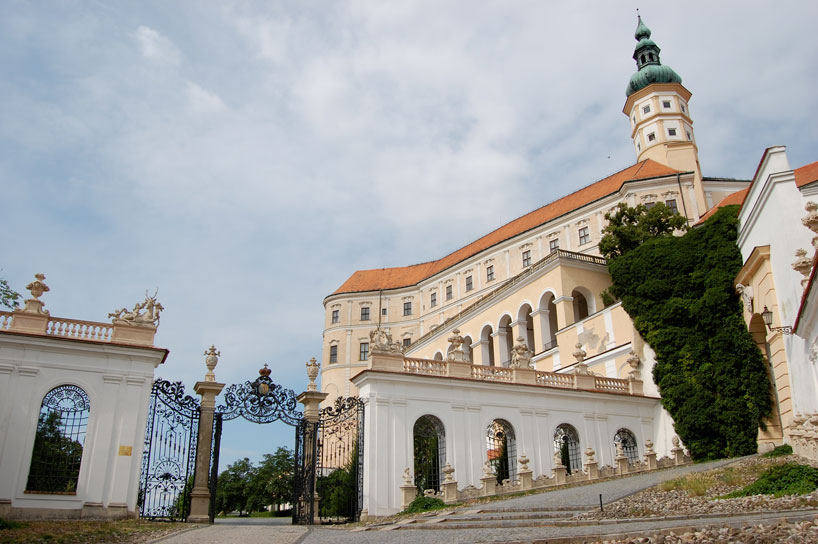 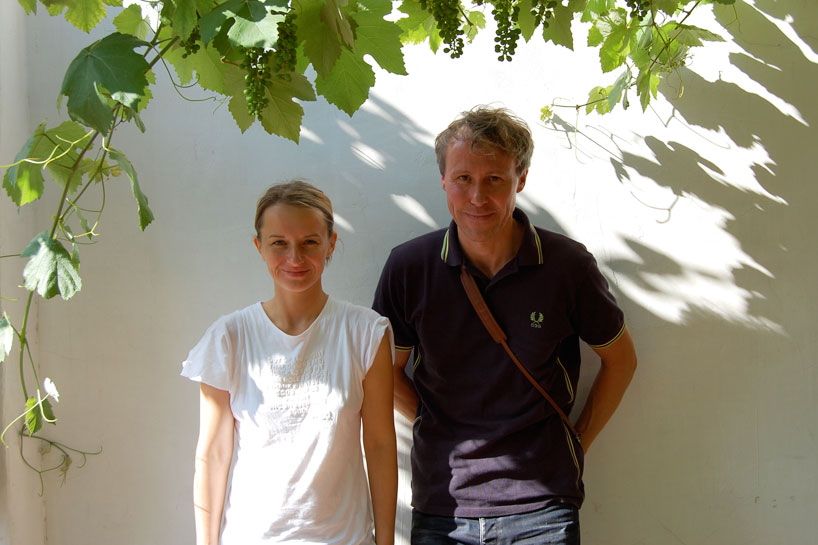