muirmcneil have designed the visual identity for the london college of communication’s 2015 summer shows, which exhibit the work of students graduating this month. the identity has been applied across print, signage and digital media and involved the creation of several new fonts. hamish muir and paul mcneil told designboom more about the project…

designboom: how did you come to work on the project?

muirmcneil: we were invited to pitch for the LCC summer shows 2015 identity last autumn and design development began in early january. since then, we have been working closely with the communications team at london college of communication (LCC) on final design development and implementation across print, signage and digital media. we both teach at LCC. our knowledge of both the college and the building has helped to inform our approach to the project.

animation used on screens at the LCC summer shows

DB: what’s the concept behind the system and what influenced the final design choices?

MM: the overarching aim for this year’s identity was to create a robust substrate against which all kinds of student work would stand out and which would also sit well with the architecture of the building. we decided early on to avoid the usual highly coloured ‘jumble sale’ style that is the familiar look for arts degree shows. instead we aimed for a solution that suggested both meticulous organisation and confident professionalism. it’s a design that is only obtrusive where it needs to be. our approach was based on a modular type and pattern system reinforced by a subtle monochrome palette using metallics. this responded to the architecture of the building and was adapted in various flavours to express information in three main categories – LCC itself, the school of media and the school of design, which both have separate degree shows running consecutively with a total of around 18 courses showing. 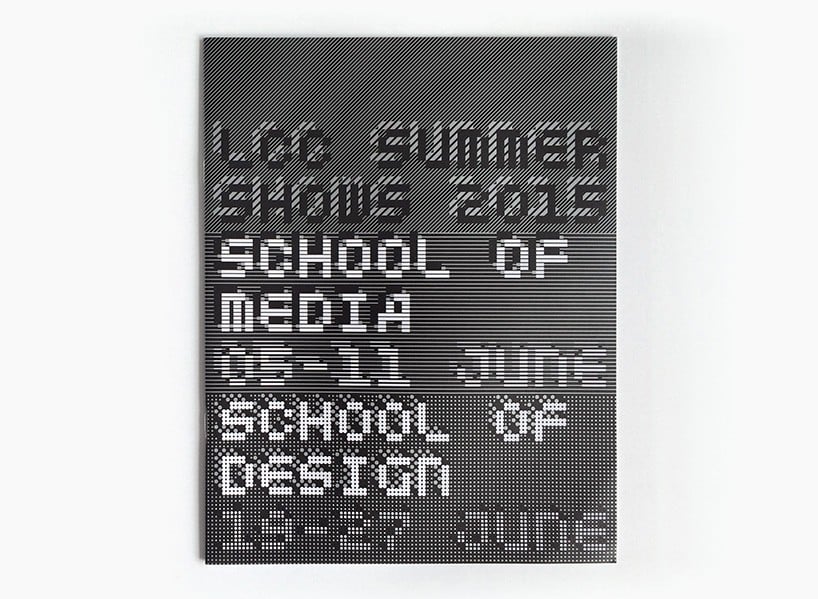 DB: please can you tell us about the fonts used and why you chose them?

MM: we generated an extensive range of custom typefaces for the shows identity based on an existing muirmcneil type system named twopoint. all of the typefaces map onto the same body which has been adapted to follow the proportions and spacing of the large windows that run along LCC’s main entrance hall. this modular framework is carried through all signage, print and screen based applications. information hierarchy is expressed through scale, density and texture. the overall show identity uses diagonal stripes within the body of the letters and the school of media and school of design are represented appropriately by horizontal lines and round dots respectively. the typefaces used for media and design are rendered in a series of stroke and dot weights. textures are created by layering weights of type in fixed offsets which are common to the construction grid of each typeface system. 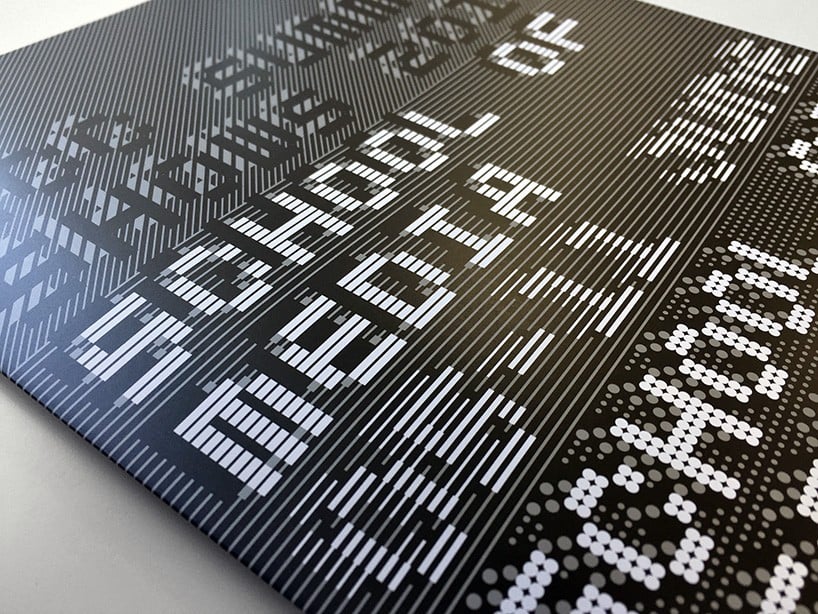 details of the show guide cover… 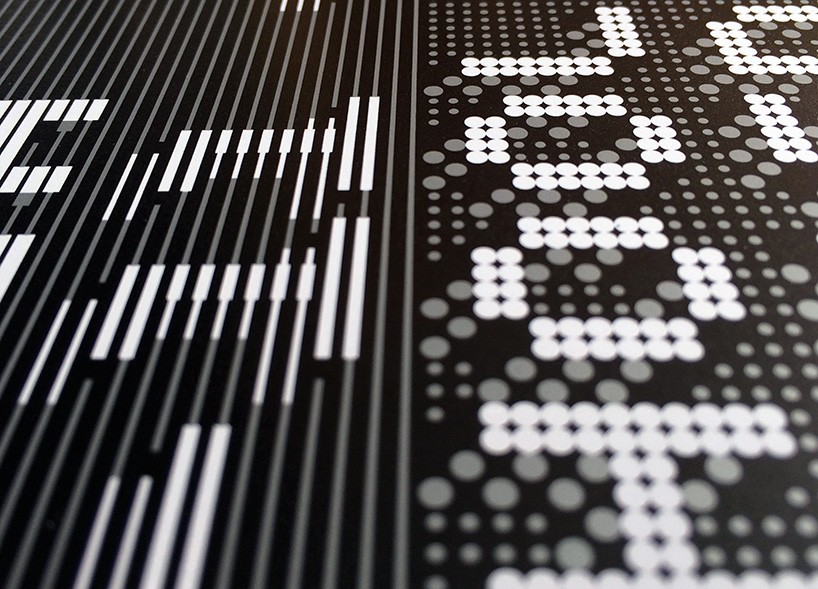 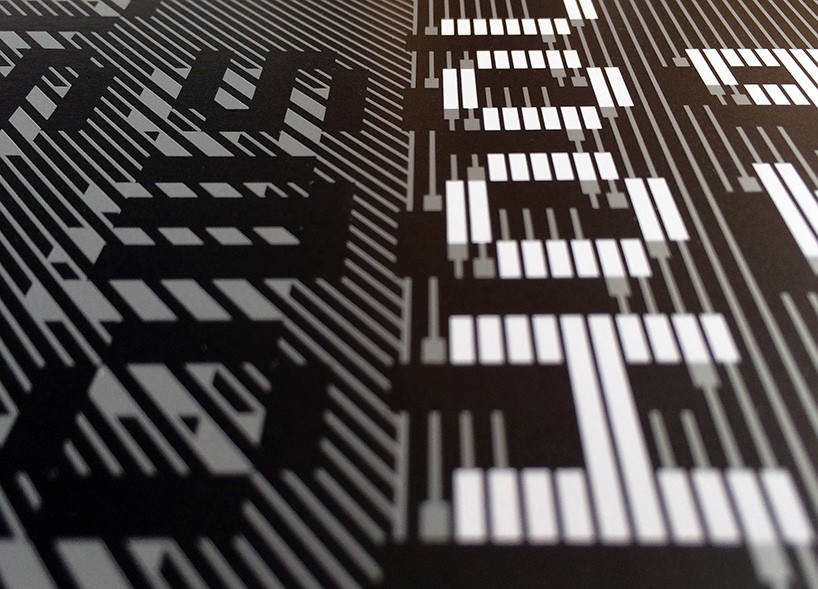 DB: what were the biggest challenges involved realising the project?

MM: the biggest challenge was to implement the visual identity for each of the three areas across various media and materials, in particular the adaption of the print design for use on the external signage. the printed items are in metallic black and silver; for the long ‘café’ windows we chose matt silver vinyl and for the windows of the entrance hall we used mirrored vinyl. the metallic theme is continued in the interior signage which is a modular, reusable system using an aluminium faced composite board cut to a series of modular widths. 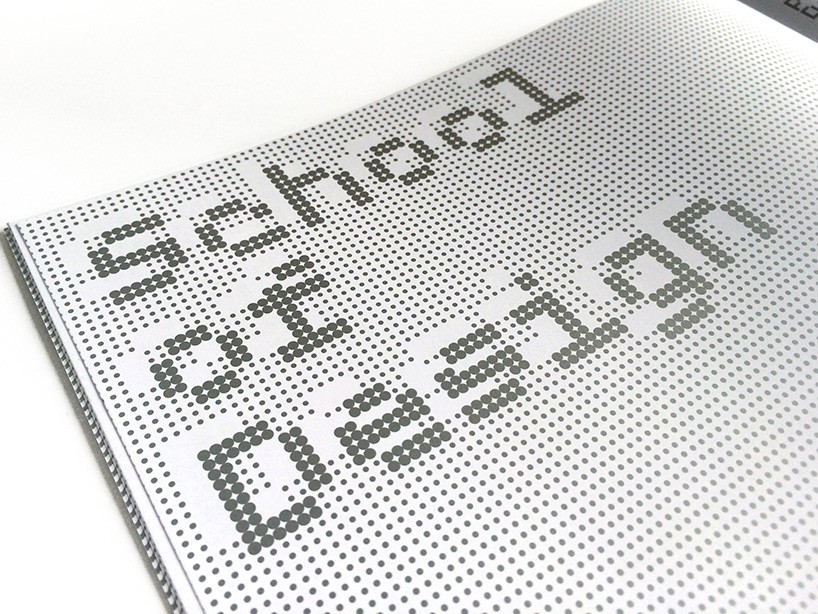 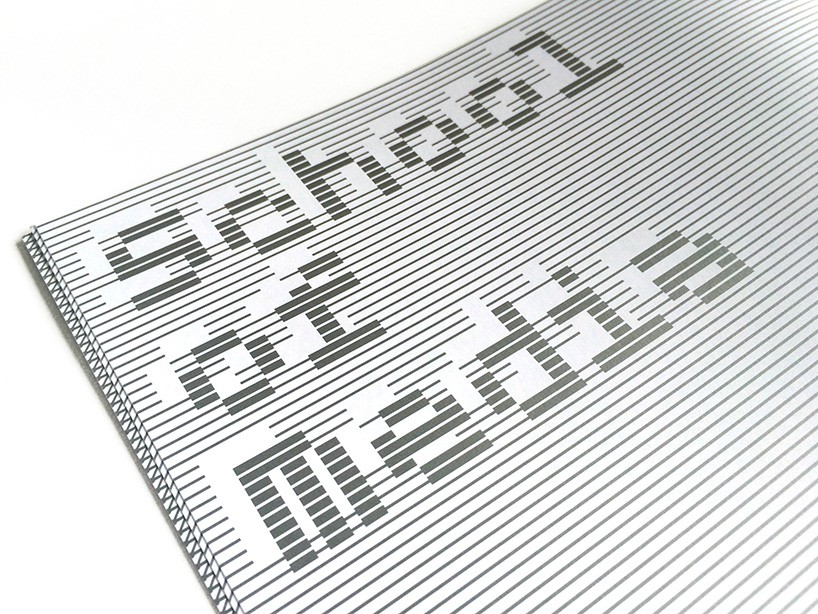 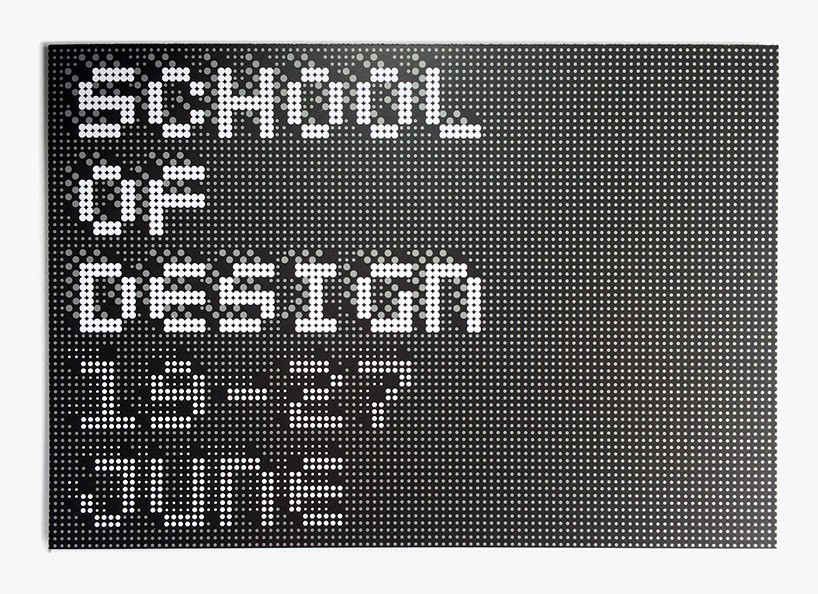 DB: what aspects of the design are you most satisfied with and why?

MM: the printed invitation, the corresponding guide and the mirrored lettering on the windows of the main entrance; the former for the visual depth achieved through the use of layering and metallic inks; the latter because we’re relieved it worked. we had a hunch mirrored lettering would be effective but we couldn’t predict exactly how it would behave in situ. we’re pleased that the changing light and reflections interact with the architecture and the environment mirroring (!) the apparent depth of the printed pieces. another aspect of the design which works well is the way the exterior graphics do not obstruct the light in the interior spaces. the openness of the letterforms and their textures integrates neatly with the fabric of the building, providing both interesting shadows internally and patterned overlays externally on window views of the surrounding environment. 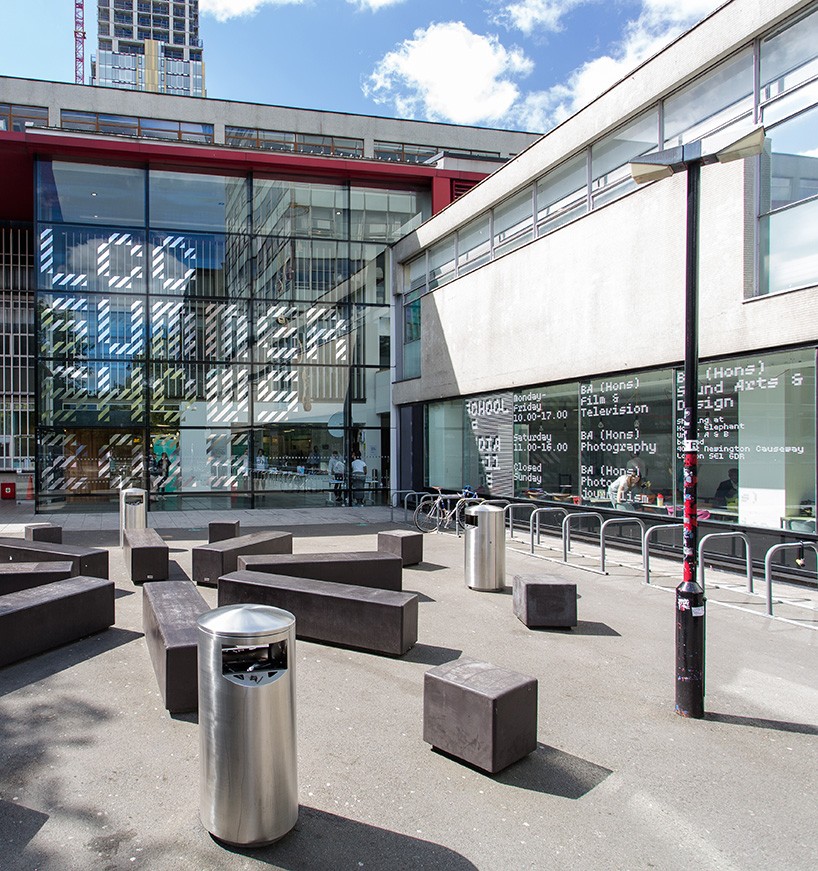 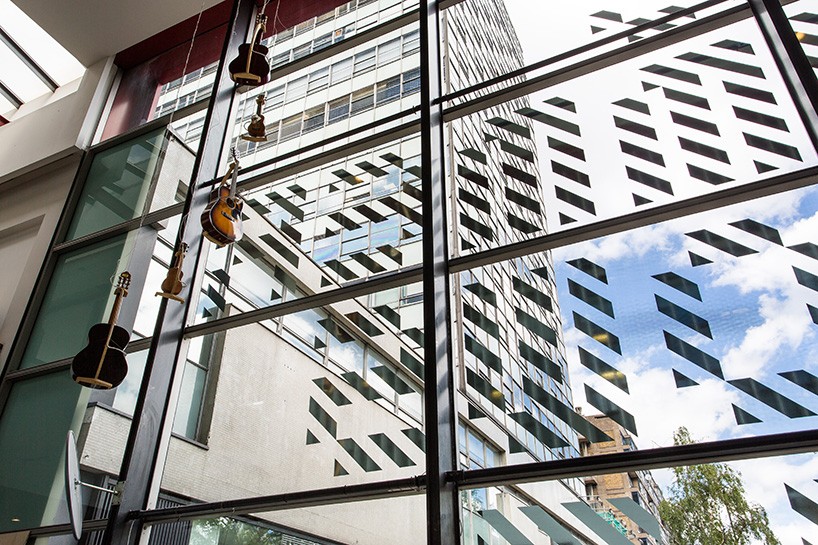 detail of the mirrored silver vinyl
photo by lewis bush

continuation of the window graphics
photo by lewis bush 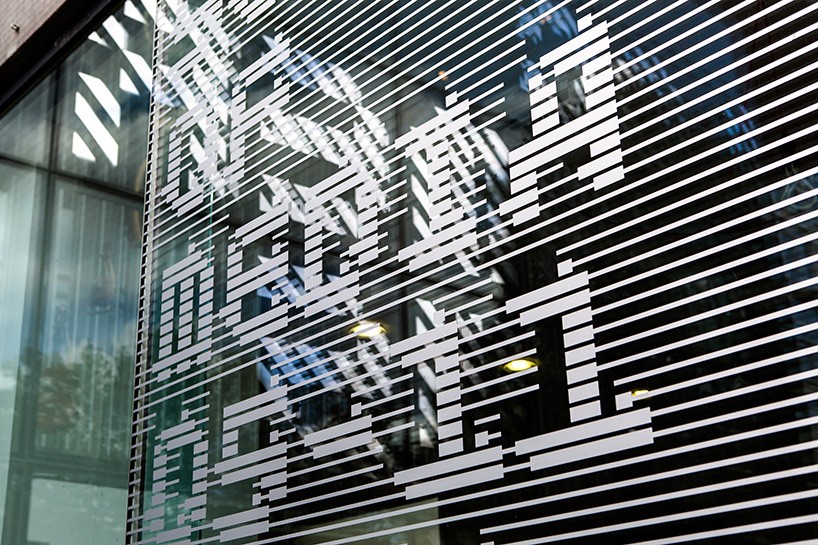 detail of the matt silver vinyl
photo by lewis bush 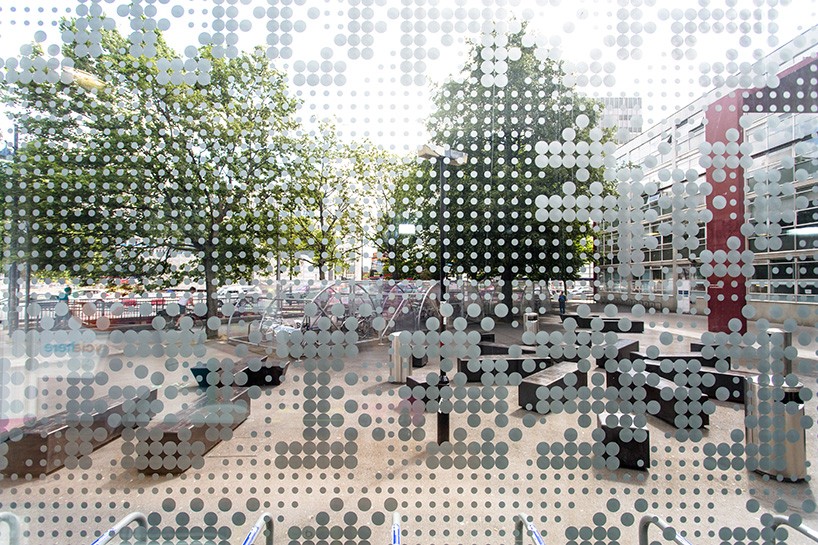 window graphics viewed from inside
photo by lewis bush 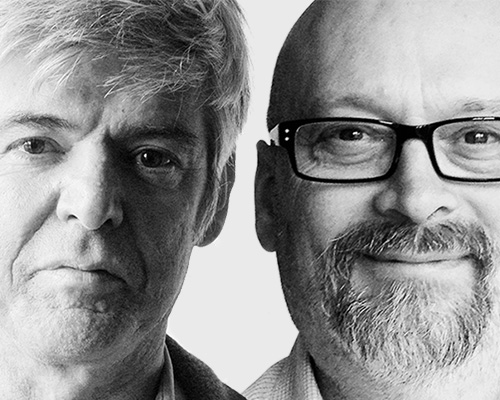 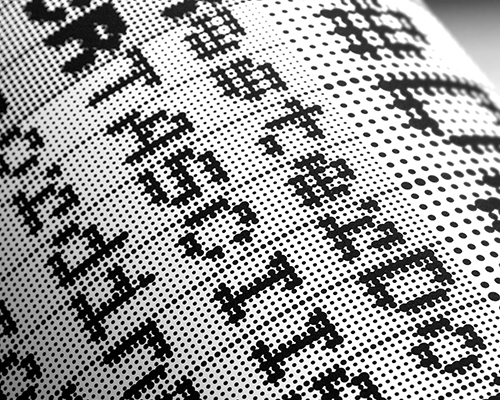