to celebrate the arrival of the ford mustang in france, the american automotvie company and communications agency l’écurie selected five multidisciplinary french creatives to bring their artistic vision to the all american roadster. mathieu césar, l’encrerie, alexandre vauthier, noé duchaufour lawrance and thomas lélu each instilled their unique perspectives onto a ford mustang, transforming the vehicle it into a drivable work of art. 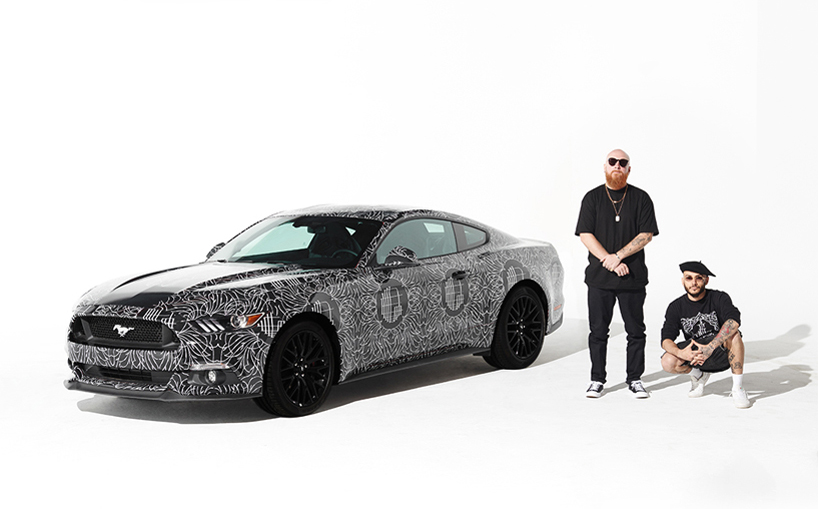 tattoo artists leo gavaggio and jeremy taltaud of studio l’encrerie on their artistic design for ford mustang:
‘when tattooing our subjects, one of our primary motivations is to convey a message of codes, while appropriating surfaces and shapes. with the ford mustang, we wanted to spontaneously evoke the idea of freedom – like having the right to draw on something you will admire forever, but had no right to touch in the first place. our design for the car’s body is derived from the excessive growth of the virginia creeper, extending over the entirety of the vehicle.’ 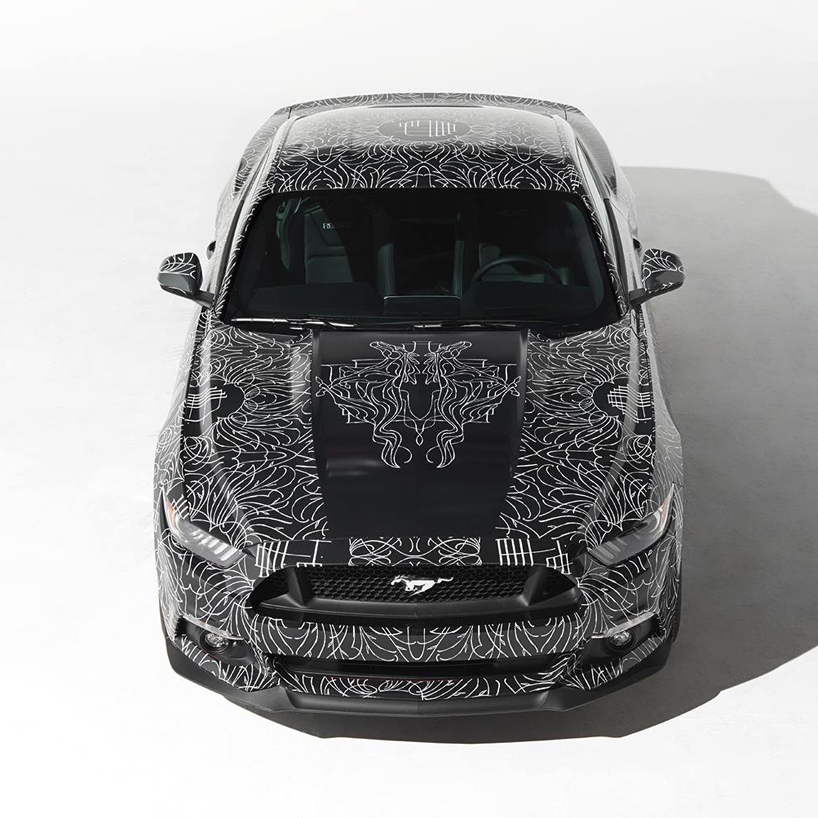 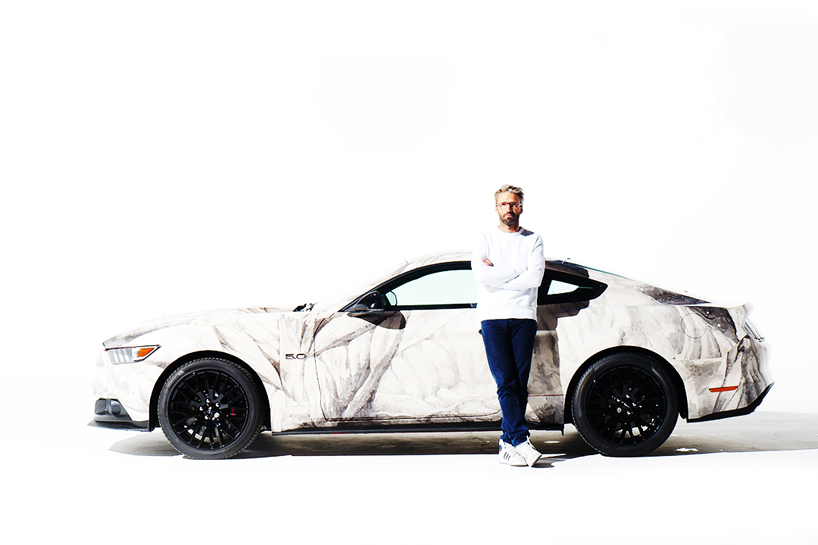 noé duchaufour-lawrance with his ford mustang

designer noé duchaufour-lawrance on his artistic design for ford mustang:
‘borrowing from anatomical and veterinarian medicine of the 18th century, I magnify the mechanical and animal power of the mustang, lifting the skin of this ‘muscle car’, and bringing the horses out from under the hood – an equine vision of this spirited car that also makes reference to the brand’s name.’ 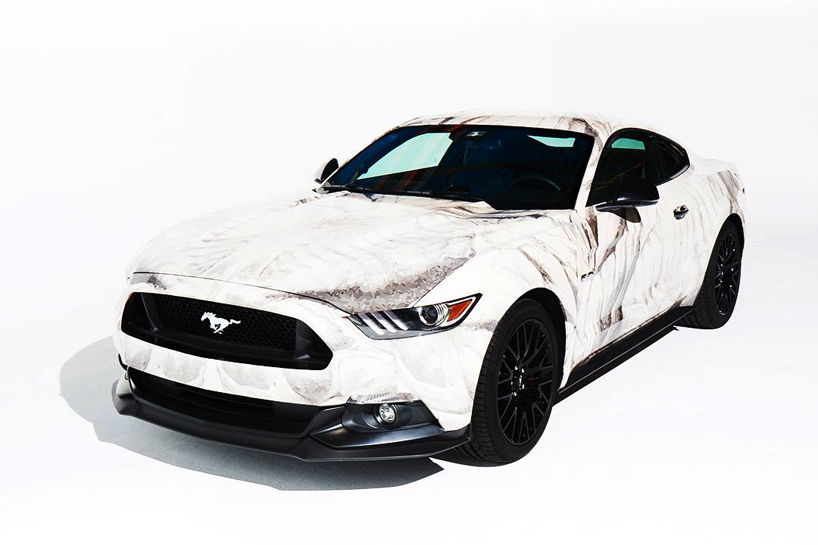 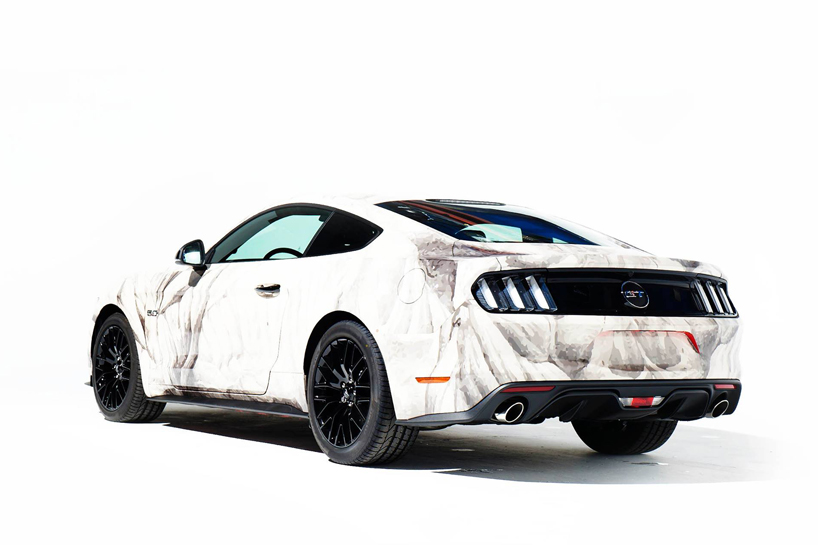 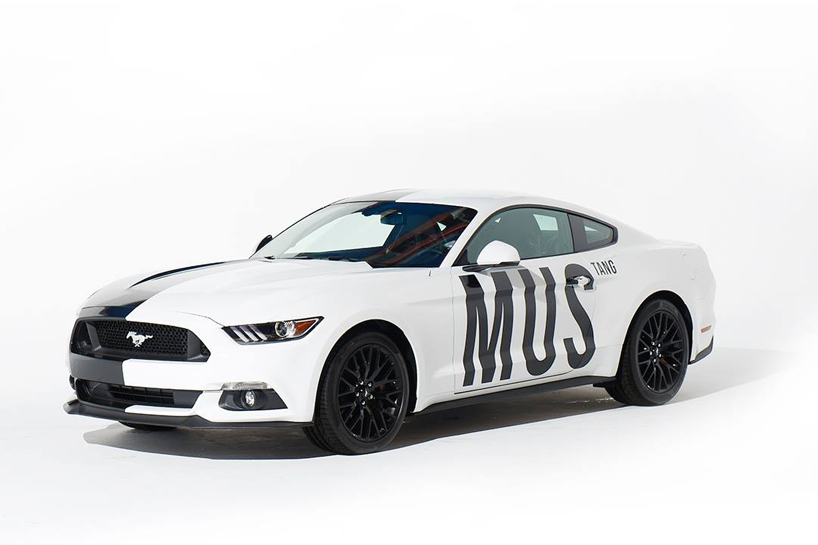 photographer mathieu césar on his artistic design for ford mustang:
‘through two non-colors – black and white – I wanted to recreate a fantasy, that of a road trip, and express a contrast between power and imagination; which for me, encompass the ford mustang. I have translated the lyrics of serge gainsbourg’s song ‘ford mustang’ onto the car: ‘on s’fait des langues, en ford mustang, et bang, on embrasse, les platanes, MUS à gauche, TANG à droite, et à gauche, à droite’ – placing MUS on the left profile, and TANG on the right.’ 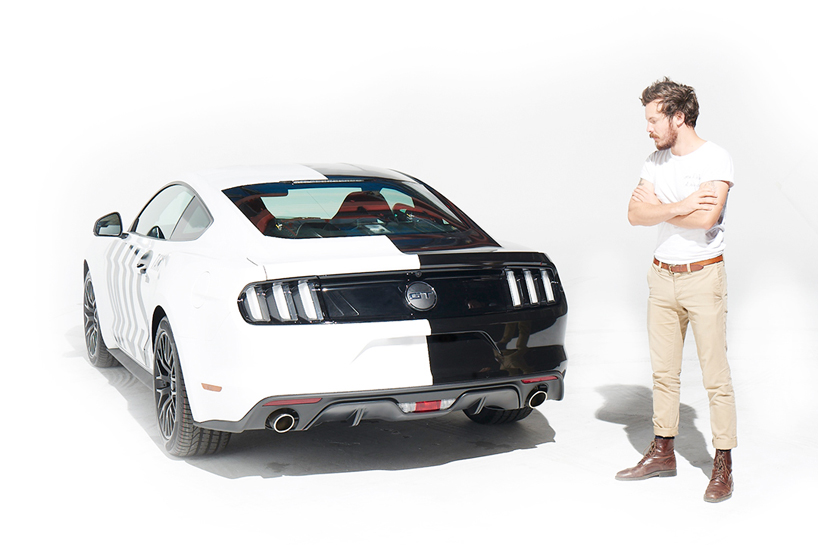 mathieu césar’s with his ford mustang 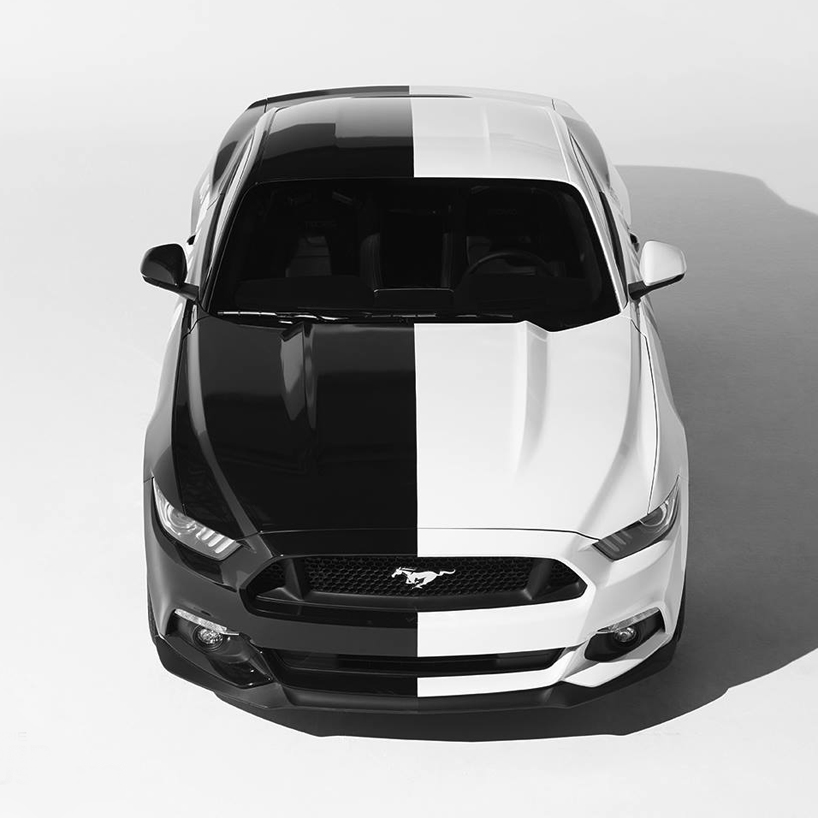 mathieu césar’s ford mustang is defined by black and white 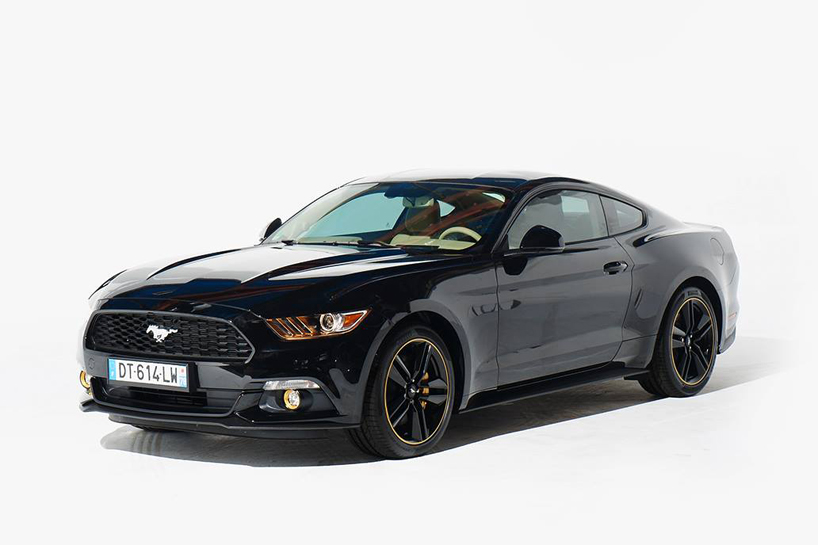 stylist alexandre vauthier on his artistic design for ford mustang:
‘I have marked the car with my identity and codes of the house. I want to create a balance between speed, line, design and noble materials. completely dismantled, the car will receive new colors and materials that evoke those used today in the world of fashion.’ 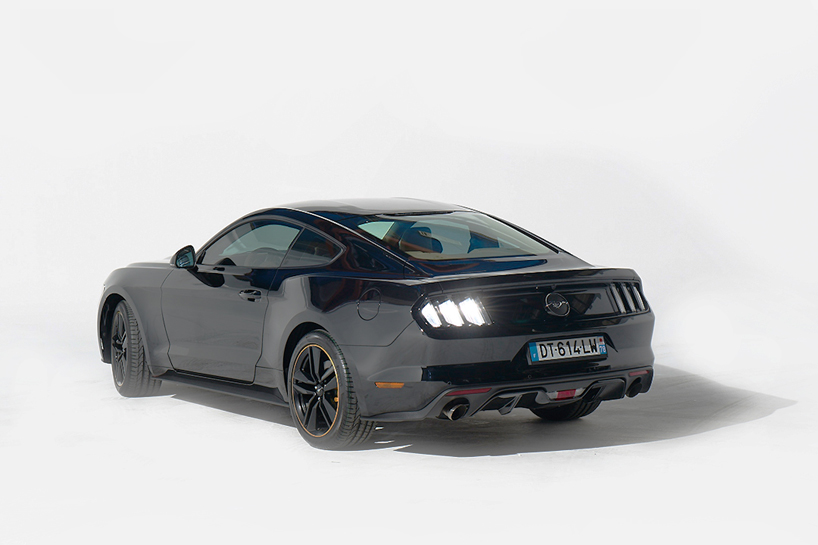 subtle details seen in the world of fashion have been employed in vauthier’s design, such as copper gold trimming 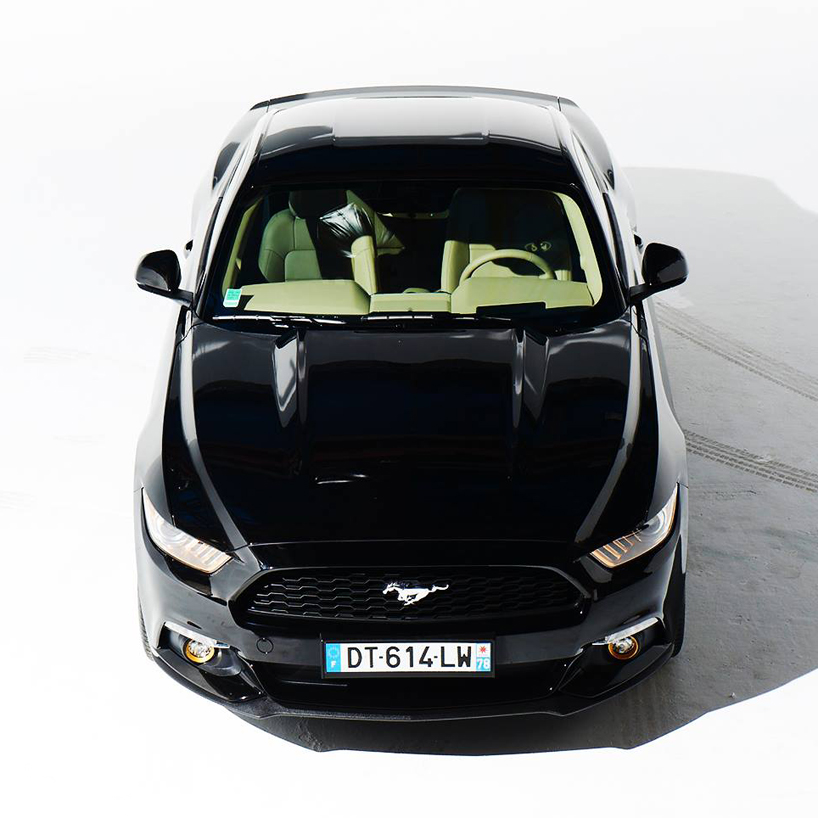 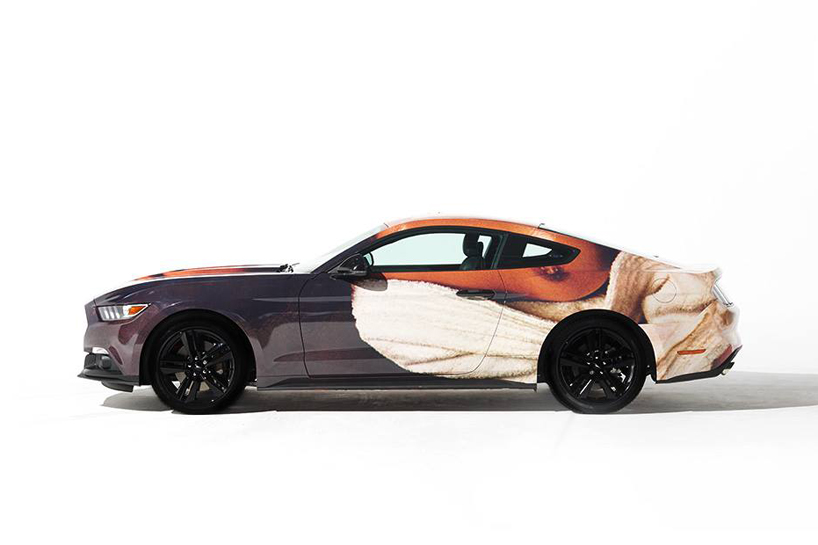 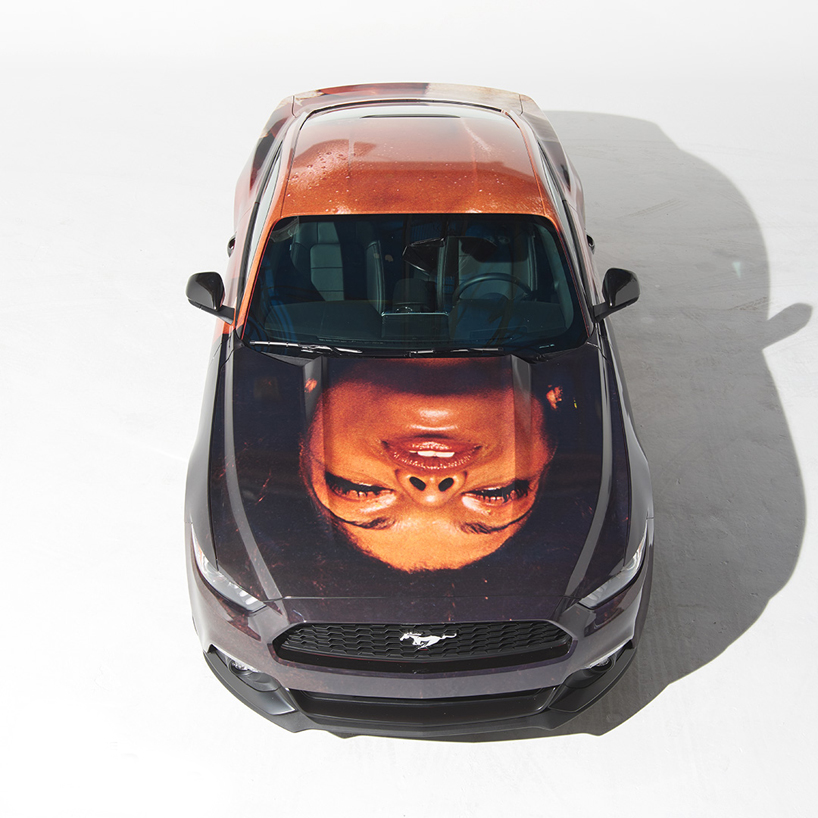 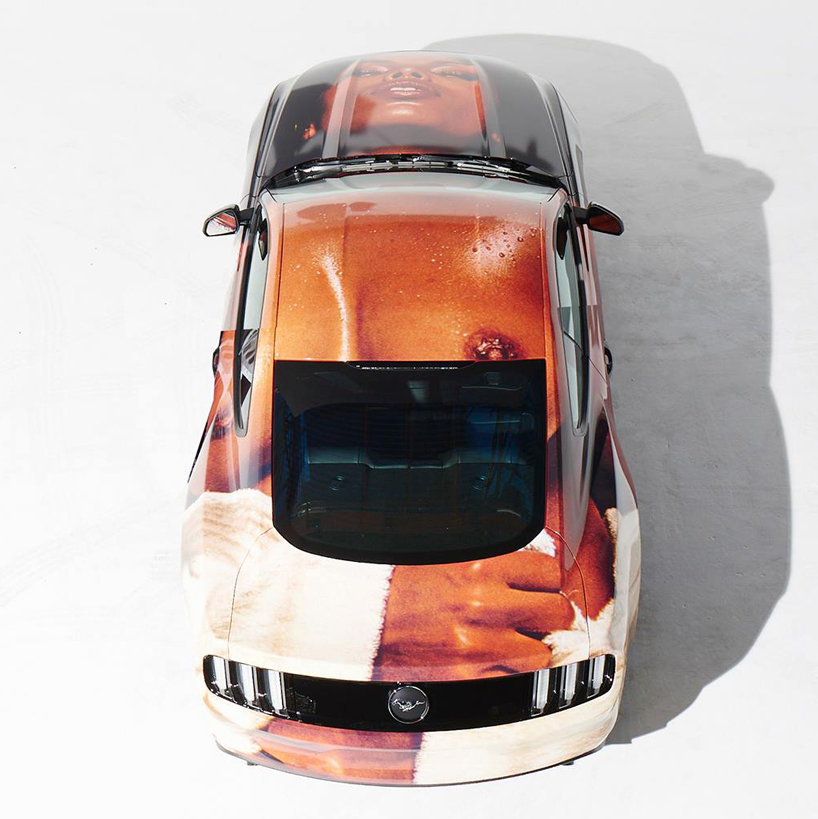 to launch this special occasion of the ford mustang in france, designboom co-hosted a competition with l’écurie inviting the public to capture their own interpretations of the lifestyle and spirit that the ford mustang encompasses, bringing their own graphic motif to the vehicle. we received many concepts via instagram (#LECURIEFORDMUSTANG), and the jury selected the ‘dazzle camo’ by morgan grosset for its modernity and technical expression, while still maintaining the image of ford through the design. his artistic motif was brought to life and revealed at a special event in paris in september, alongside the realization of the other five creative interpretations of the ford mustang. thanks to everyone who participated! 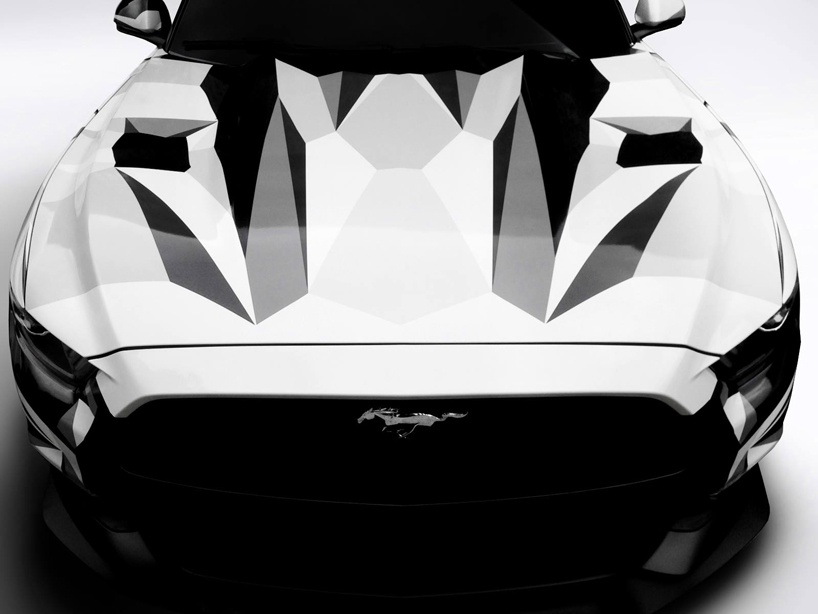 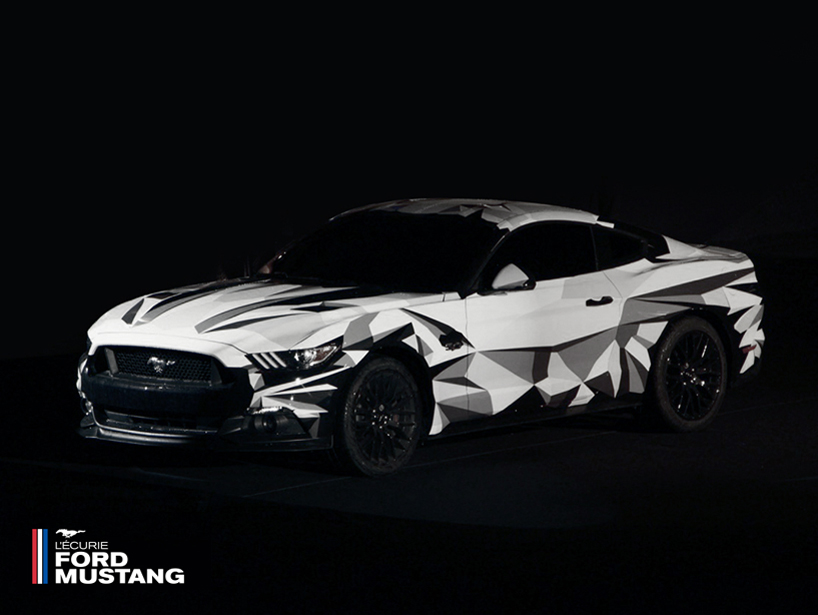 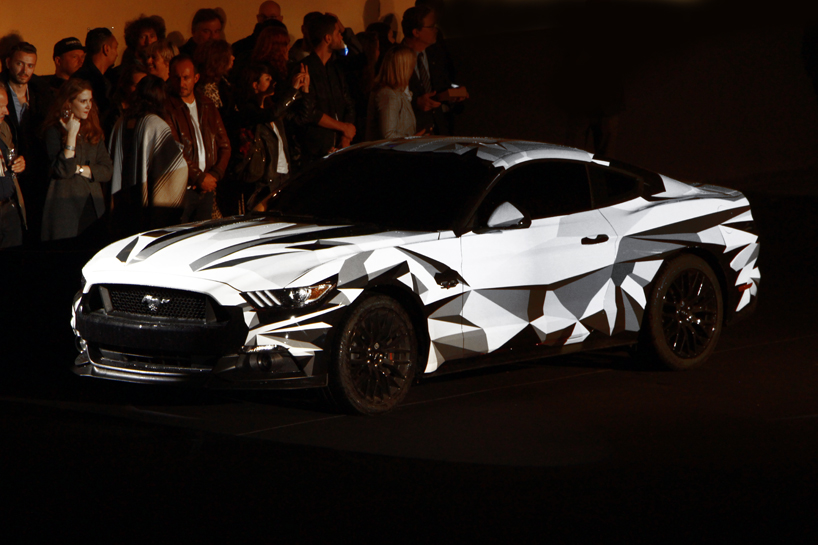 the ‘dazzle camo’ being revealed at a special event in paris