Hermès: from objects to spacesimage © designboom

Hermès’ vision of the home is first and foremost a state of mind. in one creative sweep, Hermès combines restrained elegance, noble materials and exceptional expertise with boldness, imagination and freedom. in 2011, this philosophy was embodied by a finely crafted range of furniture, furnishing fabrics and wallpapers. the following year, architect shigeru ban’s ‘module H’ modular system of architectural elements (which designboom covered here) made subtle reference to former Hermès designs from the 1920s and 1930s, particularly those created in collaboration with interior designer jean-michel frank.

today, Hermès unveils a new collection of cleverly designed furniture, fabrics and wallpapers that tell a story, bespoke pieces showcasing skill and surprise in equal measure. a contemporary vision of the Hermès lifestyle by philippe nigro. 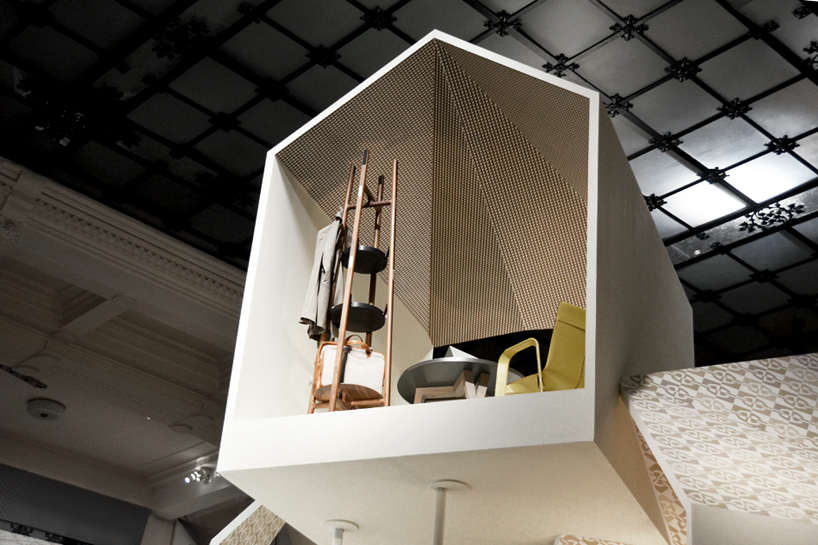 ‘les nécessaires d’Hermès’ is a collection of eight valet stands, tidies and occasional seating by the french designer which takes its namefrom the french word ‘nécessaires’, meaning ‘essential’ pieces. each piece which composes the set of furniture performs several functions–the ‘essential necessities’ which can be used for sitting down and relaxing, for storage or for concealing incongruous objects. manufactured according to the high-quality traditions of cabinetmaking and upholstering, nigro’s designs combine craftsmanship and exquisite materials, such as canaletto walnut wood in warm shades, brushed steel, leather and Hermès fabrics.

presented during milan design week 2013 at the circolo filologico, the collection debuted in a scenic installation dedicated to the world of the house,alongside Hermès’ re-editions. seven structures taking the symbolic shape of a home–all elevated above the ground on pilotis–were each staged with an arrangement of nigro’s furniture designs for the french luxury brand, and how they could be visualized ina real domestic interior setting. 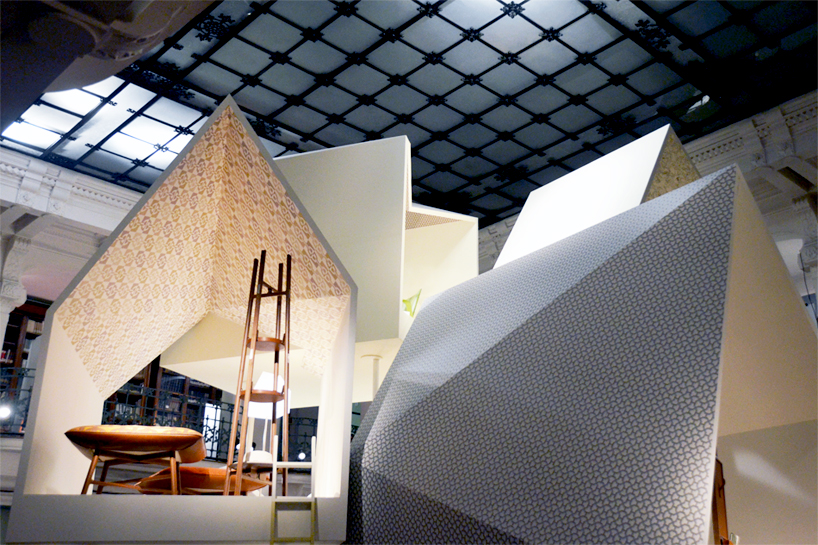 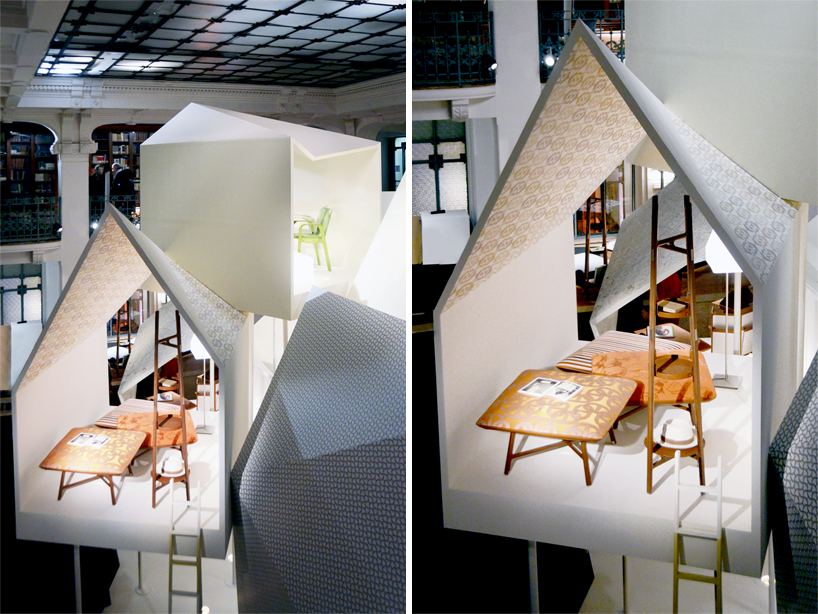 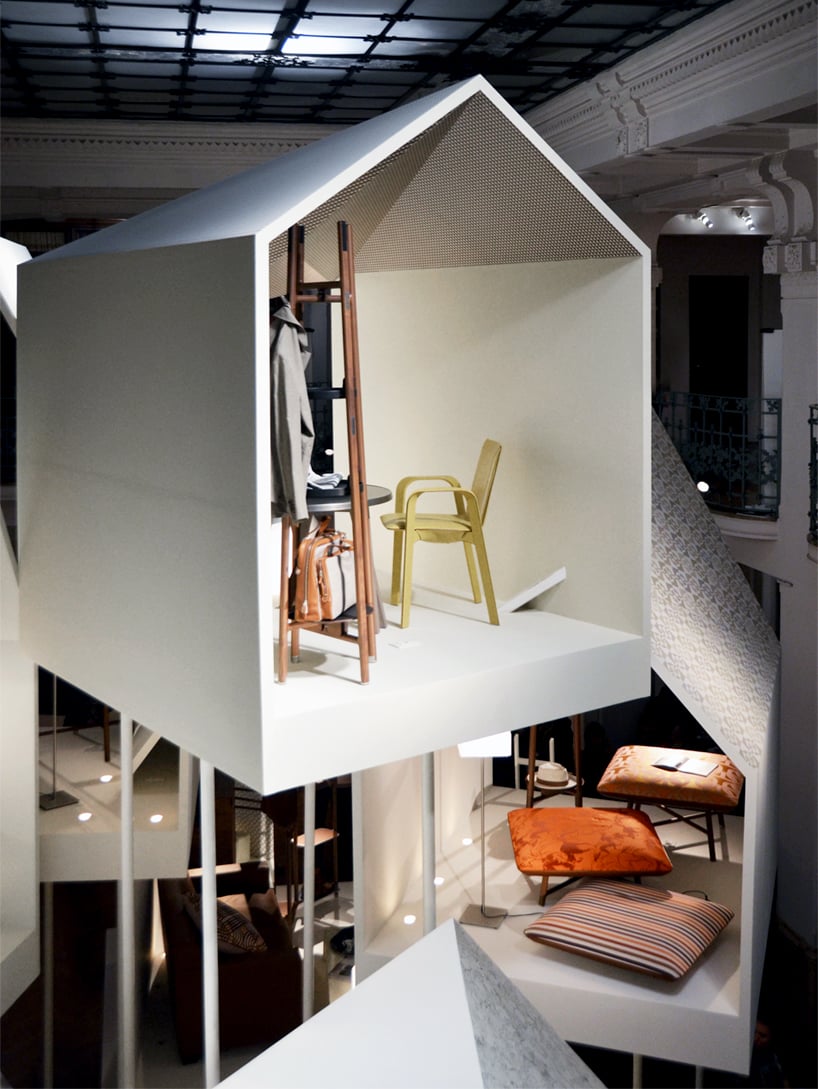 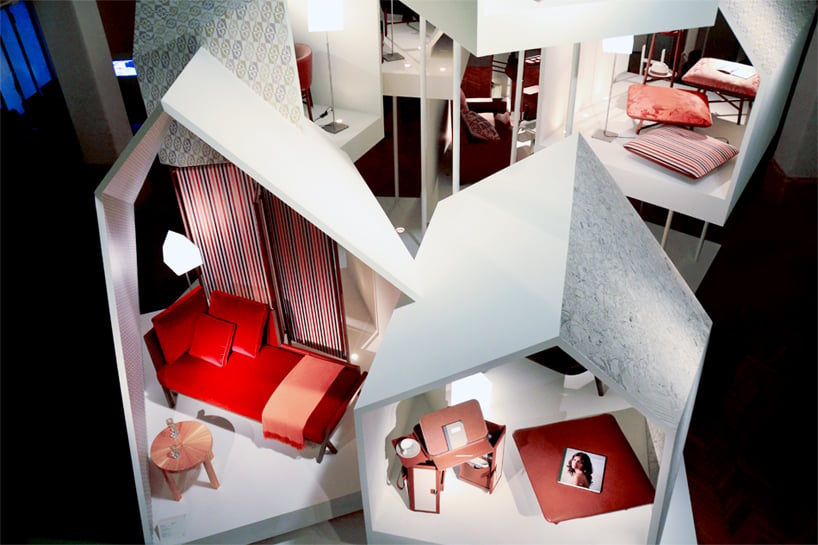 bird’s-eye view of the installationimage © designboom 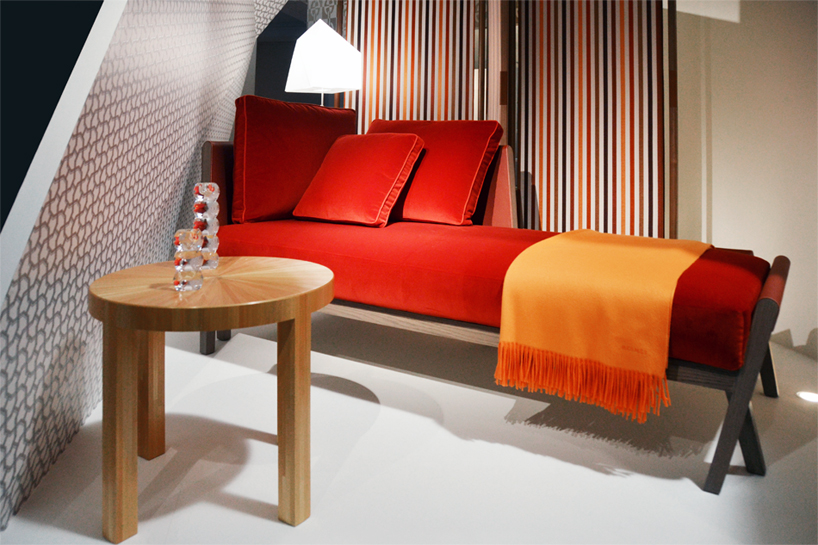 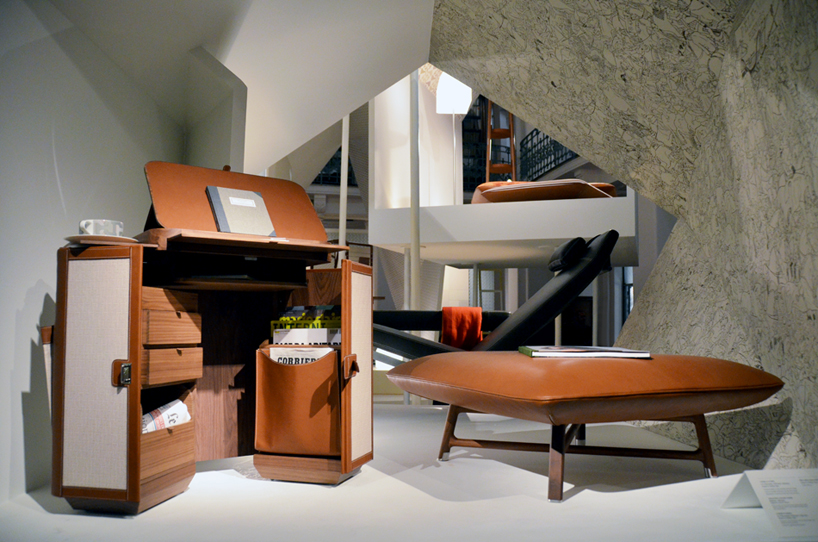 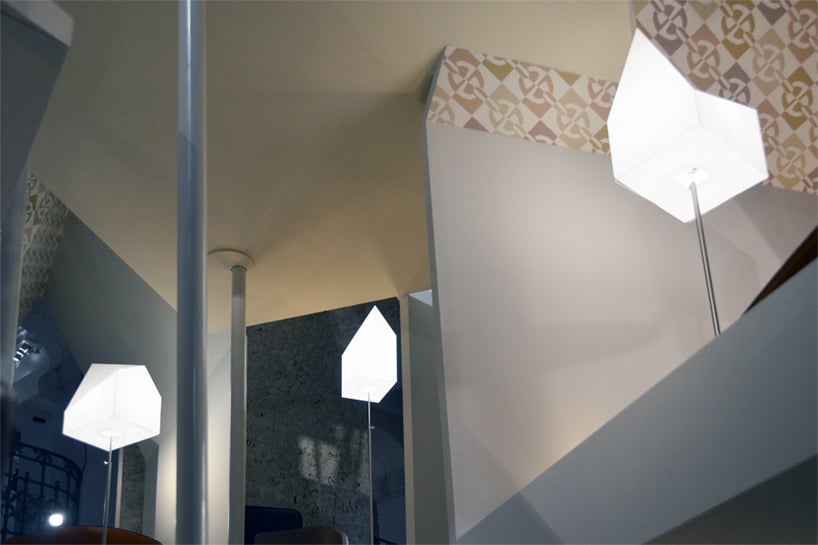 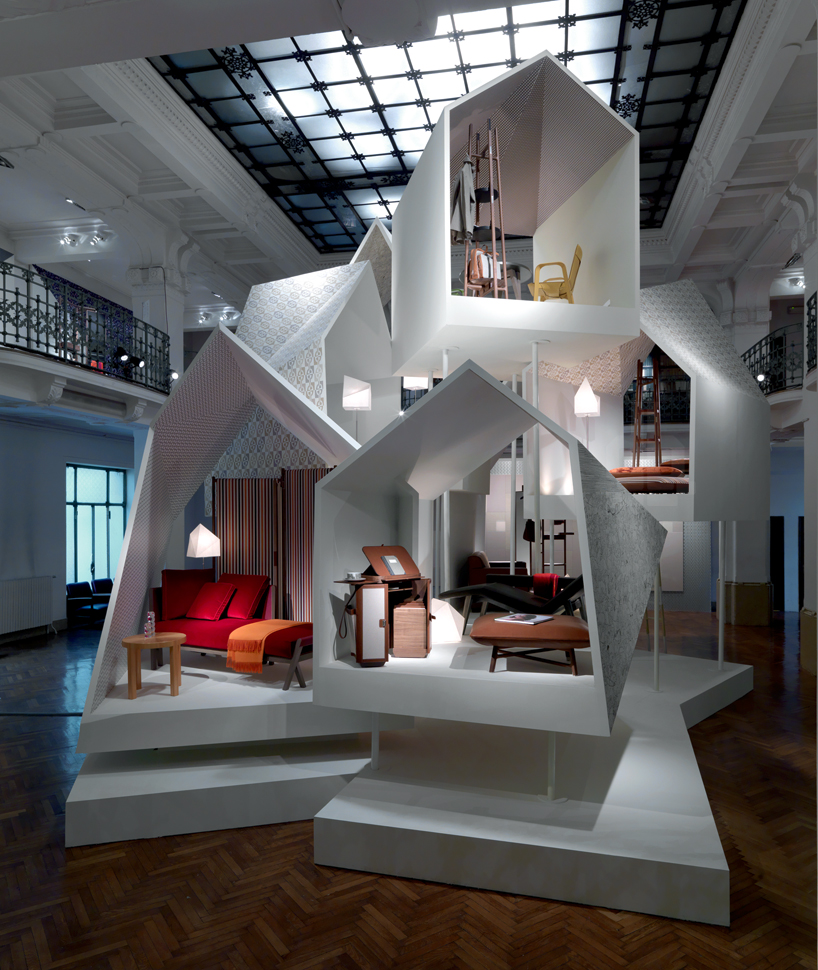 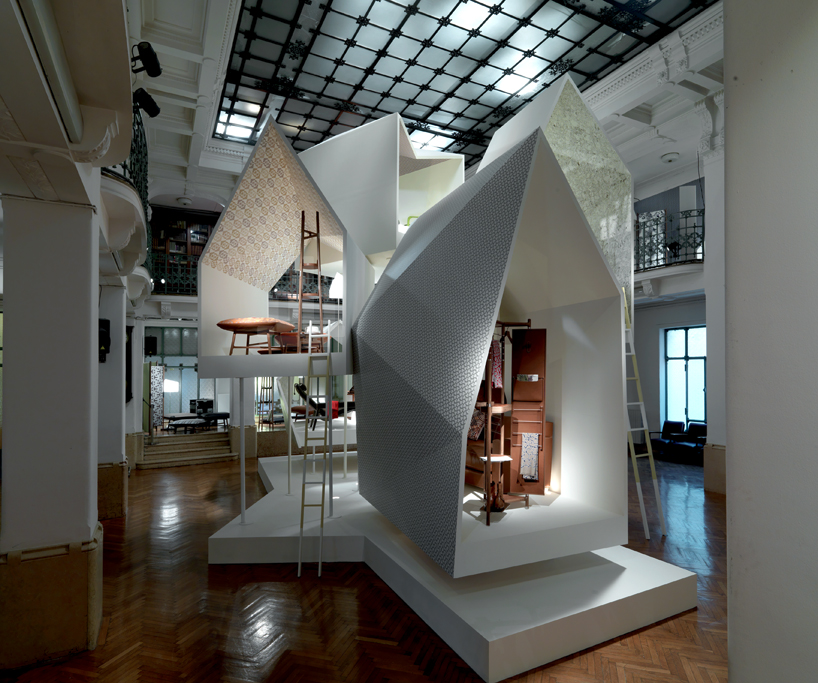 back viewphoto by philippe lacombe 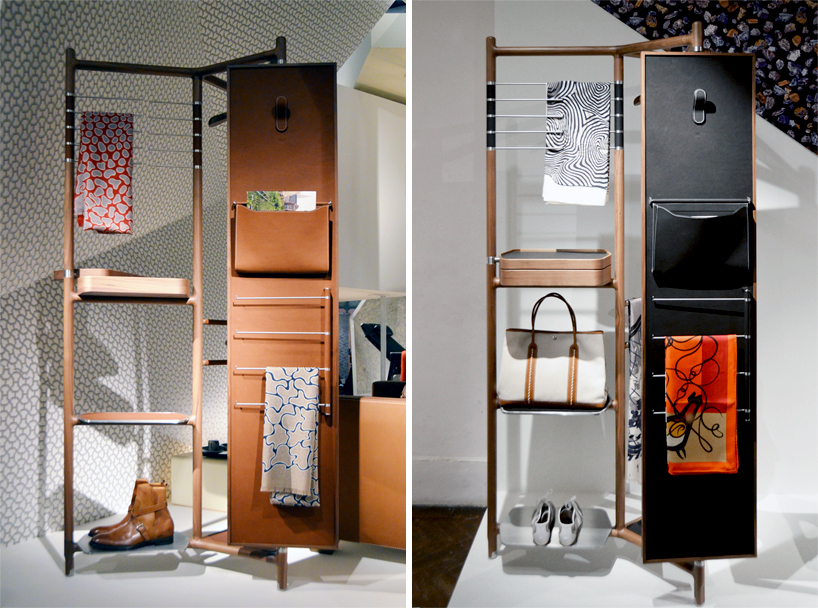 carre d'assise are convenient, low stools that can double as small tables
photo by philippe lacombe

detail view of the groom
photo by philippe lacombe

a selection of fabrics and wallpaper, including the atlantic blue vent portant and azure voiliers wallpaper
photo by philippe lacombe

fabrics include the flame-colored carré cube, the dulse-colored swirled graphic of spirographie and the limstone print of les minéreaux
photo by philippe lacombe 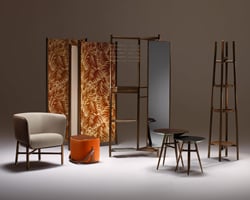 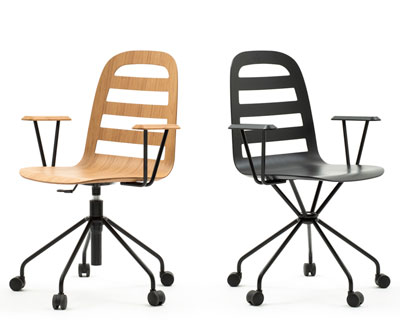 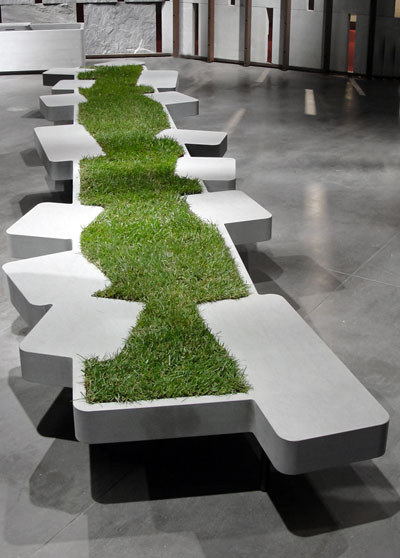