the work of a team of about 30 specialists in engineering, industrial design, and optimization, M55‘s ‘beast‘ electric bike is a luxury hybrid electric bike, designed for intensive off-road use.

the vehicle can obtain speeds of up to 40mph, and a single charge provides over 90 miles of power in normal use. 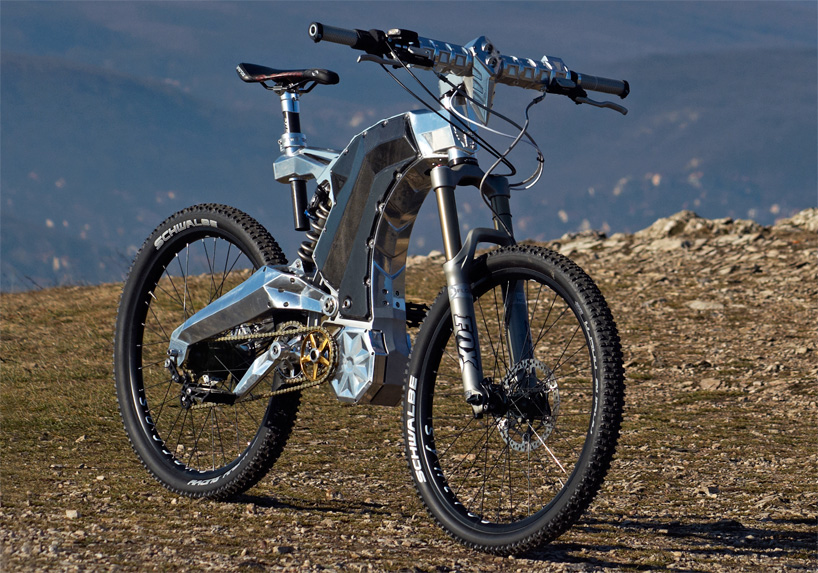 full view of the bike

in the hybrid bicycle, a sensor monitored drive system automatically optimizes the power input of the motor relative to the rider. the motor itself does not drive the pedals, but rather the system will engage when sensors register that the user requires additional torque.

the motor, as well as the bike’s lighting system, is powered by 22 tenergy batteries, typically used in hybrid cars. current technological limitations put the lifespan of most ebikes at about two years, with batteries that last only 500-700 charges, but those powering the electric motor of the M55 are guaranteed less than a 9% performance loss over 1000 charge cycles. 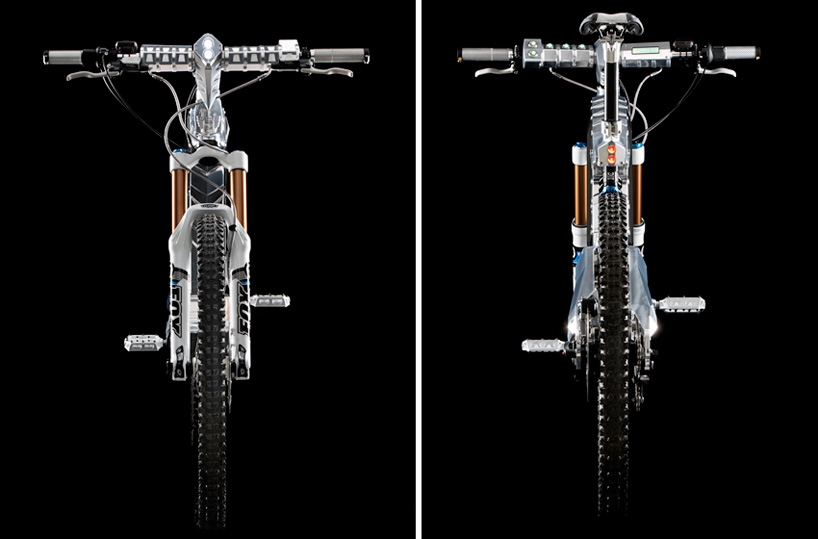 views of the bike from front (left) and rear (right) 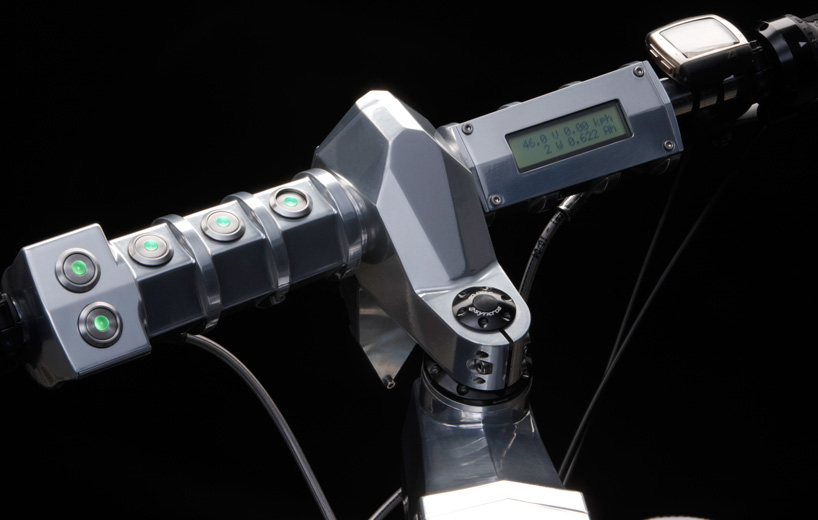 custom-made aluminum alloy crank arms are designed to interface with specially designed chainrings in converting the energy from pedaling into kinetic motion.

drive control is installed directly into the axle connecting the two crank arms, passing in front of an optical gate that determines the pedal cadence and calculates the optimal motor assist value. a separate optical gate prevents drive assistance when the biker is pedaling backwards, and another safety mechanism prevents a surge in motor drive even if the rider starts the bike while in a high level. 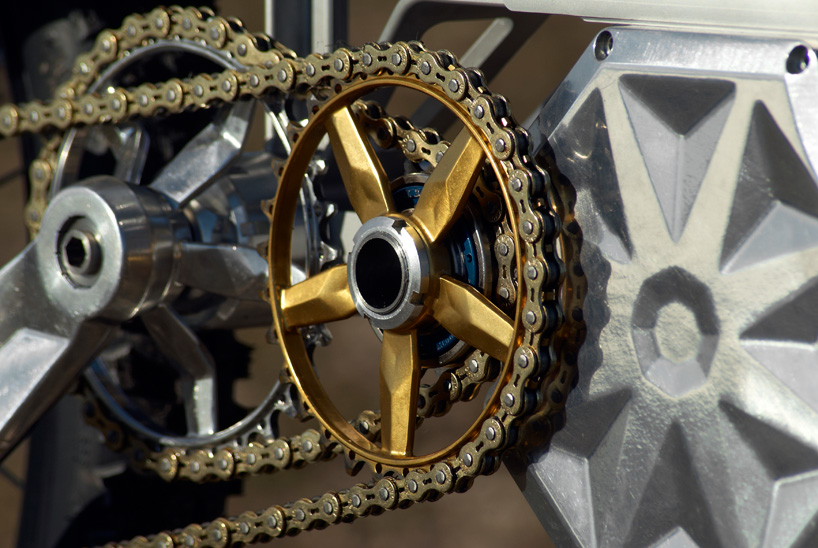 detail on crank arm and chains

the handlebar of the ‘beast functions as the bike’s control panel. housing the gear change mechanism and featuring an inset LED lighting system, the panel contains LED-lit control buttons and a digital display unit with night mode.

all elements of the machined metal and carbon frame and the handlebar control panel are water-resistant. 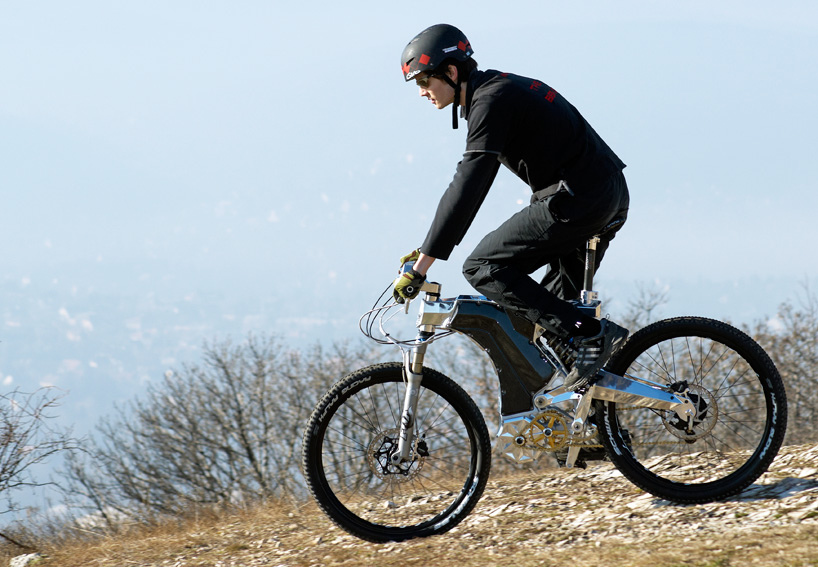 the bike is designed for off-road use, including rough and steep terrain 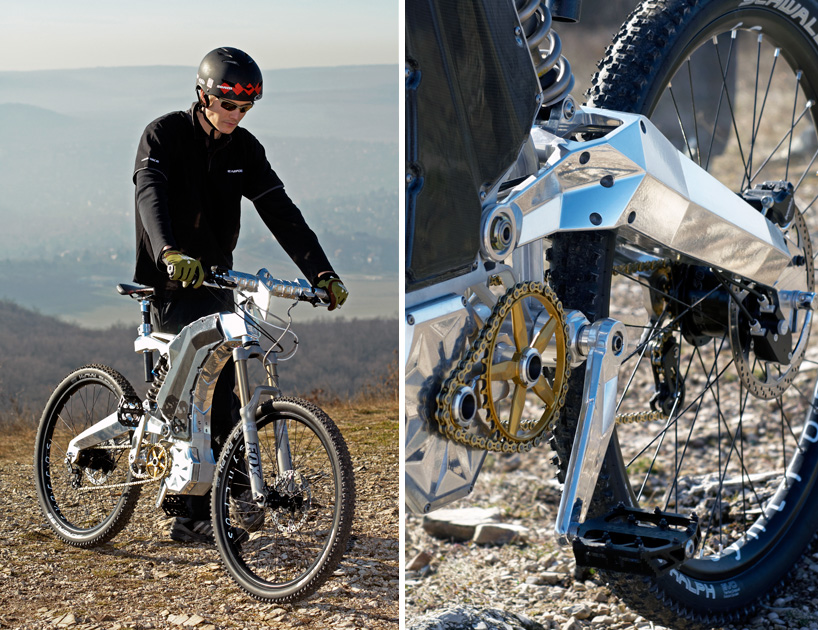 shots from a test drive in january

the ‘M55 beast’ debuted at the 2010 SEMA auto show in las vegas, with a commercial release expected for spring 2011.

the company has also designed two new models: the ‘daemon‘ urban bike, and the ‘shadow‘ model, a less expensive, aluminum-form version of the ‘beast’.