alessi presents new works by designer stefano giovannoni with rumiko takeda in collaboration with the national palace museum of taiwan at macef milano from january 18- 21, 2008. the series of tableware pieces is named ‘orientales’ and is the second collaboration between the two designers and the national palace museum of taiwan after the previous ‘chin family’ series. the new pieces include ‘lily pond’ a sushi set, a tea and coffee service and various other tableware pieces. ‘lily pond’ consists of a plate and chop sticks made from melamine as well as the ‘lily bird’ soy sauce bottle, bowl, chop stick support and ‘lotus’ dish all made from fine bone china. the rest of the ‘orientales’ series combines plastics with ceramics in an array of vibrant colours.

see designboom’s other stories on the ‘orientales’ series by stefano giovannoni for alessi here and here. 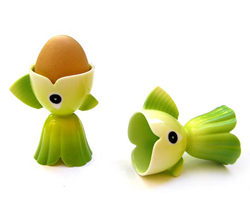