‘my concrete city’ is the latest jewelry collection by lebanese designer margherita abi hanna, influenced by modernist architectural works that make-up beirut’s distinct urban landscape. being one of the most dynamic capitals in the world, beirut has a vast architectural history that reveals its rich past and distinct cultural influences. however, the city is currently witnessing a wave of demolition of its historic buildings — which are characterized by unique aesthetics and material styling that the generations to come will probably never know of. 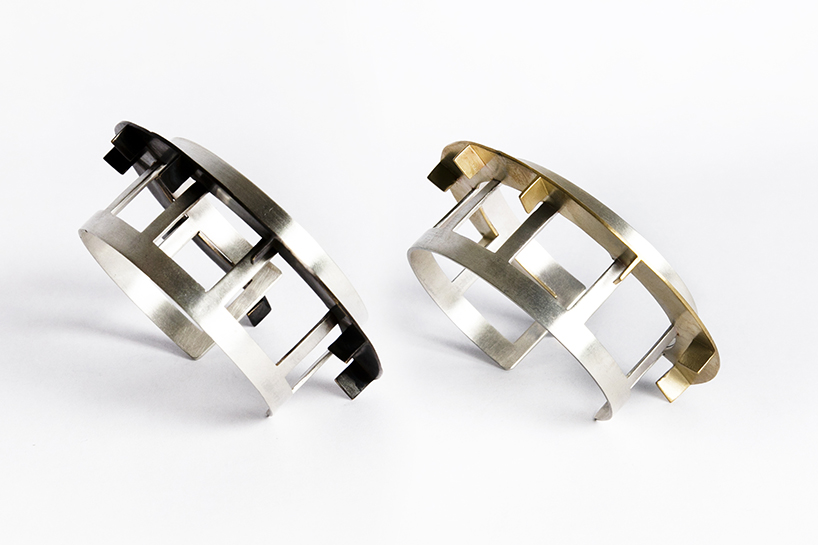 hence, through this collection, margherita pays tribute to these fading architectural works; cast in silver and concrete, the accessories honor and preserve elements of beirut’s built heritage by adapting signature design features into iconic pieces for both men and women. according to the designer: ‘many of our built treasures have been so defaced and veiled by a preposterous layer of shop fronts, neon signs and electrical wiring, that they have already visually disappeared long before they will physically vanish. I realized this one day, when I decided to look up while walking on the street that I had been living on for four years. there were some gems I had no idea existed, which is why I chose to honor these distinctive architectural works, these jewels that deserve to be recognized for their contribution to our city. choosing details from these building, drawing inspiration from them and adapting them into jewelry is my way of preserving part of our urban fabric that is on its way to extinction’. 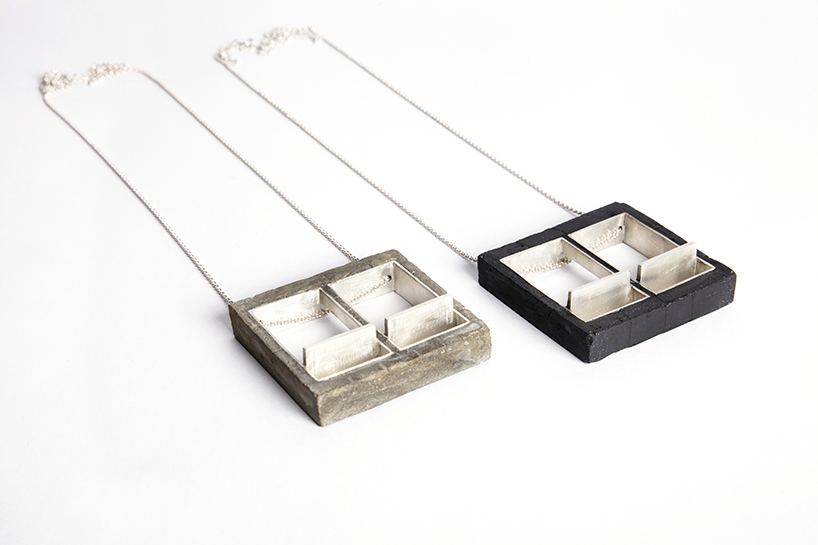 margherita, upon returning to beirut after her one-year masters in milan, launched her very own studio in 2010 where she produces contemporary jewelry pieces that feature distinct structural lines and architectural details. indeed, this exploration of geometries has always been an interest of hers. she explains further by stating: ‘my father is an architect and I’m sure that has influenced me. our surroundings tend to integrate themselves into our work automatically whether we like it or not. our mind is constantly saturated with what we see and experience around us, and that comes out in what we do subconsciously’. 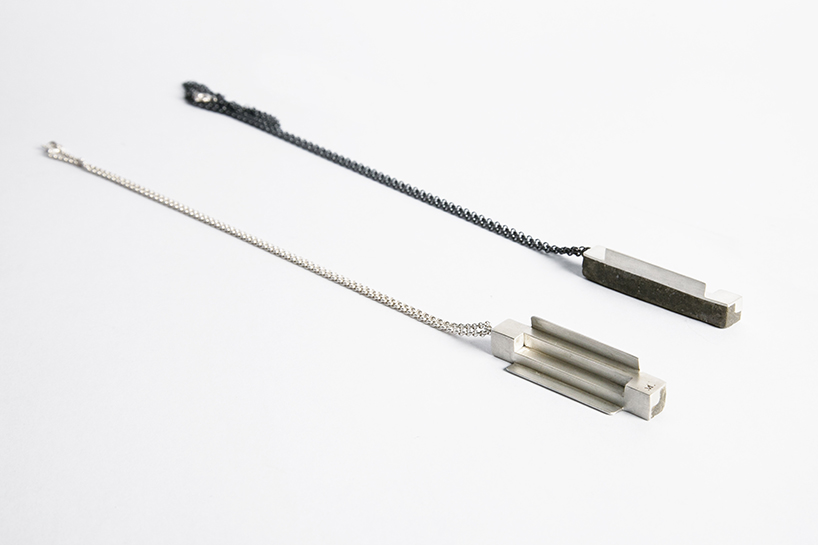 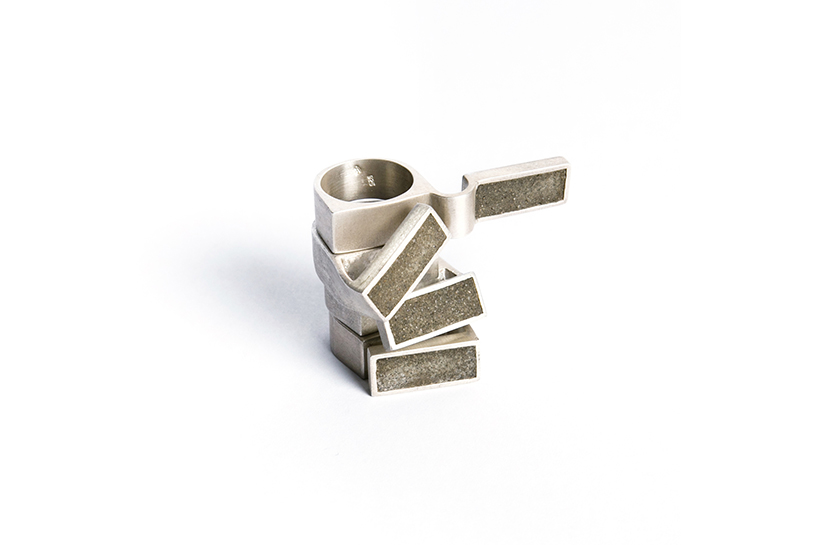 a series of stacked architectural rings with concrete inlay into them 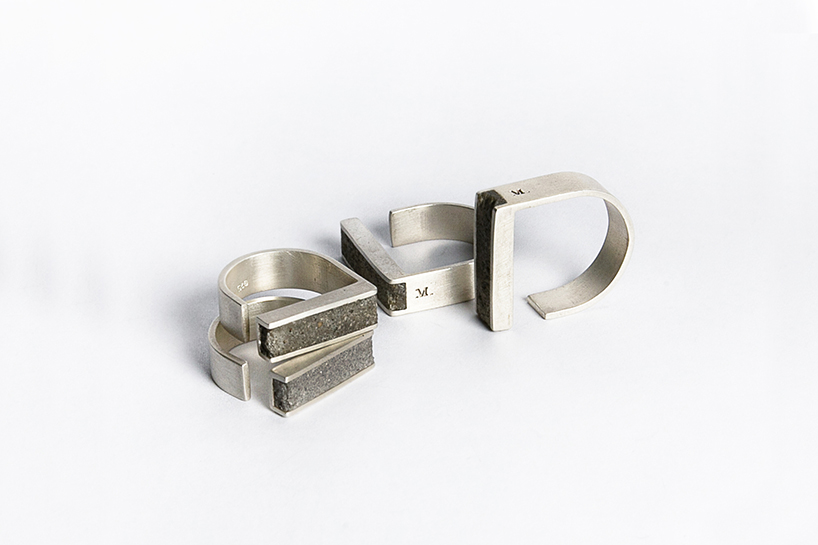 the nsouli 56 in silver and concrete 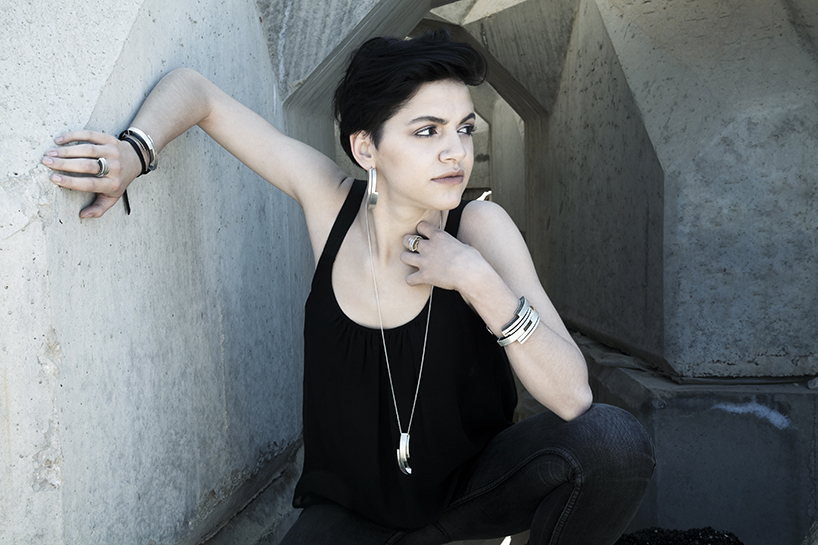 the afeiche 62 earrings, cuffs, rings and pendant all feature the same balustrade detail from the building itself 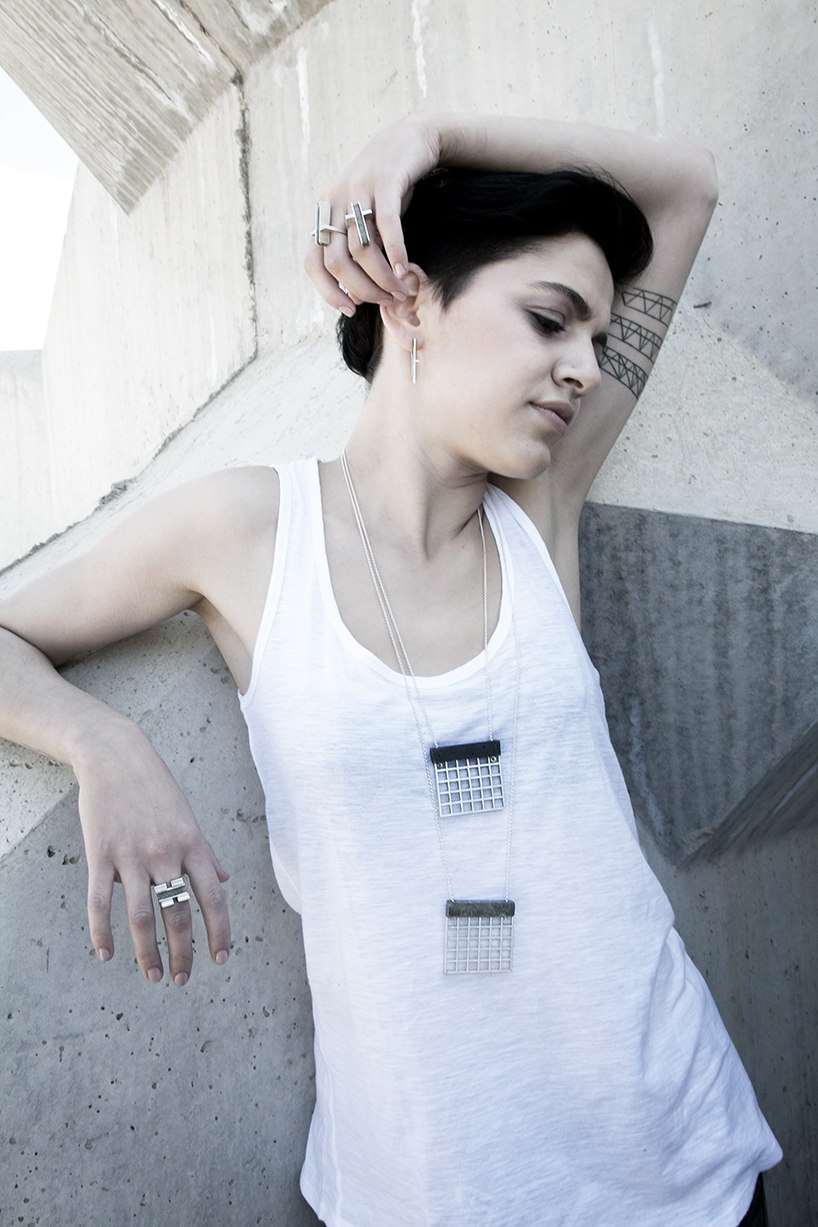 pieces taken from different buildings can all be matched together 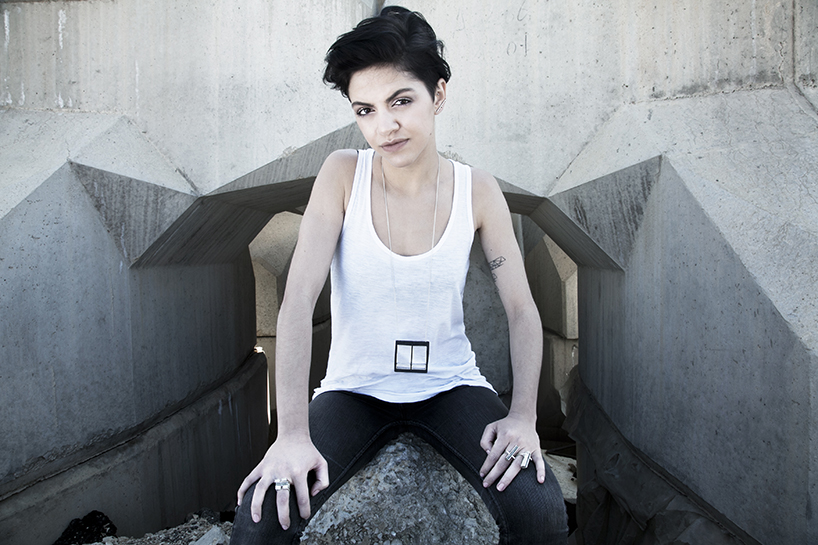 the Nsouli 56 pendant worn with a selection of rings 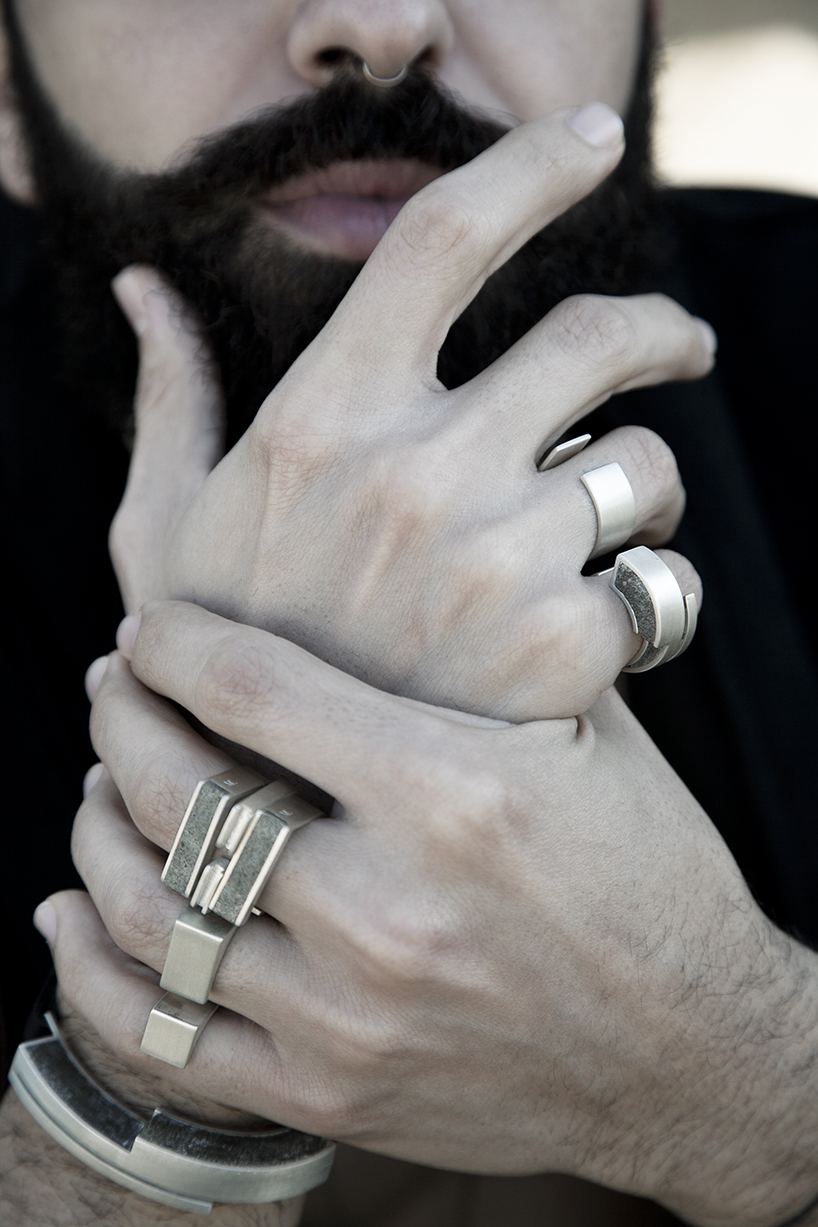 most margherita rings are designed for both men and women 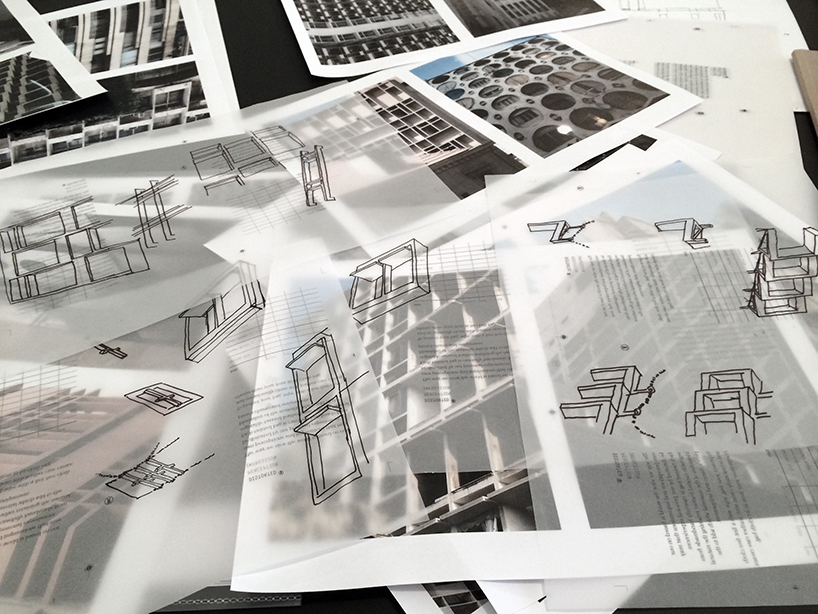 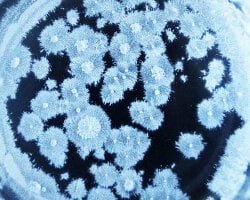 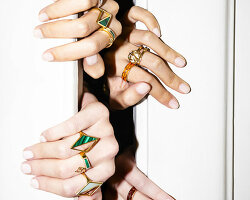 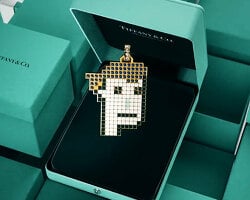