designboom attended the official opening of italian design factory alessi‘s new flagship store in milan. spending nearly 24 years on corso matteotti in a space that was designed by ettore sottsass and later modified with new display requirements by atelier mendini, the original alessi flagship store represented a key address in the pantheon of italian design, just a short walk from city’s chic via montenapoleone.

celebrating its ninetieth anniversary this year, alessi’s mainstay has now moved to via manzoni, 14-16 into a 170 square metre space that has been conceived by catalan designer martí guixé. the project follows the success of the 2008 collaboration between the designer and alessi, when guixé developed the company’s shop museum in paris. referring back to this original concept, this new store at via manzoni is a more complex and refined incarnation of that first idea. 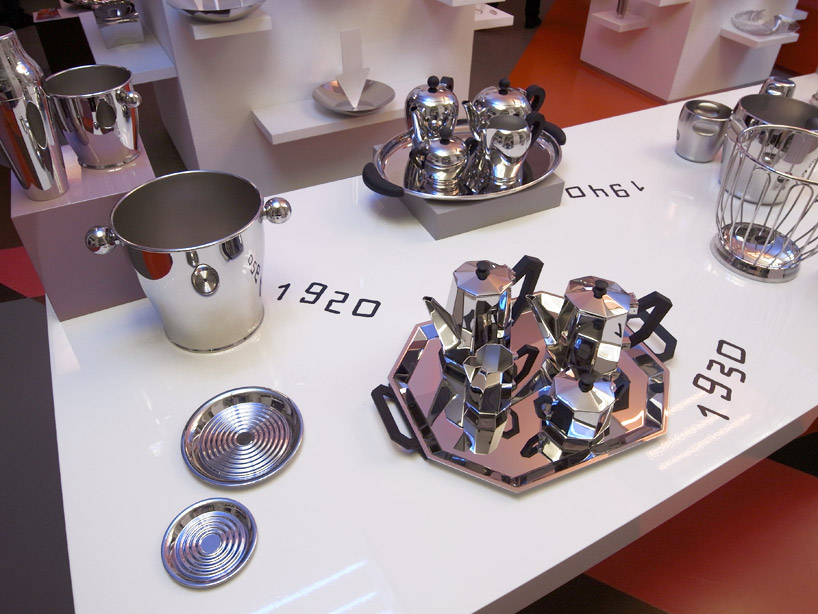 guixé’s design divides the new store into four sections: set, museum, shop and wunderkammer, each one characterized by its own particular style from the display elements, to different lighting systems that have been designed by by guixé for the space and produced by italian furniture manufacturer danese. 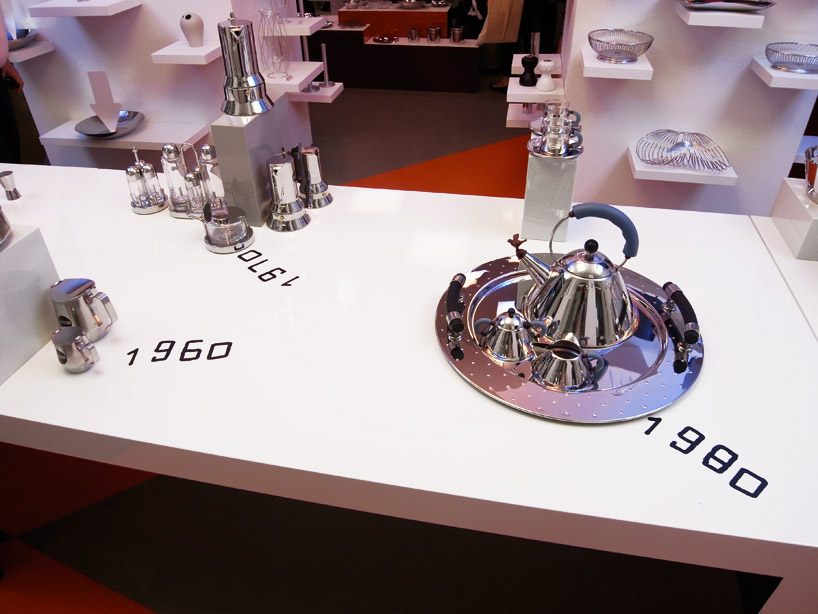 ‘set’ is the large space which overlooks via manzoni through three arched windows. facing outwards to passersby, this area is well-defined by podiums in the windows and a long central table, whose glossy white surface reflects the red, white and blue halos of the three sculptured hanging lamps. this area is called ‘set’ as it will host a range of events including themed exhibitions, historical collections, constantly evolving and not necessarily connected to the items on sale. the large back wall will act as a communication space that will be customized for each occasion. 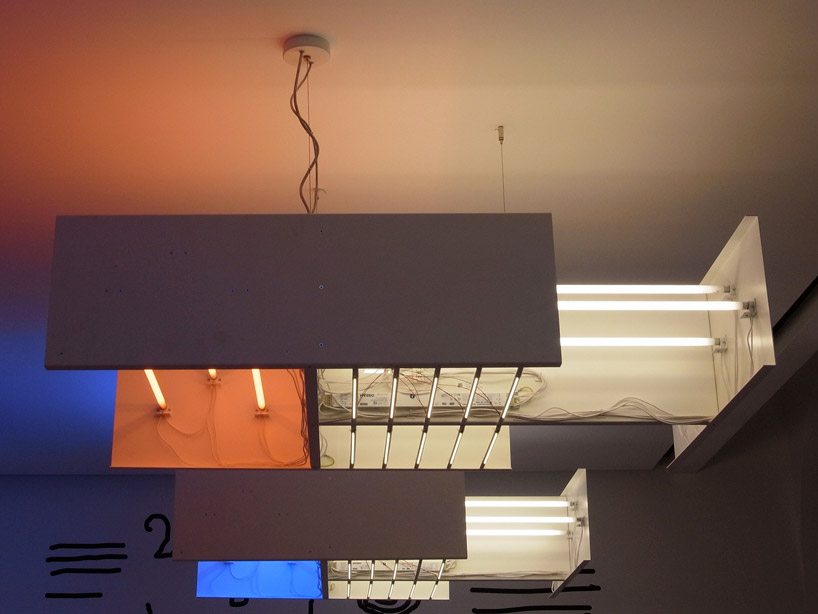 the sculptural lamps which create an interplay of changing light, hanging over the long central table in the ‘set’ area of the shop image © designboom 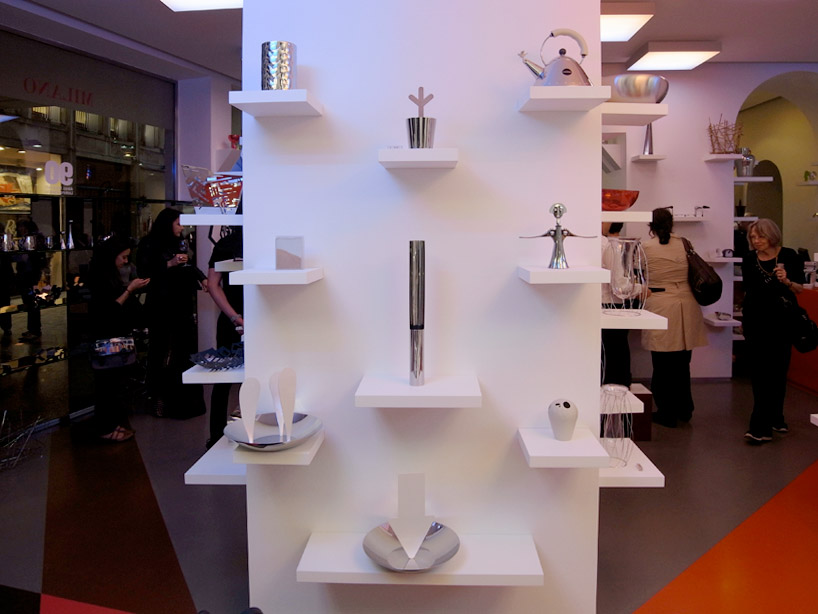 adjacent to the ‘set’ is the ‘museum’ which directly draws alessi’s paris museum shop. one enters the store through this space which is filled with small, white cantilevered shelves that line the walls, along with precise volumes in shades of glossy reds, displaying a range of contemporary alessi designs. the lamps, also reference the paris sotre, reflect and create multi-colored plays of light. 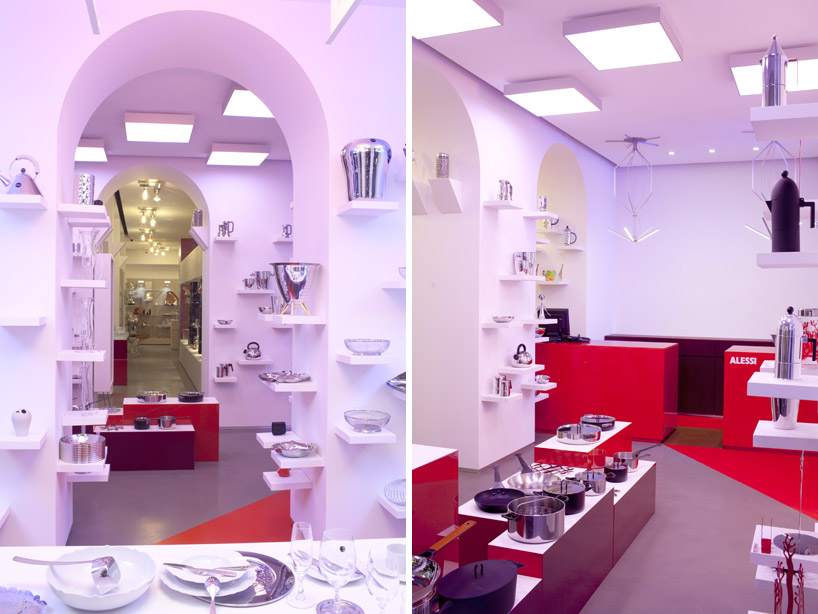 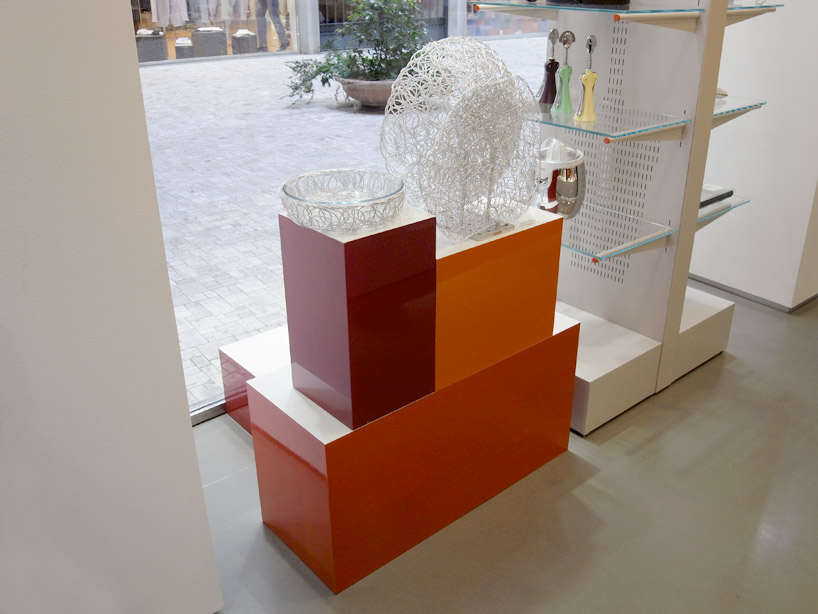 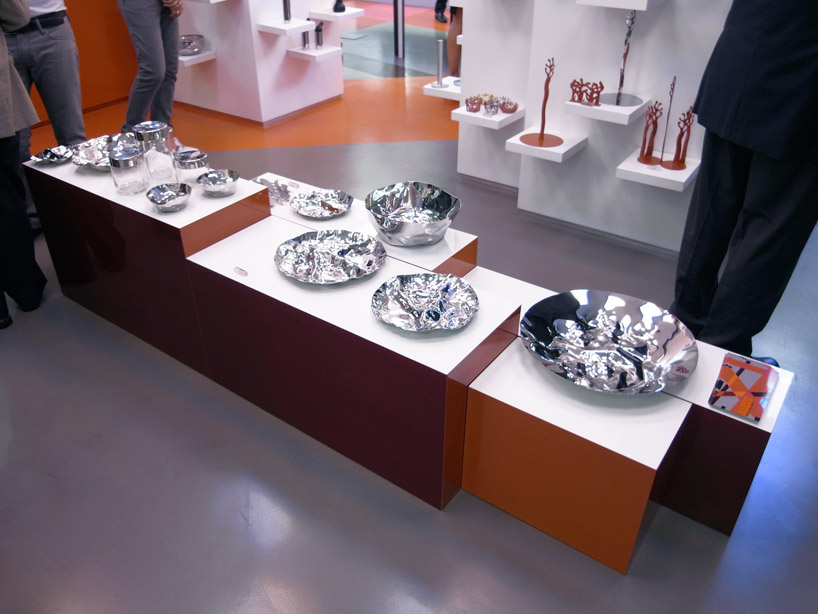 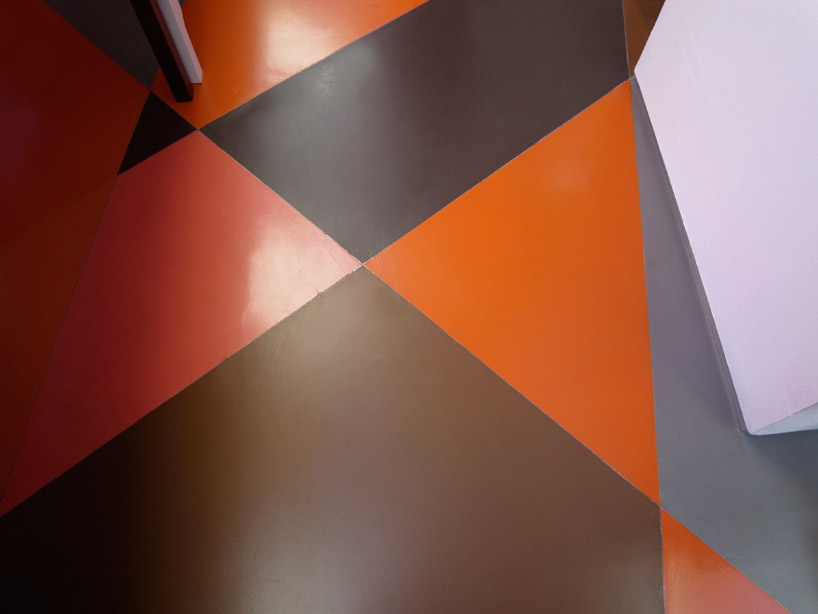 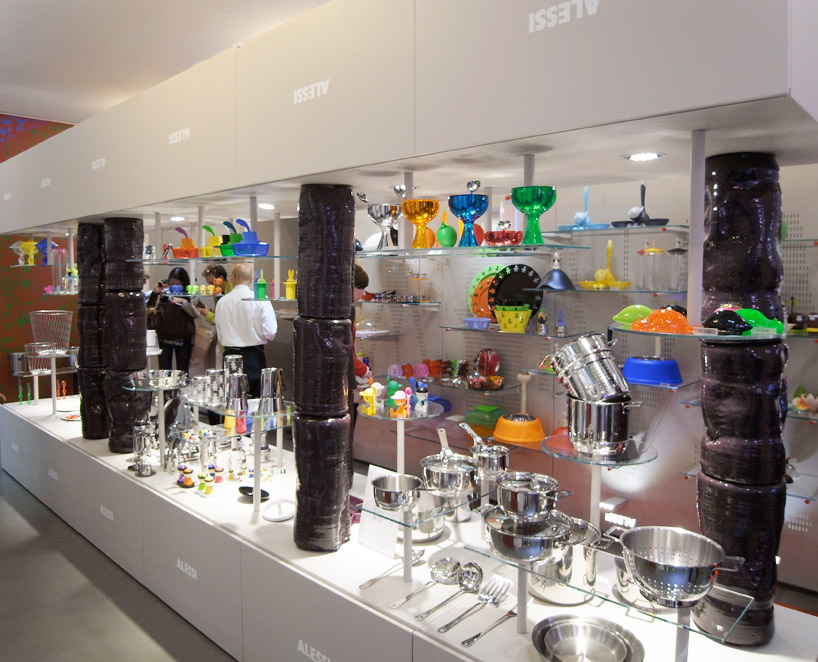 the largest section of the new flagship store is the ‘shop’, and reinterprets the alessi store design via its corporate furnishings, however used in a anomalous and personalized way, even upside down. this area directly refers to the alessi shop concept developed by alessandro mendini. even the ceramic columns which guixé has designed, are a tribute to the creative, and sometimes still handmade, process that underpins a designer’s activities. 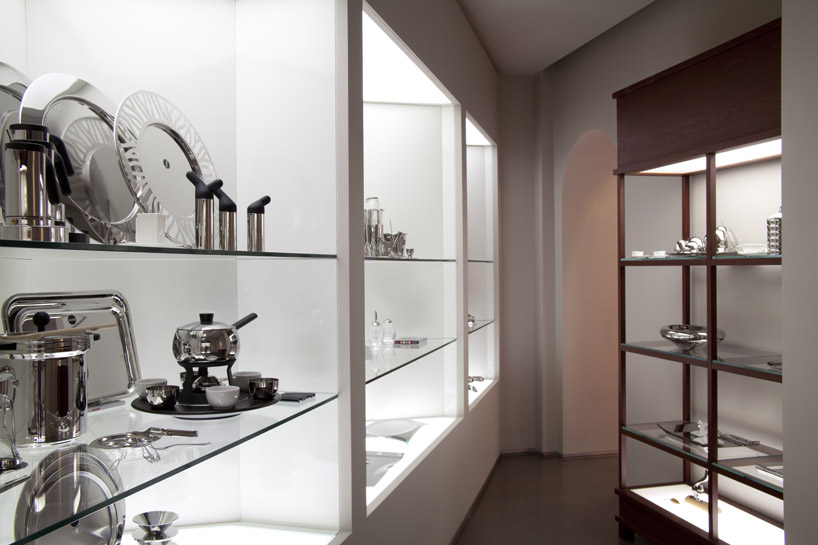 ‘wunderkammer’ is the most hidden and introverted space within the store. it is a place in which one is invited to reflect and appreciate even the most smallest and precious objects from the alessi archive. the triangular shaped room is dark, illuminated by opal light that comes almost exclusively from the display elements, emphasizing the value of the pieces being showcased. 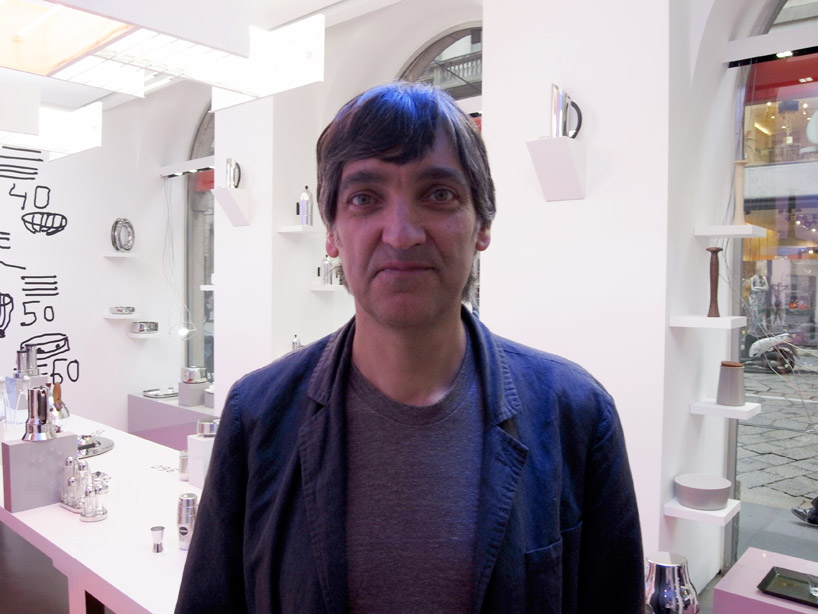 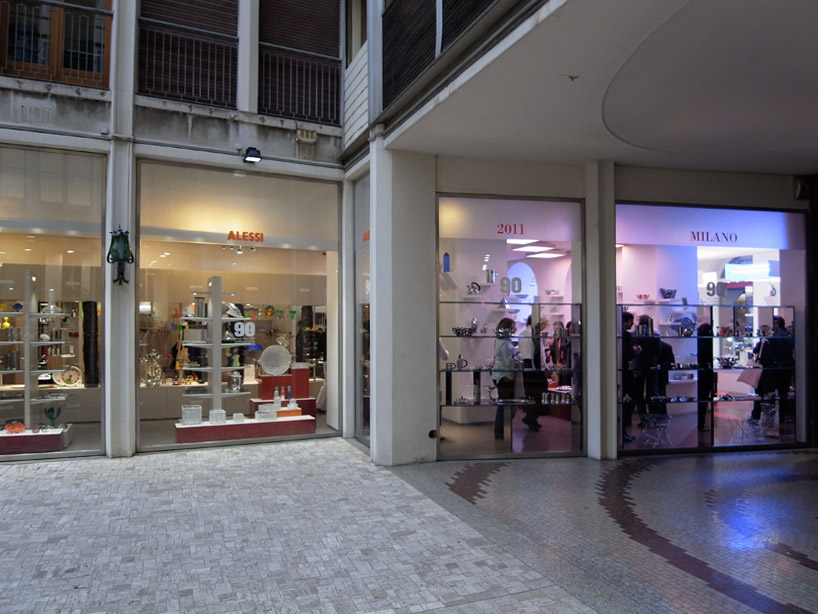 exterior view of the alessi’s flagship store from the private courtyard at via manzoni, 14-16 that is shared with poldi pezzoli museum image © designboom 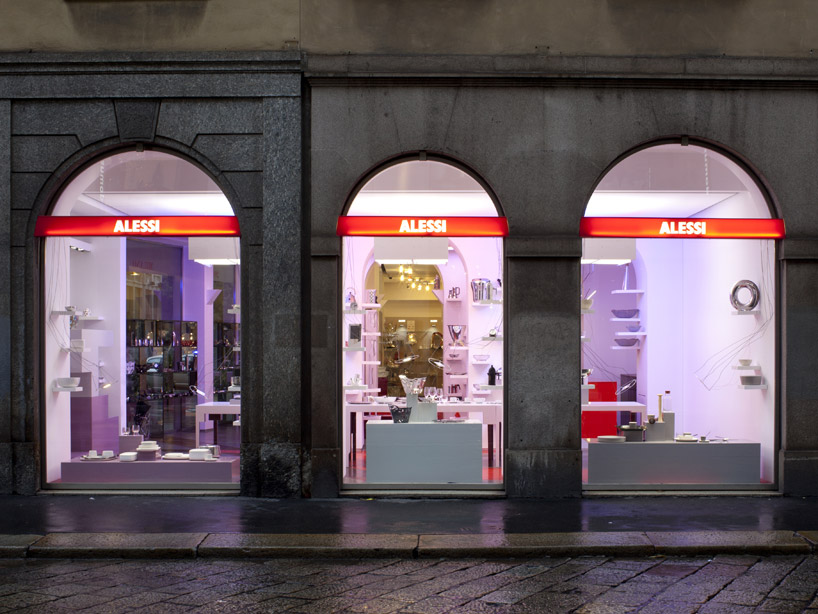 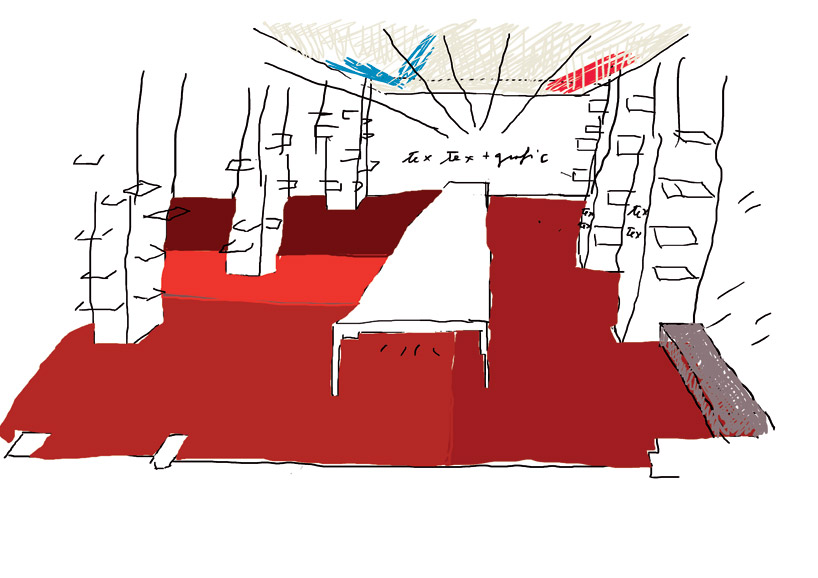 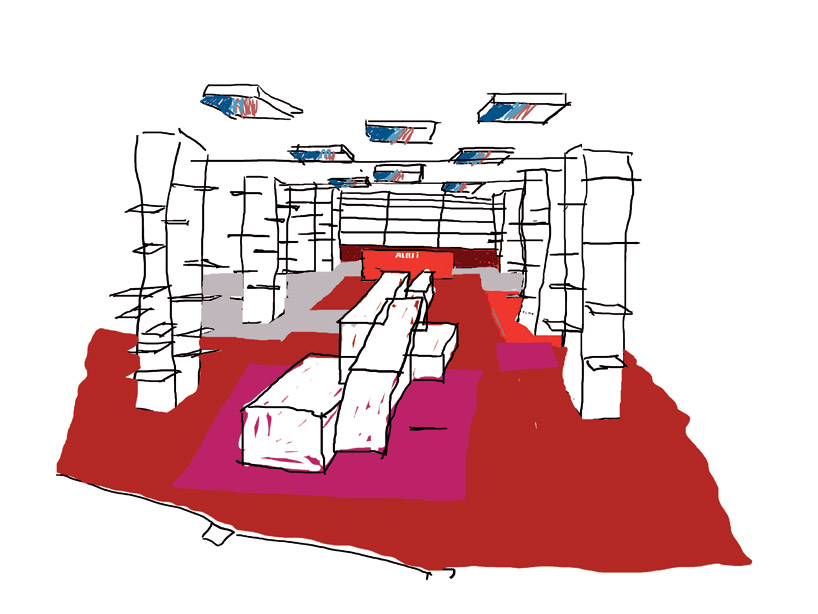 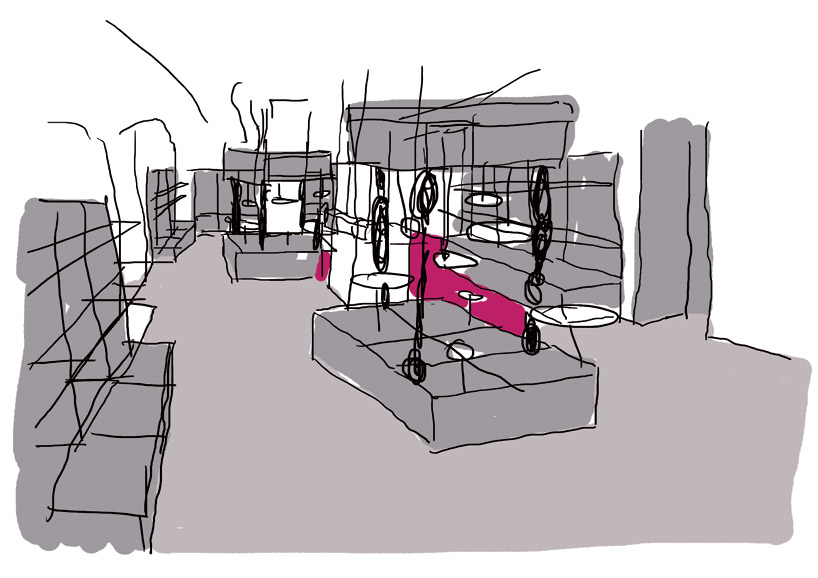 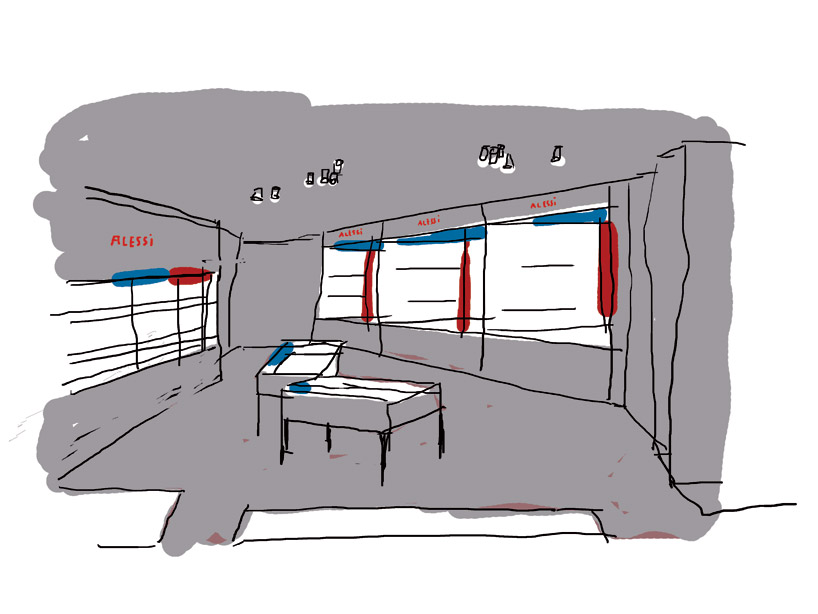