designboom recently spoke to martin lotti, creative director for NIKE football, at the european launch of the 2014 brazilian national team kit in london.

DB: please can you tell us a bit about your background?
ML: I studied design at the art center college of design, first in la tour-de-peilz, switzerland and then over in the states at the los angeles campus. when I graduated is applied for an internship at NIKE and they offered me a job, which I didn’t have to think very hard about accepting! back then I imagined I’d probably only work at NIKE for a few years but I’ve been here seventeen years now. 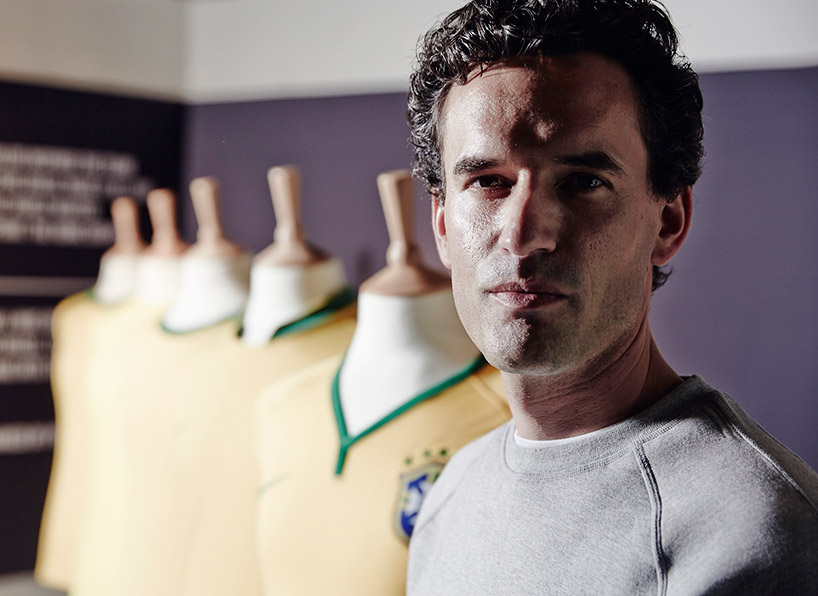 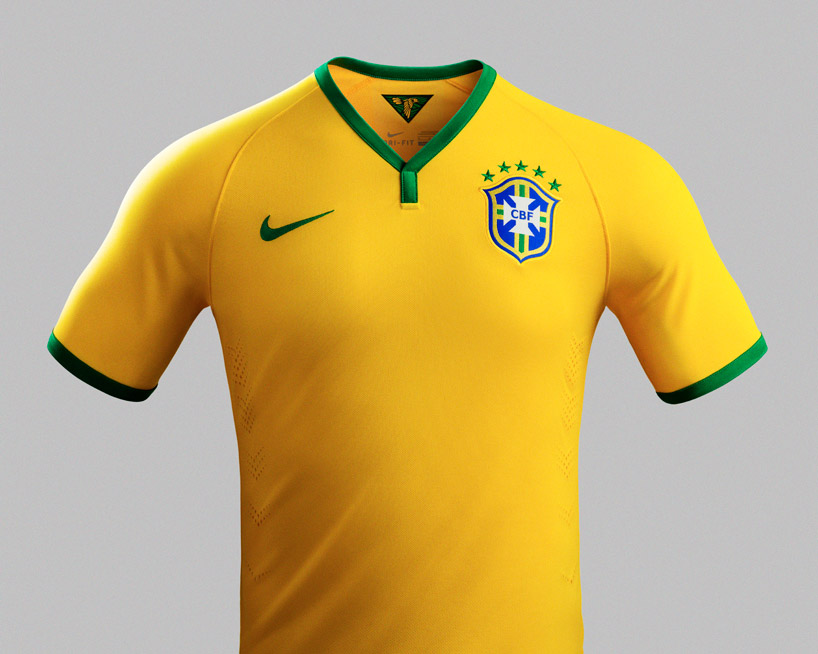 DB: how long does a football kit take to design from start to finish?
ML: with this brazil kit we’ve been working on it since the last world cup. so in this case four years. at the beginning you are just dreaming about what it can be then the process intensifies right down to perfecting the smallest details. it all starts with us talking with the athletes and listening to them about what we can improve. 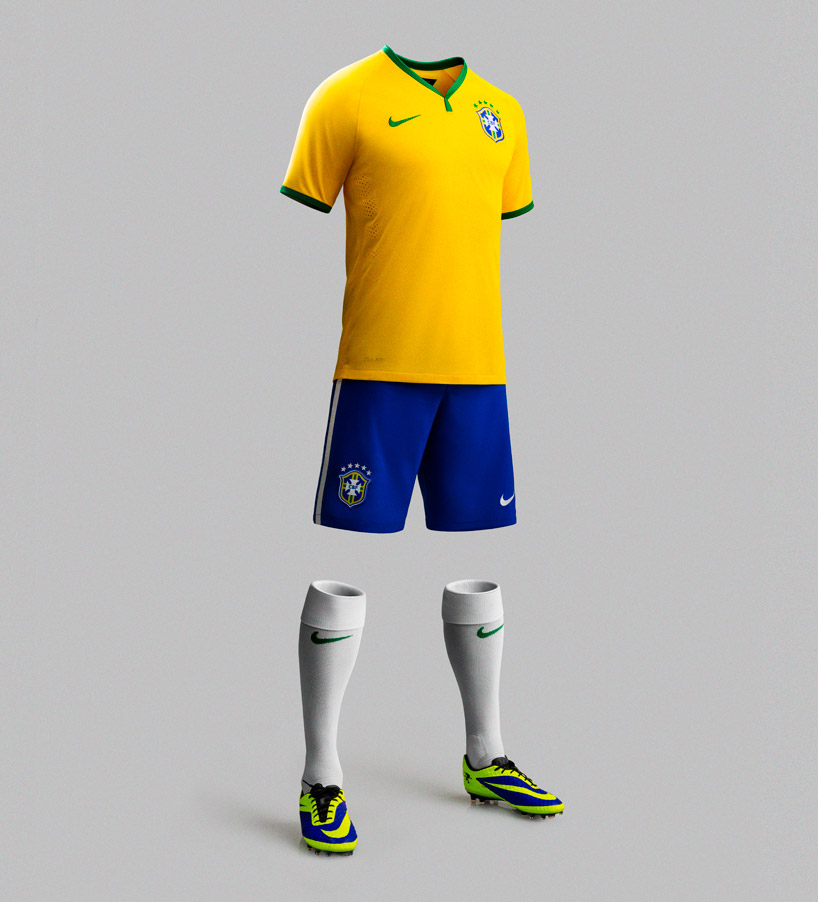 DB: approximately how many people are involved in the design?
ML: it’s a huge collaboration, with countless numbers of people. first we talk to the athletes, then the football association. then we spend time immersing ourself in the culture of the team, spending time in brazil and absorbing as much as we can. we then take all of this research back to our design offices in amsterdam and the US and ‘squeeze out the sponge’ as it were while we design the kit. the design process goes from a 2D process to a 3D process, to prototypes, then rigorous testing until we have our final kit. then it’s production, launch and use. the whole process combines design, scientific research and testing, brand strategy, marketing, and retail. 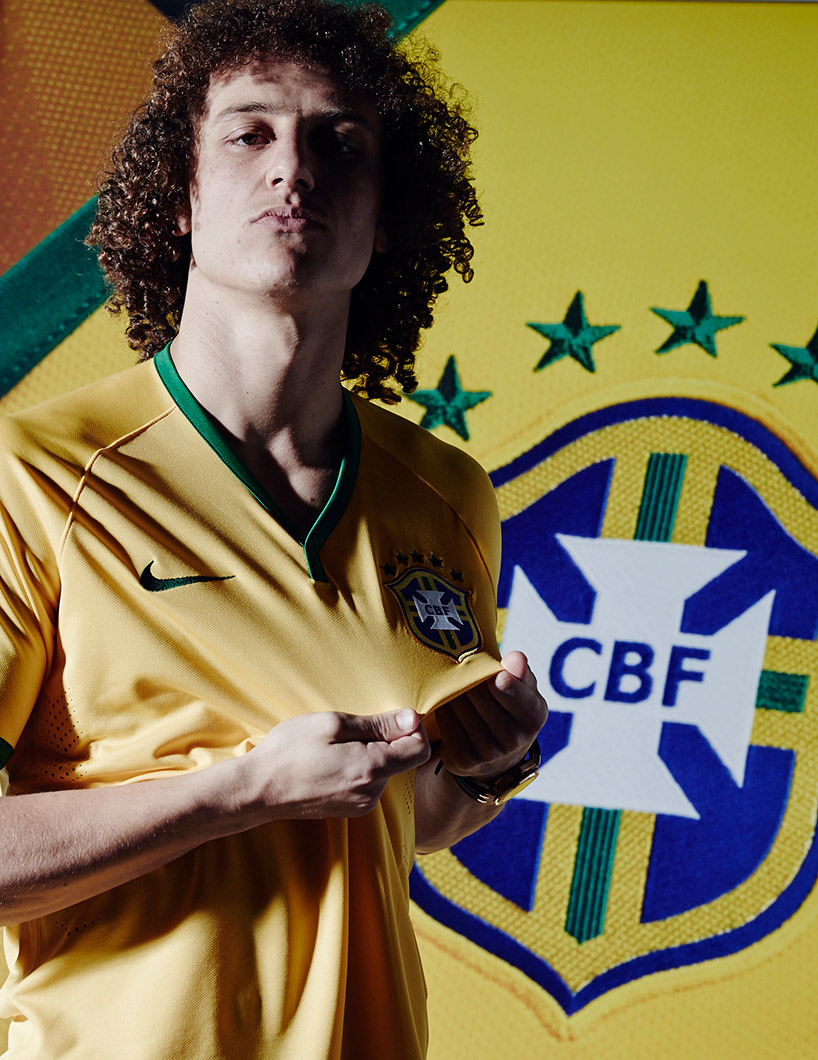 david luiz poses in the new brazil kit by NIKE

DB: what insights did the brazil players give you in terms of the shirt’s look?
ML: for them it’s about two things. the yellow color and the crest. we paid a lot of attention to those things. the yellow is uninterrupted and bold. the crest is slightly larger than on the previous shirt and we removed the word ‘brasil’.

it’s a very clean, iconic and memorable kit from the outside but inside there are details that only the player will see, from up close. performance details like the laser cut ventilation and design details like on the reverse of the crest, on the inside of the shirt it says ‘born to play football in portuguese’. there’s also a ‘canarinho’ bird on the inside of the back, which is the nickname given to the team because of their yellow shirts. 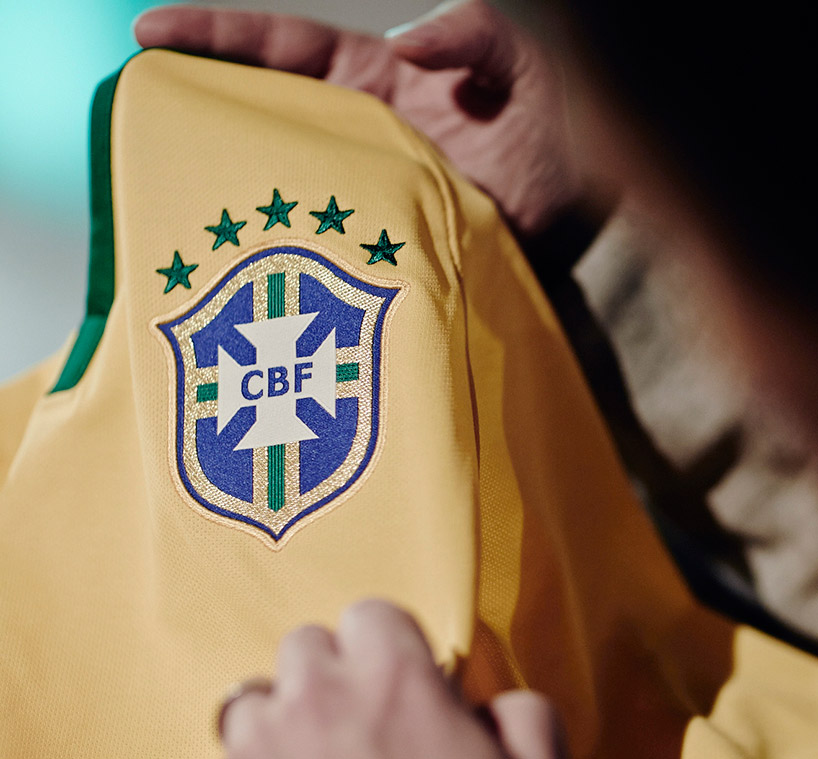 a gold colored metallic weave was added to the larger crest

DB: what do the brazil players think of the new kit?
ML: those I’ve spoken to love it, especially the details I just mentioned. a funny thing that happened at the launch in brazil was when phil scolari said ‘there’s just one thing missing… the sixth star!’. 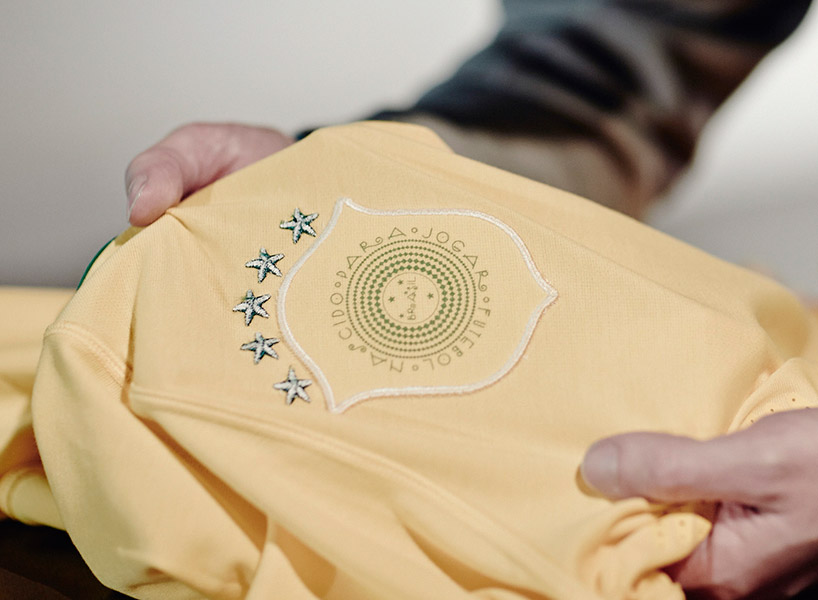 behind it on the inside of the jersey, lays a printed slogan ‘nascido para jogar futebol’- brasilian portuguese for ‘born to play football’.

DB: there’s a lot of ‘sacred ground’ working when it comes to a national team kit.
what are the limitations you face how can they help you from a design perspective?
ML: for many brazilians the yellow shirt is the closest thing to the national flag. so we have to respect that and build upon it we can’t seem to be re-designing a national flag. we honor the heritage and looked at how we could enhance it from a performance stand point. as a designer it’s a dream project, an honor to work on the shirt that brazil will wear as hosts of the world cup.

DB: is an away kit more fun to design in some ways?
ML: home and away kits are equally fun but definitely different tasks. today there’s usually a first, second and third kit for a club or country. each has a particular role and it’s own specific opportunities. with a national team the first kit is almost like a national flag so your trying to stay true to that, whereas the third are more about capturing the character of the team or other aspects of the national culture, and sometimes these kits also have their own very specific history. 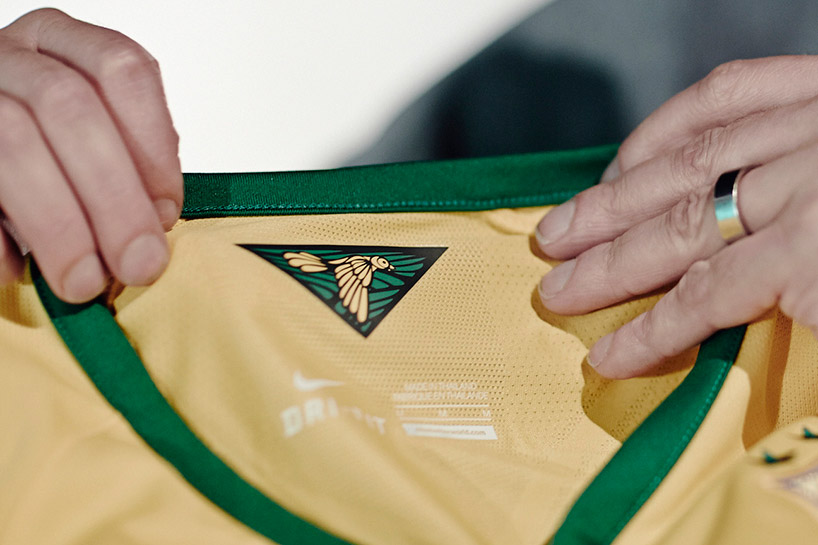 the ‘canarinho’ bird on the inside of the neck

DB: what does this new home kit represent about this moment in the country’s history?
ML: its modern forward thinking and full of pride. this is the moment of brazil.

DB: do fans feature in the research when you are working on a football kit?
ML: we tend to think that if we do right by the athletes then we’ll do right by the fans. it’s also much easier for us to focus on the needs and opinions of the athletes. that said we do consult style leaders and influential people within the culture of the team to understand what’s of importance to them. but ultimately we are designing a piece of performance equipment – so we need to deliver on that level first and foremost. 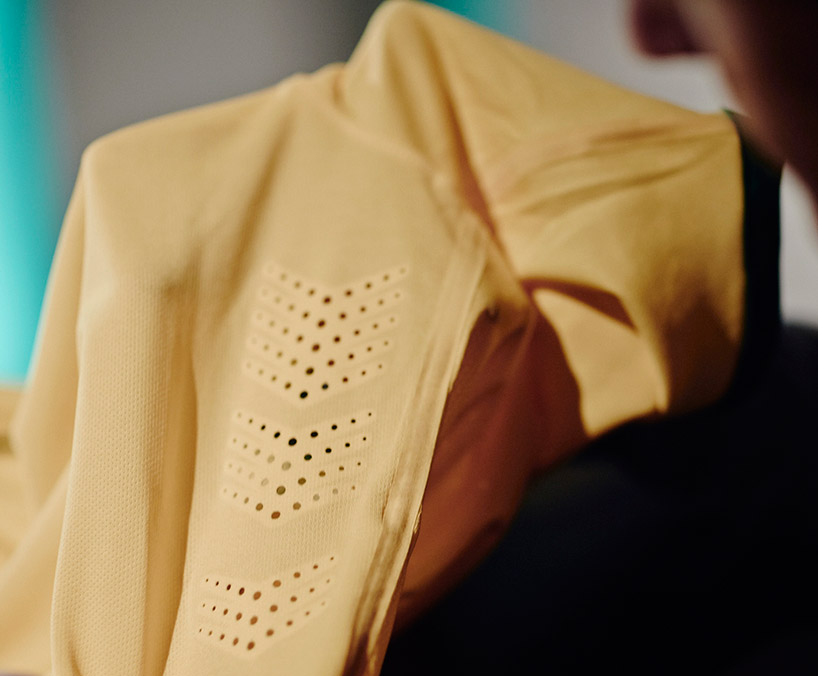 DB: how can you do more in terms of sustainability with products that have a short shelf life?
ML: when we design at NIKE we consider four important things which are; performance, style, soul and sustainability. our solution should tick the right boxes in each of those areas, that’s what makes a NIKE product. with regards to sustainability and this kit we have used recycled polyester in the socks, shorts, shirt and baselayer which is the first time in a kit. so it’s high performance with a lower environmental impact. since we started introducing recycled polyester into our football products we’ve recycled over two-million water bottles.

DB: is there any way that kits could be upcycled in the way some sports shoes can?
ML: we found that people tend to want to keep their football kits because they have sentimental value. but we’re always looking into how we can do things better. for example the dyes and textiles are something we constantly review to make sure that they are environmentally sound as possible. 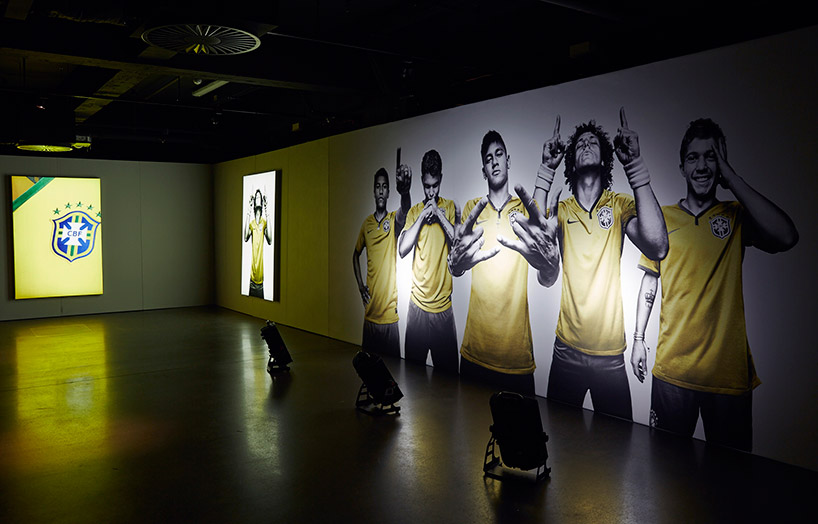 view of the european launch of the 2014 brazilian national team kit in london.

DB: what’s been the biggest challenge since you moved into NIKE football?
ML: rather than ‘challenges’ I think in terms of ‘opportunities’. to be working in this position in the year that brazil will host the world cup brings a huge smile to my face. it’s a massive responsibility but it’s very exciting! I can’t imagine how electric the atmosphere will be there this summer – it will be truly epic. 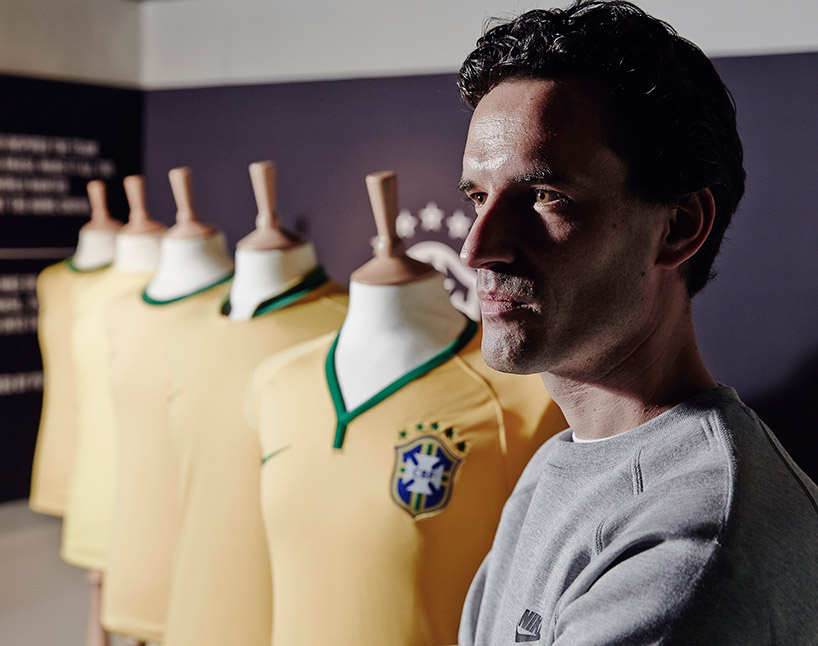 see our announcement of the 2014 brazilian national team kit »