in massimo cappella‘s family, food and eating traditions drive their lives so strongly that the italian designer inevitably became passionate about choosing ingredients and cooking as well. after moving to london, he had the chance to observe several professional chefs in a restaurant kitchen. ‘I wanted to learn how they practice their job so I was watching how they were manipulating food trying to absorb as much as possible for myself. the element that mostly captured my attention was realizing how differently the same recipe could have been performed. one same plate and taste could be created by the chefs in many different ways according to their experience and their perception,’ he states. cappella then realized that ‘personal experiences make possible for each of us to develop a highly personal way of understanding the world around us. so that when it comes to cooking a meal, everyone has their own ‘food identity’ expressed in the way meals are selected and manipulated.’ in support of this idea, he investigated ways to design tools for a project called ‘one way’.

while observing people in a culinary environment, cappella conducted another research study on how current utensils have been formed and developed through the ages. basic pieces for cutting, picking and scooping have respected the same shapes, going through a simple aesthetic restyling following new trends or materials. ‘cookery has seen a substantial evolution during the years, but the creation of tools have followed almost an identical design methodology. because of the nature of objects meant to perform a specific task, not too much freedom has been given to transform them. they have been mostly improved from an engineering point of view and restyled to engage a broader range of taste. I wanted to explore how I could create tools well performing because supporting specific ways of cooking and eating.’

customization is a method applied in many fields which mostly follows visual purposes or functionality. thus, the series matches the performance of a product to four different personas and how they interact with a space that has been constructed to support a majority of their characteristics. the following people are subjects which cappella has been closely observing for several months. 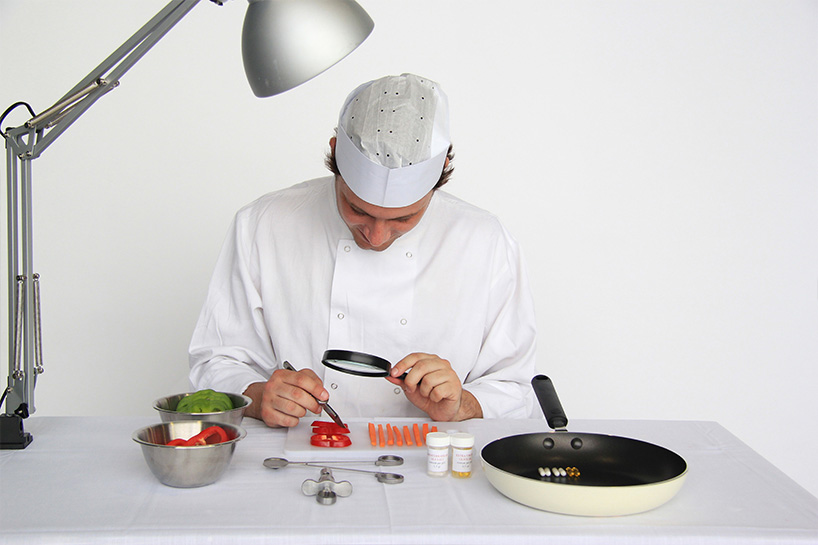 precision cooking is presented through the narrative of adrian, a man whose family moved from italy to the UK when he was a child. his mom struggled to find the ingredients to replicate what they were used to having back home, so she had to spend long amounts of time at the supermarket with adrian trying to collect them. the tastes of few recipes that he learned from his mom are strong in his mind. today, adrian is an engineer and he believes that everything surrounding him is driven by mathematic laws. he owns several motorbikes on which he spends all his free time simply adjusting nuts, polishing parts, and checking if all the mechanics are right, even if he is not going to ride them. 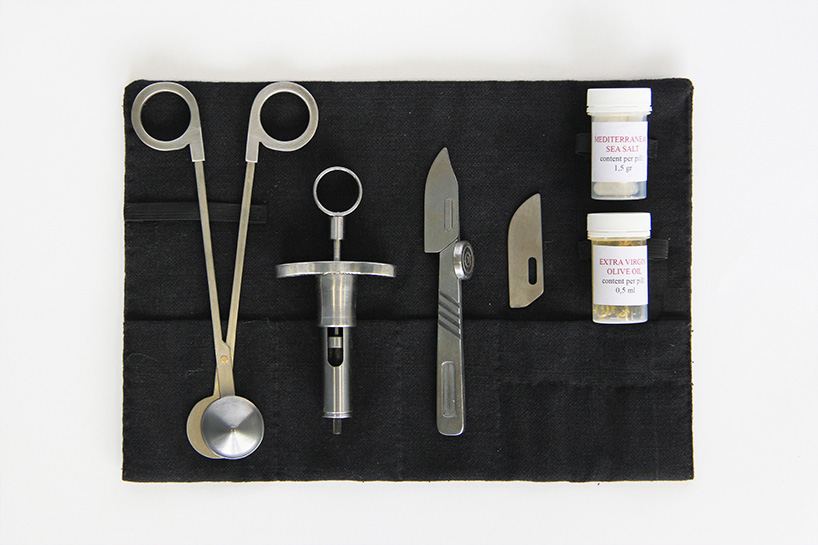 adrian does not cook often, and when he does, he mostly creates the old plates taught to him by his mom. the recipes are his bible. nothing can be any different from what is written. all of the amounts have to be perfect and the process strongly follows a fixed timing. in the kitchen, all the ingredients are ready in small bowls aligned on the table and no one can get close to the pot while the sauce is simmering. adrian is afraid of having a result which does not reflect his expectations, so everything has to follow rules, otherwise he would feel as if he is losing control over the process. 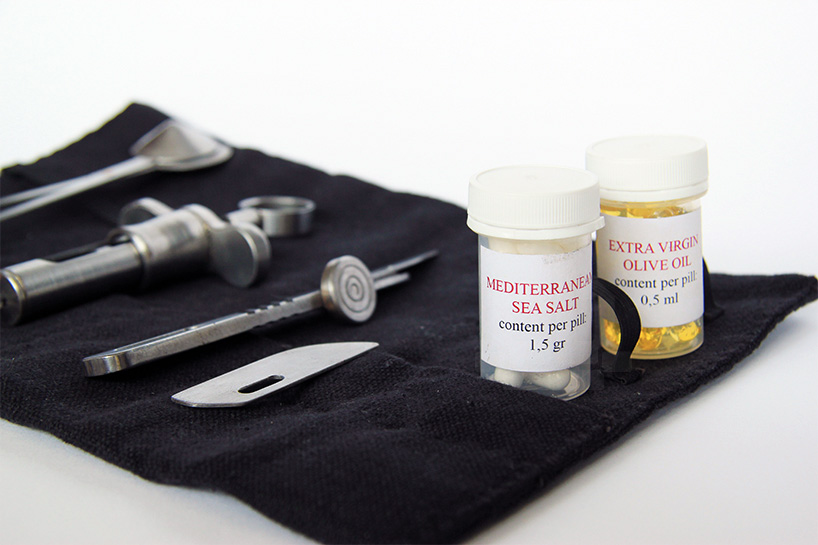 details of the steel pieces and capsules

the precision cooking tools set is fully made of steel. these objects allow the user to keep quantities and shapes always at the highest level of accuracy according with the recipe they are following. the syringe measures exactly one imperial tablespoon quantity of liquids (17.75 ml), the scissor measures exactly one imperial teaspoon of solids (5.91 gr), the scalpel knife allows for operating precise cuts on seafood and meat, and the mediterranean pills provide exactly 1.5 gr of sea salt and 0.5 ml of olive oil.

alex comes from naples in the south of italy. when he was a kid he was often skipping school to go work in the local food market to raise a small amount of money for himself. he left his academics at early age and he started helping his family’s bakery during the summer seasons when the town was full of tourists and was employed by other restaurants around the city. 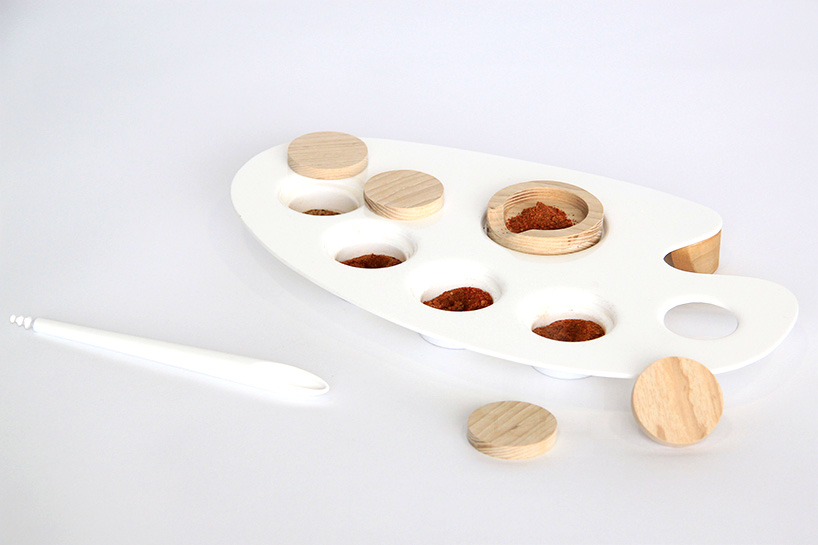 when alex was 22, he moved to london keeping practicing his job as chef. as a result, he is extremely confident with what he does inside the kitchen. all he puts in the pots only follows its instinct and knowledge. he doesn’t need to weigh ingredients or count units, but only does what he believes is the best. his workspace seems to be very disorganized, but he exactly knows where everything is. thus, he is capable of preparing food extremely fast and he jumps from one side to another like he is dancing. he has a solid technical base and knowledge of recipes, but every time he cooks he composes a personal creation. 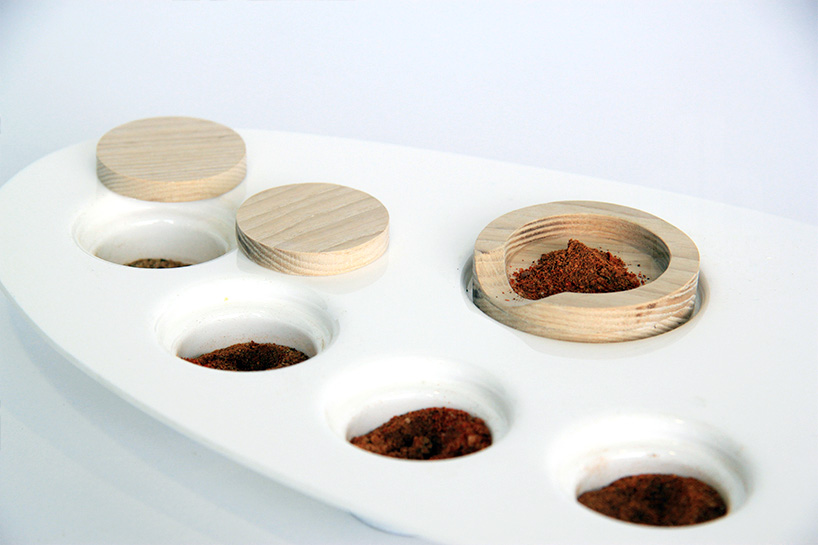 the object accommodates 5 different spices for mixing and collecting

in order to accommodate the needs of this personality, cappella has crafted the ‘curry palette’ with 5 basic spices for creating a sauce. the shape takes references from a color palette since the methodology of operating for this typology of cooks reflects several aspects of a painter’s performance. the center is occupied by the mixing plate in which all the components are blended together before going into the pot. meanwhile, the accompanying scoop has two functions: the front is the normative condition for collecting ingredients based on the user’s taste, and the back is a taster pin which goes deep into the pot for testing the flavor in case some adjustments are needed. 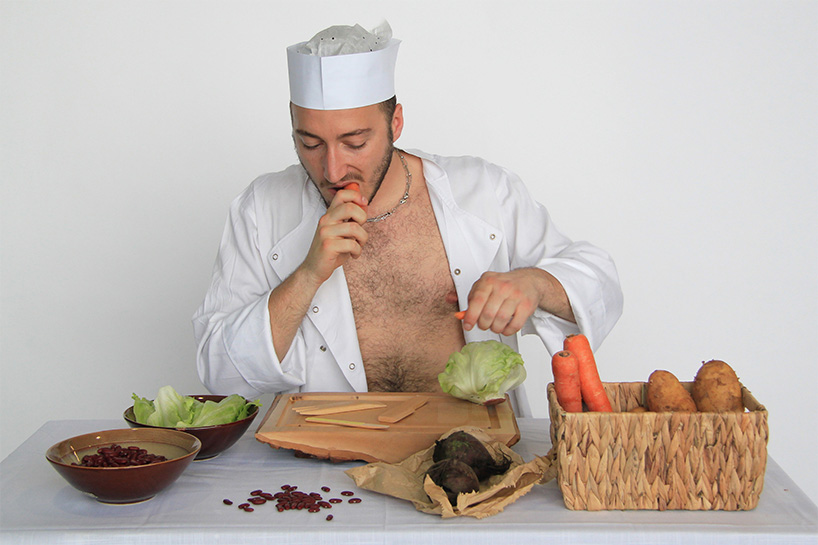 edelen is a 28-year-old graphic designer from chile. when she turned 23, she decided to become vegetarian because she could no longer accept the cruelty of killing animals for feeding humans. at first, her family was against her choice so she had to convince them that the diet was not harming her body. from that moment on she started her personal research on how the change could be as healthy as any other normal consumption. edelen started reading studies and articles about vegetables, also getting in contact with industrial food manufacturing techniques. 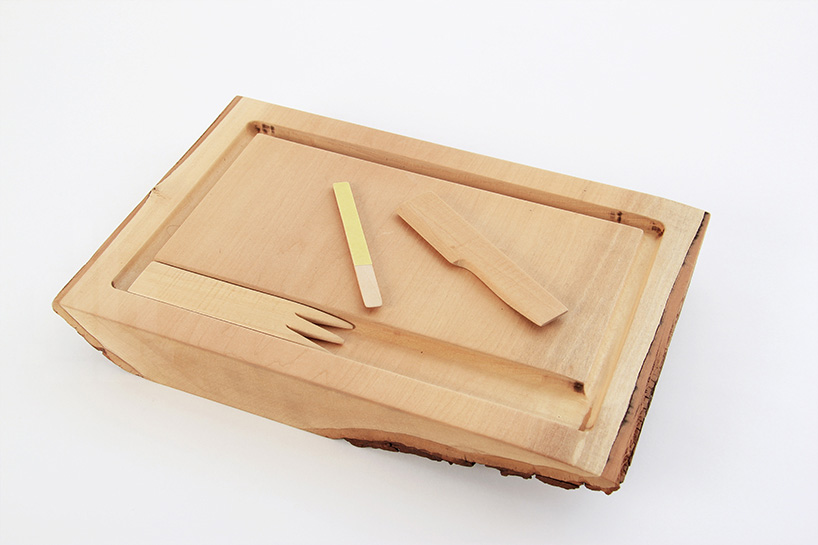 the idea of eating food heavily processed by manufacturers was intimidating to her because of the artificiality and the loss of nutrition. in response, edelen started avoiding them altogether, replacing them with vegetarian whole and organic ingredients. the image of food industry in her mind started to be associated to a negative aspect which had to be avoided. 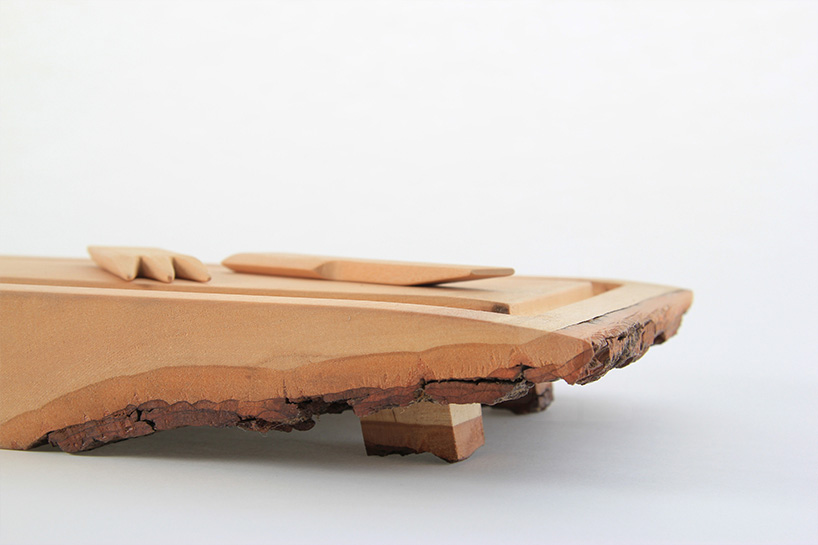 detail of the raw wood

taking this concept in mind, the ‘chopping board’ is a thick and rough piece of wood that has been obtained from a crude trunk collected in the southern italian countryside. the surface is the place where the most of the food preparation takes place. In this case it symbolizes an immaculate and natural environment where the food can seat without any contamination. The two simple tools are the only objects able to work the food and they have been designed for a low performance in order to limit the process applicable on the ingredients. Nonetheless the third tool which is a sharpener is provided to give the user the control of the efficiency of the tools and keep the user confident with the effectiveness of the process. 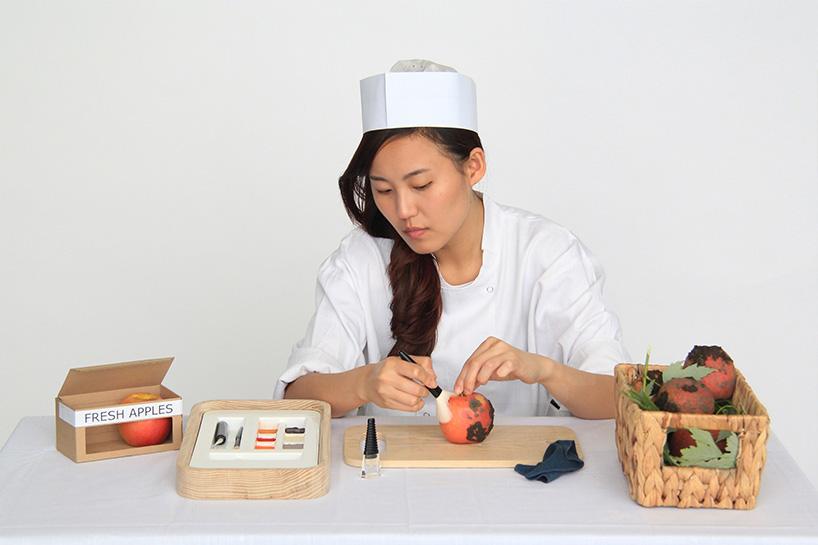 catherine is a law student living in london. she comes from a south african upper class family and left home after she finished high school to start university studies in europe. her relatives were very busy working all the time, so the most of the meals consumed at home were ready on the table, prepared by the maid. in turn, catherine has limited knowledge about the culinary arts and since she is very busy studying and working at same time she doesn’t have much time to practice home cooking. her usual meal is prepared in a microwave, and when she goes to the supermarket she only pays attention to prices, brands, and aspects of what she is going to buy. this reflects the fact that she doesn’t know the details of how food grows in nature and how it is processed before coming to the table. television and advertisements have provided her most of her information and now, catherine believes that a good food has to respect some elements in terms of aesthetic, smell, and layout. 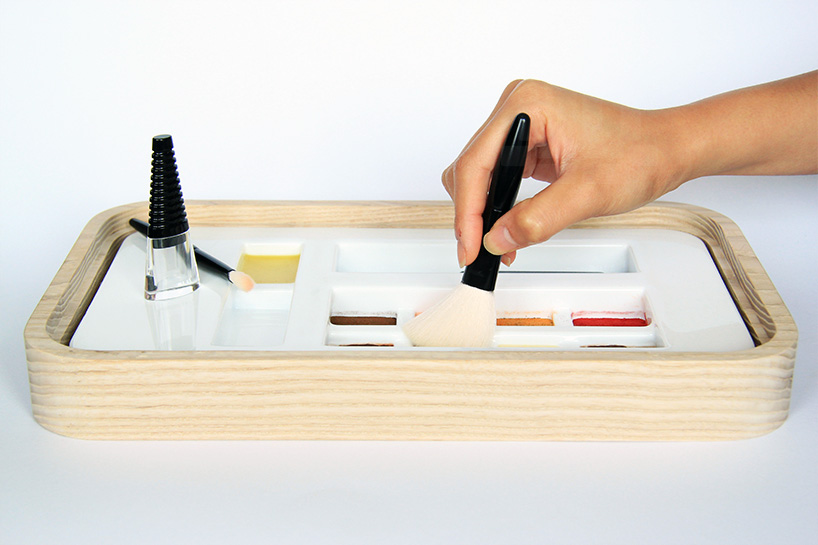 the food make up set in use

in accordance with this identity, the ‘food makeup set’ is composed of different products to allow consumers to fix and retouch what they are about to eat. all the of food cosmetic products are edible: beeswax for is included for polishing, powders for coloring, pastes for filling, and glue to help the users recolor, reshape, and adjust their produce, making them look like pictures from ads and packages on which this type of consumer relies on. 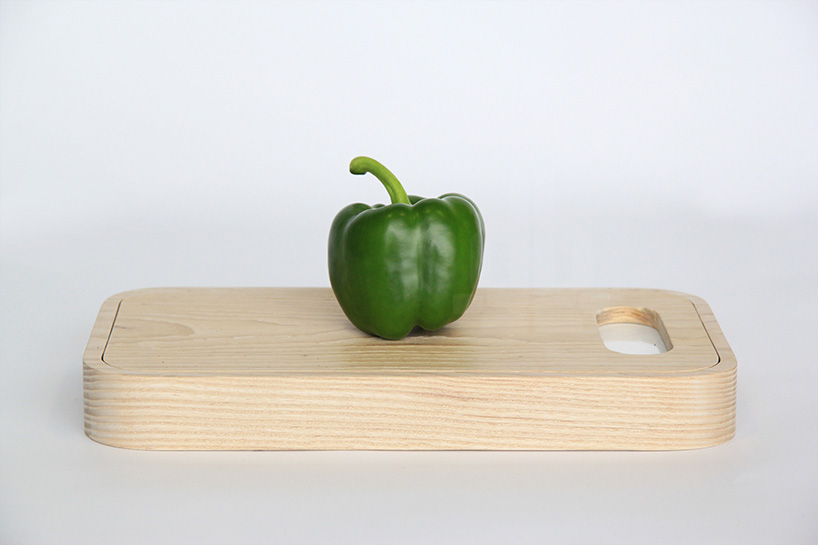