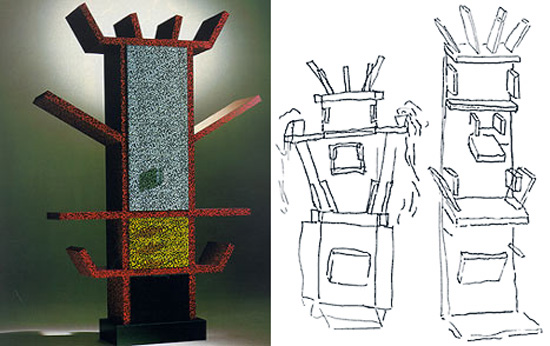 memphis was a landmark in design history. sottsass called memphis design the new international style and plunged the sophisticated and influential milan design world into a labyrinth of visual irony, puns and provocations. the standards of ‘good form’ design that had been considered unassailable for years lost their claim to timeless validity for sottsass and his fellow-workers. the idea they had in common was to eliminate the peaceful conformity of furniture design and present concrete alternatives to the late 70s standard formal culture.

the playful colours, cheap materials and kitsch motifs of the furniture, ceramics and glassware unveiled by memphis designers at the 1981 milan furniture fair split the design world and caused a media sensation after years of drab rationalism.

lots of brightly coloured, neo-1950s plastic laminates covering everything from crazy sideboards to bonkers beds. was this gimcrack stuff really so influential? had the brown-and-orange 1970s been so boring that product design had to descend into these cartoon capers? it was about turning the design world upside down.

the ideas of the memphis collective were embraced by design students of the time: memphis was the major influence on philippe starck, jasper morrison and marc newson…