to turn the faucet on, just touch its tip. to close, use the same gesture.

michaël harboun has sent us images of a prospective kitchen concept he has developed while studying at strate college designers. ‘the living kitchen’ addresses the future of our everyday objects, through new technologies. 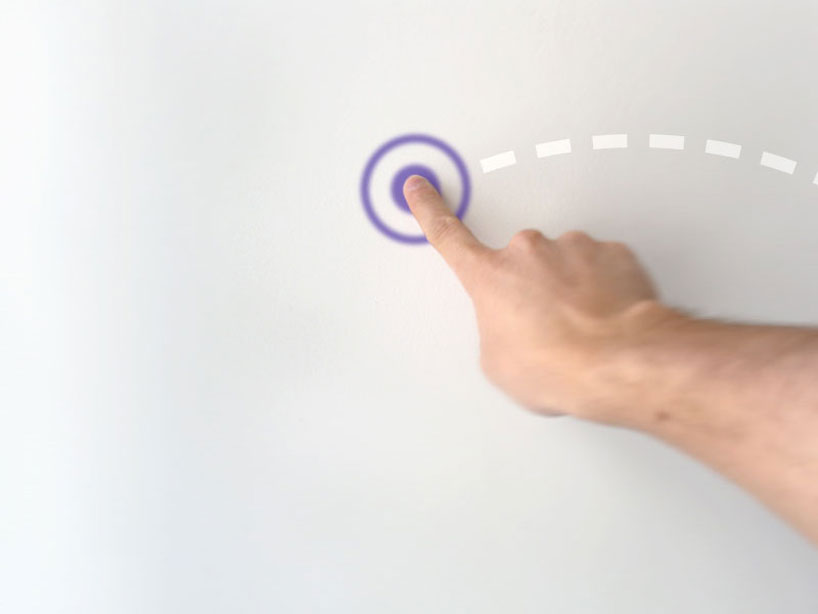 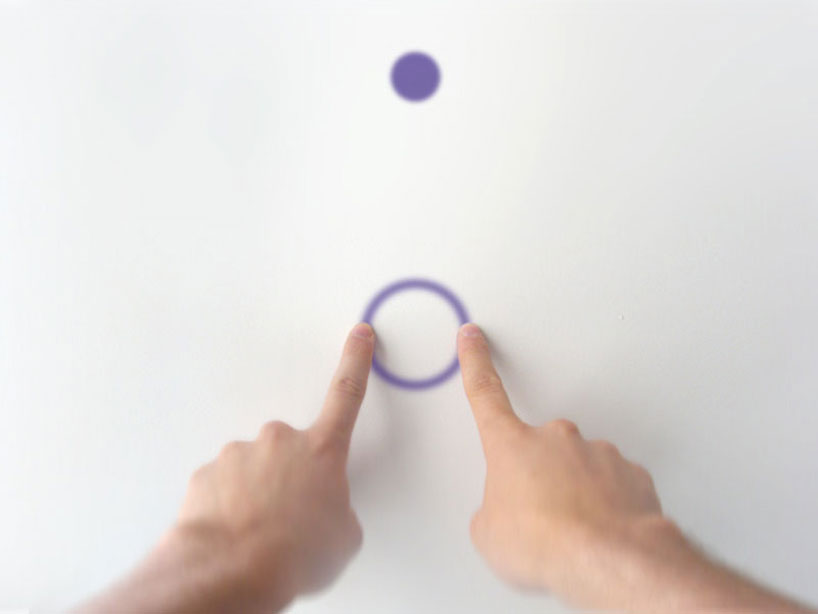 today, our environment is populated with physical devices containing digital information. harboun imagines a world where physical objects would gain digital abilities, meaning you could change the shape of any object as you would change say, the contents of your smartphone, altering our relationship with objects which would no longer induce a function by the way it looks. instead, the user himself would define the functions of an object, whereby the user becomes the creator. 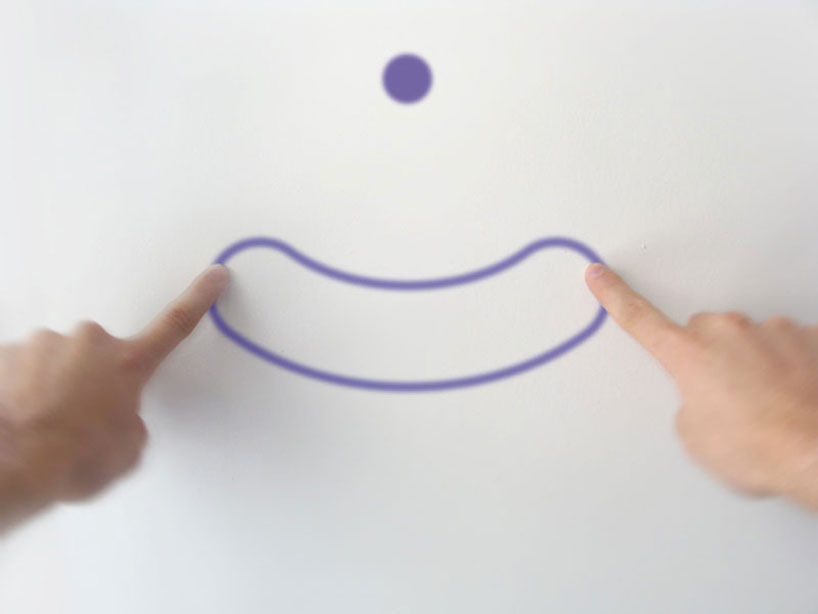 such a technology is currently being researched and developed at the carnegie mellon university under the name of ‘claytronics’. it is made from millions of small intelligent robots which are able to stick and communicate with each other. 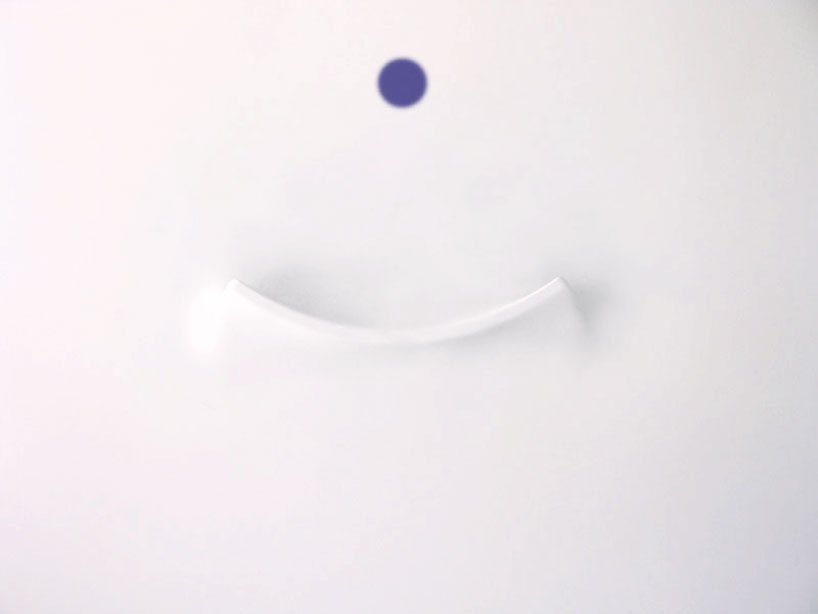 once manipulation is complete, the icon disappears and the shape of the sink begins to emerge

with the ‘the living kitchen’ concept, harboun tried to explore how people would interact with ‘claytronics’ within the living environment. the matter would be reactive to exterior stimuli. people would only have to touch the walls of the space in order to make faucets, sinks or cutting boards appear. volumes could be stretched, tested and bent according to the user’s needs. new shapes could be developed by drawing their silhouettes on the surfaces, which could be saved within a digital system and summoned back again. shapes could also be downloaded from a neighbour’s kitchen… or bought in specialized ‘shape-stores’, making the possibilities endless… 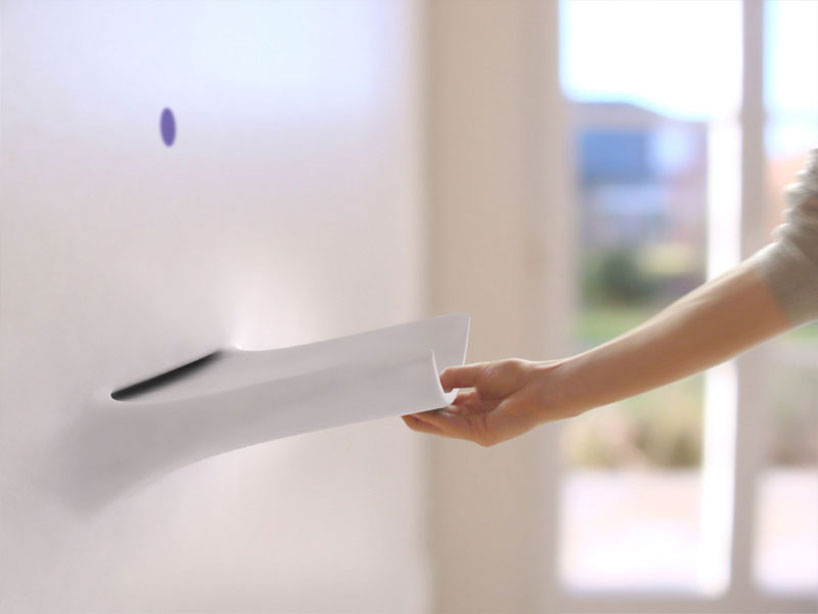 the relief can then be pulled from the wall to one’s desired depth. to make it disappear just push it into the wall.

what would that mean in the end for the designer? the designer would still hold a position as guarantor of quality. he would develop sophisticated forms in order to propose the best usages possible for his customer’s needs. he would also play an important role in the way the user interacts with the objects. 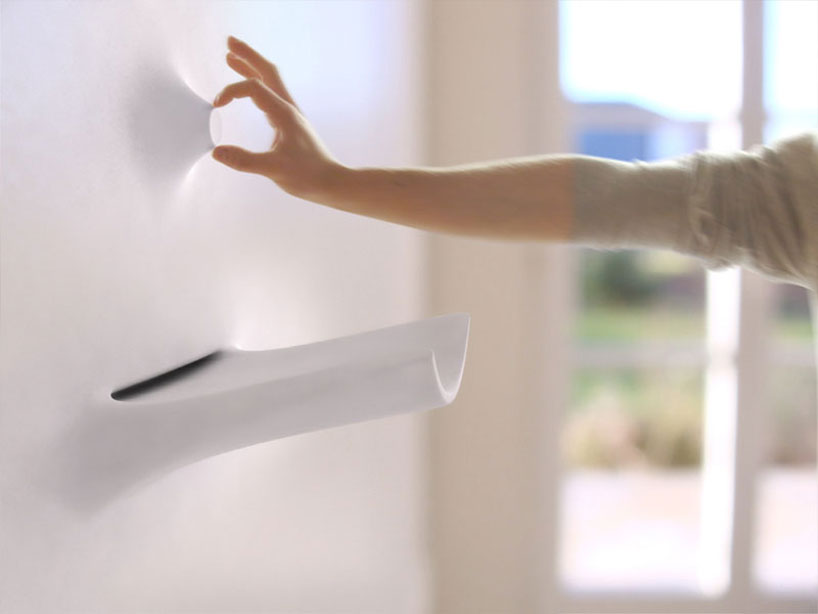 the faucet is made in the same way…

‘the living kitchen’ will be on show at the saint-étienne biennale internationale design 2010.

left: drawing a line on the wall is enough to bring out a working plan. right: then you set the depth. width can be changed at any time by stretching the horizontal volume. 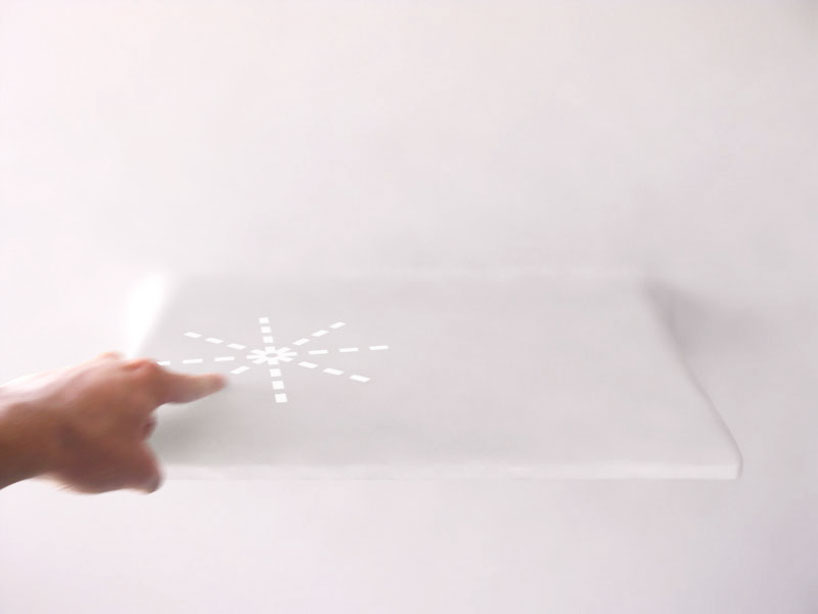 all forms of cutting can be drawn on the plan. they are then recorded and can be invoked at will. 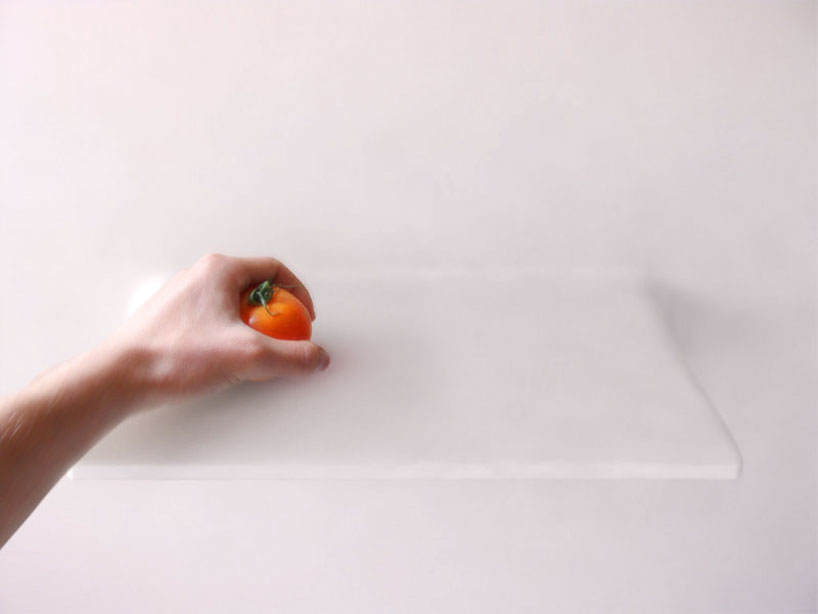 then on can place vegetables on the form, while keeping their hand resting on it. 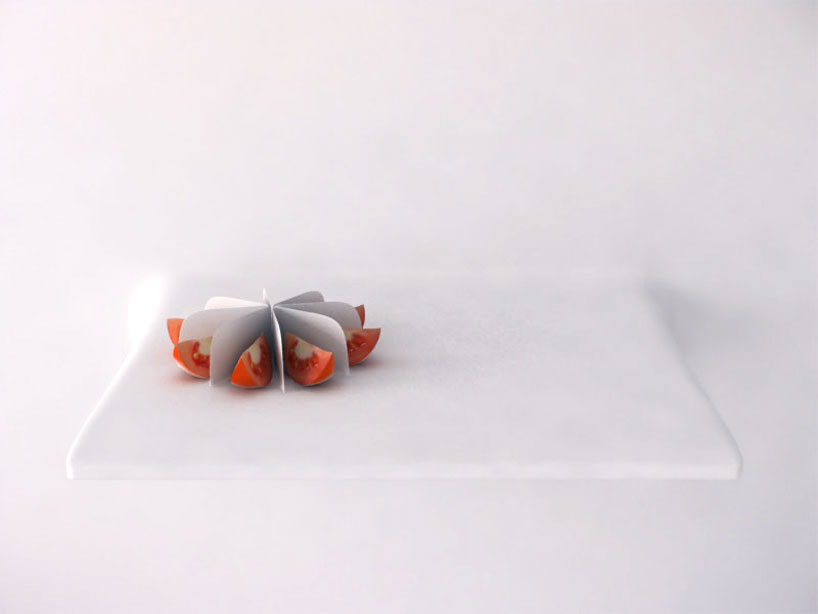 fine strips will then emerge and divide the vegetable. the speed of the blades will decrease gradually with the approach of the hand. 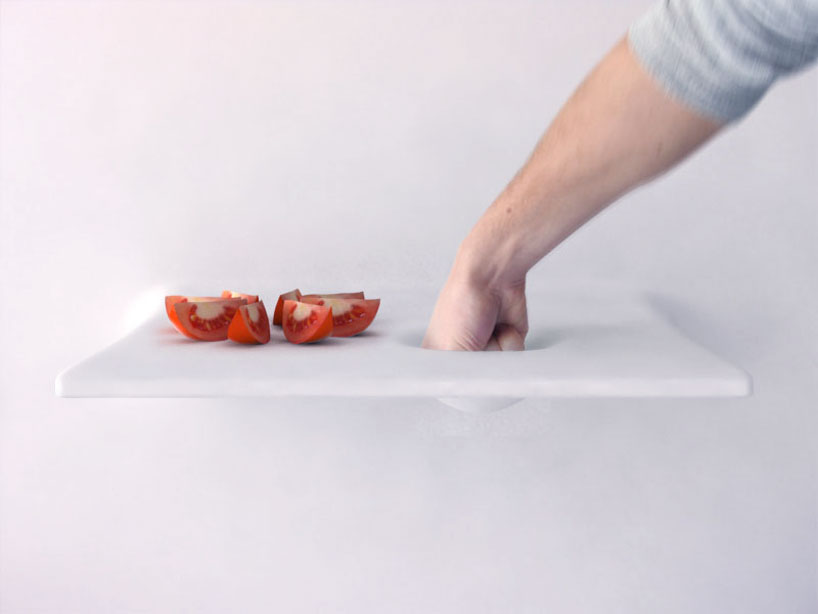 the work plan is malleable and can be distorted by any means for different functions. 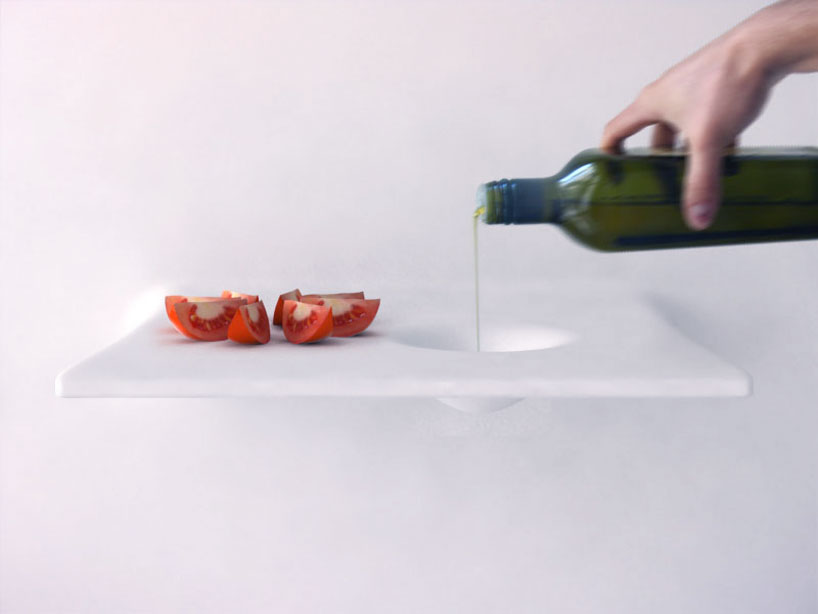 in its first phase, the cavity serves as a container for accompanying sauce / oil. the diameter and depth can be modified by stretching the volume. 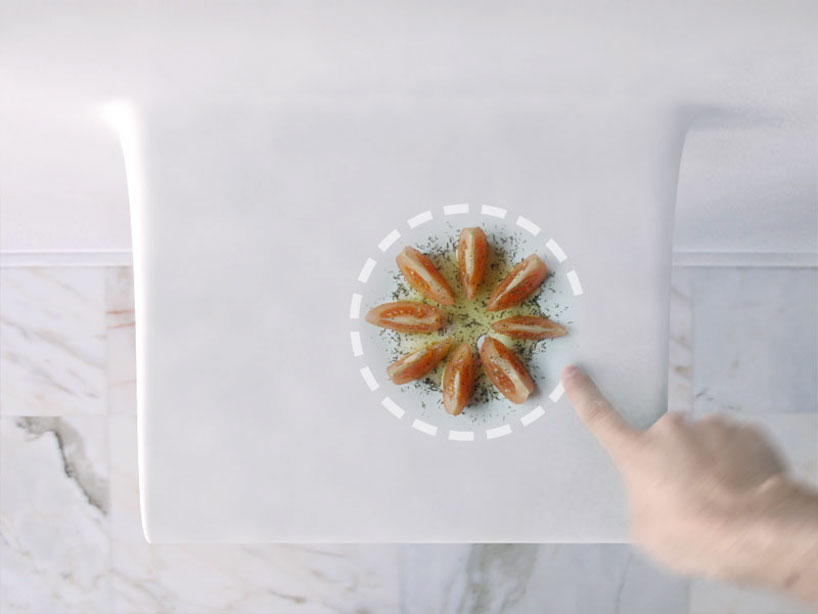 in the second phase, the depth of the container is reduced for serving purposes. the perimeter of the shape is retraced to recover its form.

Type text or a website address or translate a document.
Cancel 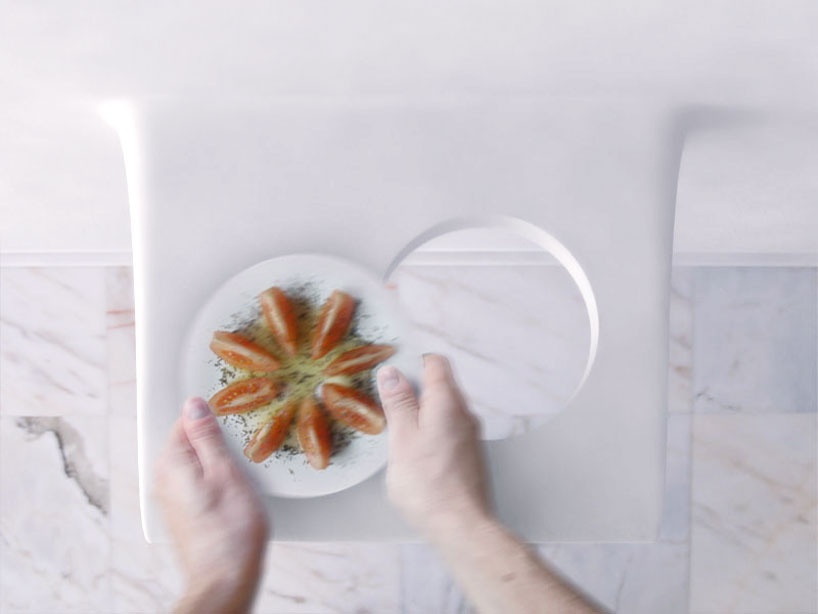 as ‘claytronics’ is a healing material, one will be able to fill holes or merge matter if the plate is replaced in its place.