paris-based studio mona kim projects has been involved in the development of window installations for japanese clothing brand uniqlo. the first was a simultaneous three global city art installation presented as part of uniqlo’s ‘heattech’ global campaign for the company’s new york, paris and london flagship stores. in a concerted effort to break out of the typical traditional approach to retail environments, mona kim proposed a bold and high-impact spatial experience that communicates the innovation of the product and that which implements a forward-thinking approach to visual merchandising. custom-made LED monitors were integrated into custom-made and treated aluminum frames with synchronized motion graphic video content. 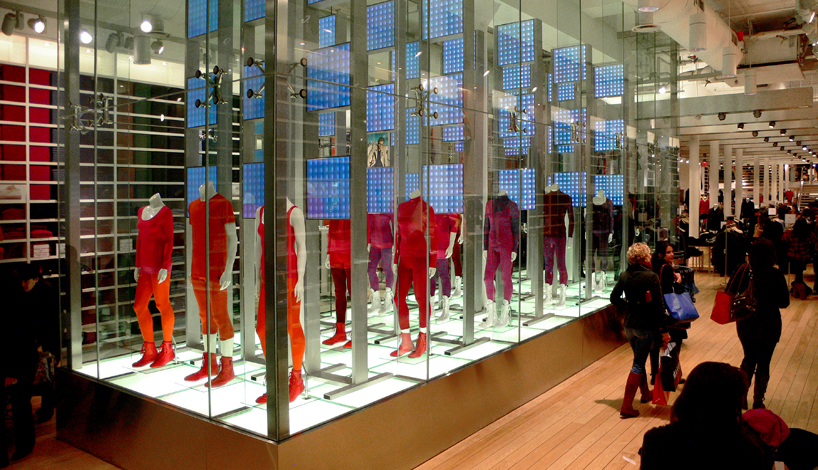 ‘heattech identity in 3D’ is the concept behind the project. it uses monolithic scale, symmetry, repetition, and synchronized video content to create visual impact and a connection to the product and the brand. conceived to have a consistent visual identity in the three cities, the installations combined media technology, motion graphics, and products, to shape a bold sensorial experience that resonated with the public. the overall design, selected technology and the media shown on the screens, created a dialogue with the interior architecture of the store, resulting in a tight seamless visual coherency.

this exemplifies the shifting trend within fashion brands to embrace technology in order to transform their spaces, and also to recognize its potentials in creating a general cross-platform branding effort. the new category ‘experience design’ is a testament that technology continues to open up new frontiers and applications, and that there is a higher demand for non-static, interactive and sensorial branding experiences available. 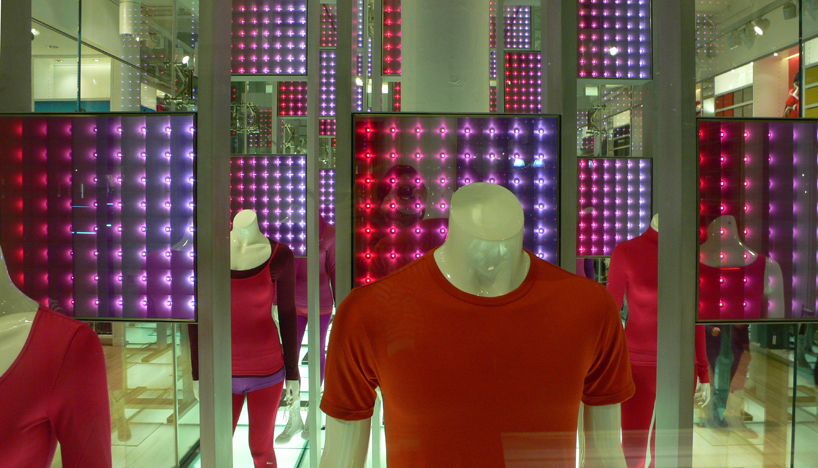 up close view of the display 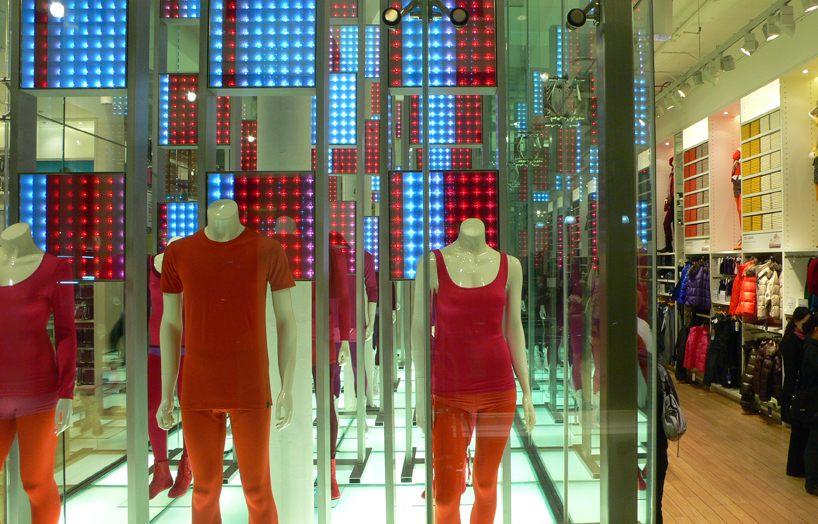 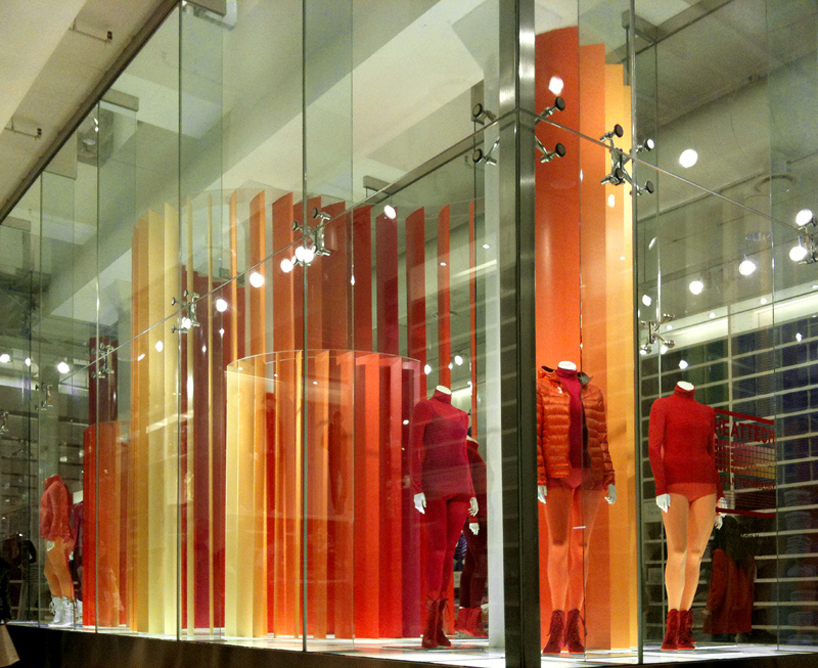 ‘aurora borealis’ was a large-scale branded art installation which was commissioned as part of uniqlo’s heattech campaign for their flagship store in new york.

the goal? to develop a high-impact installation that evokes ‘heat’ and ‘tech’ – the 2 key selling points of this product line. the creative response deliberately chose a ‘no-tech’ approach to express ‘high-tech’ in order to create an immersive and poetic intervention in the space through simple sculptural forms that emit a luminescent aura without relying on expensive lighting technology. with the ultimate goal to effectively communicate and transmit the feeling of one being immersed in ‘heat’, a series of 2 to 4-meter tall ‘fins’, with gradated color fields, were composed precisely throughout the store to create a singular monolithic fractal icon that changed and transformed according to the viewer’s point of view – a non-static static form. the combined visual results – kinetic energy captured in a frozen moment, a sense of light without light, a powerful visual magnet in the midst of the busiest retail street of new york soho. fabrication & installation was executed by new project llc. 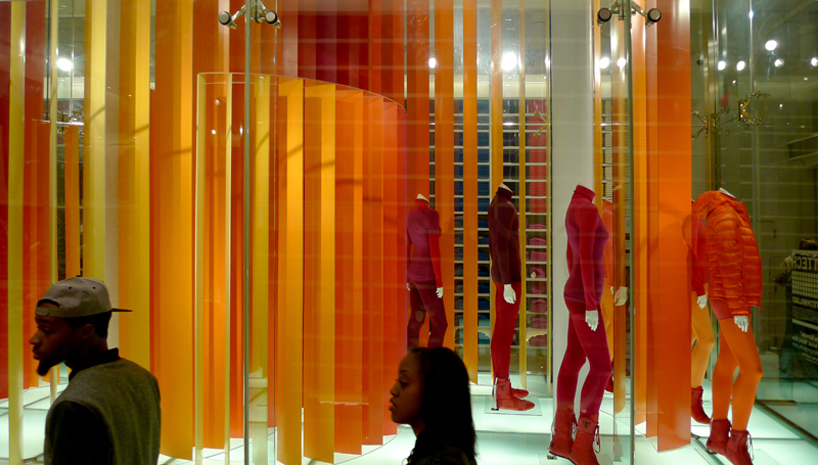 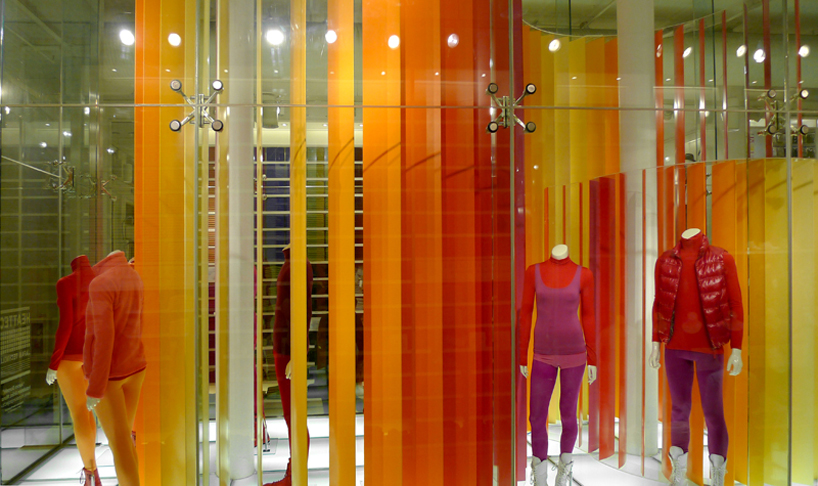 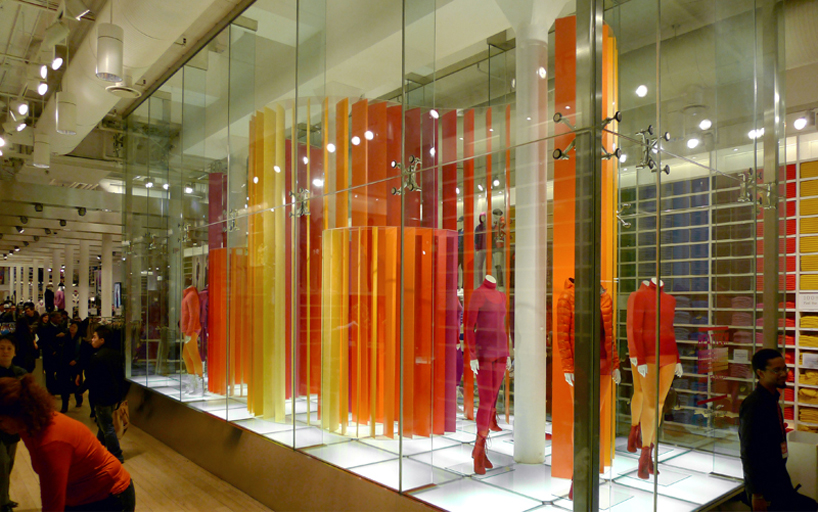 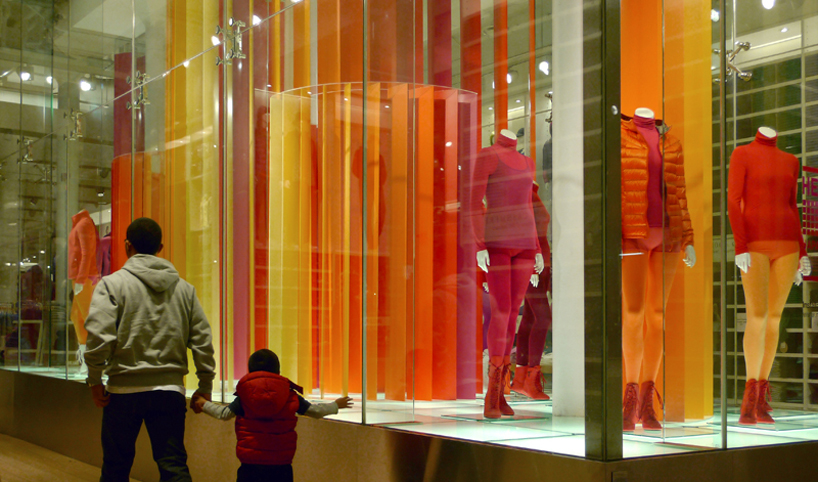 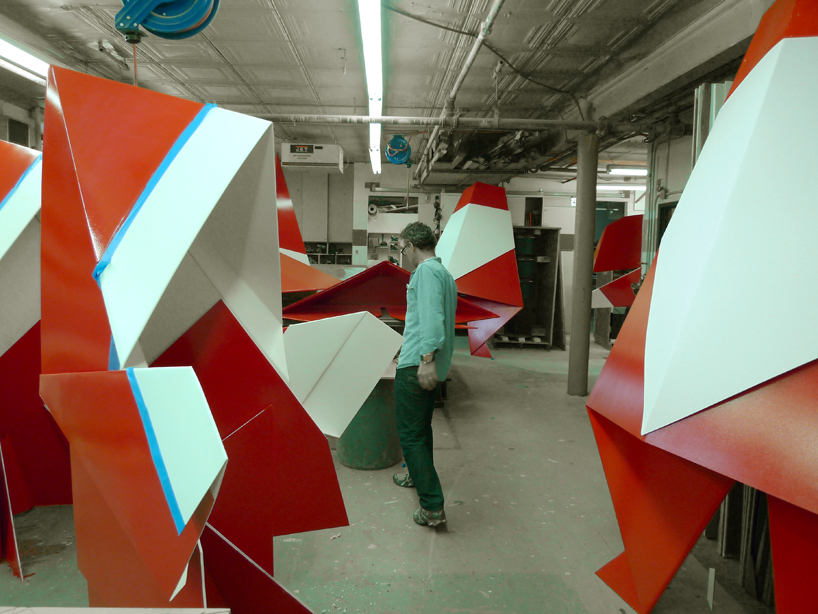 for uniqlo’s holiday environment, mona kim’s creative challenge was to find a new approach to express the season – the time of the year with such high commercial pressure – without compromising the edgy techno-human soul of the brand. how can familiar symbols be rendered in a fresh and contemporary manner? a slightly dark sense of humor seemed to be the answer: taking a banal icon – santa – and giving him a twist… a little of bit ‘kowaii’ (‘scary’ in japanese) and a little bit of ‘kawaii’ (‘cute’ in japanese) at the same time. the end result was ‘XXL space invader origami santas’ a bizarre hybrid between a santa and a space invader. referencing these qualities so characteristic of japanese mangas was one way to bring in the pop factor to the good (but over-used) santa and staying true to the ‘no-nonsense / rigorous / quirky / humanoid / off’ spirit of the brand’s visual approach. the process involved researching origami forms that exist in the world, then making concerted choices that would be most brand-appropriate. the exciting and challenging part of the project was the research and development phase to find ways to adapt the forms to be buildable at a super scale of 3-4 meters (10-13 ft.) in a seamless manner, which would impact the space in a powerful manner. based on original origami santa forms by: brian k. webb, edwin corrie, and noriko nagata. fabrication and installation were done by new project llc. 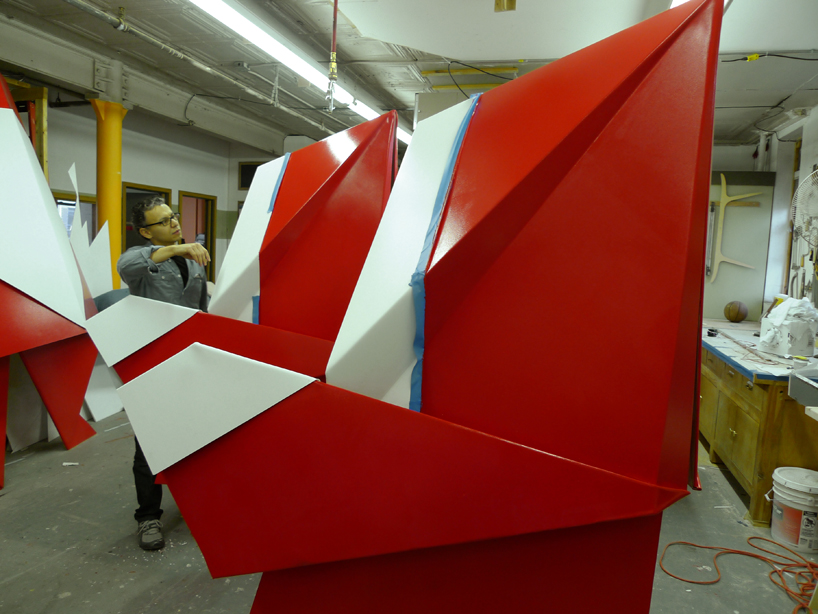 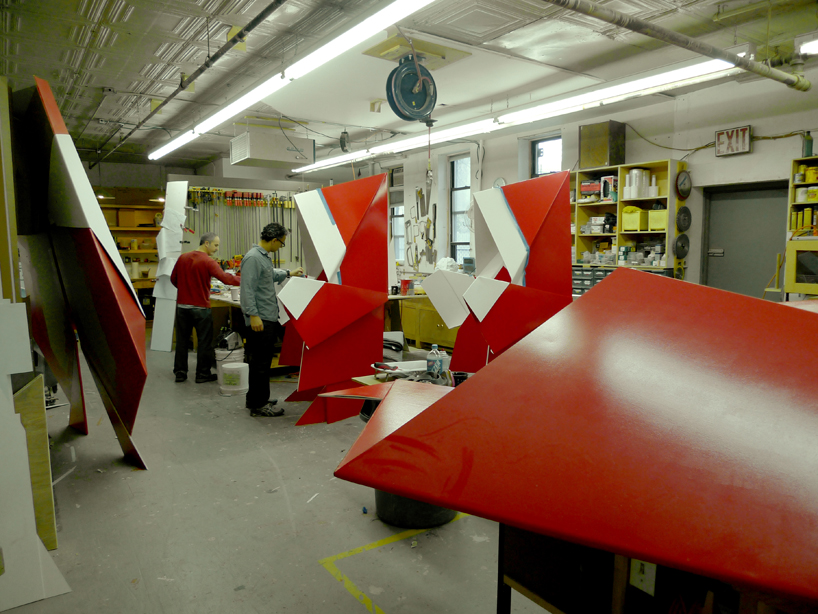 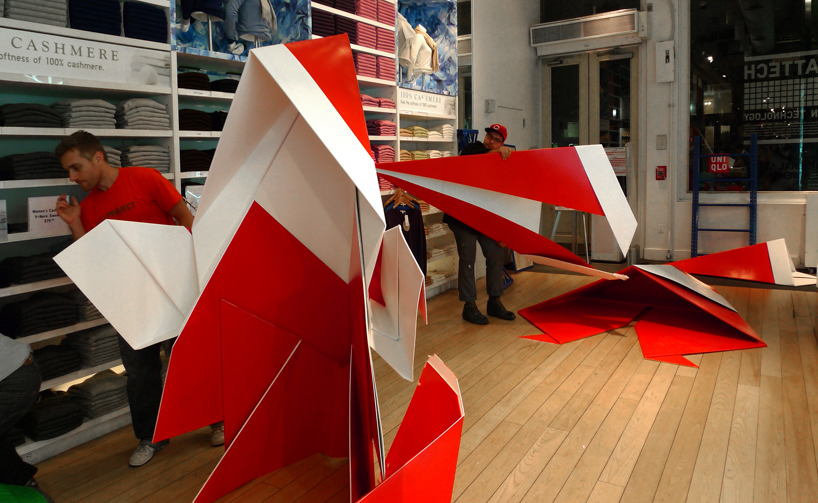 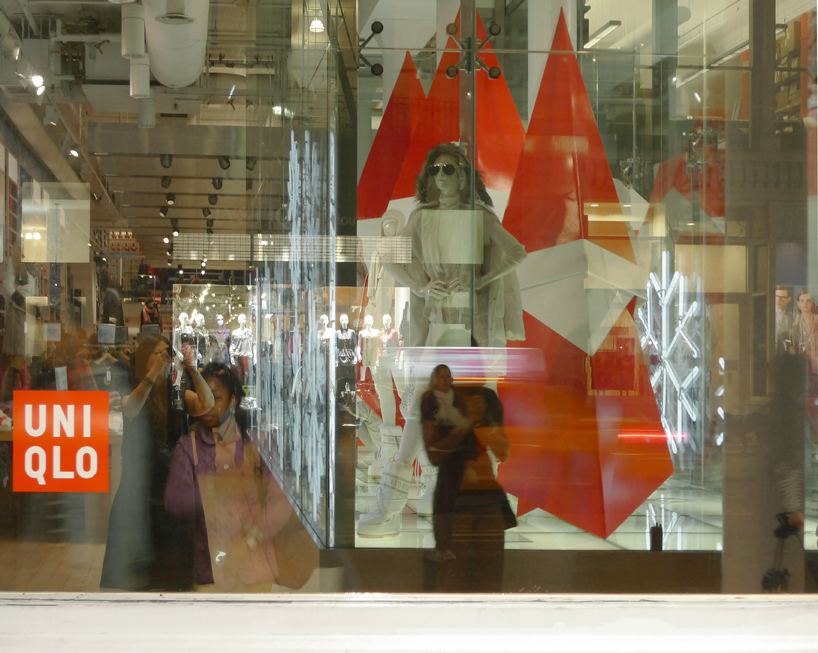 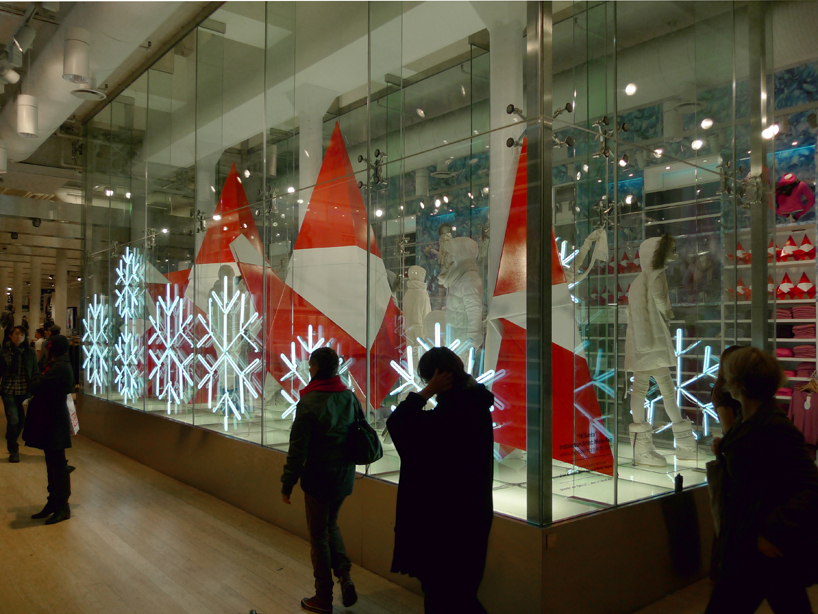 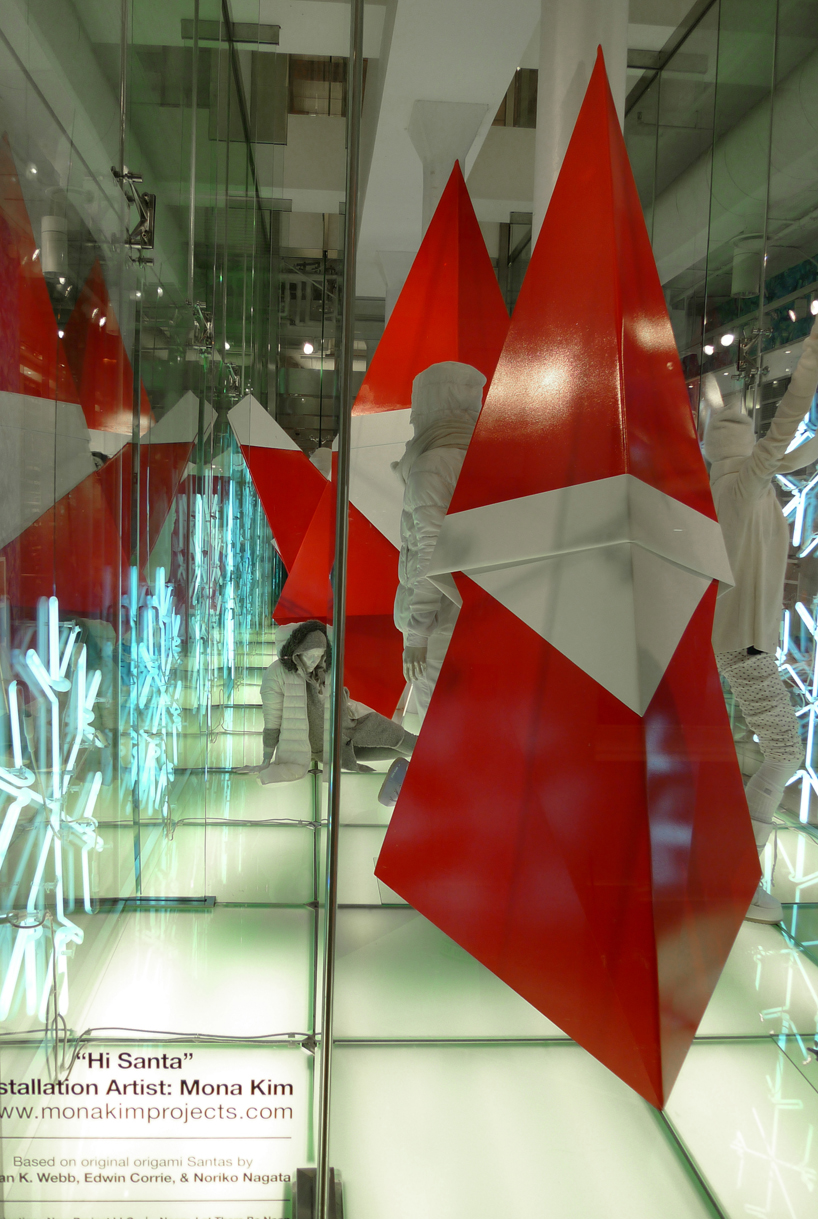 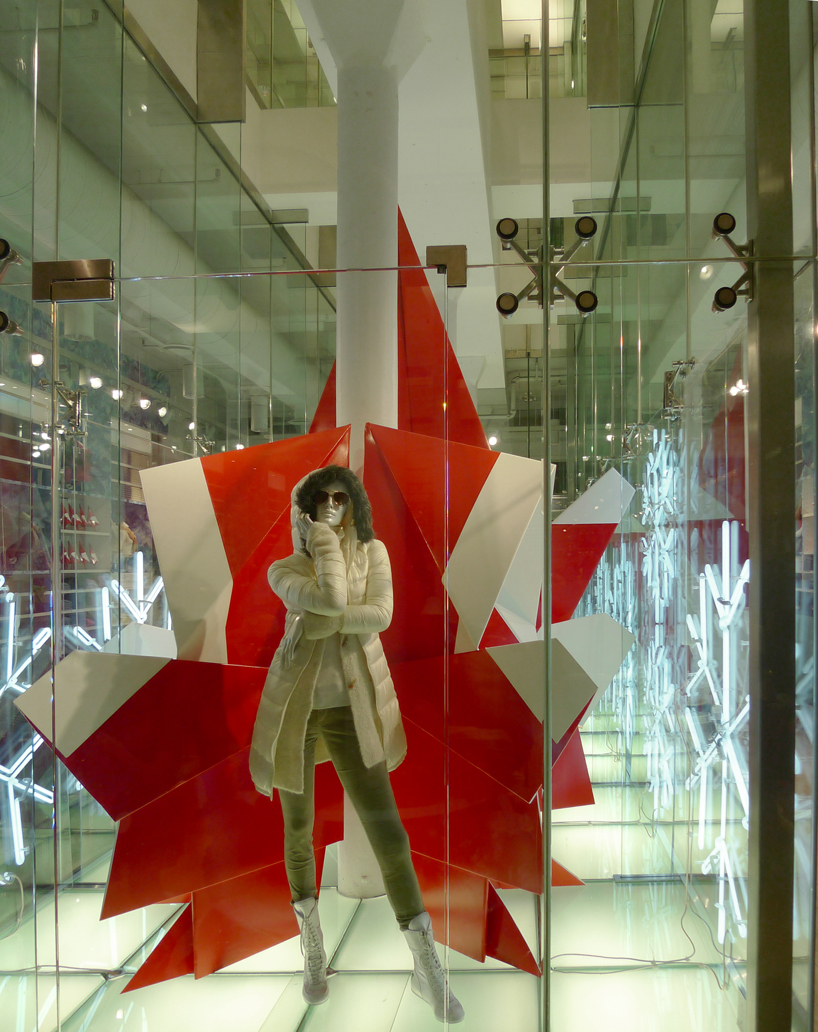 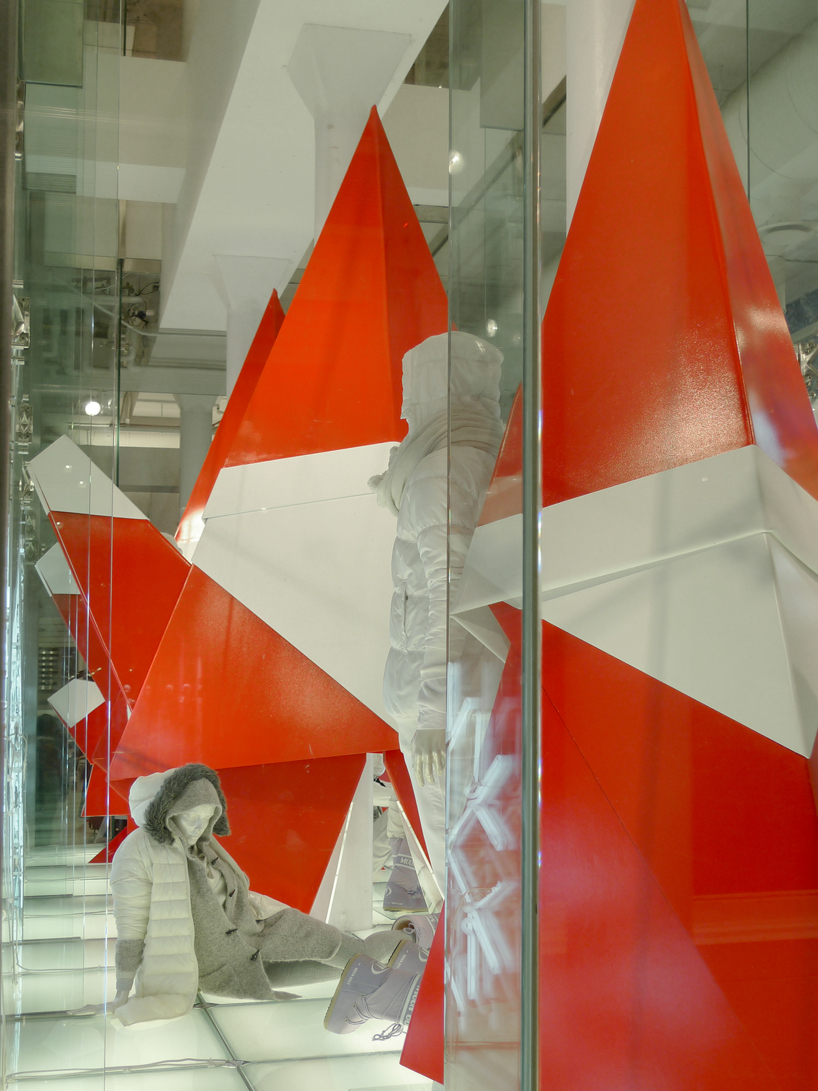