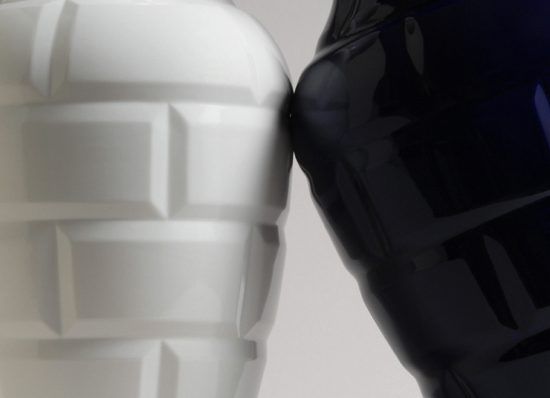 ‘firstly the concept for vase metro is about a complete contrast between the porcelaine object with the highest level of the craftsmanship and tiles as surfacing material for buildings. I created a space of which atmosphere allows people to naturally feel this concept behind. I used beige colour for walls which symbolizes the most common surface character of french city views. on these two beige walls I placed sign boards which once again illustrate the most commonly known typology at metro stations in paris. so I created this space which speaks of such contrasts as in its concept by having this space with the object.‘ NF ‘vase métro’ is being shown at design parade 05 international design festival (july 2nd to 4th, 2010) in hyères, france as part of the ‘design and craft’ exhibition held within the villa noailles. the show which runs until september 26th, 2010 is accompanied by a lecture presented by naoto fukaswa on july 3rd, 2010, entitled ‘in the shade II’.