new york city football club is a newly formed professional football team based in new york that will compete in the major soccer league. alfalfa studio‘s founder rafael esquer kindly gave designboom a look at the process involved in designing the club’s badge.

as a proud new yorker, I was determined to represent new york city as a strong, bold, collaborative community deeply rooted in and proud of its history. our intention was to position the NYCFC’s badge as a genuine, authentic and timeless football badge—very NYC and, at the same time, with a presence to stand on its own in an international context. right from the outse we knew we wanted to placed emphasis on four key qualities: simplicity, legibility, memorability, and timelessness. 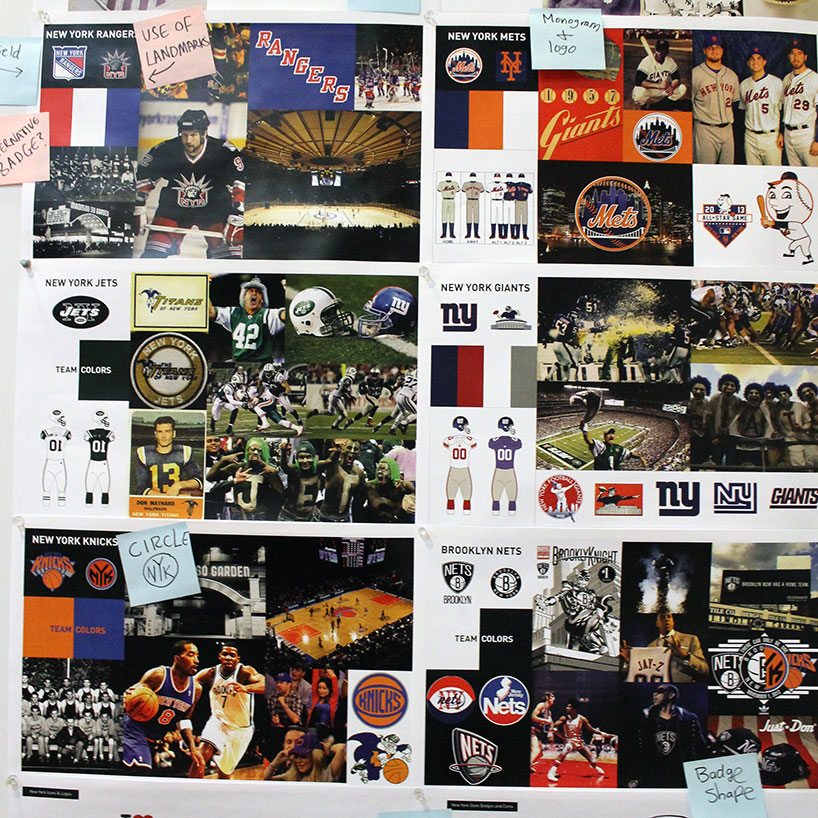 inspiration for our NYC badge came from the rich graphic vocabulary that is so much a part of the boroughs of new york. urban landmarks such as subway stations, theater marquees, industrial sites, and old store signage evoke the everyday life of the city. and urban artifacts such as manhole covers, the classic subway token, architectural details, vernacular typography, and historic photos and advertisements echo its rhythms. 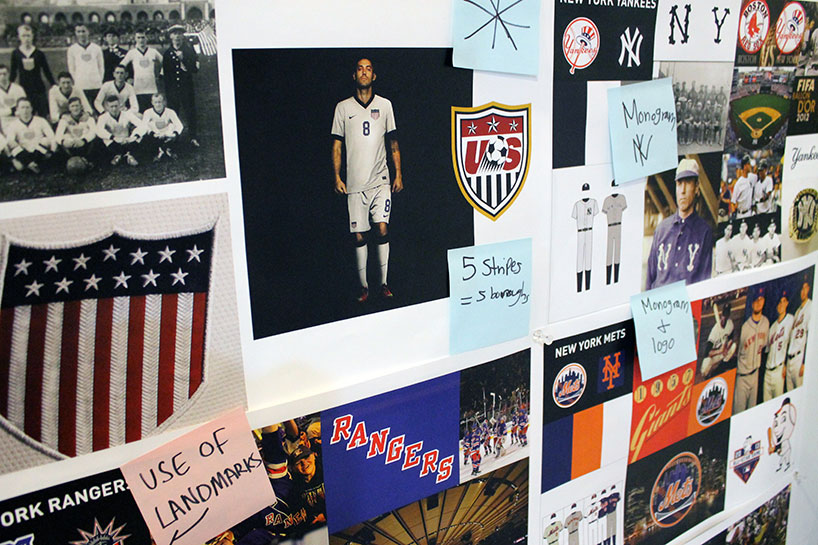 research – other new york sports teams and the US football team

our research included the study of new york city symbols, landmarks and competitive sports teams. we studied heraldry, badges, coat of arms, new york city history—starting with the native american cultures that lived in new york city for millennia—and the universal meaning of symbols. since it was very important that the NYCFC badge stood on its own in international contexts as a genuine, authentic, and timeless football badge, we also looked at badges from around the world. 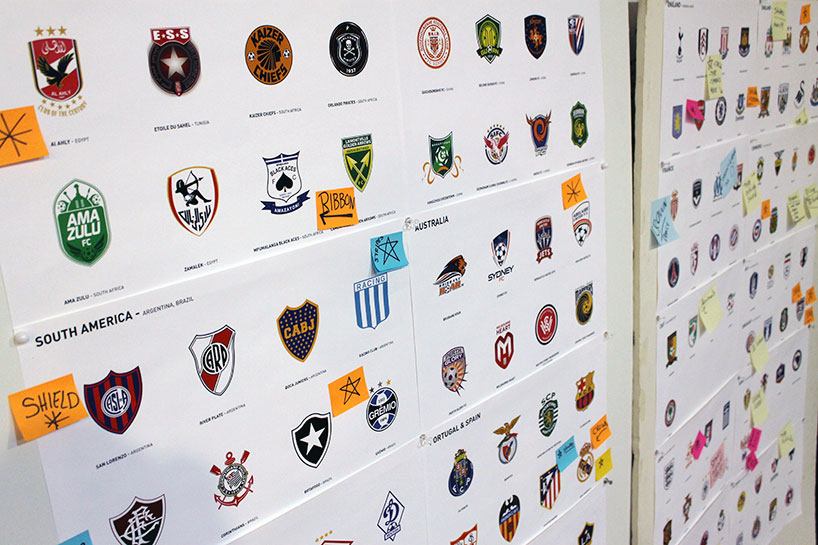 research – football crests and badges from around the world

we paid special attention to the design of a fresh and unique monogram. conceptually, the intertwining of the N, Y and C alludes to teamwork, strategy, harmony, and unity. the letterforms were custom-drawn to achieve the necessary level of geometry and balance. we focused on every detail, proportions, and the actual and perceived relationships between each of the elements used. 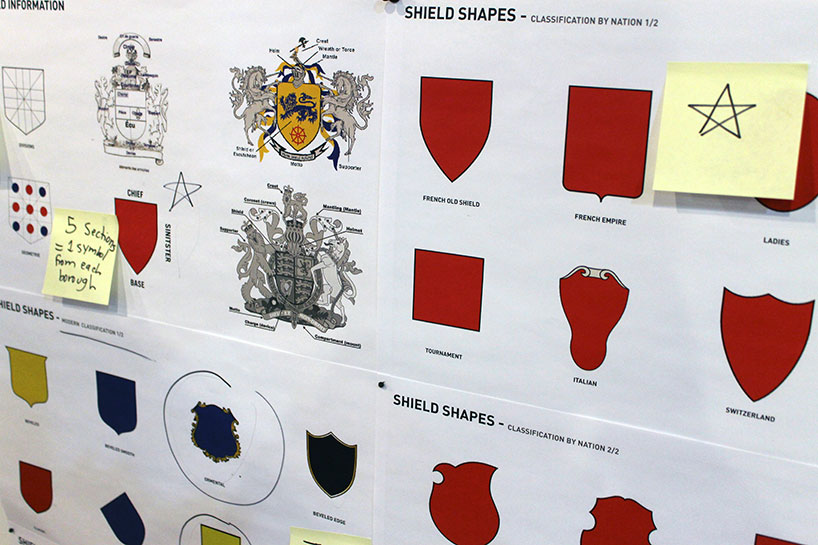 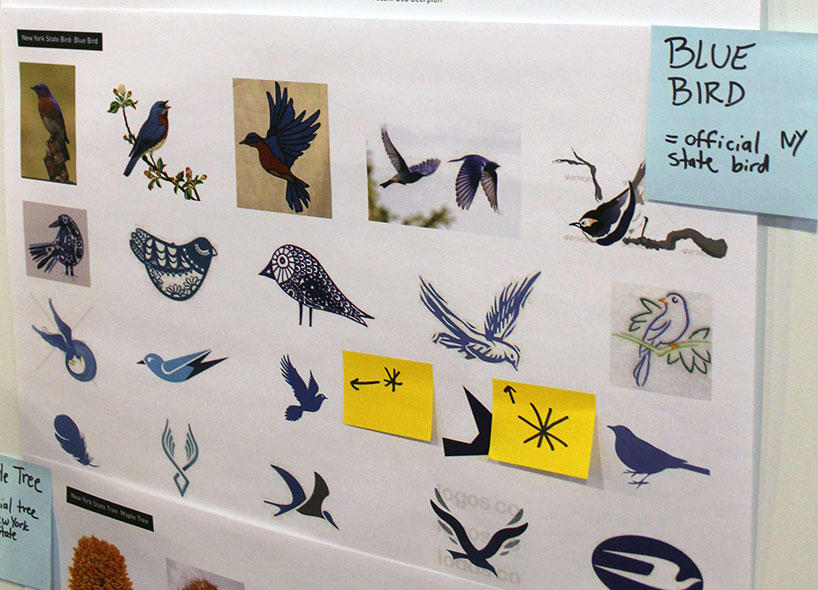 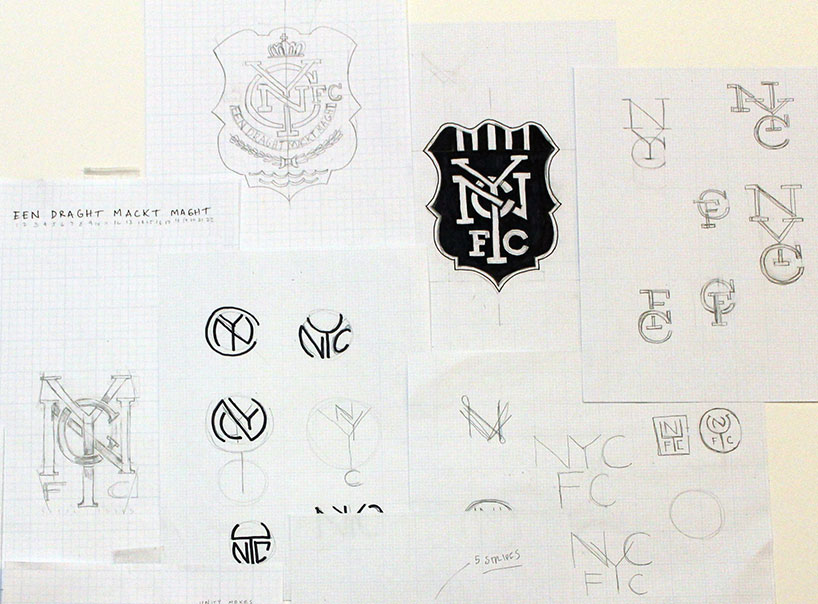 when thinking of new york city, most people equate it with manhattan but this long, narrow island is only one of the city’s boroughs. it was imperative that the NYCFC badge represented all five boroughs, devoid of any hierarchy. the client’s directive was clear: five boroughs, one city. in addition, while exuding a definite NYC character, the badge had to have the presence to stand on its own in international contexts. 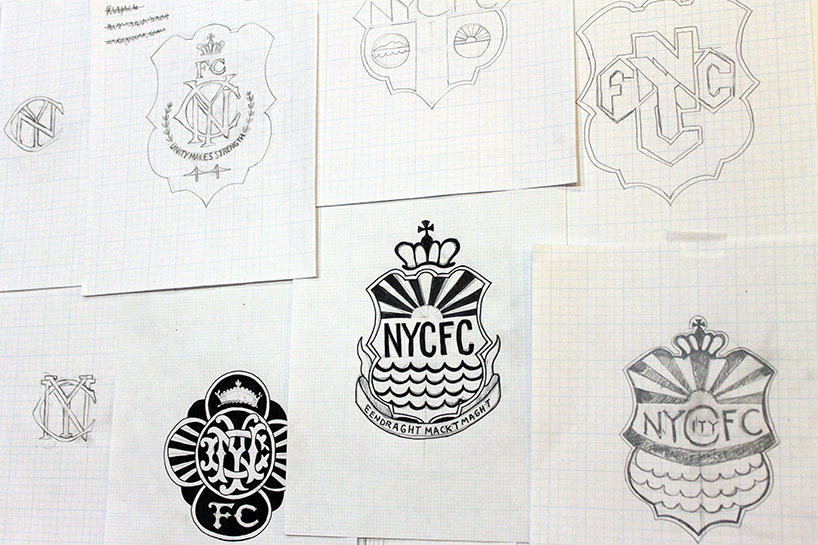 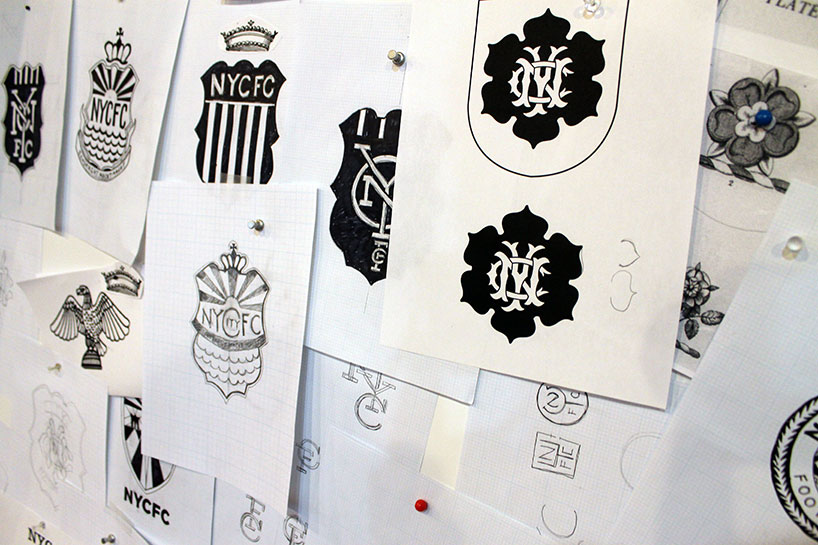 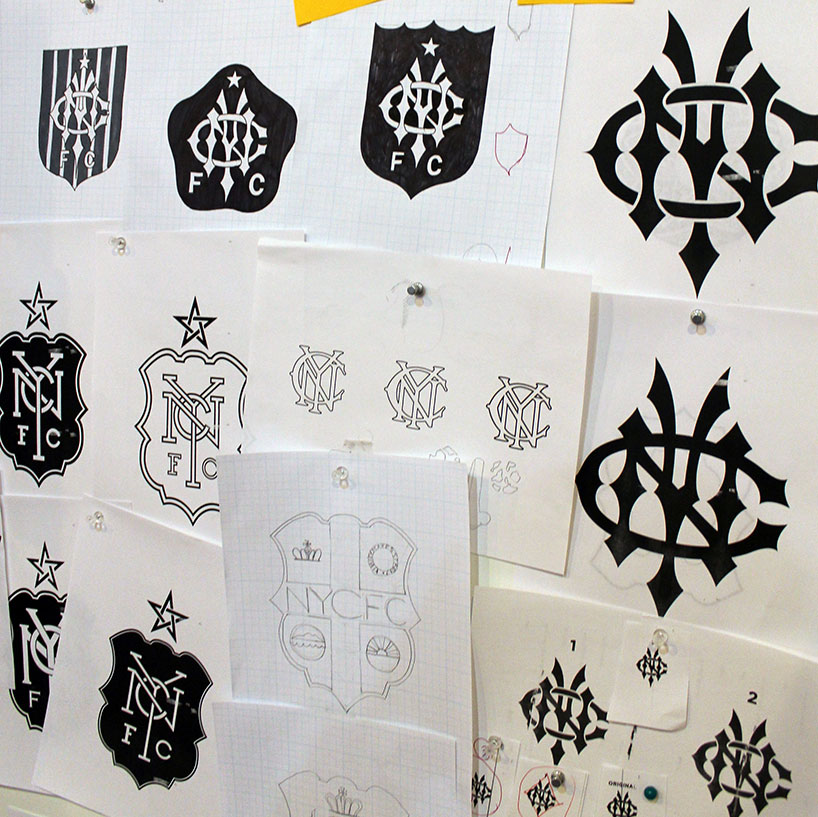 lastly, NYCFC now has a badge, but only its sporting director and head coach have been identified, no players yet! winning fans—the heart and soul of any sports team—solely on the promise of success was no small feat, particularly when competing for loyalty against teams with long legacies. 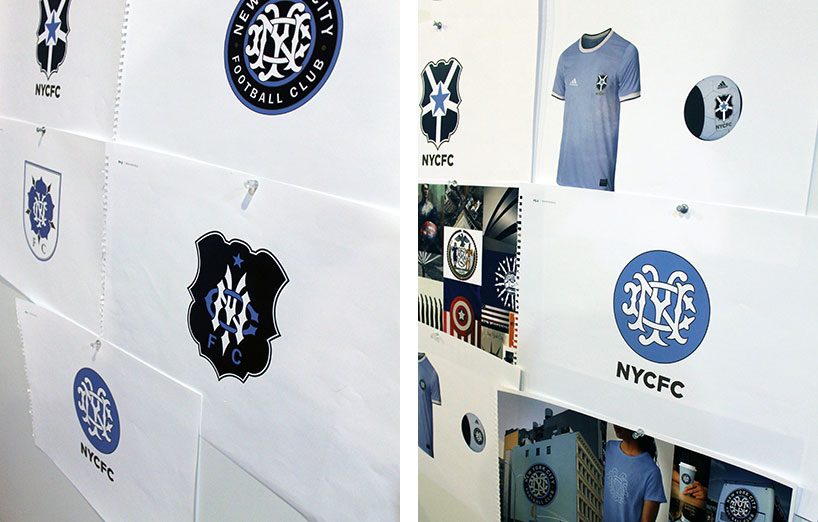 from two potential badges—both designed by alfalfa studio—fans cast their vote and selected the definitive one in an online, public poll. over the course of four days, more than 100,000 votes were cast, deciding the badge that has now become the bedrock of the club’s identity and a focal point of all team gear and merchandise.

the final badge presents a timeless monogram inside of a circle. the shape is inspired by the old new york city subway token, created by the transit authority in 1953 and used for 50 years as the standard fare for a ride. the last version of the token had a cut out pentagon in the center representing the five boroughs, similar to what appears on either side of the monogram, to reinforce the club’s connection to entire city. the circle is also a symbol of unity, wholeness and infinity, and is often associated with potential and the number one. this is a modern and confident badge that clearly speaks to new york city’s status as a leading city.

the badge features the typeface gotham by hoefler & frere-jones – a wholly american font inspired by the city’s signage and in-depth study of building lettering in new york city, the monogram reflects the rich graphic language that is so much a signature of the five boroughs. we synthesized a fresh graphic style that we then integrated within a circle. together, they evoke a powerful new york city ‘seal of quality’—a badge intended to be worn with honor and pride. the colors navy blue, white and orange are drawn from the new york city flag, while the light blue refers to the club’s family lineage – manchester city FC.

‘given the significance of a club’s badge and what it means for a team’s identity, it was important for us to have our fans included from the beginning—a commitment that we’ve made from the start. thanks to the voice of our fans, we feel that we have a design that truly represents our club and our city.’– claudio reyna, sporting director of new york city FC 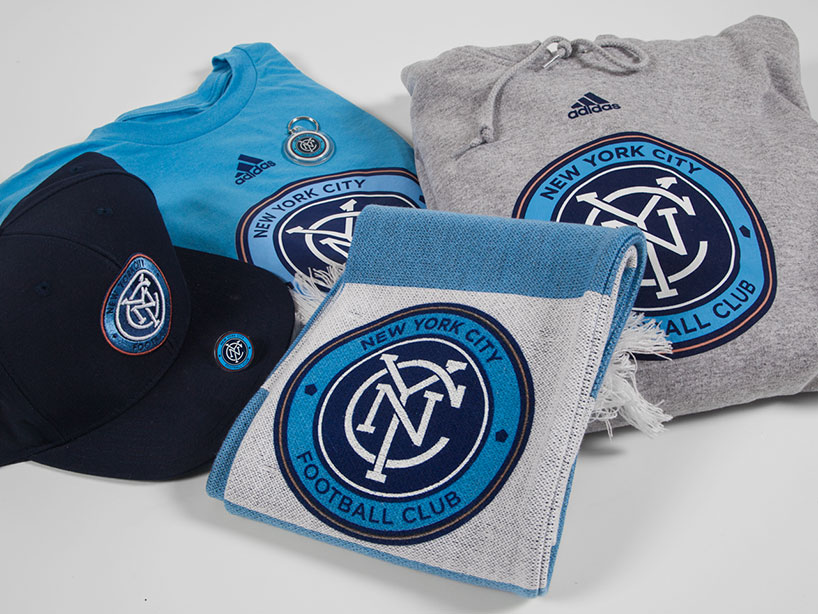 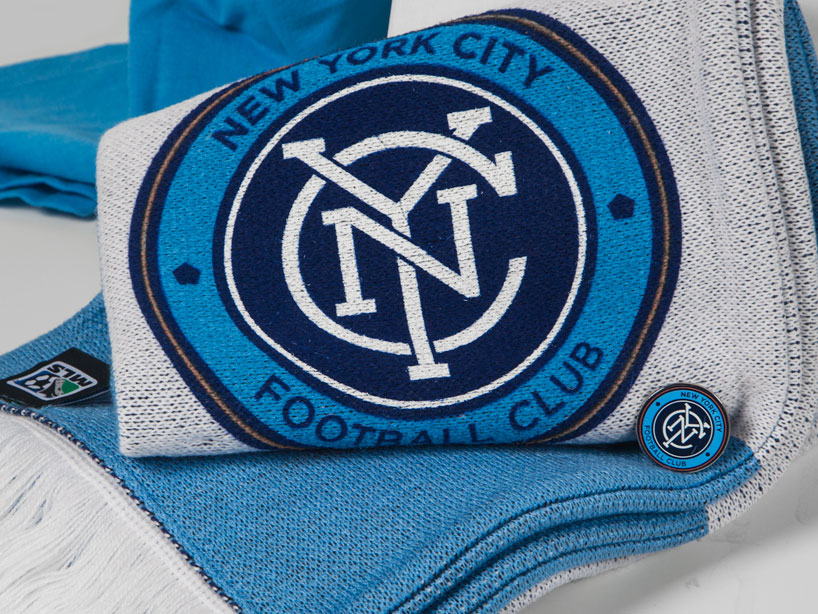 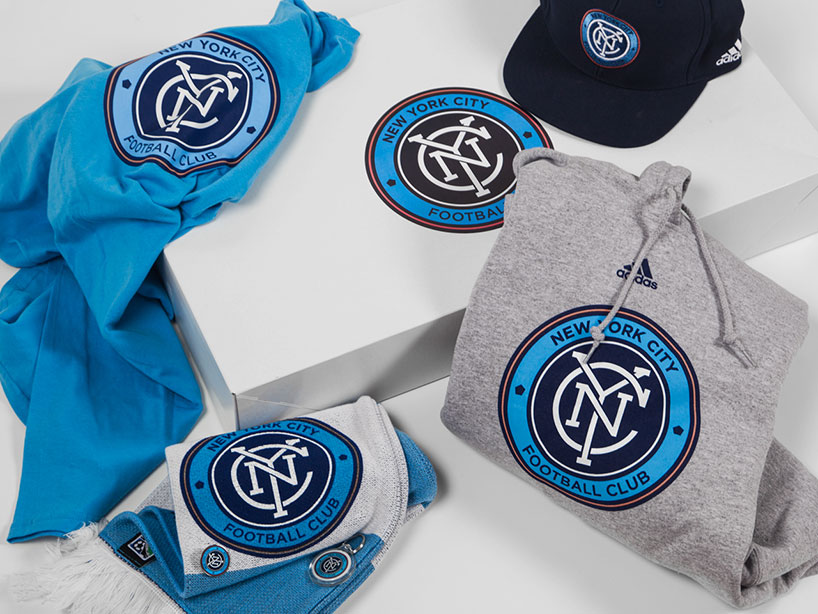 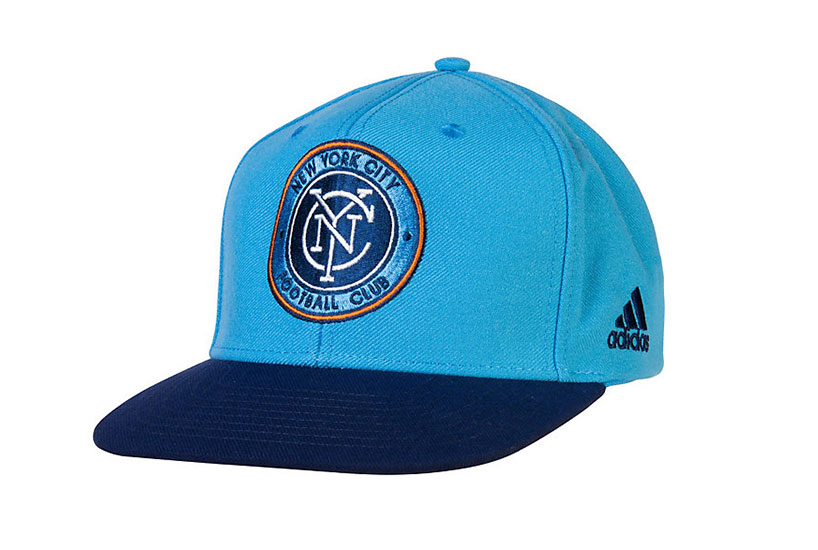 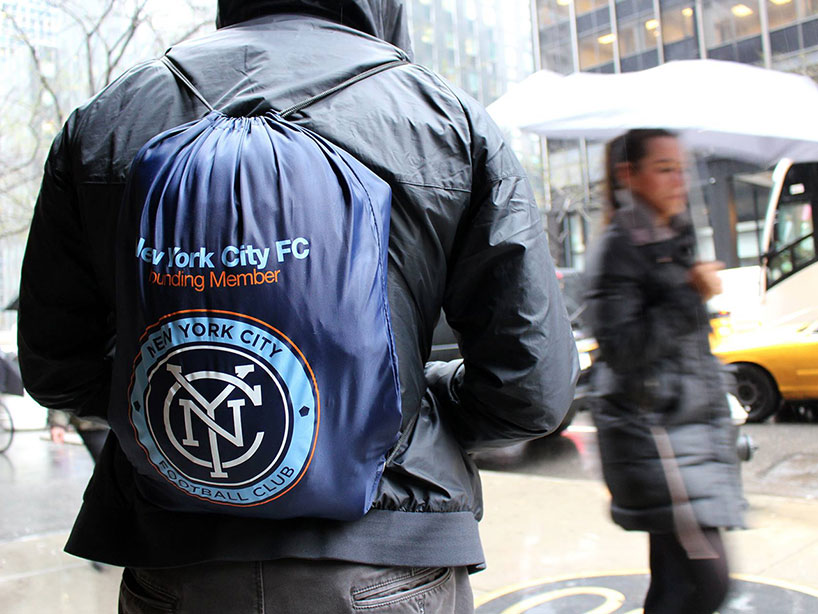 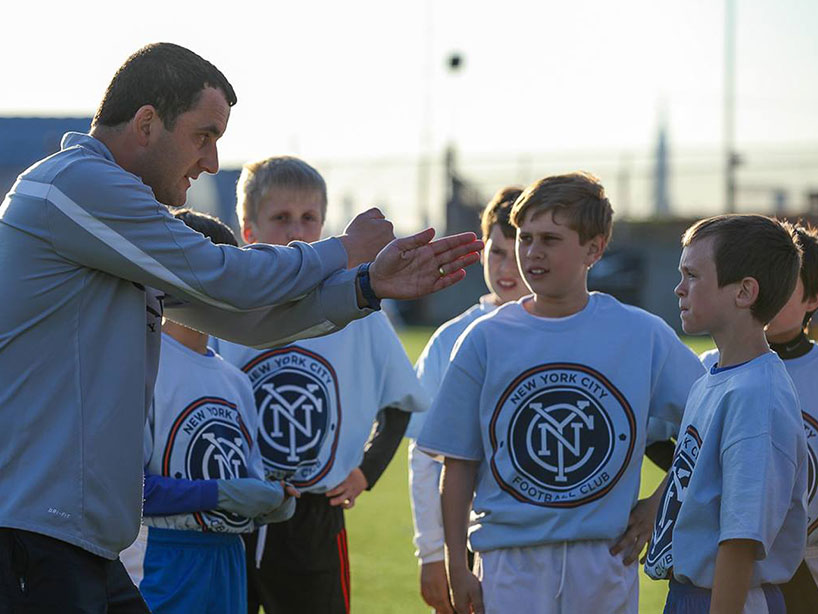 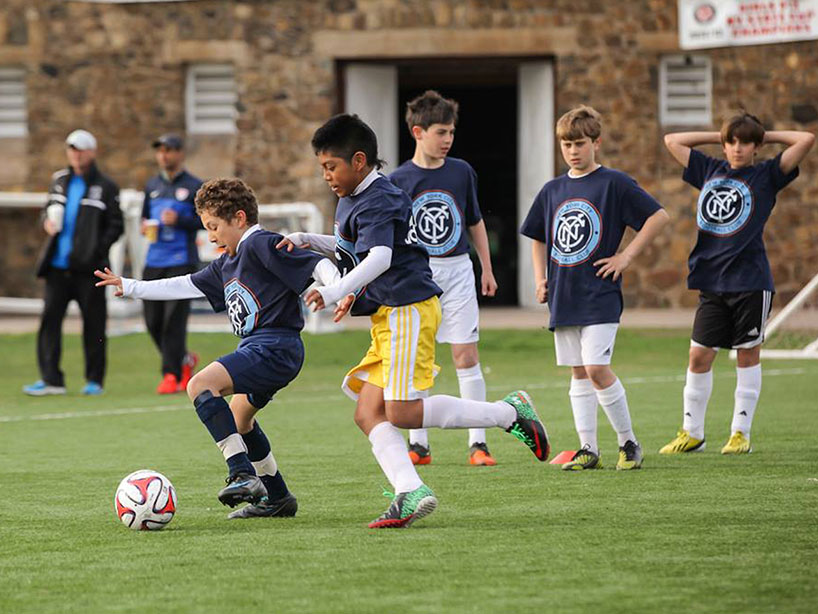 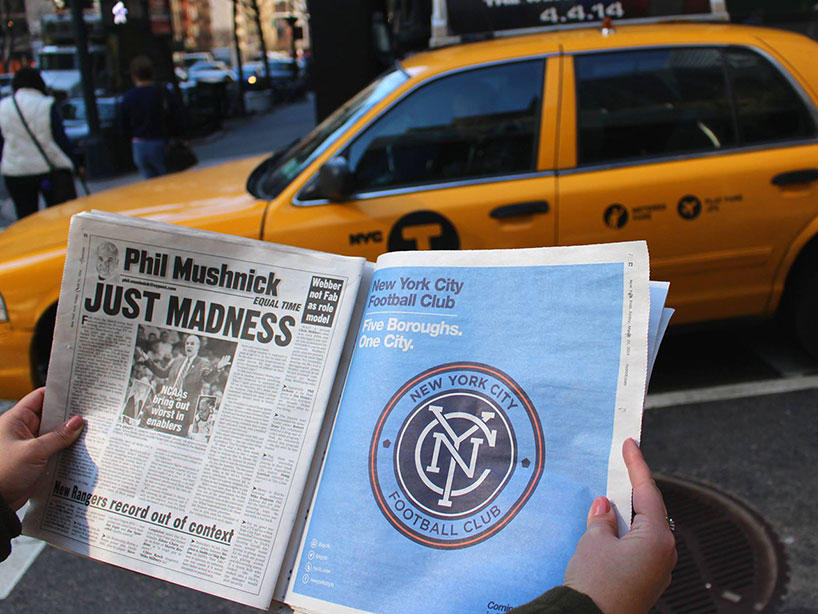 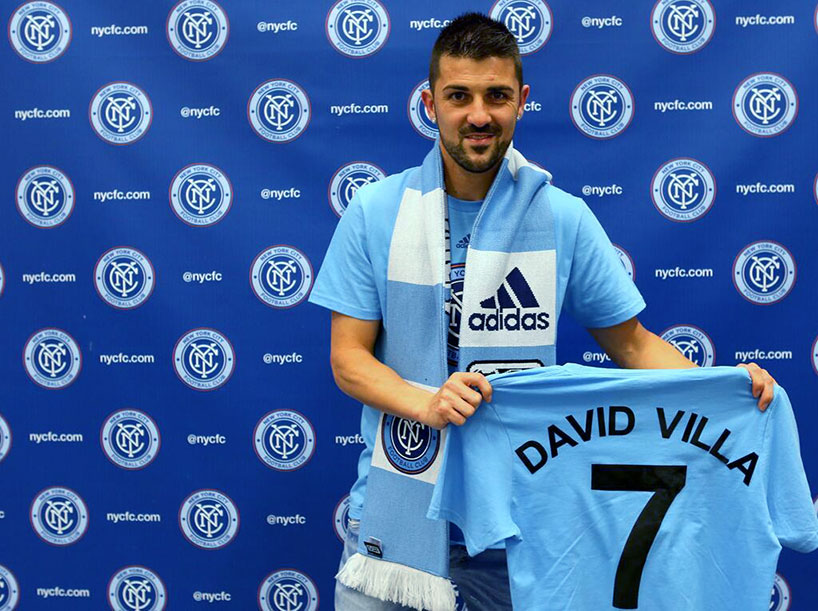 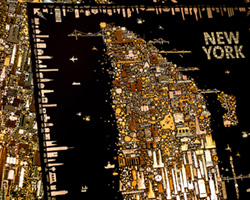 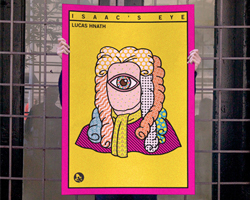 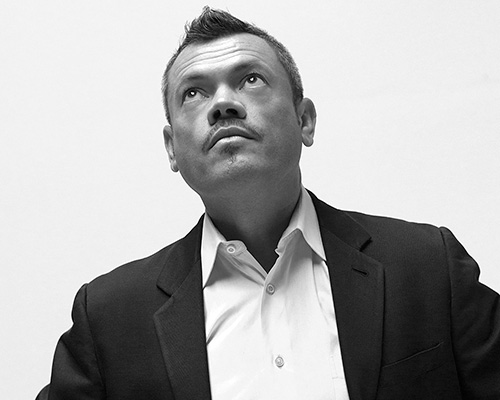