in advance of the highly-anticipated NIKE AIR VaporMax release on march 26, NIKElab has worked with a new generation of designers to explore the concept of ‘walking on air’ through a series of interpretive costumes. the project ‘experiments in style’ has seen a curated selection of young creatives from around the world embody aspects of the AIR VaporMax through experimental garments set in motion. 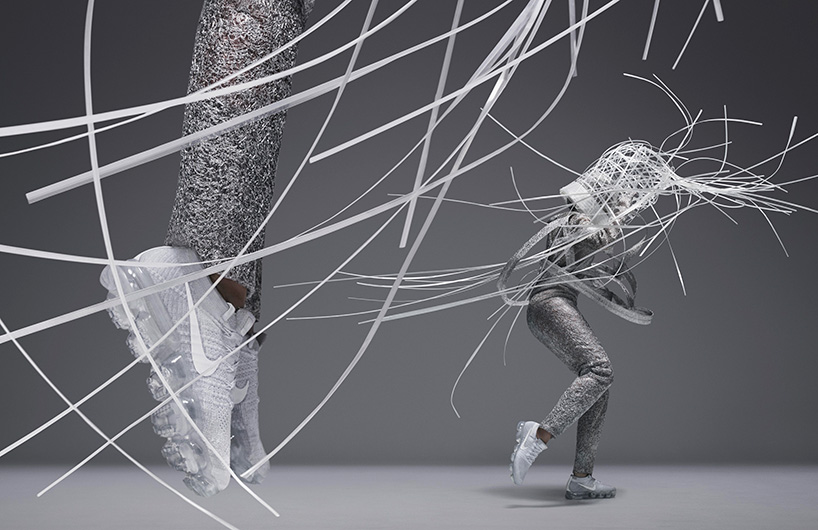 NIKE tapped stavros karelis, founder of london retail destination MACHINE-A, to curate a group of five emerging designers for the project. azar rajabi, liam johnson, paula canovas, shizhe he, wanbing huang, and shizhe he have each contributed their ideas on the theme, interpreting NIKE AIR VaporMax through an experimental and innovative fashion-tinted lens. see each of the five creations, and insights from the designers, below. 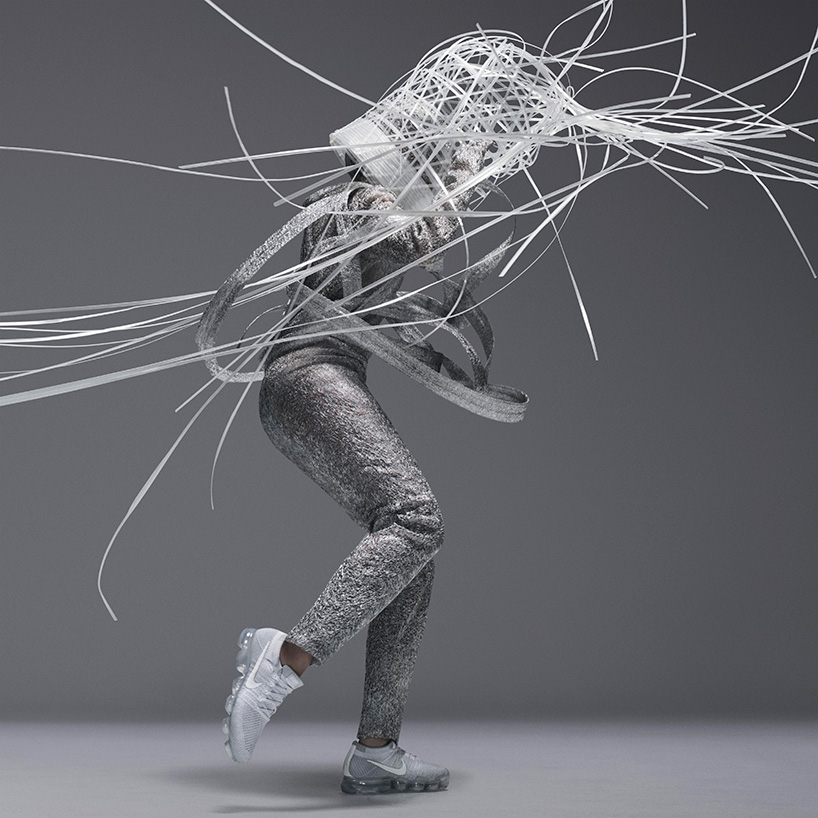 the material has been seamlessly molded around the body using heat

wanbing huang, a student from london’s central saint martins, evoked a sense of movement through a structural fishbone element that wraps around the body.

‘the first idea came to life as an ode to all things airborne, with the lightness and flexibility of the NIKE VaporMax providing a direct reference,’ wanbing huang describes. ‘the transparent air cushioning unit that acts as a standalone outsole inspired me to create a flawless outfit that creates a harmony between body and environment. the idea is reinforced with a headpiece that was carefully woven, allowing a variety of shapes presented through emotions to slowly build a picture of texture and motion.’ 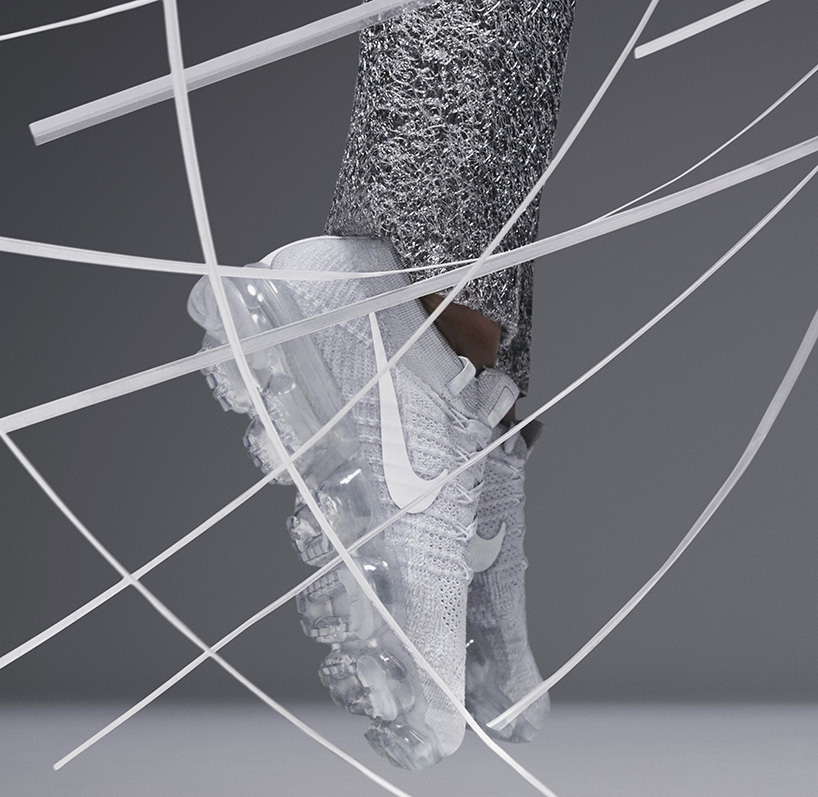 also from central saint martins is designer paula canovas, who created an etherial knotted piece that reacts to motion.

‘the project surrounded the idea of garments that change shape through air and that interact with the environment,’ paula canovas says. ‘I have incorporated the idea of knots with a floatier feeling and I have also documented the way the shapes change when air is introduced.’ 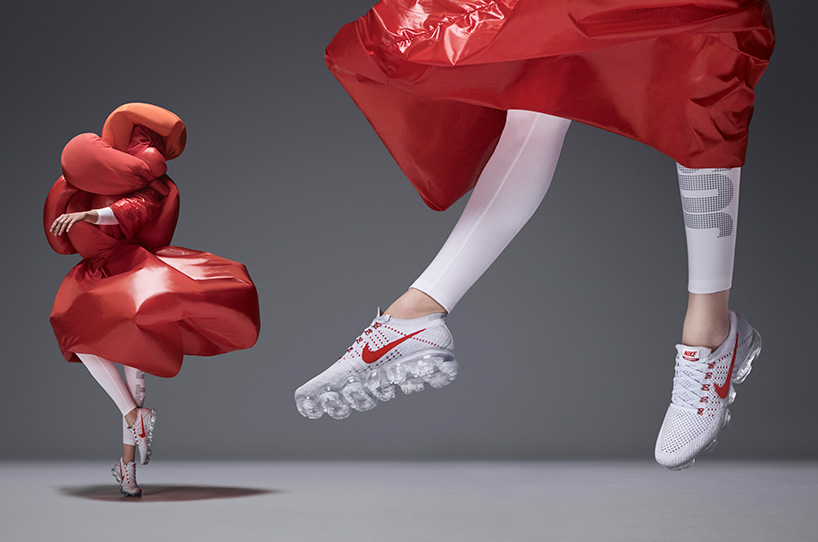 paula canovas decided on a palette of red and orange

‘I wanted to capture how the shape changes with movement and how it adapts to both the body and to air,’ she continues. ‘I chose a subtle monochromatic palette of red and orange so that the focus remained on the structure of the garment and the VaporMax. the fabrics chosen are of different qualities of nylons and the knotted drapes are padded with wadding to give an inflated effect.’ 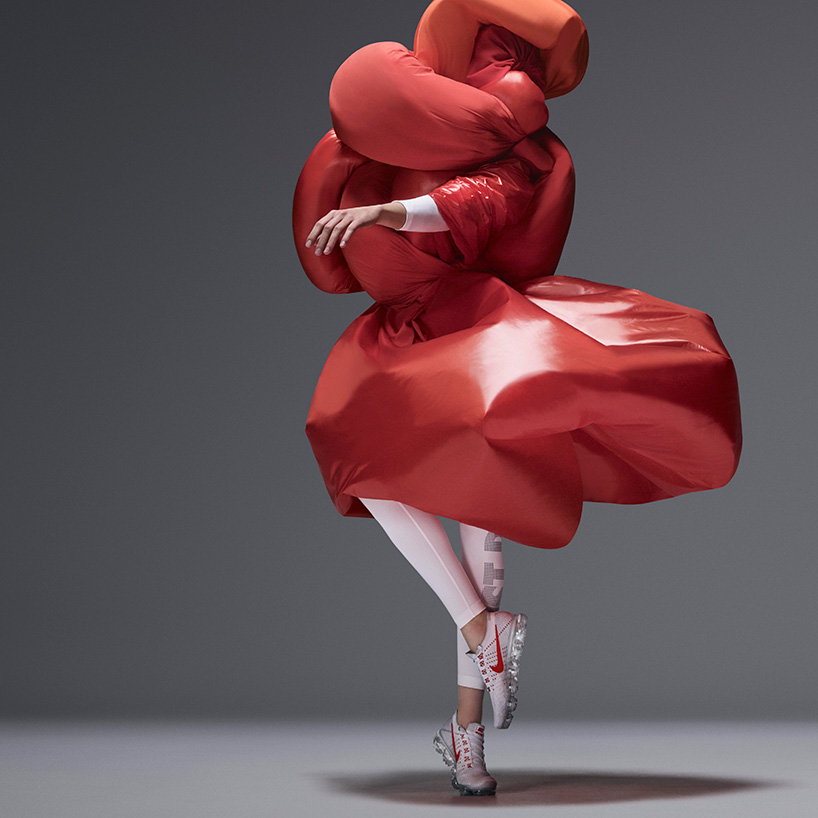 knotted areas are padded with a soft, think material to give them a balloon-like effect 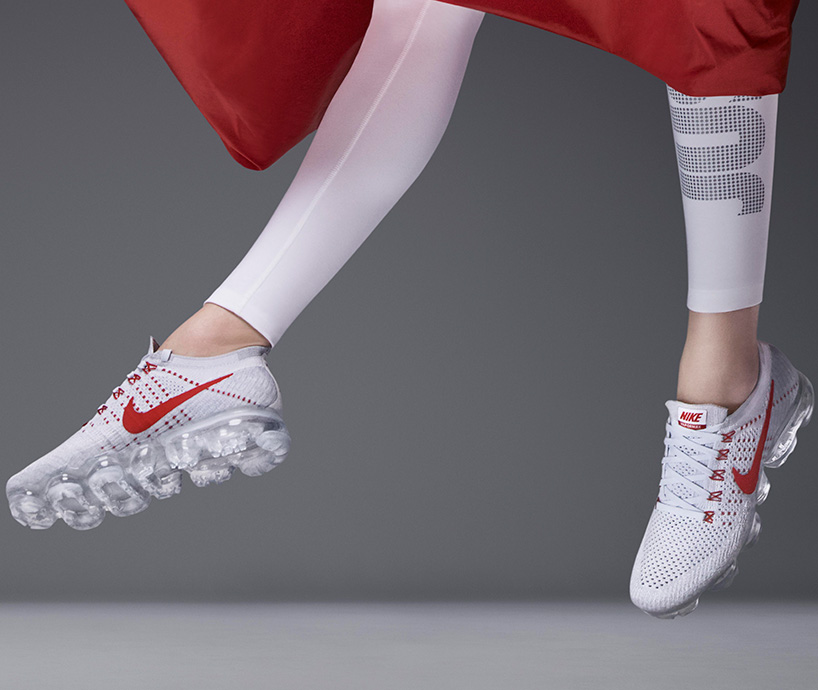 the idea of knots come together with a more airy feeling

designer shizhe he from new york’s parsons school of design worked with unusual materials in the making of an innovative woven garment. ‘for this collection, I used plastic packaging film as the material, which protects furniture from being damaged during moving,’ shizhe he describes. 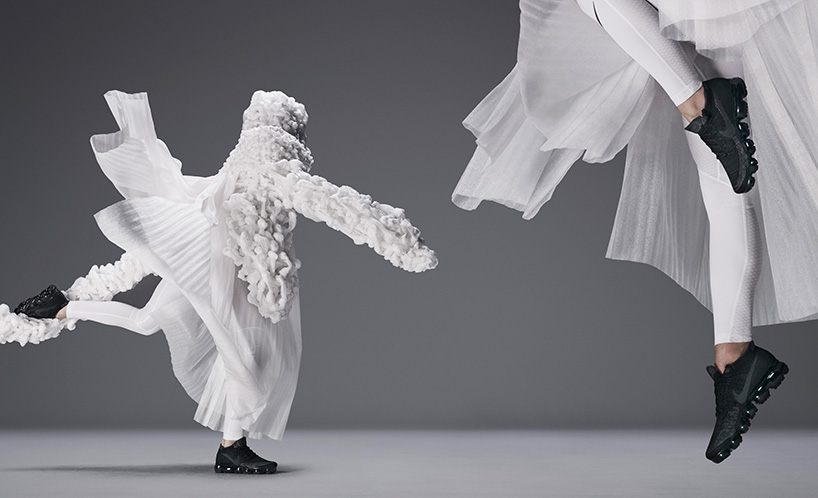 ‘I chose this material because it is not a traditional clothing fabric,’ the designer continues. ‘design must be brave in this same way—to try a different way or angle, and to re-think and experience the process. NIKE has this very spirit of innovation. the NIKE AIR VaporMax breaks with tradition by using new technology, structure and air to make the soles lighter, softer and provide consistent cushioning.’ 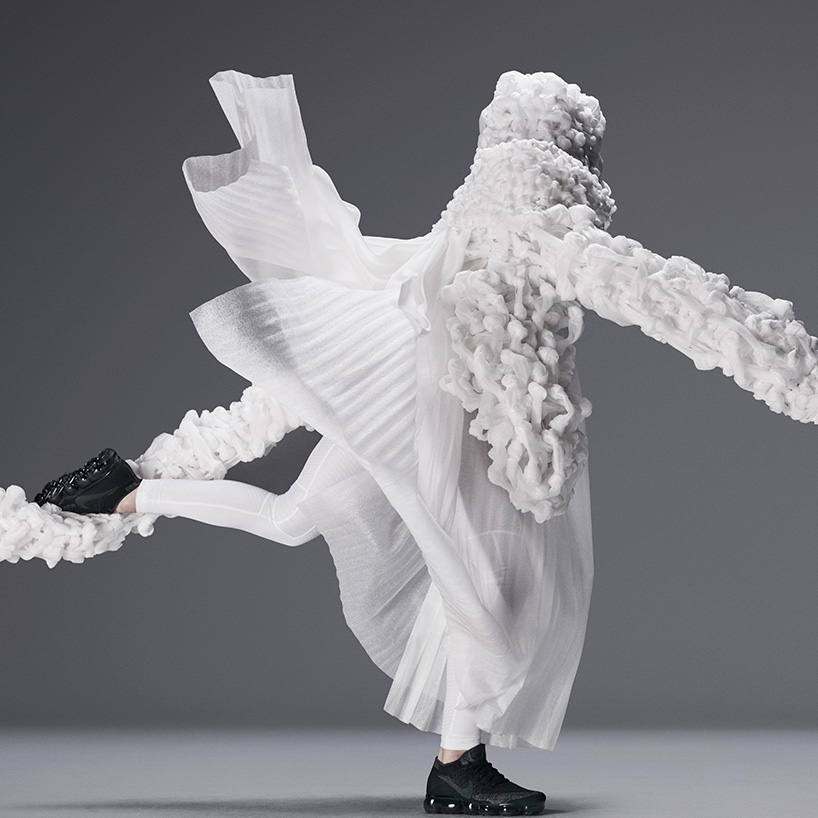 through weaving, the upper part of the costume becomes a single solid surface

‘visually it may seem hard, but touching the VaporMax gives a completely different feeling,’ shizhe he continues. ‘my dress is meant to provide the same effect, which looks like a solid sculpture. but it is, in fact, very light and flexible, allowing the body to easily move with the garment.’ 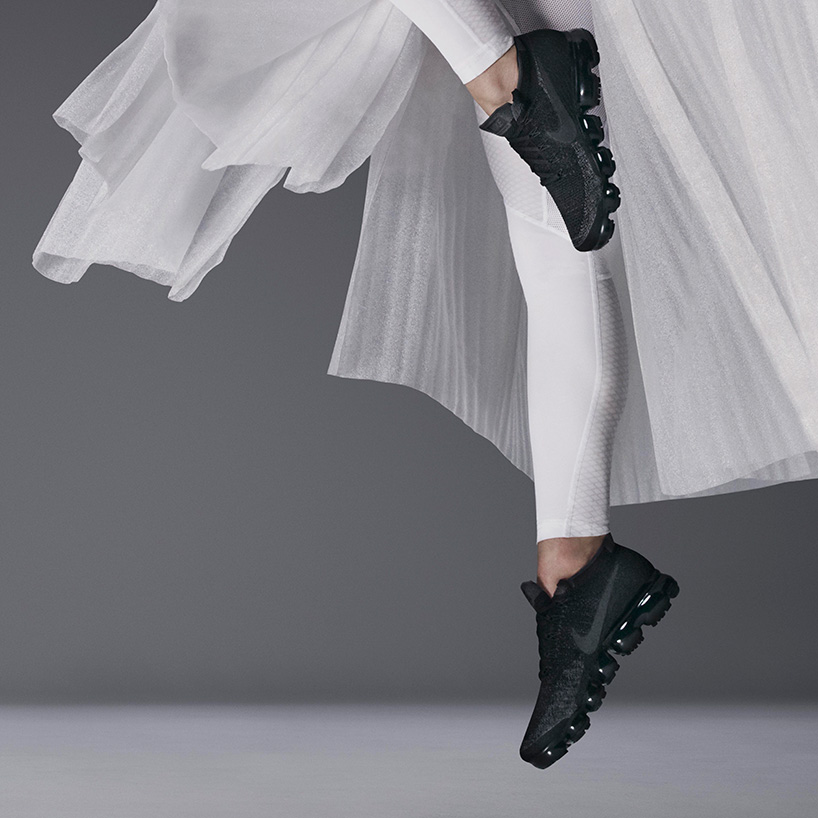 ‘I thought about how buoyancy and lightness could be expressed through air,’ liam johnson describes. ‘I liked the idea of the piece feeling like a vortex or a dense, black cloud swirling around the body. 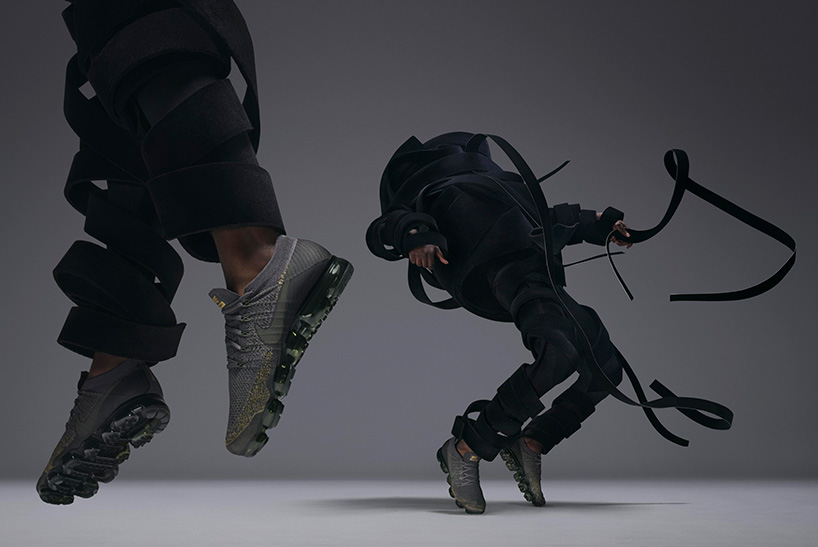 liam johnson wanted to express the themes of buoyancy and lightness

‘this led me to think about an expressive, abstract shape; tall like the clouds and wrapping around, encasing the upper body, creating an arresting visual. this would also allow for a reveal on the lower half of the body that offers movement to the legs and feet, completely encasing the upper half of the torso including the upper shoulders, neck and head. flocking seemed to be the most natural fit.’ 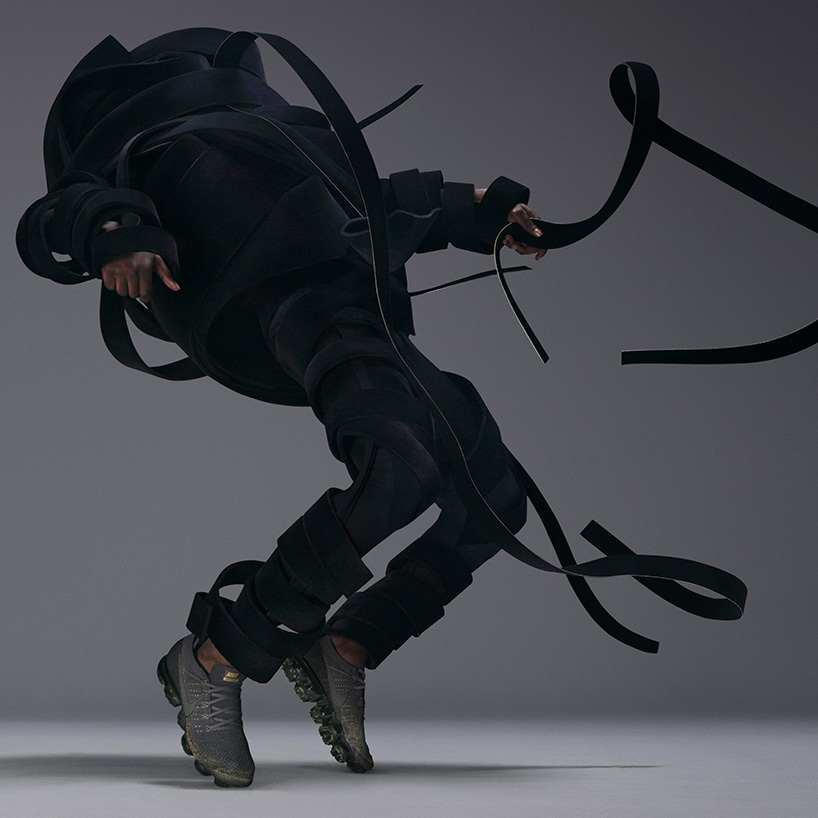 the interpretive costume evokes a dense, black cloud swirling around the body

‘I use the fabrication a lot in my own personal work,’ johnson continues. ‘the black seemed to drink all the light and perfectly fit the concept of the vortex. it also has a plush bounce texture that tied in the idea of air, while the depth in colour really lends itself to the product. the finish on the apparel gave the piece a really luxurious feel and created a strong graphic line.’ 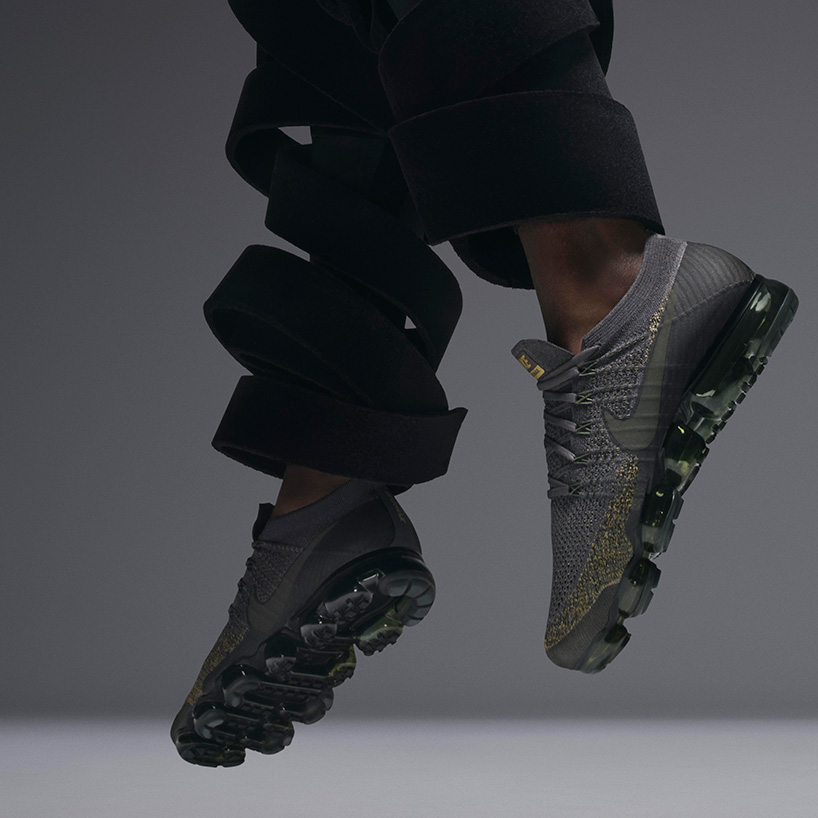 the fabric’s finish gives the final piece a luxurious feel

azar rajabi from milan’s domus academy was inspired by the flexible sole of the NIKE AIR VaporMax. ‘my work drew inspiration directly from the VaporMax, as I wanted to best represent the essence of the footwear,’ the designer says. ‘the sole, a flexible product made of a single, inflatable airbag, inspired my research and material. 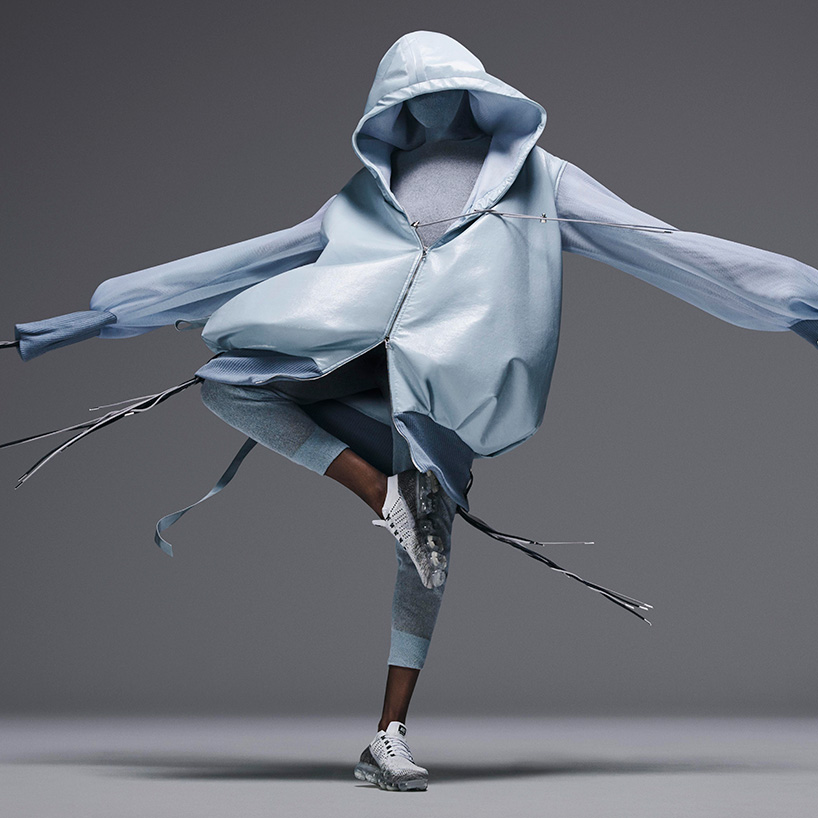 a large, adjustable hood suggests the idea of flexibility

‘pearlized neoprene mesh and texturized vinyl allowed for both flexibility and for a larger silhouette, allowing air to flow freely in and out of the coat,’ rajabi continues. ‘the idea of air in harmony with the body, and the connection between the human body and space; tying those two together with lace was another design detail I felt was important. a large, adjustable hood with shirring details or pinches, suggests the idea of bendability. the reaction of the laces and their extension from the body, exaggerates the human form in motion. as a designer, the idea of reaction is something I always incorporate into my work.’ 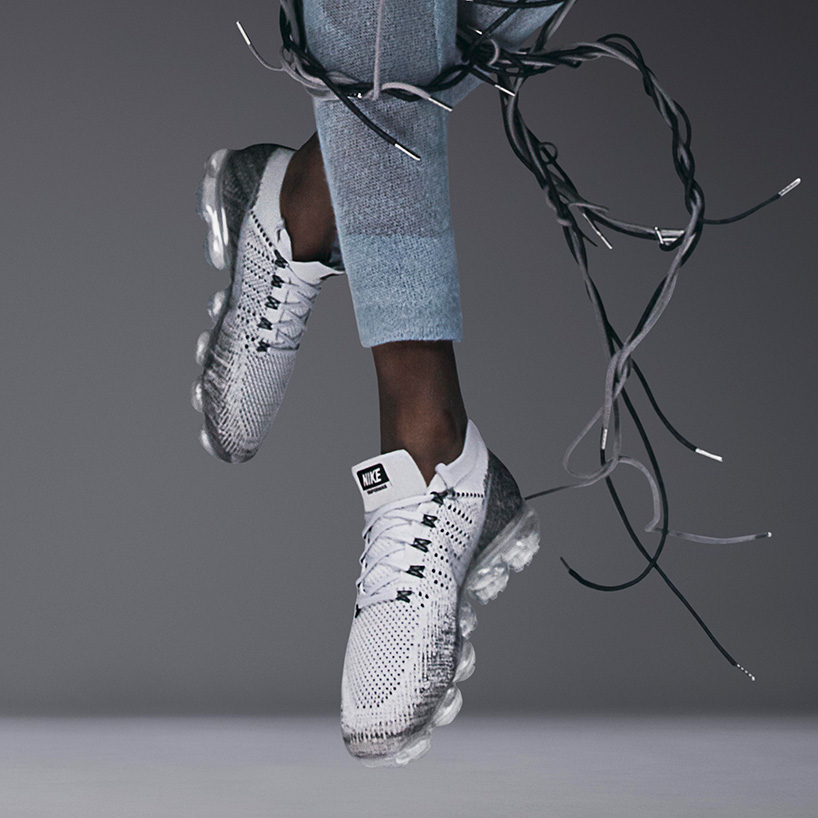