kjell ekhorn and jon forss, better known as non-format, work on a range of projects including art direction, design, illustration and custom typography.here they give designboom an intriguing insight into their working process.

DB: please could you tell us briefly about the evolution of non-format?jon: kjell and I met while working in london back in the late-90s. we began collaborating on a few music packaging projects, just to test the waters between us, and soon afterwards we were approached by the editor of the wire (an independent music magazine) and offered the role of art directors. we took this as the impetus to strike out on our own and so we began working full time as non-format. as part of our complete redesign of the wire we put a lot of energy into experiments with expressive typographic feature headlines, which became an extremely strong part of our visual language. this led to offers of typographic illustration work by advertising agencies which, in turn, funded further experiments with typography and image-making. we’ve continued to balance the commercial work with periods of intense experimentation ever since, with clients such as adobe, coca-cola, EMI, gap, IBM, NIKE, etc, asking us to work on campaigns that often focus on expressive typography or image-making, or a balance of both. we’ve also continued to work on editorial projects, despite leaving the wire back in 2005, working on publications such as varoom (adrian shaughnessy’s journal of illustration and made-images) and the sanahunt times (a fashion newspaper for a luxury department store in kiev, ukraine). we’re currently planning a relaunch of our website, which we hope will go live in mid-2013, along with forays into editorial design for digital publishing. 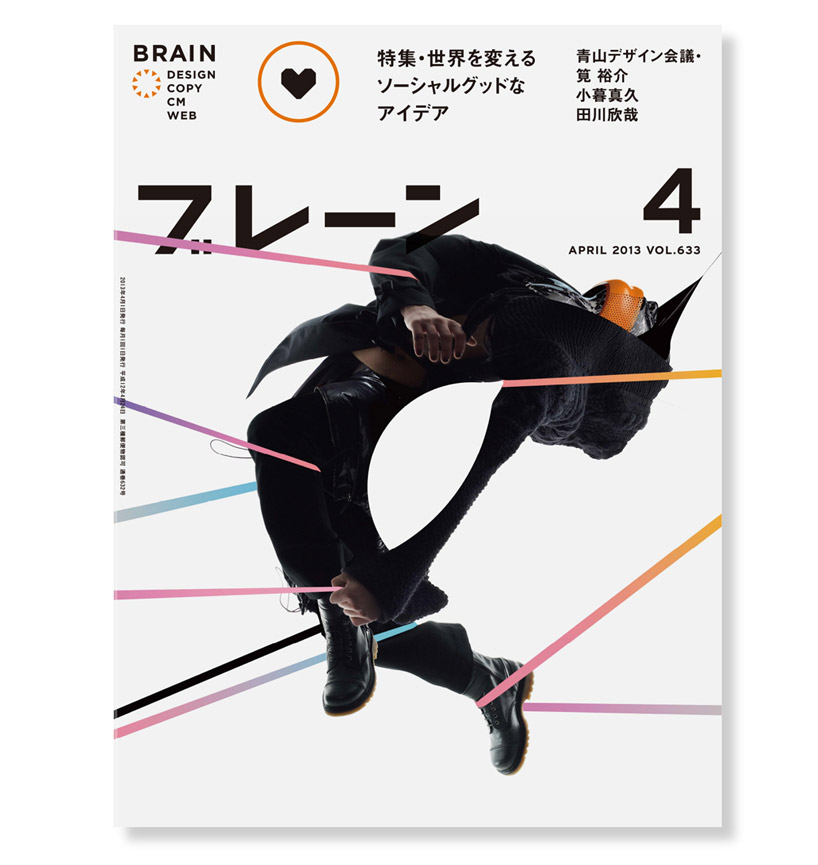 DB: how do you share your workload?jon: primarily, it’s just the two of us but we do also collaborate with other image-makers, photographers and programmers whenever the opportunities arise. we’ve been working with photographer jake walters, for example, on quite a number of projects over the years. collaboration always leads to interesting and unexpected results. on a day-to-day basis, kjell and I collaborate on each project as much as possible. as kjell is based near oslo, norway and I’m based near minneapolis there are seven timezones between us. when I start work in the morning I catch the end of kjell’s working day, so there are a few hours of overlap when we can discuss projects, swap files, and keep each other entertained. we use skype a lot; not always for a face-to-face chat, but sometimes while we’re quietly working on something, just so we know the other person is there should we need to discuss anything.

kjell: being stationed on two continents can also be advantageous to clients who often give feedback at the end of their working day. it’s nice to be able to surprise them with a new round of work that was completed while they were asleep. we’ve recently been working with a couple of clients in japan which is always fun, but we often wish we had a third member of the team based over there so we could run non-format as a 24-hour global enterprise. 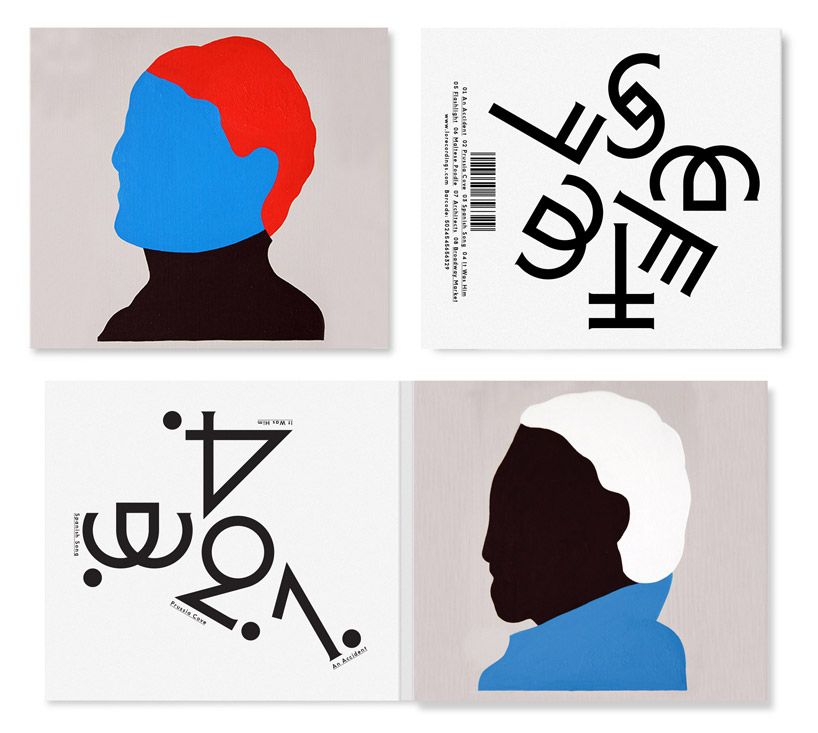 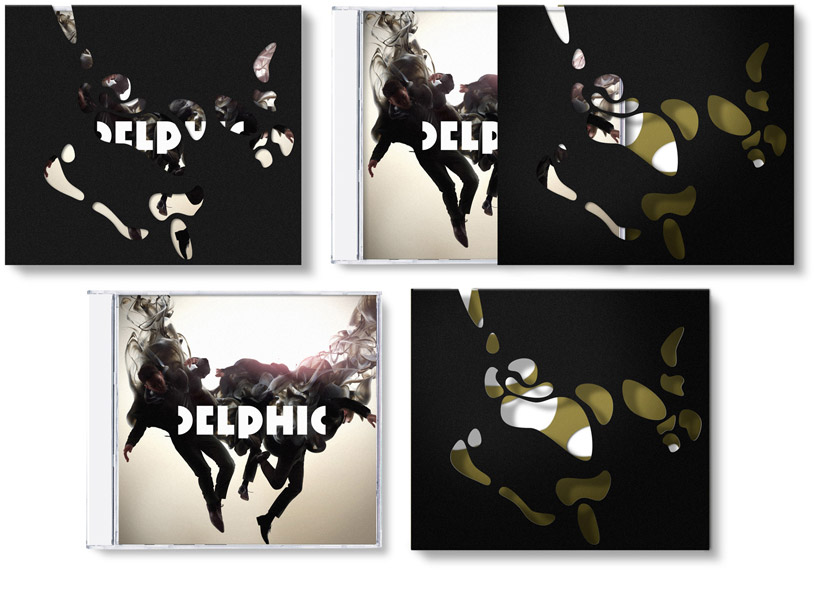 DB: which have been your most significant and satisfying projects to date?jon: the most significant or satisfying projects tend to be the ones that offer the most freedom or the most exposure. we tend to pour our heart and soul into every project, so it’s always most satisfying when a client is willing to consider solutions they weren’t necessarily expecting to see. and if a project has a decent amount of exposure then it’s more likely to lead to new projects by clients that are already on our wavelength.

kjell: if you do a google image search for non-format you could be excused for thinking that our fashion story for cent magazine (shot in collaboration with jake walters) or our zoom lebron III campaign for NIKEmust be some of our most significant projects. commercially they both did open quite a few doors for us but gauging which projects actually have been most significant, in terms of creatively, is more difficult to pinpoint. quite often it’s not necessarily the most high-profile projects that have been the true catalyst for noteworthy shifts in our approach. any project which gives us a first whiff of something potentially great is always exciting creatively – even though it might fail to become a truly memorable or celebrated piece of work in its own right. 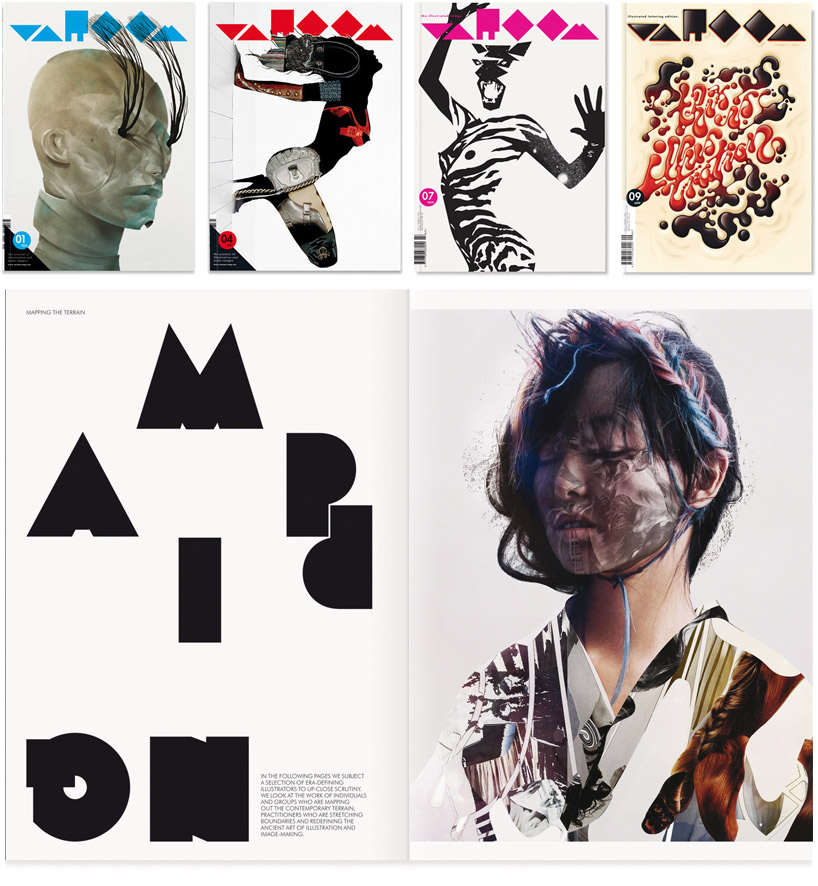 art direction & design for varoom – the journal of illustration and made-images, 2006-2009 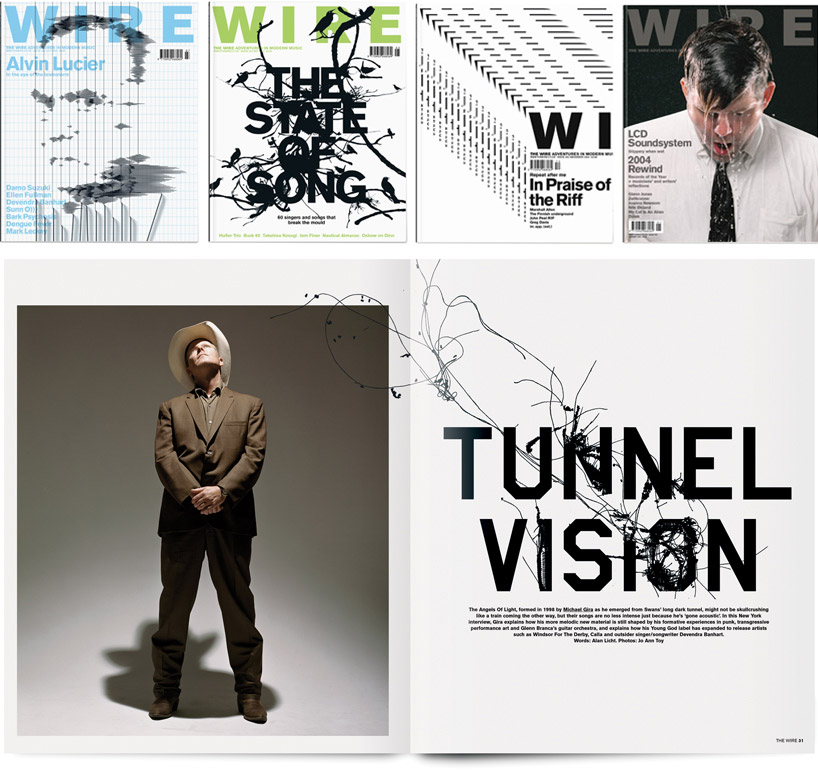 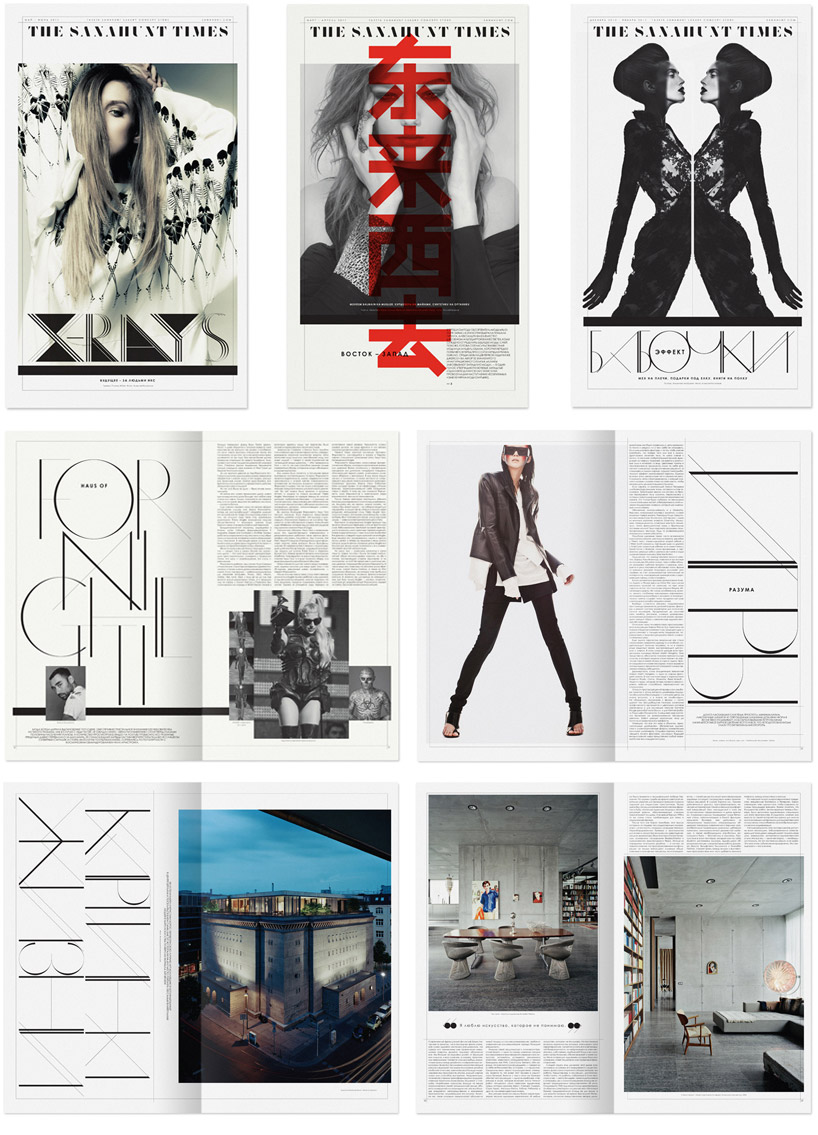 DB: do you think it’s important for a graphic designer to be able to draw?jon: no. not really. but then I would say that because, as far as I’m concerned, I can’t draw. drawing is merely one way of communicating with people. one of the great things about software such as adobe creative suite it that it allows people who can’t draw to find new ways of expressing themselves, and to find an audience. I think it’s more about exposing yourself to as much influence as possible. the more you see, whether it be drawing or painting, sculpture or architecture, industrial design or graphic design, the more of culture that gets absorbed into your system, and the more discerning and adept you become at recognising originality when you see it.

kjell: even though I’m not a great draftsman by any stretch of the imagination, it was my love of drawing that made me seek an education within the visual arts. however, having said that, I’ve never actually used my drawing skills beyond simple sketches, so I have to agree with jon – you need to be a visually driven person but not necessarily one that can draw. 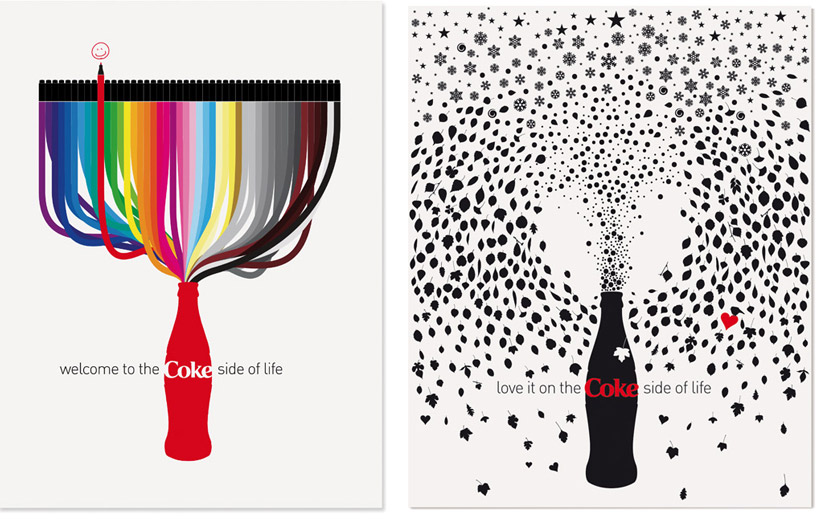 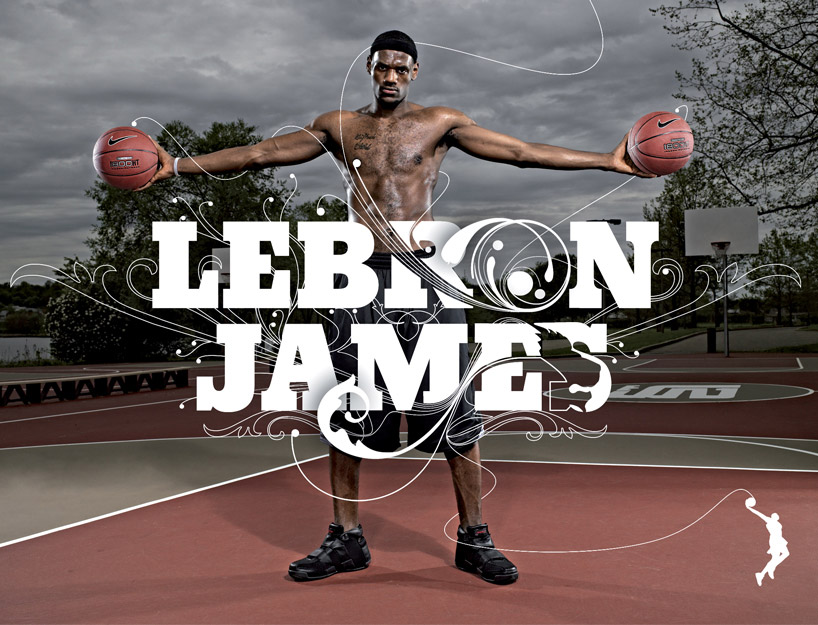 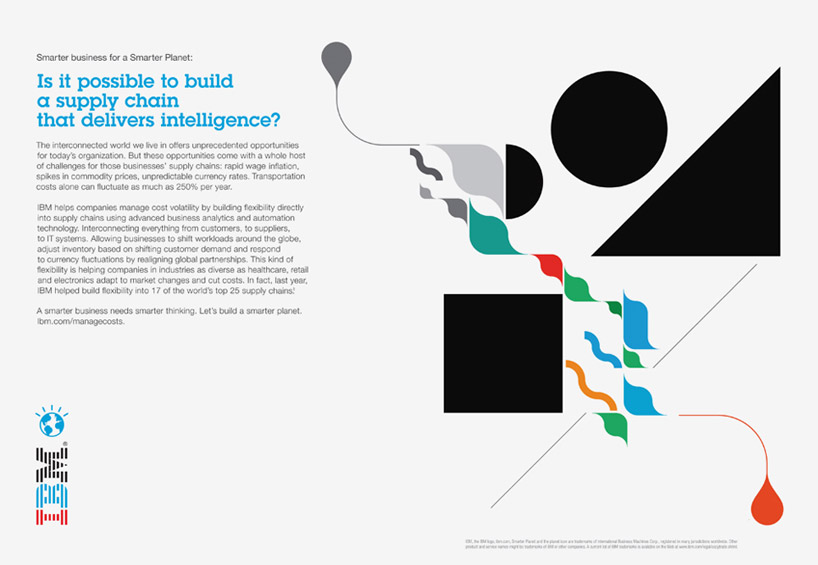 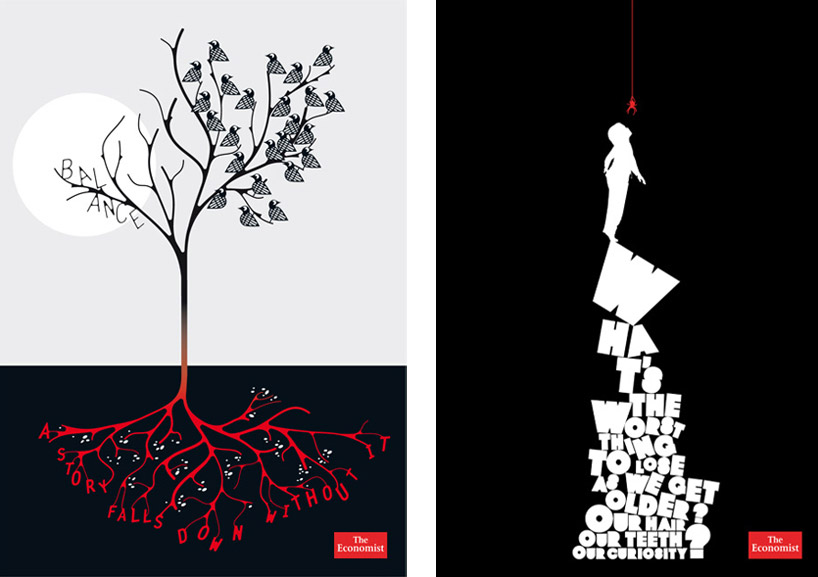 DB: what do you think the most significant developments in graphic design have been in the last five years?kjell: I think one of the most significant changes over the past few years has been the pace of change itself. with more and more people gaining access to the tools needed to create design projects, we’re seeing increased diversification of ideas, styles and influences, as well as a broadening of the skills that each new generation of designer brings to the table. I’m not just referring to those that embrace technological advances, but to those that bring a thorough understanding of other disciplines entirely, such as the social sciences. of course, interconnectivity is not just changing graphic design, it’s changing everything.

DB: how do you think the popularity of online design resources has influenced design being produced today?jon: ‘online design resources’ is a pretty broad term. if you mean the plethora of design blogs and tumblr sites showcasing a myriad of design projects intended as inspiration for other designers, then the influence is clearly profound. once we post a new project on our site, for instance, it’s only a matter of hours before it finds its way onto several design blogs and showcase sites. of course, this means that our work can be seen by a great many more potential future clients (usually creative directors or art directors at ad agencies or larger brands) than it would without this kind of social media exposure. however, it can also become assimilated into a giant pool of inspiration for other designers. but inspiration comes in many forms, and the success or failure of any project will always come down to the talents of the designer, no matter their source of inspiration. being able to view projects from all around the world, often mere moments after they are launched, gives a wonderful overview of the mood of the design world in general. we risk a homogenising of design on a global scale, of course, but different cultures interpret design in different ways, which is always going to lead to interesting results. the only shame is that the ‘new’ is eaten up and regurgitated that much quicker than ever before. it’ll be interesting to see how it all plays out as we head further into this decade. 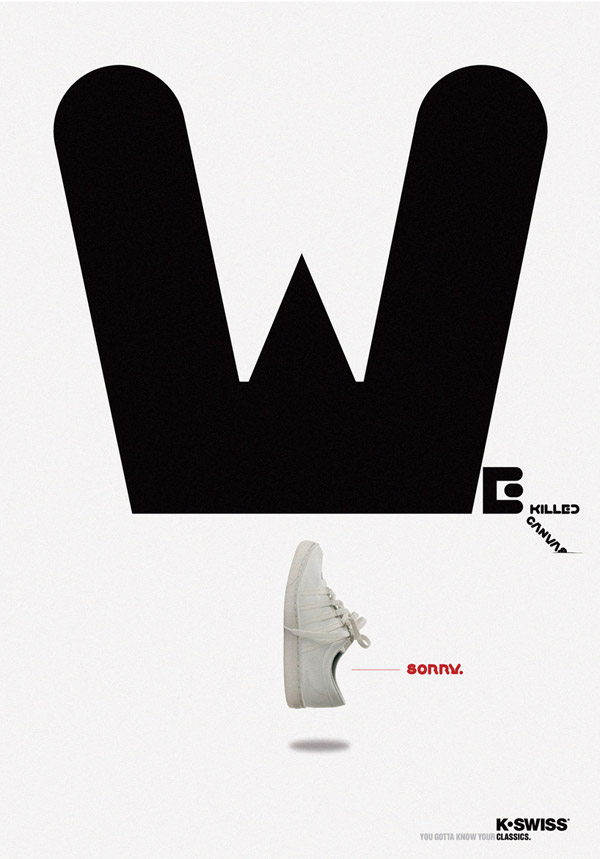 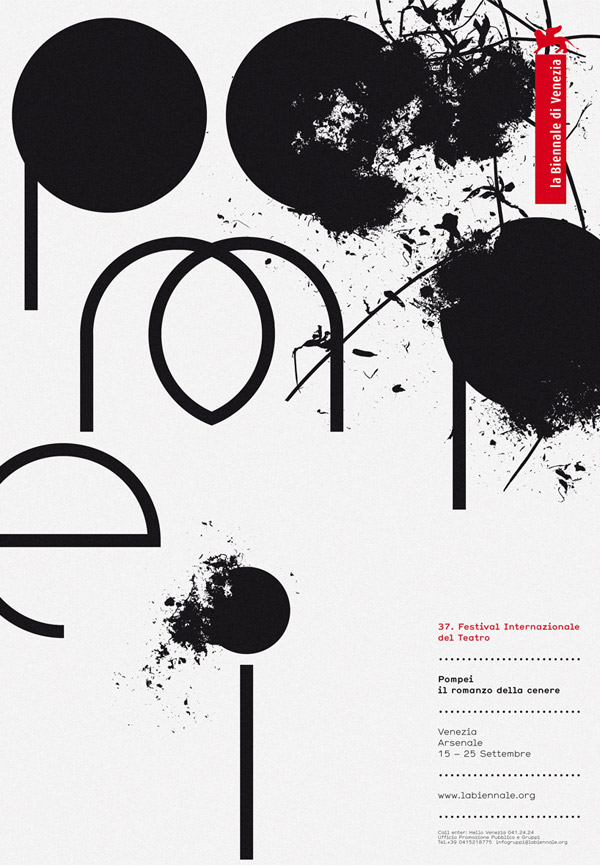 festival poster for the venice biennale, 2005 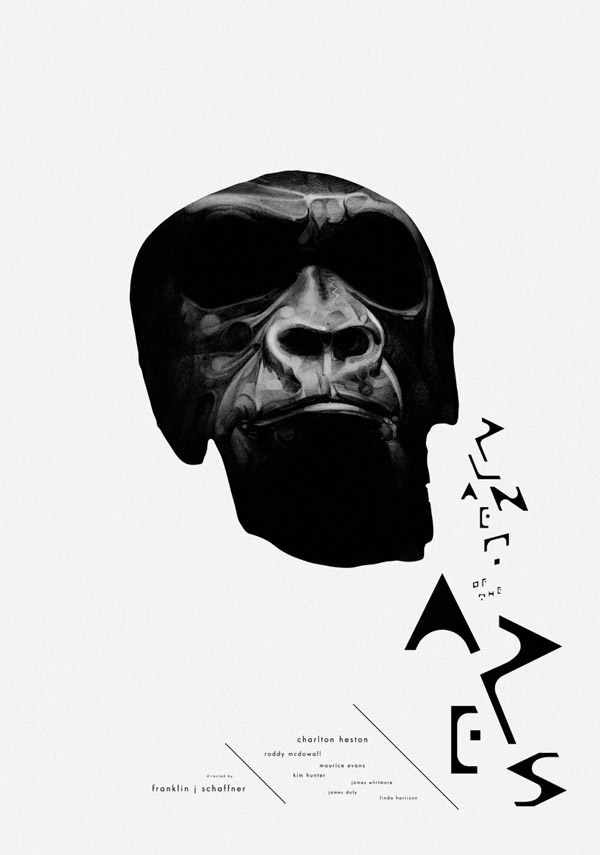 planet of the apes poster. self-published, 2008

DB. besides your professional work – what do you have a passion for and why?jon: I pretty much followed the old adage about choosing a job I love so I won’t have to work a day in my life. I’m not one for hobbies, and I’m not exactly sporty, apart from being a fair-weather cyclist. if i said I absolutely love NPR’s radiolab podcasts that might give you an idea of the sort of things that turn me on. I’m a pretty voracious devourer of music too. I can’t live without having something new to listen to.

kjell: relocating from london to oslo in 2009 has meant a natural rekindling of my love of winter sports. sixteen years in a gritty metropolis, with dull rainy winters, had pretty much made me forget how amazing a proper white winter can be. it’s fabulous to have four distinct seasons again and there is nothing quite as life affirming as racing through the forrest on skis on a cold crisp winter morning… (before switching on the mac and finding out what magic jon has been up to overnight.)

DB: what lessons have you learned from a project that has changed your outlook on life?kjell: I think the most significant lesson has been to trust my heart as much as my head. things can get terribly dry and dull if they’re over thought. if something strikes me on an emotional level I’ve learned to trust that instinct and embrace it.

DB: what mistakes or ‘traps’ should a young graphic designer avoid?jon: don’t try to please everyone. you can’t please all of the people any of the time. ever. so, it’s best to explore your own path, get passionate about your work and, in this age of global interconnectivity, your audience will find you. hopefully. 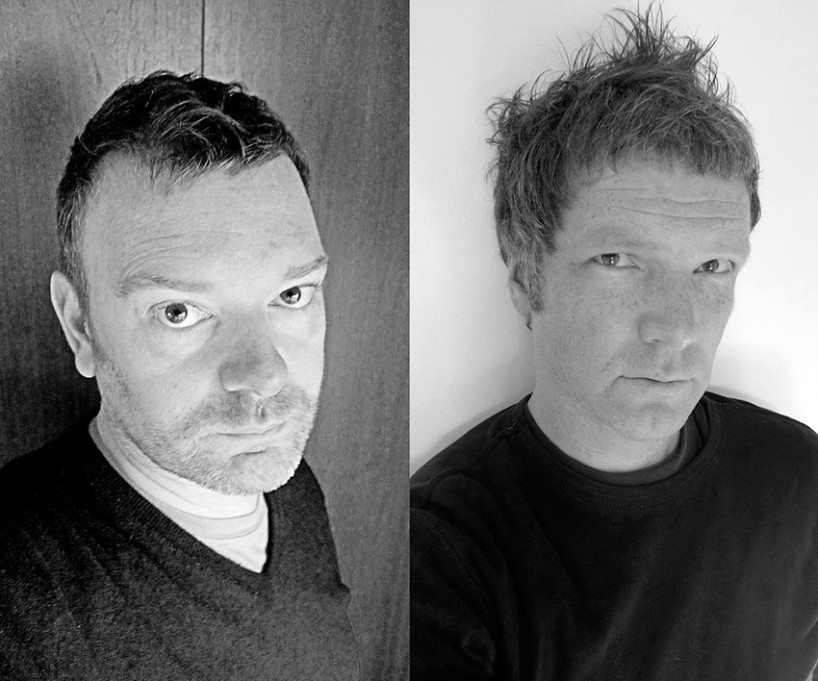 DB: what is the best piece of advice you have ever been given?jon: ‘to suggest is to create; to describe is to destroy.’ – robert doisneau.kjell: ‘if people never did silly things, nothing intelligent would ever get done.’ – ludwig wittgenstein

DB: what is the worst piece of advice you have ever been given?kjell: I haven’t really acted on any advice that has derailed my career or led to any major disasters, so it’s hard to tell if any advice has been truly bad. my philosophy is that;‘nothing is so bad that it’s not good for something’, so I tend to look for the positive in any situation.

jon: for me the worst advice is usually just dogma. I recently saw a list of rules for good typography and, of course, I immediately started thinking of ways to break each and every one of them. here’s my advice for your readers, ‘challenge every rule’. that’s just a suggestion though, not an instruction. 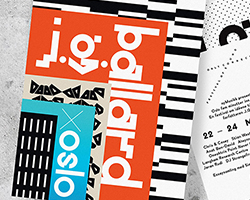