‘for the first time each of them is presenting completely new creations (free edition prototypes, small production and new editions) during the milan furniture fair. radically different from each other but united in a spirit of complicity and solidarity, these designers are outlining the new contours of the french domestic landscape, whilst their creations form a manifesto for the freedom of expression and to take initiative.’ cédric morisset, curator. ‘souviens toi que tu vas mourir’ (remember that you will die) chair by pool

‘souviens toi que tu vas mourir’ chair is an emblematic monobloc chair reinterpreted as an expression of vanity… this memento mori represented by a skull acts as a leitmotiv for those who seek the comfort of a chair and the ceremonial act of being seated. it is made from fiberglass and measures L55 x W50 x H88 cm. 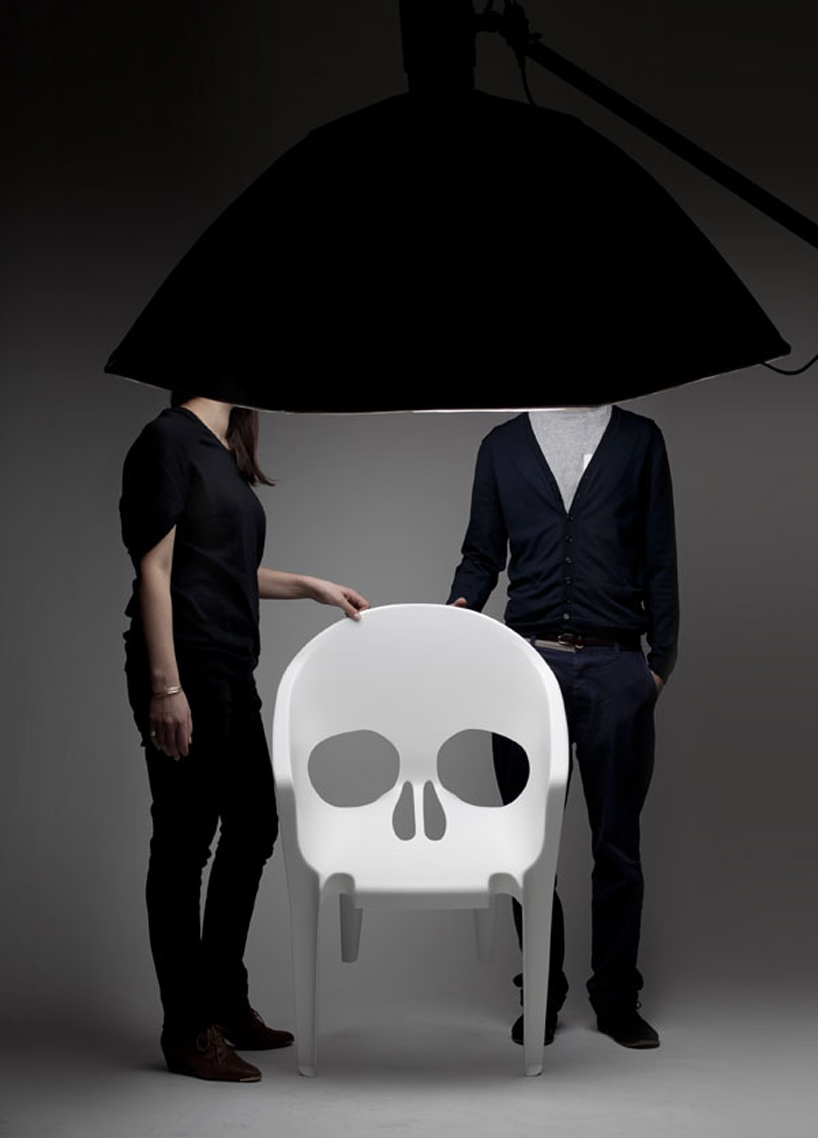 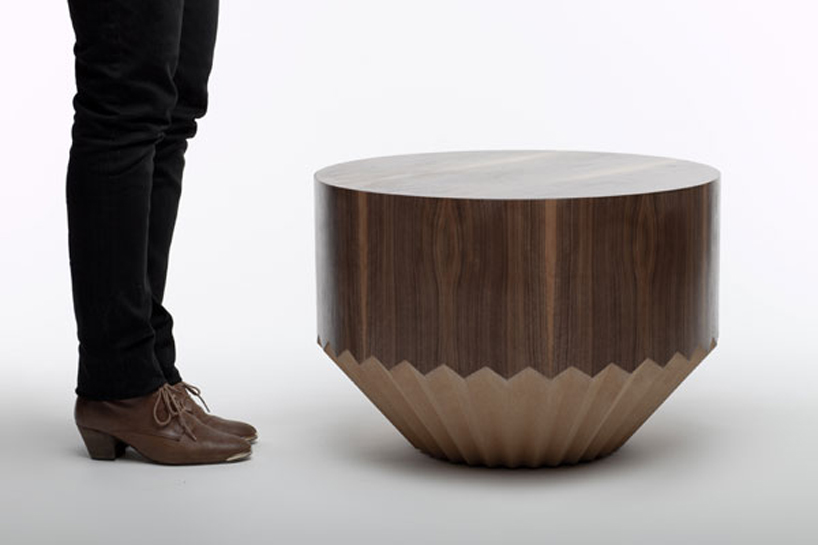 borrowed from the forest, the trunk ‘wryneck’ uses both the craftsmanship of the veneer and industrial technology of digital cutting, to find its place in a domestic space, without renouncing its original state. 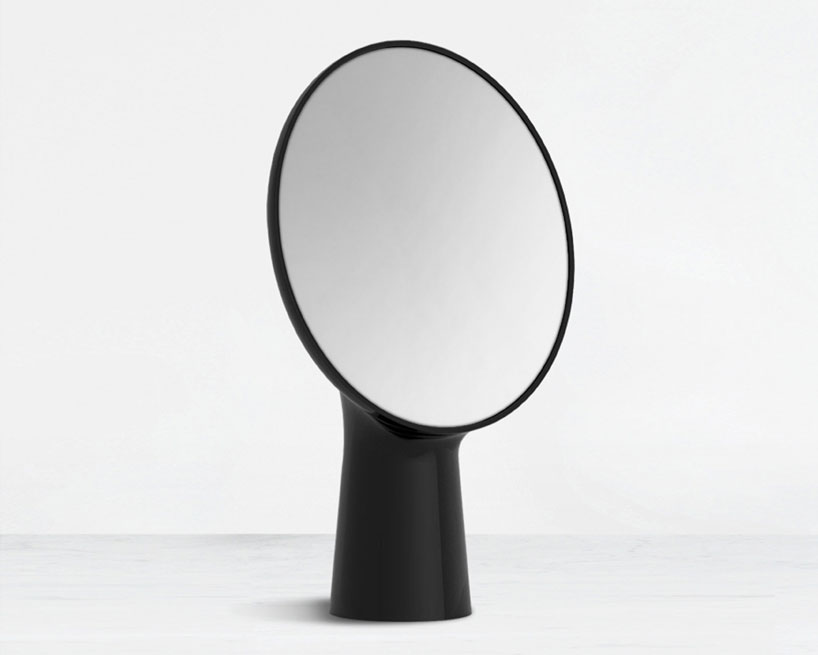 these mirrors designed by ionna vautrin give the strange and intriguing feeling that someone else is watching us from the other side. this convex mirror sits on a conical foot concrete like a statue of a character observing his environment. the mirror is a prototype for french furniture brand moustache. 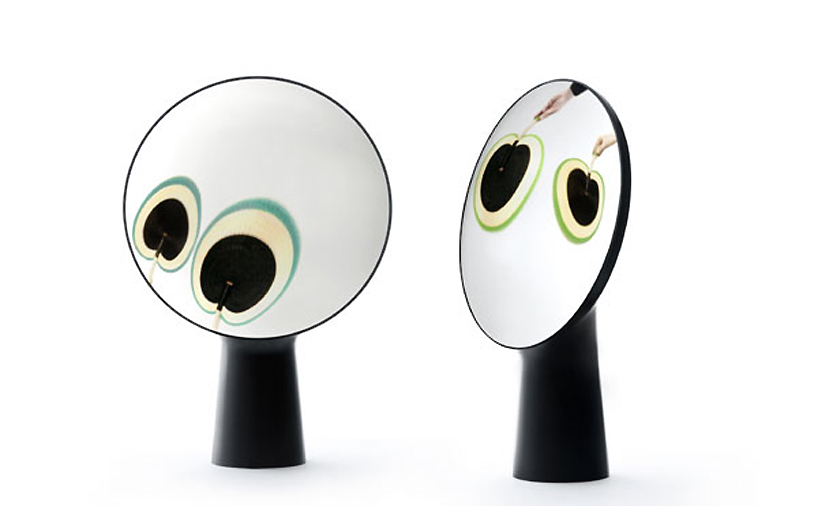 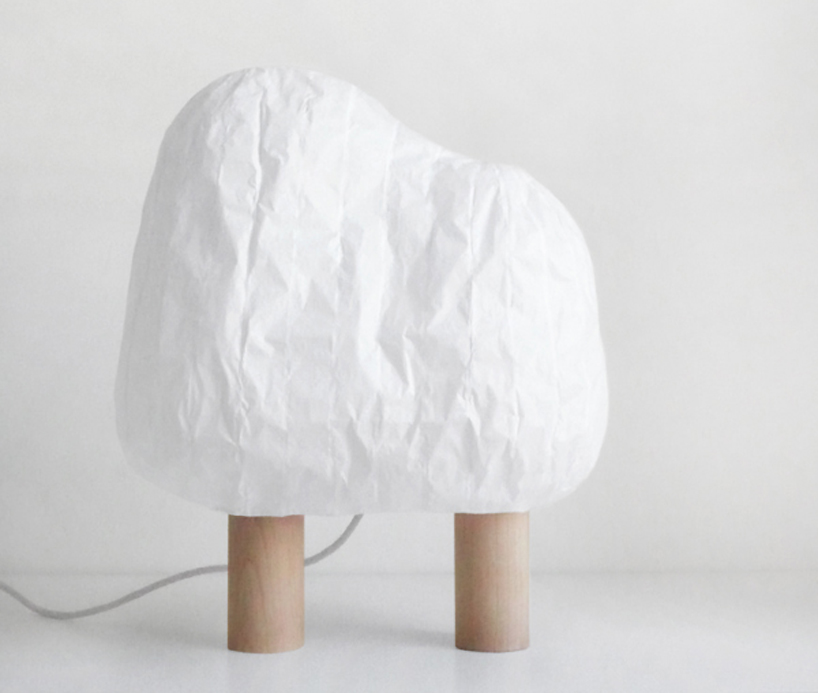 ‘forêt illuminée’ floor lamp is meant to be a depiction of two trees intertwined, an imaginary animal, a cloud hugging the ground… composed of a luminous cocoon wearing two trunks of wood, this light awakens the imagination. two simple wood cylinders extend as light masts on which lies a misty lampshade in Tyvek®. the lamp is a prototype for super-ette. 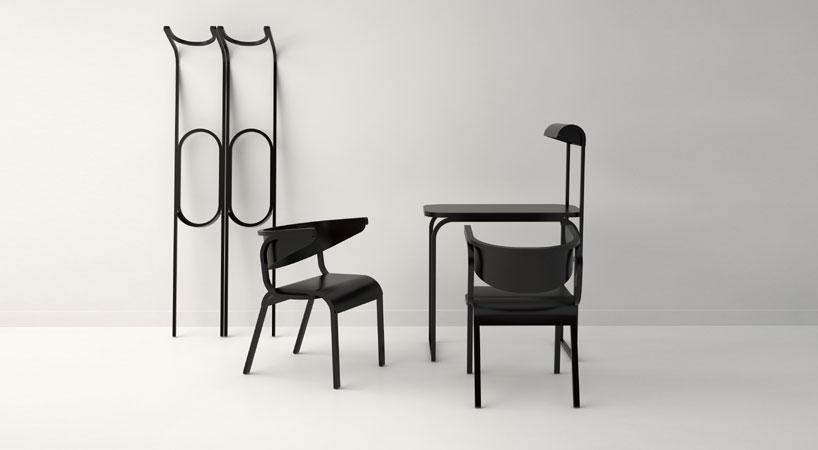 the ‘perch’ collection consists of several pieces based on the same construction: a reading chair, coat rack, rocking chair, chair and desk with integrated light. with this collection pierre favresse wanted to show a large family of functional working off the same principle. 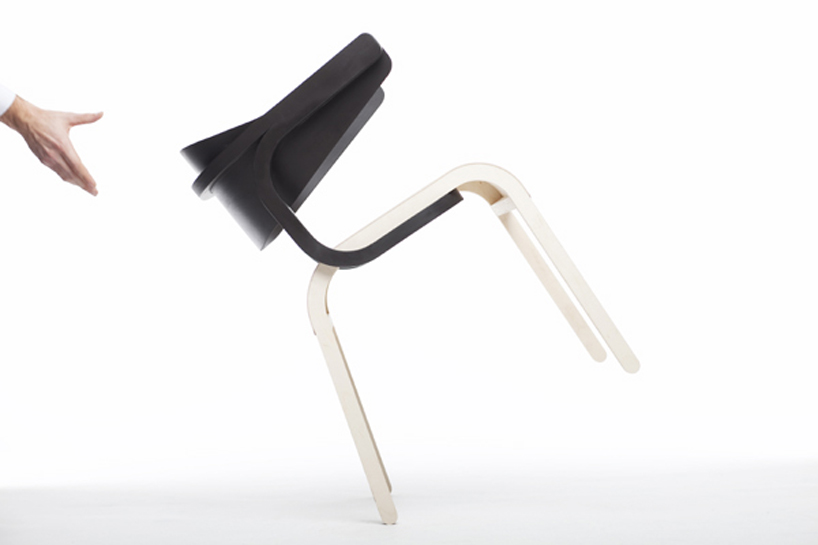 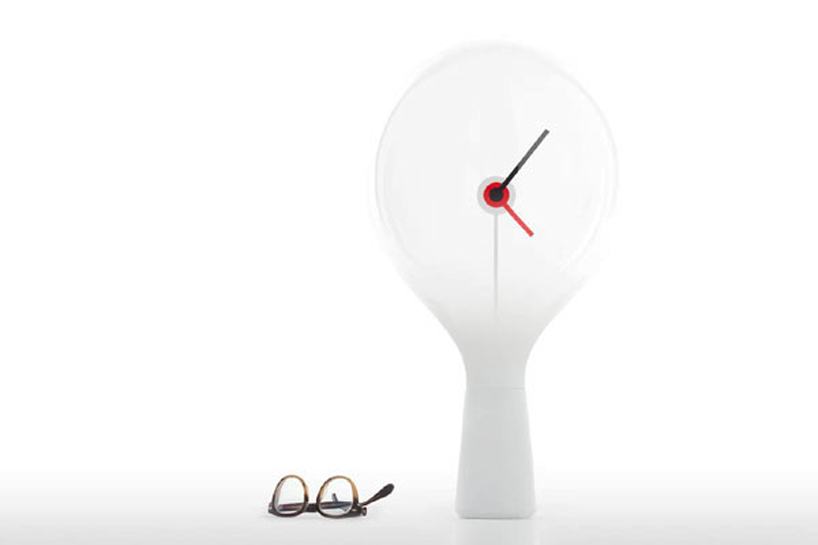 time and life are inextricably linked – we feel the pressures of time in our daily lives more and more. with this design pierre favresse wanted to encase time within a delicate white cloud of glass. inside the bubble, time is magnified, protected and cared for. each clock is hand-made glass, blown with a single breath, each one unique – just as each of our lives are. ‘jean’ is favresse’s girlfriend, someone who reflects the idea of something powerful, yet packaged in a fragile envelope – a girl you want to take care of, yet who is free and lives to her own rhythm – just like time, just like life. ‘jean’ is a prototype for super-ette. 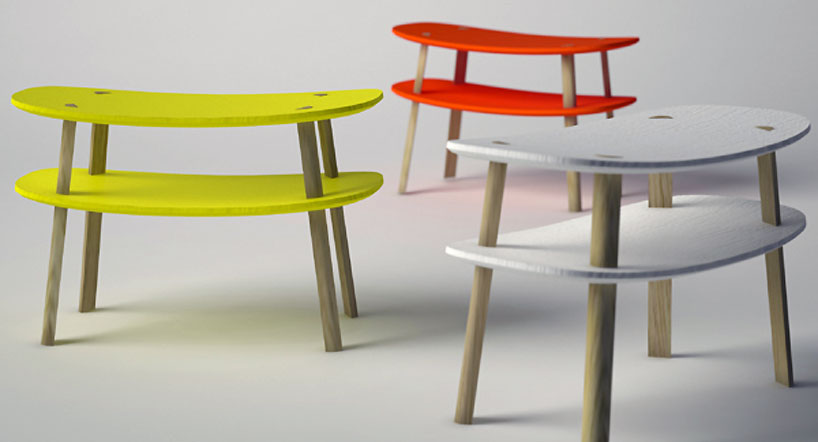 the form of A+A cooren’s ‘torii’ stool is drawn from that of the traditional japanese shrine gate, made from ash and oak wood. the furniture object can fit into any small space, and can be also used as an ottoman. the shelf under the comfortable curved seat can be used as a storage space for magazines or books. the project is sponsored by pdpora MSAA. 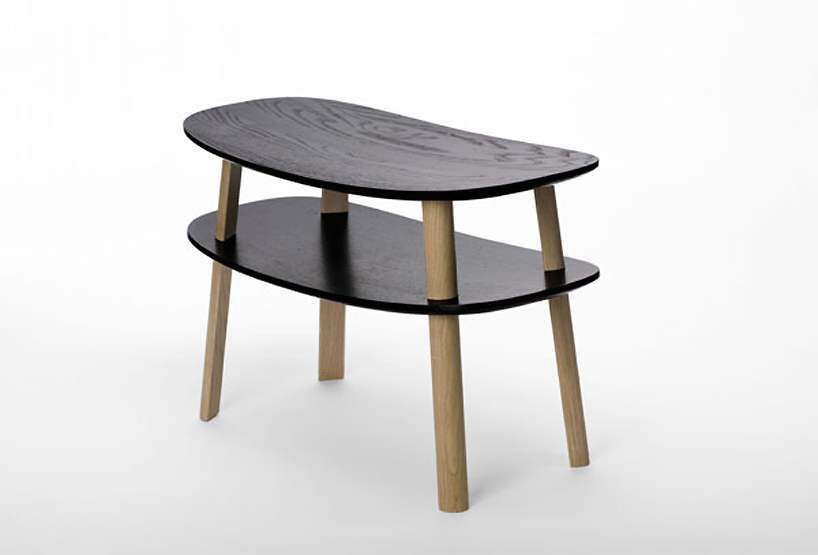 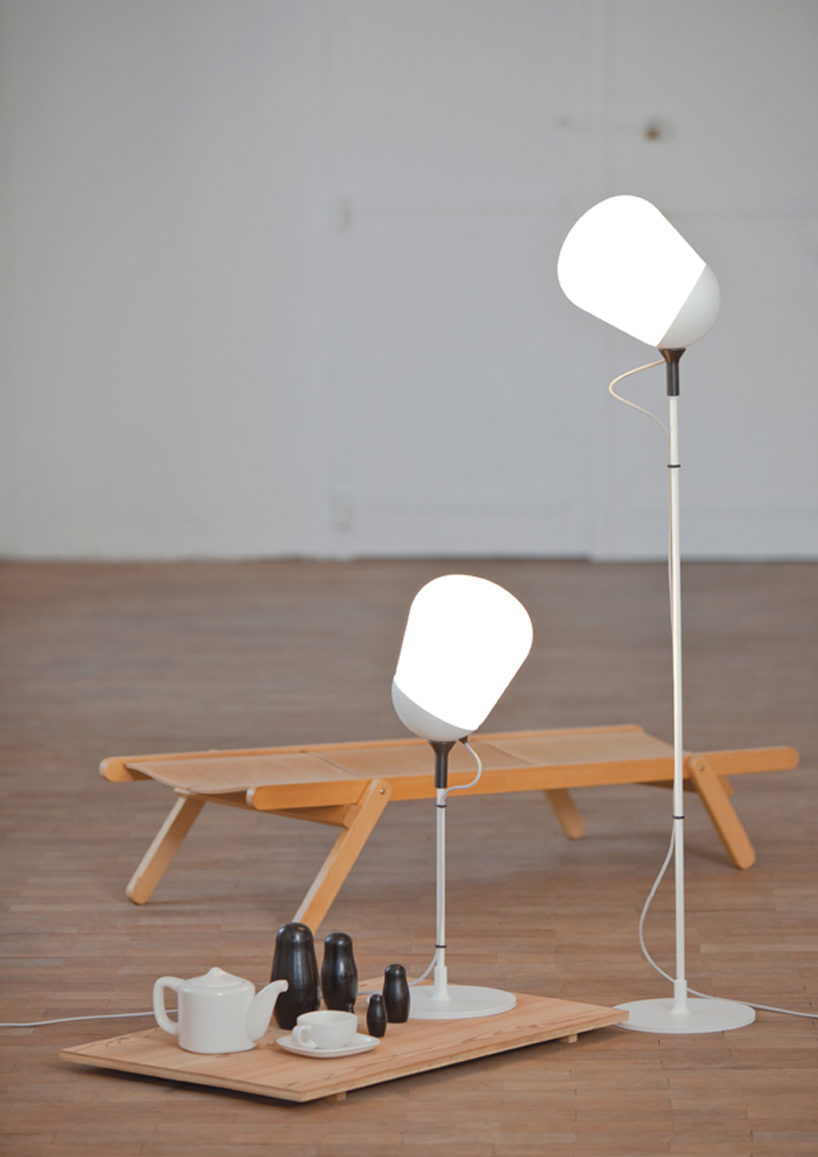 ‘hyppo’ is a series of lamps attached to a magnetic spindle. designed by A+A cooren the rounded glass volume of the lamp with reflective metal calyx stays stable by the pull of magnetism. 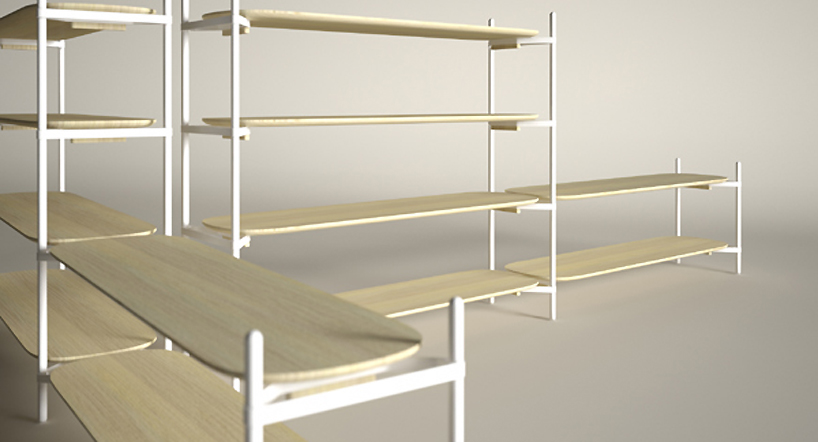 influenced by a children’s rubber-band toy gun, the wooden shelves of A+A cooren’s design are affixed to vertical tube legs by a large metal band. by combining the module elements, the height and width are easily customizable. the project is sponsored by podpora MSAA. 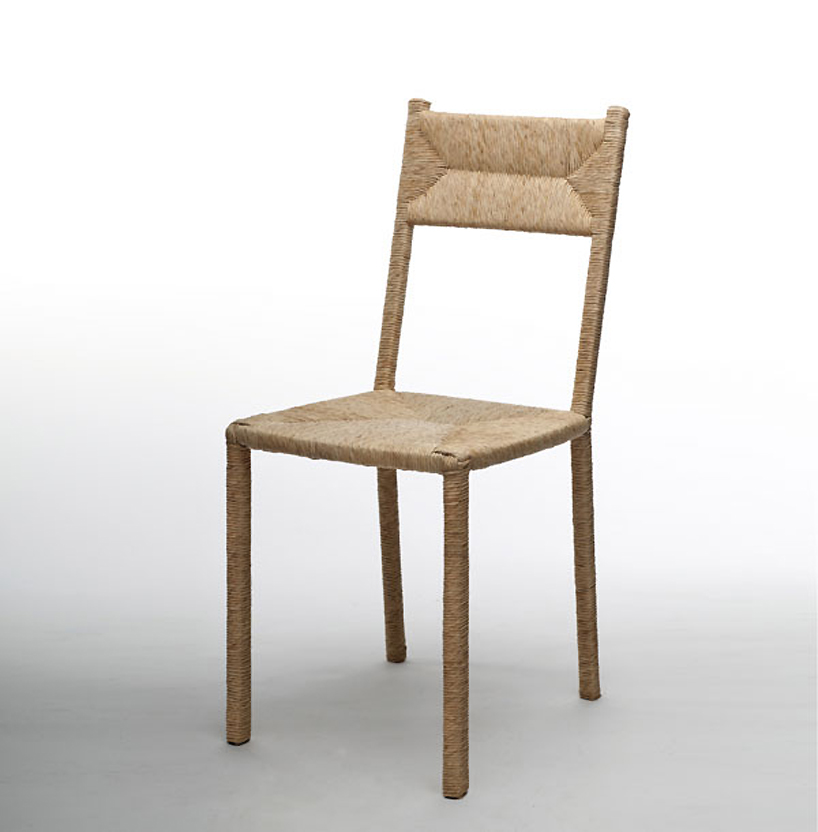 covered entirely with straw through means of a traditional rushing technique, the ‘rush’ chair by NOCC can strongly be associated in popular culture with traditional peasant furniture. it has an inner steel structure, with an overall shape that is no longer restricted to the bulky aesthetics of the past.

‘in barely 3 years, the french design market has seen more editors and design galleries emerge than over the the ten years (ymer & malta, next level galerie, fat galerie, galerie BSL, galerie gosserez, etc…). in very little time, their pioneering work, production, and commercialisation of new object and furniture collections has permitted a new generation of designers to stand out and become visible. their work has also given this new wave confidence. now uninhibited, polyglot and entrepreneurial,  they take risks, auto-produce and are opening out to the world. from amongst these numerous new faces,  five of which will be presented at this exhibition.’