‘jerry house’ by onion is the holiday home of a married couple with four sons in cha am beach, thailand. in 2011, the clients asked the architects to turn their seaside abode, which was then under construction, into the gathering place for the family’s members and friends. the requirement was to create a place that behaves unlike a typical house where minimal circulation is the norm, but rather like a playground where residents are encouraged to interact in such a way that none of their domestic spaces in bangkok would enable them to do. 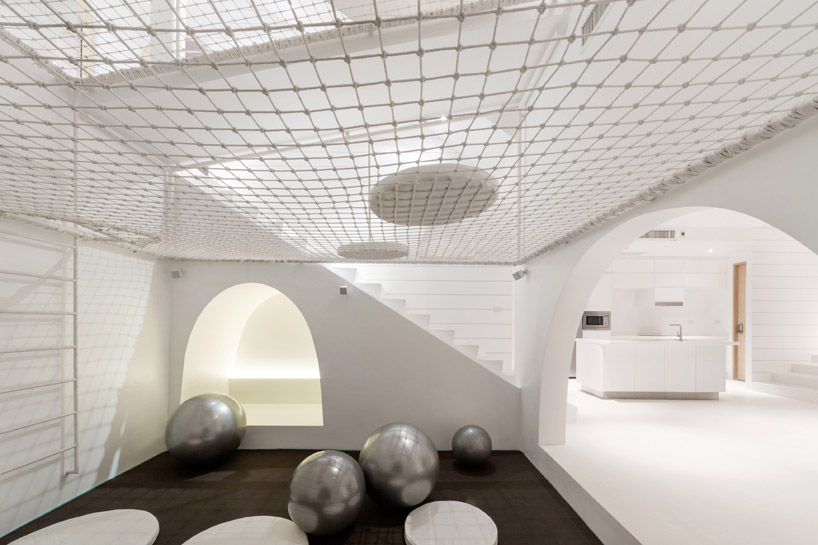 running, climbing, hiding, hanging, and even falling are the proposed physical activities which exceed the boundaries of the common lifestyle. this is why the designers based the interior of the project on an american animated series of short films from the 1940s called ‘tom and jerry’. ‘if the house of jerry the mouse were built, it might appear as a big piece of cheese in which the möbius strip would be a desirable route for him to run away from tom the cat. thus, the dwelling is thought of as the object that children would yearn for and that increases the meaning of having a holiday for the parents,’ said the architects. 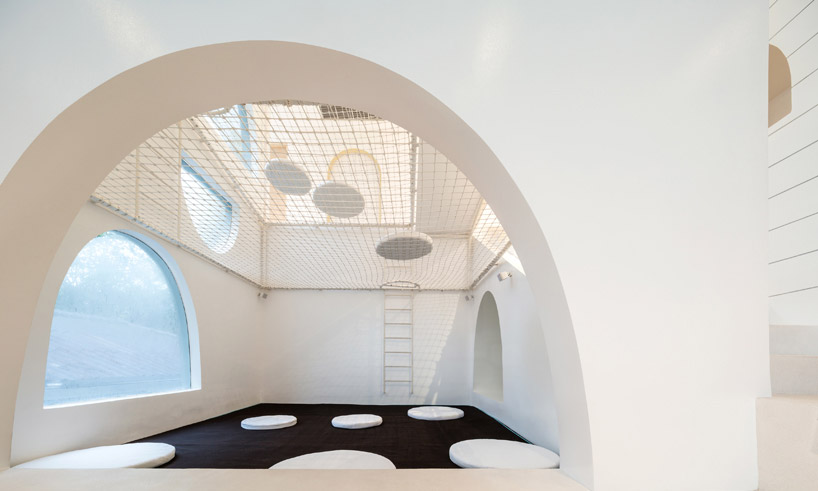 at the heart of the collective’s concern is the linkage of passageways. in response, they have added an extra set of vertical circulation cores to the existing staircases and ramps at the central hallway. using customized nets to build five layers of horizontal planes with different slopes, heights, and sizes, the features act as an extension of the floor plates within the three-storey high living hall. each series has a hole, and each hole is offset from its relative in the level below or above. this emphasizes movement throughout the route as opposed to simply stacking all the voids on top of one another. jumping out of bed and falling down through the cutouts are safe because the kids will be protected by the lower layers of nets. hanging on to them is another technique of playing as the weaves slant down to be grasped by people of varying heights. alternative modes of navigation are supplied by metal ladders that ascend from the ground floor to one of the son’s bedrooms. when looking upward, the mirrored film attached to the ceiling gives the illusion that the players are floating in the air and that the overlapping lattices are higher than they actually are. 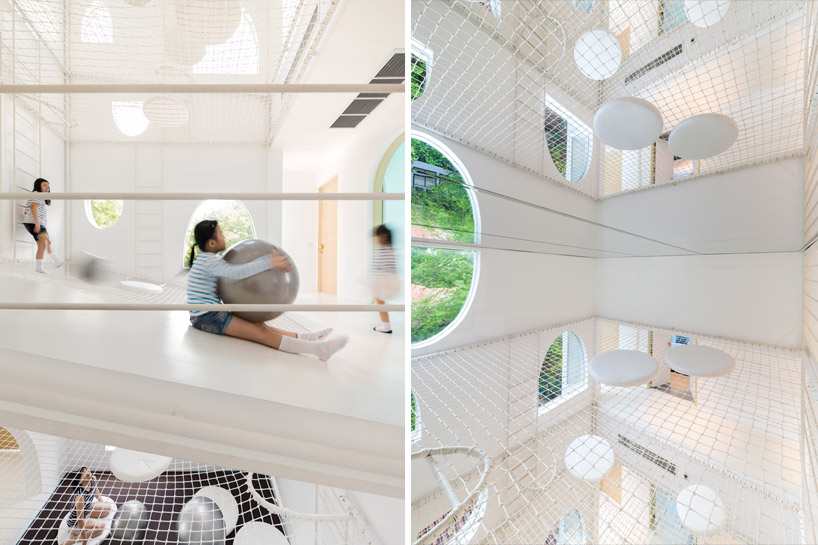 the bedrooms on the third floor provide another pathway through a linking tunnel between two spaces embedded into the walls for sleeping. in order to go to bed, the sons may climb the ladder or walk up the steps inside the built-in furnishings. they may also go to bed directly from the main living hall through a hidden sliding door above the fifth level of the nets. 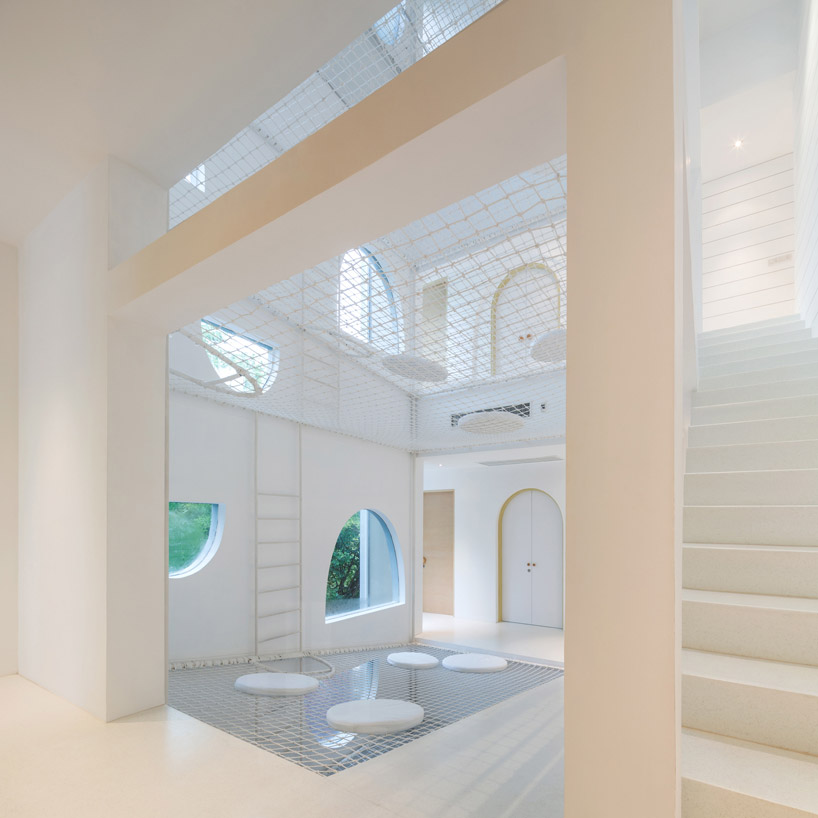 a deliberate use of color increases the visual experience of the home. all of the public areas, including the main hall, the living room, and the dining room that links between the swimming pool to the service quarter on the ground floor, are painted white. the private spaces, on the other hand, are personalized by various hues. mustard yellow distinguishes the master suite from the light purple guest room on the second floor, blue is reserved for the interior of the tunnels and sleeping areas of the two sons, and light green decorates the boys’ bedrooms on the third level. this has been done based on the observation that when playing, the children tend to identify themselves with the rooms. if the door of the chosen room is locked from the inside, the only access left will be the small tunnel that is difficult for the adults to get into, ensuring that the kids have a sense of ownership and privacy within the home. 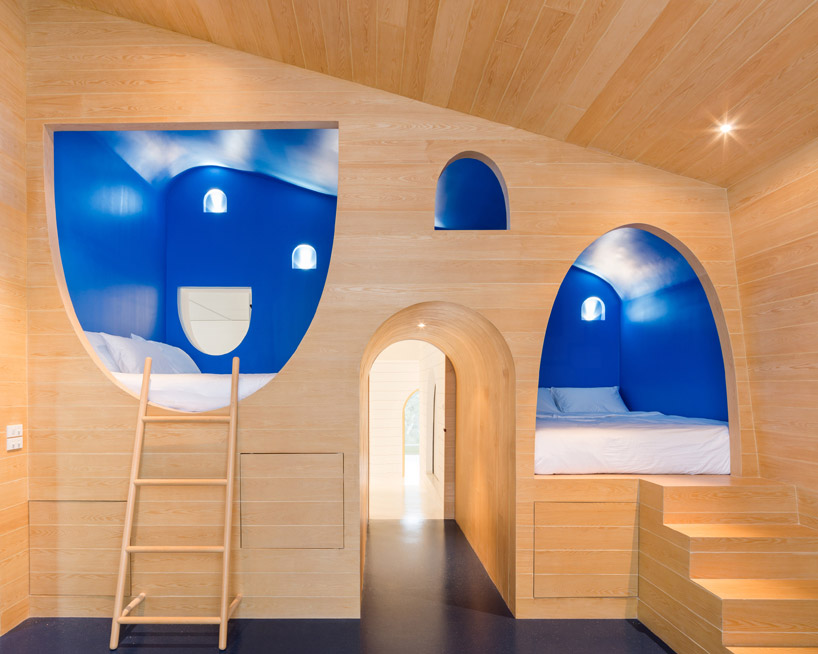 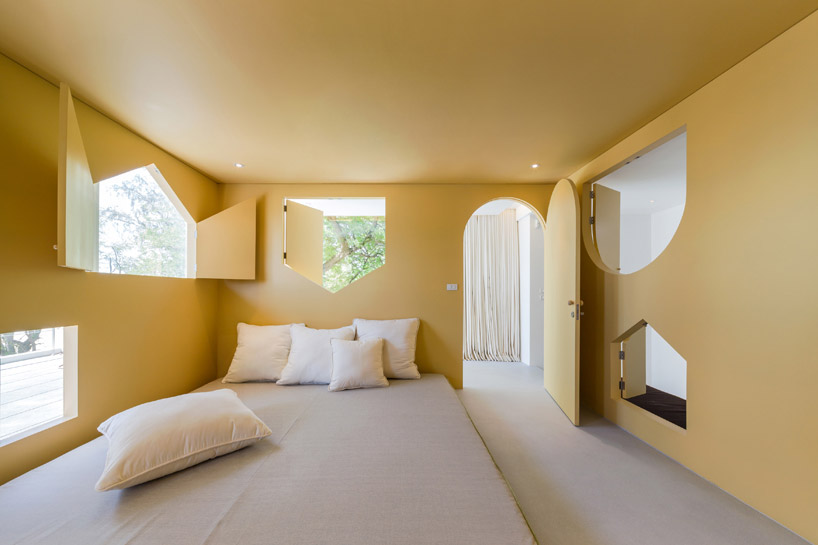 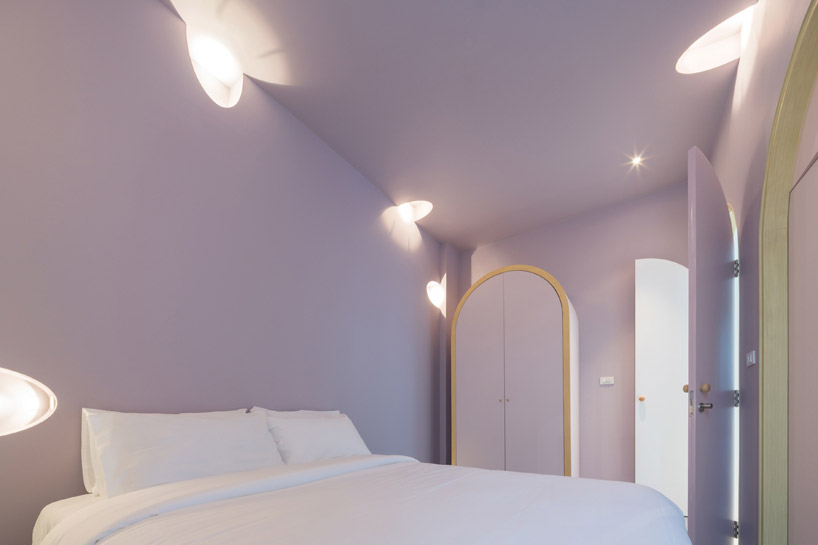 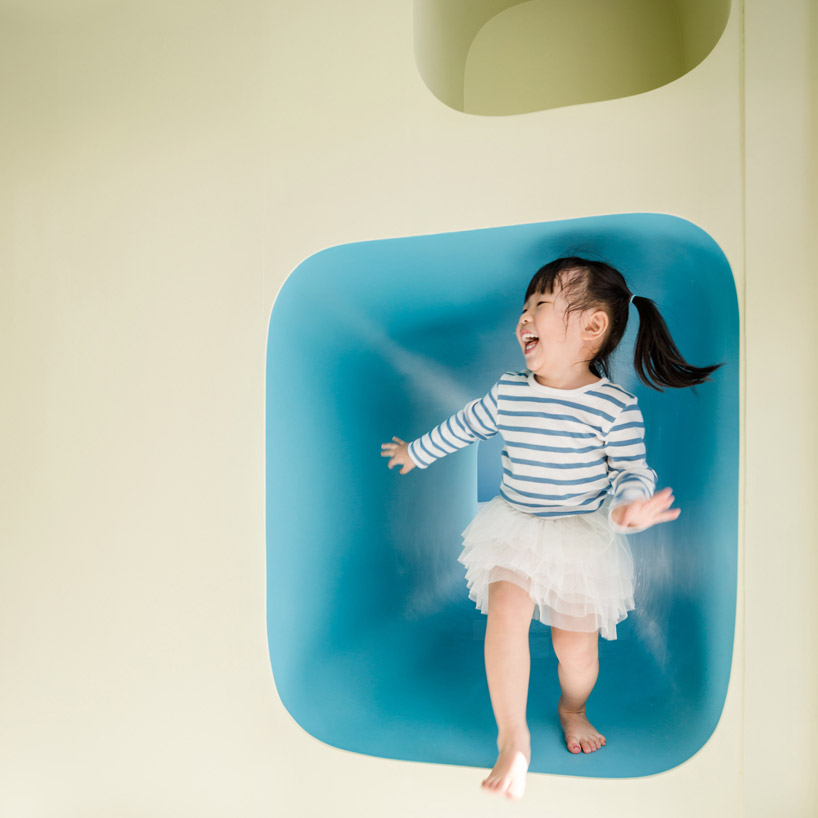 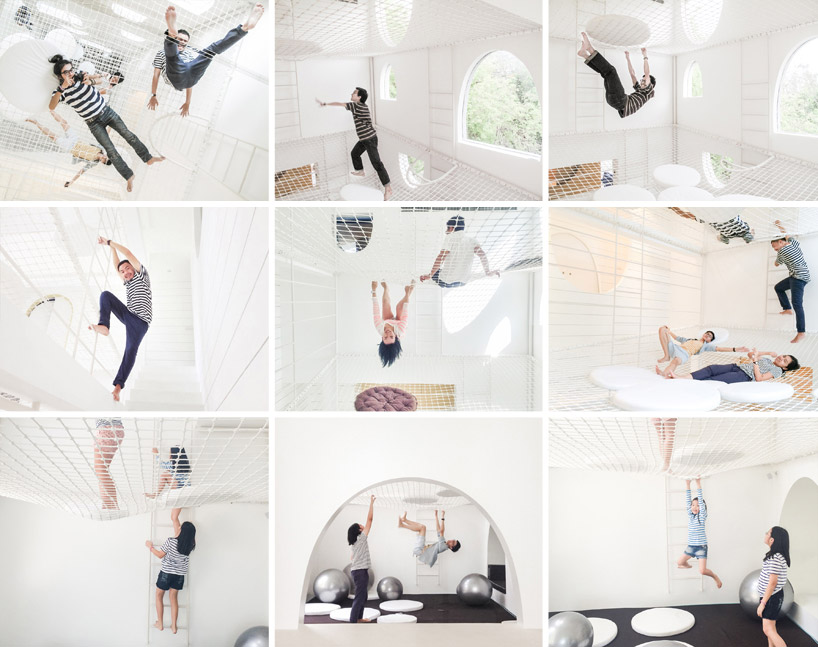 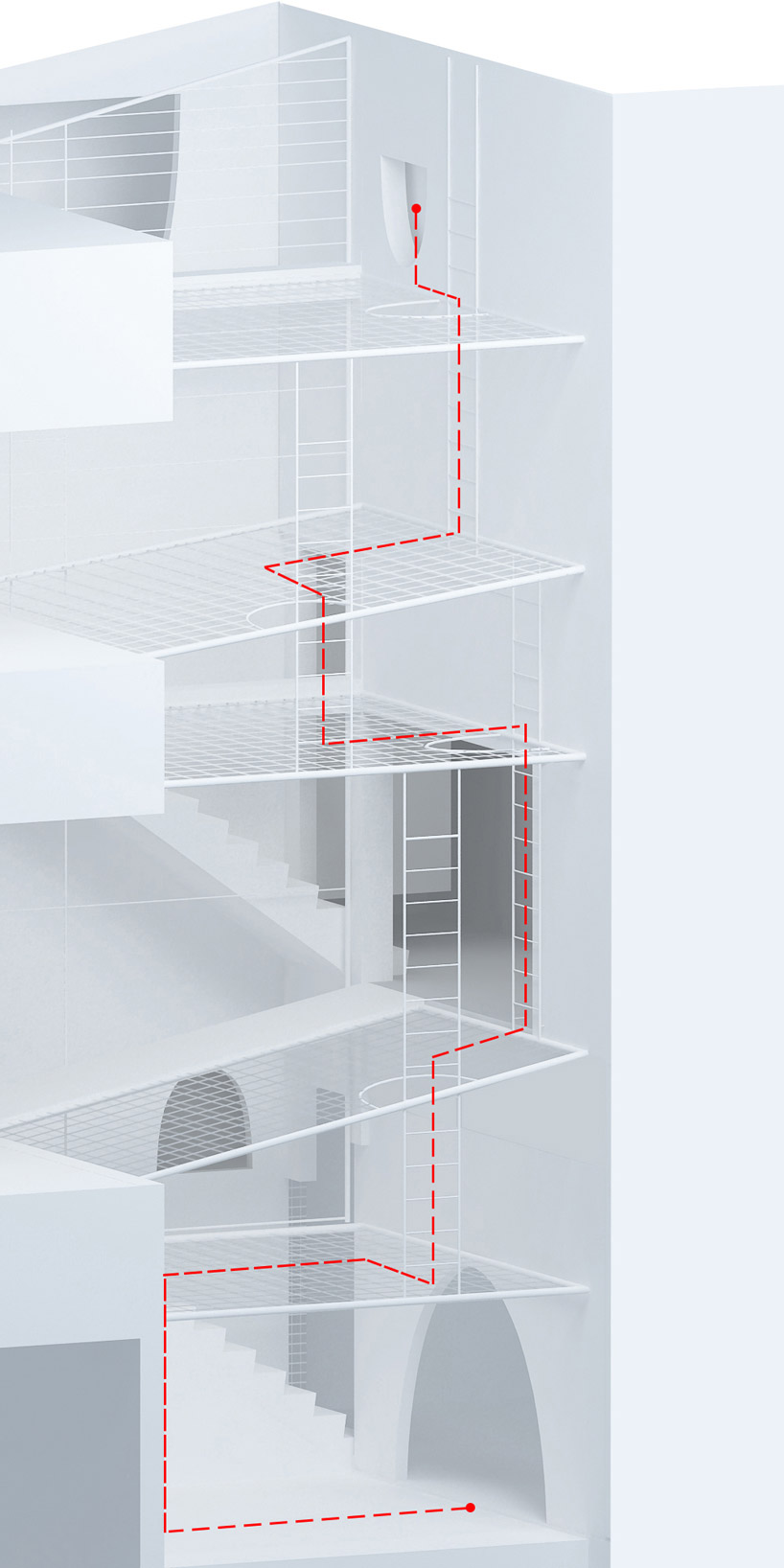 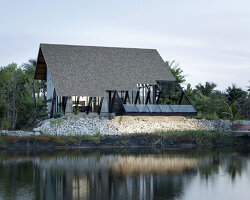 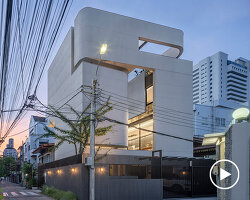 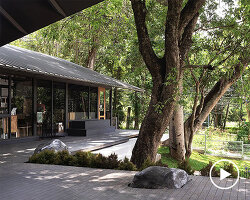 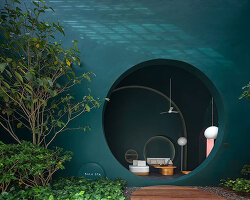 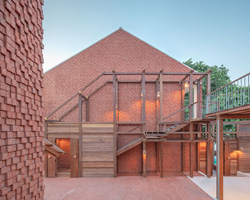 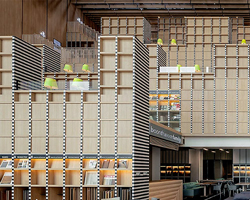 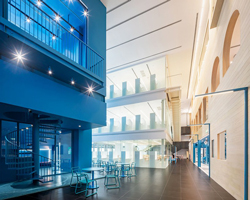 Nov 07, 2019
onion designs the samyan co-op as a 24-hour reading and working space in bangkok 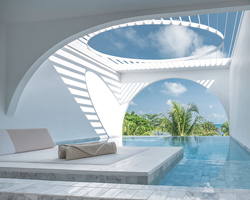