in a bid to reduce the ecological footprint of street lighting, product design student tobias trübenabacher has developed ‘PAPILIO’, a wind-powered street lamp that switches on only when it’s needed. created for his graduation project at the university of the arts in berlin, PAPILIO hopes to tackle light pollution and reduce greenhouse gas emissions. 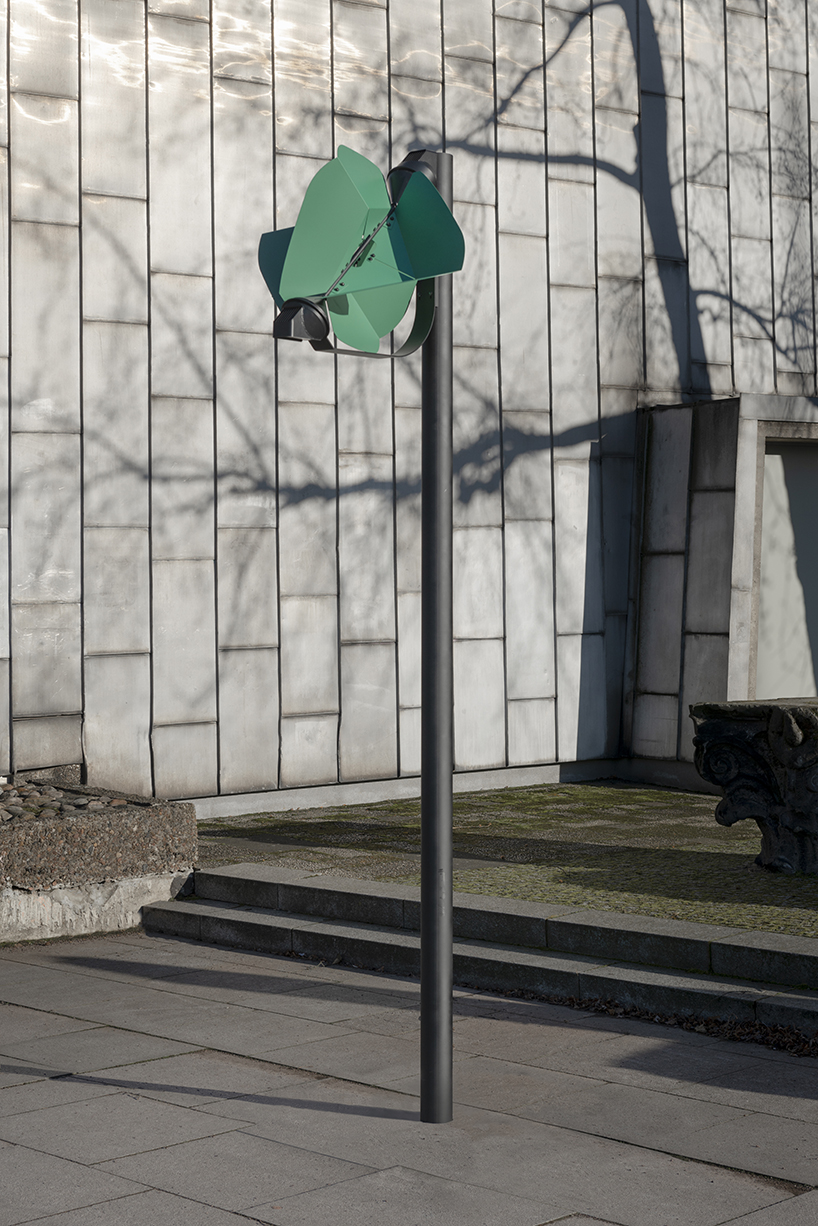 when first developing the idea, trübenbacher looked at the growing potential for utilizing wind power, particularly in city streets, as well as the negative impact of intensified artificial light in densely populated areas. ‘light pollution not only has bad health effects on humans, like causing sleep disorders, depression, cardiovascular diseases, diabetes and cancer, but has also a serious impact on flora and fauna. extinction of species, orientation loss of migratory birds, significant disorder for fish migration, as well as disturbed biorhythms of plants like for instance delayed leaf shedding, are only a fraction of these consequences. it is estimated that currently in germany alone, in one single summer night around 1.2 billion insects die because of street lighting,’  explains trübenbacher. 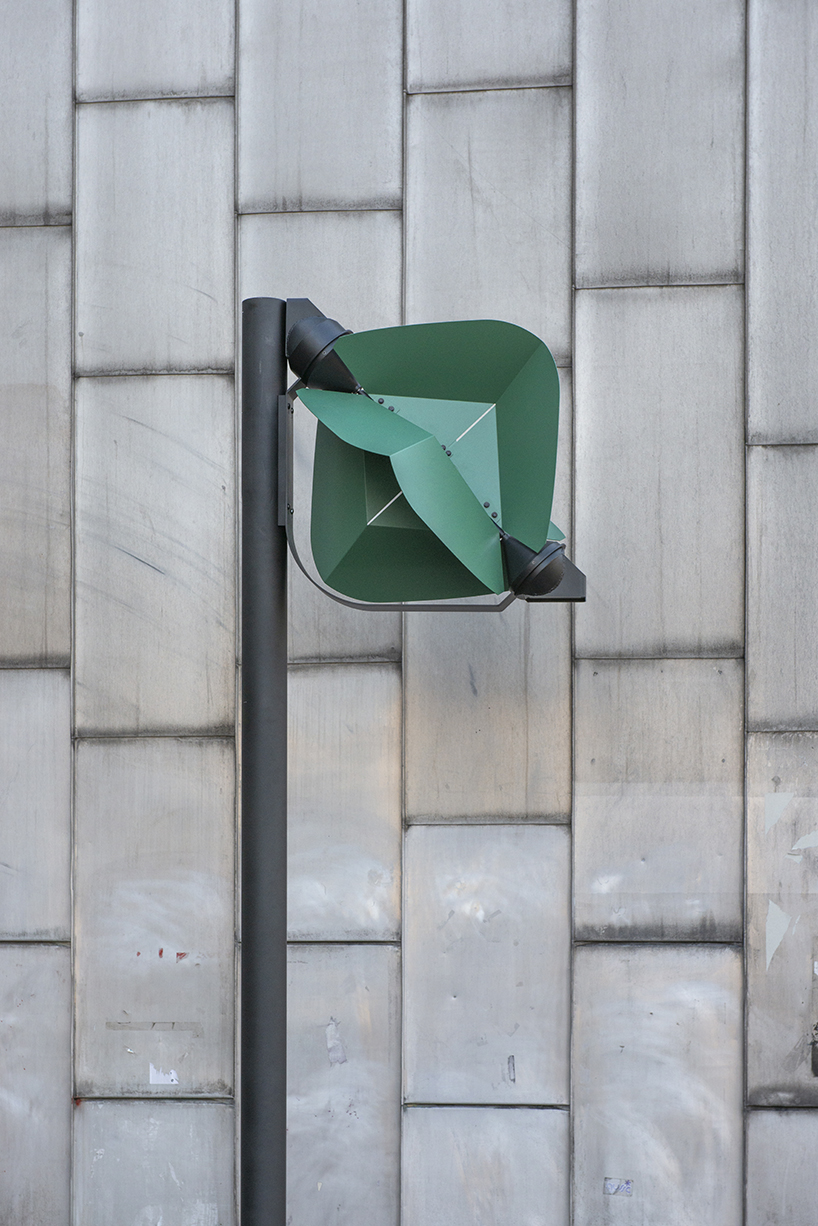 unlike traditional street lighting, PAPILIO generates electricity with an integrated wind generator. an integrated savonius rotor, made of folded sheet metal and connected to a 300 watt generator, is used to produce climate-neutral energy. for its operation, wind direction is irrelevant and due to its diagonal orientation, the rotor works with vertical (natural wind) as well as horizontal air streams (e.g. airflow caused by traffic). 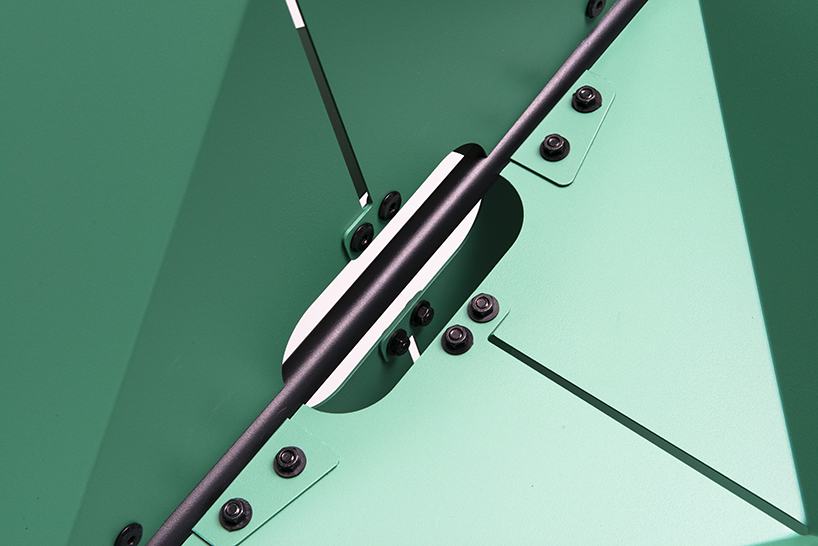 a rechargeable battery stores the generated electricity and can thus also bridge periods of calm. this makes it possible to operate PAPILIO completely autonomously in windy areas without the necessity for expensive underground electricity infrastructure, which offers benefits and new opportunities particularly for remote regions. alternatively, the product can also be connected to an existing power grid in order to feed surplus energy into the network during strong winds. the product is designed as a ‘full-cut-off lantern’, only emitting light downwards

in order to minimize light pollution, the product is designed as a ‘full-cut-off light’, only emitting light downwards with a beam angle far below the horizontal. the used light spectrum is less attractive to insects due to a lower blue component and a warm color temperature of 2800 kelvin. to reduce the harmful impact of artificial light even more, the street lamp provides an infrared sensor, activating the light only when it is actually needed. 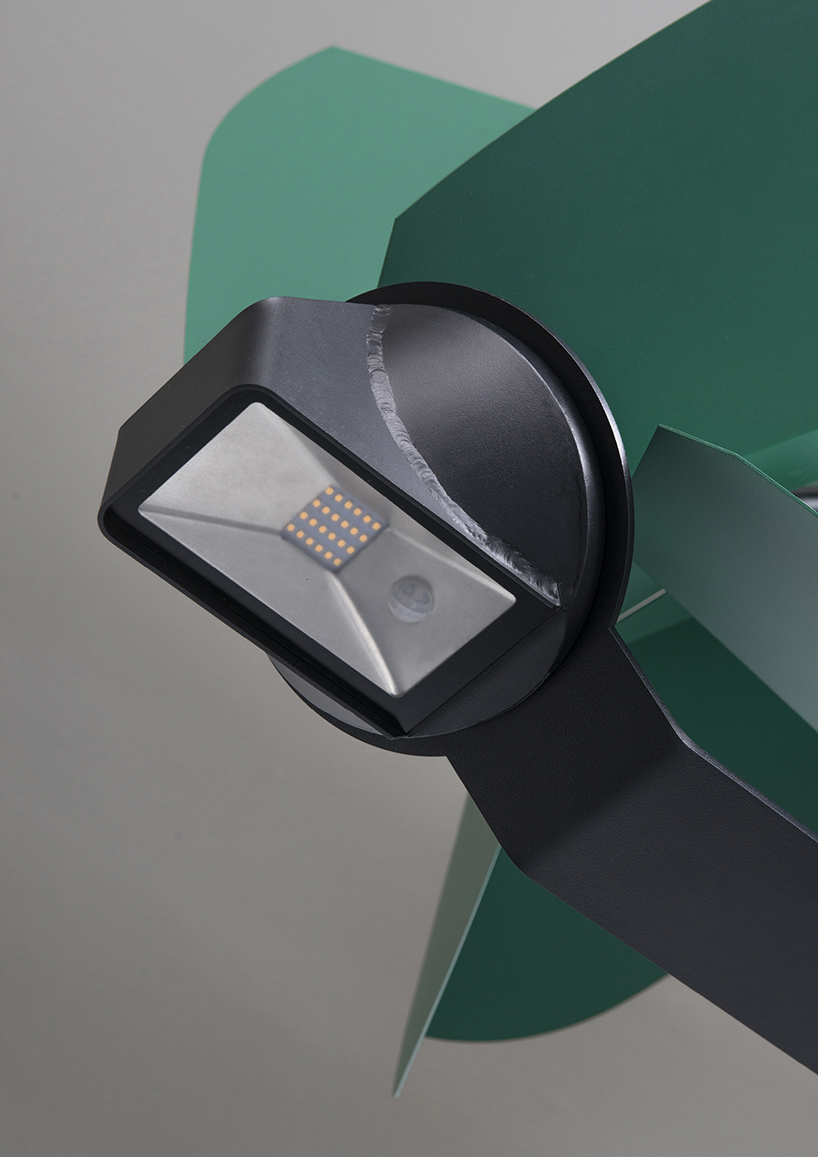 using an infrared sensor, the light is automatically activated only when needed

besides the option to mount the lamp on a regular mast, there is also the possibility to attach it to a house wall or any suitable architectural element. therefore, there are two possible mounting options: pointing downwards to create a vertical light cone illuminating the area directly below the luminaire, or the other way around to generate an obliquely incident light with a larger-area illumination. 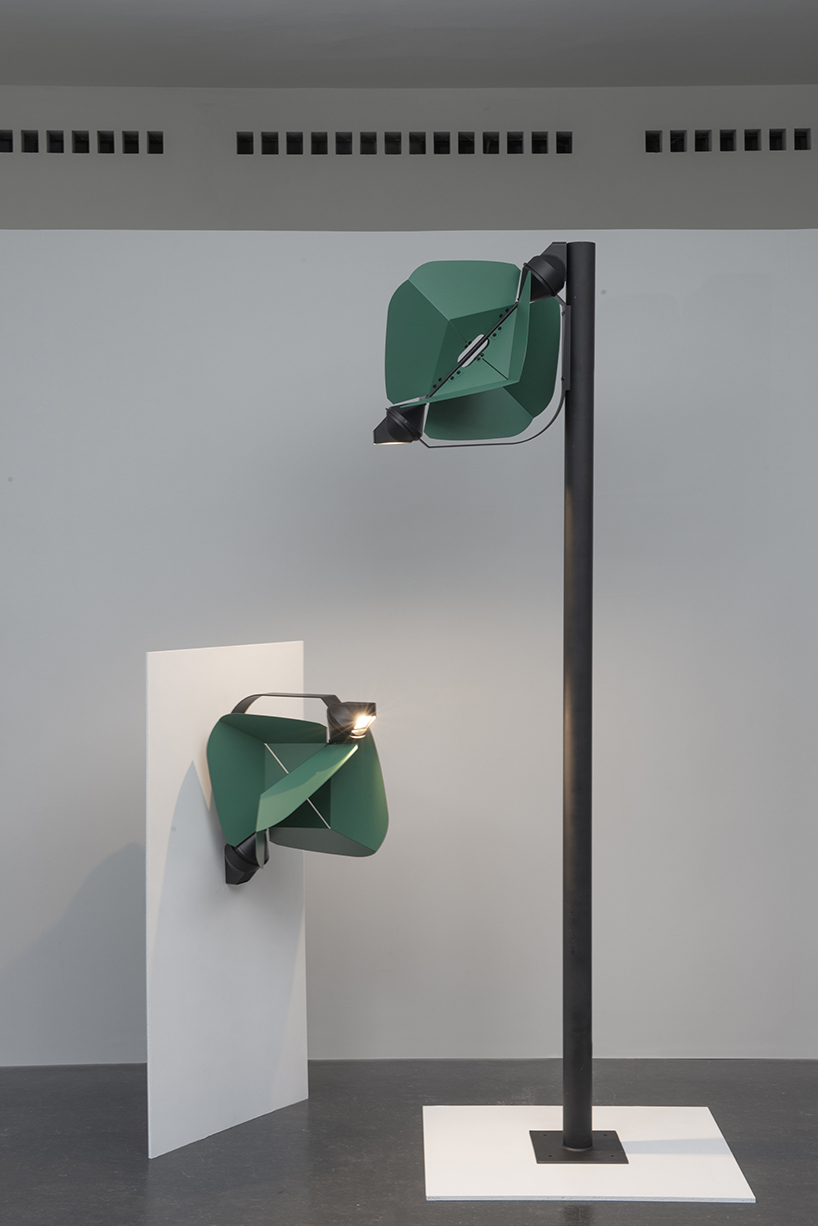 lantern masts provide an ideal prerequisite for generating wind energy since both their stable anchoring in the ground and their height are ideal for attaching small wind turbines, as close-to-the-ground winds are strongest at a height of 3 to 6 meters. moreover, besides natural wind, street lamps are usually surrounded by numerous other, unexploited, anthropogenic energy flows, like the displaced air from passing cars, buses or trains. 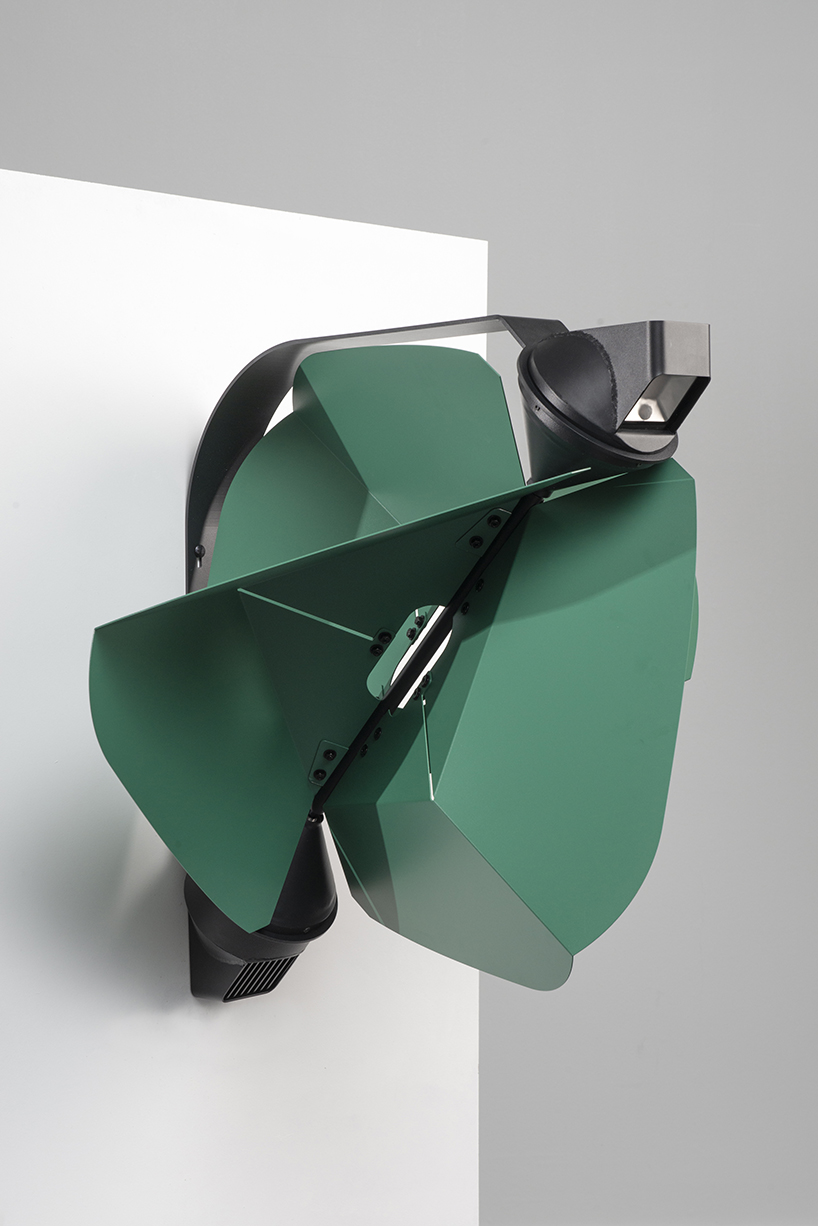 besides the option to mount the lamp on a mast, there is also the possibility to attach it to a house wall or any suitable architectural element

against this background, the PAPILIO street lamp functions as a ‘prosumer’ for climate-neutral cities of the future. it operates not only as a ‘consumer’ but at the same time as a ‘producer’, generating the energy it consumes or even beyond that, feeding surplus energy into energy networks. 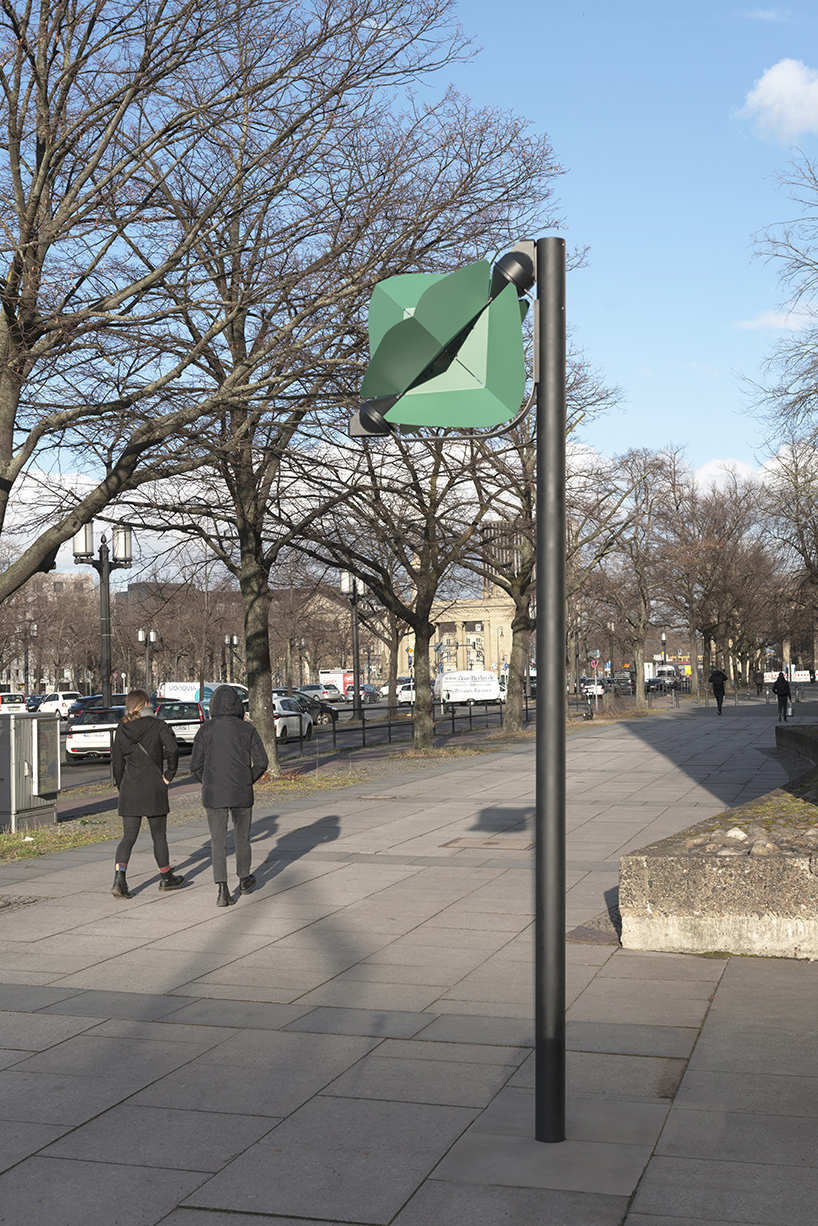 PAPILIO means butterfly: the shape and rotation are reminiscent of a flying moth

the aesthetics of PAPILIO is designed to enrich streets, walkways and city squares — both during the day and at night. the street light materializes the process of creating energy. the production of electricity becomes comprehensible and becomes the central element of the product. just as lanterns create the character of streets and squares, PAPILIO is envisioned as a public sustainability statement that motivates residents to take part in transforming our cities into climate-neutral, future-proof environments. PAPILIO is envisioned as a public sustainability statement 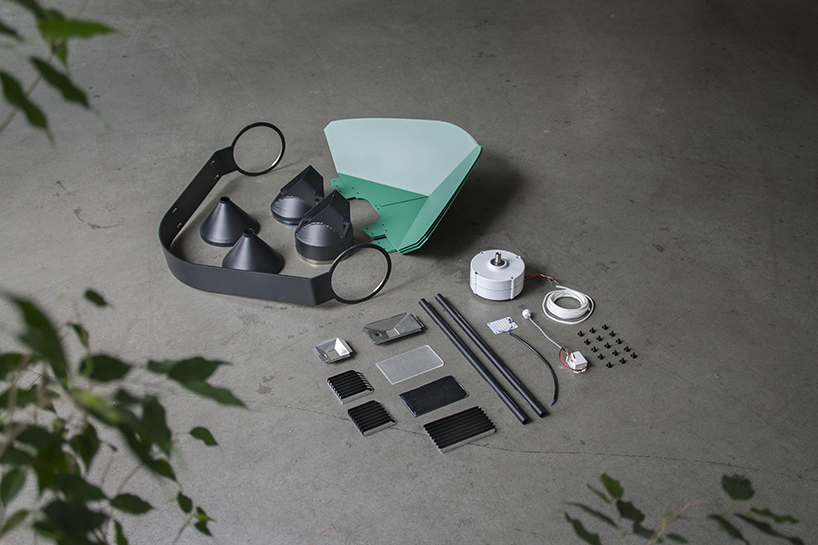 overview of the components integrated into one street light 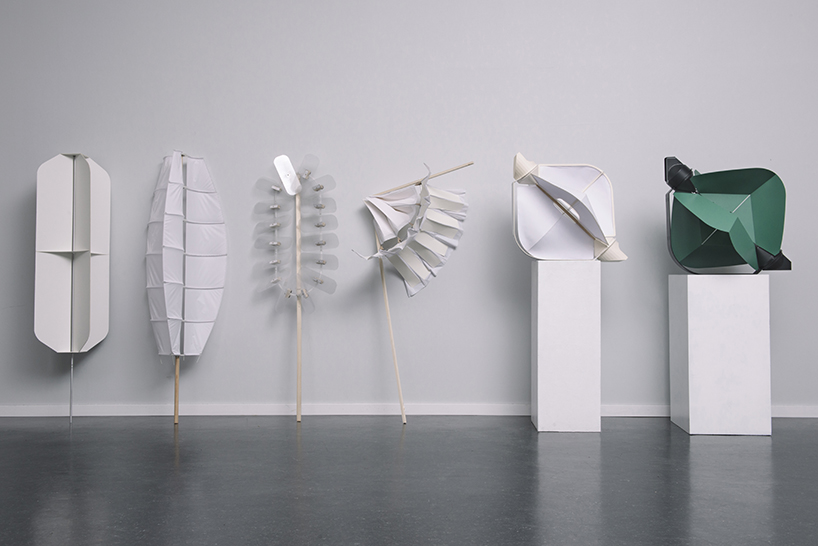 vertical wind rotors have decisive advantages for urban areas: compared to horizontal equivalents, they are quieter, more space-saving, less dangerous, and, above all, the wind direction is irrelevant 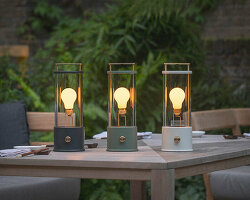 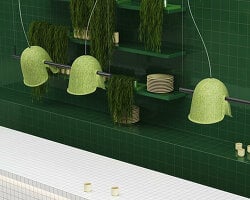