Readers are still on Earth even if they feel like they’re outside of Earth when they come across Pasta Dreams by Jamie Oliver. It looks like cooking pasta in outer space might become the next social-media aesthetics people would get behind, and Taster, Jamie Oliver, and design studio Otherway are already one step ahead of the soon-to-emerge trend. Otherway takes over the packaging design and branding of the pasta-based delivery and sends the Italian-inspired dishes to another dimension, creatively speaking.

images courtesy of Otherway and Taster

In Otherway’s branding for Pasta Dream by Jamie Oliver, imaginations run wild. Jamie Oliver and the chefs cook in a floating kitchen among pink clouds. Another chef has his eyebrows crunched from focusing so much on tossing his pasta in the pan, almost dismissive of the galaxy surrounding him. The take-out containers and paper bags are printed with swirling pastel lines, exploding clouds, and hanging fettuccine. Everything appears psychedelic, so bright it draws the eyes into the visuals.

Otherway writes in its case study that the boiling pasta-like shapes of the logo hint at the theme of nostalgia. The team adds sepia tones in the color palette to underline the 1970s retro theme. Their disco-gaming is full-out as they usher mood board dreamscapes through collages into the brand’s recent design. Customers are whisked out of the Earth with Otherway’s hallucinatory and otherworldly design (not literally, but at least they’ll feel like they’re being hypnotized by the bubblegum aesthetics). 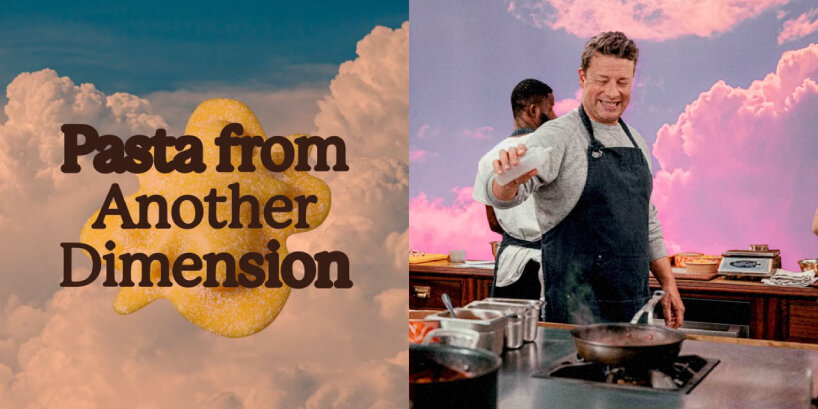 Off with the design presentation and onto the menu, design studio Otherway also touches on the list Jamie has curated for Pasta Dreams. First, the pasta names have been reinvented (proud Italians, look away) with Cacio x Carbonara Caserecce, Vodka Arrabbiata Casarecce, Margherita Gnocchi Bake, and Beef and Chianti Agnolotti, to name a few. Tiramisu retains its name, so that’s good.

The way Taster describes Pasta Dreams by Jamie Oliver amplifies the experimental take of Otherway on the branding. The pasta-delivery company says that the project brings customers Italian-inspired dishes that are ‘out-of-this-world, all dreamed up by Jamie Oliver. We’re talking next-level fresh pasta, beautiful-filled pastas and delicious bakes, not to mention some seriously good sides and a lovely pudding, all just a click away.’ 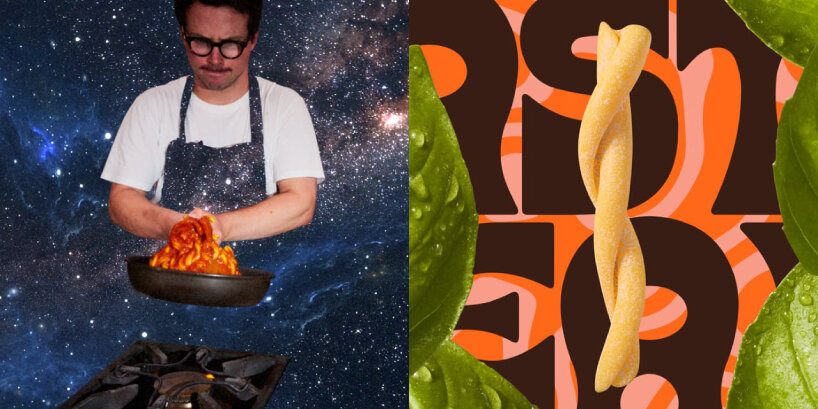 Aside from the design and the menu, photography of cooking processes fails to escape from the overhauling of Otherway as the digestible and eye-catching video content the team produced for Pasta Dreams embodies those food documentaries seen on streaming sites.

‘The overall tone of the brand marries the weird and wonderful with mouthwateringly tasty, offering a true celebration of what Jamie Oliver can offer a new audience who, with so much choice in a saturated market, demand a renewed, creative approach to food delivery brands,’ Otherway team writes in its case study. 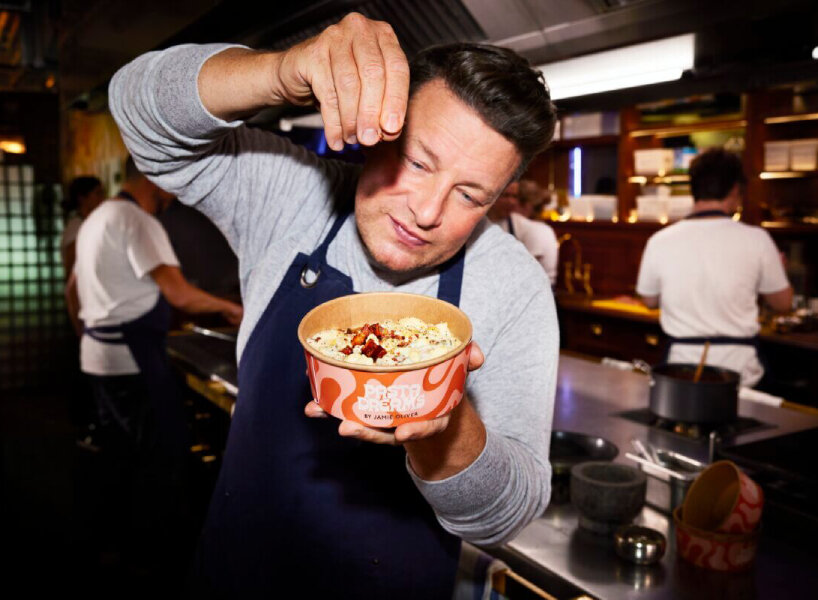 The trio partnership came about to reimagine what a pasta-based delivery brand could be. Otherway takes a bold move on the food menu and strategy as its belief in challenging customers’ preconceptions of delivery food. ‘We set out to create a brand that pushes the boundaries of an Italian-themed food concept. Marking a departure from Jamie Oliver’s traditional audience demographic, Pasta Dreams has been designed to appeal to a younger audience,’ the team writes in its case study.

For customers who are on board with the trippy and psychedelic ride in a 1970s-retro way, they can pop into the limited-time-only pop-up shops of Pasta Dreams by Jamie Oliver in London and Paris from October 13th to January 1st. Spending the very first day of the year inside one of these cotton-candy-colored shops seems like a unicorn dream, especially after partying all night for New Year’s Eve. Just in case readers forget, they serve just Italian-inspired dishes. 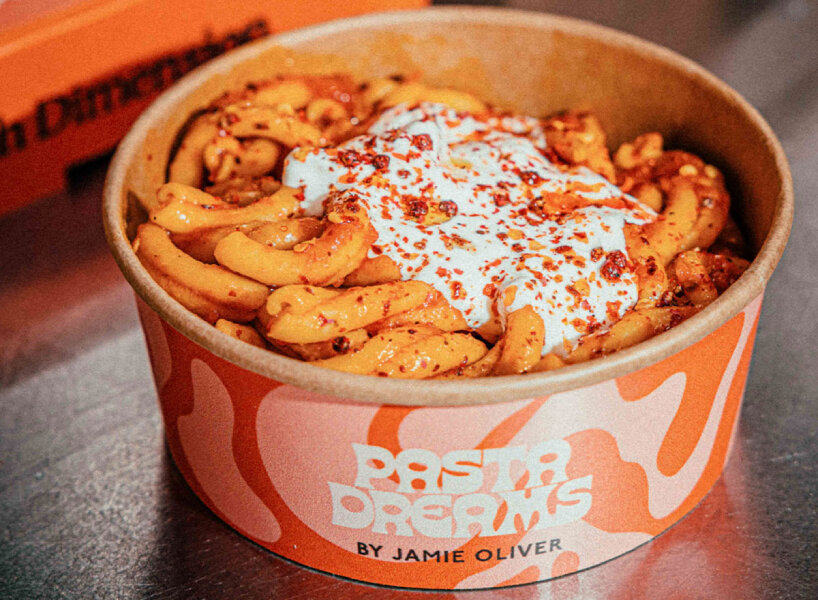 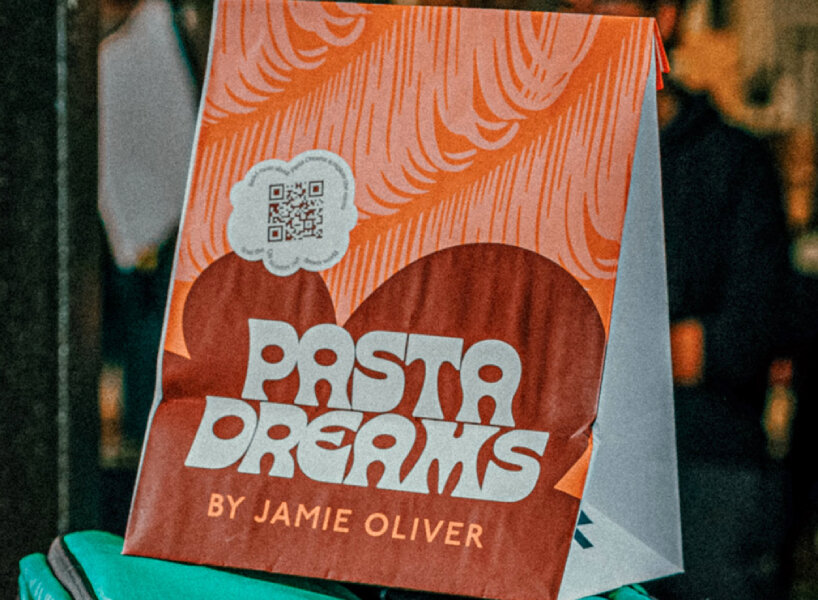