‘jurema action plant’ by ivan henriques, to be exhibited for milan design week 2012 as part of KABK’s exhibition ‘the shepherds of stuff’

‘jurema action plant‘ by brazilian multimedia artist ivan henriques lets a plant ‘run away’ from stimuli, offering it some of the reactive capacity that humans have in their environment. the piece is on exhibition for milan design week 2012 as part of ‘the shepherds of stuff‘, a student and graduate show by the royal academy of art the hague (KABK) that investigates the ‘new nature’ of human and environment interactions.

henriques describes ‘jurema action plant’ as ‘a hacked wheelchair’ that reads the electromagnetic field of a plant to determine when it is being touched. although plants lack nerves (like animals) or wires (like machines), they respond to stimuli by the transfer of electrical signals through its cells.

the so-called ‘sensitive plant’, mimosa pudica, responds to what it perceives as environmental threats by closing its leaves when provoked, even by just a light touch of a finger. in ‘jurema action plant’ , a signal amplifier detects when the plant is engaging a defense response, triggering via a custom circuit board the robotic holder to move away from the location of the stimulus. the mobile unit also contains a watering system to nourish the mimosa. 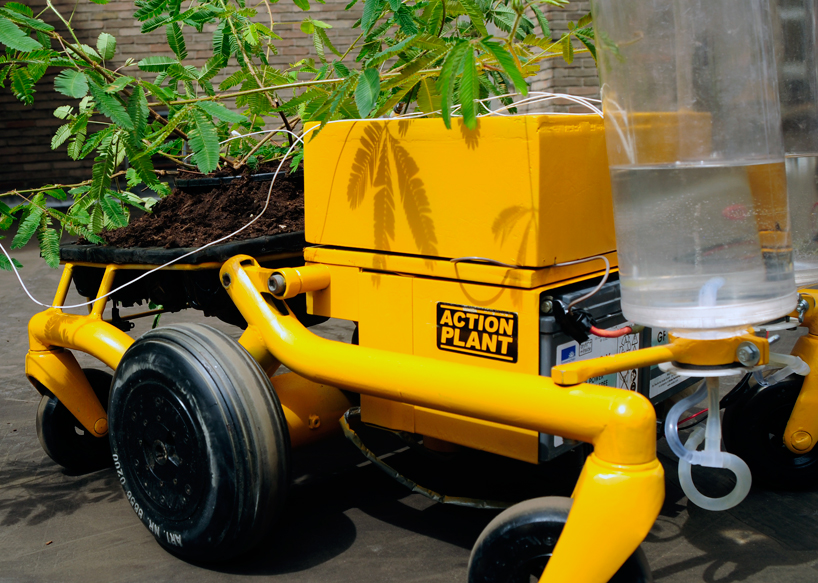 closer view of the ‘action plant’

demo of ‘jurema action plant’ on exhibition in florence, 2011