the ‘100% suspended’ light is an extension of ross lovegrove ‘s   ‘100%’ lamp  designed for italian brand danese . a new version of the lamp is shown at the danese booth on the milan fairgrounds. the new light no longer uses an electronic, serigraphed ABS card. instead it features the same printed circuit as the suspension lamp, which runs along the inner part of the lamp’s arm rather than the exterior as in its earlier edition. 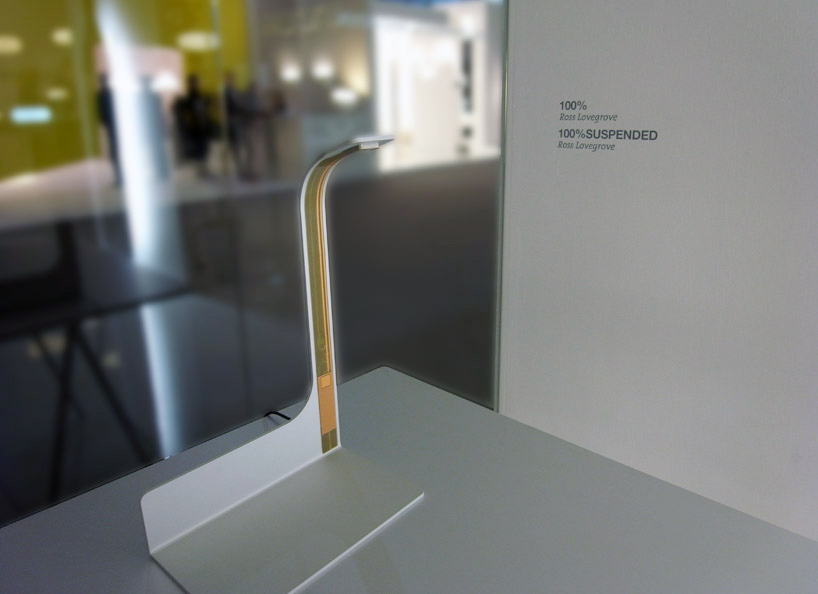 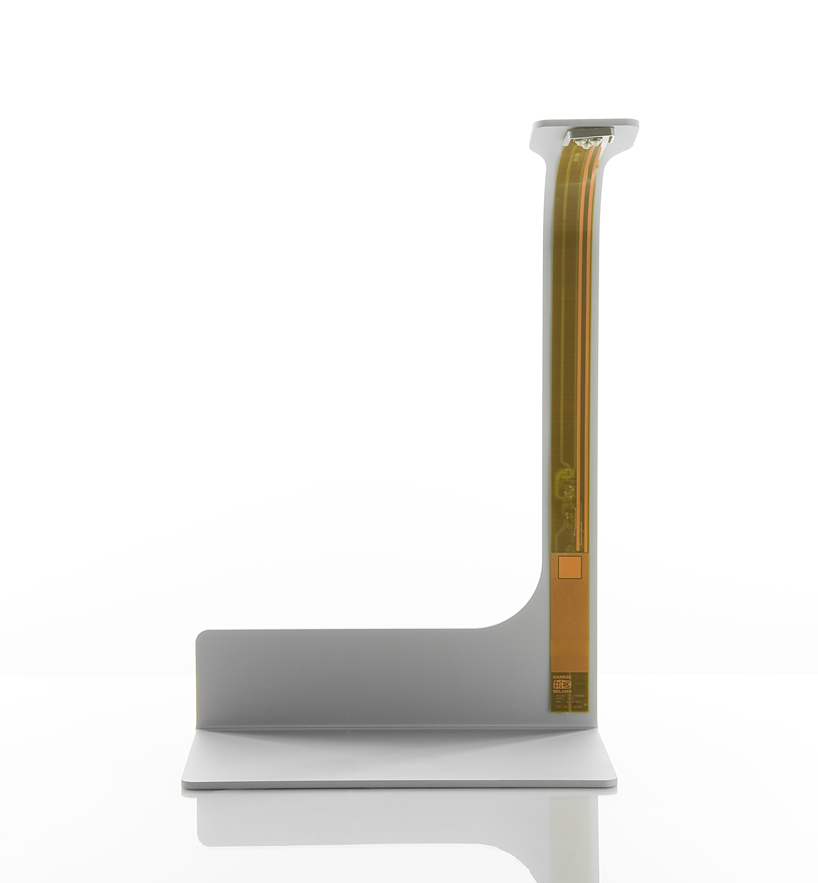 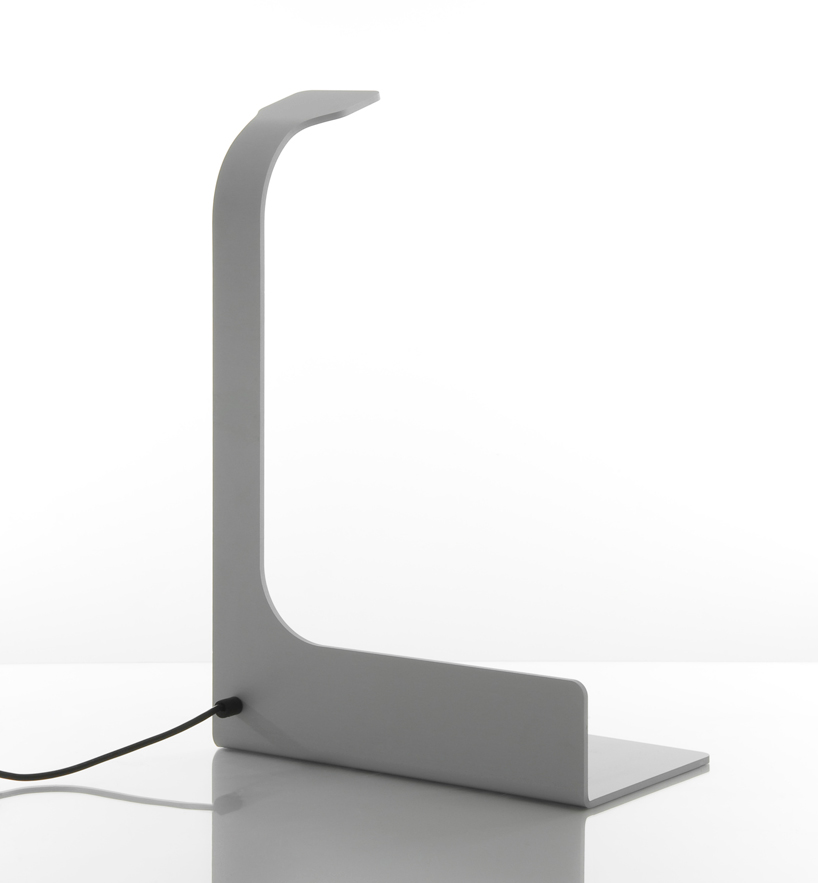 back view image courtesy of danese 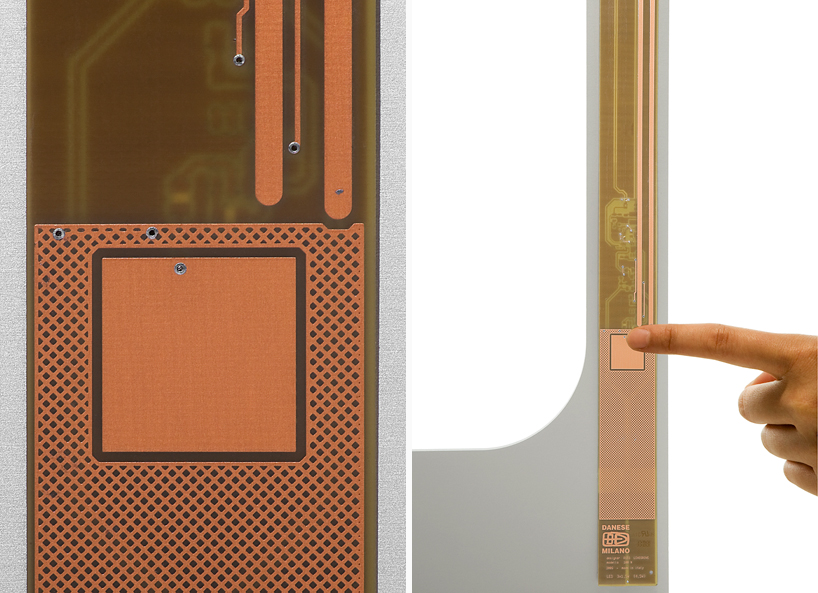 detail of the touch dimmer images courtesy of danese 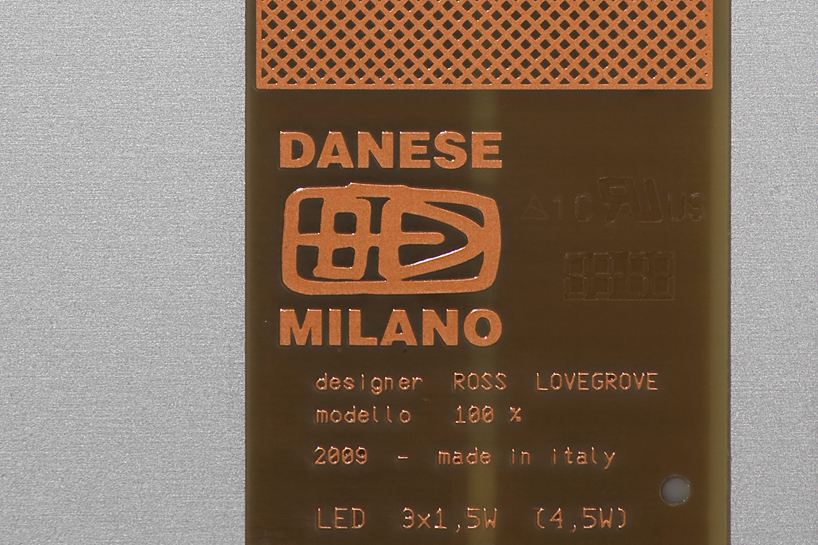 the ‘100% suspended’ lamp is a suspension lamp that features an aluminium body with flexible printed circuits with a touch dimmer presented within the company’s showroom for milan design week 2011. 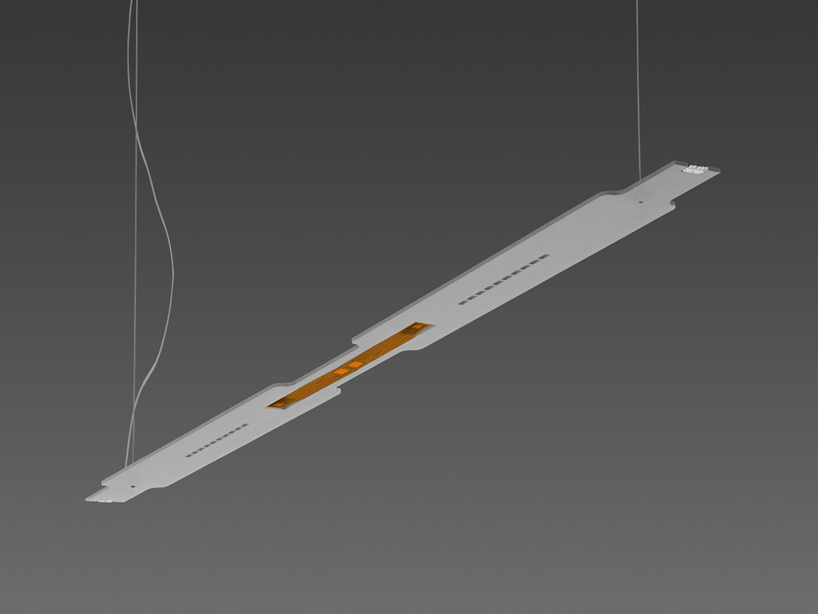 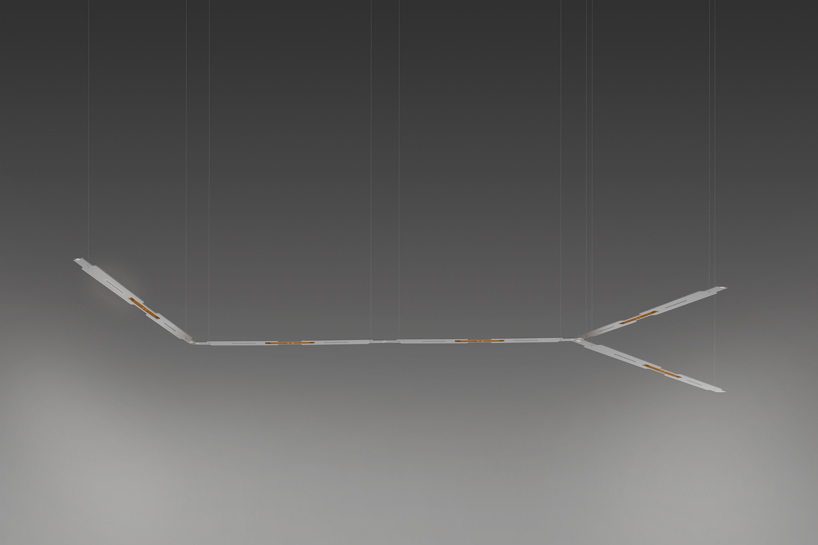 based on a patented high technological suspension system, the luminary is simple. it is composed of a module that can function alone or be inserted into other configurations and appreciated as a system. it fits connecting elements among the various parts at 180, 120, 90 angles so as to give the opportunity to arrange light freely. 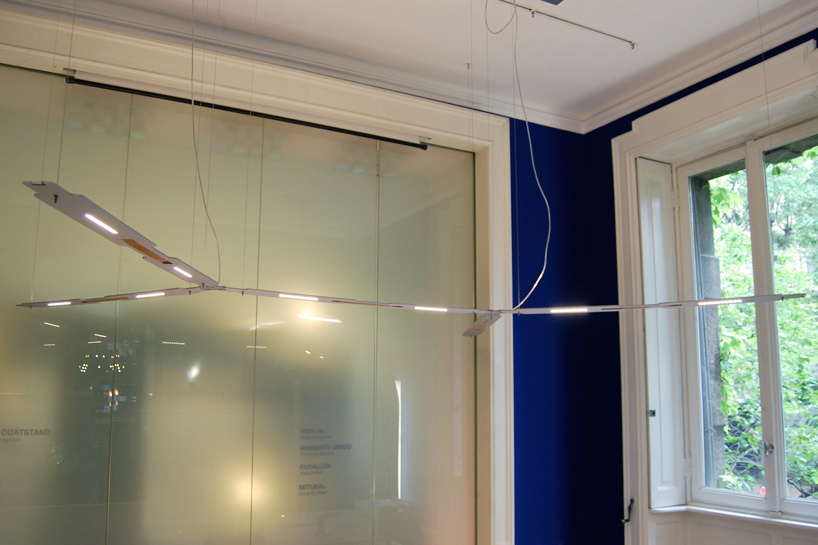 its basic form is a strip of light, made from an aluminium sheet that is only 5mm thick, 10cm wide and a little over a meter long, providing ideal illumination thanks to the power LEDs mounted onto the flexible printed circuit that regulates light emission. 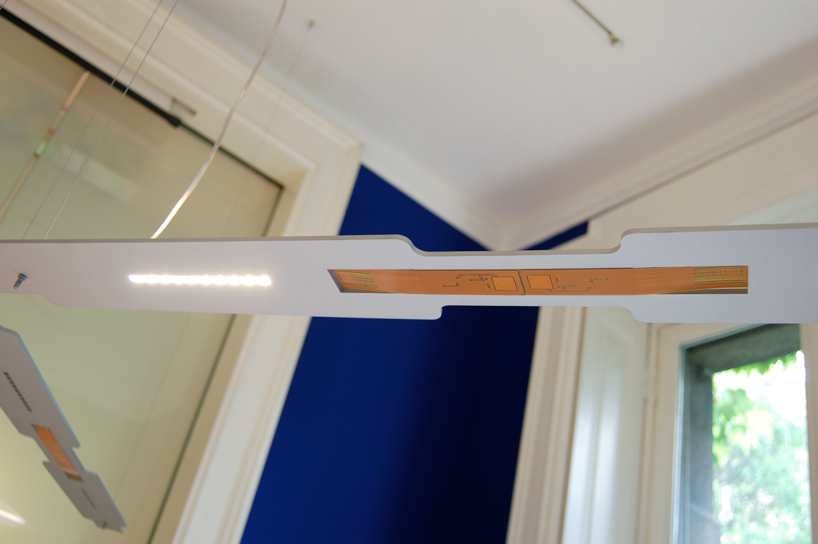 the central part of the light hosts the components, while the lateral holes modulate the direct light emitted by the LEDs, ensuring a dark light emission in compliance with applicable laws and variations. 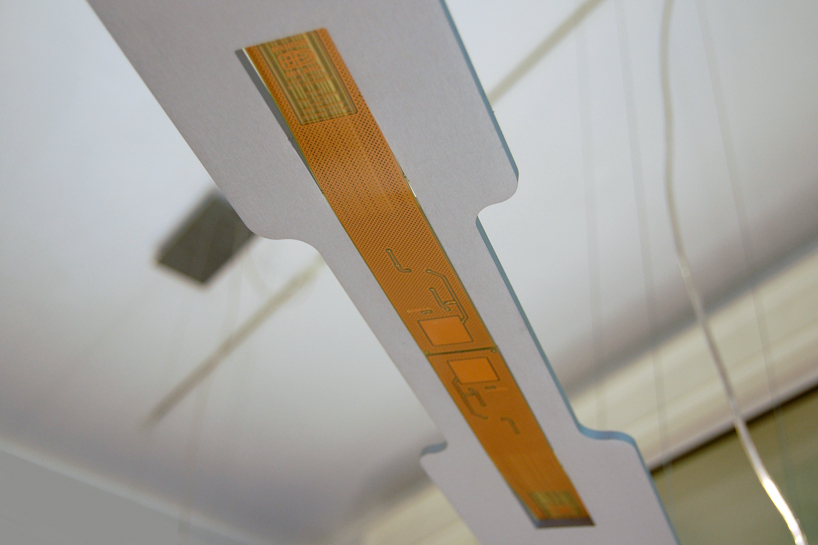 the circuit runs along the top of the light fixture, but within the central part, it descends through a thin cut in the body of the lamp, showing again in the lower part introducing a new way to modulate luminous intensity. an unusual product-feature, already adopted by danese for other lights, allows the user to regulate light emission touch a suspension light dimmer placed on the body of the lamp. 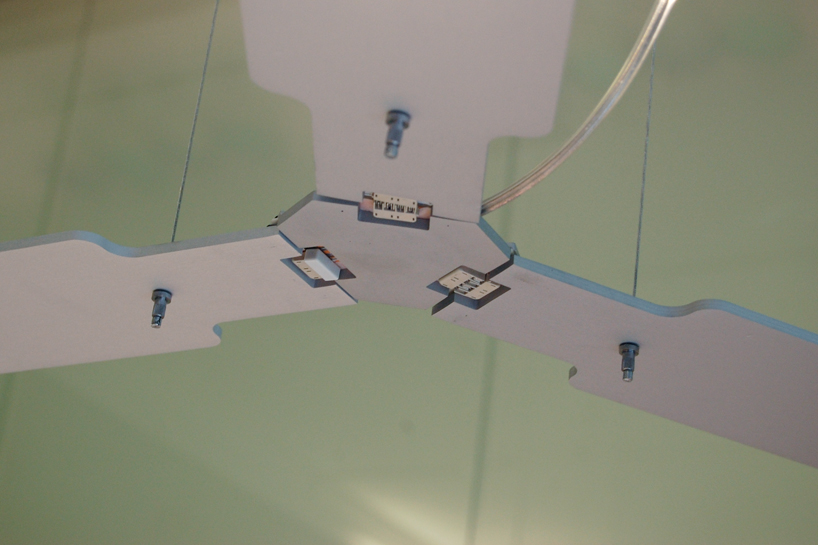 the impact of the entire manufacturing and distribution processes for ‘100% suspended’ is limited. little material is used, the procedures are simple, the different components are easy to separate, the aluminium is recycled and recyclable, and the weight and bulkiness are bare minimum. 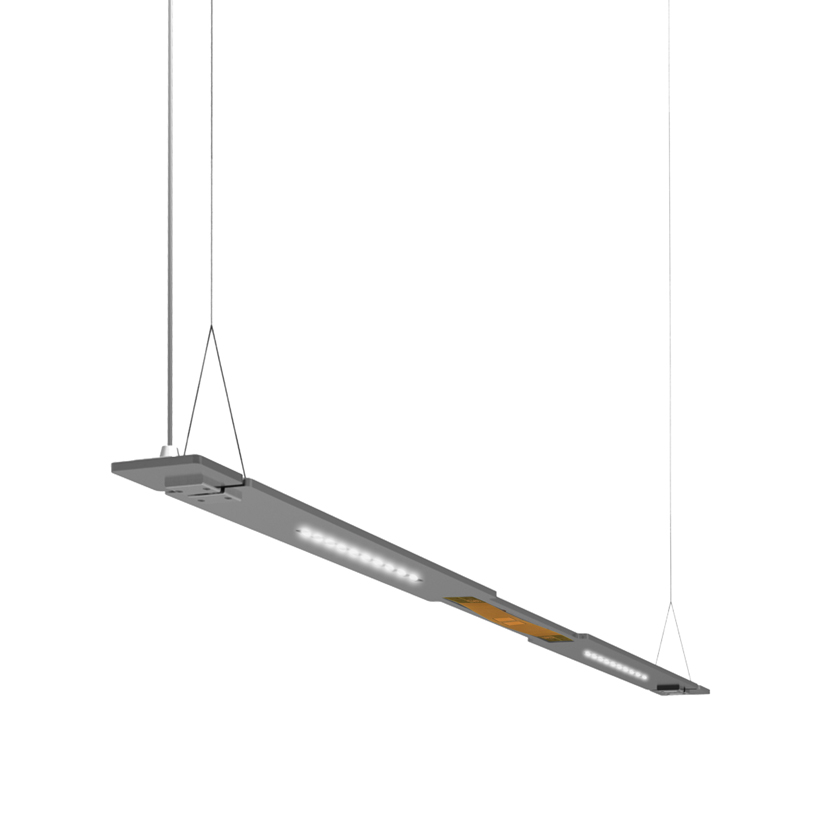 singular component of the ‘100% suspended’ light image courtesy of danese 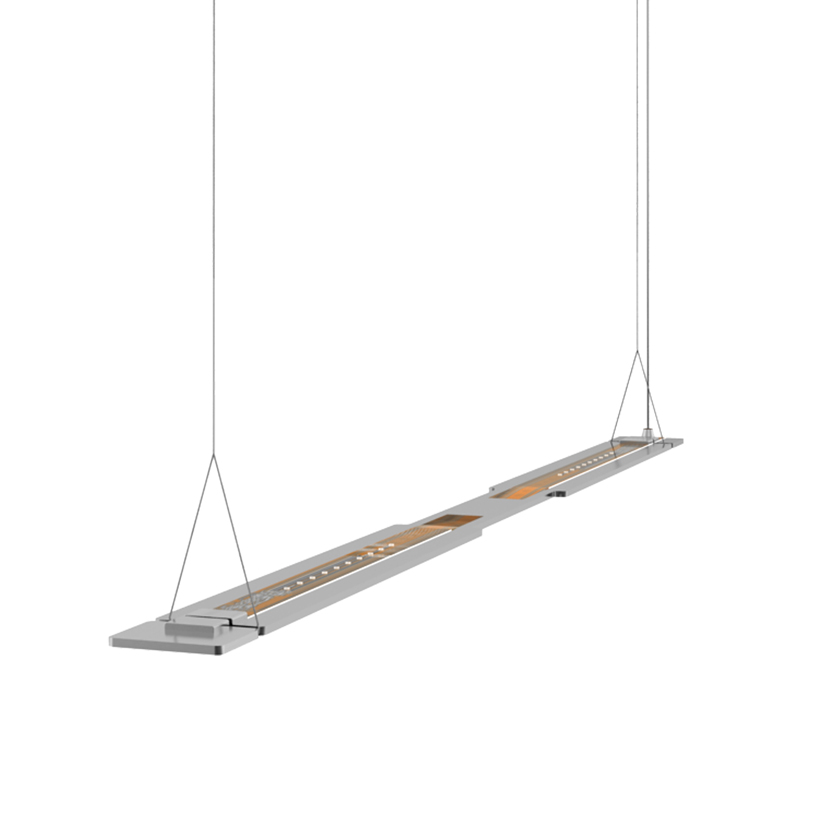