if the phrase ‘salmon cannon’ doesn’t ring a bell then you definitely haven’t seen the latest viral video to take the internet by storm. thanks to a clip that has resurfaced on twitter via cheddar, people on social media are going crazy for a bemusing ‘fish tube’ that fires fish from A to B. the design by whooshh innovations has actually been in use since back in 2011, but conveying the power of the internet, the video has leapt into 2019’s public consciousness.

the system itself has been developed not just for our amusement but to address a real problem. with the number of dams in the united states, the design transports salmon from the water below a dam to the spawning grounds above so they can safely reproduce. comprising of a clear channel made of soft flexible tubes, the passage can span 1700 ft (515 m) and can transport up to 40 fish per minute.

This salmon cannon transports the fish between bodies of water. (Via @CheddarGadgets)https://t.co/2eFQceFgzv pic.twitter.com/AHK0QJMCKf

the ‘salmon cannon’ via cheddar

the system also scans and sorts fish to separate the different species, meaning native salmon won’t have to compete with others. by allowing the fish to travel between 5 and 8 meters per second, the salmon cannon vastly reduces the salmon’s journey time to get to their spawning grounds. whooshh also maintains that the system is absolutely safe for the fish despite the pressurised tube environment. with the company’s guiding principle of ‘save the salmon, feed the planet’, the viral video has actually highlighted a real environmental issue regarding fish migration – while of course providing great fodder for countless fish memes along the way. 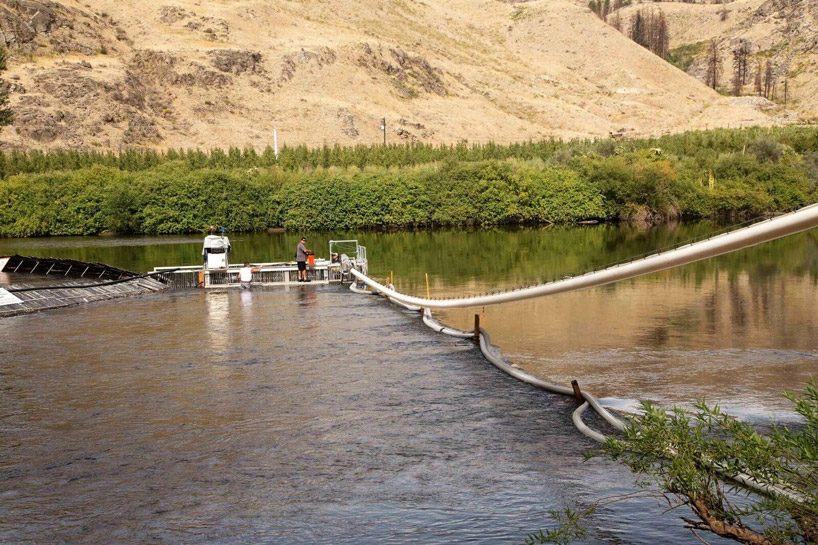