On the occasion of the Norwegian Cancer Society’s 10th anniversary Christmas Star Campaign, Snøhetta has designed decorative stars utilizing different means and materials. The stars will be sold and hung in the windows of hospitals, businesses, and households in Norway, raising money for lifesaving cancer research and spreading hope and warmth to these vulnerable groups. For this year, Snøhetta contributes to the campaign with their profession and expertise, introducing a collection of three new stars in an abstract form, reinterpreting what a star means.

The smallest one is made of paper and can be used for decorating the Christmas tree but also functions as a to-and-from note for Christmas presents. Then, a larger paper star is mainly created to adorn the windows at hospitals but can also match businesses and private households. The third one is a limited edition handmade candle holder in brass made by the traditional and highly skillful artisans at TH. Marthinsen’s factory in Tønsberg, Norway. 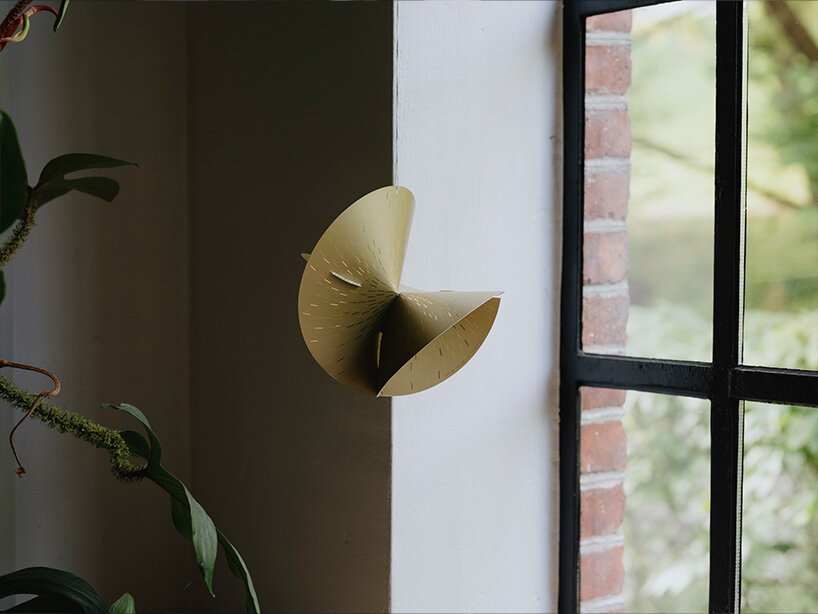 exploring the meaning of a star

For the Christmas Star Campaign, which requests the star shape to be the main protagonist, Snøhetta’s designers opted a different expression of what a star symbolizes. Therefore, the team came up with the idea of a modern interpretation of the traditionally-shaped star, maintaining the glow, reflection, and the notion a star brings with it. The result sees three different stars in a subtle way with a more welcoming and inviting silhouette. ‘The general concept of time has been a central part of the project and has been used to connect the three objects together, as it is also connecting people. It is also a concept that truly represents the goal of the campaign itself.’

‘Each star is constructed from flat circles that are then bent and put together to form a three-dimensional shape to create a presence in the space.’  One of the main targets of the designers was to follow a sustainable approach, producing all objects locally in Norway, as well as avoiding using plastic in both the stars and the packaging. By choosing paper as the primary material for two of the stars, they ensured that they are lightweight, recyclable, and accessible for most people that would like to support the campaign. Besides, they can be shipped flat, which also brings down transportation and storage emissions. When you receive the package, you can assemble the star on your own — a gesture that requires time and affection.

Connecting the shapes highlights the values behind the creative process and the attention you give rather than the object itself. In addition to selling the star in stores and online, Snøhetta has also created an online template of the star that is available to download with instructions on how to assemble it. Here you can also decide to donate what you want in return.

Snøhetta’s stars gently sway with the presence of a breeze while their material surface reflects and spreads glow from outside, embracing the surroundings with its soft shape. ‘When you are in the hospital, the notion and experience of time tend to be different, it can often feel as if time is standing still, and it is not always easy to relate to the people outside of the hospital. For that reason, the hospital star – which usually is placed in the windows in the patient’s room – is designed with the aim of creating a connection to the outside world, communicating that people are thinking of them by conveying a sense of movement and life.’ 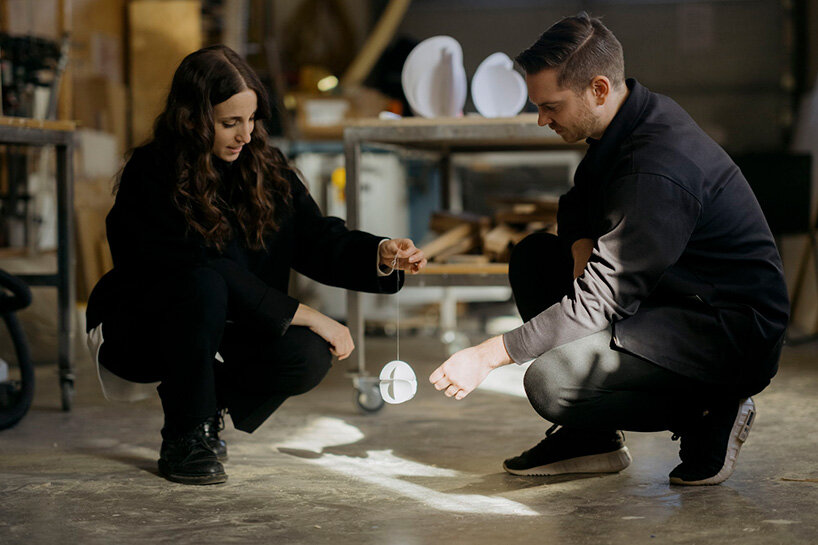 two of the stars are made of paper, to be lightweight and recyclable

The third star takes shape as a handmade candleholder crafted in highly polished brass by expert artisans. ‘The concept of time is here shown through the ritual of remembering, repeated in time. In the context of a ritual, lighting a candle is a visual representation of time passing and it is something that you can do alone or together thinking of someone you care for. The candle’s flame is in many ways like a star – it lights up when everything else is dark, it can create an emotional connection and it is beautiful in its nature. The candleholder consists of three different-sized untreated brass circles bent, polished, and assembled by hand by TH. Martinensen’s 25 expert artisans.’

‘The shape of the bent circles makes light reflect in the highly polished brass in a truly unique way and is different from every side, allowing it to be a centerpiece in the room. The mirror-like surface reflects its surroundings in a mesmerizing way. Being made in untreated brass, the notion of time and care is also reflected in the fact that brass is a living material that will change over the course of time if it is left untreated. You can always polish it back to its original state, but if you leave it be, it will age beautifully with time, lasting for generations.’ 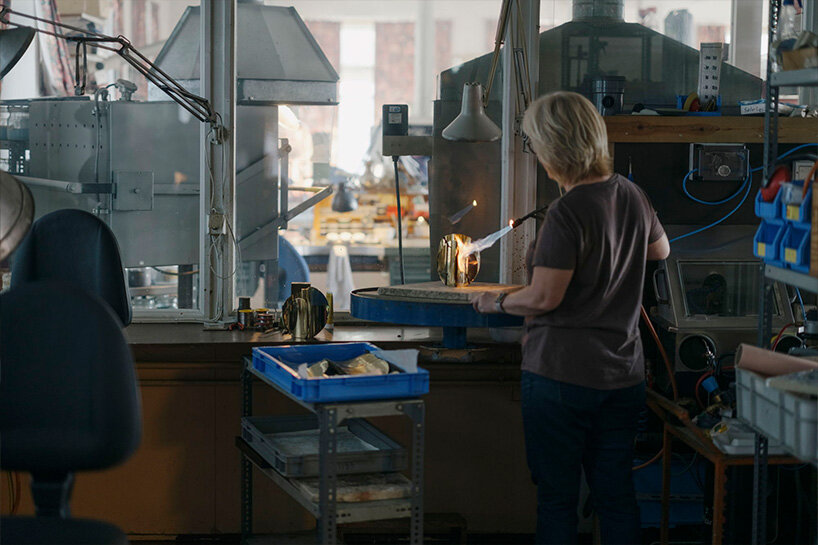 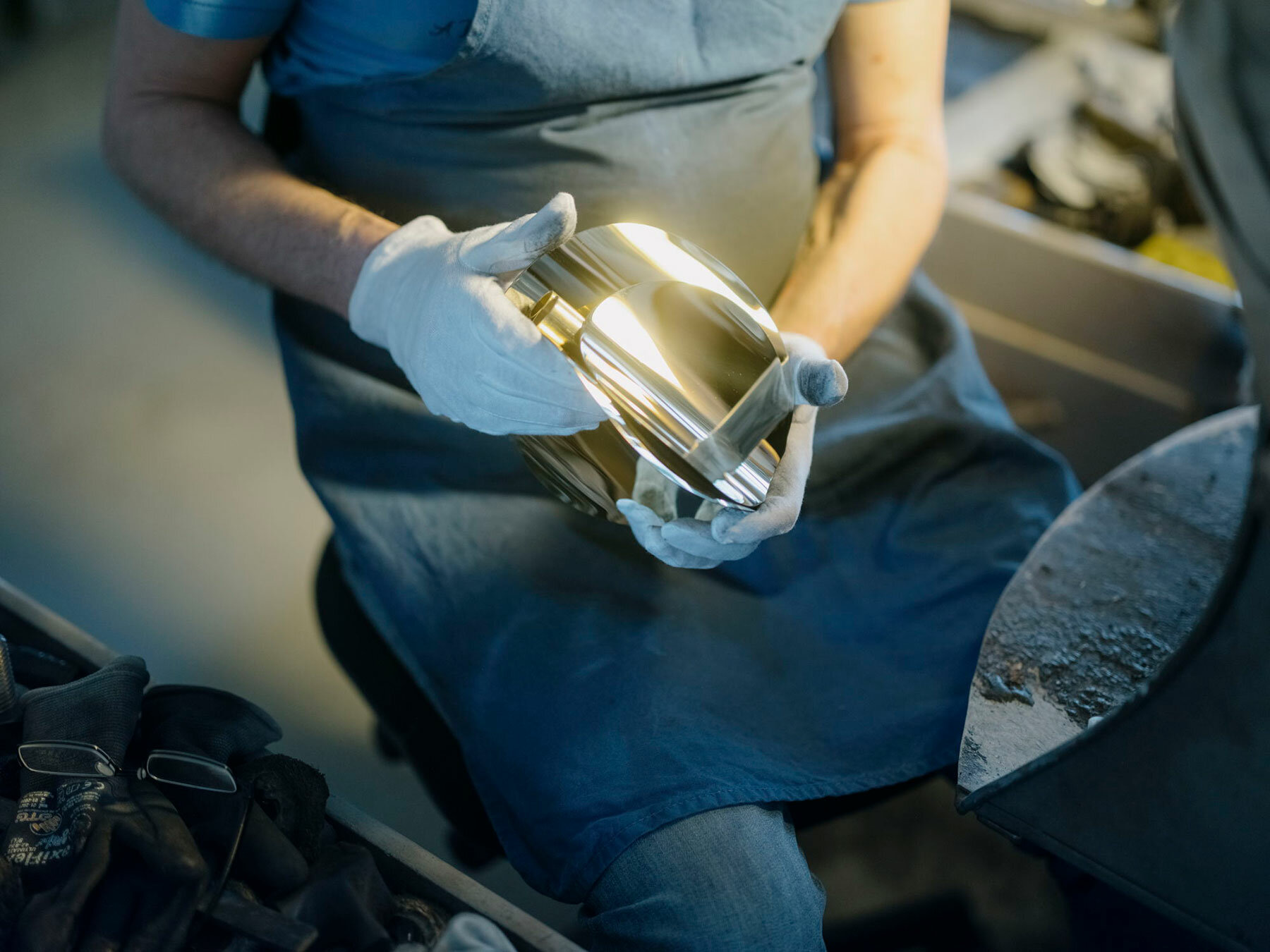 the mirror-like surface reflects its surroundings 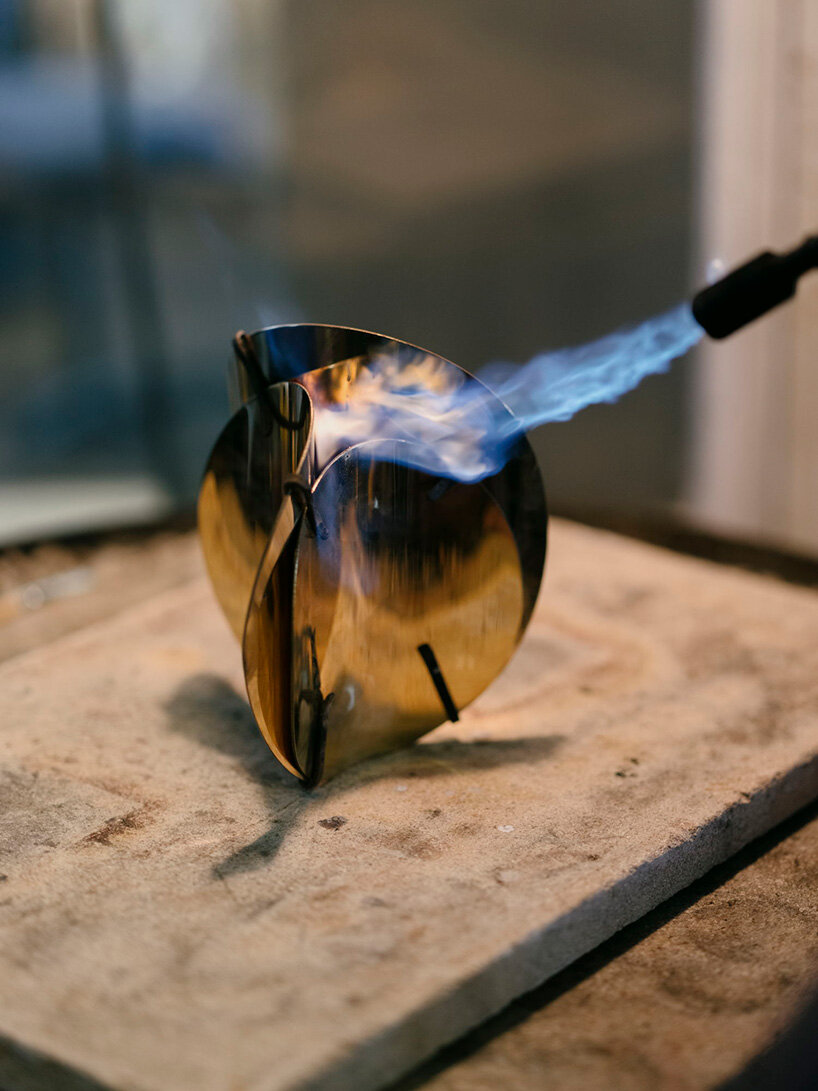 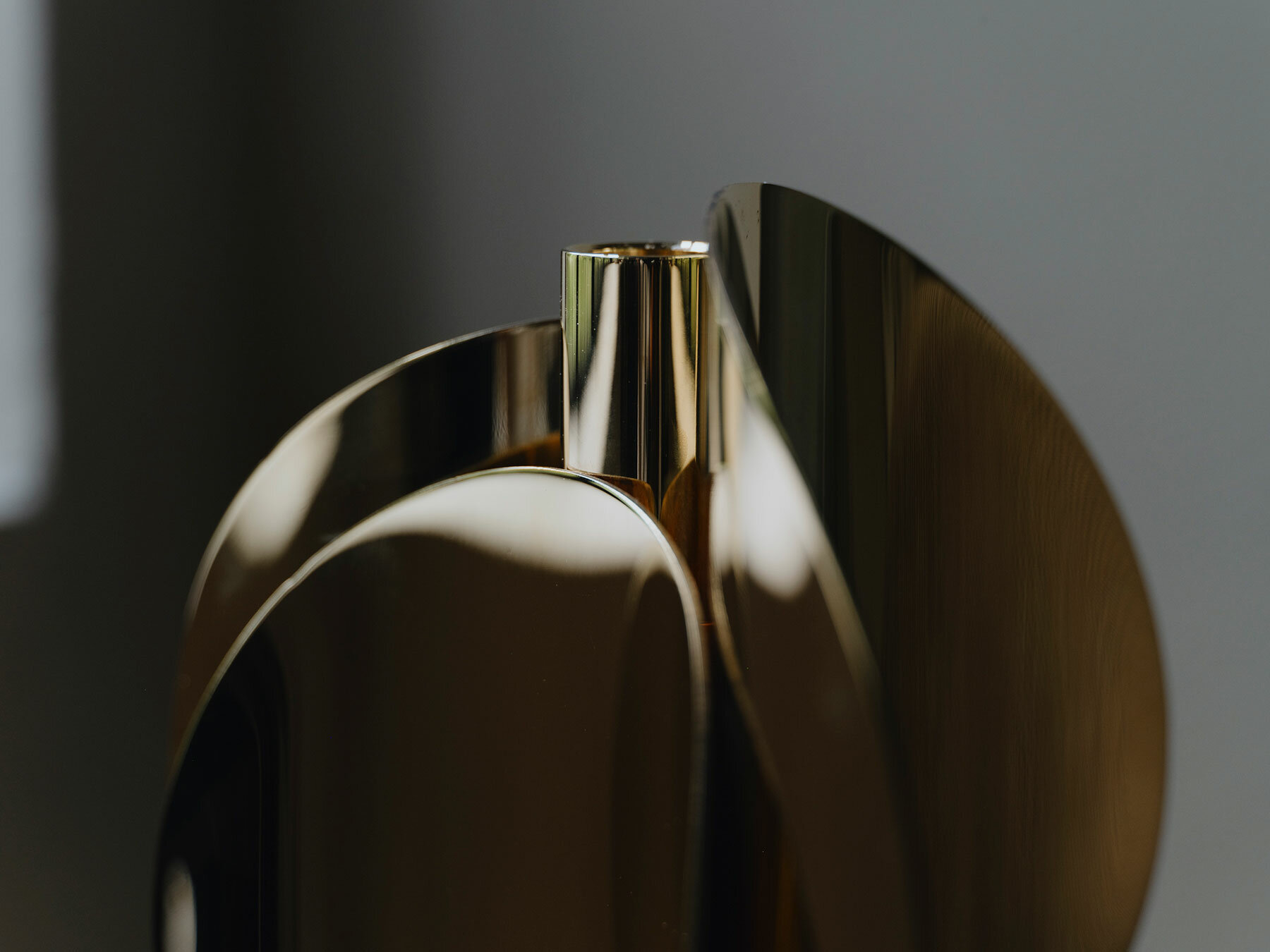 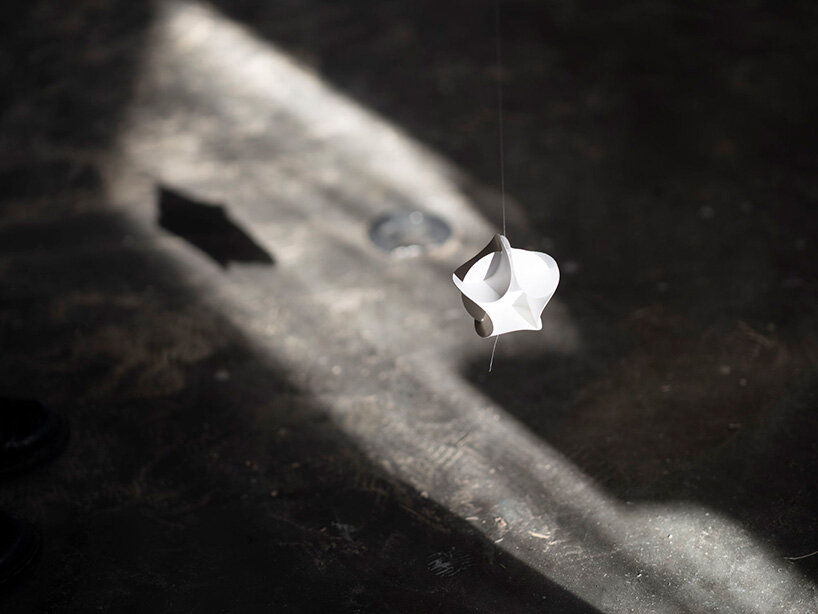 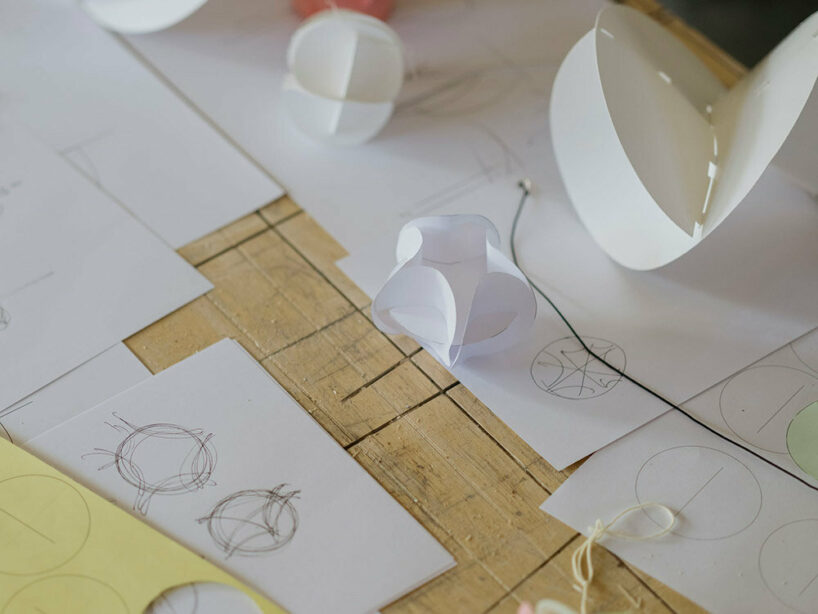 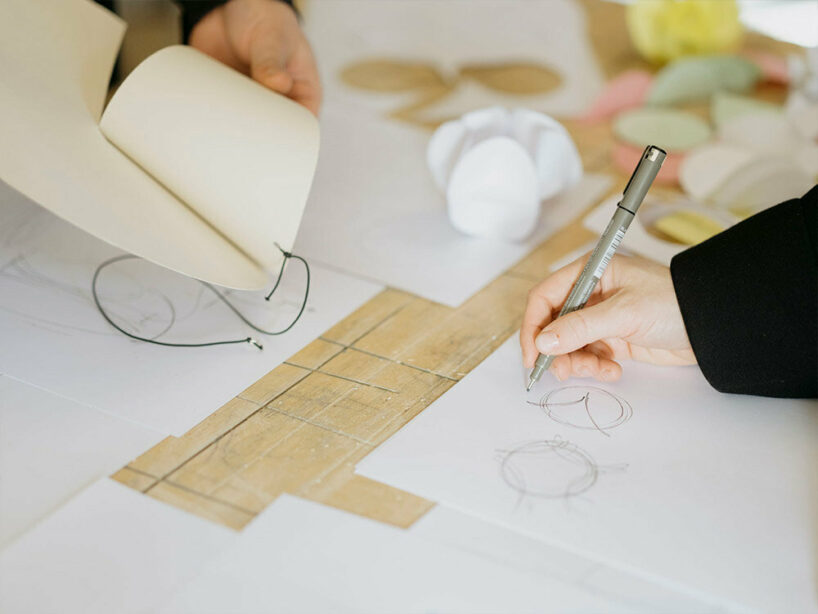 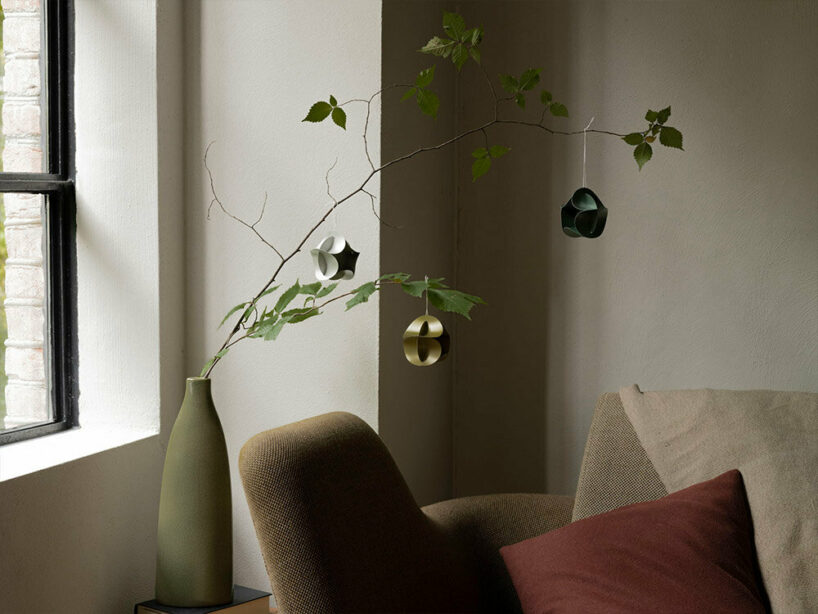