centered around city bikes featuring GPS-enabled electronic lockboxes, the ‘social bicycles’ (‘sobi’) concept utilizes the existing infrastructure of urban and tourist destinations, in conjunction with mobile networking, to create a dynamically managed bikeshare system. expecting the delivery of the first 60 prototype bicycles this october, founder ryan rzepecki plans to have a complete system ready for implementation in 2012. the ‘sobi’ team is currently seeking kickstarter funding, where interested readers can also learn more about the concept.

‘we have smart bikes, not smart racks,’ rzepecki explains: ‘our lock works with regular bike racks and does not rely on expensive kiosks and docking stations.‘

the innovative model has a cost-per-bike of less than one third of that of a standard station-based system. ‘sobi’ bikes are primarily based in central areas designated as system hubs, but users are permitted to lock and leave their bicycles anywhere within the system zone. incentive-based demand management puts the task of inventory control onto users: users who leave bikes anywhere outside a hub are charged a fee, and a user who returns that bike to a system hub earns the equivalent amount in credit. the GPS in the devices, as well as their identifiable frame, reduces the risk of theft.

each bicycle in the fleet is monitored via a lockbox that has been installed onto its seat tubes. the box is built with an on-board computer and GPS-enabled lock, and data is communicated to and from the ‘sobi’ server. the box doubles as a carry basket, and features retro-reflective paint and automatically engaged LED rear lights. the ‘sobi’ team has also designed its own custom bike frame, featuring an adjustable, non-removable seat and front carry basket. the lights and onboard electronics are kept charged via a photovoltaic panel installed on the back lockbox panel.

‘the direction we chose for our bicycle was something of a classic design, guided by a modern utilitarianism. the classic ‘step-through’ geometry is a time-tested way of making a bicycle easy to mount and dismount for people of any level of flexibility. the shaft drive, which may seem like a novelty or innovation, is actually a well-established technology […] perfectly suited for bike-sharing applications, where the small amount of added weight is negligible considering to the higher durability and cleanliness compared to a chain and chainguard.‘ 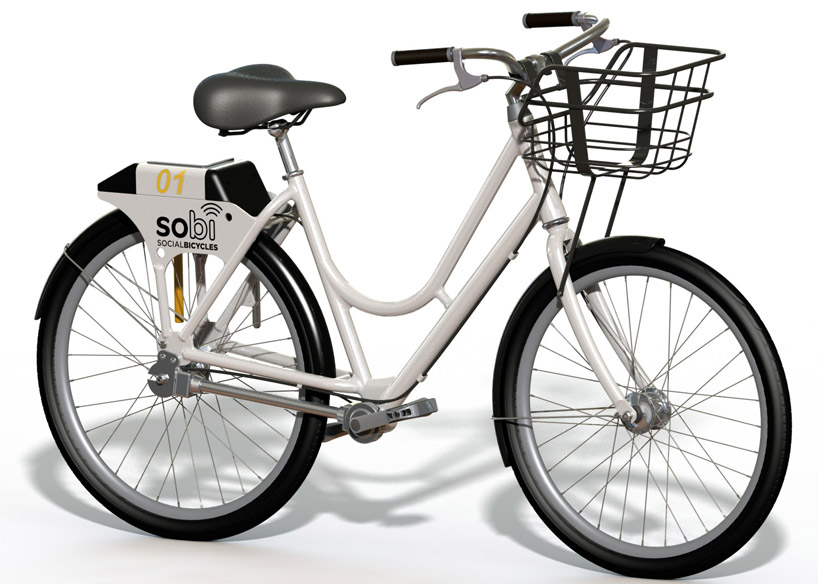 full view rendering of the bike 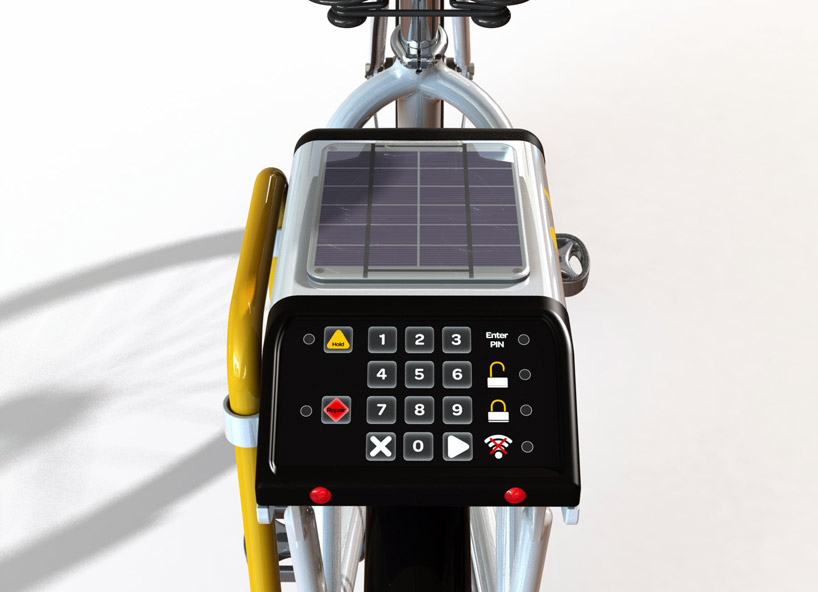 full view of the lockbox and keypad

users register for the ‘sobi’ system online via computer or smartphone application, or at dedicated street kiosks or subway ticket vending machines. once his account has been created, a user can access a bicycle by entering his PIN number into the keypad on the bike’s lockbox, or by sending a request via text message, phone call, or through the smartphone app. the application also offers an interface for searching for nearby bikes, marking those that are available as well as those that need to be returned to a hub, earning him credit.

the user is charged based on the amount of time he uses the bike. locking automatically ends the transaction and labels the bike as available to other users; although users may also ‘hold’ their bike for up to ten minutes, during which it should be locked down but is not registered on the system as being available. although the bicycles are designed to be durable, resistant to reckless behaviour or vandalism, users can also mark a malfunctioning bike as in need of repair, and ‘sobi’ operators will locate the bike and address the problem. 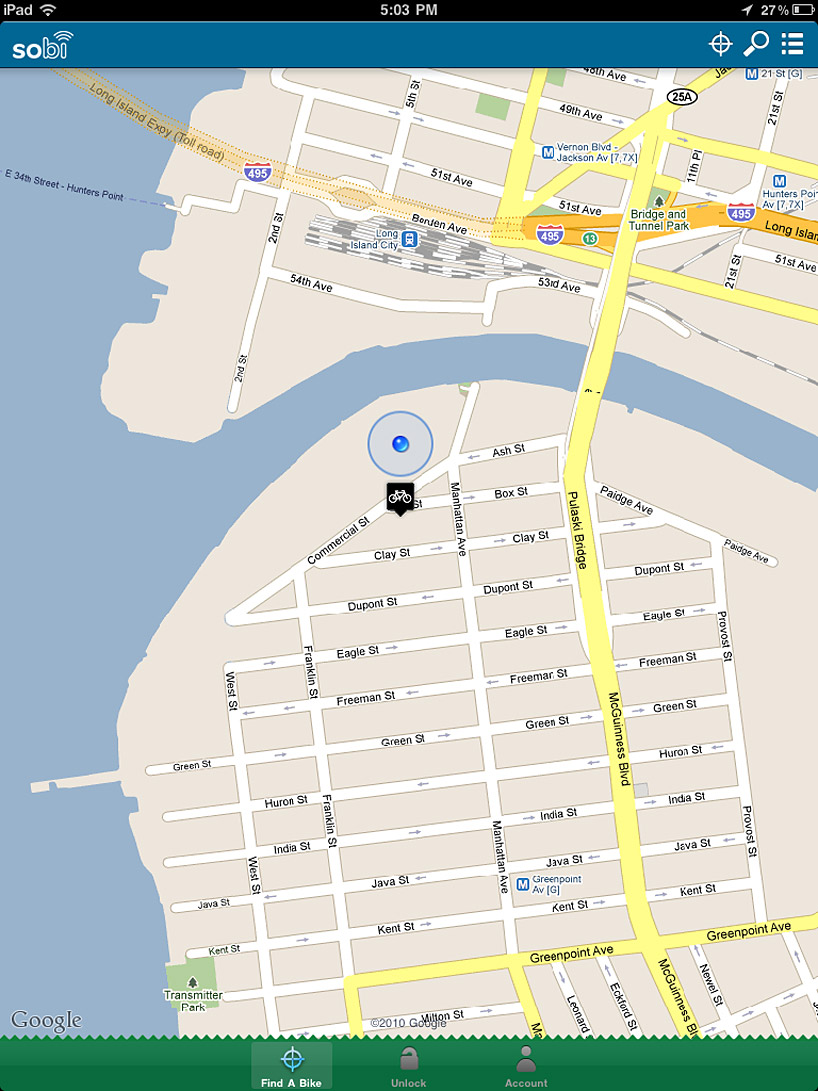 the ‘sobi’ system is designed for easy integration into urban or resort environments, making use of existing bike racks. the current bicycle design sees the lockbox built directly into the bike frame, a more cost-efficient and secure option to an earlier design model, which considered the possibility of mounting the lockbox onto the seat tube of existing bikes.

the system, with its GPS data, facilitates self-management: information from bike density ‘heat maps’ and frequent user travel paths enables ‘sobi’ staff to redistribute bicycles or reposition entire system hubs to best serve user needs. the lack of required infrastructure other than the bikes themselves means that system hubs and services can even be altered to reflect seasonal or other changes in user habits.

users can connect through a ‘sobi’ social network, view maps and data about their travel habits, and see approximately how many calories they have burned and how much carbon emission they have prevented using the bikes. they can also search for bikes, setting the boundaries of the system and hub zones in which they would like to find one. 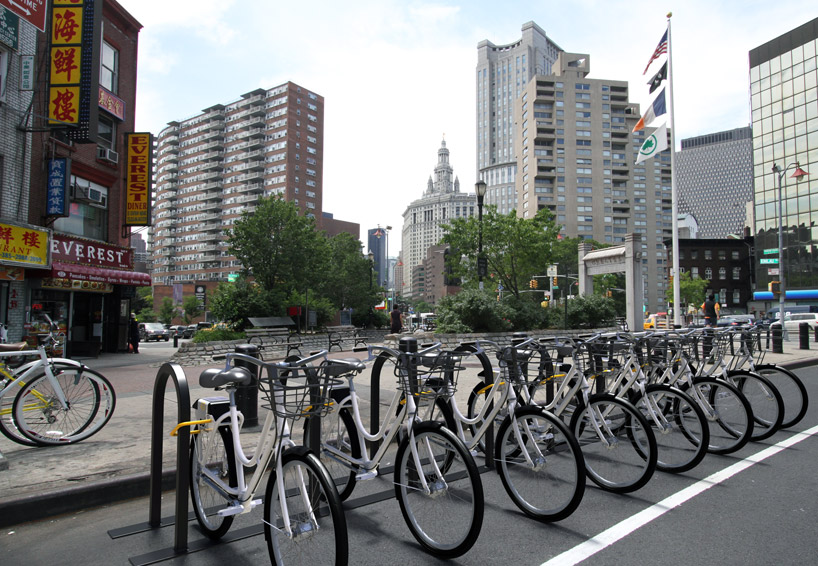 rendering of a system hub, which makes use of existing bike racks 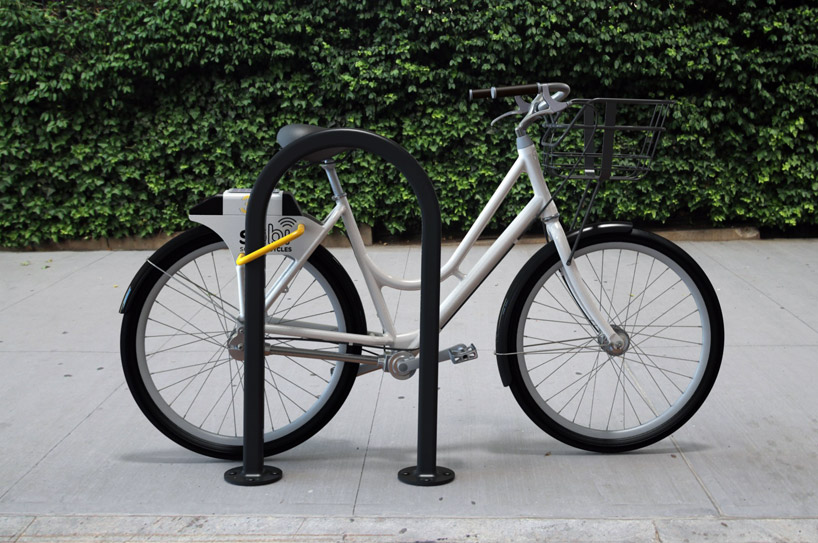 view of the bicycle locked 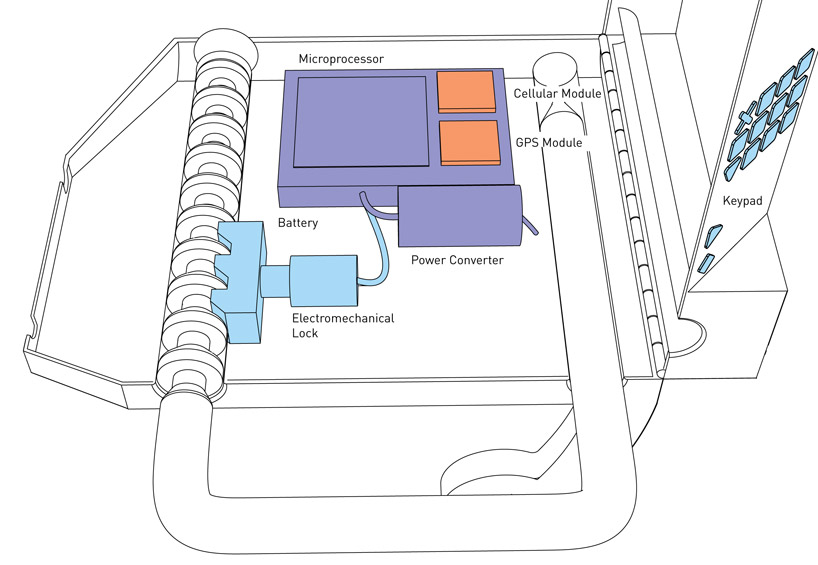 structural diagram of interior of lockbox 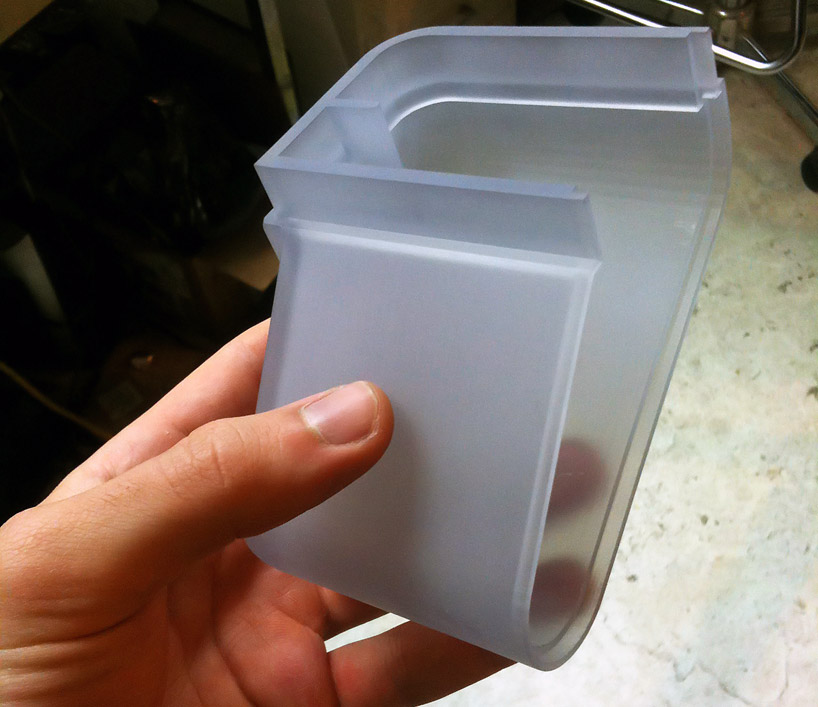 most recent prototype of the lockbox casing 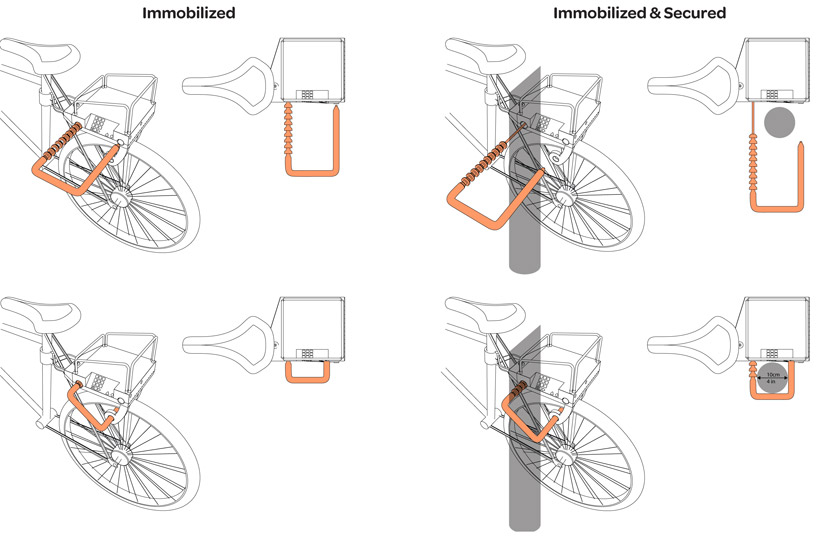 diagram of the locking mechanism for an early lockbox design (top row: locked; bottom row: unlocked); the current U-lock model functions similarly but is more secure, can be used from both sides of the bicycle and lock to larger objects