multidisciplinary creative studio atmos based in london was commissioned to design and deliver the exuberant centerpiece staircase that weaves between the 3 levels of experience at HIDE bar on piccadilly road, london. the stair’s design creates a plant-like structure that grows like an irrepressible life-force from beneath, bursting from the shadows of the basement towards the daylight above. ‘stairstalk’ unfurls at the 1st-floor level, as if reuniting with its vast family of arboreal brethren in green park opposite — nestling just beyond the full-height panoramic glazing fronting piccadilly. 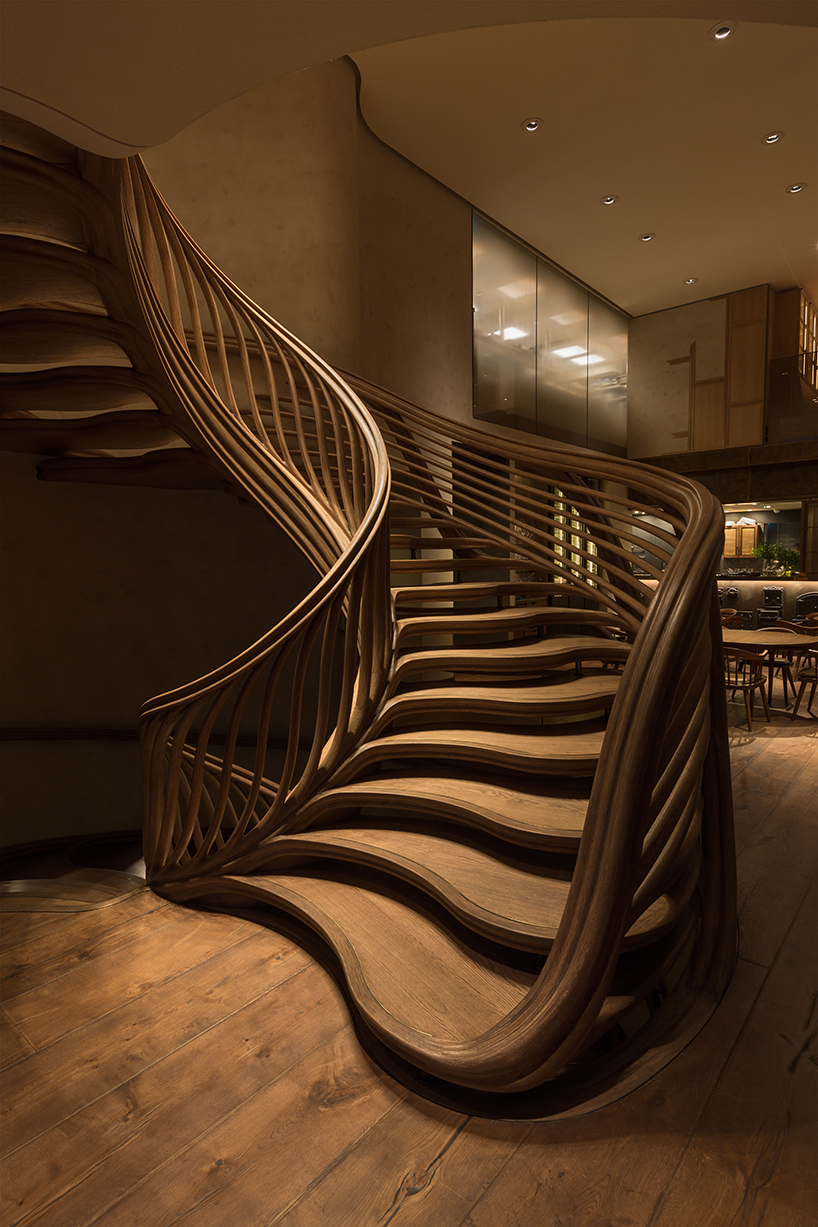 
stairstalk’s entire surface is made of european oak; the main structure was layered from glued slices of thin oak veneer, laid and laminated together against curved moulds and then hand-sanded into shape to form an elaborately-curving timber structure whose visible grain magically follows its path. atmos’ evolving design took its cue from the natural palette, playful imagination, and powerful aesthetic developed by both the interior designer and the project client. 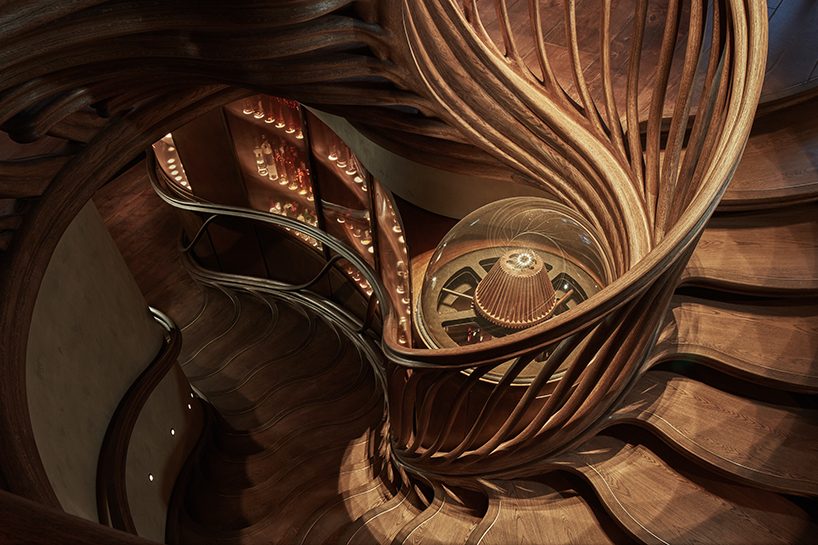 the stair glides along a glazed bar wall to its left until this cedes at the spiral’s center to a circular glass-domed beer-hop rummager, specially commissioned as a hand-turned cast-iron set of cogs that reference the distilling process — and enable the barman to rotate and access the bottles within. on its other side, the wall flanking the hidden lift undulated and protruded to inflect the stair geometry, just as both ceiling edges meeting the stair also undulated to respectfully meet it. 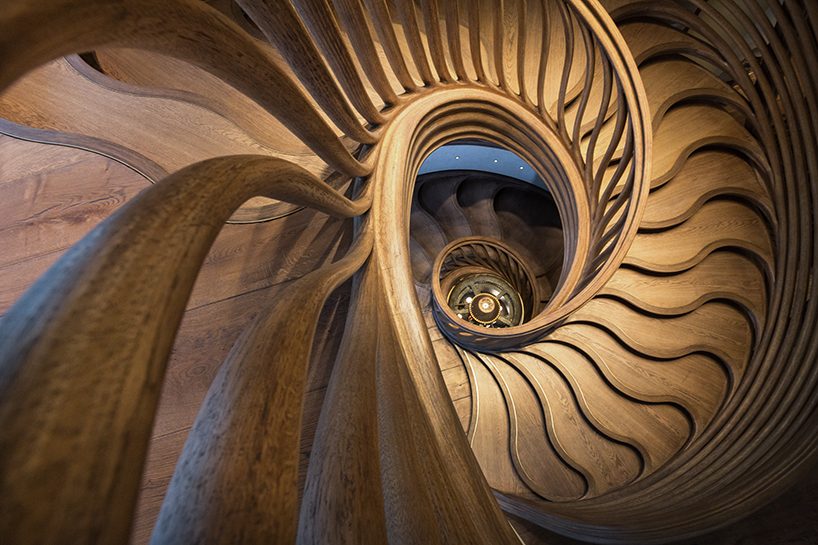 the inner balustrade split where it hits the ground level to form a fibrous offshoot that encircles the stair void, bifurcating to continue upwards as the main stair stem, but also unwrapping to form the front nosing of the tread just one step up, which in turn further bifurcates to not only wrap around the edge of this 1st floating tread (eventually blending back into the stringer from which it sprung, its fibres morphing perfectly with the ridges of its underside), but also then rising as a robust thick strand which eventually forms the outer handrail, gliding upwards before wrapping around the wall towards the lift. the tread geometries were assembled from pure arcs, conjoined tangentially and seamlessly at their tips, for simplicity of transcribing drawings into fabricated elements. 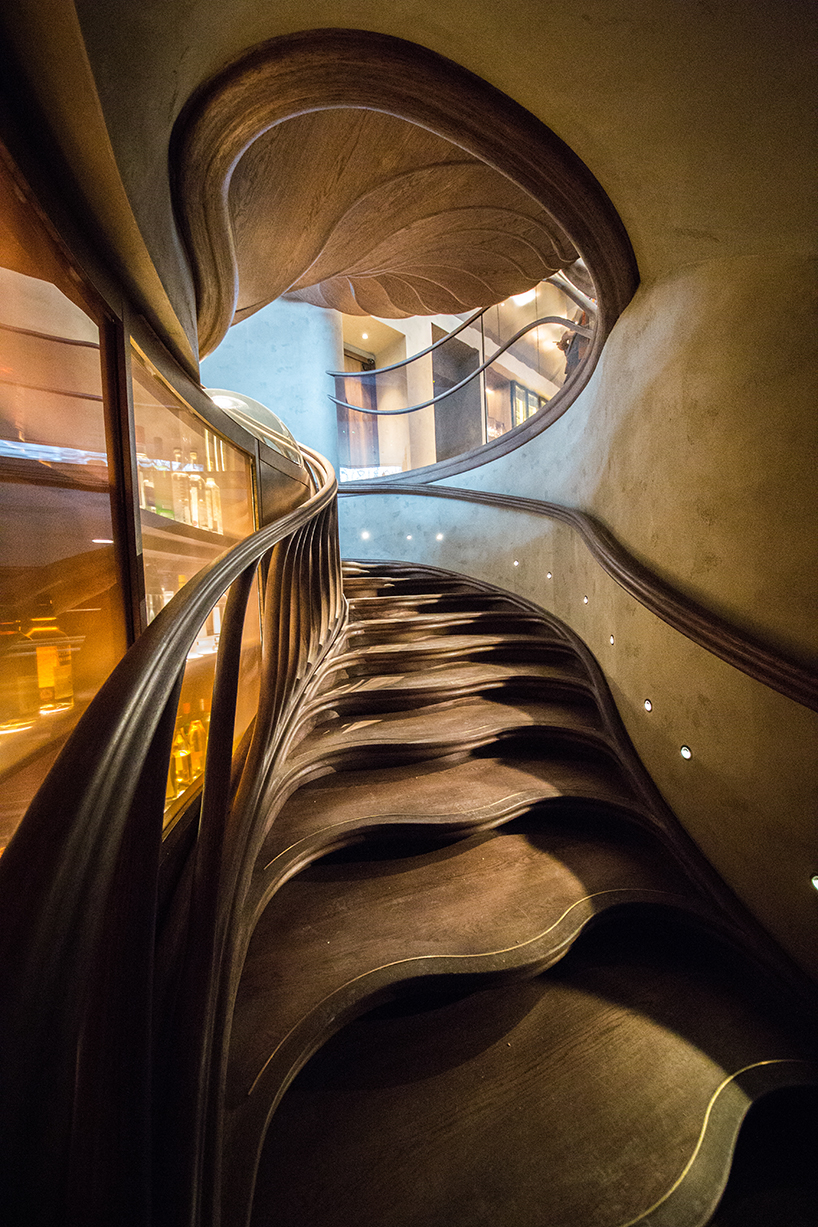 
the oak was slightly darkened using natural stains and oils to help reveal its grain, brushed on thicker and more richly at areas of desired contrast, which also helps facilitate optical navigation of the staircase’s heady forms. the concealed metal core, structurally required to enable the stair to float upwards free from constraint at the walls, is implicitly allowed to shimmer through briefly at the front nosings. all floating cantilevering treads above ground level were reinforced with 10-15 mm layers of stainless steel plate, which were further sheathed in structural plywood and interconnected with short, thin steel stubs – reinvigorating the structural principle under which cantilevered stone treads were traditionally supported. 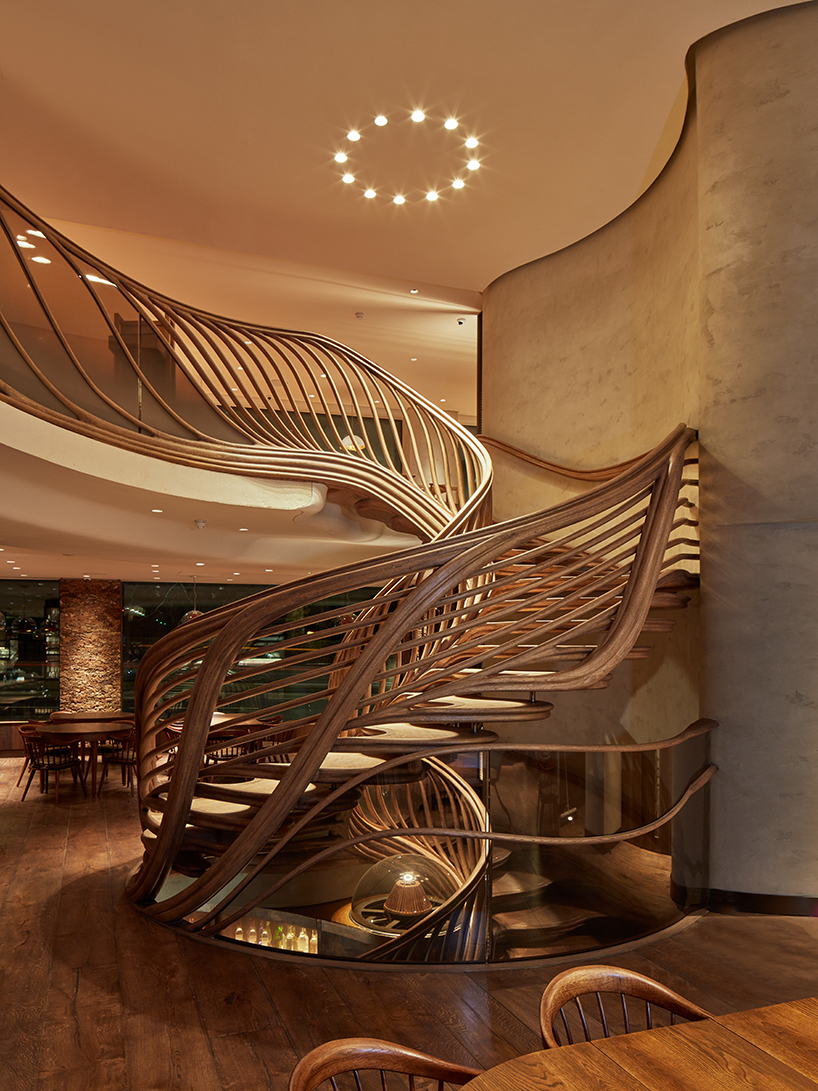 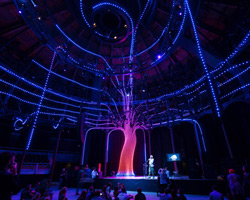 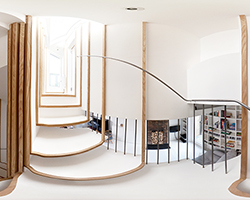 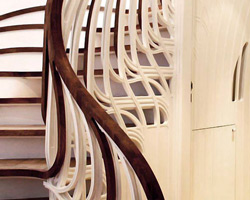 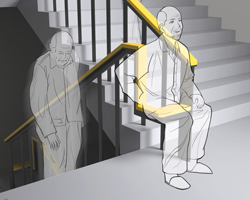 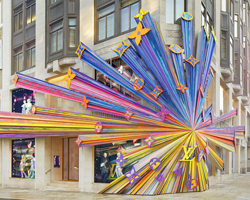