the annual belgrade design week(BDW) has just kicked off its conference series, and designboom is on hand to bring you live coverage of the various presentations, delivered by international creatives under the categories of architecture, design and communication. the first day of speakers saw ralph nauta, co-founder of studio DRIFT engage the audience with his agency’s extensive portfolio of architectural interactive lighting installations which have been exhibited across the globe. 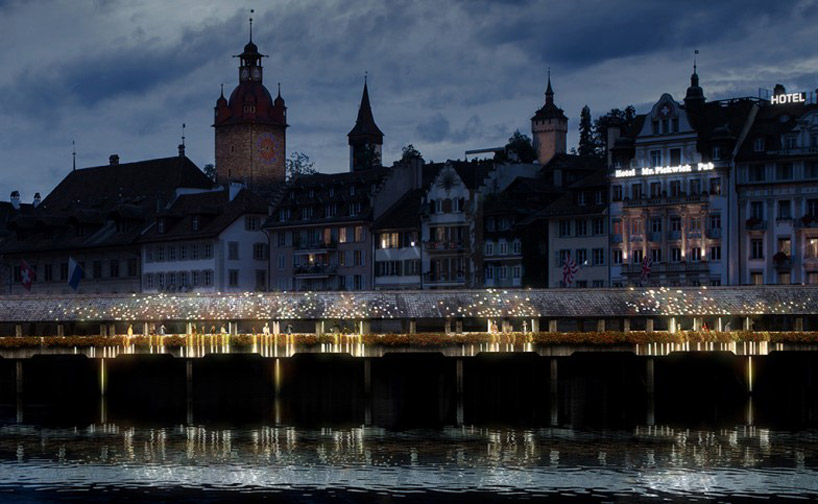 visualization of ‘the particle plan’ team’s scheme for kapellbrücke in lucerne, switzerland

on the occasion of BDW 2014, nauta revealed the dutch agency’s winning proposal — a permanent interactive lighting installation — for one of switzerland’s most important landmarks, the kapellbrücke (chapel bridge) in lucerne. conceived together with three other dutch studios — DUS, digiluce and rombout frieling — the particle plan’ is cited to be one of the largest of its kind upon completion. 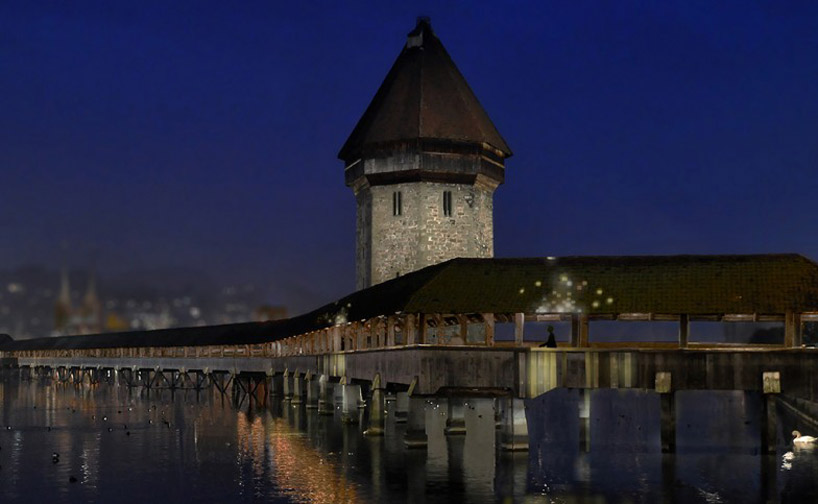 standing as the oldest surviving truss bridge in the world, the team has drafted a scheme that will transform kapellbrücke into a public stage. considering the individual handcrafted pieces which make-up the entirety of the covered wooden footbridge to be similar to cells of a body, ‘the particle plan’ will constantly change while the structure still remains as a whole. each stroll over the kapellbrücke will initiate a unique light pattern across its exterior, triggering selected individual ‘particles’ of the bridge to become illuminated with hues that draw on the natural beauty of the wood and mosses that make-up its framework, enhancing these with a natural white light. 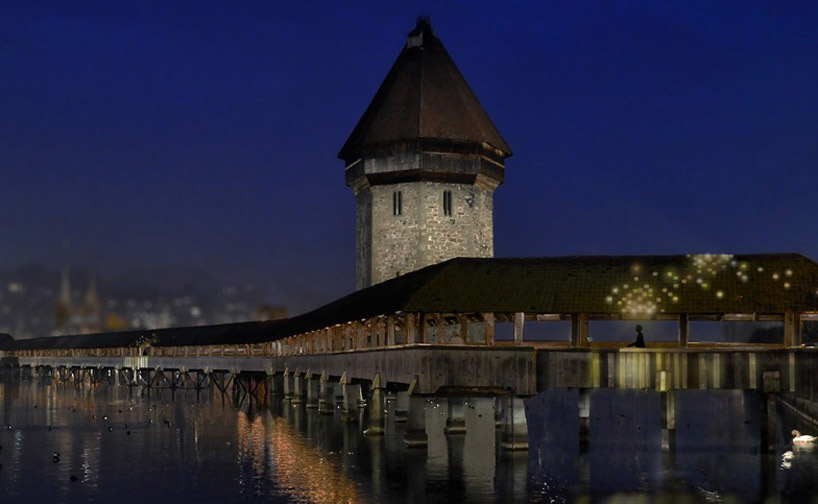 the lighting will constantly change while the structure remains whole

‘the particle plan’ invites pedestrians to transform kapellbrücke in real time, with their own activity through the bridge lighting their path, while also projecting a brilliant roofscape that is visible to those who are viewing it from the riverbanks. the technology employed has been specially rendered to this monumental work, and will be the first permanent installation utilizing such a large number of projects and novel sensing methods to achieve the poetic atmosphere. 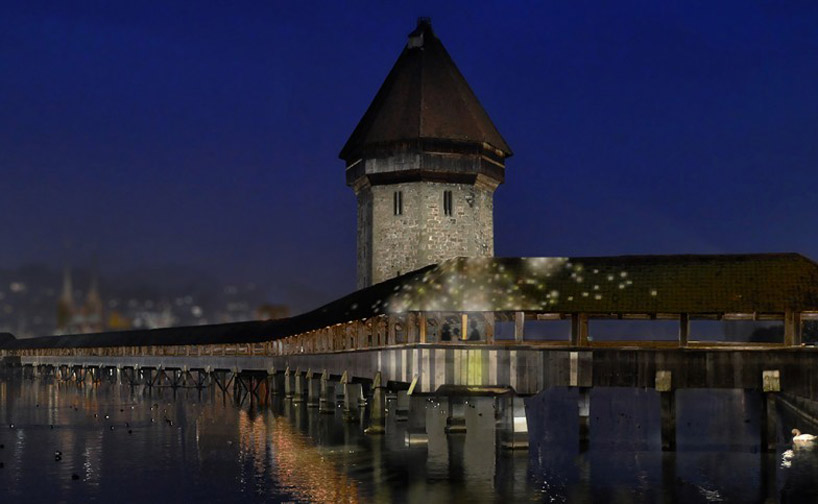 the activity of pedestrians over the bridge will trigger the lighting 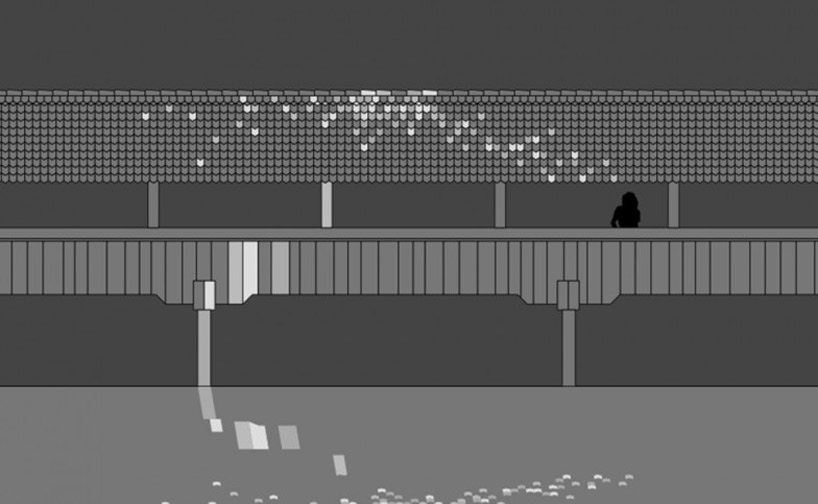 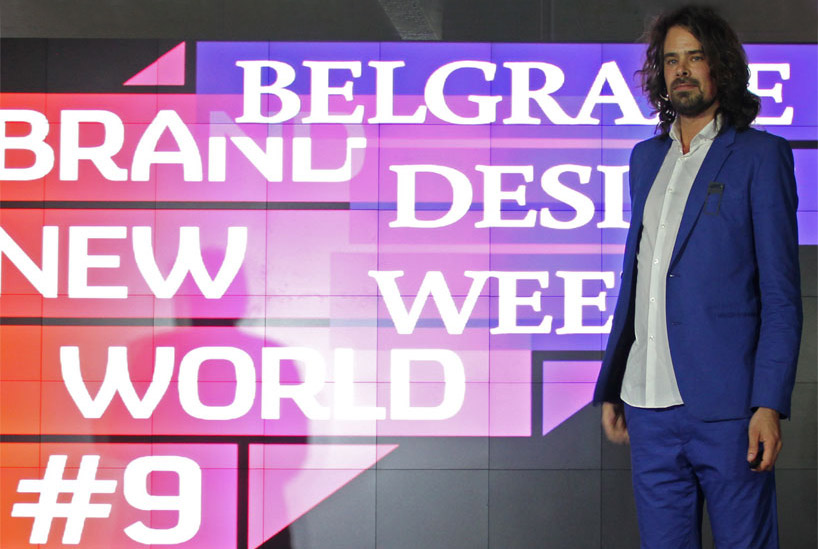 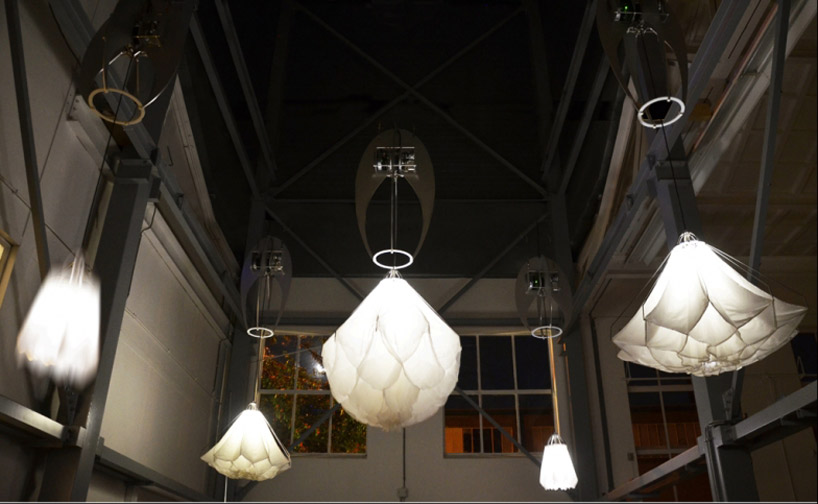 nauta also spoke about a number of projects studio DRIFT has completed, including ‘shylight’, another lighting installation which draws its influences from floral species that close at night for self defense, as well as to conserve their resources. the active sculpture unfolds and retreats into itself in a choreography that is very similar to the blooms which they are meant to reference. the gracefulness they exude is a result of their multi-layered silk constructions, with their luminosity controlled by iPhone or iPad. 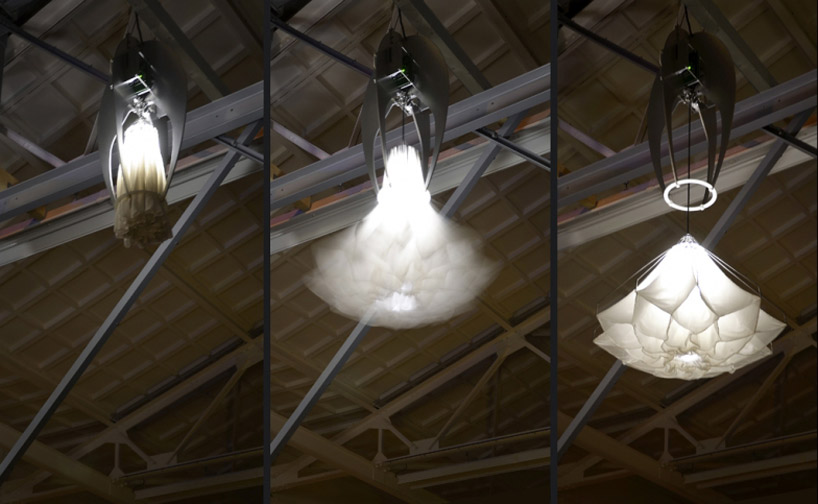 each ‘shylight’ has a dramatic fall distance of 9 meters which makes it possible to conduct large compositions for high ceilinged spaces. they are released on a system of springs, and open up into a cocoon-like form once fully dropped. while gravity pulls each ‘shylight’ downwards, a motor controls its upward movement.

the graceful choreography of ‘shylight’
video courtesy of studio DRIFT 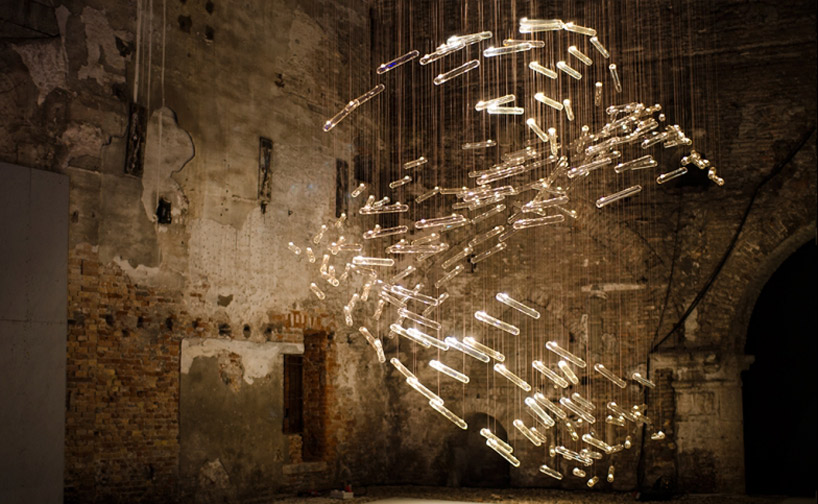 ‘flylight’ is a site-specific lighting installation that interacts directly with its surroundings. an arrangement of delicate glass tubes light up in an unpredictable way, mimicking the behaviour of a flock of birds in flight. the work questions the delicate balance between the group and the individual. just like birds, humans find safety in groups, while at the same time they are forced to act according to a set of rules in which society functions. 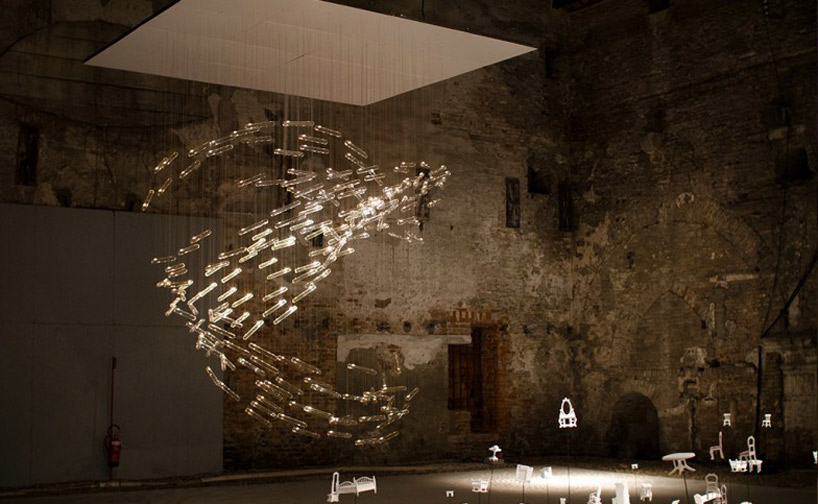 2014 marks the ninth edition of belgrade design week, an annual, internationally-renowned festival for creative industries and modern business in serbia and throughout the south east european area. since 2005, founder jovan jelovac has successfully forged multicultural connections between artists, designers and entrepreneurs from the region with the greater global design scene. the initiative serves as a platform for creatives to engage in the exchange of ideas across a range of disciplines — advertising, architecture, arts management, communications, design, fashion, marketing, new media and publishing — delivering approximately 30 international speakers who share their perspectives and personal developments in their respective fields.

this year’s conference program ‘brand new world’ sets opens up discussion regarding the creation of new values in today’s fast changing world. on the occasion of this edition, president of the republic of serbia, tomislav nikolic opened the initiative, stressing the importance of the creative industries for the continued development of the country’s economy. local designers stand side by side with some the world’s greatest talents in a rare opportunity to bring the world to belgrade and to present belgrade to the world. find out more about the program, selection of keynote speakers and exhibition sites on designboom, here. 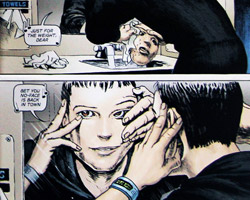 Dec 29, 2014
igor kordey: the design of comics + the art of storytelling at belgrade design week 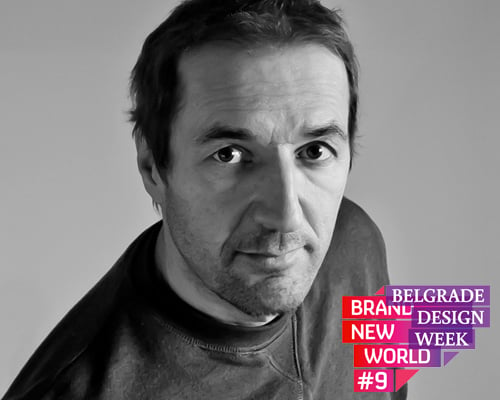 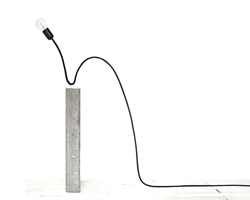 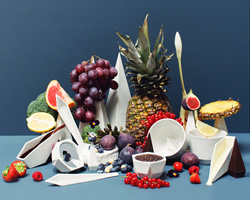 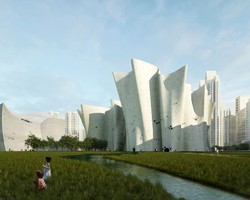