UPDATE: google has announced android 8.1 will feature the burger emoji with the cheese placed on top of the patty.
our long nightmare is over!

for most, returning to work may be the worst way to start a week, but not for google‘s CEO sundar pichai, whose recent tweet – and insight to his top list of priorities for the monday morning slug – has caused quite the eruption on social media. the search engine’s top dog has promised to resolve the problem bothering internet users across the globe – pause – the placement of the cheese in the cheeseburger emoji…
OLD: bun, lettuce, tomato, burger, cheese, bun. that’s complete madness of course. NEW: the correct order has the cheese ABOVE the burger!

BTW: there’s also a cheese-related update which deepens the holes of said cheese.

the debate started on saturday october 28, after thomas baekdal, the founder of barkdal media, posted about the difference between the placement of cheese in the emojis of both google and apple. ‘i think we need to have a discussion about how google’s burger emoji is placing the cheese underneath the burger, while apple puts it on top‘, he tweeted. 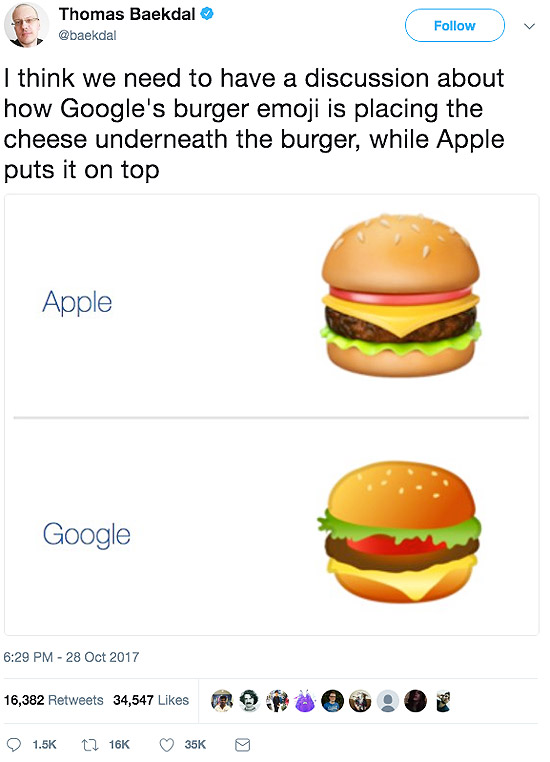 in his response to the viral online debate, pichai addressed that he will be giving the issue priority above everything else today. soon many joined the debate of over 1,500 opinions including many offering their analysis of what each emoji meant in relation to the personality and ethos’ of each each company – is this seriously the next gen in fortune telling? 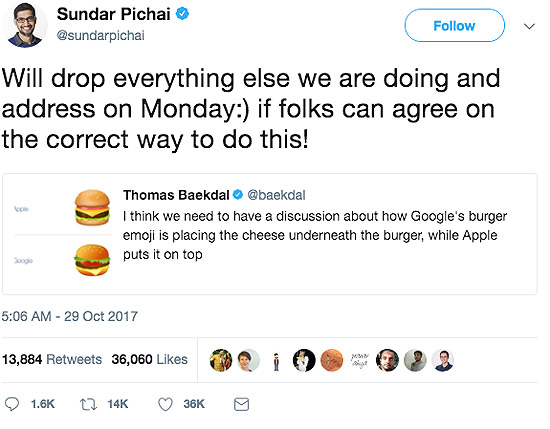 sundar pichai responded via his twitter, promising to resolve the issue today

the rest of us will most likely spend our monday mornings in the office distracted, if only to figure out where we stand as individuals when it comes to the layering of high-calorie containing guilty pleasures. prepare to recall all fast-food experiences and burger making habits in order to analyse the logistics of this pressing matter.