playground city
at: experimentadesign amsterdam 2008
from: september 18 – november 2, 2008
with the exploration of the urban landscape and how we utilize our public spaces, experimentadesign amsterdam
2008 will be exhibiting ‘playground city’ which investigates the role of play within our cities. its the imagination and
fearlessness of children which always allows them to find ways to play and entertain themselves in even the most
mundane spaces. however, with the growing congestion of cars, buildings and ongoing construction, the city
is not always the most inviting or safest environment for them. hence, the importance of playgrounds, a space
designed to protect and facilitate play amongst children. in holland there has been a huge tradition in the area of
playground design. the dutch architect aldo van eyck alone designed 700 playgrounds during his career.
‘playground city’ is a survey of urban play environments, from playgrounds to sports field and schools,
with proposals of how to transform each of these spaces into places of excitement and creativity. 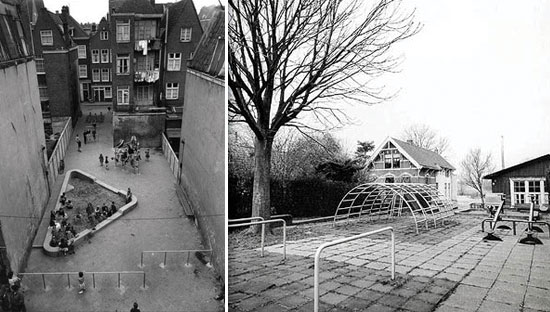