superstructure by morag myerscough and luke morgan is a temporary structure created for the kulturfestival in stockholm. at 10m high the superstructure forms a striking gateway to stockholms kulturfestival situated on norrbro bridge over norrström with the historical backdrop of the riksdag building and the royal palace.

this year the kulturfestival’s theme is ‘united kingdom’, the events department of the city’s arts and culture section of the city of stockholm together with the british council have put together a diverse collaboration of events for the festival.

for the 10th anniversary of the festival morag myerscough & luke morgan were asked by the british council and claes karlsson, creative director of the festival, to design a structure that was eyecatching and fun and at the same time functional. 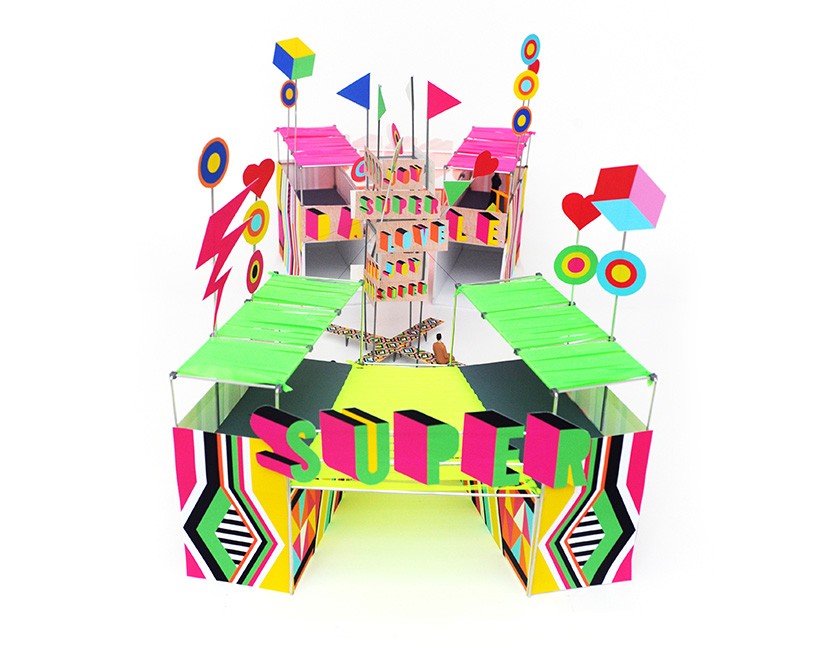 morag myerscough & luke morgan told us more about the project:

‘our work often incorporates public engagement and as this was such a prominent piece in the middle of the city we wanted to involve people wherever possible. we suggested this to all concerned and they liked the idea of involving young people in the project. in the centre of the structure is a large totem with seating at the base and we proposed this to be a poetry piece working with young people in the suburbs of stockholm with the british poet yemisi blake.’

‘yemisi blake went to stockholm and worked with the young people at 2:A hemmet — ungdomens hus in skärholmen to create a series of 5 word poems using swedish and english. twenty poems were created and we chose four for the totem.’

‘as the bridge was being closed off this only allowed for a four day install and two day takedown. due to the limited time it made sense to design the structure around four shipping containers which provided dry secure spaces for the various workshops to inhabit and scaffolding that was quick to put up and take down. as we were in such a prominent position on a bridge we wanted to give people views that at any other time were not possible. we constructed platforms for viewing and relaxing.’

‘even though there were time constraints we wanted to hand paint as many elements as possible. the city of stockholm offices are in old warehouses and this allowed us to set up a painting workshop for the summer. the city of stockholm arranged for two recent graduates, olle ardman & björn krogvig, from the konstfack to run the workshops for us when we were not there with a team of paid young summer workers. morag went and set the workshop up and showed all the techniques and provided all the stencils for painting and then the team in the workshop got in production over a three week period. young people who had never painted before really enjoyed the whole experience.’ 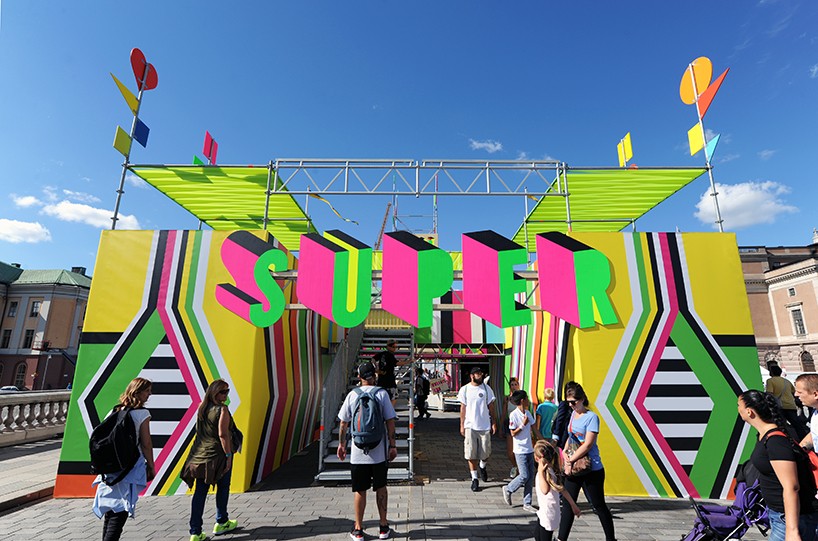 one of the entrances to the strcuture 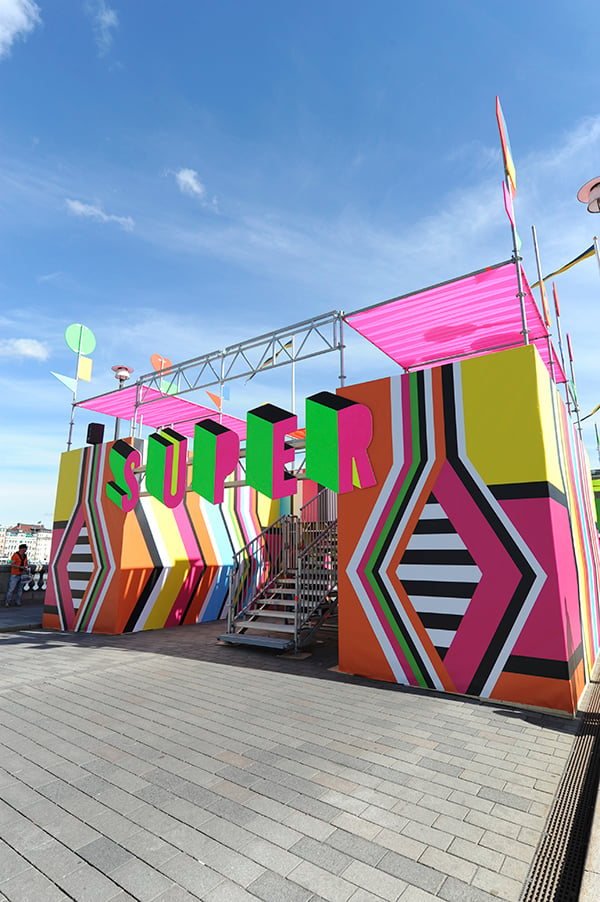 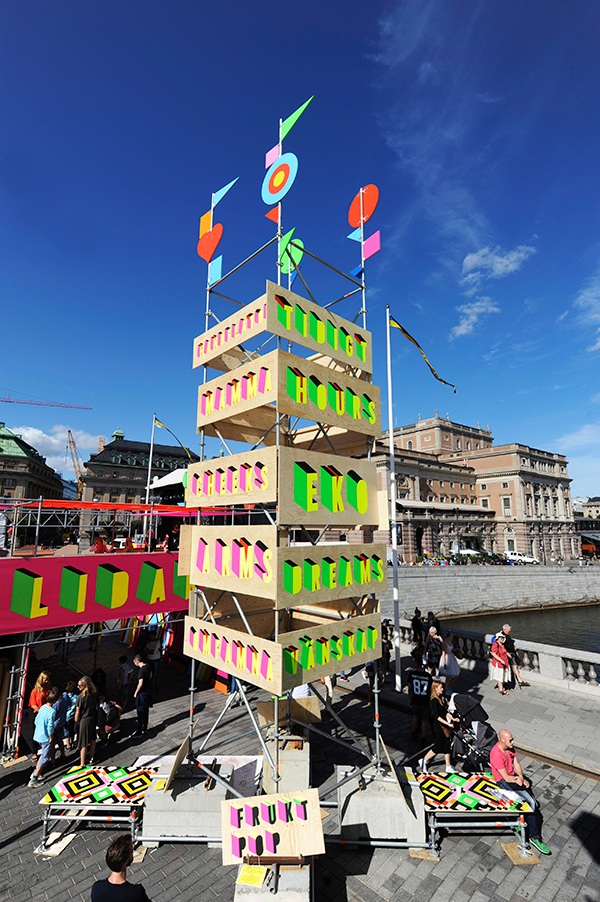 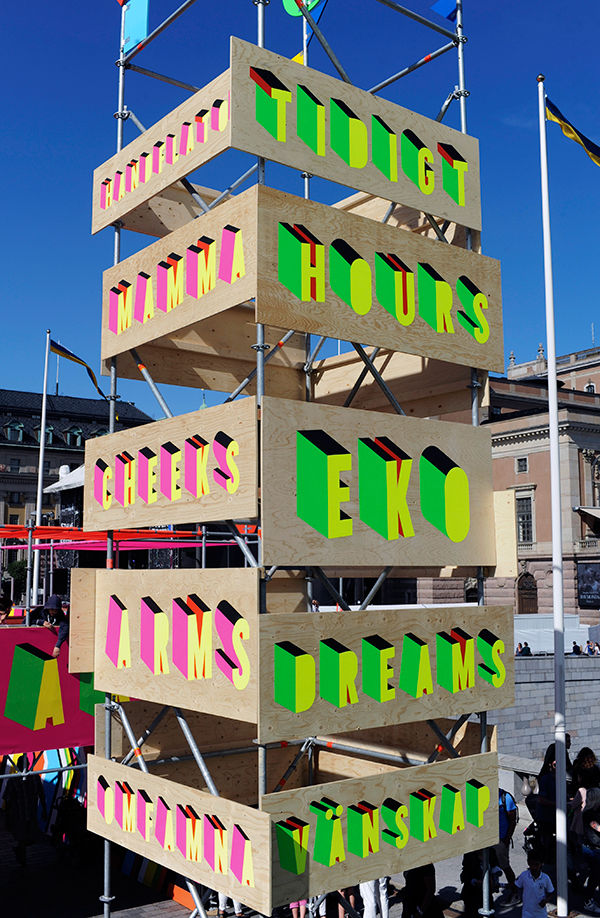 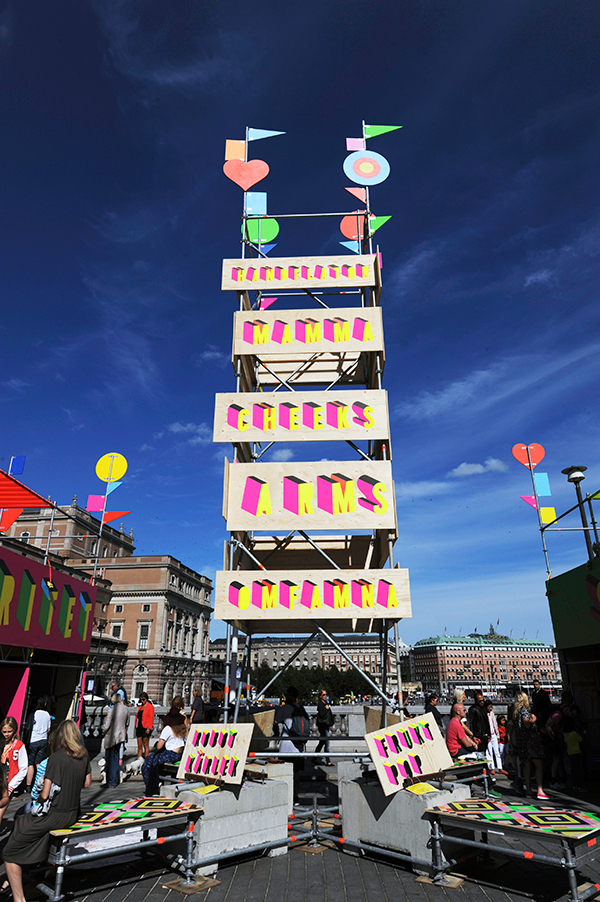 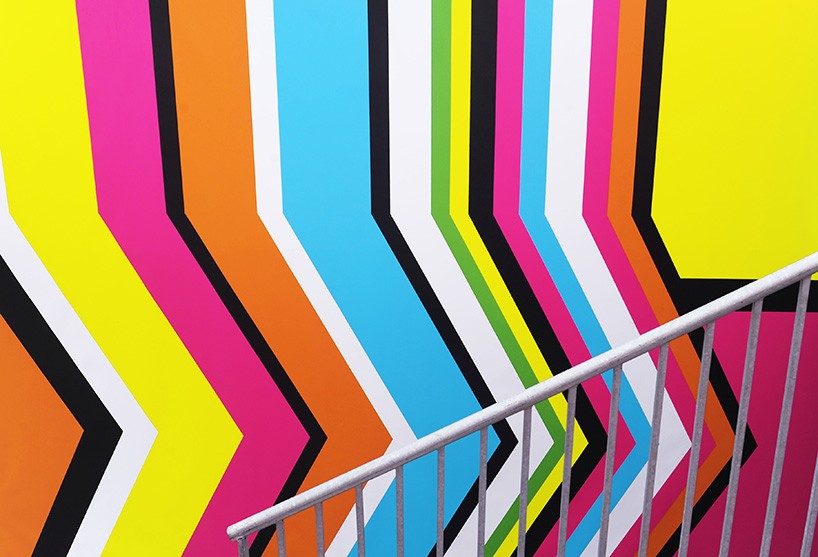 details of the vivid patterns painted 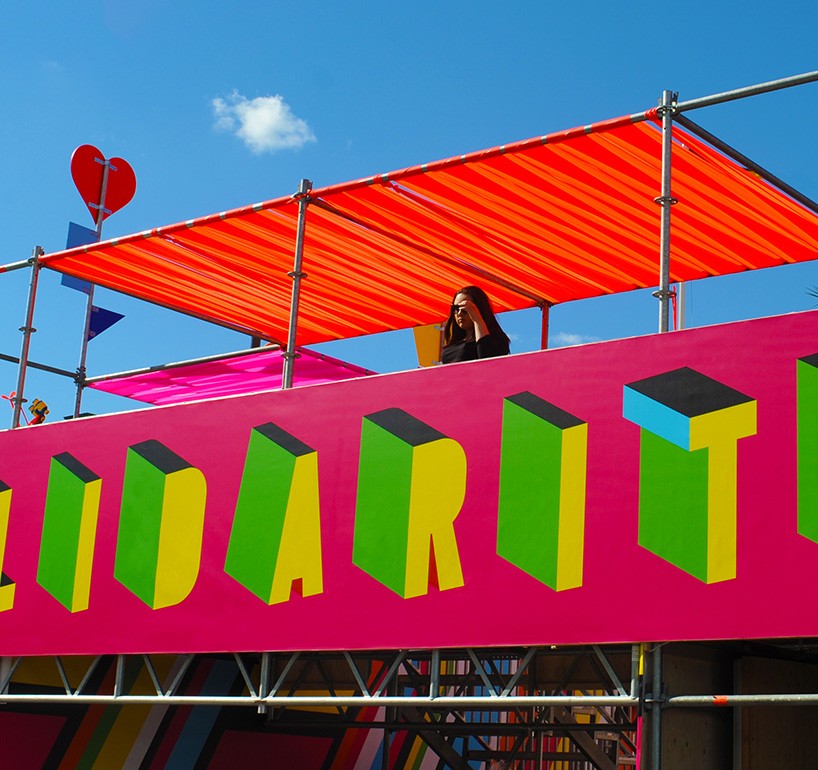 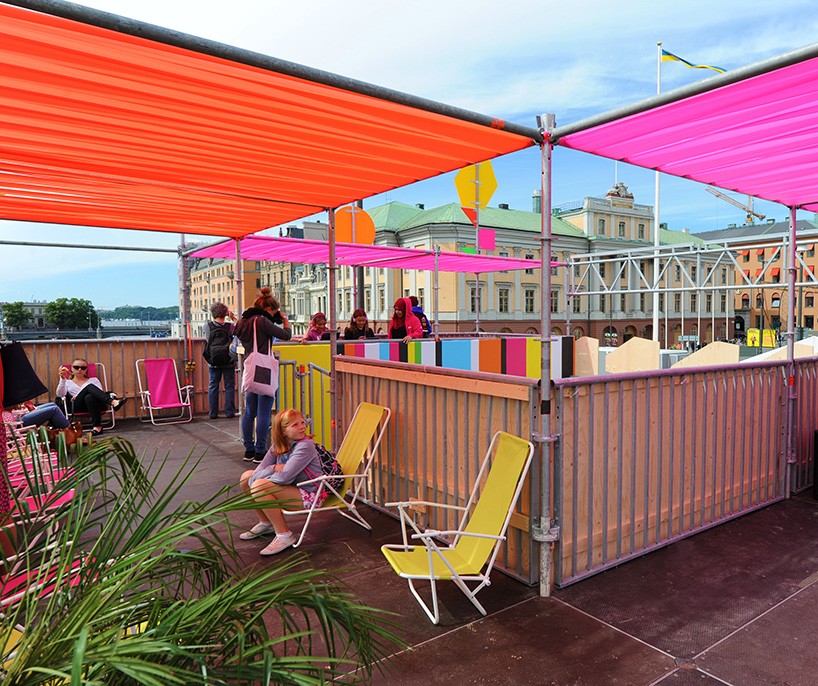 visitors relax up on the second level 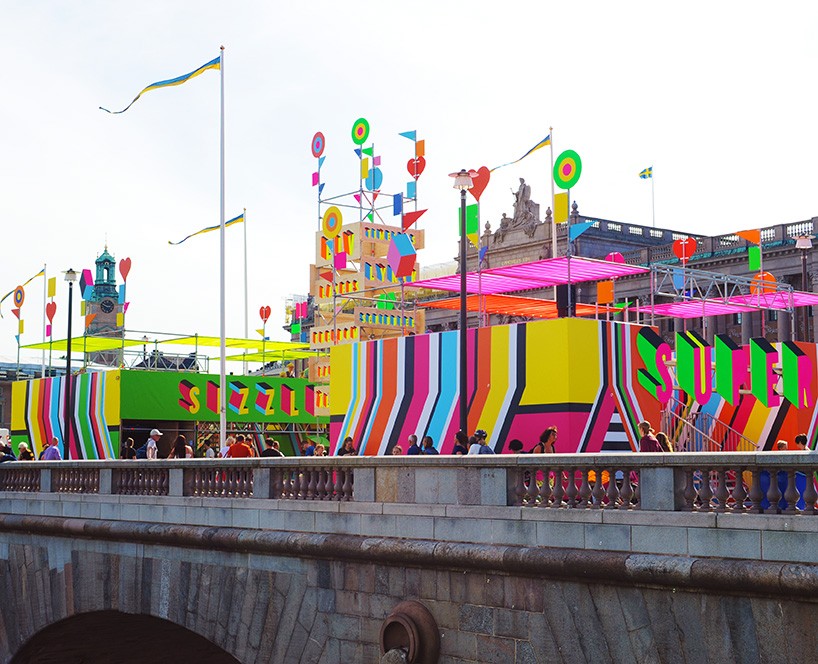 the structure is installed on the norrbro bridge in stockholm until august 16, 2015 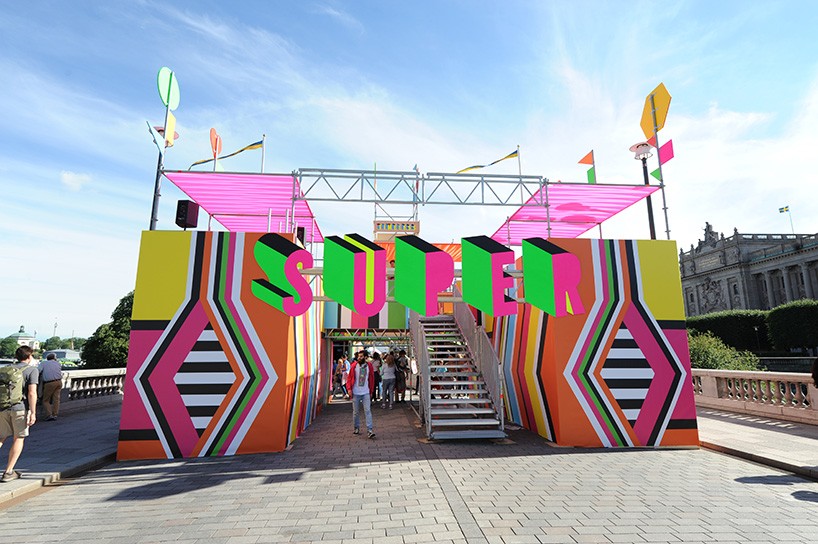 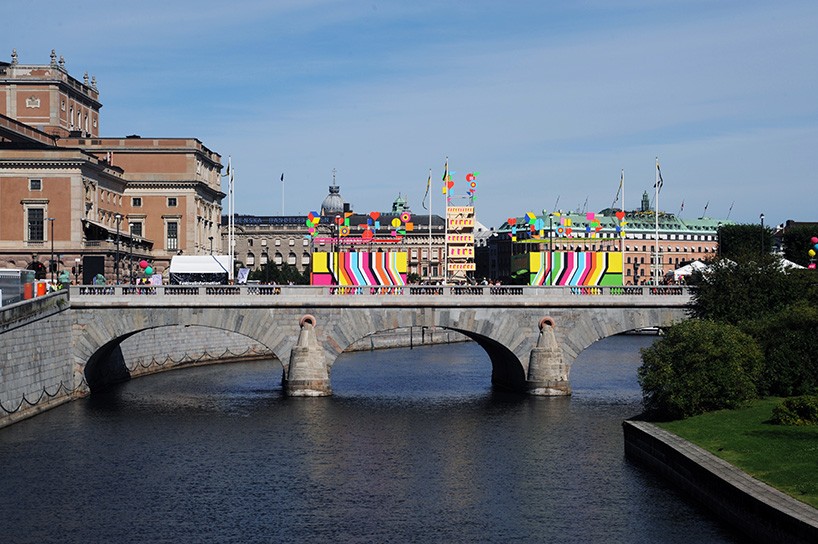 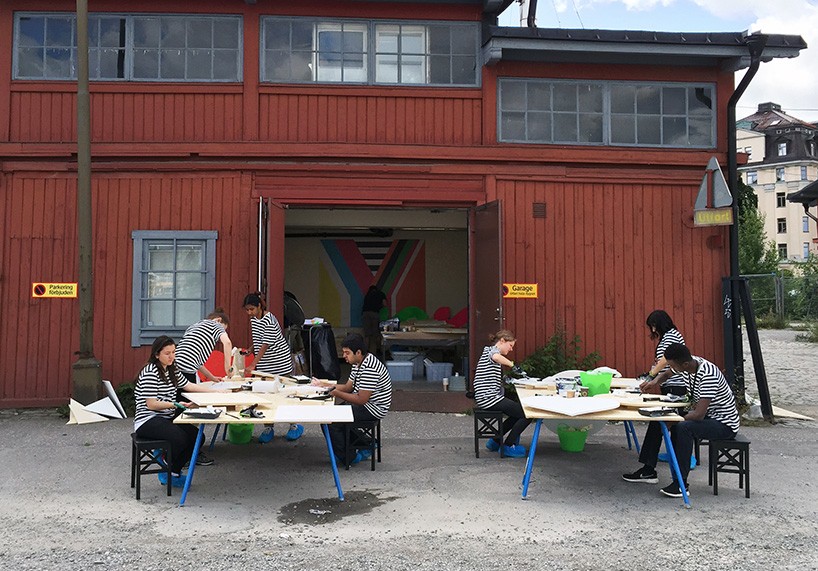 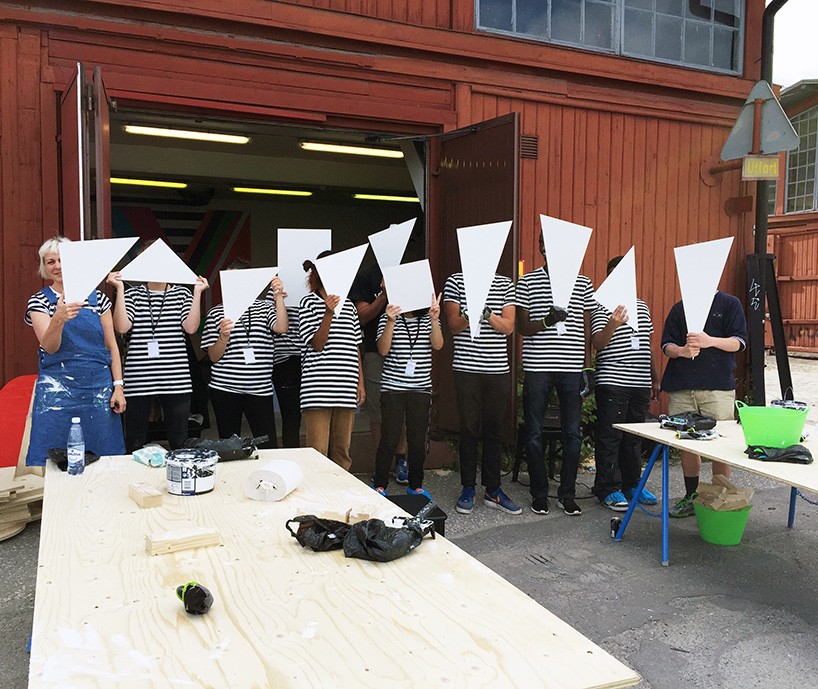 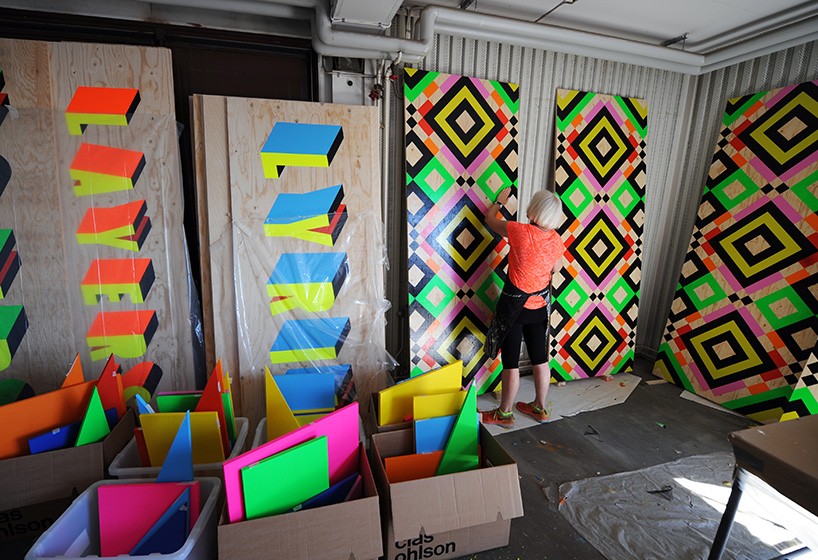 morag myerscough working on patterned panels for the installation