the new school identity by pentagram

pentagram’s paula scher has designed a new identity for the new school, new york that utilises a flexible font to reflect the school’s diverse curriculum and facilities. the identity establishes an iconic brand for the new school as a whole, while also setting apart the university’s different schools, institutes and programs.

the identity introduces a bespoke typeface called neue that is composed of extended letterforms. the typeface is innovative in its combination of regular, extended and very extended widths of the same font programmed together and used all at once.

the new school wordmark and bars appear in black, while the names of the individual schools and programs are set off in red. the university commissioned a pantone color, called parsons red, to honor the design history of its parsons school of design. 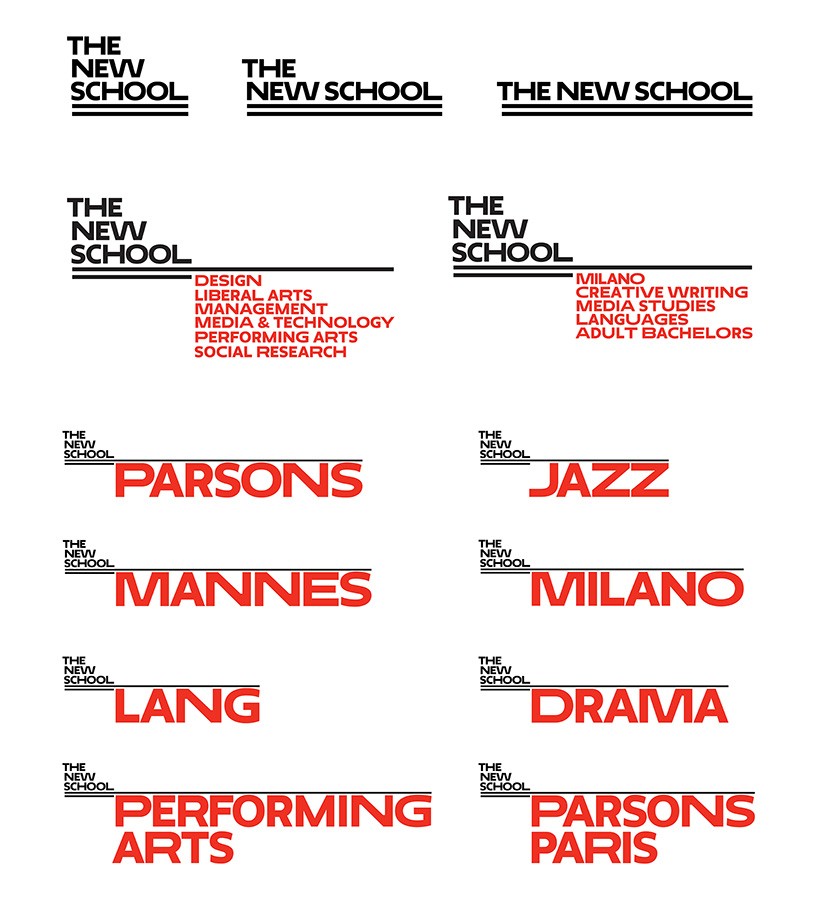 the university needed an identity that would clearly express the nature of its curriculum, which is integrated, flexible and personalized. the system also had to distinguish the relationship between the new school as a university and its constituent schools. in addition, the identity had to be able to evolve over time, as the university is continuously redefining its programs.

animated logo demonstrating the flexibility of the new identity

scher had the idea to create a typographic solution that could be used to differentiate the various schools. the school names are not individual logos, but did need to have their own unique character while remaining connected to each other. to develop the new font she experimented with extending different letterforms for different words. each letter has been drawn in three widths that are used together seemingly at random. an algorithm has been created to facilitate the use of the three widths in headlines and text. 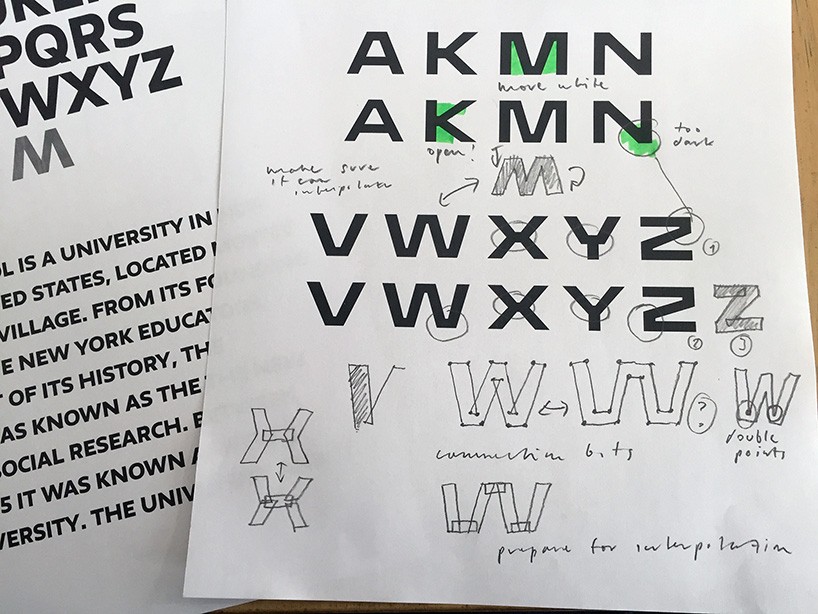 development of the neue font

the aesthetics of the identity system were inspired by the architecture and typography of the new school’s landmark joseph urban building, as well as the new university center, which opened in 2013. neue is a customized version of the font irma, which is utilized in the environmental graphics of the university center and was designed by peter bilak. scher commissioned bilak to draw and program neue. 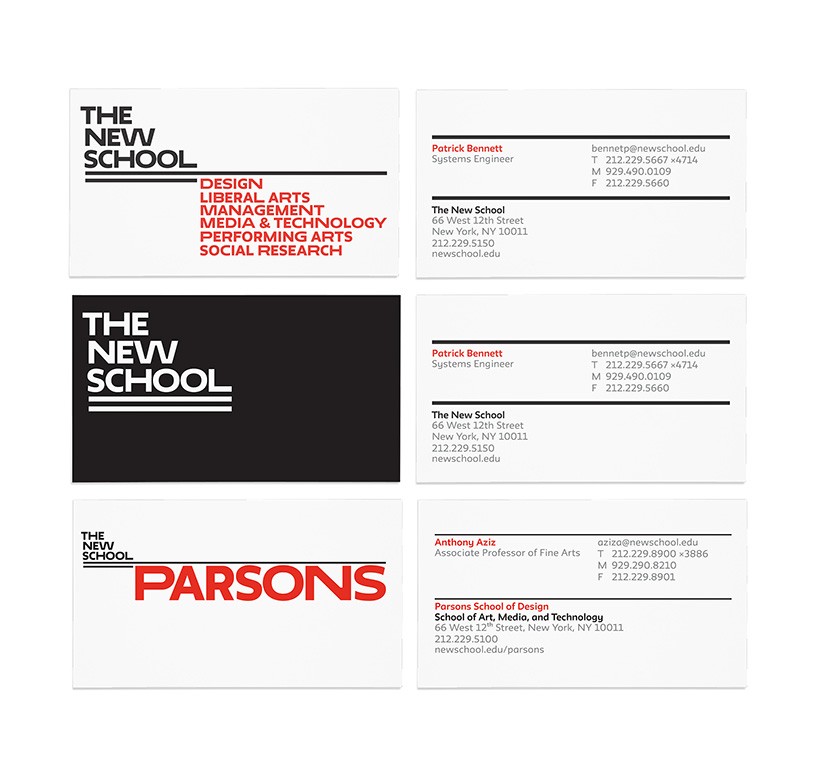 business cards for the different facilities 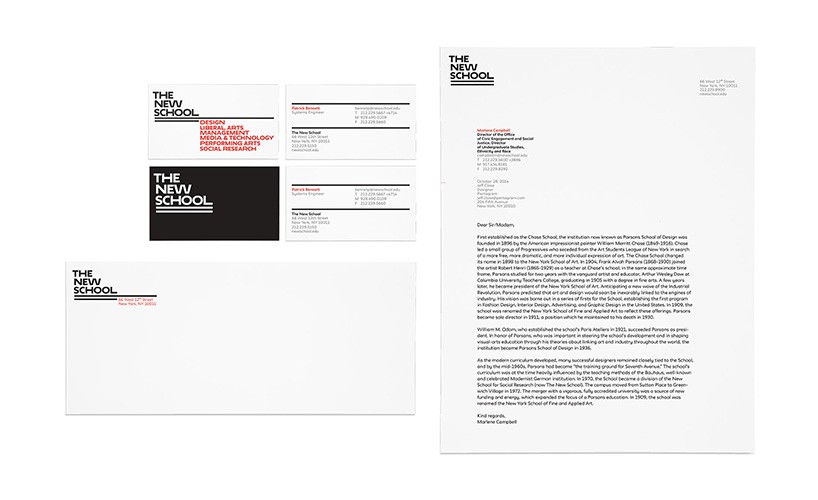 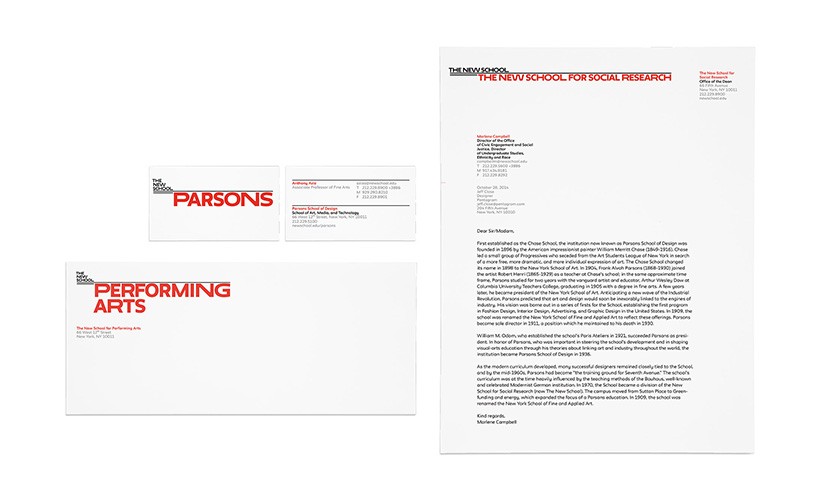 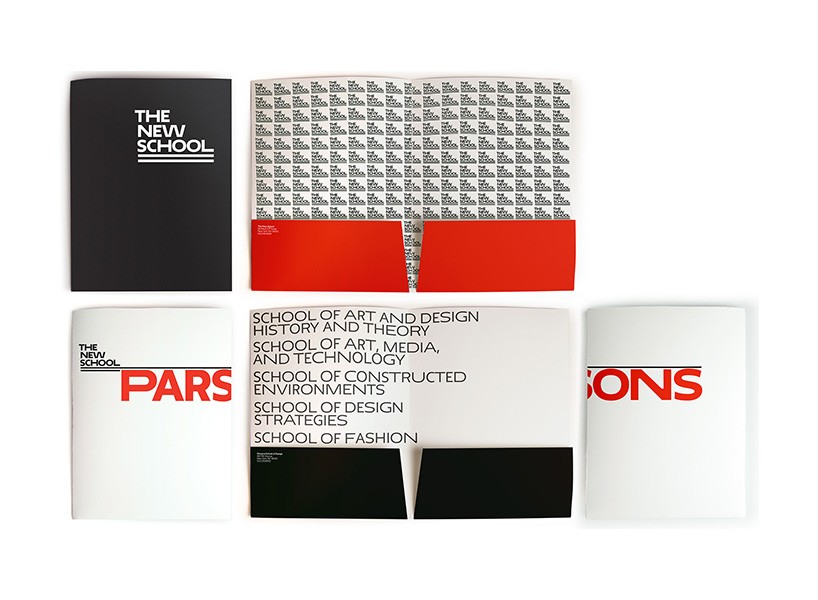 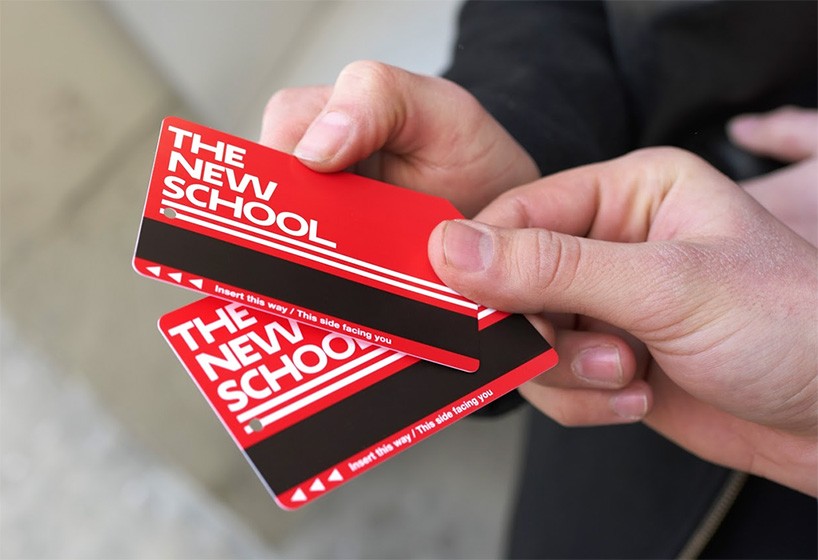 the program will be implemented throughout collateral and graphics for the university and all its schools, utilized in publications, admissions materials, signage and environmental graphics. the in-house team has redesigned the new school website working with scher’s initial guidelines and utilizing neue. here the new identity is used to create a clean, modular format with more intuitive navigation. the various logos act as mastheads that set apart the different schools. on the parsons website, the logo appears in a variety of sizes on different pages, showcasing the scalability of the typography. 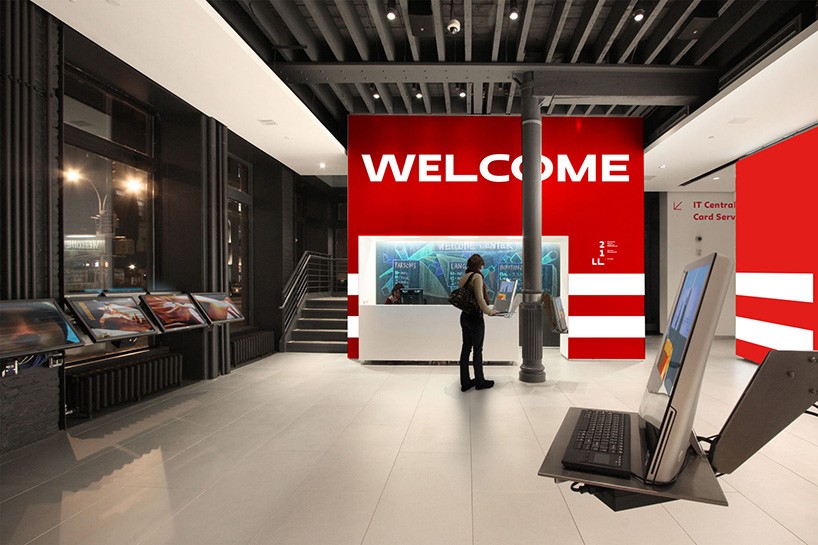 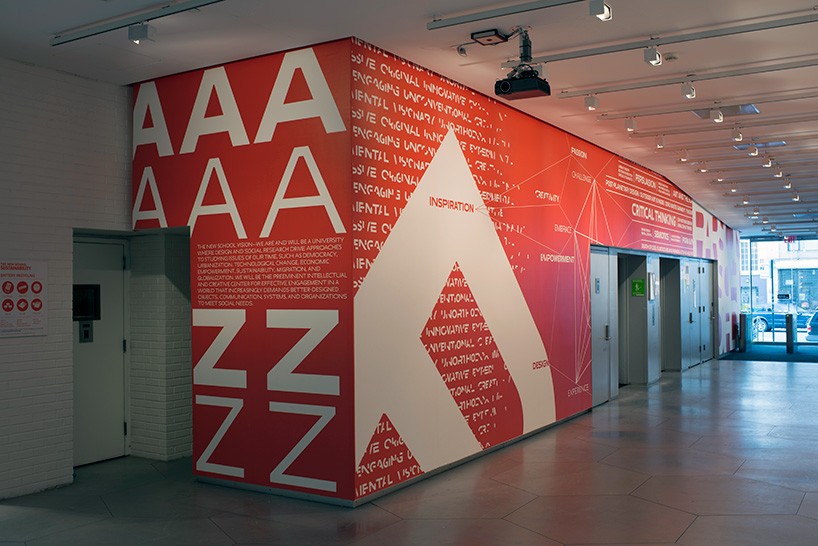 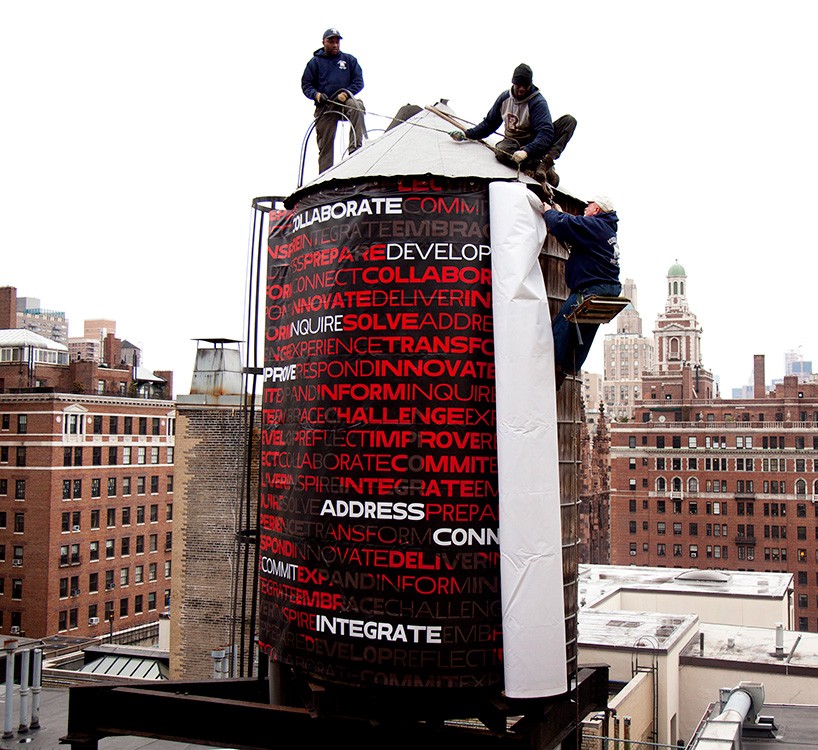 the identity has the potential for future growth and expansion in various applications. to introduce the new identity, scher worked with students at parsons to create a special environmental installation at the sheila c. johnson design center, as well as on the campus water towers. 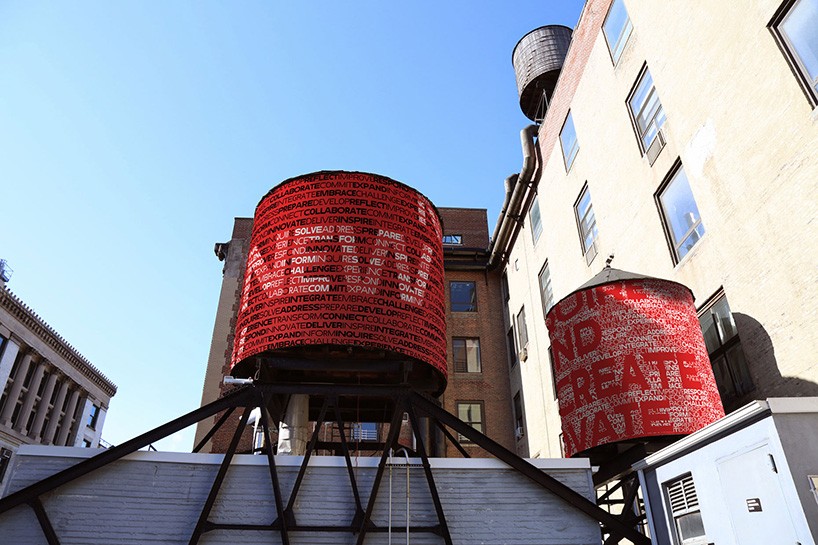 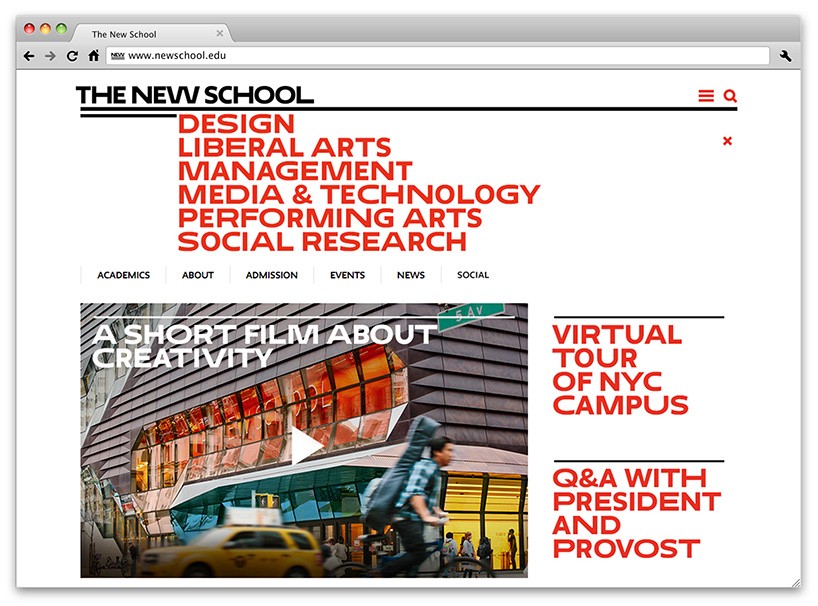