the latest deroll commissions series curated by eizo okada will be exhibited later this month during tokyo design week. the exhibition features two large products created by hisakazu shimizu of sabo studio which respond to the show’s theme, ‘japanese history’. the first product is ‘ii naosuke l’, a piece inspired by checking one’s hairstyle in the mirror. it takes its name from the important political figure ii naosuke form the late edo period known for his promotion of japan to the outside world. the other product is named ‘chonmage piggy bank’ and also makes reference to a historical event. the piece is inspired by an event that took place during the meiji restoration in 1868. as part of the movement to open japan to the world the government ordered all samurai to cut their hair in a western style, by removing the traditional topknot called ‘chonmage’. this design mimics scenes of a samurai cutting off his ‘chonmage’. 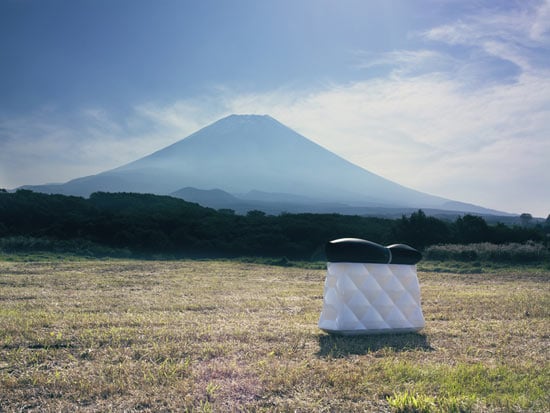 Oct 13, 2021
meet rechair, a 3D printed seat made from plastic yogurt cup waste
russian design studio delo aims to change perspectives of recycled plastic and elevate it to a material on par with wood or metal.
design
0 shares
readers
connections: +1100