the tokyo 2020 olympics finally kicked off on friday, july 23rd to fireworks, a hydrogen-powered olympic flame and empty stadium seats. a year after they were postponed in 2020 due to COVID-19, here’s everything you need to know about the world’s biggest sporting event in the most unprecedented times.

the tokyo olympics and paralympics will take place from friday, july 23rd through until sunday, august 8th, 2021. friday’s opening ceremony inaugurated the two-week-long event and the closing ceremony is set to take place on sunday, august 8th at 8PM in japan (BST +8). check out the official games website here to find the full schedule of ceremonies and sporting events. a number of broadcasters are live streaming the games, from NBC in the US to BBC sport in the UK. 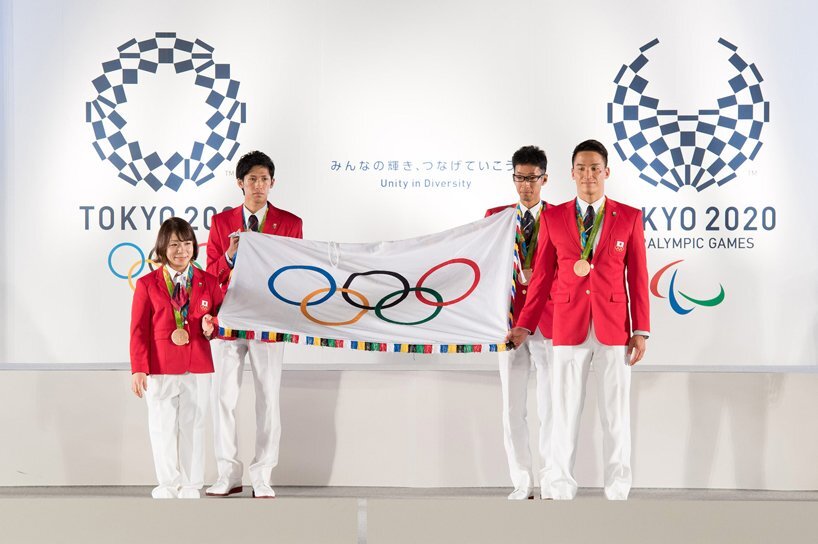 the tokyo olympics were postponed in 2020 due to COVID-19

due to the ongoing coronavirus, the games are taking place without spectators — neither international tourists nor locals. the official decision came earlier in july following the declaration of japan’s state of emergency running from july 12 to august 16, covering the 16 days the olympics will be held.

‘it is regrettable that we are delivering the games in a very limited format, facing the spread of coronavirus infections,’  said seiko hashimoto, tokyo 2020 president.

notwithstanding the missing audience, the athletes will be competing in a number of architectural gems. the main venue is the new national stadium in tokyo designed by kengo kuma. conceived as a ‘living tree’, the façade consists of overlapping, multi-layered eaves made of wood gathered from japan’s 47 prefectures while more than 47,000 medium and small-sized trees have been planted around the stadium. see designboom’s exclusive first images of the arena here, and read our recent interview with kengo kuma here. 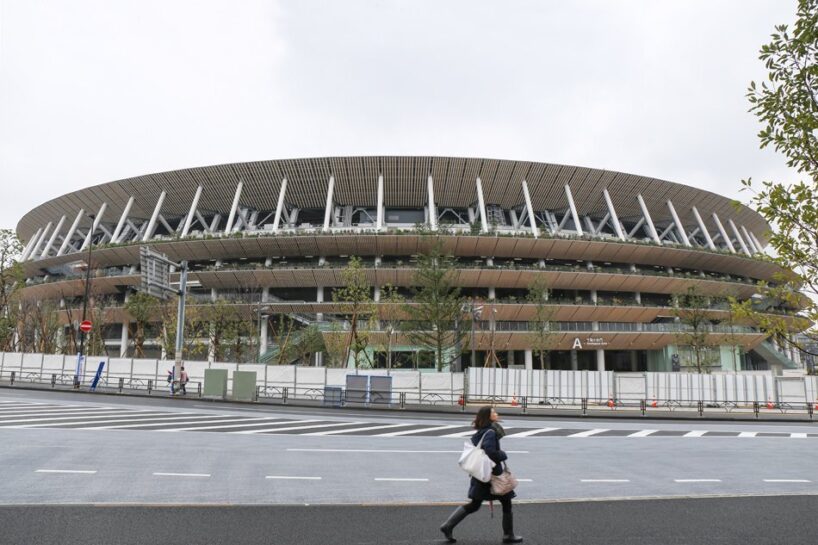 the new national stadium in tokyo

other venues include a NIKKEN SEKKEI-designed gymnastics center and the olympic village plaza, which were both constructed from sustainably sourced timber. the gymnastics center was conceived as a ‘wooden vessel floating in the bay’ and the structure utilizes glulam timber to achieve a column-free space that spans a huge 90 meters (295 feet). the arena will initially function as a sporting venue, before being converted into an exhibition hall after the games. 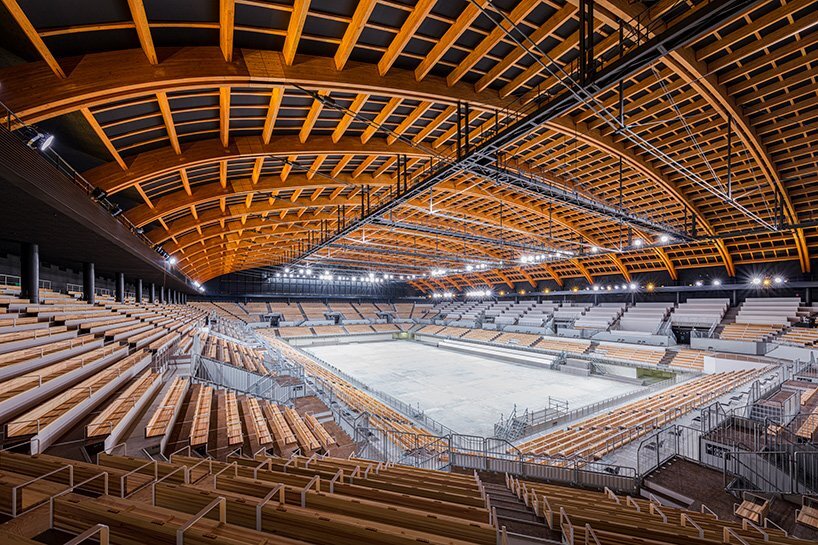 the olympic village plaza was constructed using timber from sustainable sources donated by 63 participating municipalities across japan as part of the ‘japanese lumber relay,’ an initiative launched by the tokyo 2020 organizing committee. once the games are over, the wooden structure will be dismantled and returned to the municipalities that donated it. the timber member will be repurposed in local facilities that will help to commemorate the games such as public benches or parts of school buildings. the lumber relay project marks just one of the strategies planned under the olympics sustainability goals. other strategies include using recycled materials, the use of 100% renewable energy and utilizing existing venues. 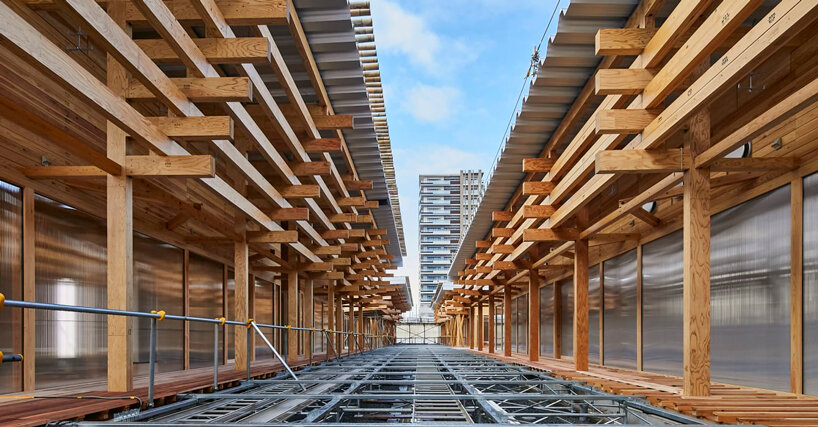 in addition to traditional timber architecture, the tokyo 2020 olympics also highlights japanese design. the opening ceremony unveiled an orb-like olympic cauldron designed by nendo to symbolize the sun. 10 panels making up the large white structure opened up to the ceremonial fire and to welcome the final torchbearer, tennis player naomi osaka. the olympic flame is the first to be fueled by hydrogen. 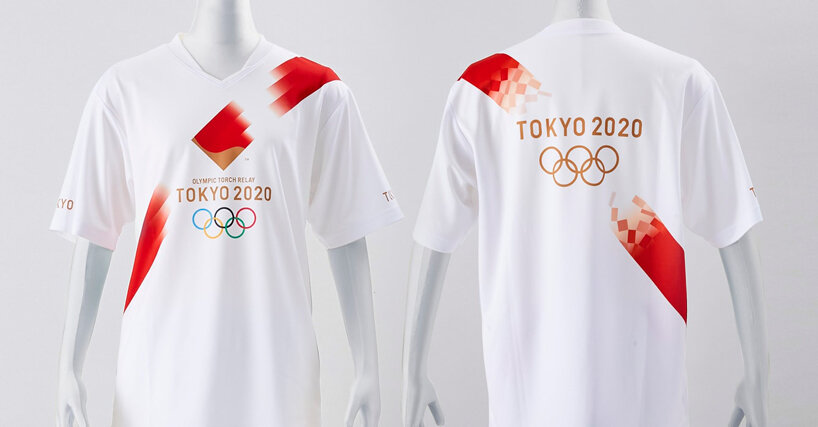 the torchbearers uniform made from recycled plastic bottles

recycled plastic has also been utilized for the athletes’ podiums for the first time in the history of the games. used plastic and plastic marine debris were collected by members of the public and repurposed to create the geometric, chequered podiums designed by tokolo asao. the podiums were 3D printed with the help of professor tanaka hiroya of keio university. 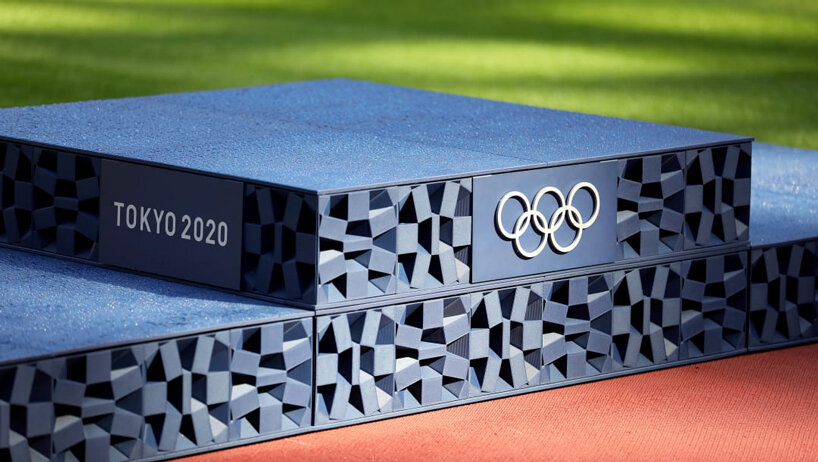 the olympic podiums are made from recycled plastic

once on the podiums, winning athletes will be awarded olympic medals made from recycled phone metals. designed by junichi kawanishi to look like ‘rough stones that have been polished’, the 5,000 gold, silver and bronze medals have been made from 100% of the metals collected from used electronic devices. the organizing committee for the games collected the old gadgets from across japan over the past two years. the initiative intends to promote a more sustainable society while celebrating the great sporting achievements of the 2020 olympics. on saturday july 24th, chinese air rifle shooter qian yang was presented with the first recycled gold medal after winning the women’s 10-meter air rifle. 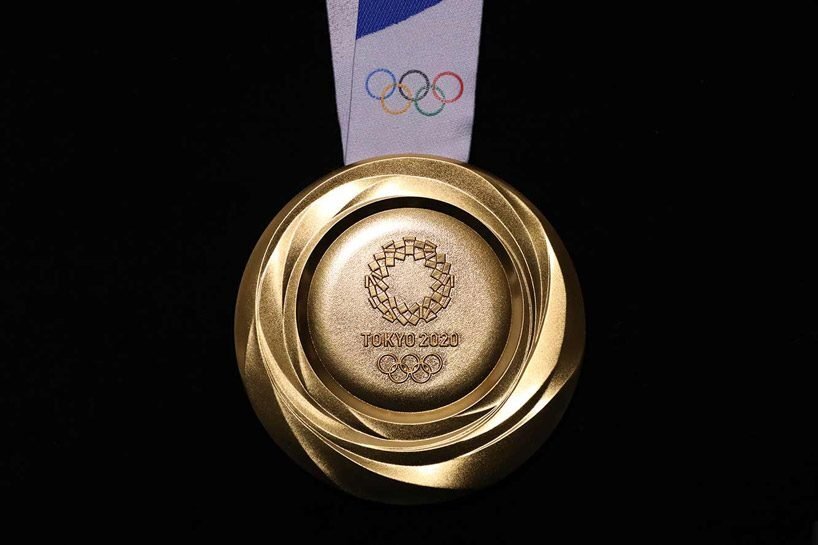 and when they’re not winning medals, the athletes will sleep on cardboard beds as part of the olympics’ plans to be more environmentally friendly. although, some have claimed the cardboard beds are an attempt to prevent any intimacy between the athletes during the games, therefore preventing the spread of COVID-19.

all of the bed frames will be made from high resistance cardboard, which will be able to support weights of up to 200kg, more than any athlete weighed at the 2016 olympics in rio. after the games, the beds will be recycled into paper products and the mattress components into new plastic products. 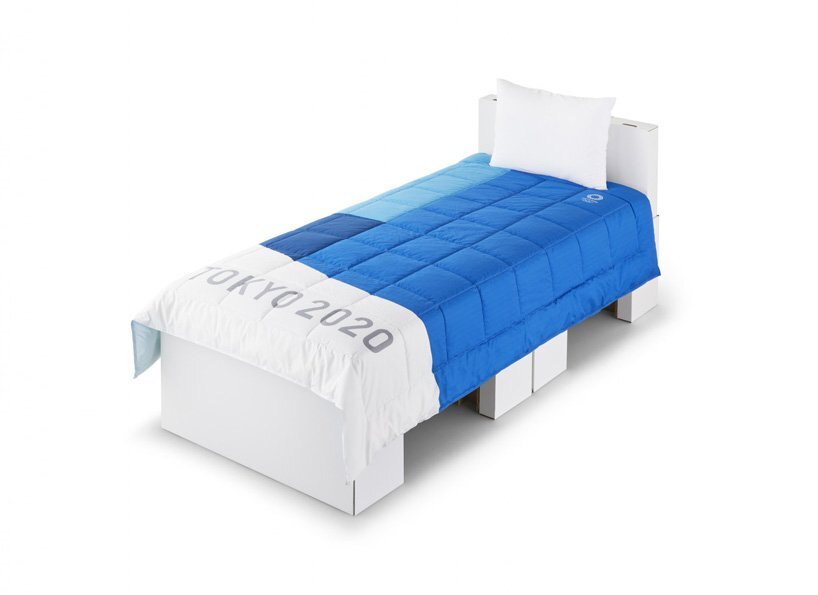 the cardboard bed for athletes

despite the cardboard beds and recycled medals, some critics have voiced their skepticism that such a massive international event can never be truly sustainable. in a 2020 article, jules boykoff and christopher gaffney dubbed tokyo 2020 as the ‘most egregious greenwash in the history of the olympics’.

more recently in april 2021, a study published in nature offered a scientific evaluation of the games’ sustainability compared with previous years. the analysis showed that the tokyo 2020 olympics and paralympics are the third least sustainable olympic games since 1992, followed by rio de janeiro in 2016 and sochi in 2014.

‘the large expenditure and exceptional political leverage of the olympic games present a chance to pioneer necessary sustainability transformations well beyond the trillion-dollar event industry,’ say the researchers from the university of lausanne.