the story goes that before the tokyo subway system was used as a tunnel system, the underground spaces were inhabited by almost forgotten alien species. this ancient species was divided into two groups: the observers and the inter-actors.

tokyo reflections is a temporary interactive installation by cheungvogl for the JR platform in tokyo station, japan where the public is able to experience the typical behaviors of this nearly forgotten species. one can participate as an ‘inter-actor’ in an open communicative way, encouraging gatherings in small groups. on the other hand, you can take the place of the observers which just stand around the inter-actors, but documenting more than participating in the activity viewing everything from the underside of their eyes. it is believed that these species failed to reproduce as it mixed its genetic code with the human species and observing genes became too dominant. the theory is still awaiting scientific proof.

alongside the installation, white light arrangements will be concentrated on the rail track area, replacing the current dull light boxes. the backwall will be covered by a translucent membrane, reflecting diffused light onto the platform area. 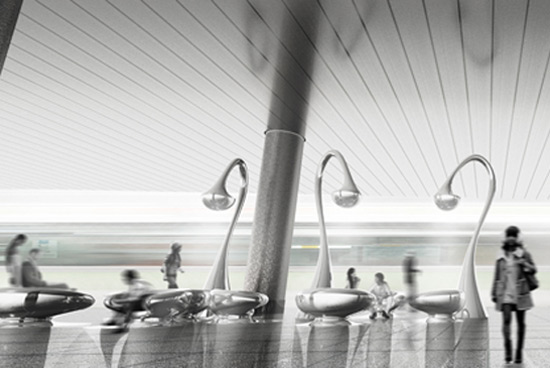 a rendering of the tokyo platform with observers and inter-actors