for the 8th dream car art contest, toyota has invited children from all over the globe to share their ideas about the future of mobility by drawing their ideal vehicle. the results prove that the minds of young creatives are not only brimming with illusions of fantasy and fun, but are also crafting in-depth solutions to real-world problems and integrating high-tech systems in their designs. the automobiles are innovative and original: from a car that fights pollution no matter the environment, to a new generation of school transportation and a vehicle that turns humidity into water.

from now until august 26th, toyota is hosting ‘dream car of the day‘, a 90-day campaign which showcases the finalist’s artworks. each drawing has been brought to life in a tiny animated vine video, which web-visitors can enjoy after they ‘like’ the design. take a look at a few of our favorites, below. 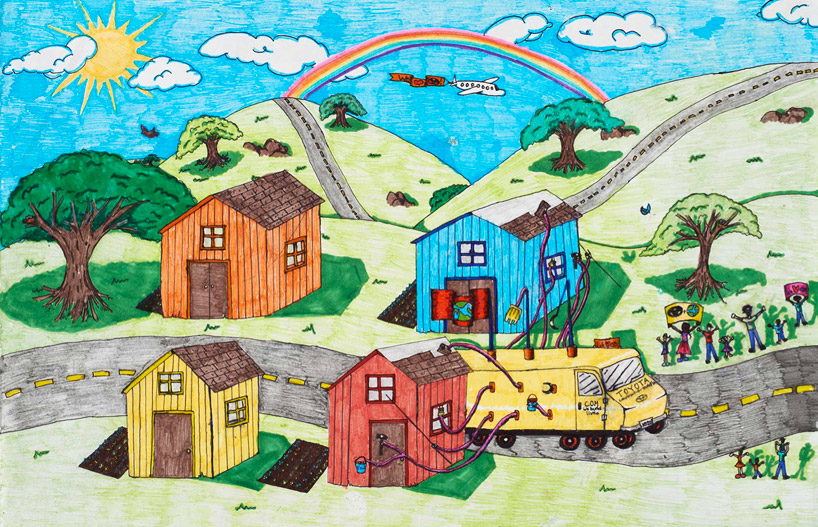 this ‘3d-printer car’ is shown building houses extremely quickly using its long, thin arms made from wires. the scene where the arms can be seen stretching out at will was filmed by cutting the wire little by little and then playing the footage backwards. the houses were built in five stages in a fun, rhythmical way. 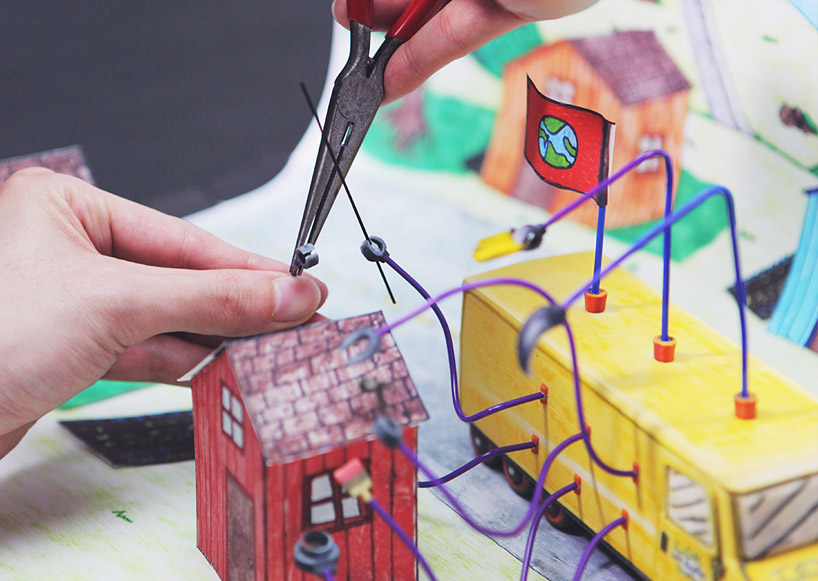 ‘happiness carriage’ by aysha mohamed abol fateh aged 15, saudi arabia: carriage dedicated to school children. the idea is to shorten time and effort and provide comfort for kids. the basic carriage stand in specified parking and every children have a small vehicle driven by one of their parents. each small vehicle is programmed to reach its specified point then it’s connected with the base carriage, and when all vehicles are connected the carriage go to school. by that the children’s time that is wasted in bus in the morning and noon is abbreviated and it reduces the traffic. 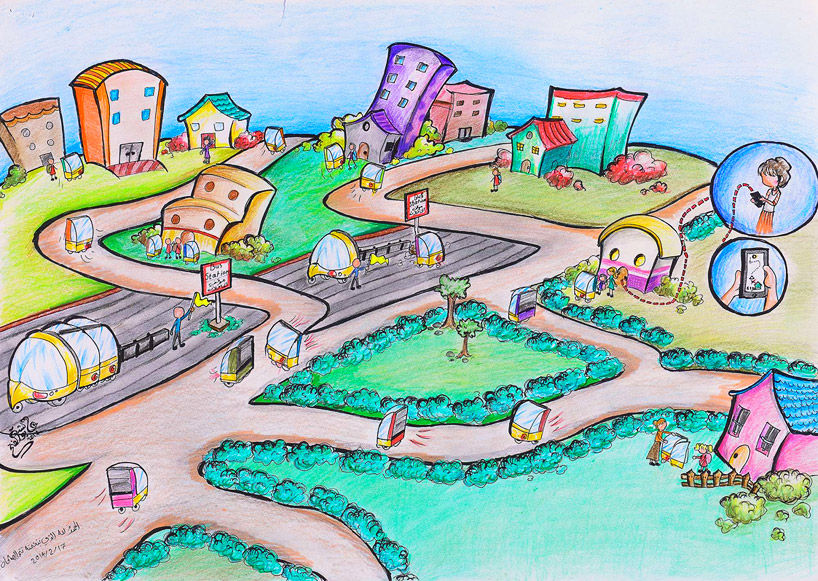 this stop motion animation carefully recreates the imaginative and lively concept of the original artwork. colorful dream cars make their way to a bus stop, where they combine to form a dream bus. 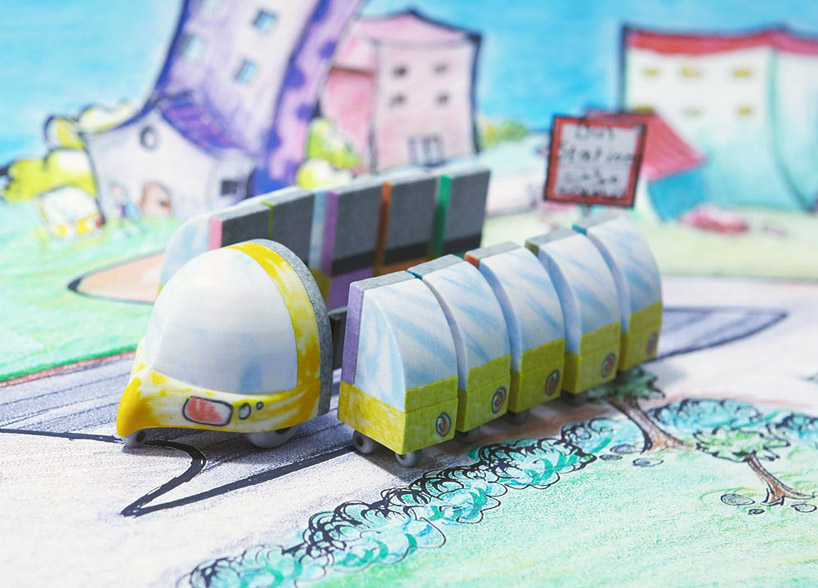 colorful dream cars make their way to a bus stop, where they combine to form a dream bus.

‘swallows broken plastics into building blocks’ by sumeeth singhaged 10, south africa: as mentioned my car devours any broken plastic items and turn them into good building blocks that can be used for housing purposes. we clear the beach areas, parks and gardens, river banks and even along the roadside to keep our environment clean. irresponsible people continue pumping these broken items all over the place. 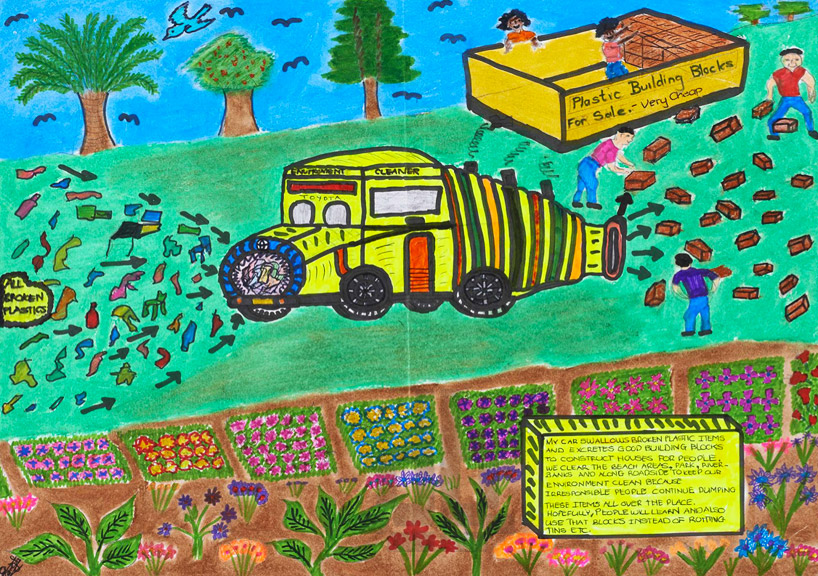 the movement of a car that takes broken, misshapen plastic to create blocks is being shown here. the car was carefully modeled in order to maintain its unique and fun qualities. colorful pieces of plastic were created using 3D printing, and the blocks were made using polystyrene board. 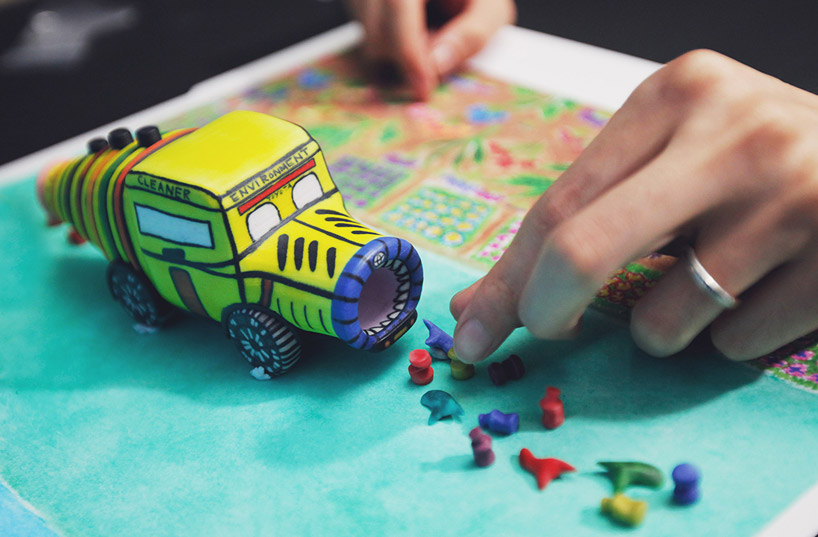 colorful pieces of plastic were created using 3D printing, and the blocks were made using polystyrene board.

‘toyota aqua tour’ by deepak saji kumaraged 14 from qatar: ‘toyota – aqua tour’ is a car specially designed to drive in humid atmosphere. in near future, water is precious. therefore it will be known as blue gold. the car is designed to get water from humid atmosphere. the evaporator is specially designed for attaining dew point from the humid air so that maximum condensed water can be obtained and stored and used for irrigation as well as potable after purification. thus toyota aqua tour car can change the desert into greenery. ‘toyota – aqua tour’ car is suitable for the countries having high humid temperature. in countries like qatar, oman, chile, venezuela, this concept can be applicable as the humid in the atmosphere is high. it is also a possible solution to stop the end of water from the world. with part like evaporator, condenser, capillary tube (adjust the pressure), water can be obtained. 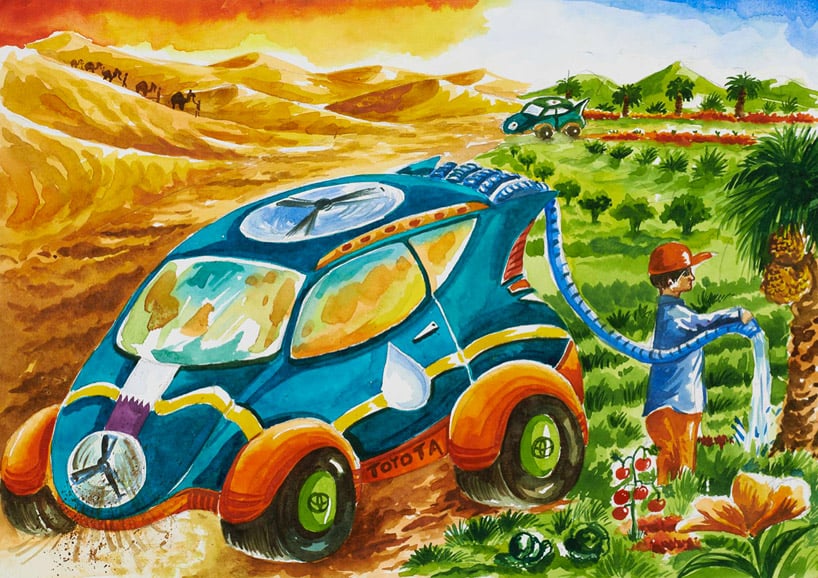 this animation shows the transformation of a barren desert into a lush green landscape made possible by the car’s unique ability to produce water from the moisture in the air. the car in the scene is a 3d model recreated from the original artwork that is animated using pins and plastic for the propeller. the palm tree stands up like in a pop-up book, while the continuous flow of water from the hose is animated by looping three frames continuously. 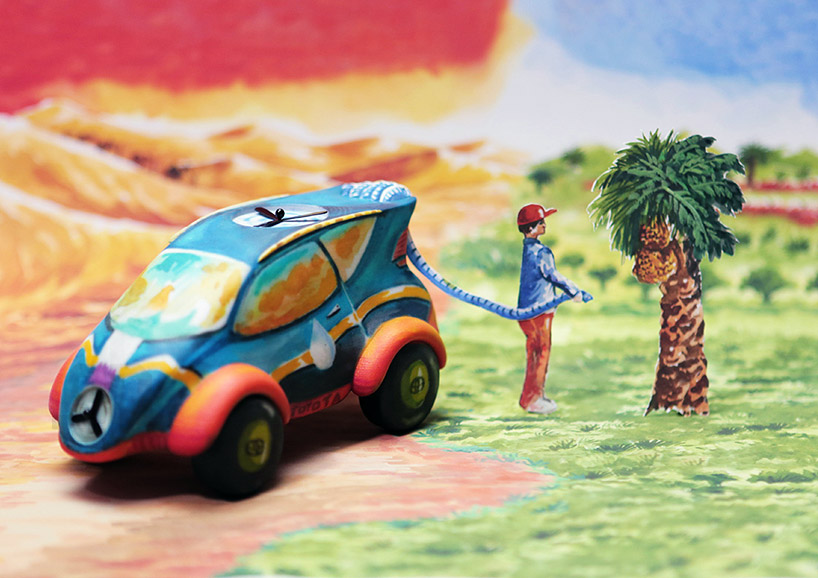 ‘the dairy cow car’ by sudlert lertsudwichai aged 8 from thailand: thailand still has many poor people mainly in upcountry and rural provincial area. due to their economics restraints, most of them are malnutrition, especially the children from these families. this dairy cow car that i designed will travel to the area in need in order to produce fresh milk for these children so they can be healthy. 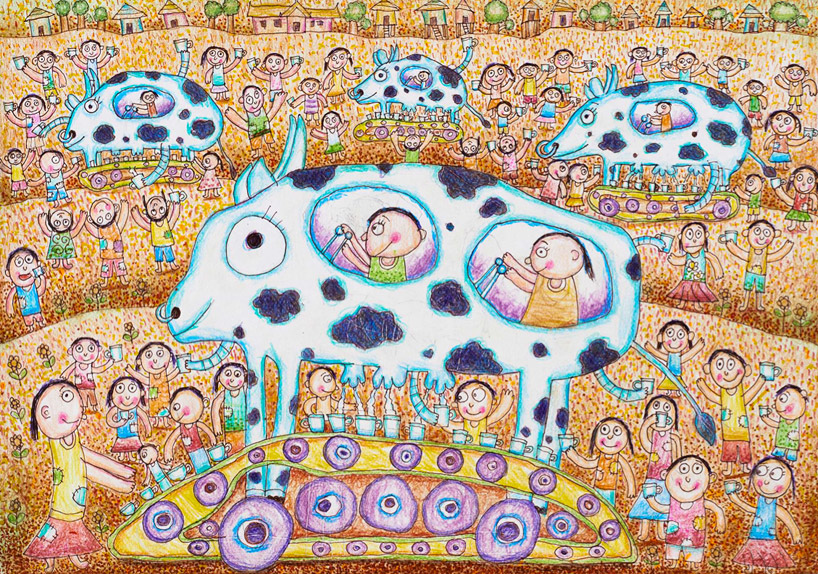 the dairy cow car was recreated using a 3D printed model and comes to life with stop-motion animation. many of the mobile pieces — including the drivers and conveyer belt — have been 3D printed and moved separately, giving extra dynamics and excitement to this short feature. 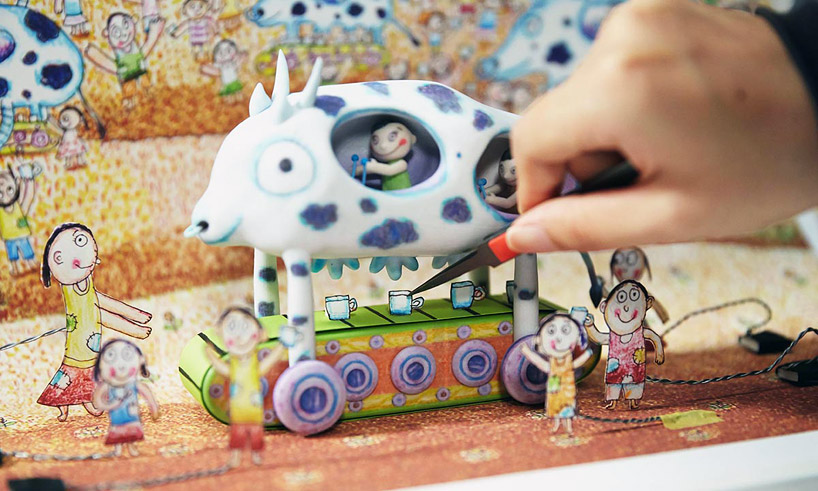 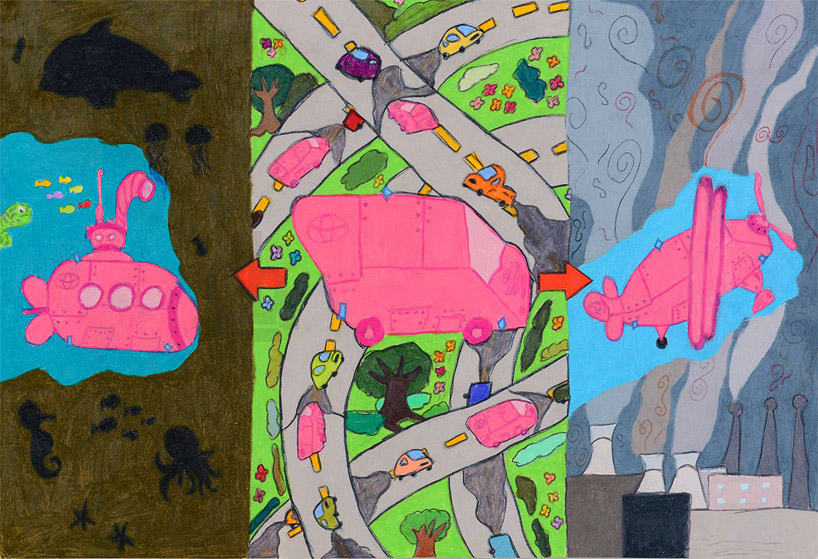 hand-drawn animation was used to recreate the inspiring form of this pink dream car which changes shape from a submarine, into a car, and then into an airplane, while erasing pollution wherever it goes. the movie loops seamlessly while the illustrations add a distinctively smooth feel to each motion. 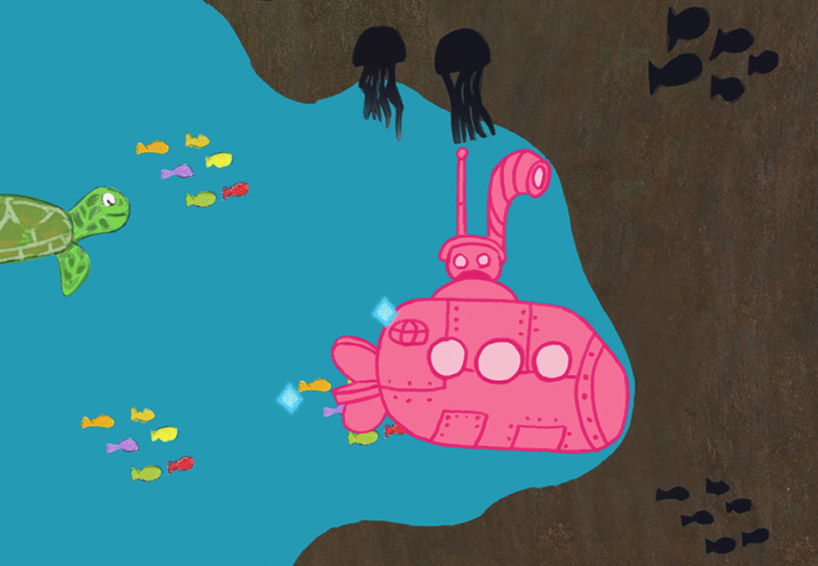 hand-drawn animation was used to recreate the pink dream car

May 04, 2021
jacques herzog on architecture as a karmic discipline + shaping cities for friedman benda's 'design in dialogue'
in an hour long conversation, the founding partner of eminent architectural firm herzog & de meuron spoke about his firm’s practice and legacy, and the cultural role of the architect today.
design
462 shares
connections: +210