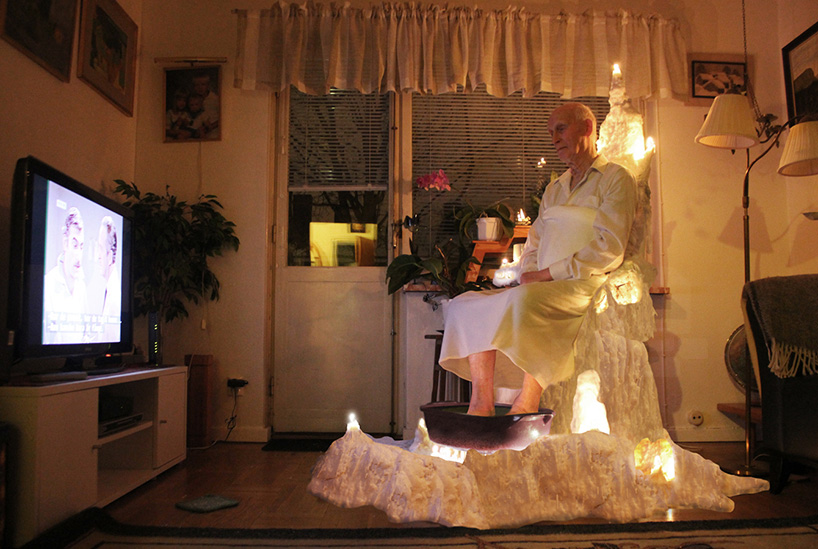 for the design of the ‘throne of flames’, ulf mejergren architects go into detail with background information: ‘an old client recently contacted us with the wish that we would create something special for him at his new apartment. he had sold his house in the north of sweden and had just moved to a small flat in a suburb to stockholm to be closer to his children, his grandchildren, and his great-grandchildren. an injured hip has made walking more difficult so most of his days is spent in front of the television watching old western movies while drinking coffee and eating sausage. he said he would want some sort of furniture that you almost could live in and at the same time become a centerpiece in his rather mundane apartment. ‘but it shouldn’t be too comfortable, I want to keep my back straight,’ he added.’

the process that followed involved spending several days with the man in order to observe his routines and habits. when he moved, he left multiple items at his previous location, but also took pieces that didn’t have space for in his new flat. a decrepit office chair became the base of the design. 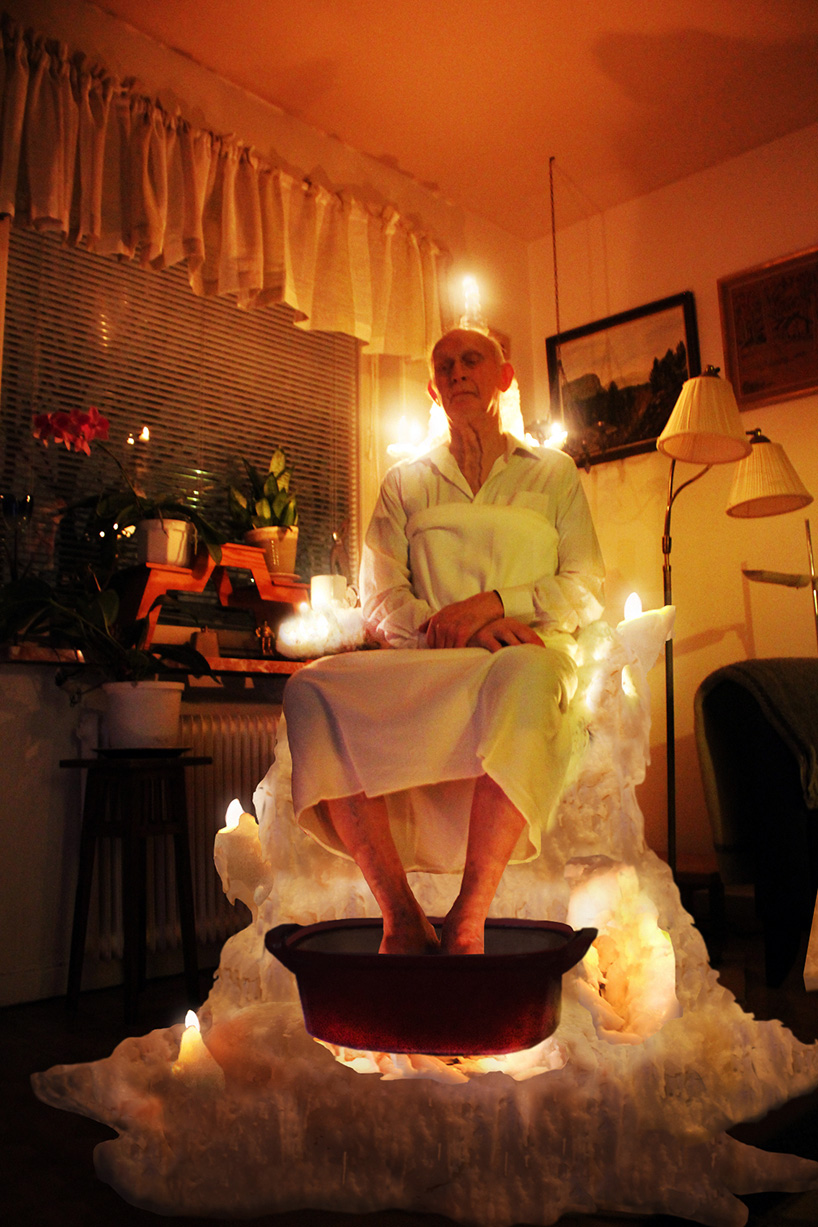 in order to add to its functionality, the team wanted to adjust its details to cater his daily needs: ‘his means of nutrition is a very basic thing nowadays. he gets by with some sausages that he cuts with a knife and some coffee with a little vodka in it now and then. the coffee has the be hot, so we transformed the right armchair so it could support a large coffee mug that would be kept warm with the help of a candle underneath it, always keeping the small sips nice and warm.’

an extension to the armchair is a steel bracket with an unknown past that is transformed into a vodka rack for special occasions. his extensive consumption of movies is taken into account with a side compartment that holds the weekly TV magazine and the remote control. this is accompanied by the fact that he misses his old fire place that kept his cottage in the wood warm, leading ulf mejergren to the final scheme. 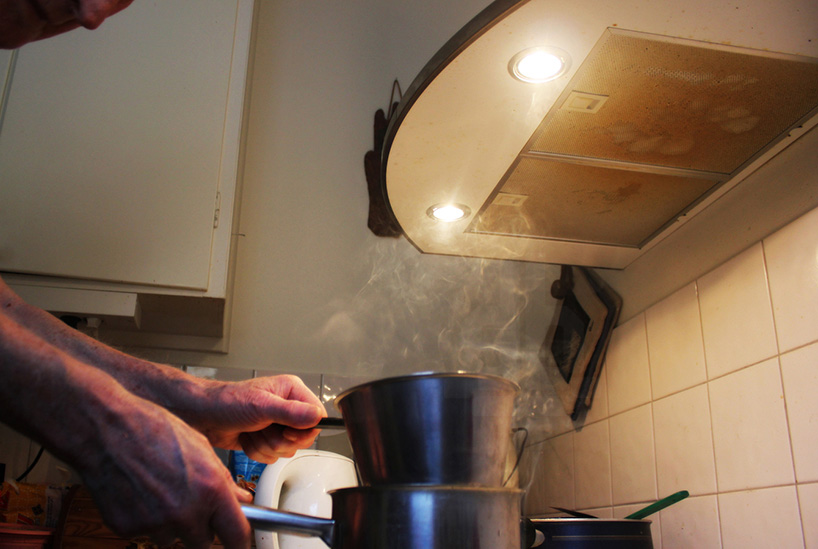 the work is a continuation of the studio’s partnership with the client, as they had previously made a custom bathtub together from welded metal scraps. ‘back in his cottage we had a variety of tools to create the exact product we wanted. in this limited space, the only interesting tools we had to work with was the standard kitchen stove,’ said the firm. therefore, a primitive method was used in which melted candle wax was poured over the chicken wire-infused construct. newspapers were then combined with potato flower to form a type of papier-mâché that smoothens the structure while holding all of the materials together.

once the wax was melted, it was poured onto an oven plate and placed on the balcony for several minutes, allowing it to stagnate into entire sheets. the structural analysis called for certain portions to have a thicker crust, preventing any cracking from occurring along the exterior surface. candlewicks were later put at various locations to enhance the overall experience and aesthetic. 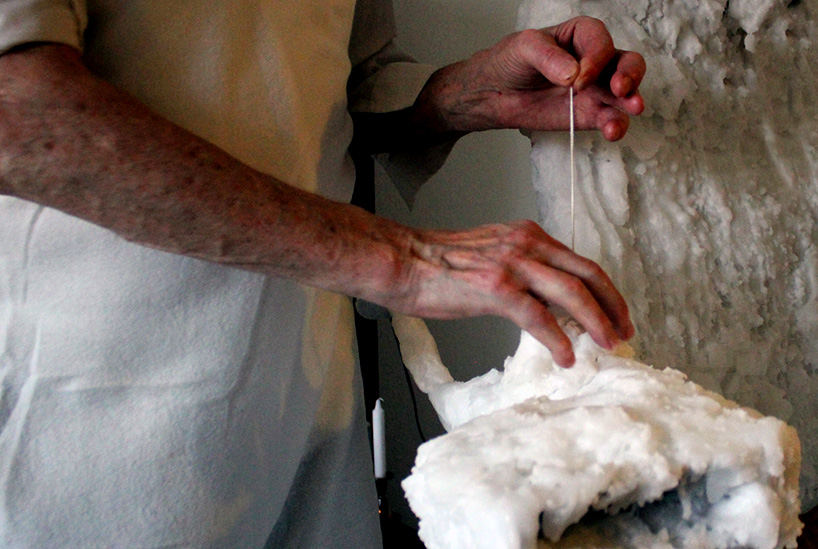 making mounds of wax around the candle wicks diagram showing the procedure of the design 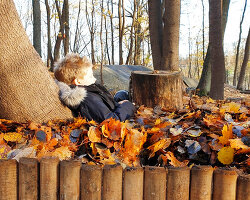 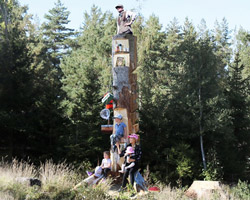 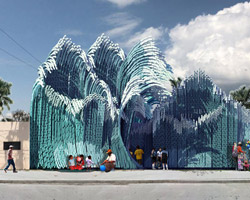 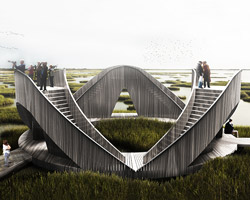 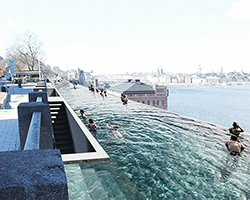 May 19, 2017
UMA proposes public infinity pool in stockholm, along the baltic sea