BEYOND – the veuve clicquot journey by fabrica

on the occasion of milan design week 2016, veuve clicquot appointed the unconventional creativity of fabrica, the communication research centre of the benetton group, to celebrate the 200th anniversary of its first design invention that revolutionized the méthode champenoise: the table de remuage — the forerunner of today’s riddling table in which bottles are tilted and turned to obtain a clear, pure wine. above all, the special affair payed homage to the intelligence and determination of veuve clicquot’s inventor, madame clicquot, who, widowed at 27, took over the reins of her husband’s business, becoming one of the first female entrepreneurs of the modern age. 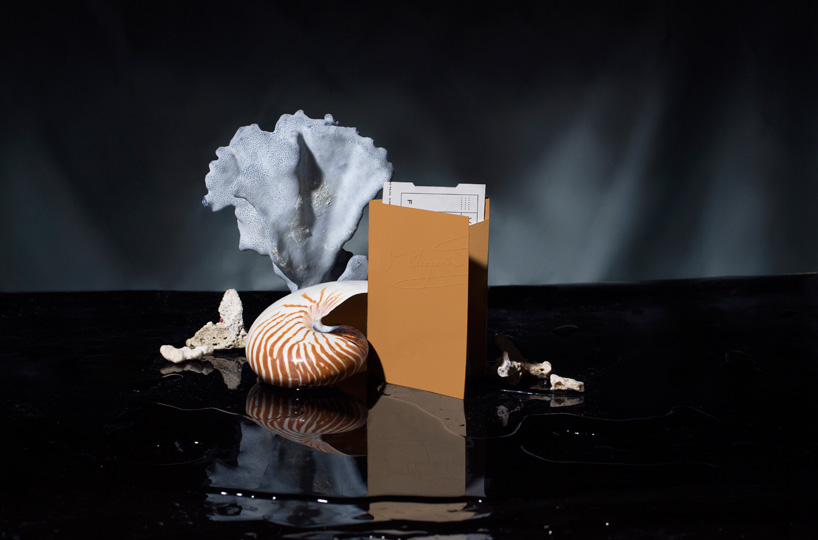 ‘BEYOND’ explored three environments of crucial to the success of veuve clicquat, starting with the abyss…

fabrica makred the special anniversary with a full-immersive experience that brought people ‘BEYOND’ — taking them on a veuve clicquot journey through real and imagined landscapes in an exclusive setting that was located within the royal pavilion of milan’s central station. 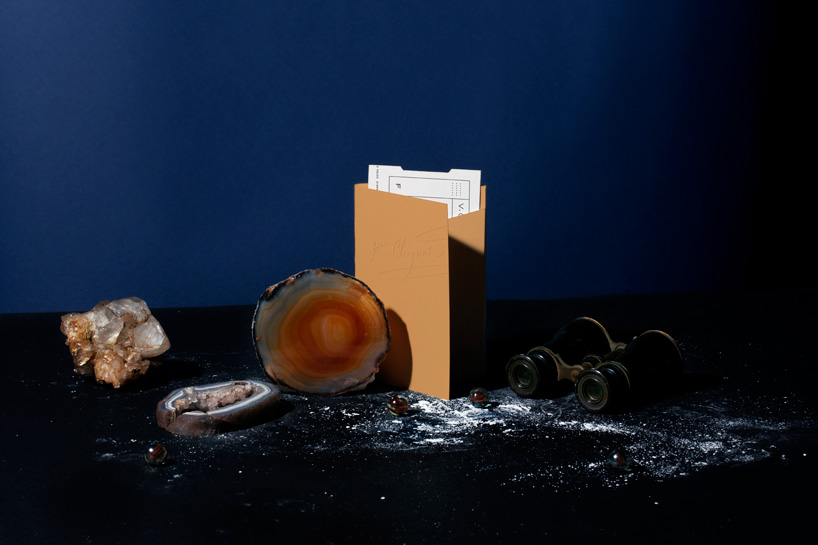 the ambience of ‘BEYOND’ took visitors from the depths of the abyss to the majesty of a starlit universe, by way of the stunning chalk caves of the champagne region in france. through these three environments, influenced by the visionary madame clicquot and her desire for exploration, fabrica realized an atmosphere that recalled the places, moments and facts that have made veuve clicquot one of the most important champagne houses today. 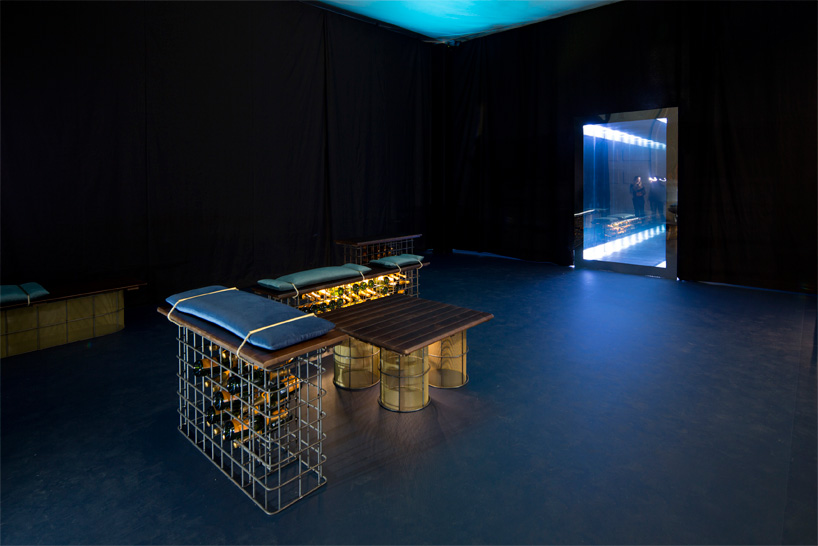 ‘the abyss’ has a direct link to veuve clicquot’s foundations, when philippe clicquot established a ‘négoce de vins’ that would go beyond frontiers; choosing the anchor, a symbol of hope, as the trademark for the corks of its bottles. the sea was crucial to the house’s success in russia, when in 1814, madame clicquot bravely challenged the trade embargo of the time and managed to bring her wines to the court of the tsar in st. petersburg. then in 2010, the sea cast up bottles of veuve clicquot that had been lost in a shipwreck off finland’s aland islands. despite having been on the seabed for almost two centuries, the bottles were in an excellent state of conservation, proving the exception quality of veuve clicquot’s wines from the earliest days. 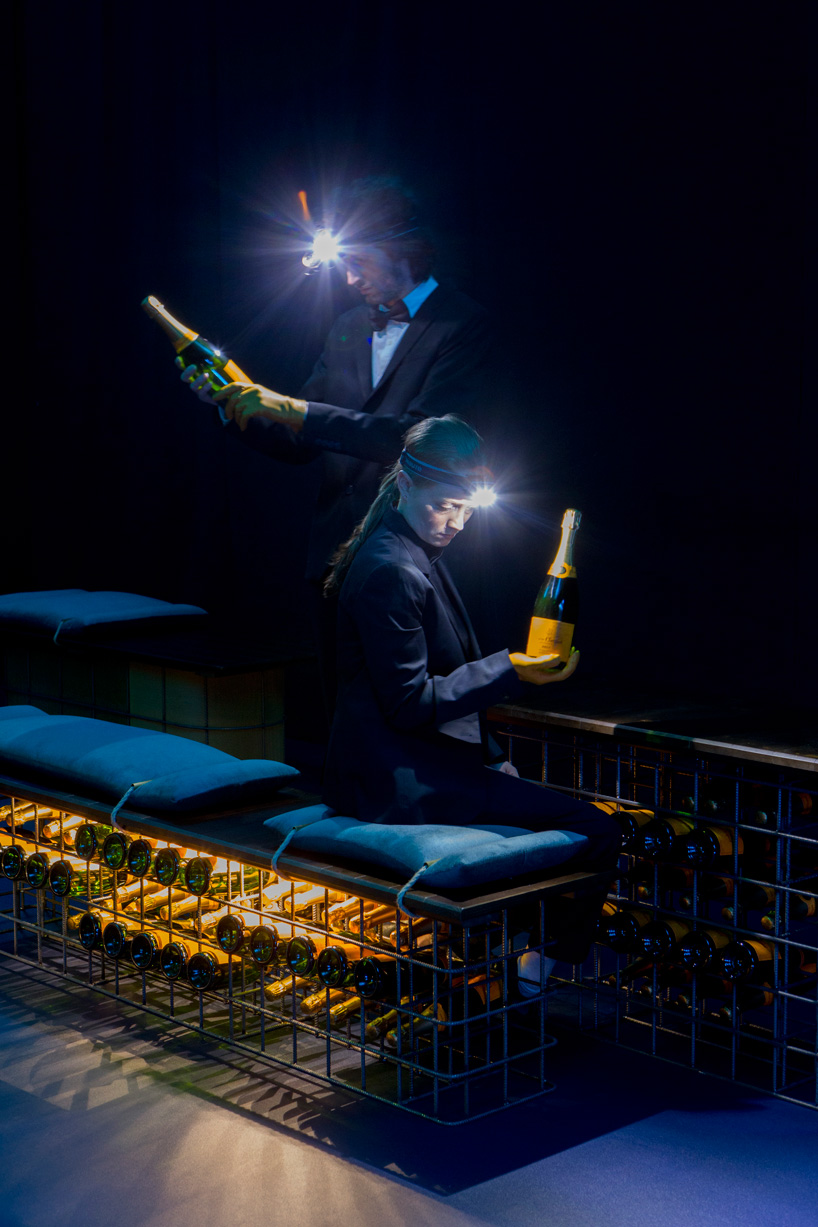 ‘BEYOND’ was delivered through experiences, performances and sound 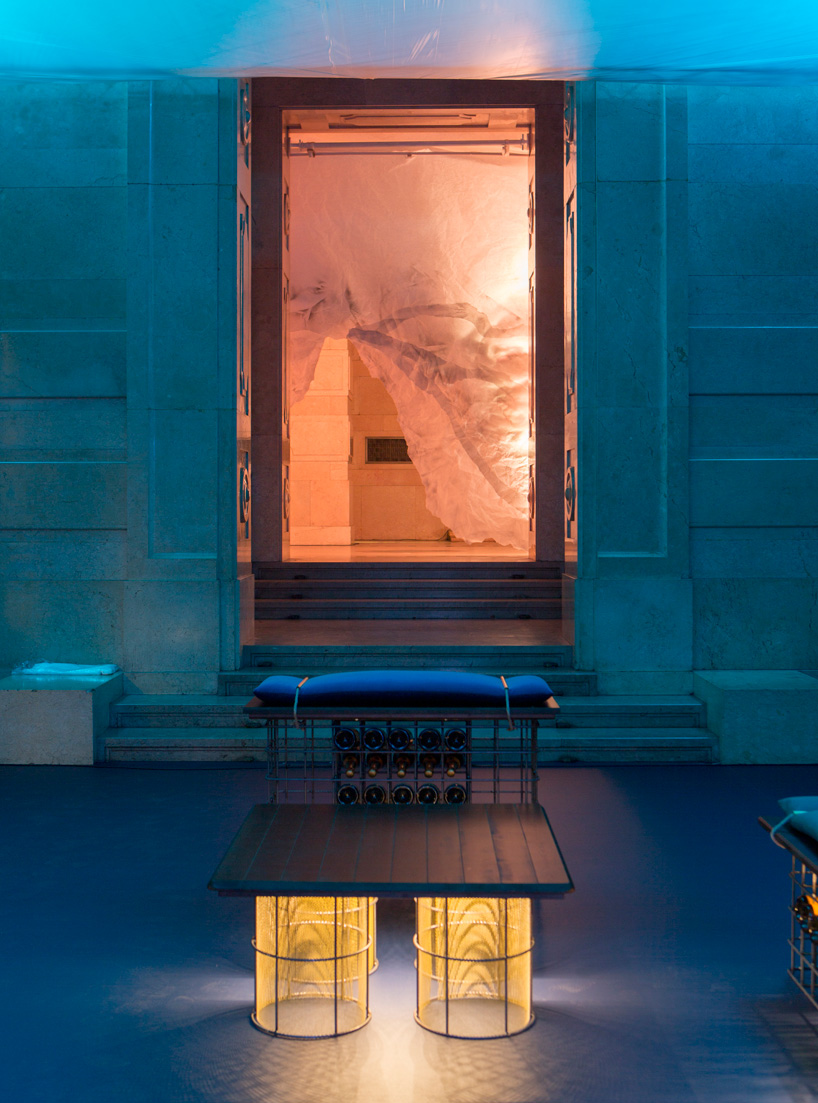 view from ‘the abyss’ into ‘the crayères’ 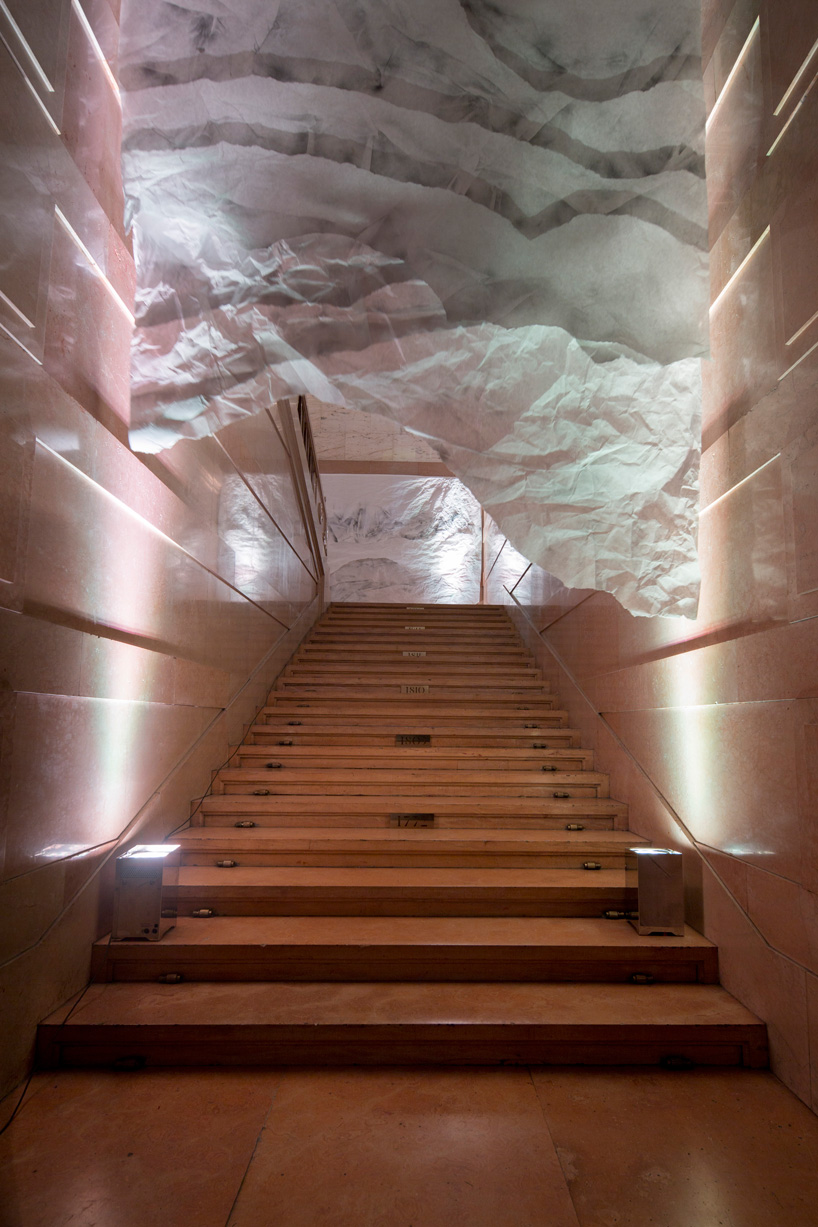 entering into ‘the crayères’ — the heart of the champagne house

next, visitors took a walk through ‘the crayères’ — the chalk caves which were created between the gallo-roman era and the 18th century which serve as the underground cellars for veuve clicquot. today, a UNESCO world heritage site, 24 km underneath the soil of champagne, they are the heart of the house, and the place in which the bottles repose, and where the ‘table de remuage’ is located. 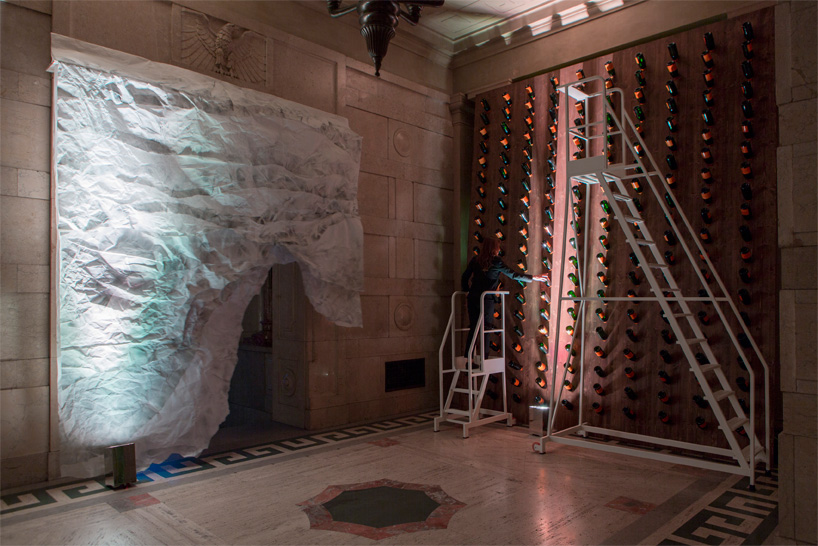 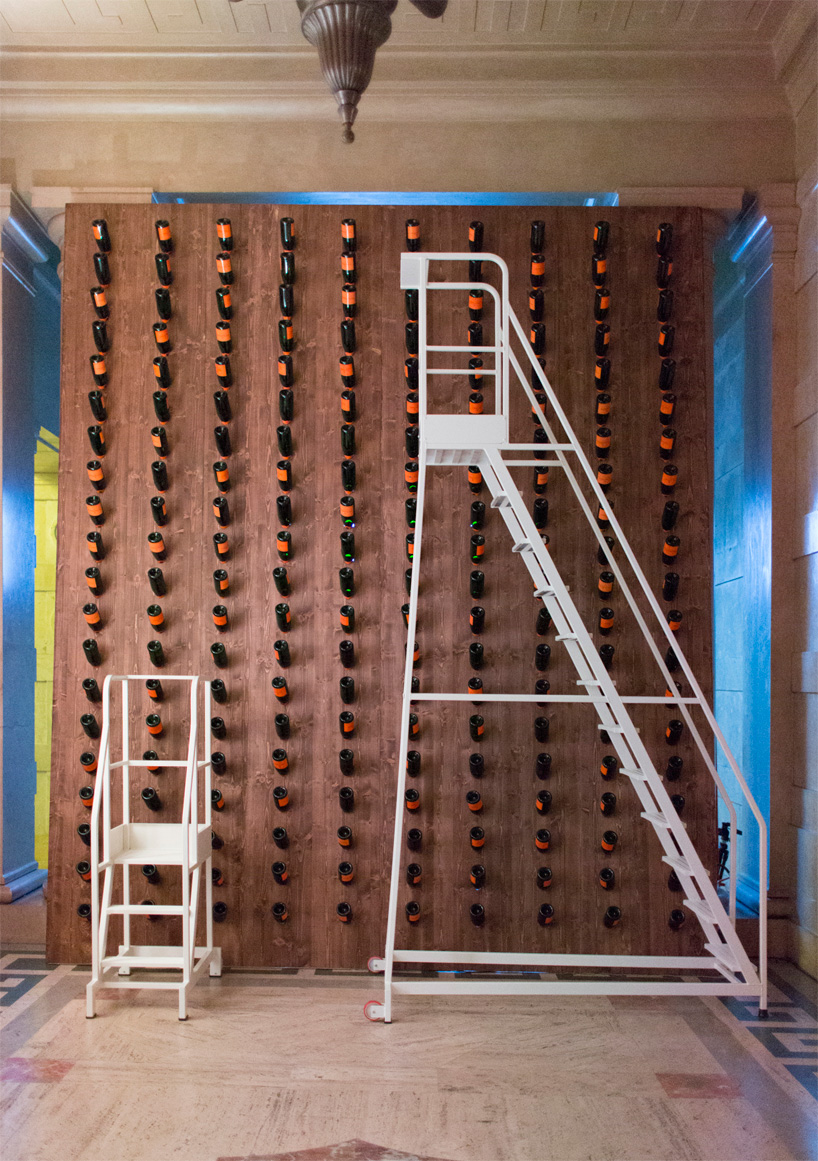 the veuve clicquot vault situated within the chalk caves 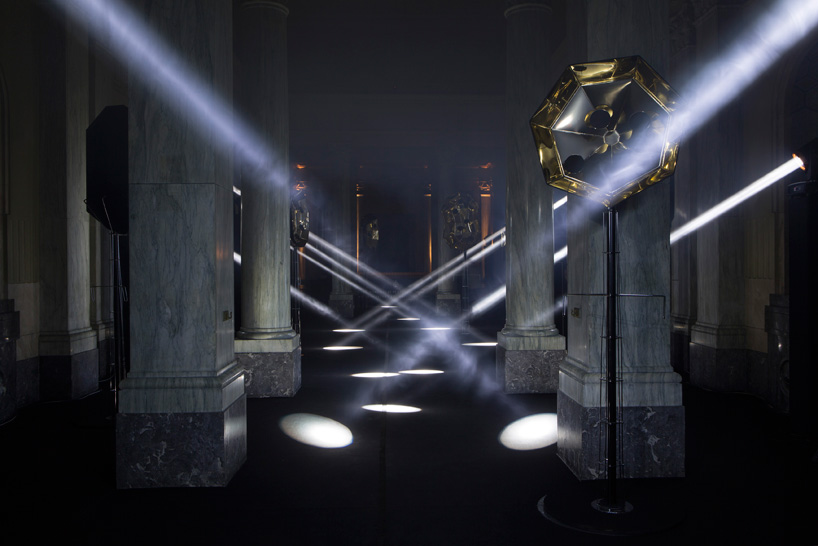 the majestic universe — the repesentation of a yet-to-be explored territory, a future to be discovered

finally, one reaches ‘the universe’, a yet-to-be explored territory. referencing the comet that crossed the sky of champagne in 1811, a harbinger of an excellent harvest. from it, madame clicquot produced an exceptional vintage, the ‘vin de la comète’, which carried her fame worldwide, bearing witness to her motto ‘only one quality, the finest’. 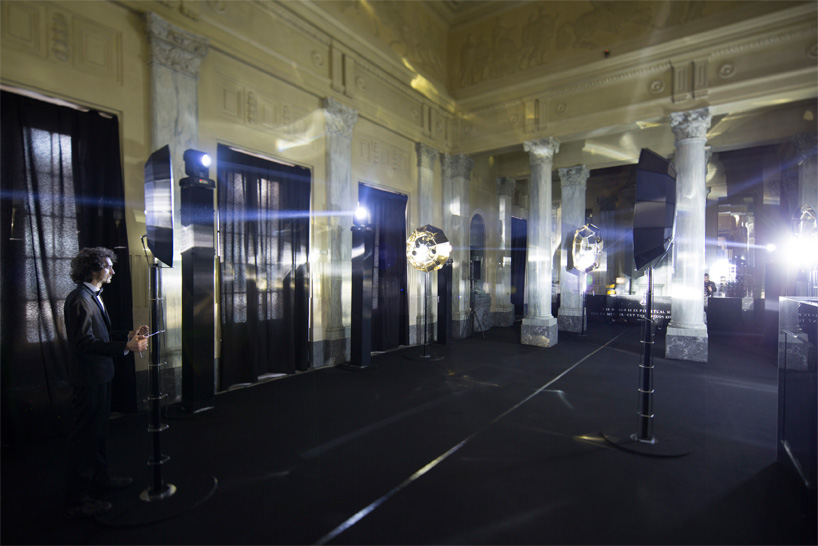 'the universe' reference the comet that crossed the sky of champagne in 1811, harbinger of an excellent harvest

the sea was crucial in the house's triumphant success in russia when madame clicquot managed to bring her wines to the court of the tsar in st. petersburg

'the crayères' are where veuve clicquot's bottles are placed to age, and where they are turned methodically

the 'BEYOND' journey included performances

today, 'the crayères' are a UNESCO world heritage site

entrance into the chalk caves

embarking on the veuve clicquot journet