79-year-old Kevin Harvey modified his used electric bike by anchoring and welding a wheelchair in front of the bike’s frame, so he and his wife Beverley can enjoy the outdoors together. The 89-year-old Beverley has dementia, and Kevin thought having her in front of him through his wheelchair bike design and during their rides would be easier rather than pushing her wheelchair up the hills and terrains of New Plymouth’s paths in New Zealand. The wheelchair bike also features a seatbelt for Beverley, so she can be strapped and secured during the ride, disk brakes, and curved front forks that refrain the wheelchair from being launched during a turn.

Kevin tells RNZ that the wheelchair bike has a full fold-up wheelchair in the front –  but it cannot fold up now – and the electric bike has the front stem altered to make it more back-facing rather than forward. He also says that the forks go down and connect to a bottom rail between the two parts that stick out on the wheelchair. The satisfaction Kevin feels for his invention has no match for the contentment he sees on his wife’s face as they bike up and down the coasts around their neighborhood, with Beverley soaking in the stillness and sun-covered landscapes. 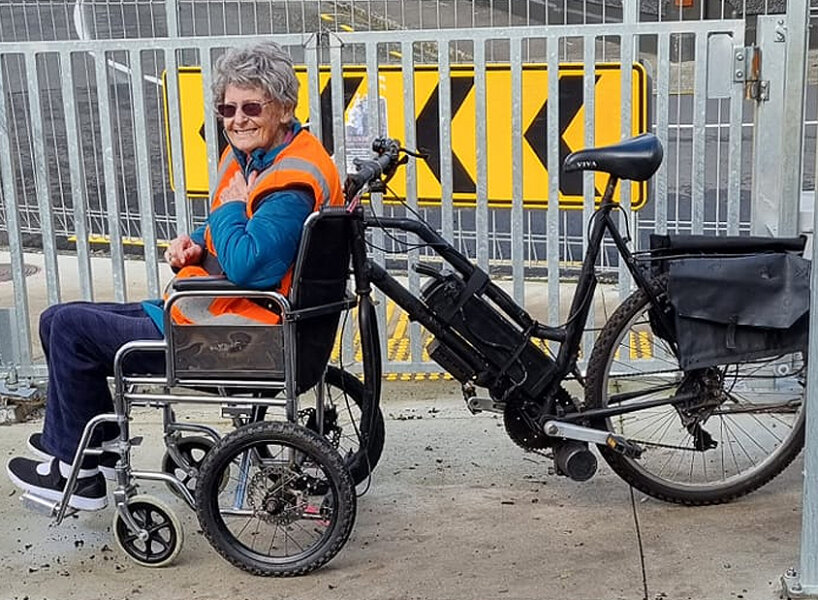 The couple has drawn attraction from passersby and loved ones who comment both on the creativity of the wheelchair bike design and the care and love Kevin obviously invests in Beverley. Kevin occasionally documents their journey when he uploads their photos on his Facebook page, and his captions steal the limelight along with the way he photographs just Beverley instead of them together. In one of the pictures, Kevin writes that his time with Beverley outdoors in his wheelchair bike is the only bike ride he can get these days, gifting each other moments of life to treasure.

Kevin also shares that the wheelchair bike has a limited speed of around 20km/h as its maximum not because the modified electric bike, which can run up to 45km/h before the refurbishment, cannot handle the speed, but because Beverely does not like going fast. It took Kevin months before they could use the wheelchair bike, and even then, he repairs and maintains it to make sure it will work on their next outdoor ride. At times, he would experience an issue with the bike, a nudge to the inventor that it is time to repair it. 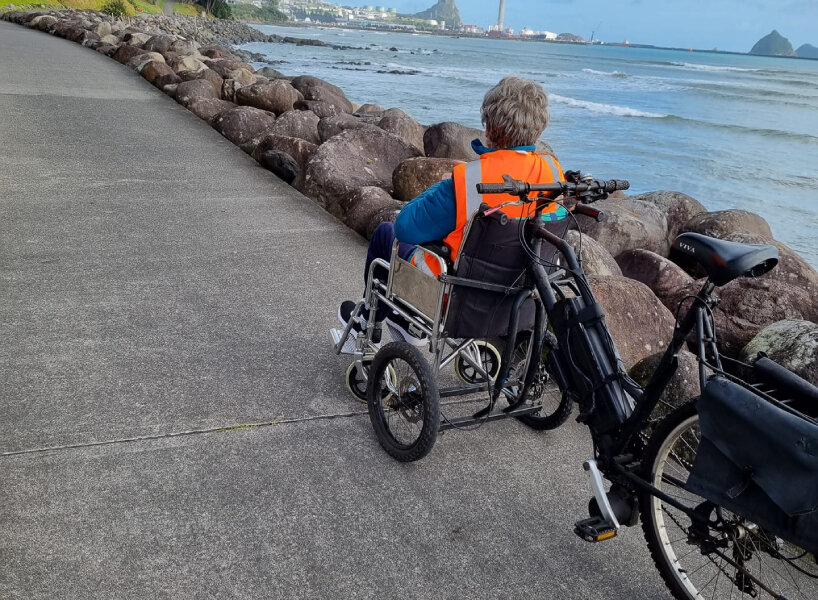 Once, Kevin posted that they were riding around the block with the newly installed handbrake to stop the wheelchair from rolling forward when he noticed that the wheelchair bike needed a smaller chain wheel to weather the hill ahead of them. He did it, incorporated it, and continued their bike rides. When Beverley had her first ride along the walkway of their neighborhood, Kevin grabbed his phone and took a picture. The stony landscape blended with the sky-blue horizon, a clear and great day for the duo to step out of their home and hop on the wheelchair bike. The photo (see the header image of this article) shows Beverley in her neon-orange vest, wearing a gleeful smile as she waves at a passerby. 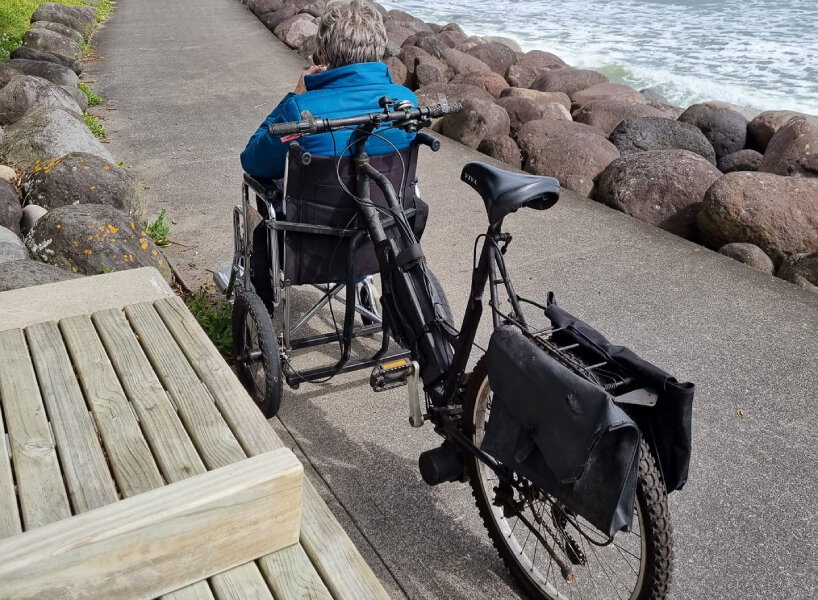 it took Kevin months before he could finish his creation 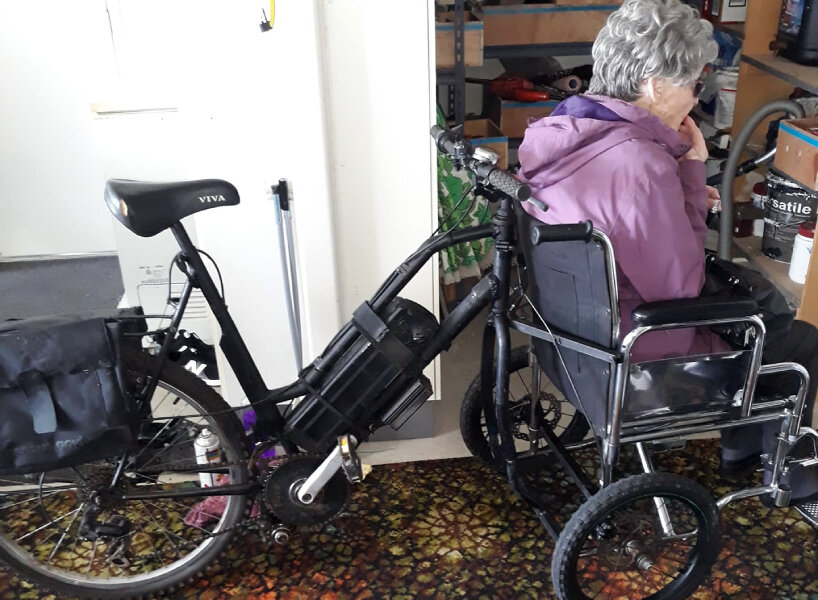 Kevin modified his old electric bike to create this invention 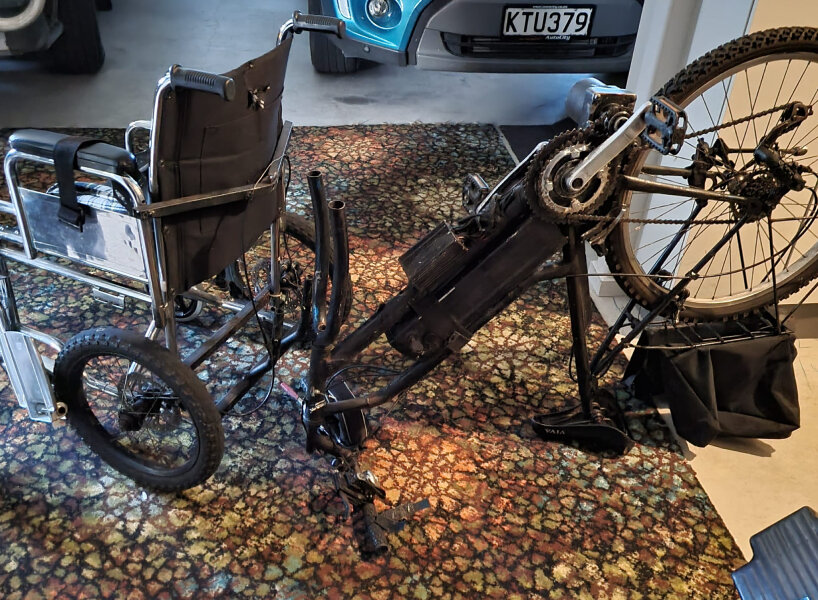 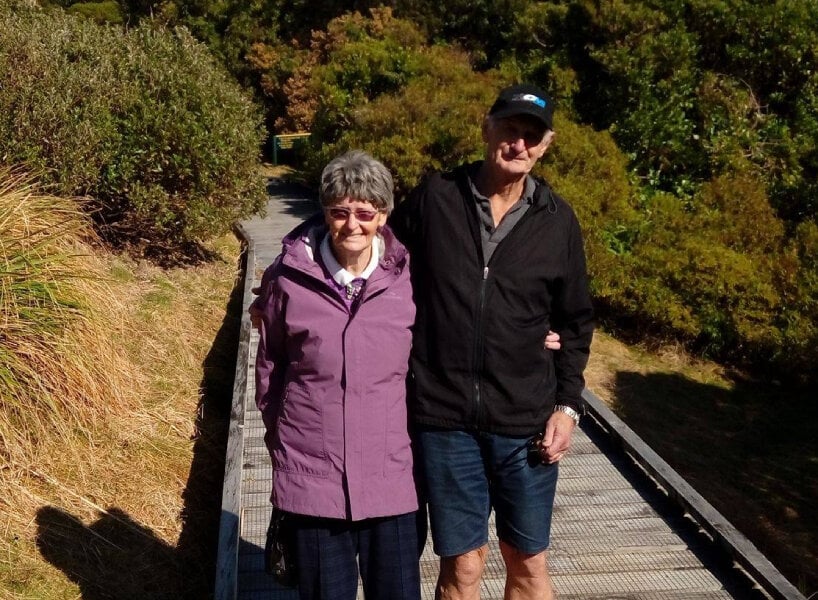 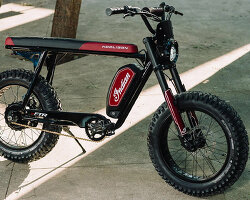