IMG SRC reveals the results of a two month hackathon

The team at Japanese creative agency Image Source (IMG SRC) has shared the results of a recent in-house hackathon where they developed three ideas using a transparent liquid crystal display. As part of an R&D project called µProto, the IMG SRC designers were divided into three teams and given two months to produce prototypes under the theme of ‘Challenge to express using a transparent display’. Here’s what they came up with!

Developed by director Suzuki, designer Koyama and Saito, and engineer Ishikawa, ‘Wipe Fake’ recreates the experience of touching and wiping a window that’s fogged up with condensation. Users can write messages or scribble little drawings with their fingers, which they can then wipe off and start all over again. The realistic prototype even recreates the water droplets that form and slowly fall down the window pane.

Part of this magical experience is also the scenery that emerges from behind the window. As such, the team says it will be possible to install a display with a beautiful view that’s slowly revealed as users draw, adding a surreal element to the experience. 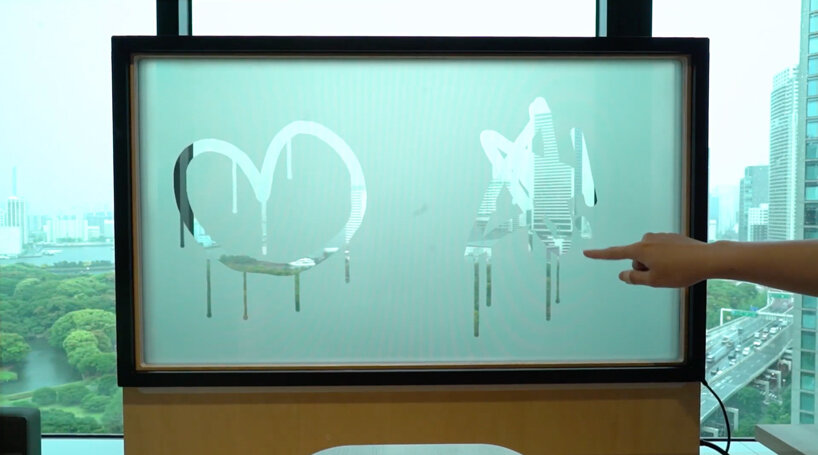 The second prototype from IMG SRC’s hackathon is a tool that detects living things and displays their status. Named ‘Biotalk’, the screen could be used in scenarios such as in an aquarium or a zoo to highlight animals and show information such as their species and how old they are. Biotalk was produced by Yamaguchi, sensing by Takano and Tanaka, UI design by Tsukada, direction by Furukawa, motion design by Kokubo, and application development by Torii.

The third team, made up of engineer Umezono, motion designer Saruhashi, directors Kanno and Oda, and public relations officer Nagaoka, created a display that penetrates the hearts of people facing each other. ‘SURU HEART’ promotes open communication between two people by expressing the heart of the person in front.

IMG SRC explains, ‘The basic structure is to hide or display the other party based on physical data such as posture/line of sight/voice (sound). Specifically, when making a loud voice, the conversation with the other party is interrupted or the posture changes. Even when it’s bad or your eyes are blurred, you can’t see the other person. The Image Source members who actually experienced it were full of smiles, saying, ‘It looks like you are seeing through!’ For the next time, we are currently updating such as adding animation display.’