university students comprising the purdue society of professional engineers (PSPE) rube goldberg team have set a new world record for the largest rube goldberg machine ever created: a 244-step device called ‘time machine’, which playfully traces the history of the planet from big bang to apocalypse before accomplishing the year’s goal: the watering of a flower.

regulations for the annual competition at purdue university require that the device be built within a six foot cube and accomplish a particular task (this year, the watering of a plant) within two minutes.

the 17-person PSPE team invested over 3500 man-hours into this year’s record-breaking machine, whose flawless run for the world record took one minute and 43 seconds. a timeline along the top of the device demarcates ‘the big bang’, ‘evolution’, ‘the ice age’, ‘the stone age’, ‘ancient egypt’, ‘medieval era’, ‘world war II’, ‘the cold war’, ‘technological revolution’, and ‘apocalypse’, and an arrow moves along the timeline to correspond with the action occurring below. plastic dinosaurs are hit with a ‘meteor’ and become extinct, dropping via a trapdoor into the base of the machine; stonehenge rises from the ground; the pyramids are built; and columbus in his ship falls off the edge of the world before we reach the modern era, whose steps feature the raising and lowering of turntable records and the printing of a sheet of paper.

for the finale, the four horsemen– here bob barker, dirty harry, darth vader, and woody the cowboy (from ‘toy story’)– trigger the apocalypse, in which sirens blare, rockets fall from the skies, and smoke fills the machine, before fabric panels drop to cover the entire device. a flower rises from the base, is successfully watered by a small pipe, and immediately begins ‘growing’, its pot raised via a telescoping mechanism.

footage from the world record-breaking run, followed by detail views of several steps 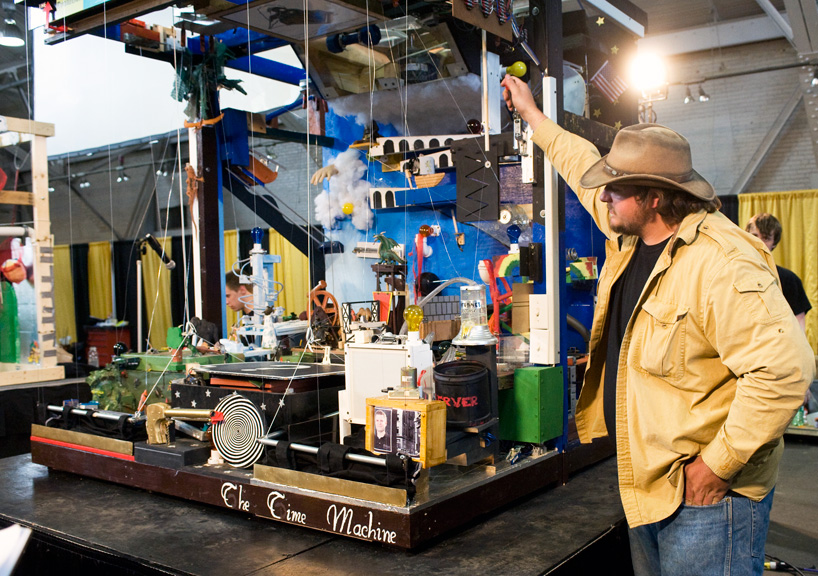 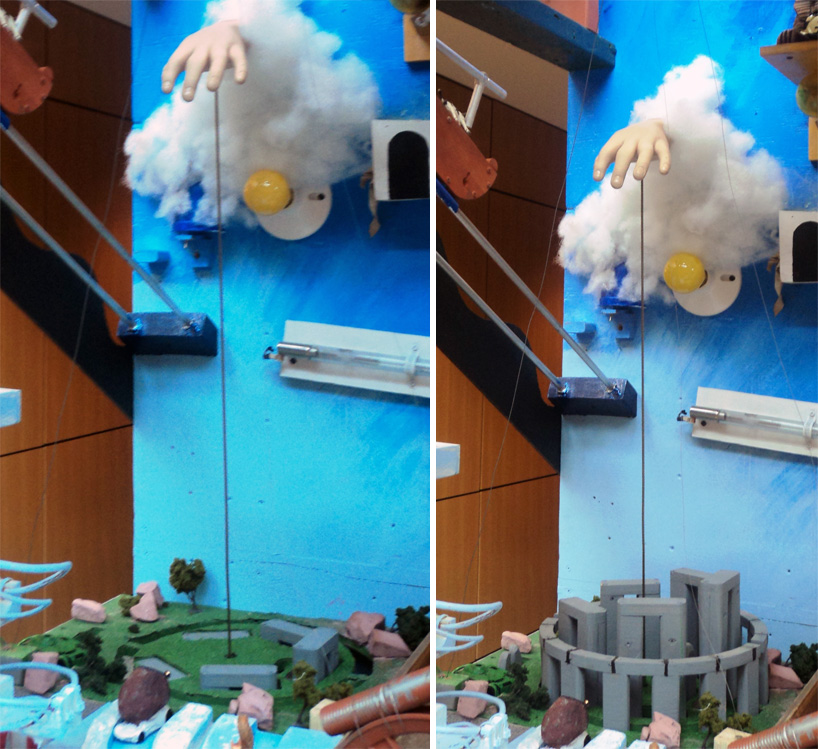 left to right: a hand in the cloud raises stonehenge during the ‘stone age’ phase of the device 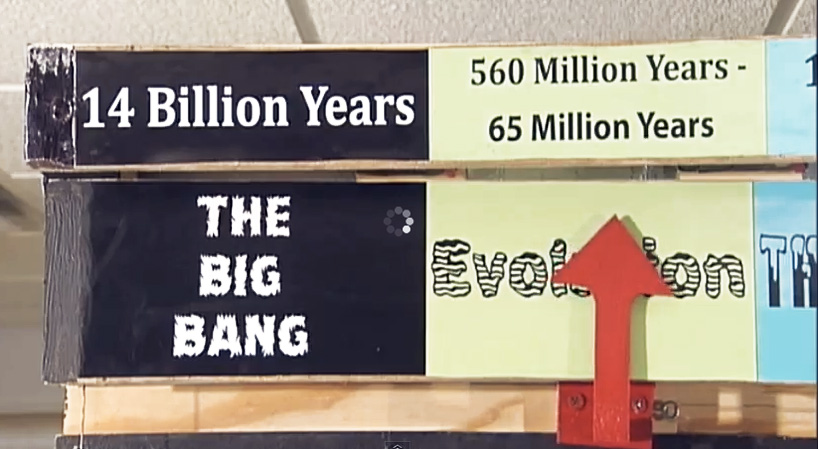 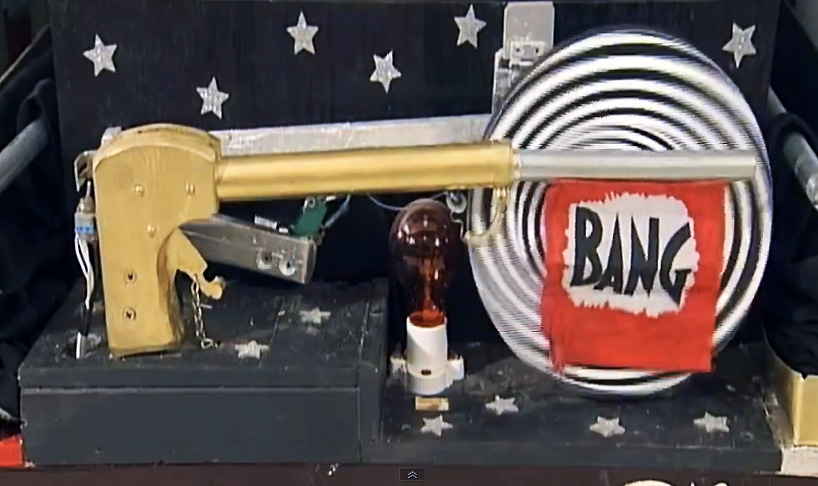 the ‘big bang’ step, initiated by a rolling ball, starts off the historical sequence of events

‘our team was founded in 1998 with the solitary intention of competing at the rube goldberg machine competition, held annually at purdue university. that first year, the machine was constructed using little more than cardboard and duct tape. thirteen years later, machines are designed with precision using virtually any material. with our team’s long history we have developed an extensive list of connections that have helped us solve virtually every problem we have encountered.’ 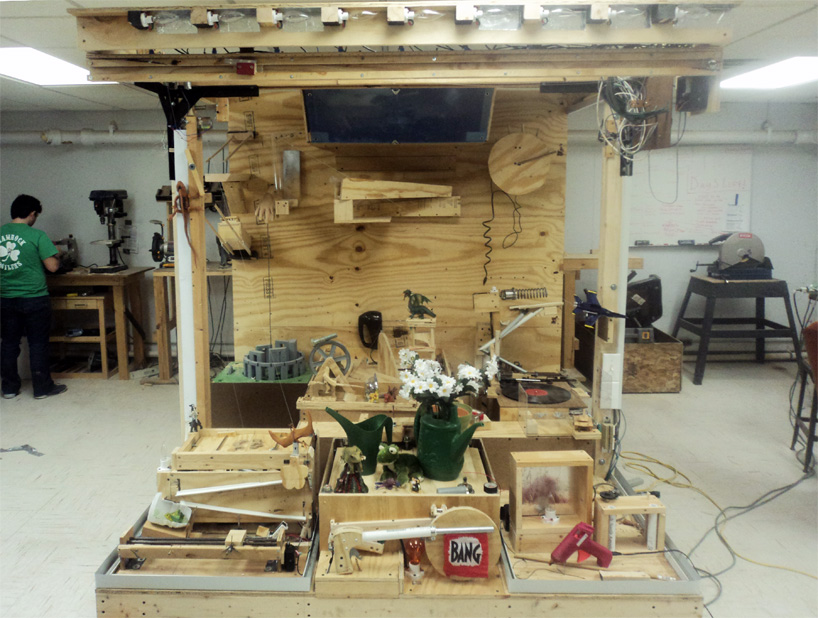 the machine early in its construction phases 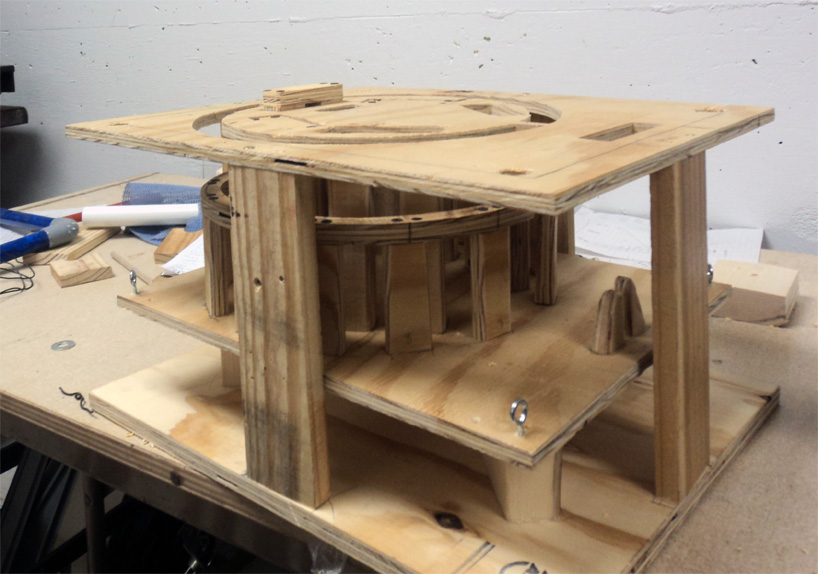 construction of the stonehenge structure and frame

unedited run of the device

time lapse video of the construction of the macine

Oct 20, 2021
power your home with joe doucet's wind turbine wall
the wind turbine hall by joe doucet is a kinetic wall made up of an array of rotary blades that spin individually, driving a mini generator that creates electricity.
design
+7.6K shares
connections: +140