is an object simplistic and lifeless, or does it eclipse another living entity? this doubt, which sometimes arises within us and destabilizes our basic feeling of safety, was called by freud ‘the uncanny’. it refers to when something usually recognized as familiar and comfortable radiates foreignism and even hostility. it is this very phenomenon that provided the starting point for yaara dekel’s ‘coppelius’, a project done during her studies at the bezalel academy of arts and design with the guidance of professor ido bruno.

the psychological concept assumes the shape of a wooden chair – a well known and likeable piece of furniture which gives off homeliness and a warm, welcoming ambience. ‘it so common and familiar, that it’s hard to imagine as having any sort of duality. the presence of the sitter is also found in his absence- the folds of the cloth, the fissure of the pillow, the scratched timber,’ explains dekel. thus, the challenge was to create two characters simultaneously. on one hand, the familiar typology, and on the other, ‘the stranger’, a hidden, unknown identity, impossible to observe at first sight. 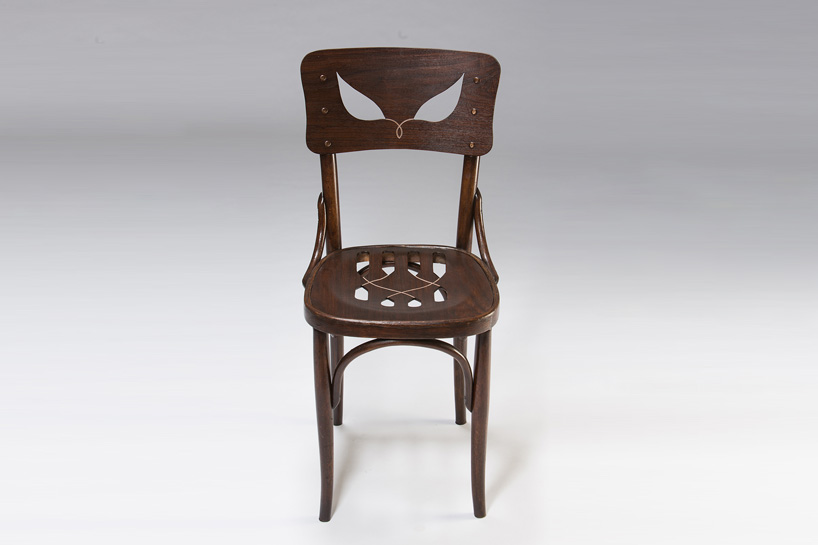 the front of the chair

the object presents itself as a variation of ‘thonet’ design, an aesthetic distortion coined by cabinet maker michael thonet from the industrial revolution. this technique was characterized by minimal material components, round lines, yet delicate, calm, and clean impression. however, at a certain hour of the day, when the room is lit, an inexplicable, monstrous projection appears, which symbolically ‘overshadows’ the feelings the original chair provokes.

to achieve this effect, the silhouette had to constantly be considered in forming the cutting lines of the seat and backrest. afterwards, engravings were added to camouflage the purpose of the lacerations and develop a stylistic, innocent-looking context for them. according to dekel, ‘the extreme contradictions that occur show the essence of the abstract and elusive term of ‘the uncanny.’ my interpretation of this term is represented visually, which allows me to examine closely this very complex feeling.’

Oct 04, 2022
zena holloway launches a collection of bio-designs grown entirely from grass root
the project explores the promising possibility of root-grown textiles and imagines a future where fashion is sustainable and compostable.
design
668 shares
readers
connections: 35