for milan design week 2017, samsung has partnered with zaha hadid architects (ZHA) to create ‘unconfined’, an installation that tells the story behind the galaxy S8 smartphone. the team, who worked alongside digital art and design collective universal everything, created an immersive environment inspired by the forms, colors, and materials of the recently unveiled device. 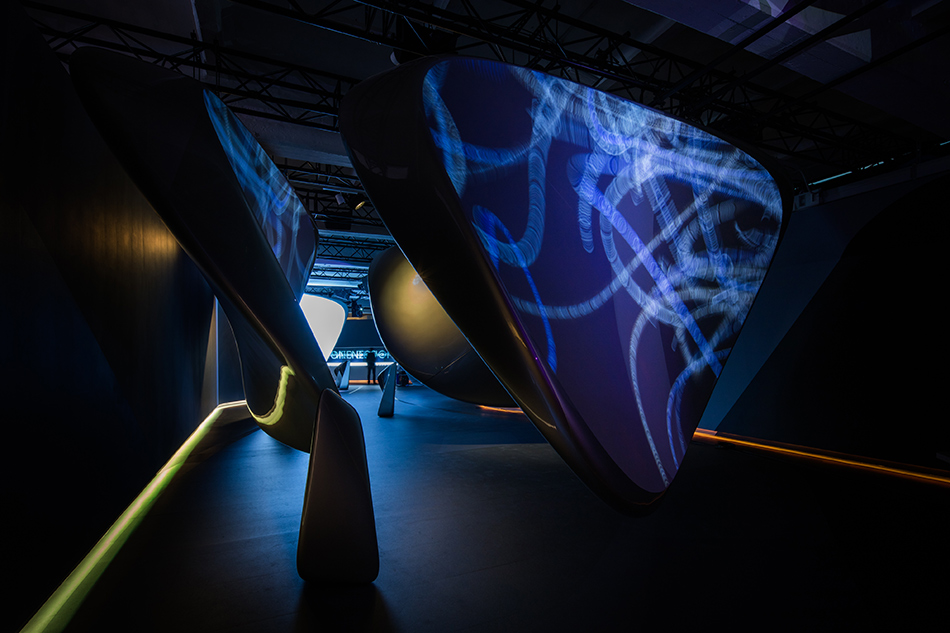 upon entering the installation, visitors are able to use samsung’s S8 to create their own avatar before seeing it appear on a series of curved screens that appear to float within the space. designed by zaha hadid architects, these ‘warped petals’ surround guests in a swarm of digital creativity. ‘we’ve done exhibition design for our own shows and for other people’s shows, so we’ve worked with unusual forms of screens before,’ patrik schumacher of ZHA told designboom at the installation’s opening. ‘the integration of animate graphic space with real space, and that overlay, we’ve explored before — but this is the biggest scale for that.’ 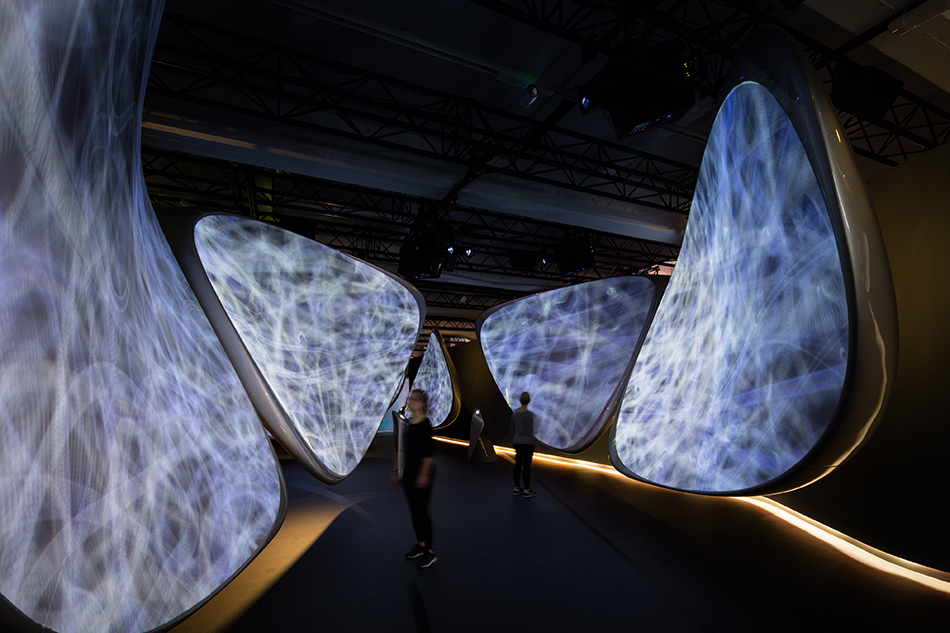 suspended from the ceiling, the seven screens measure around 5 meters in length and 3.5 meters in height, creating an engaging sculptural canvas upon which to project a range of digital media developed by universal everything. ‘they (samsung) have emphasized certain values like curvilinearity and the seamless integration of physical and virtual graphic space, and I think we are expressing that,’ schumacher explained. ‘it’s in the actual form that we display subtle manipulations and organic forms.’ 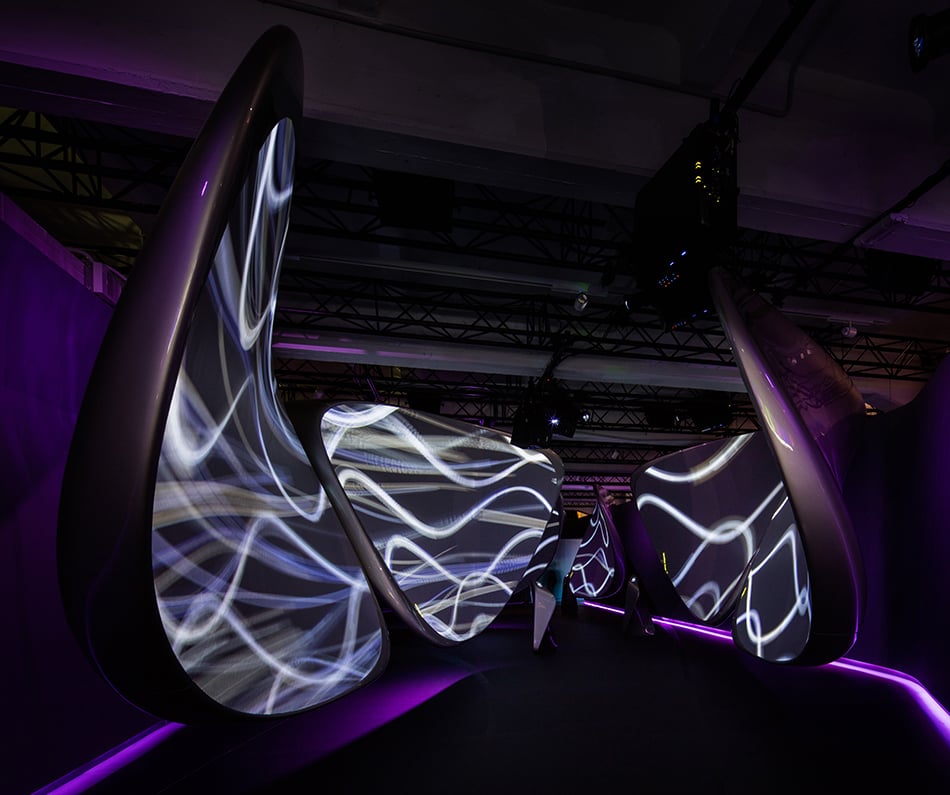 ‘we designed the whole experience in terms of its physical presence,’ continued schumacher, principal at zaha hadid architects. ‘the more ambitious piece is the immersive installation, which is seven screens. these kind of warped petals are displayed in an interesting way, so you capture between different screens. then there’s an immersive continuous image running across all of them. there is also an interactive element where you create your avatar to populate the screens.’ 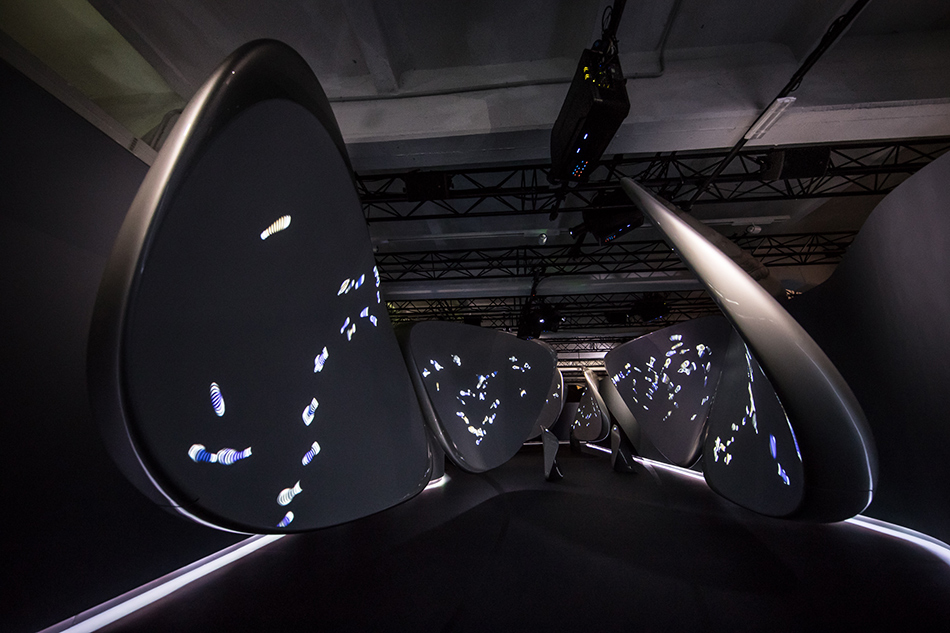 visitors use samsung’s S8 to create their own avatar

conceived as an architectural landscape, the exhibition then guides visitors towards the second zone — a more brightly lit area where the S8’s features can be explored in more detail. ‘the design study was always the form, and the seamlessness of the form,’ added johannes schafelner, project director and associate at ZHA. ‘there’s one dark immersive space, and then it flips to the other side — 800 square meters in total. originally it was half this size, but samsung wanted to increase it and show more of their products.’ 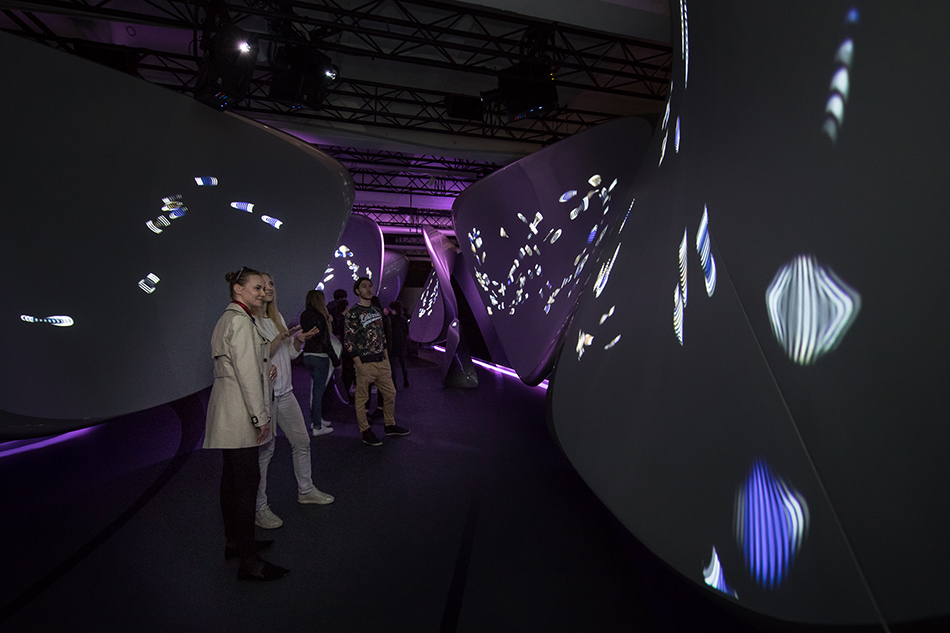 the avatars then appear on the seven screens

‘milan design week represents a unique opportunity to demonstrate the refinement of the galaxy S8 and S8+ among the best minds of the design industry,’ explains younghee lee, executive vice president of global marketing, mobile communications business at samsung electronics. ‘the galaxy S8 and S8+ showcase our commitment to meaningful innovation; with the bezel-less surround and infinity display we have designed a device that connects with the user like never before, with function not limited by form.’

‘unconfined’ remains open at BASE milano until sunday april 9, 2017. 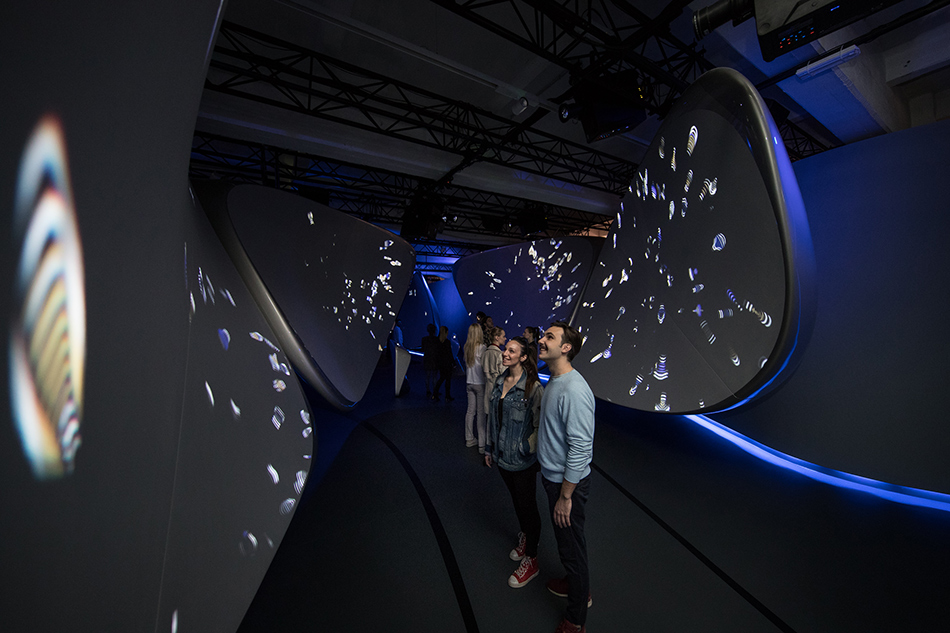 the ‘petals’ measure around 5 meters in length and 3.5 meters in height 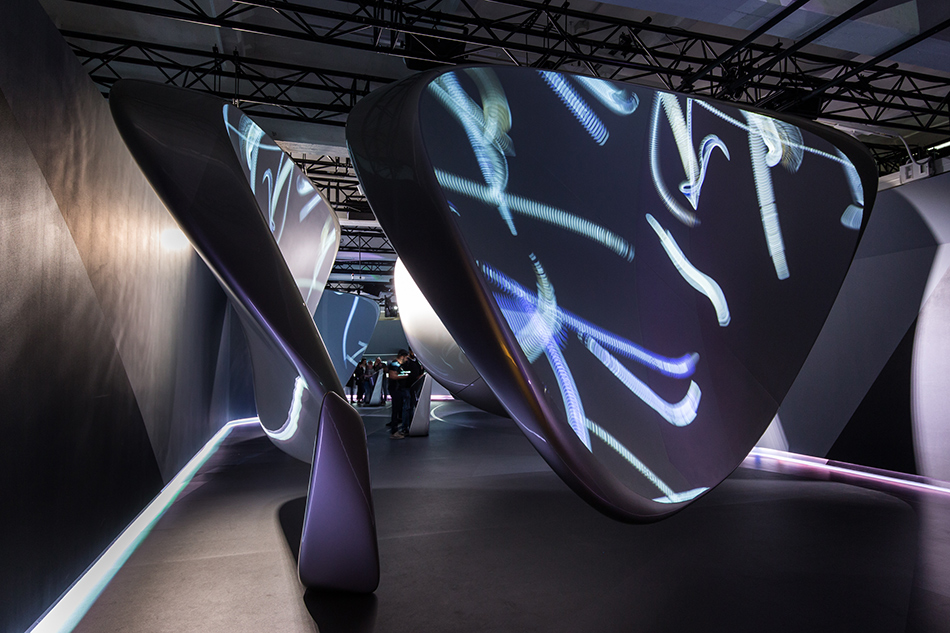 the installation was developed alongside digital art and design collective, universal everything 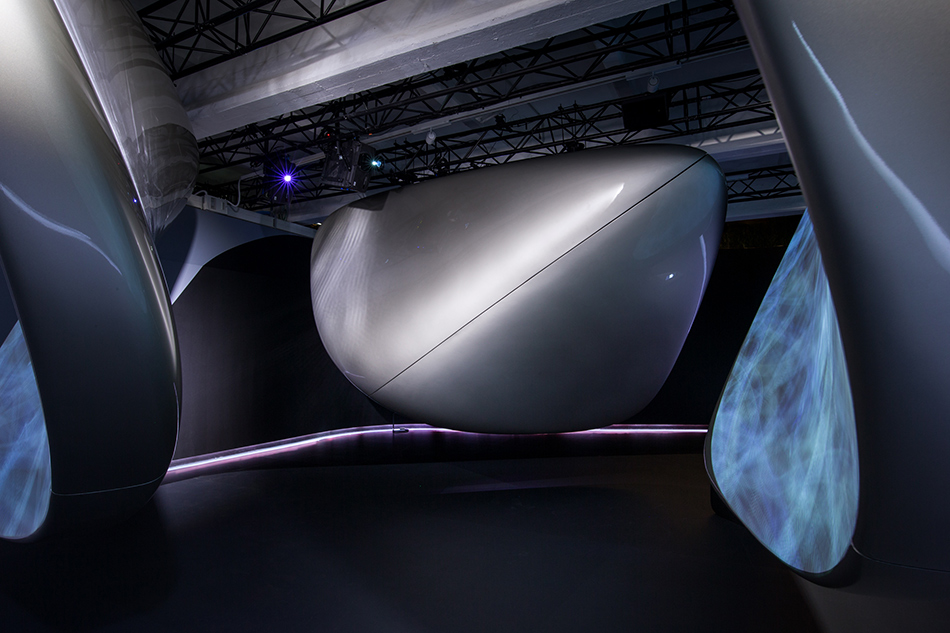 the work has been conceived as an architectural landscape 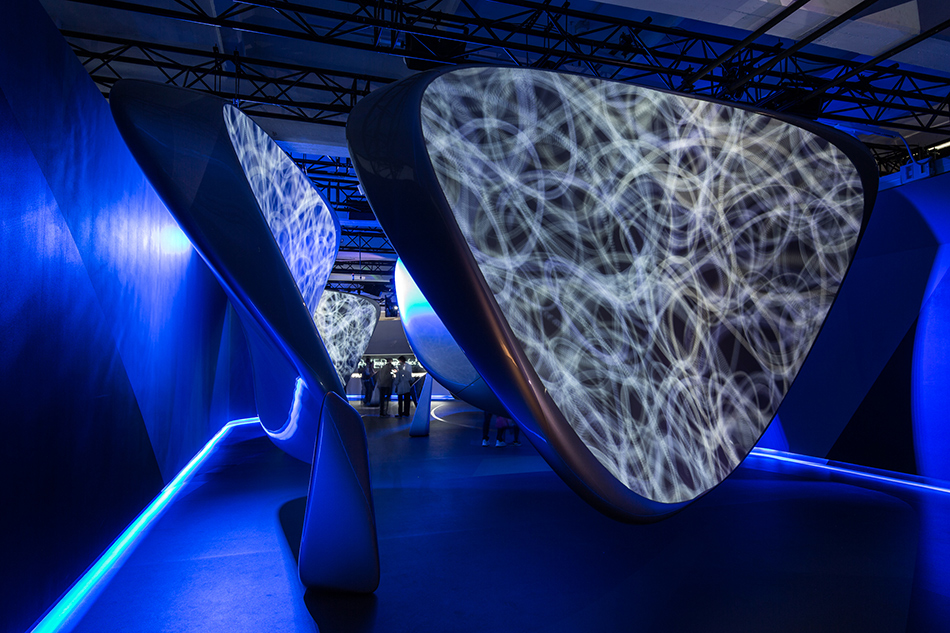 the exhibition reflects the forms, colors, and materials of the recently unveiled S8 phone 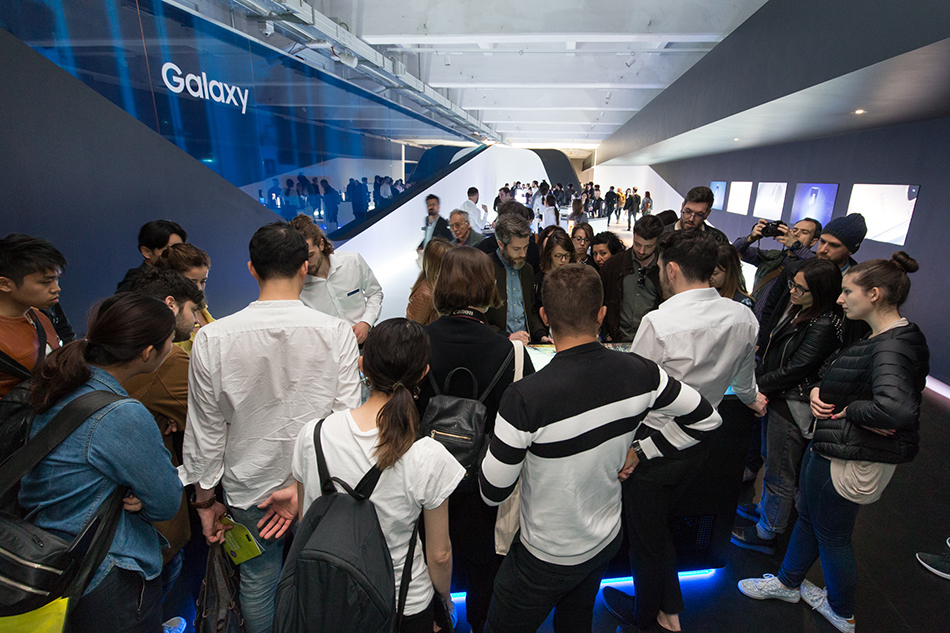 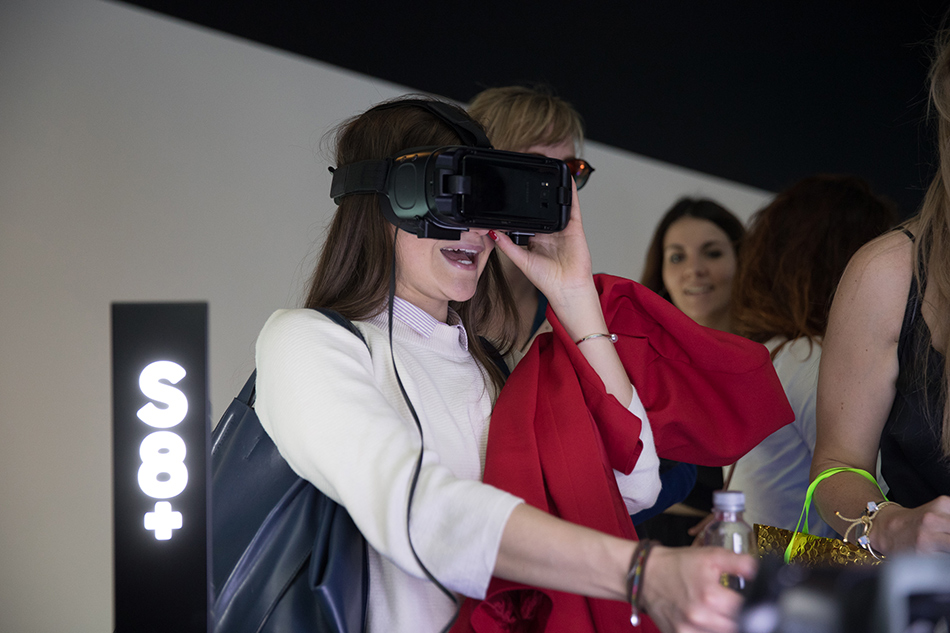 visitors can explore the S8’s features in more detail