what is the best moment of the day?it’s different from day to day. maybe it is rightbefore I go to bed. I enjoy that quiet moment alone.

what kind of music do you listen to at the moment?everything really. in the studio my assistants listen to theradio for background noise. mainly korean pop music.but, when I am alone I listen to a lot of classicrock from the 60’s and 70’s.

do you listen to the radio?yes, just in the studio.  it’s not what I want to hear, but what my assistants wantto hear.

what books do you have on your bedside table?I have a lot of books that I read over and over again.one of the subjects I read about is fish – I was goingto be a marine biologist before I decided to be an artist.when I was younger, it was the passion of my life.I still have books on fish on my bedside table.recently I bought a book called ‘the deep’. it’s about fishin the deep sea. I haven’t finished it yet. right now I havethree books on fish on my bedside table in new york.they are quite relaxing, and help me fall asleep too. 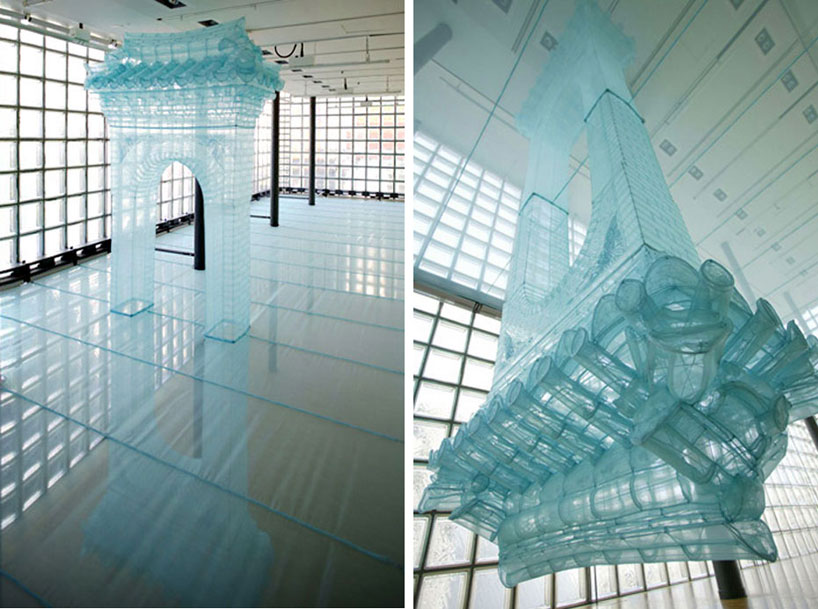 left: ‘reflection’, 2005large scale installation at the hermes gallery in tokyo.it consists of two gates made from nylon fabric which are separated by a translucent fabric‘floor’, appearing to be a reflection. see more imagesimage courtesy gallery hermes, tokyo

right: the ‘gate’ is based on the former entrance to his family’s home in seoul,it was intended to encourage contemplation on how we remember images and space.image courtesy gallery hermes, tokyo

do you read art – and design /architecturemagazines?yeah, sure. there are a couple of art magazines I regularlyread like ‘art forum’, ‘cabinet’ and ‘parkett’ for example,and I do read architecture magazines.‘detail’, ‘architectural record’ and ‘dwell’. what else?sometimes ‘domus’, ‘blueprint’, ‘metropolis’ …I like ‘dwell’ because they deal with and feature pre-fabbuildings and low-budget housing. I think their angle is alittle bit different than others. it’s not totally architecture.it’s more about accessible housing.

where do you get your news from?these days I pretty much get it from the internet,I hardly watch TV.there’s ‘channel 10, new york one’, it’s a local new yorkcity news channel, and I actually watch that when I’m in NYC.

I assume you notice how women dress.do you have any preferences?umm, that’s a tough question,I laughed when I read this one in your other interviews.I think we should skip it and come back to it later…(in a second moment)I think I prefer the traditional, the refined.I’m not interested in the big fashion houses.even though I have exhibited at ‘hermes’, and they do havevery nice things, I don’t really feel that I am a partof that. so my preference would be something veryelegant but not brand name.in general, I prefer a minimal look. 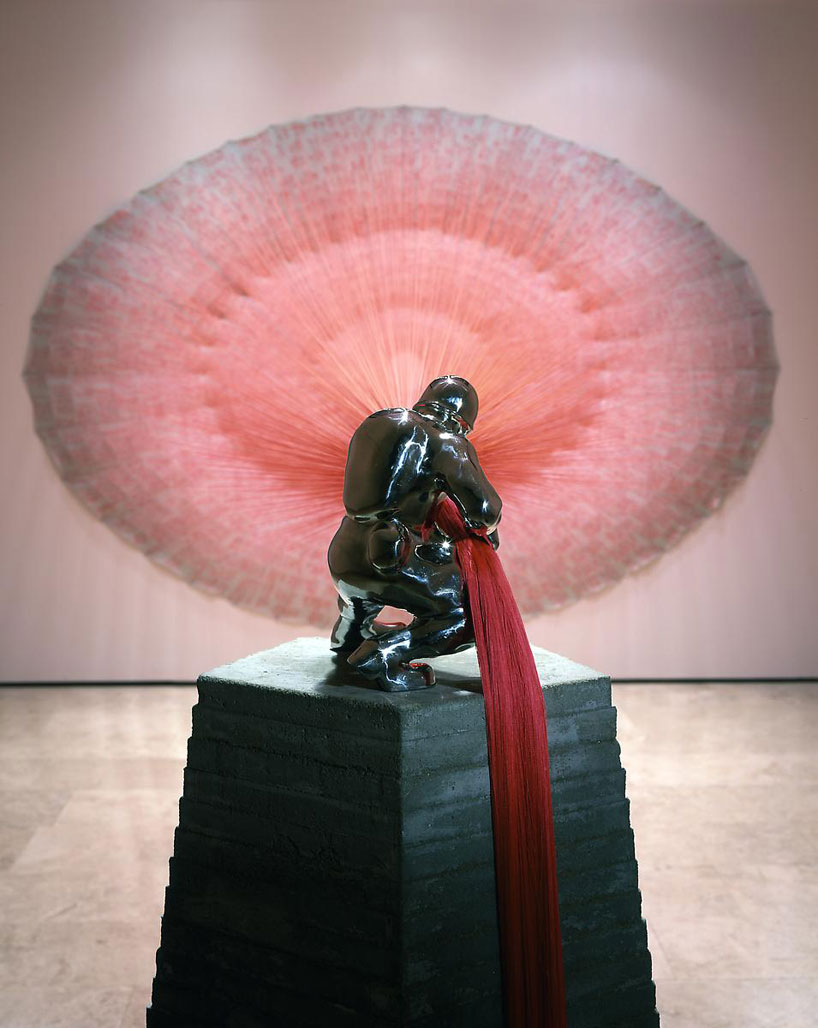 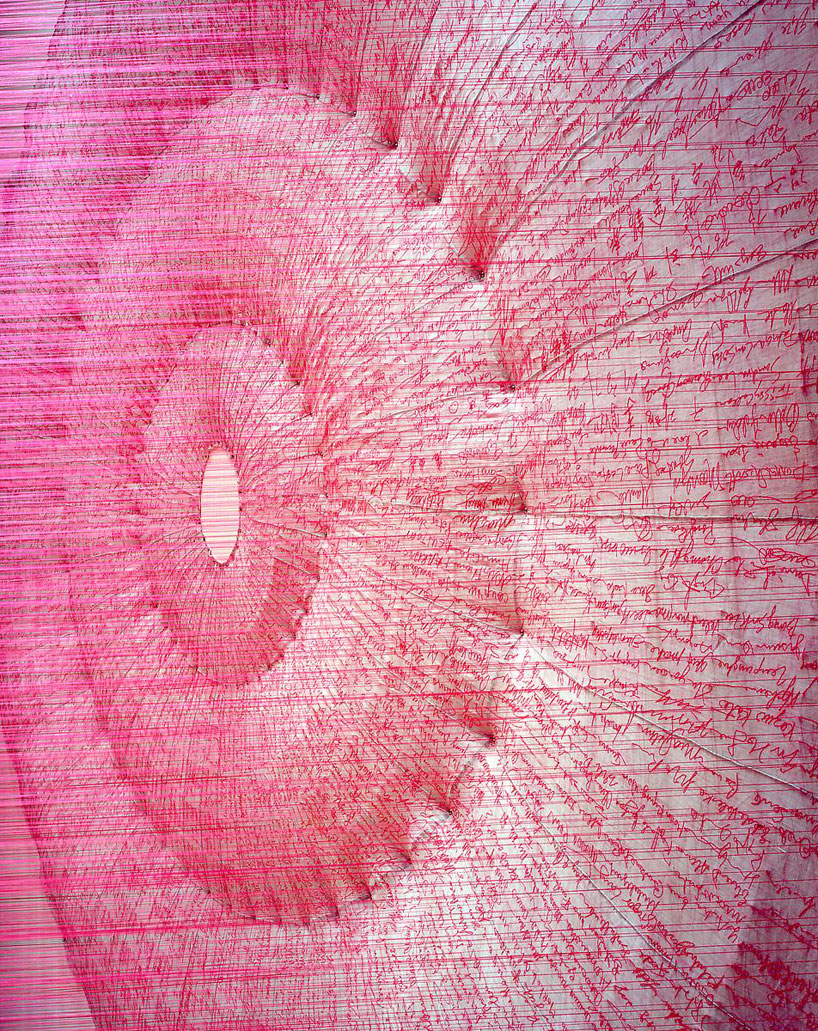 what kind of clothes do you avoid wearing?that’s another tough question…I don’t think I wear nor have any leather items.I don’t really have an occasion to wear ties, I’m an artist.I go to funerals sometimes here in korea, so I have ablack suit and tie. Apart from that there are veryfew occasions where I dress up.

when you were a child, did you want to becomean artist?no, like I said, up until the 11th grade, I wanted to study fish,so becoming an artist was a last minute change, right beforeI went to college in korea. although my father (se-ok suh)is an artist and has an influence on me, I wouldn’t say henecessarily introduced me to the art world itself, but morehis aesthetics. his taste definitely somehow influenced myaesthetics. he never directly explained his artwork to me,but to his students. they always gathered around my father,as if they were in a huddle, admiring an antique piece,drinking and having discussions. he had a group of followersand I always joined them and just listened in on theirconversations. it was a very artistic environment, so Iwas definitely exposed to that. they would talk about painting,sculpture, architecture, and gardening. my father is verykeen on plants and gardening. 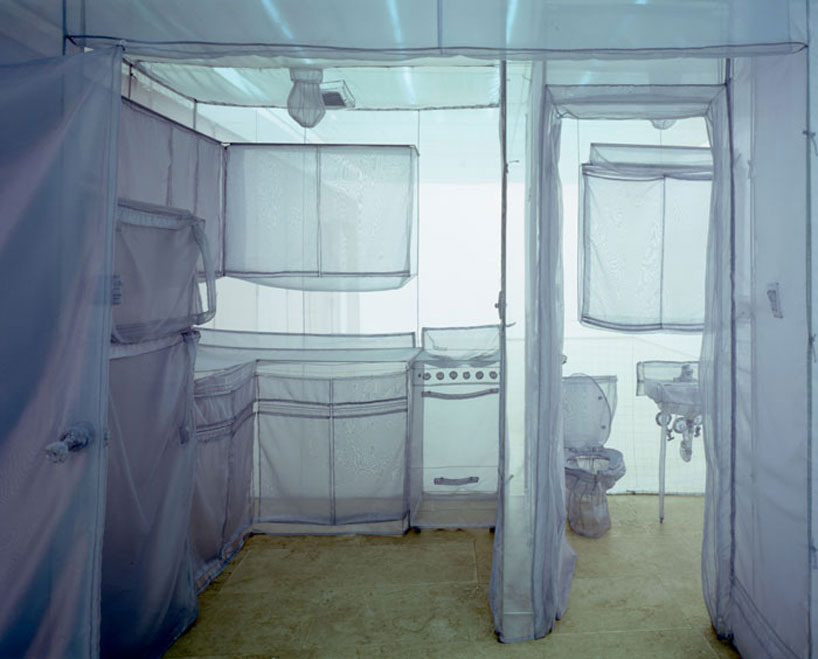 how much did the korean society influenced you?a unique part of my father and my growing up was actuallyhis practice, although he was a professional painter,he was pretty much the last sort of scholarly painter in korea.he is a renaissance man. it is a tradition from the past –in the far east – and a scholar must master poetry, literature,calligraphy, painting and things like that as part of their virtue.you have to study everything. he lives that tradition.my grandfather was also a scholar. even though my fatherhad a modern education he still writes his poems in classicalchinese. those were the main influences…my mother also loves art. she’s a housewife, but is alsovery involved in preserving korean heritage and culture.she has a tremendous amount of knowledge abouttraditional art, costumes and architecture.so I’m not just influenced by my father.

where do you work on your designs and projects?I have two studios, one in new york and one near seoul.that is where I make my work, where I give form to mywork. the conceptualization part happens in-betweenplaces, when in transit, like in an airport,on the airplane or on the train – those in-between places.I think I have more inspiration when I don’t actually makesomething. in the beginning, I didn’t like traveling too much.but now it’s part of my job. I have to travel a lot and I sortof developed a habit to use that time for more creativethings. for example, instead of reading, I actually do a lot ofsketching during a flight. I carry a very small sketchbook.that has been the same format since my college days.I travel light too, so I always carry those little things andmake sketches. 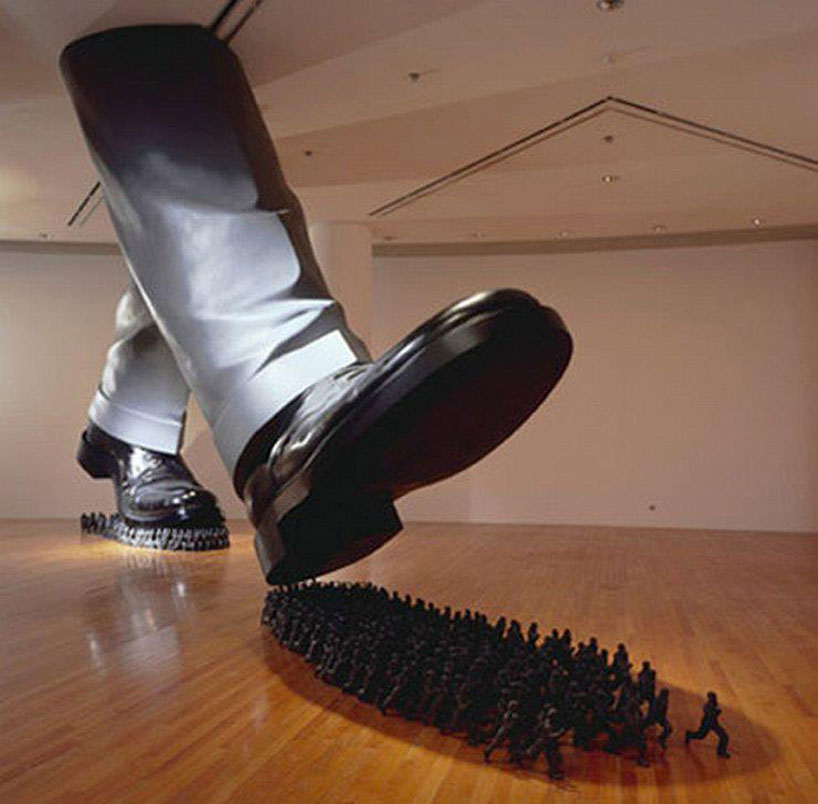 in your work I can see a lot of social criticism,did you have periods in your life characterizedby rebellion?maybe, my work has social criticism, once in a while…but it doesn’t come from any sort of rebellion.I’m a slow starter. I can’t be reactionary as fast as others.  It takes some time for me to digest things and show mythoughts and opinions in my work.  by the time I do that, it is not criticism any more…

new york influenced you a lot?my work started from that slippage or discrepancy,the crack.  the difference between my mother tongueand foreign tongue. I think new york city allows me torelate to myself in a different way.whenever I come back, I come to korea quite often,it is always different. it’s not the same place anymore,once you leave your home. it’s quite an unsettlingexperience, because you feel like you don’t belonganywhere. I guess we don’t really need to belong to aplace in today’s society. that is what I like about new york.it’s not perfect, but you can have pretty much anythingthere. it’s a tough city, but I think it’s the perfect cityfor strangers, because pretty much nobody isfrom there.

left: ‘who am we?’ (detail) 1996/2001photograph © designboomwallpaper shown in the italian pavilion of venice biennial, 2001

right: ‘who am we?’ (detail)photograph © designboomthe portraits are of about 40 000 teenagers and were taken from photographs in theartist’s high-school yearbooks. at a distance, the faces cannot be distinguished.on closer viewing dots become recognisable as photographs.

do you discuss your work with other artists?not in the sense of the turn of the century europeantradition, proust’s gatherings and all of the paris salons.I do have a few people, a few artists in new york, or inseoul, that i discuss my work with.

could you compare the current art scene innew york and korea – any preferences?there are a lot of good contemporary artists in korea.but new york, in terms of art world, is a much bigger place.I personally have a lesser personal attachment to thingsin new york, and the friends that I made in new york,I made them relatively later in my life.in korea, I have childhood friends and memories.there are more complicated relationships in korea.some times it’s suffocating because of this tight web ofrelationships here.  for art making, I prefer new yorkbecause I feel freer and more independent.

right: ‘floor’ (detail)photograph © designbooma small section of this large ‘floor’ installation has since been cut by the artist and donatedto his father who uses it as a coffee table.

describe your style, like a good friend of yourswould describe it.this is another tough one…if my friends would say anything about my work, it’s that‘he is good with space, he deals with space very well.’(and I would agree with this too).

what project has given you the most satisfaction?those you’ve worked on for a long time?I think it’s almost the opposite. it doesn’t really comefrom the amount of time that I spend on a particular project.the most satisfactory ones came really fast, in theconceptualization stage. there is one piece, it’s called‘who am we?’ it’s a wallpaper piece. I really like thiskind of work because it looks very simple and subtle.a lot of people would miss it so easily. it’s still one of myfavorites. I’m surprised every time I look at it.how was I able to come up with that idea?

who would you like to create something for?it is always for me at the beginning.but then my art becomes for others.oddly enough, people from different cultures…for someone who is not familiar with my ideas.so hopefully my work can blur boundaries. 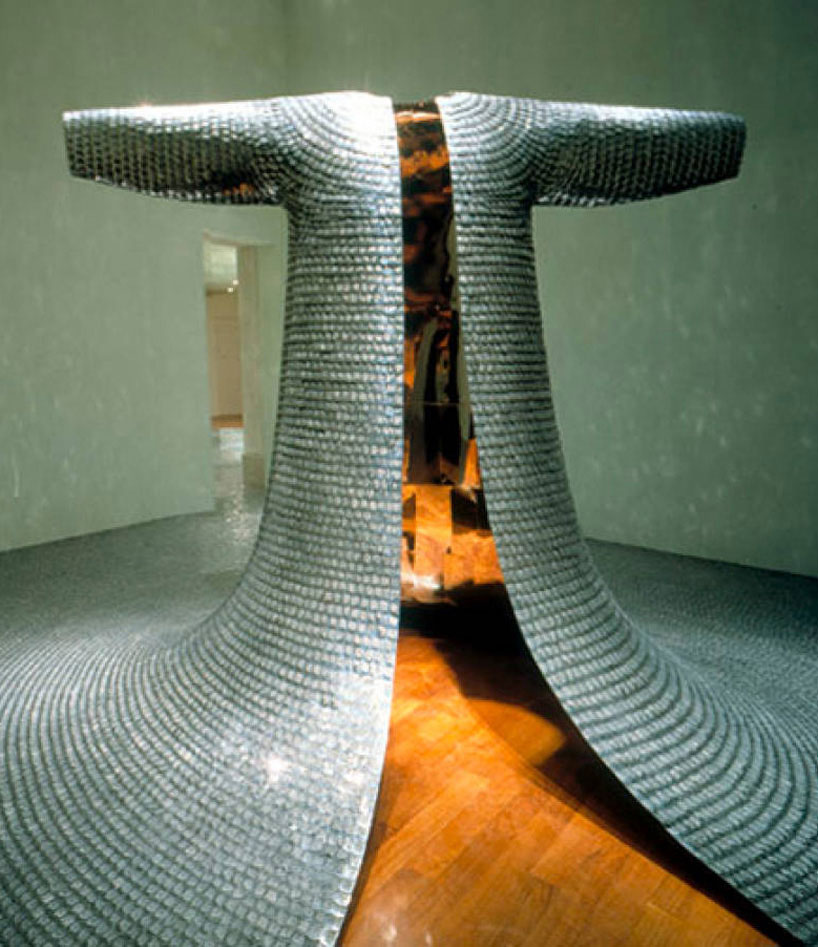 ‘some/one’, venice art biennial, 2001in the korean pavilion the floor is blanketed with a thousands of military nickel dog tags.evocative of the way an individual soldier is part of a larger troop or military body,these tags swell to form a hollow, ghost-like suit of a traditional korean dress.photograph © designboom

is there any artists from the past, you appreciate a lot?felix gonzalez torres, he is one of my favorite artists.there is also one chinese painter from 19th century,ch’ing (quing) dynasty. his name is ba-tai-sar-ren.

and those still working / contemporary?there are so many! ann hamilton, robert gober,matthew barney, kara walker, bruce nauman…you name it. 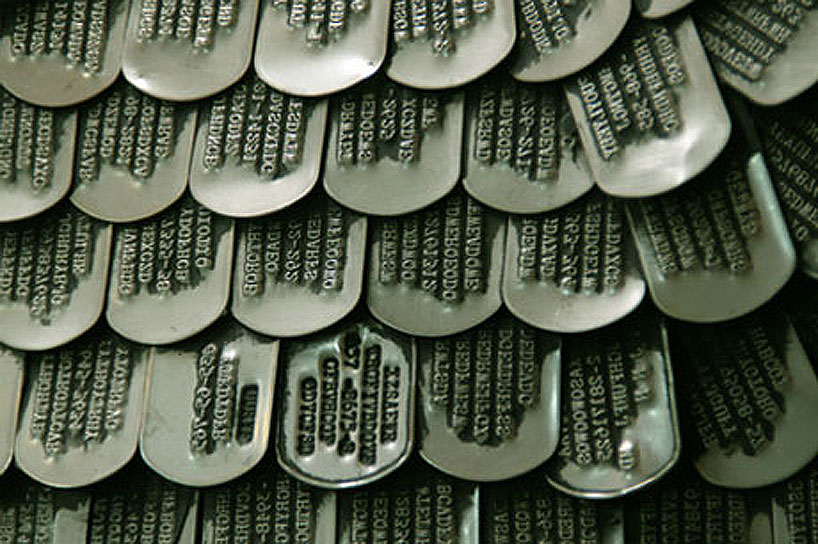 what advice would you give to the young?keep your sanity! ha ha ha…I think it is a key for the survival of young artists.because being an artist is very difficult like all other things.having fun while making art is important.

what are you afraid of regarding the future?global warming and its consequences.but I am not that pessimistic.It could be a beginning of new cycle on earth…