I think about four ‘o’ clock in the afternoon asI tend to slow down a little and contemplate what has happened, and what’s still got to be done that day. it’s a critical moment in the studio.

I really like justin timberlakes new album (futuresex/lovesounds),the production is excellent and whilst I never liked him before, with this album he has grown into his own creative entity.then there’s bowie, I’ve never stopped listening to him.my son tends to download a lot of music,which ironically is music that I was listening to 20 years ago. 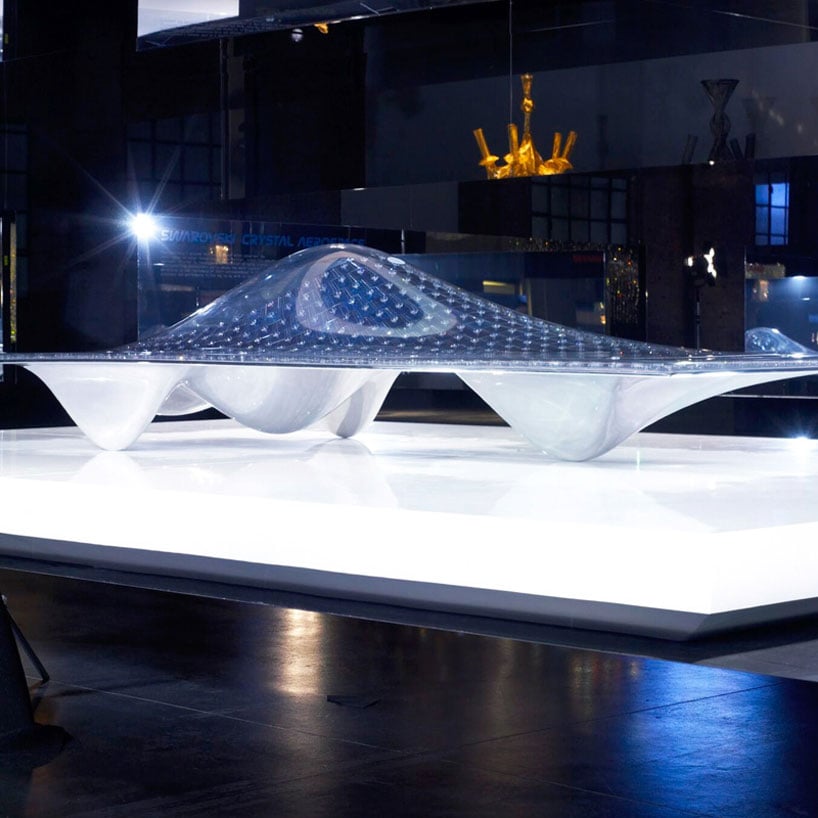 I don’t have a bedside table, rather a huge pile ofbooks that are next to my bed, mainly on art and architecture:anish kapoor, toyo ito and many exhibition catalogues.

do you read design and architecture magazines?

I dont read a lot of magazines, the only ones that I do are normally scientific ones. 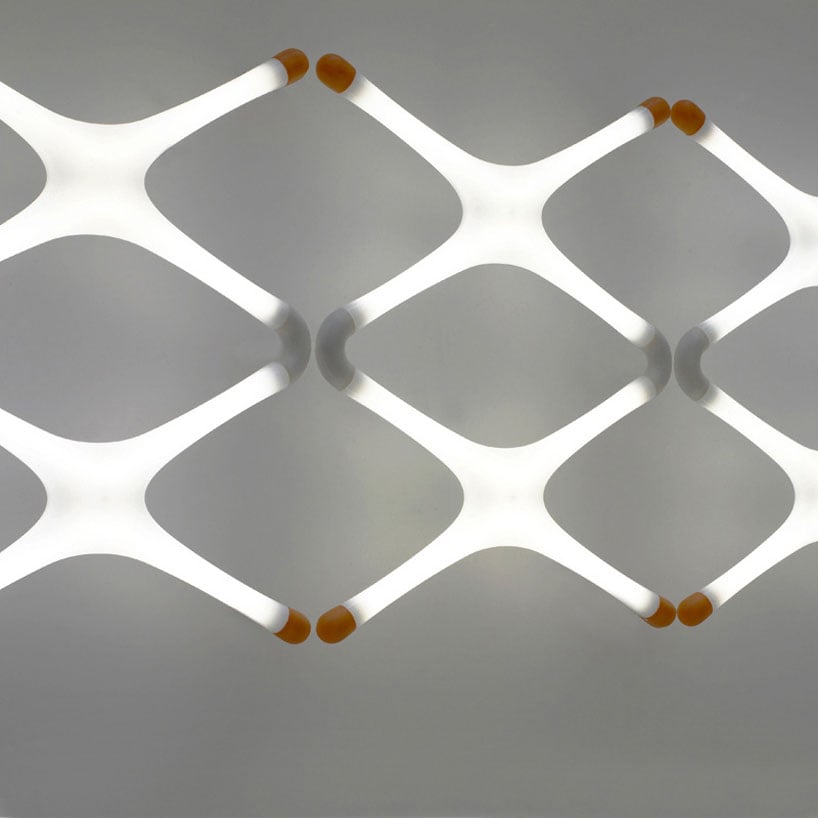 ‘systemX light’ for yamagiwa, 2005.a single ‘X’ module can be configured to achieve ordered geometries from modules of 2 to 3 up to large horizontal or vertical planes of infinite number.

I’m a bit of a news addict, I can watch the news repeatedly, I like current affairs and to stay informed. I read the herald tribune, the wall street journal and the independent, which I like very much because it gives you real, relevant events relating to humanity.

I assume you notice how women dress.

I’m attracted to women who dress elegantly and relative to their age. those who dress with some refinement and attention to their own body. if a woman can walk well, that’s a huge thing. it’s really a combination that would catch my eye.

are there any clothes that you avoid wearing?

I would never wear a duffle coat. 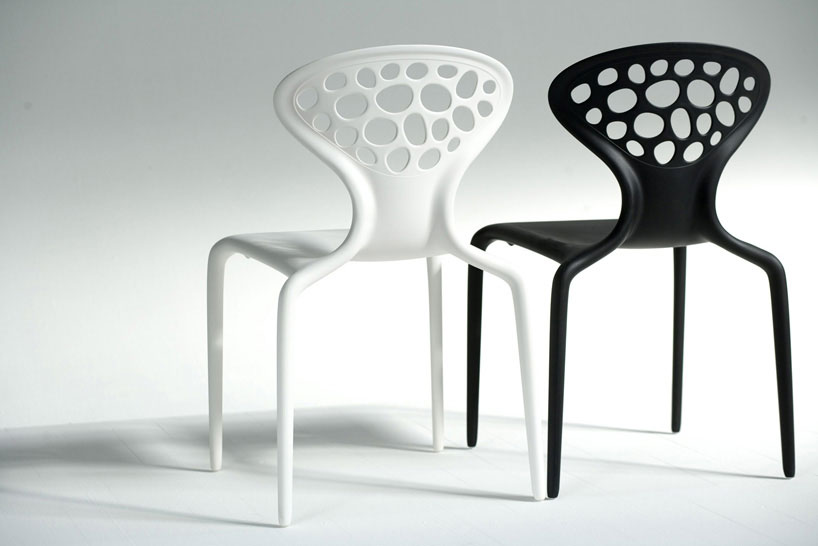 when you were a child, did you want to become a designer?

no, it was rather incidental. I don’t come from a family that has any relationship with design. I grew up in wales in a military family, so there’s a sense of strategy in me which helps me organize. I didn’t know that I would be a designer, though I’ve always been interested in form since I was a young child.

I mentioned david bowie, I’d like to work with a great musician. somebody that I could design a great bespoke musical instrument for that would perhaps allow them to experiment. 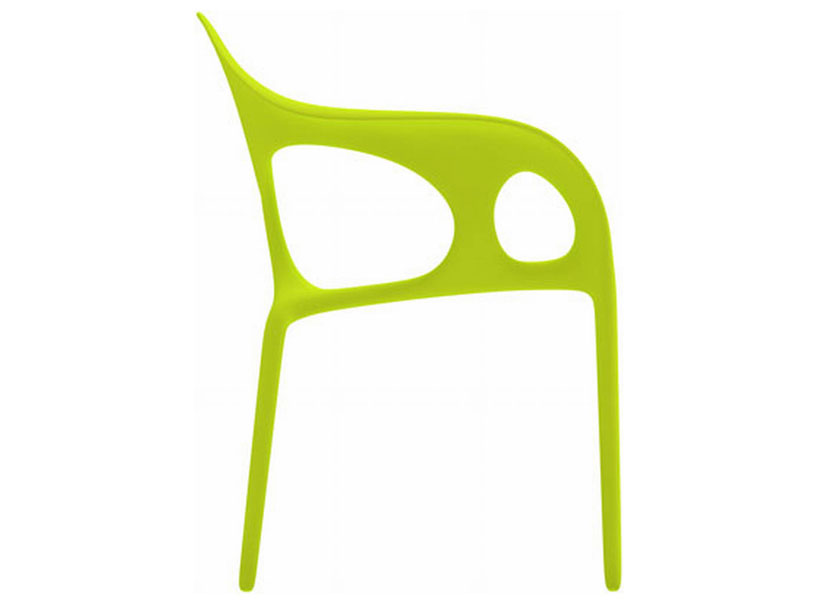 do you discuss your work with other designers or architects?

I’m quite open and happy to tell people what I’m working onothers don’t want to do this so much (laughs).I don’t really talk with other designers about design that often. I have a better dialogue with architects, zaha hadid, kazuyo sejima and david chipperfield. architects do some pretty exceptional things these days and I’mfascinated by their ability to create such incredible structures.

I’m an evolutionary biologist, more than a designer.I don’t know what design is anymore, I create form,I understand form and I’m enjoying the digital age to create it.I’m hoping to push that even further. my work also relates to nature, in an evolutionary sense as I’m concerned with reduction. I exercise what is called ‘organic essentialism’ which means using nothing more – nothing less than is needed.I feel comfortable in this organic, isomorphic, anthropomorphic, liquid age of making things, but I try not to force it into things that don’t need it. 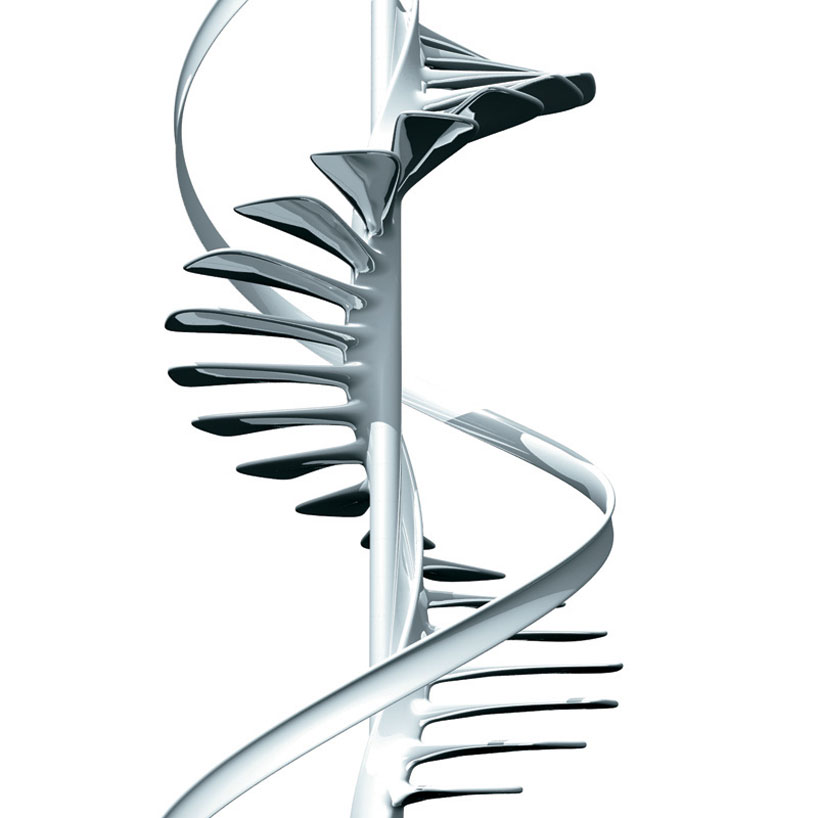 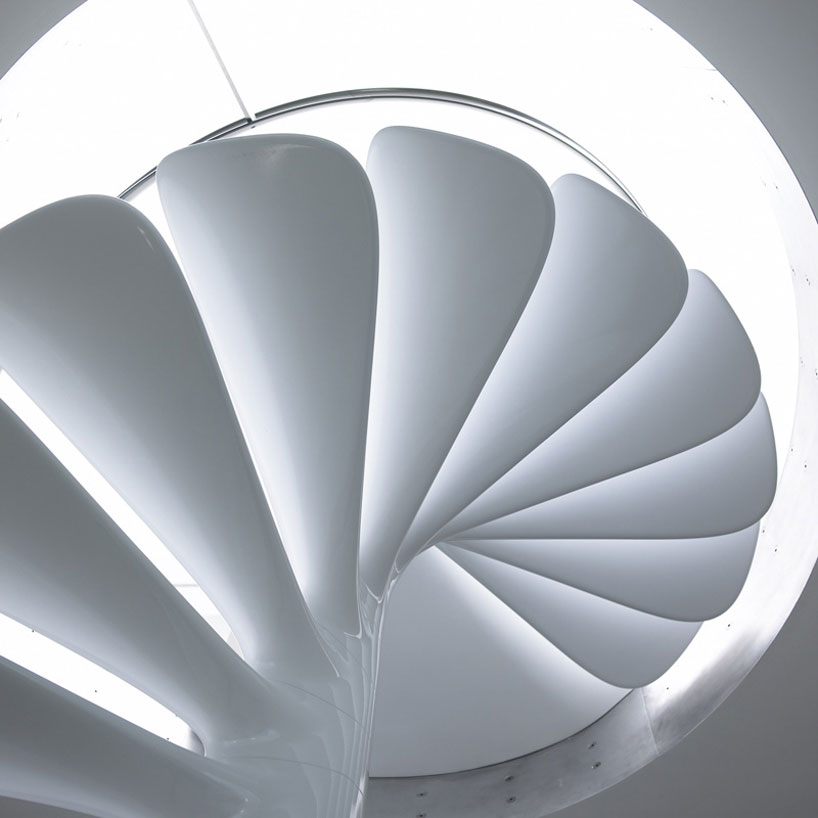 personal projects because I’m doing them for myself.for the last decade or so I have been working on my own pieces, which the world has not really seen. I will have a show next year (2007) in new york with philips de pury called ‘endurance’.it will feature for the first time a number of pieces that I have madein carbon fibre and aluminum. these pieces really synthesize the concept of ‘organic essentialism’. exhibitions are a moment of hesitation for me, I’m looking internally at what I do so that I can grow again. then there are the products that I’m known for, like the water bottle for instance, that have sold very well, but these projects for me are really more about the meaning of ‘why we produce them’. I’m always trying to do things with minimum resources but at the same time achieve the maximum civilising effects. ultimately I’m looking for a ‘system’ that can let me approach the work that I do with some degree of logic and intelligence.

can you describe an evolution in your work?

one grows up, one has a series of influences and those influences bear down on how you design objects. some of my early work was experimental. I was exploring and trying to see where I would fit in. a defining moment was a camera that I did at the royal college of art. at the time memphis was all the rage, I doubted that whole scene, all the colour and form didn’t feel very natural to me. I designed this camera, that to me defined restraint, which I still have in me. something like the staircase in my studio, a self made object, which has everything that I’m looking for – in terms of calming it down, elegance of form, minimum material, appropriate technology and succinct function -. if I were to do a camera now though. I have this feeling that I should do it in a weird sort-of cartolage material, somewhere between nylon and silicon. I’m currently looking at systems called netification, coralization and reduction of mass through perforation and so on, not necessarily in terms of products but cars and architectural projects, that I am working on. 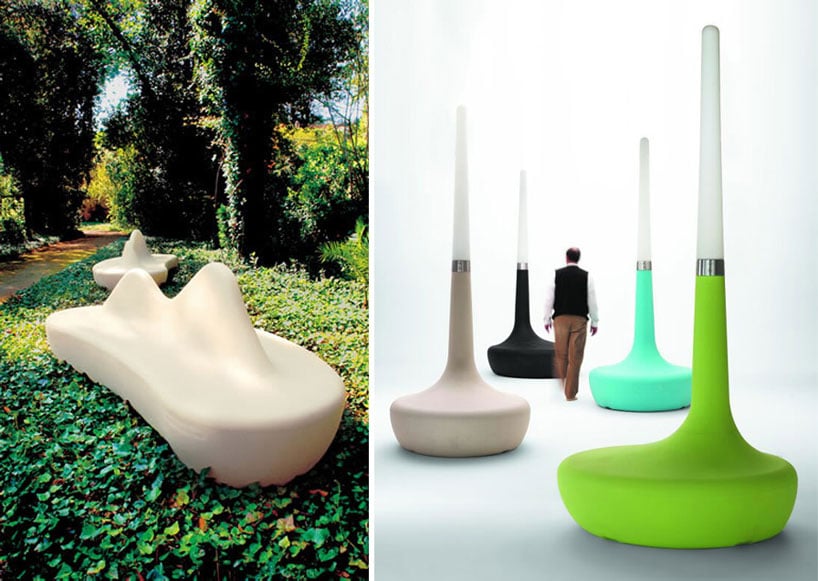 is there a designer or architect from the past that has

influenced you or that you particularly appreciate the work of?

I guess I have been influenced more by the work of artists.to me jackson pollock was a genius. I’m very curious of the level of insanity in throwing yourself at something in the way he did,and how it creates such incredible profundity and value. it produces such uniqeness and something that is so far away from the crowd. popular culture is not where the value is because its not sustainable. it’s transient, throw away ideas and I’m not interested in this. I’m interested in the longevity of ideas. looking not too far in the past I love the work of renzo piano, shigeru ban, and george nelson. I also like people like mariko mori. I think that her work is incredibly visionary. also anish kapoor, so good that it makes you want to give up! it’s very spiritual, and I don’t see products that move you in thatsame way. I’m trying to understand how I can put some of this into a product. everyday objects which people can be lifted by but that are also responsible in terms of morality and how they use materials and function. 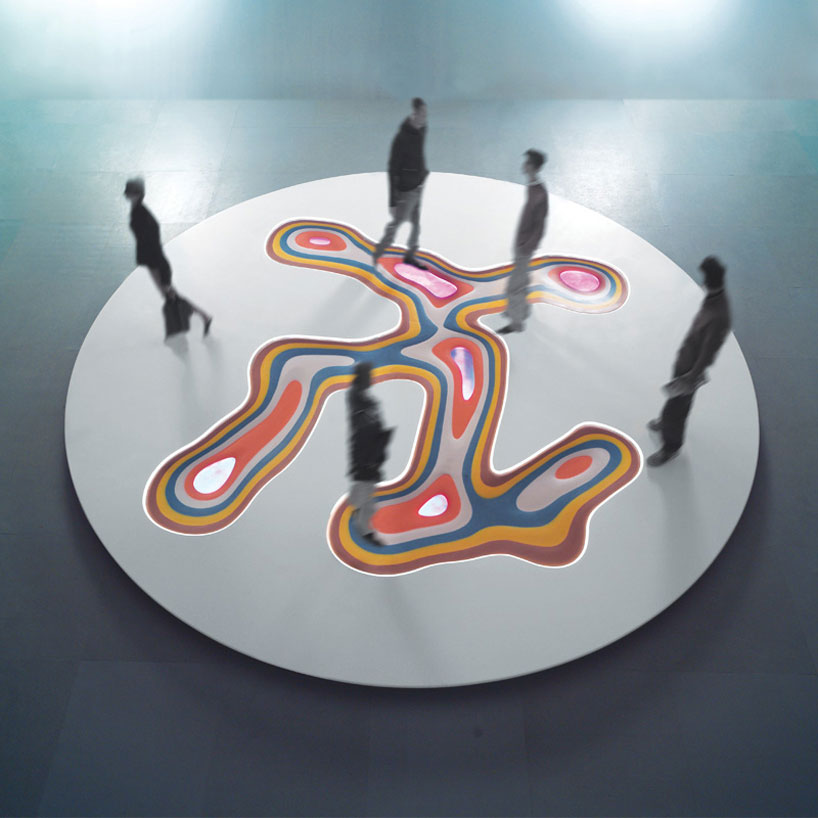 there are so many different approaches today.look at kazuyo sejima and how she is trying to re-define surfaces, how she finds materials to amplify and at the same time reducethe sense of materialism.also ‘the new generation people’ like greg lynn, the digital architects. it’s the beginning of something and once that gets going it will be incredible. I’m fascinated in how the new generation of designers that’s emerging will use their computer based skills, what will come of that. in ten years time I’m sure that architecturally we will see some profound changes in form. 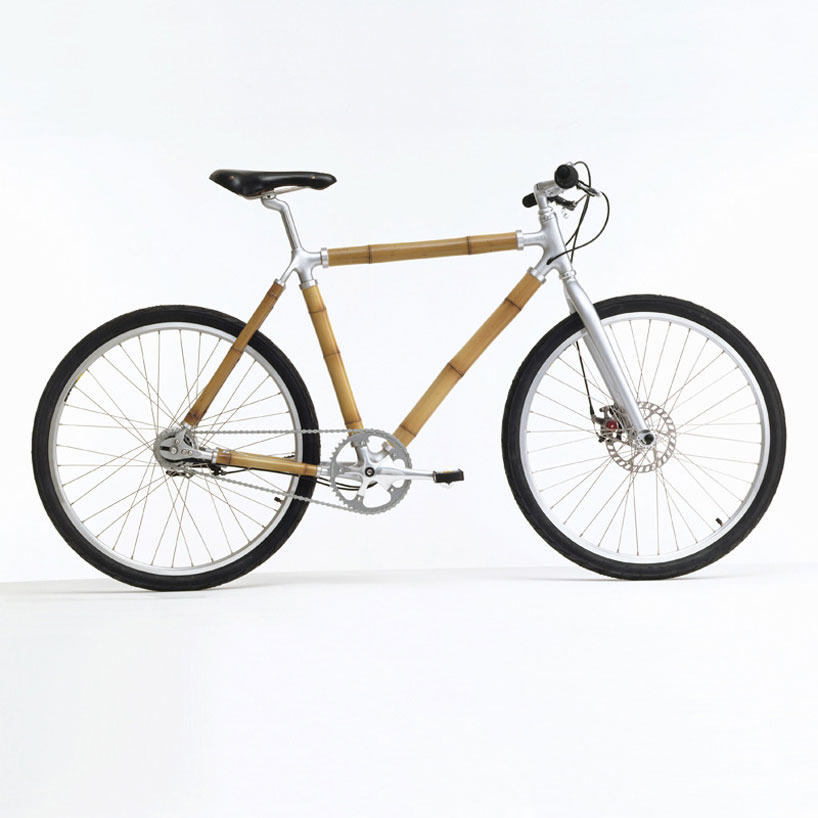 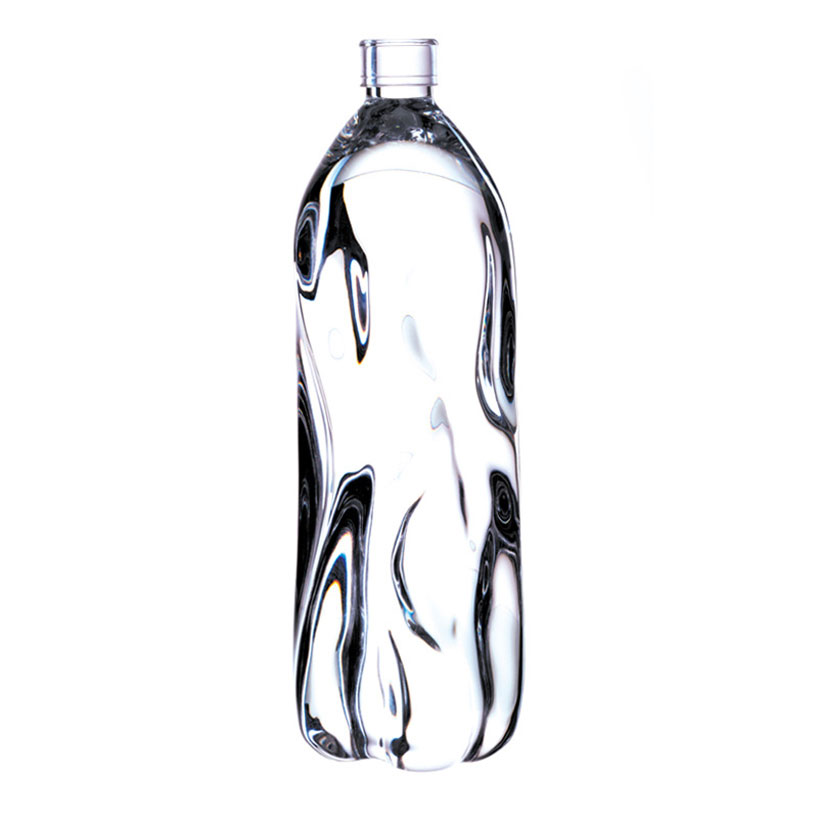 I like the work of john maeda, and I do work with a number ofgraphic designers such as mark farrow, but this is more on the ‘commercial side of things’. I have clients who have the need tocommuncate something very specific. it’s less isoteric and morecontrolled. however I dont get so involved. I’m such a three dimensional thinker, when things become flat it isn’t easy for me. 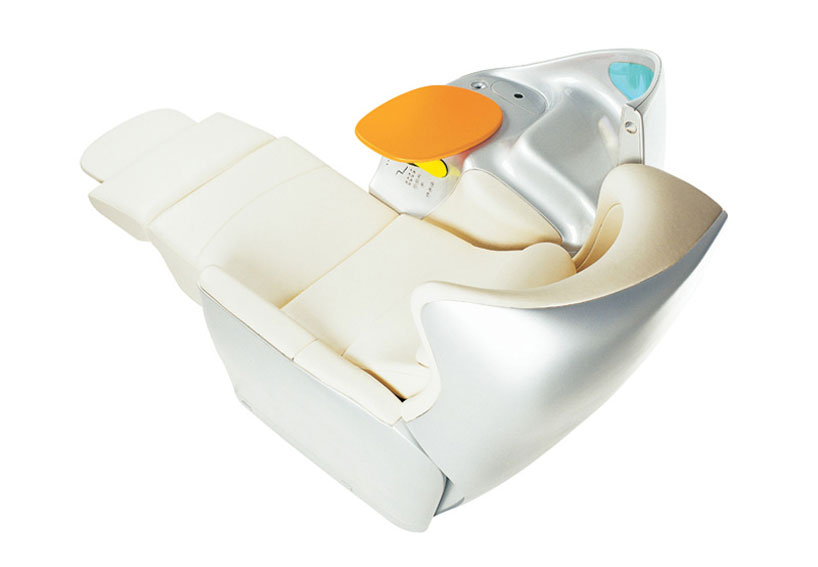 ‘stay positive whatever happens’ because people like positive people. have stamina, this job is very demanding. you are always busy (that can be a good thing though, if you like what you do). try to remain individual and don’t copy others. to begin with it’s okay – as a point of reference – but then try to move on. watch out for a corner of this earth and make it your own, do something that has relevance, that ‘has legs’ and can go forward. also, think about good environmental solutions. we are going to go through a new industrial revolution of sorts at some point, because we can’t keep using resources the way that we have. 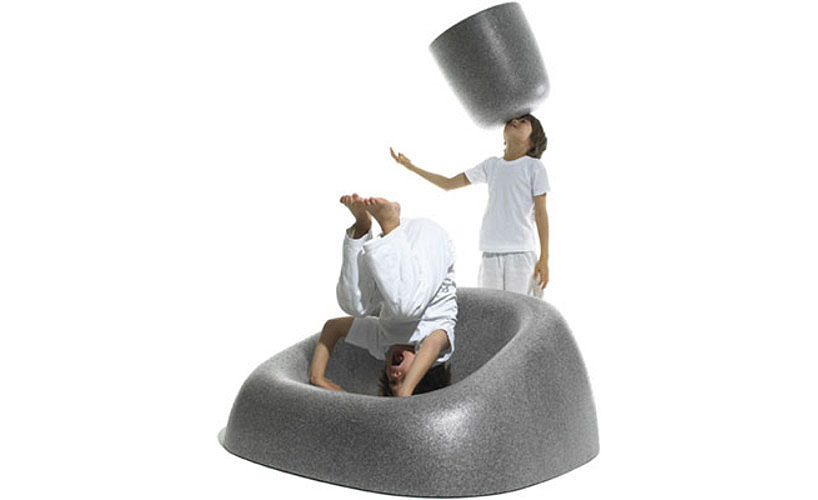 is there anything that you are afraid of regarding the future?

it is a bit like boiling the frog at the moment, something is bubbling on the surface.we don’t get a big picture. we live in these big cites where food is delivered to our door and everything else is there for us. I don’t think that we fully understand the implications of CO2 emissions, population growth and resource draw-downs.the issue of china becoming a consumerist nation. there are some really big things on the horizon that will eclipse the facile, superficial debate going on at the moment about aesthetics. there is an amazing potential for the industries, brands to engage in something that is way much more global and human in the bigger debate. there is more opportunity and business to be made joining this front rather than going against the grain of human needs. if you see something designed, for example by dieter rams, you might say ‘that’s restrained’ and ‘quiet’ and ‘calm’, but it’s a complete misnomer to think that only things which are linear and of a particular scale are modest . an egg chair by arne jacobsen, which is completely organic is very modest. so, we as people need to understand that by jumping into the world of form you can reduce mass and material but still create something that has more a ‘joy of existence'(that relates to every question that you have asked me -what women wear, music, everything).