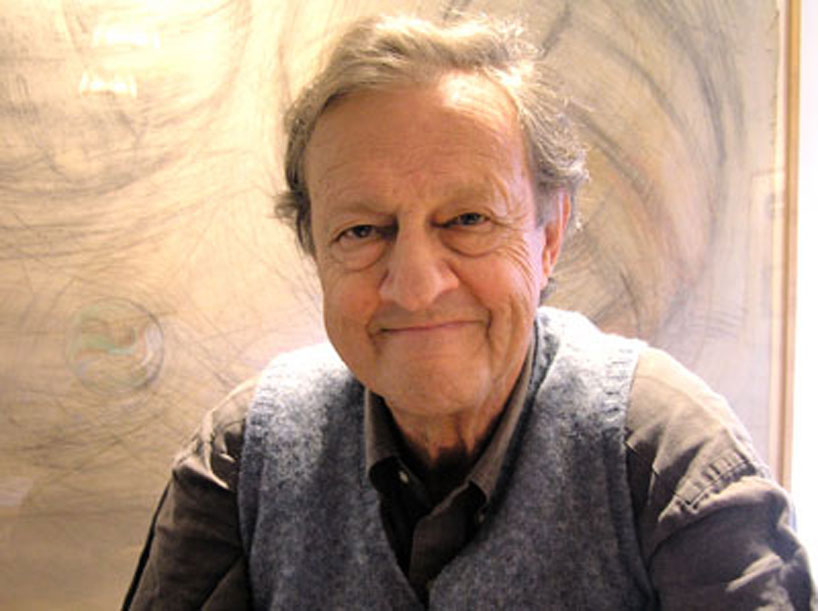 ivan chermayeff — the designer of NBC’s iconic prismatic peacock, chase bank’s heptagonal blue logo, and the smithsonian’s sunburst logo, as well as hundreds of posters and campaigns throughout history — passed away on december 2, 2017. on may 18th, 2007, designboom met with chermayeff in new york for an exclusive interview. read the conversation in full below.

ivan chermayeff (IC): it varies, it’s never the same. usually it’s when something good happens, like a check arriving in the mail!

DB: what kind of music do you listen to?

IC: I’m very keen on country music, but I like all types of music. classical… I’m very open about it, and ignorant.

IC: I don’t read too much fiction, usually it’s books to do with what’s happening in the world. I’m reading a good book on the disasters of the bush administration called ‘unchecked and unbalanced’ by frederick a. o. schwarz and aziz z. huq. the authors are from a place called the brennan center for justice at NYU school of law, very liberal people who are interested in justice and equality. 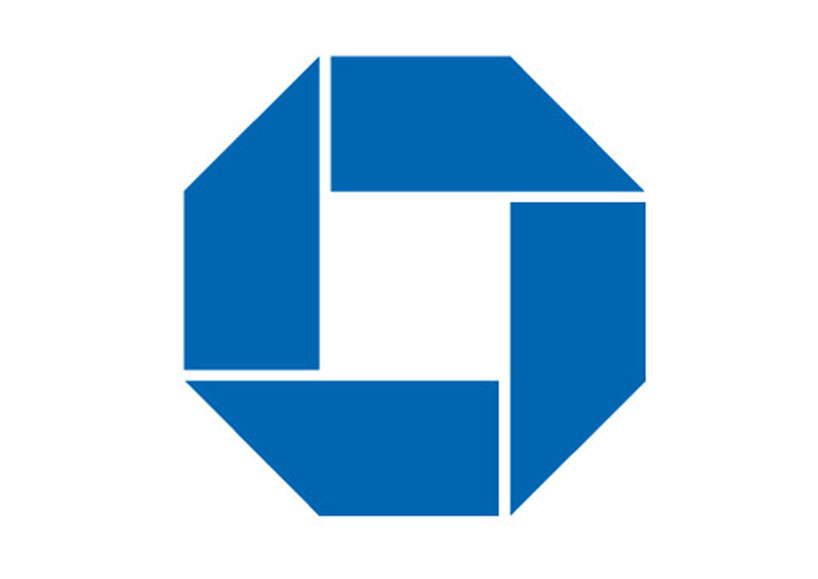 DB: where do you get your news from?

IC: anywhere except television, mostly the new york times, which has its flaws, but it’s the best U.S. has.

DB: do you read design, art or architecture magazines?

IC: the studio subscribes to quite a few so I see a lot of design magazines.some are better written than others, but usually it’s a visual matter. I haven’t found that there is any criticism of design that is worth searching for. 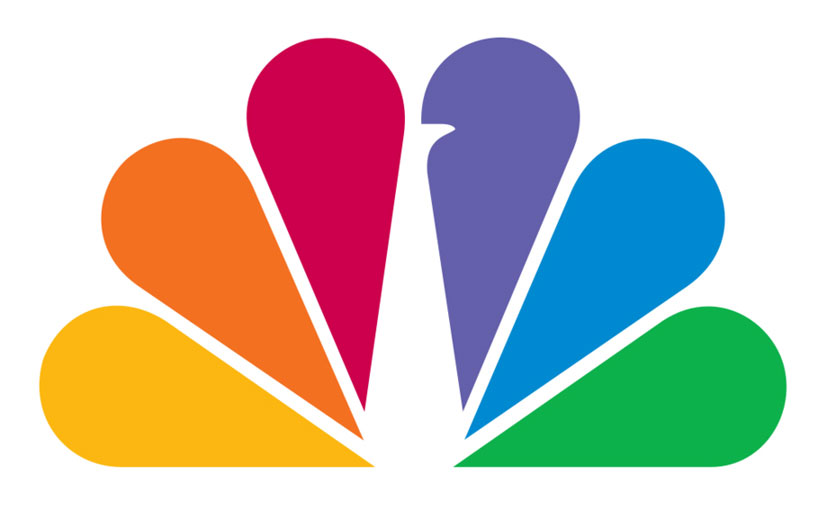 DB: I guess that you notice how women dress, do you have any preferences?

IC: as little as possible is usually the best!

DB: what type of clothes do you avoid wearing?

DB: when you were a child did you always want to become a designer?

IC: well my father is an architect so he always encouraged the artistic side of things in my brother and I, poking around in the mud or any other idiotic things that we might have done. the idea of being a designer came to me early on, not because I knew what it was as much as I didn’t want to be an architect, which as I say is what my father was and my brother became. architects work on things that take a long time and often fail because of lack of funding or whatever reason. with graphic design there is the advantage that ninety nine percent of what we do is produced so you can also move forward with what your doing faster. it might have a shorter life-span but there’s a lot of it and often less politics involved than in architecture.

DB: where do you work on your projects?

IC: sometimes I make collages in my studio at home, the rest of the time I work here with the people in the office, who are a very co-operative bunch. tom (geismar) and I always know what each other are doing, we interrupt one-another and comment on the work we are doing which we encourage the other people who work in the studio to do as well. this open exchange makes things as efficient as possible. 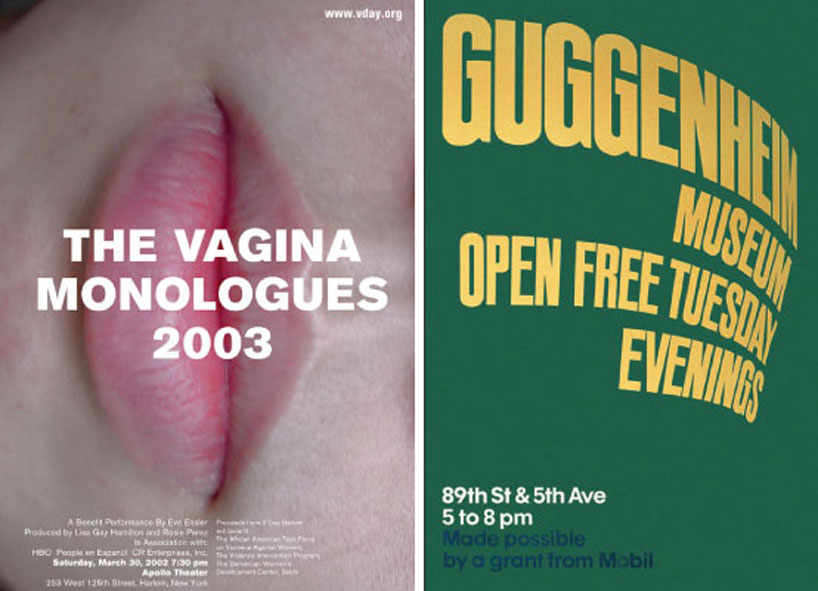 DB: how do you normally approach your projects?

IC: well, we do more homework than I think most designers do, you have to know what you’re going to do before you start designing, obviously you can change your mind as you move through it. we are very questioning of the briefs that we get from our clients because if they really knew what they wanted to say then they would say it themselves. the  truth of the matter is that clients are sometimes ignorant to the reality of the visual worlds and at the same time are too close to what their doing to have perspective. this isn’t always useful because then the facts begin to bend and it makes a simple and strong result harder to achieve.

DB: do you discuss your work with other designers?

IC: we don’t really discuss our work with other designers. we collaborate with so many creative people – writers and photographers in particular – because they’re part of what we are doing in terms of communication. if we are working on a project that requires sound or animation for example,  we need help. they’re are a lot of people who are good at what they do, especially here in a city like new york so it’s always good to bring people in to work on your assignments so that they can reach the best level of quality. 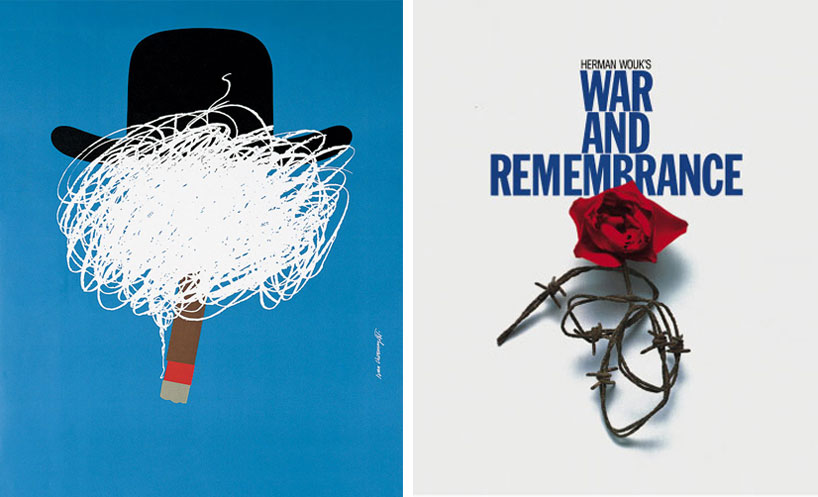 DB: could you describe your style as a good friend of yours might?

IC: it’s not really as easy as that because design is a service, you do what people need, not necessarily what they like
but what you feel that they should have. if the client is clever and already knows that they have a particular problem and they come to us they already have an idea of what type of service they will get. we try not to have a style, perhaps the work is recognizable as ours but I thinkthat it would take a very discerning eye to know that. what we have as a constant thread in our work is trying to boil things down to being strong and very simple and looking as though they happened very fast – which they may not have! (laughs)

sometimes it can be quite a struggle to get to what we end up going with. what a lot of people don’t understand is the process of distillation, that you can get paid for doing something that can be drawn on the back of an envelope in three seconds, but it can take a lot of work to get to that point sometimes. the most important thing is to understand who your client’s audience is. it’s too easy to be too sophisticated for people to understand, too illegible or whatever else. it’s also important to understand your clients media, for instance you are on the web, a chinese restaurant is slipping flyers under doors, you have to know how it works and act accordingly.

DB: which of your projects have given you the most satisfaction?

IC: no particular project. when you have been in the business as long as we have that’s a long list to choose from. we’ve been working for fifty years so I can’t remember all the jobs we’ve done. some are very satisfactory because they look as though they are fresh after decades have gone by, those things that can survive the weather. it’s great when you see something again that you haven’t seen for a while and it still works, that gives you a nice feeling because you know that you have done something worthwhile.

DB: could you describe an evolution in your work?

IC: the process is different for every client, in the sense that with some you really do have to go through a learning curve, which can be time consuming and difficult. as I said before it’s important to understand what you are doing, your audience and so on before you start designing, this takes time. this is an idea based business are far as we are concerned. if it’s trendy and looks nice, if you put flashy effects or whatever around a word that’s not an idea that’s just copycat nonsense and it looks like it. for us it’s not a question of what sells it’s a question of what works.

IC: it would be very nice to help some candidates for public office, because we need leaders very badly in our time
whether it’s here in the U.S. or wherever you are. good leadership is what makes everything come to pass well. occasionally in our profession you actually feel like you could help some of those good people who are foolish enough to become politicians.

DB: is there any artists, designers or architects from the past that have influenced you or that you particularly appreciate the work of?

IC: sure, there are lots. paul rand, I don’t think that I saw anything of his that I didn’t like. guess that I am more influenced by artists, I get a lot of joy from looking at the works of the great modernists and classicists like miro, matisse and picasso, the door opening artists of our times.

DB: and those still working today…

IC: yes, many again. there are probably more that I don’t like the work of, but I can’t tell you there names because I block it out (laughs). to name someone I’d have to say richard serra, I think that he is a tremendously powerful force of understanding. there are some good architects out there too, frank gehry, richard rogers and a handful of others who are discovering what technology and computers can do. just as computers changed our profession enormously they are now doing so in architecture. whilst on average it raises the level of quality greatly it also lowers it from the top end, because people rely on the computer too much and forget that it’s really all about ideas. its not to say that’s the end, it just takes a long time for the level to rise again and it inevitably will it just doesn’t happen very easily.

DB: do you have any advice for the young?

IC: one is to draw a lot. the other is to work hard and be as self critical about what it is that you’re doing. don’t be put down by not doing something, don’t let it stop you from going further. another thing, don’t do projects for companies or products that you think should be eliminated from the face of the earth.

IC (continued): there is a lot to be afraid of, in design and everything else. we are ruining the earth at an incredible rate and it’s a major concern. in my opinion we have already screwed it up royally. there is a big problem in having a short term view and a long term view of the situation. most people in-particular politicians have a very short term view and the world cant afford it, we can’t afford it. its shocking to read that we plan to cut Co2 emissions by fifteen percent in the next thirty years, who says we have thirty years!

designers should do something about it, by their way of thinking which is problem solving. designers need to be activists and do whatever it is they can. creative people should get more involved and contribute to something instead of just massaging their egos.

Jan 13, 2023
turbulent electrifies remote locations with low-maintenance vortex turbines
turbulent states that its vortex turbines can power communities, cities, and villages with 50 to 500 households, 24/7 and all year round.
technology
380 shares
connections: 15