what kind of music do you listen to at the moment? I am listening to an american group which plays post-electronic music.

do you listen to the radio? ya, sometimes … if I am in berlin, I am listening to a radio station which has more news content, and in barcelona, I listen to a station that covers mostly international music. 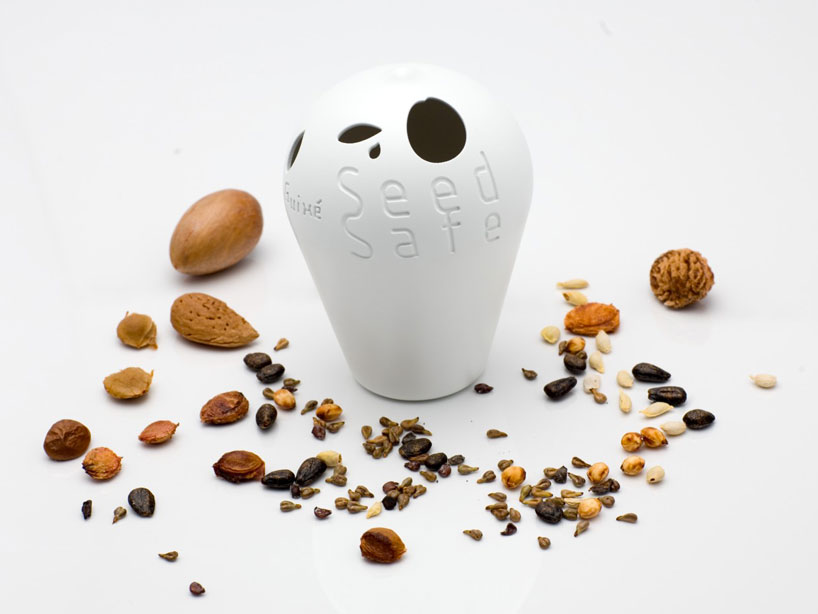 ‘seedsafe’ in stoneware for alessi, 2010 for collecting seeds after eating fruit, photo by inga knolke, courtesy of alessi 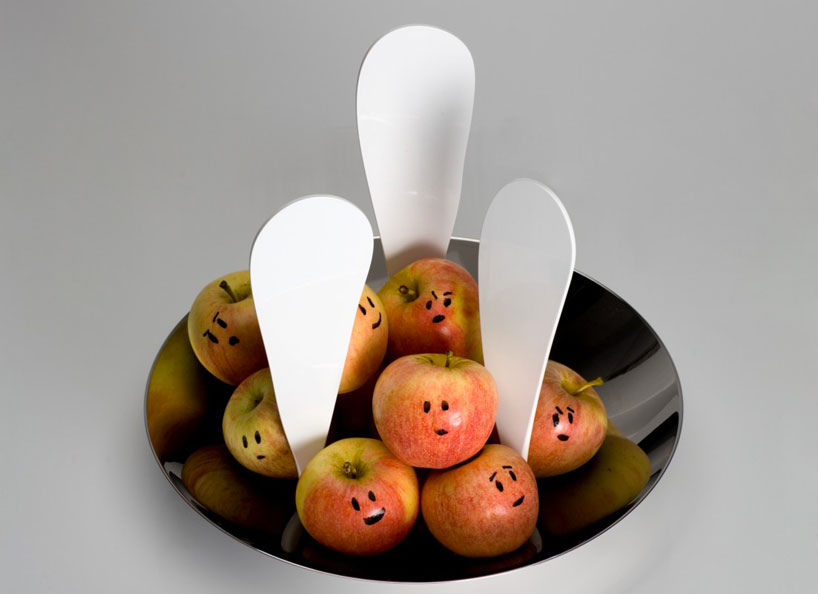 ‘fruit holder’ in 18/10 stainless steel with message board for alessi, 2010 photo by inga knolke, courtesy of alessi for more images of the projects, click here. 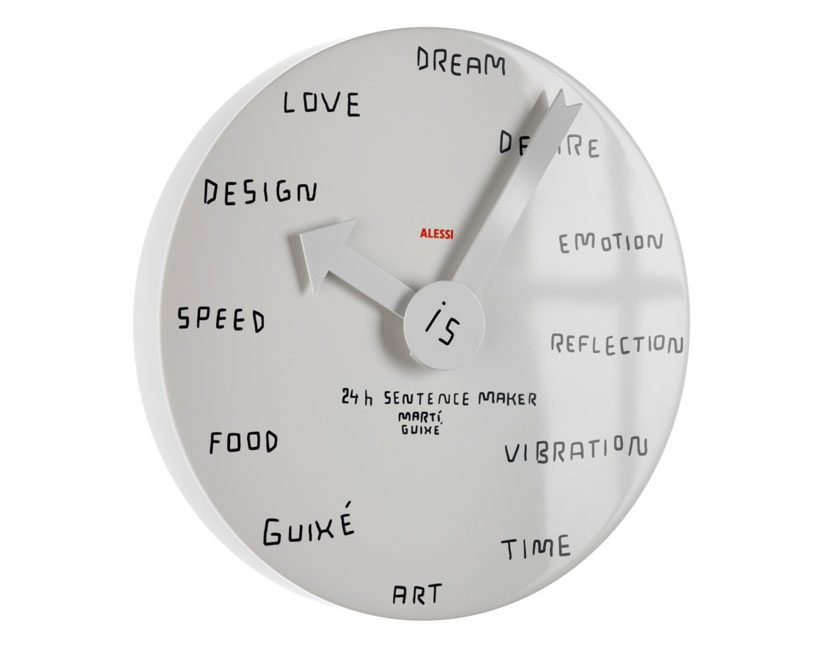 what books do you have on your bedside table? none really. I am so tired when I got to sleep that I don’t read in bed. I read mostly in airplanes or when I am waiting for something and then I am reading books about philosophy or those which are factual. I don’t really often read novels, but this summer I have read a very good one. it was called ‘2666’, by roberto bolaño, a writer from chile. I hate bad novels and it’s hard to find one I like. let’s just say I am reading continuously, but they are more books of information – philosophy, trends, books that cover specific topics… now I am starting one about duchamp and the connection with technology during his time.

where do you get news from? newspapers and the internet.  I don’t have the habit of reading the newspaper everyday. I search for specific news online. if you take a local newspaper, you will be confronted with local news, or the latest news. if you are interested in some specific news you have to reach the net. 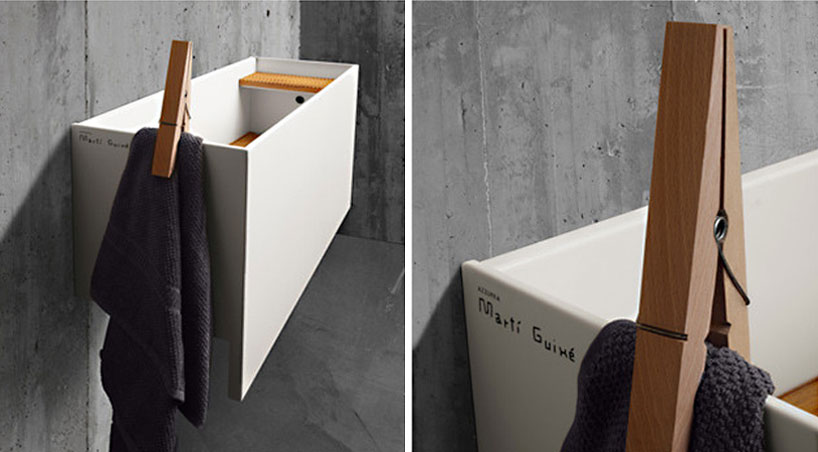 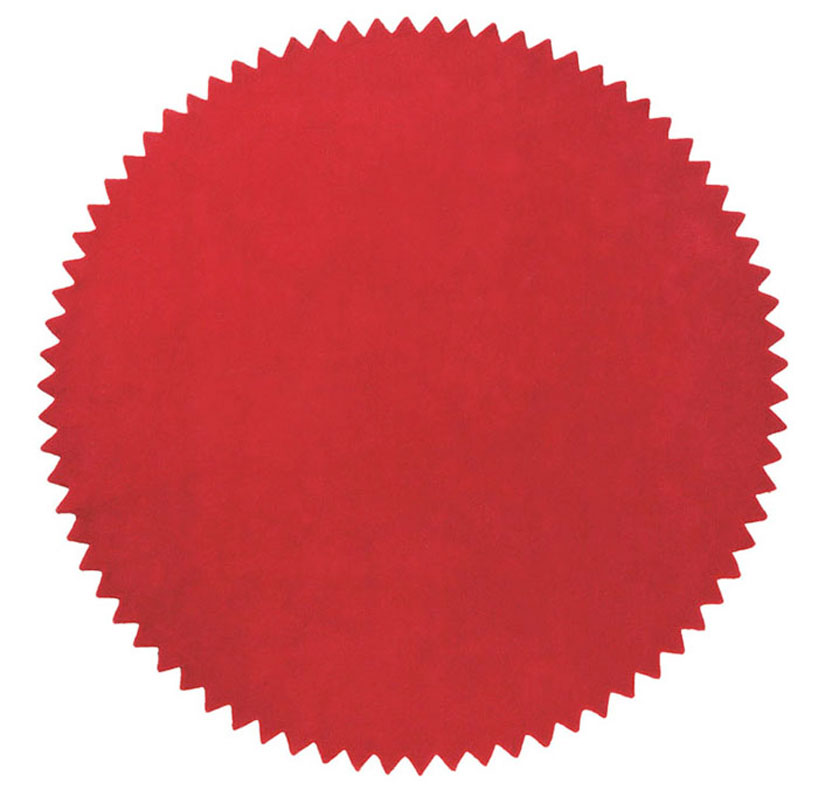 ‘news rug’ for nanimarquina, 2010 with huge visual impact, the rug makes use of one shape, in two sizes and one color, simple and striking, its jagged circular outline recalls graphic techniques used in advertising. 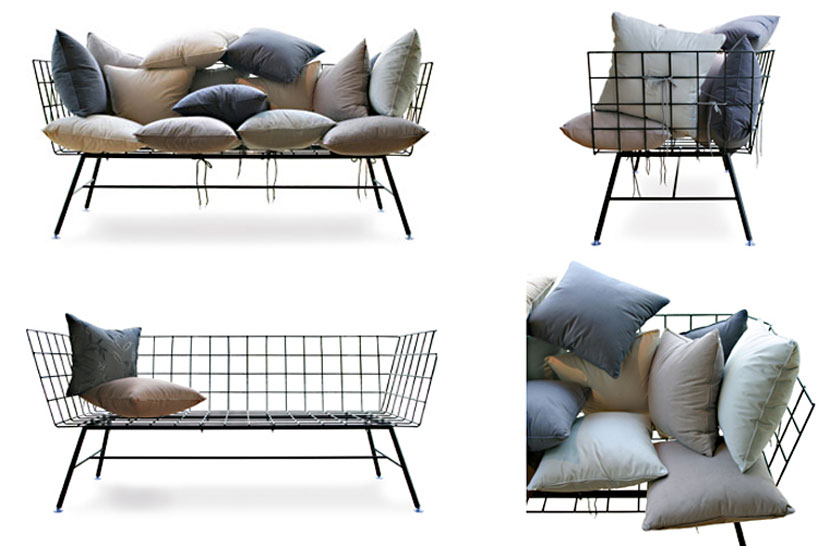 I assume you notice how women dress. do you have any preferences? I don’t know what to say (laughs)… I do a lot of work for companies who sell clothing, so I know it’s very targeted and there are very identifiable dressing codes related to cultural, social and geographical segments… so I don’t know. personality…

do you have any pets? I like growing tomatoes. last time I was growing some tomatoes in barcelona and then I had to go to berlin and to milano so I thought, what shall I do with the small growing plants? so I had to put them in my suitcase. for one week I was giving them water and from milano I took them with a car to barcelona because no flights were available because of the erupting eyjafjallajökull volcano in iceland and finally I planted them. I lost two because I gave them as a presents. 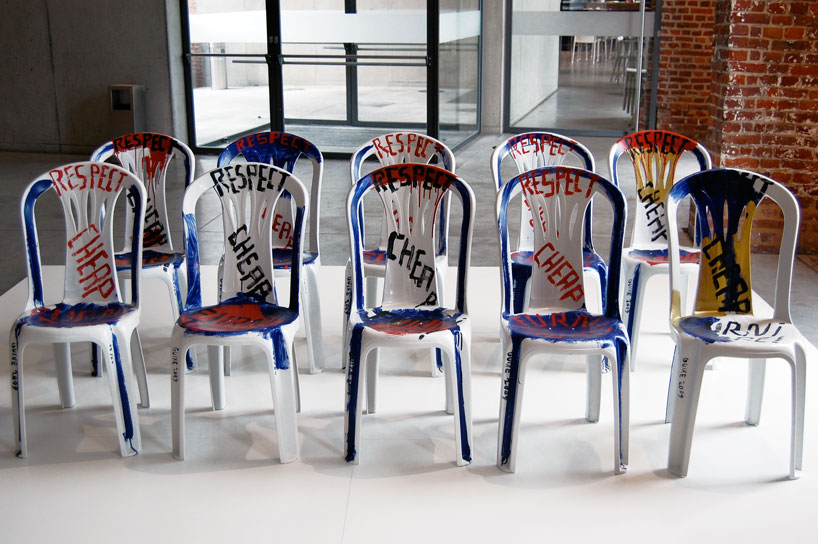 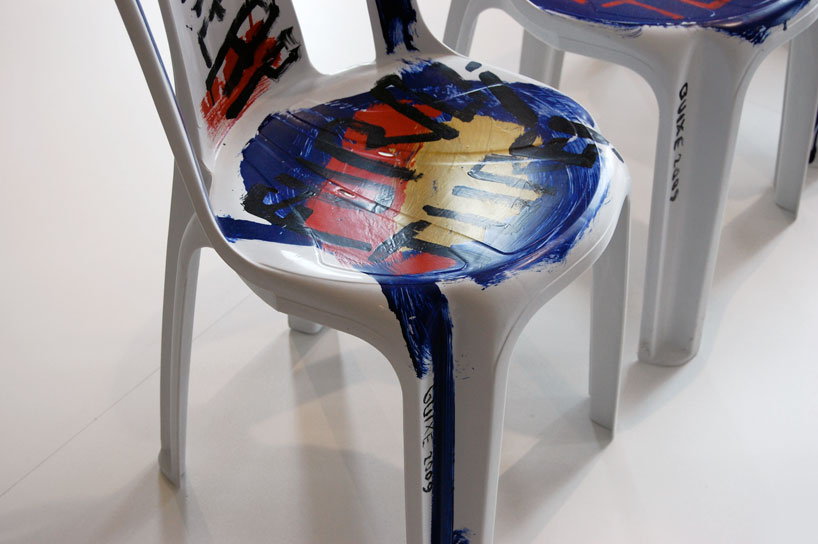 when you were a child, did you want to become a designer? no, I probably didn’t. it was a decision I made after school. I wanted to do something that requires interaction and an active approach. I wanted to learn the skills to know what is real and what is promotional.

where do you work on your designs and projects? everywhere. because they are mostly based on ideas.

do you discuss your work with other designers? yes. for example my girlfriend is a kind of idea coach. she gives me a lot of feedback. I have a good friend who specializes in anthropology, probably more related to the world of art, who helps me a lot in bringing contrast to my ideas and verifying whether they can work or not. 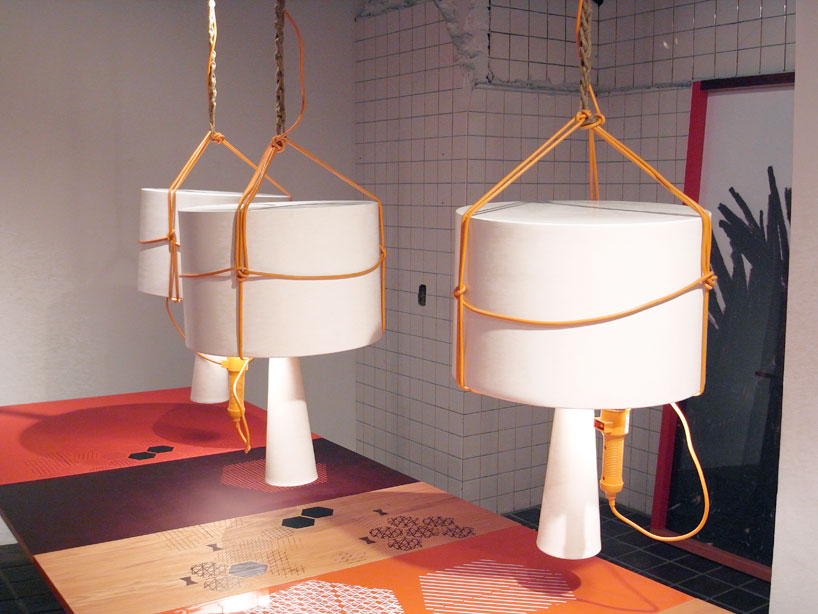 describe your style, like a good friend of yours would describe it. I would say: I’m trying to create new typologies and to be radically contemporary. my friend would say: he analyzes situations, behavior and gestures and proposes effective solutions with minimal ergonomics. in a simple, honest, reassuring and metaphysical way. (laughs)

please describe an evolution in your work, from your first projects to the present day. when I was starting, I was much more radical. I was trying to design functions without shapes and now I am getting interested in material values like history, or the kind of things that you cannot buy – that you have to proceed with a social technology. now I am more sophisticated in the way I proceed.

what project has given you the most satisfaction? maybe ‘hibye’, it was a commission of the MoMa in new york. it’s a very strange project because I was convinced to design something like a wearable computer and I came up with statements and pins. I spent a half year researching for. I got to know everything about the nomadic world because the project revolved around that lifestyle. some day I have to write about it because it’s still very contemporary. it’s continuously very present in my work. 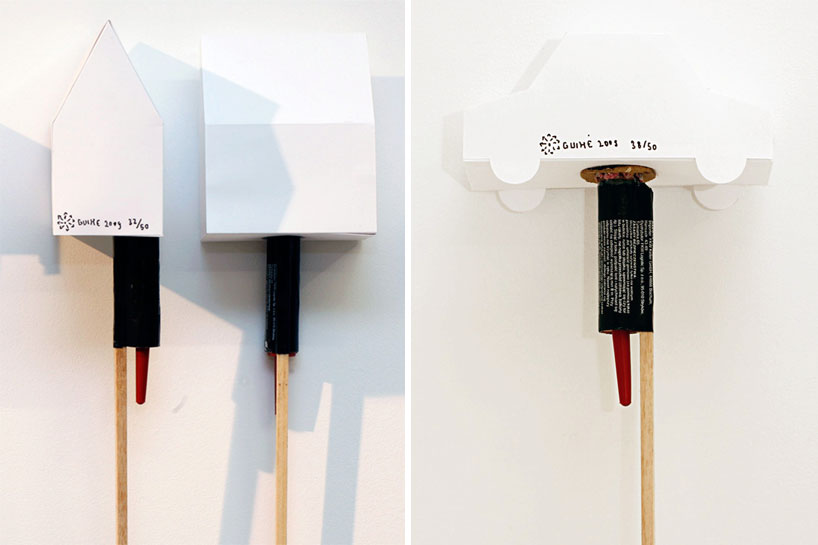 fireworks, 2009 for more images of the project, click here.

who would you like to design something for? I don’t know. hmmmmm…. I’m interested in developing different kind of projects, but not specifically for somebody. by doing so I am discovering things and everything is changing all the time. I am very interested in copyrights for example. also very interested in salt. I cannot say more. the art environment makes it possible to test the prototype, similar to a commercial car being tested in a F1 circuit. I often work in such an artistic context.

is there any designer and/or architect from the past, you appreciate a lot? sottsass in his own way was doing a a very commercial thing with memphis ‘proto-design’. very banal and very good.

and those still working / contemporary? I would say the ‘ex-designers’ are THE designers of our time.

it has been almost 10 years since you began calling yourself an ‘ex-designer’. why? to express your disdain for traditional approaches to design? I was a designer, but I thought I do not need to fit in to the parameters of design. until 5-6 years ago, only who created chairs and lamps was considered as ‘designer’. I self-defined myself ex-designer. now, things have changed. ‘problem solving’ is not anymore at the core of this profession. designers provide solutions before they are asked for it. also, the role of the designer today is completely different, because it has much more to do with communication than with manufacturing. for example with retail stores, I usually work on communication, space isn’t that important, the communication of the brand is much more important. 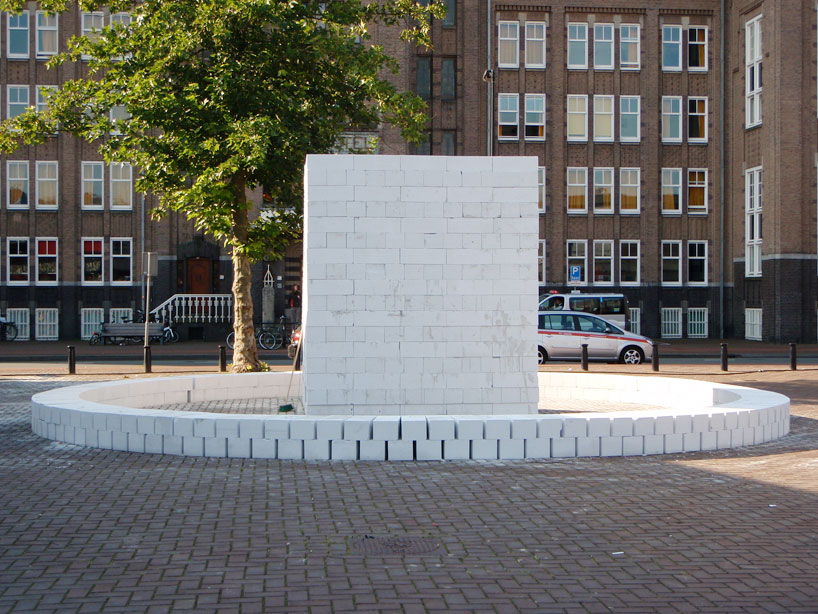 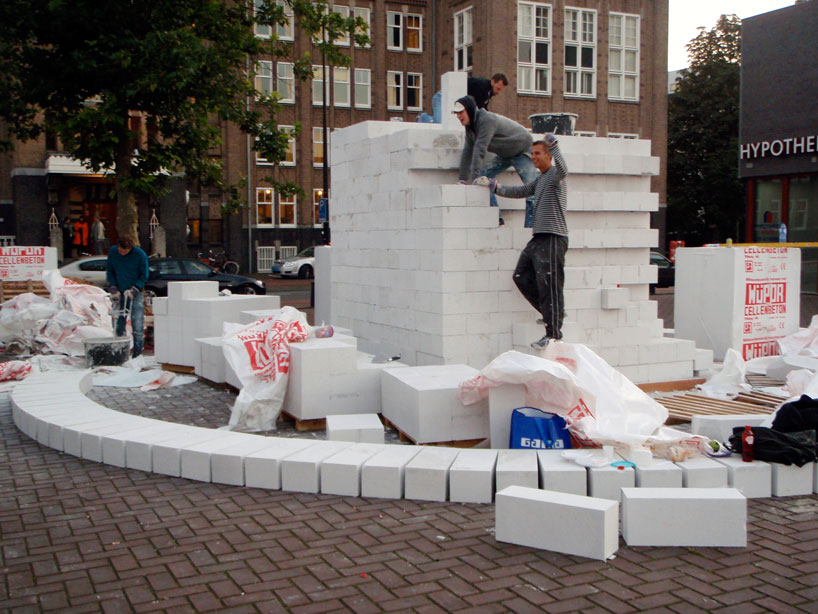 ‘sculpt me point’ installation, part of the ‘urban play: 2 exhibition’ organized by droog at experimentadesign amsterdam, 2008 image © designboom for more images of the project, click here.

what is food design for you? my projects follow a very clear conceptual line: they have nothing to do with cuisine : squaring potatoes, building molecular structures with olives and toothpicks, creating a pie graphic which indicates the ingredients of the cake in percentages, … I rarely work on defining the taste.

a group of students (of the scuola politecnica di design of lambrate in milan) has been working for a week on ‘food design’ projects with you. why on traditional milanese food products? I still consume most of my meals in the traditional way, seated at a table, but the contemporary world is about morphing, traveling. I based this workshop on the link of what we know (tradition) and of how we might act unexpectedly. maybe in the future, we will not need anymore a table? 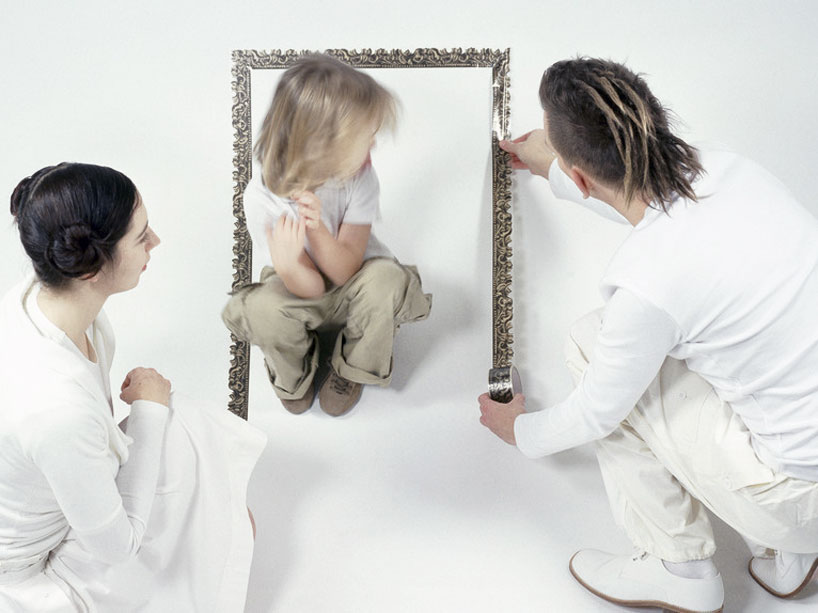 what advice would you give to the young? to cross the borders of design. everything is so traditional and old fashioned. we have in front of us a completely new world, but nobody is designing it.

what are you afraid of regarding the future? I am not afraid. I am very happy to be alive now and even if I think it will be more chaotic and people are saying everything’s worse, I feel it’s wrong. it will be good. 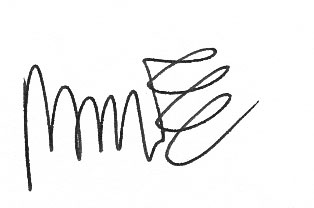 martí guixé martí guixé was born in 1964 in barcelona, spain. graduating from barcelona’s elislava in interior design in 1965, guixé went on to study industrial design at the scuola polytecnica di design in milan the following year. after a job as design consultant, two years in seoul, south korea, he opened his own office in barcelona. martí guixé is considered a pioneer of the food design discipline which he began in 1997. he has since then worked towards building edible products that are ergonomic, functional, communicative, interactive, visionary, but radically contemporary and timeless. he has collaborated with companies as alessi, camper, danese, desigual, droog, magis, mixing media, moleskine and saporiti. martí guixé lives and works between barcelona and berlin. guixé has exhibited at the MoMA in new york, the design museum in london, the MACBA in barcelona, the mudac in lausanne and the centre pompidou in paris. he has produced five books with the italian publishing house corraini.