in a train station, shopping mall or office building, one can’t help but notice the ubiquity of vending machines. boxes dispensing everything from chewing gum to hot meals have become an integral part of contemporary consumption.

while vending machines seem rather new, their history dates back to the first century A.D. the greek engineer hero of alexandria is said to have created a coin-operated machine for dispensing holy water in egyptian temples. this early example was so advanced that its mechanical design was used until the introduction of electrical machines during the industrial revolution. during this period in the 19th century, vending machines were becoming much more prevalent, selling things like postcards and books.

the machines made their way to north america around the same time. it was in new york that the first gum dispensing machine was invented. from this period on the vending machine became an integral part of urban life around the world. machines sold everything from cigarettes to stamps and even hot food in later years. 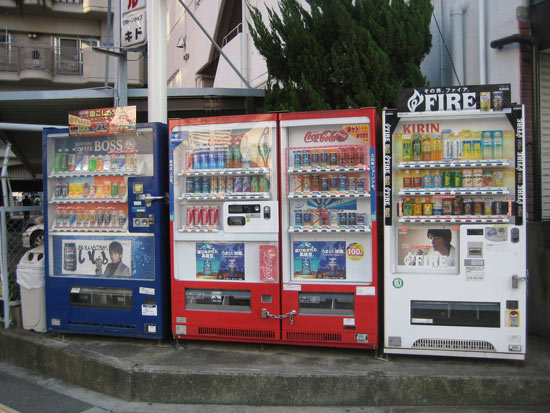 we couldn’t tell you about vending machines without mentioning their impact on japanese culture. more than casual users of vending machines, the japanese have embraced the instant gratification of the machines like no other country in the world. japan also has some of the strangest machines you will see anywhere. from umbrellas to full meals, almost everything sold in japan can be found it a vending machine (this isn’t necessarily true, but it seems like it).

while it doesn’t dispense anything, this vending machine camouflage demonstrates the impact of the vending machine in japanese culture. experimental clothing designer aya tsukiok created the design as a form of commentary on security in the urban environment. the plain skirt transforms into a fully sized vending machine illusion, allowing the user to blend into a typical japanese street scene. 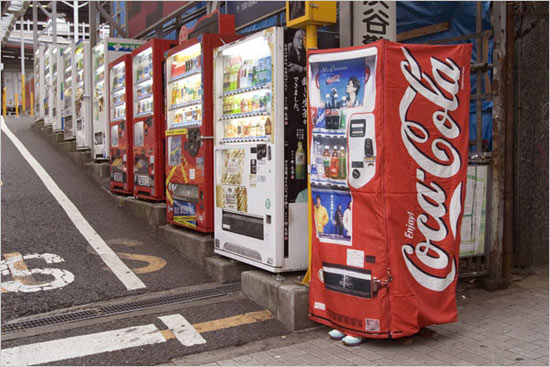 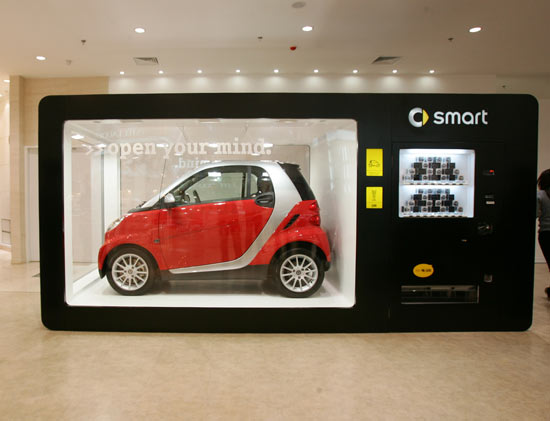 while it may look like this vending machine is selling smart cars, it actually dispenses brochures about the car. the machine was the idea of a smart car dealer in shibuya, japan. the machine gives customers the option of a coupe or cabrio smart car and states the car’s actual value, but it doesn’t accept money. perhaps in the future these machines will actually sell cars, but for know it remains a marketing concept. 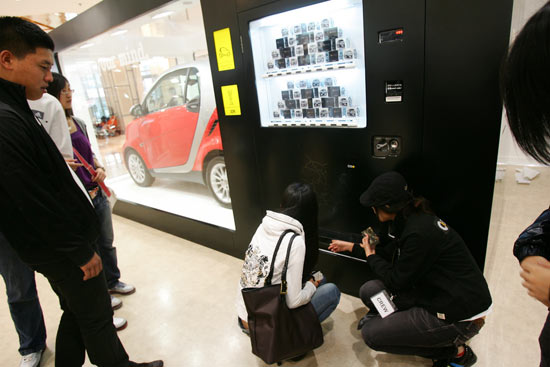 freshness is key for vending machines selling food goods. however these machines take this a little too far, offering live lobsters and fresh eggs respectively. both spotted in japan, these machines are not something you will find in your office break room. the lobster machine is also an arcade game because it requires users to pick their lobster up using a joystick-controlled claw. 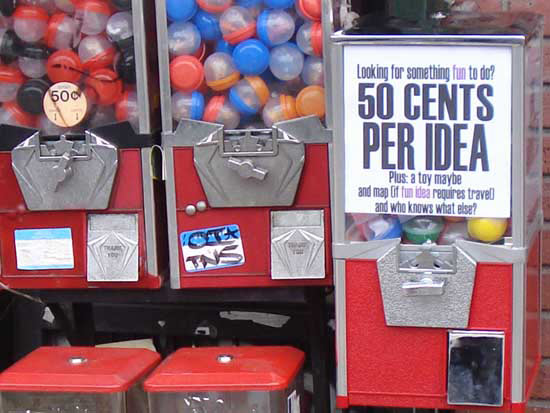 ideas for sale rather than selling a product, jake bronstein developed a vending machine that would dispense ideas. after buying an old vending machine from the internet, bronstein filled it with small capsules each with a fun thing to do in the city, a map with directions on how to get there and a small toy. he placed the machine in a variety of spots in new york and captured people’s reactions. 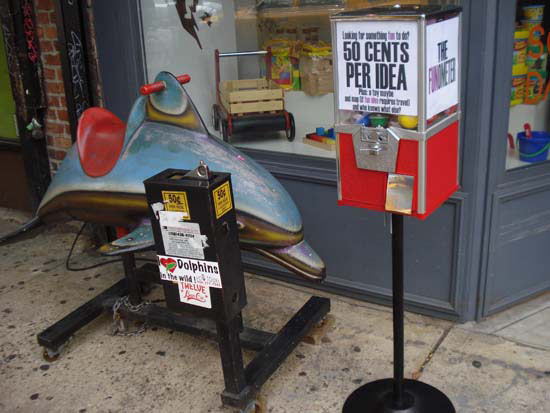 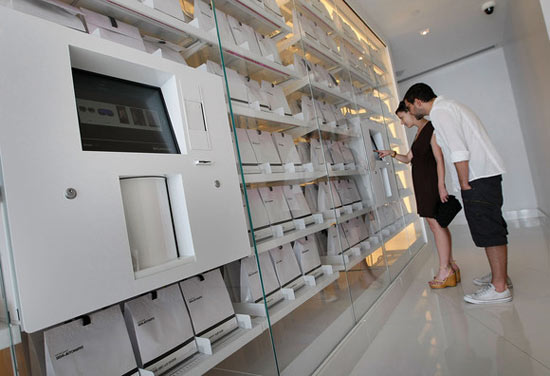 opening this past december in miami’s mondrian hotel designed by marcel wanders is this luxury vending machine by mari balestrazzi. the machine is located in the hotel’s lobby as a contemporary version of the gift shop. however this machines sell more than coffee mugs and key chains. some of the items for sale include designer gowns, luxury homes and even cars. a touch screen provides information on each item that is dispensed in the form of small vouchers which are redeemable at the front desk. larger items like cars require a non-refundable 1,500 USD deposit to take a test drive. 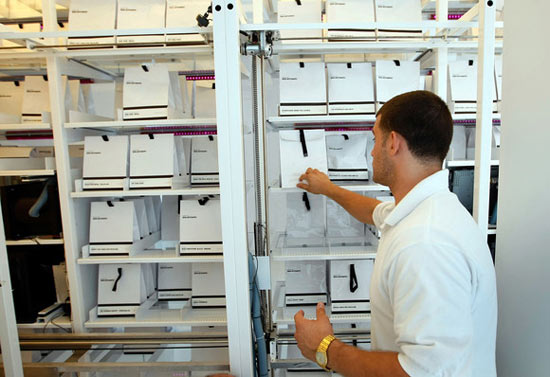 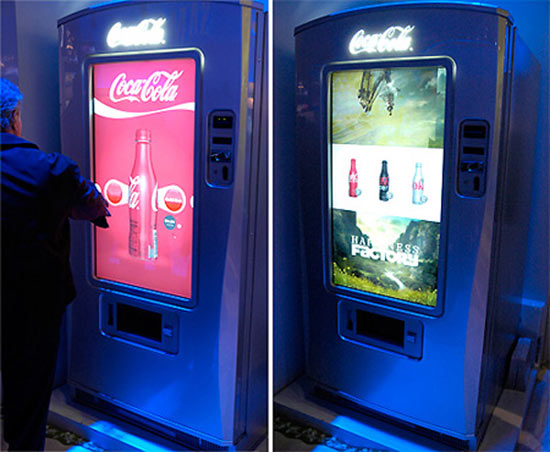 soft drinks are perhaps the most common product sold in vending machines. despite this the design of most of these machines hasn’t changed much over time. earlier this year at the 2009 CES in las vegas, samsung unveiled the new ‘uvending’ touch screen vending machine for coca-cola. the machine features slick graphics that can display ads and information about the products. the screen also allows users to make purchases using debit and credit cards using the screen as a keyboard. the machine is also networked with wi-fi to allow owners to monitor their stock and protect it from vandalism via its built-in camera.

while it is quite normal to spot a cigarette vending machine in a number of countries, a marijuana dispenser is quite rare. this vending machine is the first of its kind and was installed last year in los angles, california where medical marijuana is legal. the machine is well-protected by security guards and requires a prescription, fingerprint identification and a pre-paid credit card to buy the drugs. the machines are designed for sufferers of medical conditions such as glaucoma and cancer who have been given prescriptions for the drug by their doctor. 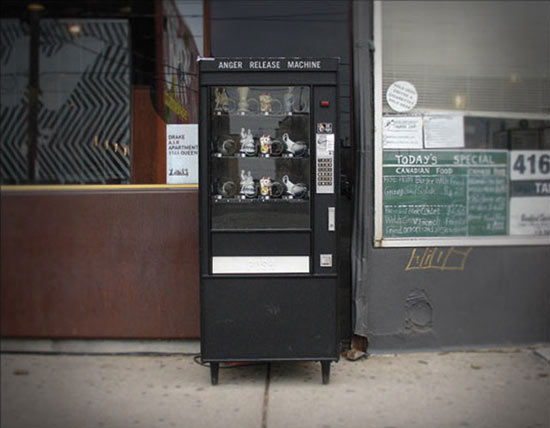 created by the artists yarisal and kublitz this unique vending machine dispenses a variety of plates and cups. however these ceramic and glass piece aren’t for eating off because after you buy an item it drops to the bottom of the machine and shatters. the idea behind the machine is to allow people to relieve their stress through the breaking of the items. 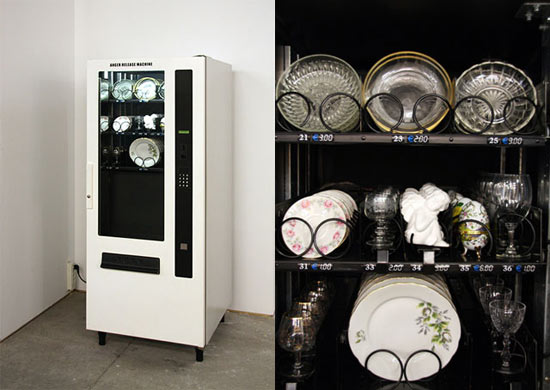 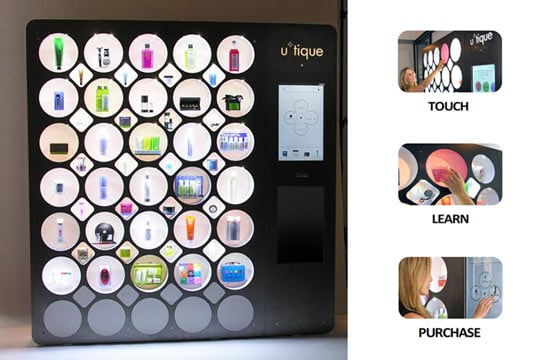 the ‘u*tique’ would best be described as a luxury vending machine; its designer russell greenberg was asked to create the ferrari of vending machines. the machine was first put to use this past february and carries a curated selection of 50 exclusive products. the company explains that the items in the machine have all been hand picked by a group of international trend hunters. the machine features a touch screen panel that gives more information about each product to the buyer. the machine stocks everything from designer jewellery to bath and beauty products. 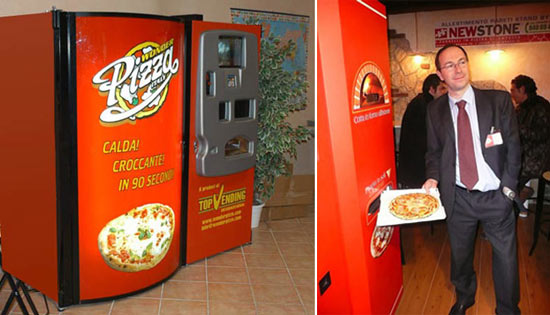 this vending machine is a pizzeria in a box. ‘the wonder pizza’ cooks 9 inch pizzas in a mere 2 minutes each. users can select their desired crispness and pick from 3 different flavours. the machine isn’t as simple as you might think. it is reported to have taken over 5 years to develop at a cost of over 6 million USD. each machine can hold around 100 pizza and uses real ovens not microwaves to cook the pizza. 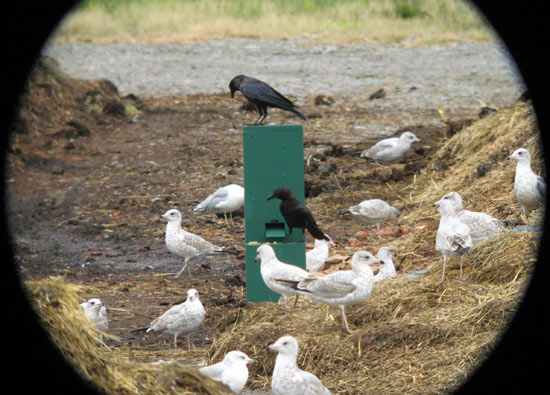 you may think that vending machines are only for humans, but joshua klein developed one that is designed for crows. the device aims to autonomously train crows to deposit coins they find on the ground into the machine in exchange for peanuts. the machine is an experiment to see how the crows learn to do these tasks and if it is possible to teach them other tasks like collecting garbage. 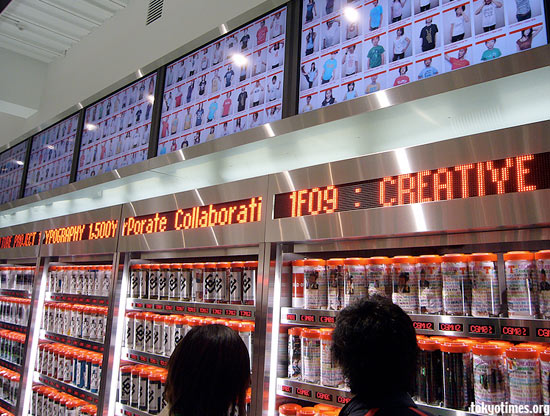 the japanese clothing retailer uniqlo has fully embraced the japanese obsession with all thing vending machine. in 2007 they opened a new location in the harajuku area of tokyo that only sold t-shirts packaged in tubes. each shirt is numbered on a giant wall of shelving, allowing buyers to select their t-shirt of choice just like a vending machine. the brand continued this idea  in 2008, when they opened a human vending machine in new york to promote their heattech apparel line. this vending machine featured a male and female model inside of the glass modelling the new shirts. each customer received a shirt from the mimes inside.

while it is common to see the standard size vending machine boxes, a new breed of machine is cropping up around the world. this particular example is in strasbourg, france and is around the size of a small shop. like a shop, this vending machine also stocks quite a large number of items that go beyond a simple soft drink and snack food. the machines feature a series of shelves which are stocked with items and a mechanical arm which grabs each purchase and delivers it to the customer.

while most vending machine sell novelty products and sugary treats, this machine sells bike parts. the ‘trek stop’ is located out side of an existing bike shop and sells everything from repair kits to power bars. in addition the station also has an air pump to inflate tires, for a price. however the kiosk doesn’t just provide the products to repair your bike it also has a television screen with video instructions, to teach users how to make repairs. while this particular machine was an experiment, this idea could be very useful in urban areas with heavy bike traffic. 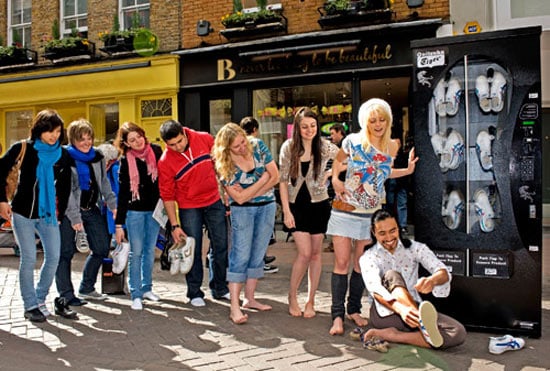 back in 2008 the japanese sports brand onitsuka tiger launched this vending machine in the UK to promote their sneakers. the vending machine was first installed on london’s carnaby street and dispensed the brand’s shoes in a choice of 6 sizes. the machine holds 24 pairs of shoes that drop once purchased. while the machine wasn’t permanent, it was a big hit with fans of the shoes and anyone who recently stepped in a puddle.

sustainability is becoming more mainstream in the vending machine business, not only in the power source but also the products they sell. this machine concept design by theo richardson, charles brill and alex williams is designed to sell batteries for portable electronics. the batteries would be a standardized size to make them as versatile as possible. the machine would dispense fully charged batteries that users could exchange for their used up ones. the idea is to solve battery waste by recharging batteries and using them multiple times. 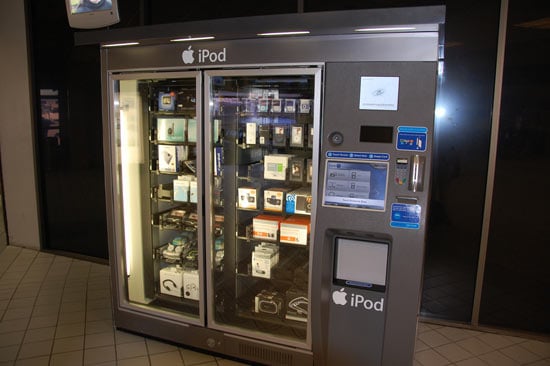 most vending machines offer a variety of low-cost consumables, but this new type of vending machine offers a range of electronics that vary from memory cards to ipods. typically located in airports, these machines provide customers with a wide range of products to fulfill their gadget hunger. while buying extra memory for your camera before your vacation seems logical, we can’t quite understand what people expect to use an ipod for if it doesn’t come with any music.