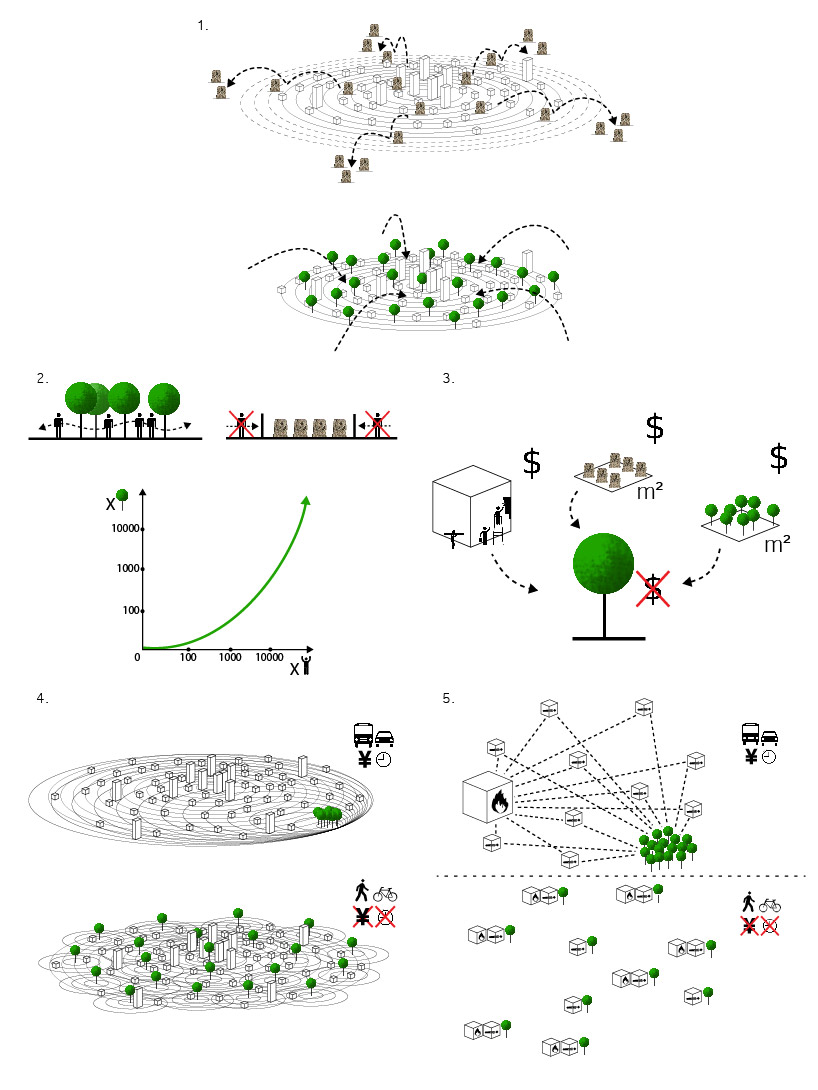 A LIVEABLE FUTURE FOR THE DECEASED by A deCocqueau from belgium

A LIVEABLE FUTURE FOR THE DECEASED
Tree-burial within city centers:
Setting the problem: Japan has an extremely high number of elderly and the busy urbanization of the after war years created a substantial problem of where to locate the deceased, and how to correctly deal with them. Also, due to Japan’s capitalistically oriented society, mortuary rites changed into expensive, over-standardized events, unworthy of the emotionally charged moment.
Matters death-related are in a crisis, indicating a cry for change. The idea developed here is a change in social view of the subject, namely from an unknown, disturbing and negatively co-notated entity (the grave: inspiring fright, apprehension and ultimately indifference) to one well-acquainted, familiar and positively co-notated (the tree: inspiring rest, regeneration and fruit of thought). Today’s stone grave cemeteries, the businesslike funeral offices, the non-committal and often poorly designed crematories and the deserted temples create a barrier between living and dead. No care has been taken of the representation of death, making its oblivion easy and its neglect general.
For the first time in history, the people concerned participated in attempting to create changes. They came up with alternatives to the cultural norm of the family stone-graves and to the funeral industry’s impositions. This work holds that the tree-burial offers the most efficient and ecologically sustainable alternative, solving many issues beyond the grave-crisis itself. The tree-burial uses the cremated remains to grow vegetation.
The overall idea is to reintegrate the deceased within the cities, their former presence now embodied by the trees, in an effort to counter the issues of space for, and distance to, the burial locations - as well as eco-issues caused by urbanization. Environmentally, the goal is to replace the large, useless, enclosed stone-cemeteries by green, open hubs, and so create an agreeable coexistence of the living and the deceased.
To do so, this proposal provides a set of indications to achieve these results pragmatically. Reusing vacancies, appearing due to the drastic expected shrinkage of the Japanese population, to implement the tree-burial is the most important. Besides this it is important to have mortuary facilities on a walking/cycling distance from everyone’s residence. The paradigm could be applied to all cities in Japan, or even to other cities in the world that are or will have to deal with like issues. To demonstrate its efficiency, this project is further on implemented to the city of Fukuoka, Kyushu (Japan).
[POSITION IMAGE 1]
Site surface: 3246m²
Height: varies; -7m ~ 3,3m
Program: tree-burial cemetery/park, crematory, funeral hall.
[POSITION IMAGE 2]
Japanese cities are congested. The number of empty spaces will increase due to the expected shrinkage of the population figures. An underground architecture offers the possibility to double the useful amount of space (IMAGE 3.1, 3.2), open up the cities, and offer a peaceful environment at large from the city’s chaos (IMAGE 3.4).
Due to its underground position, people will only be in contact with the span and the trees: these will be the symbols reminding them of their deceased. The smooth, angle-less shape accentuates the focus to the top, that is: the sky and trees (IMAGE 3.3).
The building tries to offer intimacy and coziness, but simultaneously emphasizes the earnest of the moment, responding to the people’s emotions. The use of strong, meaningful colors has the purpose to elicit the visitor’s sentiments. The colors have been chosen to suit their function (IMAGE 3.5). The interiors have been kept down to essentials. This to create as little distraction as possible and to leave room for a possibly necessary flexibility.
[POSITION IMAGE 3]
It is of great importance to create different circulation systems. One dealing with public affairs; another one with the private ones (IMAGE 4.4). People foreign to the ongoing rite, but willing to while away some free time (for instance to have a drink in the bar), can enter the building and exit it again without noticing they are in a mortuary facility. If you are involved, you are unlikely to be disturbed by strangers and intimacy fitting the occasion is guaranteed. There is a further difference between the functional and circulation areas. As mentioned, the colorful, lit spaces are meant to allow for and guide mourning and reminiscence. In contrast to these, the circulation throughway has been kept dark-colored, suggesting dignity (IMAGE 4.5). While moving from one function to another, the emotional charge is stressed.
[POSITION IMAGE 4 ]
The complex plan was designed with this in mind: In Japan, the view prevails that it is never good to walk directly to a target point. This, the Japanese believe, brings on bad luck. The length of the circulation path is also intended to accentuate the contrast between the different mortuary functions and the circulation as such (IMAGE 5).
The floor of the building is situated 7 meters below the ground. The openings above the functions are all closed off to protect from climatic circumstances, but the strong visual contact is very much present. The trees direct the play of light inside, aiming at constant contact between the deceased and the bereaved.
[POSITION IMAGE 5]
The fact that the deceased are embodied by trees will create a public, park-like space. This dynamic hub will evolve from a ‘bald’ park to a denser one over a certain period. This creates a constant revival and movement of the public space.
[POSITION IMAGE 6]
Now, the deceased have as much of an active presence within society as they are ever likely to have. Their descendants can be proud of them.
Death is there, it is terrible, but on our planet there is nothing we can do about it, so, for the sake of dead and living alike: let’s accept it – no more, no less.

(1)tree-burial within city centers ever increasing distances to burial plots(2)Cemeteries as green social hubs enclosed stone-cemeteries; Deceased will have a useful role in society.(3)Investment: divided by 3. No maintenance cost of vacancies, no need to buy up new land for green or burial extensions.(4)Centralized decentralized. advantages of a decentralized strategy: have the facilities near residences.(5)Joining the different mortuary facilities to generate easier access and usage. 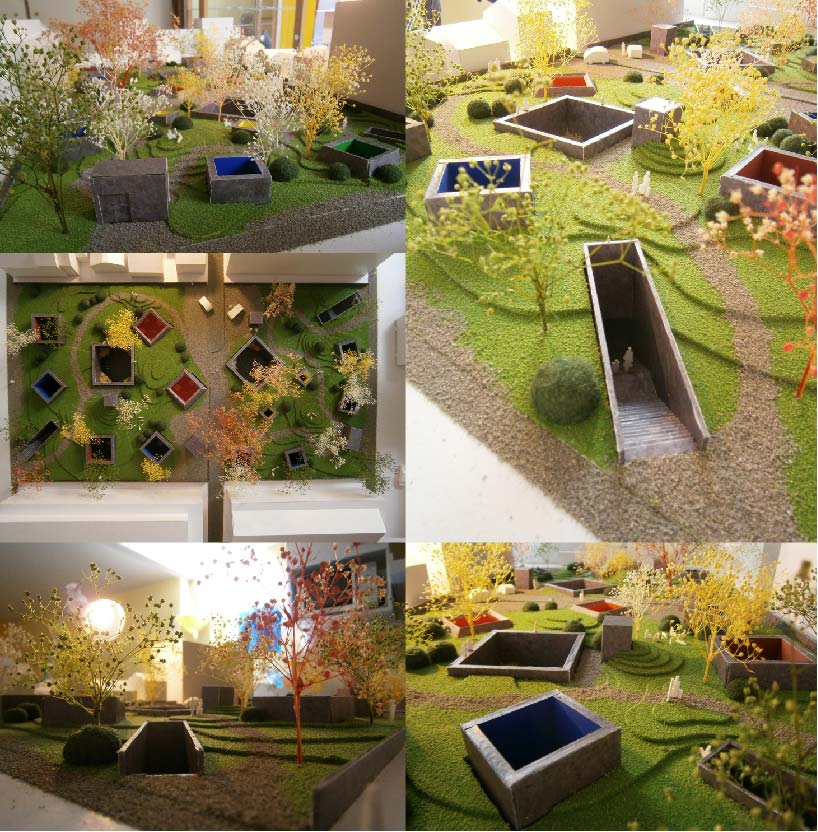 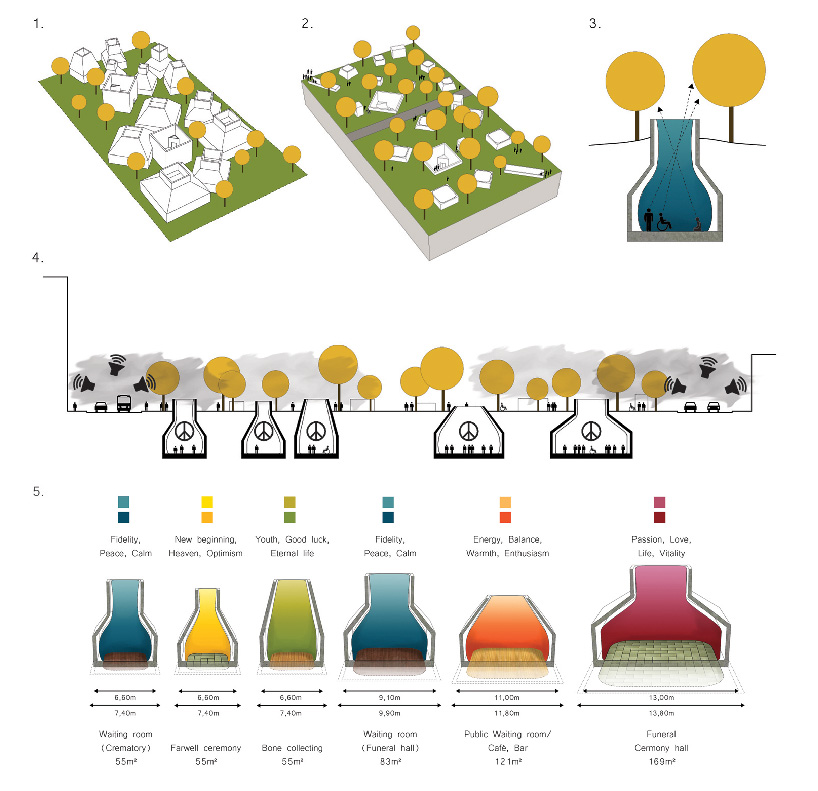 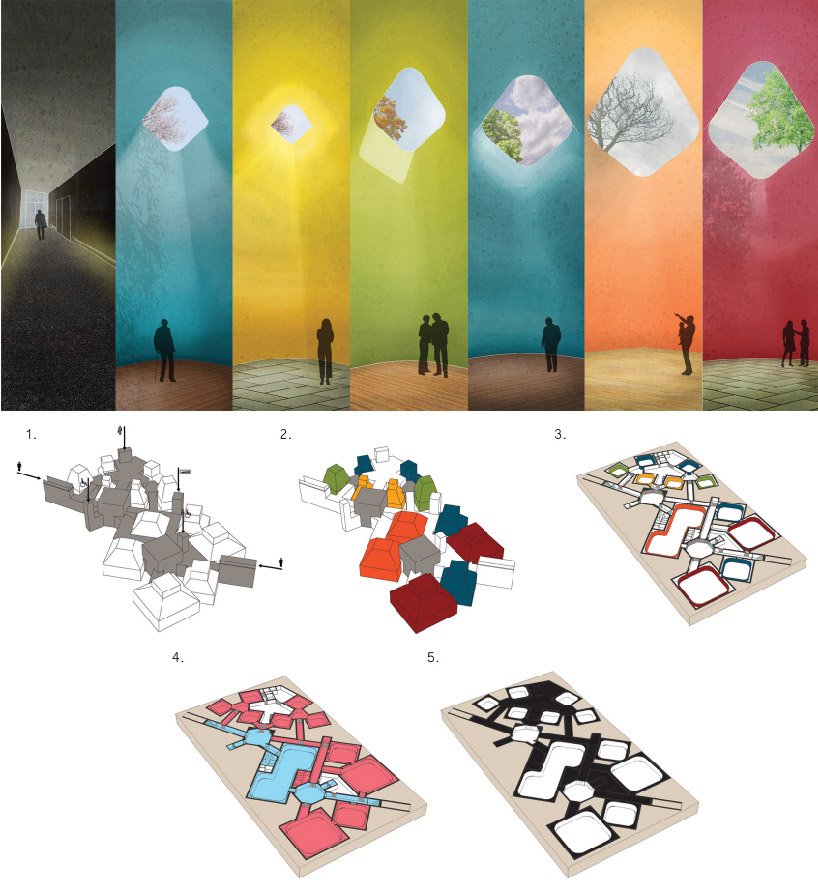 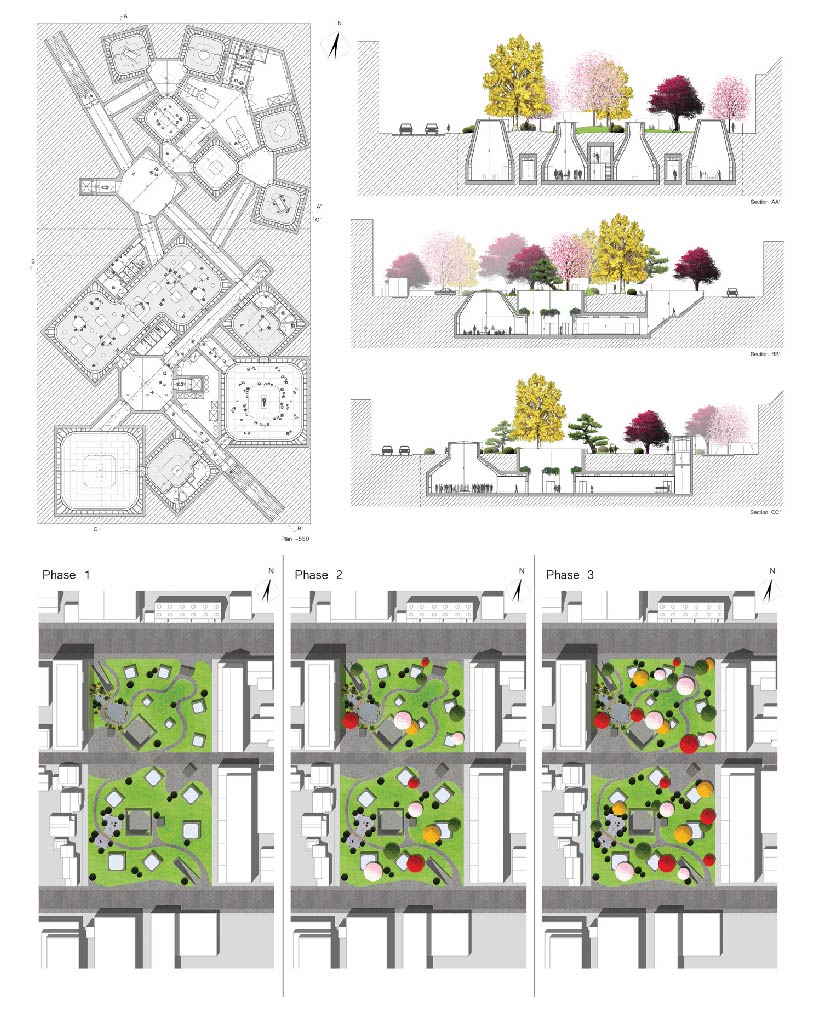 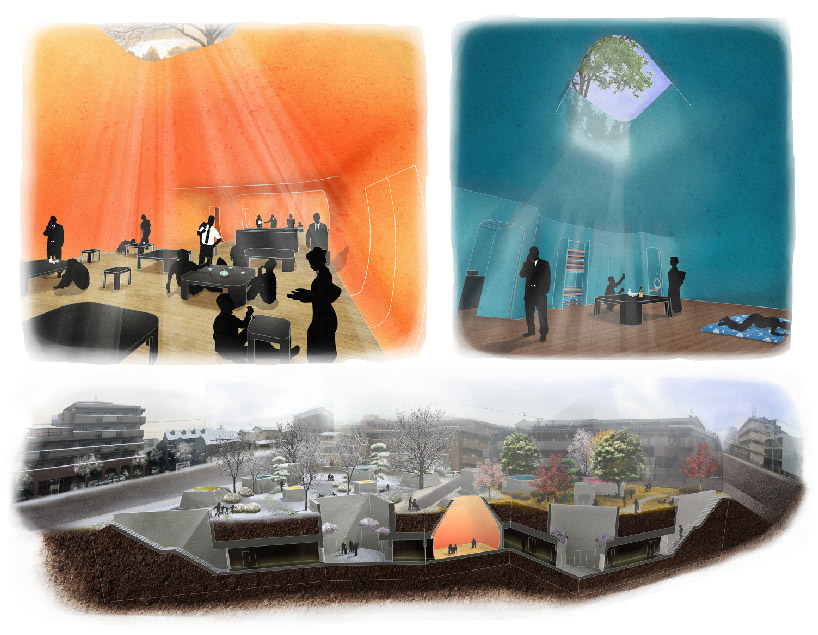