Some time ago, I we ware appealed by the idea of a cemetery without any tombstones but full of trees. Parks of memory as places of reverie and silence where each tree has its own story and its own soul. We are born, we live and we die; a new life begins on our ashes – life comes full circle. The urn not accidently has a shape of a sphere. The horizontal line cuts it in two, dividing it into two parts: life and death, the sky and the earth, the soul and the body, those who departed and those who remained. A ceramic sphere stays with those who live as a memento of the departed; the ashes are placed in the biodegradable urn and buried in the ground to become the substrate for a new life. The most important in OVO / MALA urns collection is its simplicity, form and functionality as well as its message: „Ab ovo usque ad mala” – from the eggs to the apples, from the beginning to the end. From birth to death which is a beginning for a new life.

In case of this form of burial i.e. cremation, there always exists the necessity to decide what to do with the ashes of the deceased. The traditional urn can be kept in the specially designated place in the cemetery, or in some countries where it is not prohibited by law – it can be taken home. We can also choose the ecological burial, but then we are deprived of a tangible symbol commemorating the deceased. Thanks to OVO / MALA urns, this choice ceases to be bipolar.

The urns has been designed in a way that leaves the family and friends of the deceased the possibility of making the final decision. OVO and MALA can function as a traditional urns, always allowing for the option of the ecological burial. When we choose this solution, the commemorating part of the urn can be taken home or left next to the planted tree. The ceramic halves of the sphere with the inscription , put in the ground next to the sapling, constitute simultaneously an alternative form to the traditional tombstone. There is also the possibility to personalise the urn by choosing kind of inscription and engraving.

OVO – the egg – urn for one person

OVO is divided into three main parts:
Life, Light and Memory.
After assembling, they create a sphere. The horizontal line cuts it in two, dividing it into two parts: life and death, the sky and the earth, the soul and the body, those who departed and those who remained.

Light
The ceramic part of the urn whose the main function is to protect the biodegradable part.
After taking out the container with ashes, this part of OVO changes into a candleholder.

Memory
The ceramic hemisphere constitutes a container with an individual inscription commemorating the departed. It can also serve as a memory capsule being a container for mementoes reminding us of the deceased.

Life
The biodegradable container for ashes (material: compressed peat). After closing and sealing the lid, the container is ready to be put in the ground. The hollow in the lid is a place where a sapling or a seed is placed. Thanks to that, the ashes become the substrate for the newly planted tree.

MALA – the apple – urn for two

MALA refers to the Platonic concept of two apple halves – man divided into two.
The urn is designed for two people –couples, partners, siblings. Each hemisphere is dedicated to one person. Two apple halves create a spherical urn MALA. When one of the partners dies, one of the halves is placed into a columbarium or taken home. After the death of the second person, the second hemisphere is added and the urn is complete. Two apple halves are together even after death.
Each hemisphere of MALA consists of two parts: Life and Memory
In the ceramic hemispheres there are biodegradable containers for ashes. Similarly to OVO, MALA gives us a choice what to do with the ashes: leave them in a columbarium, take home or plant a tree on the substrate from the biodegradable container, and the ceramic part can be used as a memorial or a container for mementoes.

Not everyone is ready to part with the ashes of the deceased by putting them right away deep in the ground. We are never able to predict whether in 10 years’ time there will be anyone who will take care of a traditional gravestone. Trees instead of tombstones are beautiful alternatives. 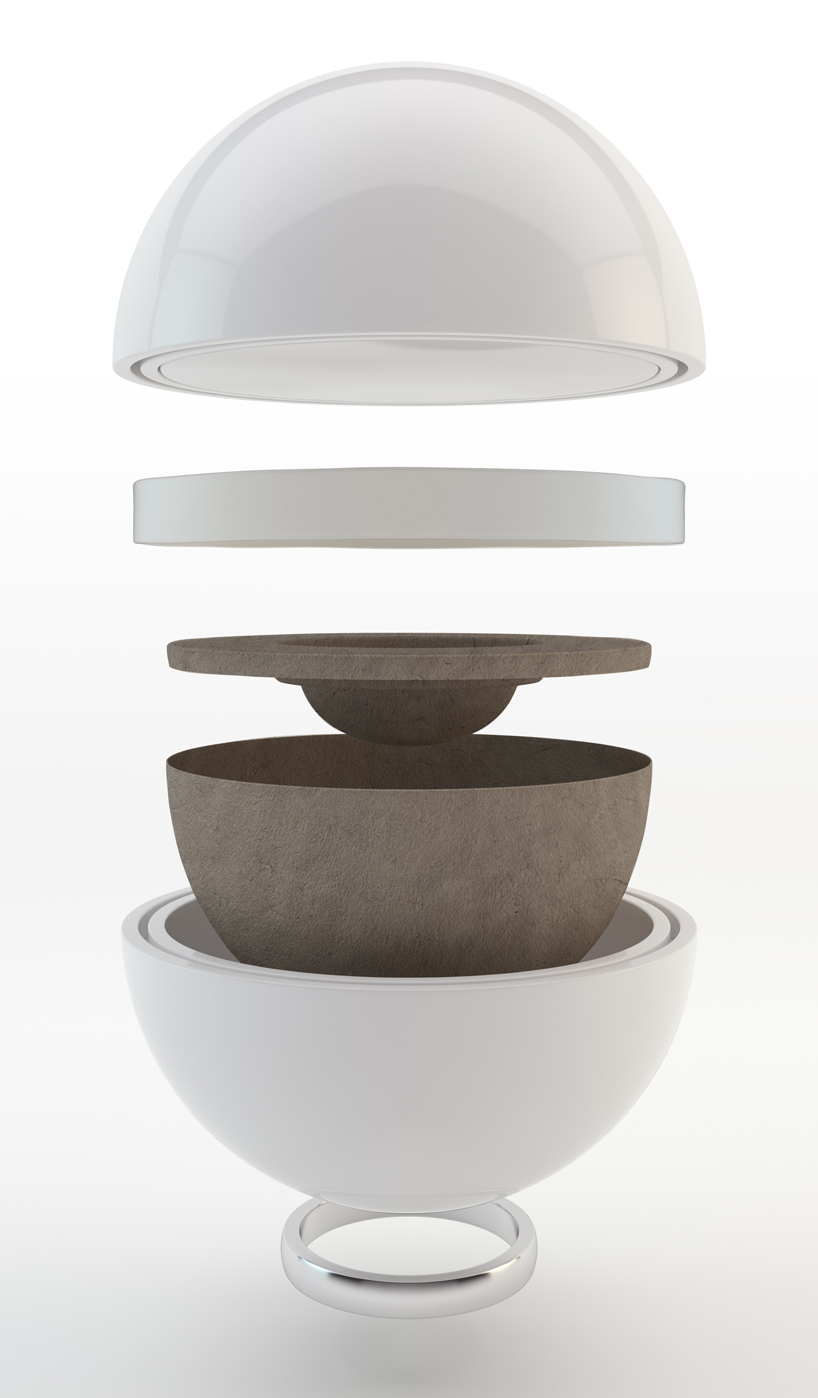 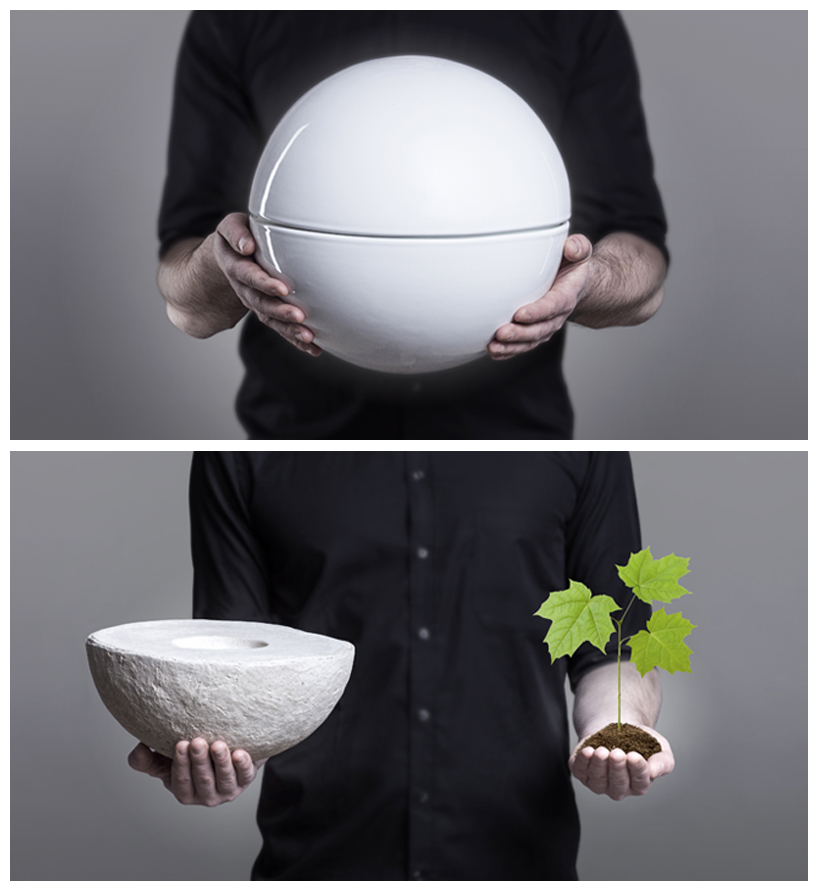 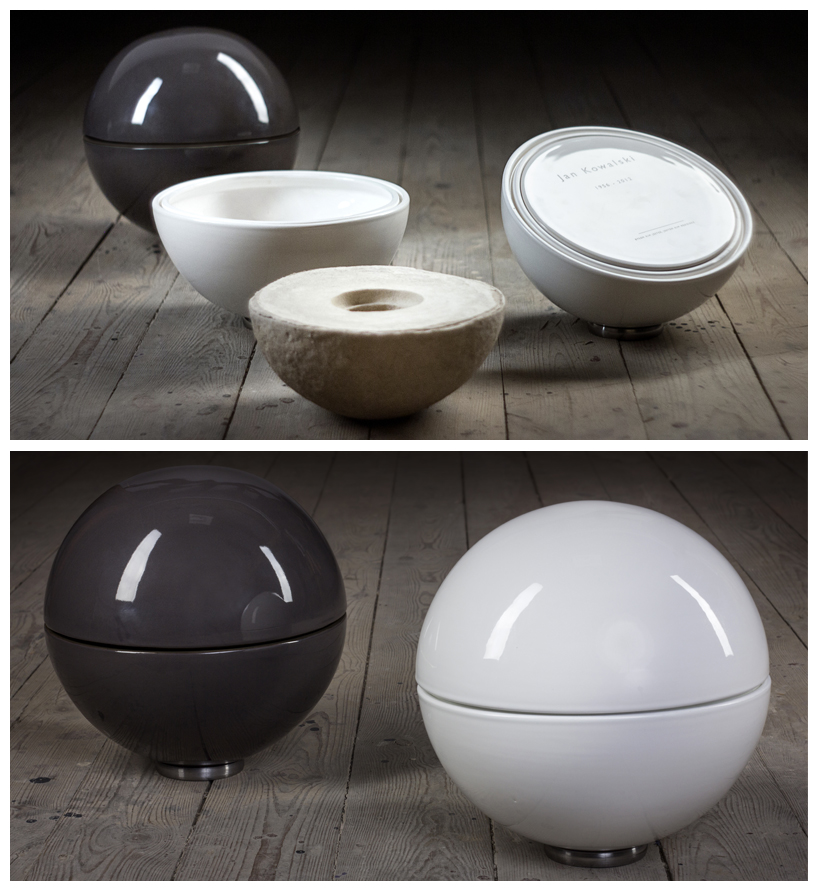 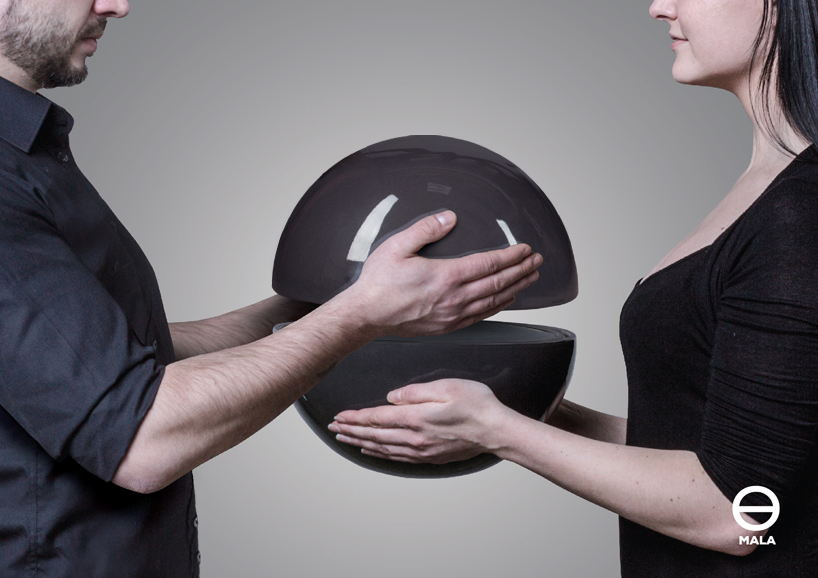 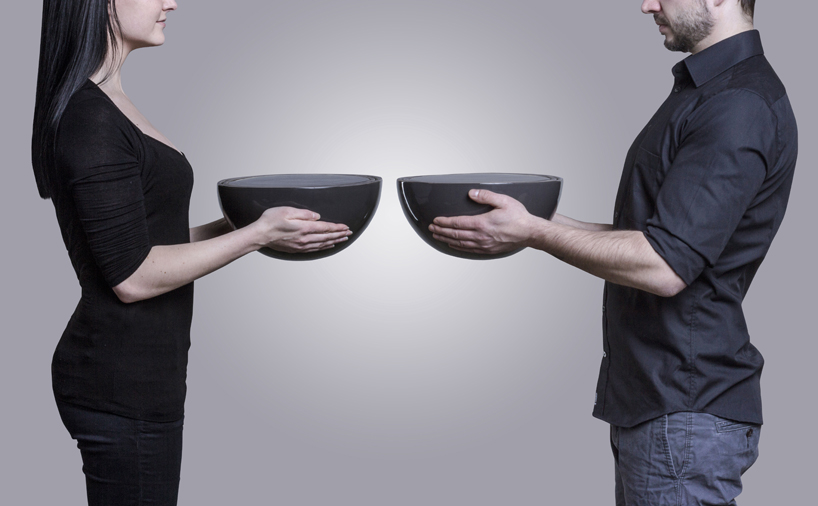